Iran President Hassan Rouhani apologized to the Ukrainian people for downing the Ukrainian plane and promised to hold those responsible for the tragedy “accountable,” according to the readout of today's call with Ukraine President Volodymyr Zelensky.

"Hassan Rouhani expressed his condolences to the Ukrainian people and the families of those killed as a result of the crash of the PS752 flight of Ukraine International Airlines. He issued an apology from the Iranian side for the tragedy that claimed 176 lives. The head of the Islamic Republic of Iran fully acknowledges that the tragedy was due to the erroneous actions of the military of this state. Official Tehran assured that all involved in the crash will be held accountable," the statement said.

According to the statement, Iran is working to repatriate the bodies of those killed in the crash by Jan. 19 and “agrees on the issue” of paying Ukraine compensations.

Iran’s admission that its armed forces mistakenly shot down a Ukraine International Airlines passenger jet in Tehran on Wednesday is a “step in the right direction,” Ukrainian President Volodymyr Zelensky said today on Twitter.

“Acknowledging plane shot down is a step in the right direction. I insist on immediately completing identification of the bodies and their return to Ukraine,” Zelensky tweeted after a call with Iranian President Hassan Rouhani.

“The perpetrators must be held accountable. We look forward to further legal and technical cooperation,” the Ukrainian president added.

Zelensky’s remarks come after the Iranian Armed Forces confirmed that flight PS752 was unintentionally hit after being mistaken for a hostile target. 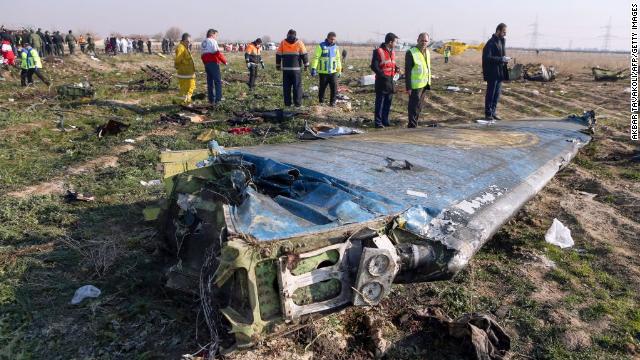 Ukraine is now investigating the downing of a Ukraine International Airlines passenger jet in Tehran by the Iranian armed forces on Wednesday as a possible case of “willful killing and aircraft destruction,” the Ukrainian General Prosecutor’s office said today in a statement.

“Based on the results of processing the data obtained as a result of cooperation with international partners and also from the Ukrainian law enforcement and experts at the site of the tragedy…the General Prosecutor's Office has decided to change the qualification of the criminal offense,” the statement said.

“The investigation will continue under the articles of the Criminal Code of Ukraine, which provide for the liability for the willful killing of two or more people and the destruction of the aircraft,” the statement added.

More context: The change in the qualification of the investigation – which had initially been treated as a "violation of traffic safety rules" and "operation of air transport resulting in death" case – follows Iran’s admission on Saturday that it mistakenly downed the flight, killing 176 people on board.

According to the General Prosecutor’s Office, the Central Investigating Department of the Security Service of Ukraine has been “instructed to conduct a pre-trial investigation” into the case.

A senior administration official had harsh words for Iran after it admitted it shot down the Ukrainian passenger plane.

“This was a terrible tragedy. Ultimately, Iran made an awful mistake. Iran’s reckless actions have again had devastating consequences. It is more important now than ever that Iran abandons its reckless ambitions and starts behaving like a normal country,” the official said.

German Chancellor Angela Merkel said it was “good that we know who was responsible” for the downing of the Ukraine International Airlines flight 752, describing Iran’s accidental downing of the passenger aircraft as “a dramatic event.”

“It’s good that we know who was responsible for it and I believe that we should work together with all nations involved in order to find solutions and have a comprehensive examination,” Merkel said at a press conference in Moscow alongside Russian President Vladimir Putin.

Two members of Canada’s Transportation Safety Board and 10 officials from Global Affairs are waiting in Ankara, Turkey for the documents.

Champagne added: “I’ve been calling the Foreign Minister of Turkey today to seek his assistance as well to make sure the Iranian embassy in Ankara would be issuing the visas as quickly as possible because we all know that in circumstances like the one we’re facing time is of the essence. Every hour matters and we are pursuing that vigorously with all the authorities and partners around the world.”

Champagne said the latest information he had as of Friday evening was that two visas have been issued, but 10 more were needed for the Canadians to move into Tehran.

The European Union has acknowledged the statements made by the Iranian authorities taking responsibility for the crash of Ukrainian International Airlines jetliner on Jan. 8.

"We deplore this tragedy which has caused the death of so many people from various countries and we reiterate our heartfelt condolences to their families and loved ones," a spokesperson for the European Union said.

The spokesperson added: "In view of the commitments given by President Rouhani, the EU expects that Iran will continue to cooperate fully and undertake a comprehensive and transparent investigation, which should abide by international standards, into how this tragedy occurred. Appropriate measures need to be taken to ensure that such a horrible accident can never occur again."

United Kingdom Prime Minister Boris Johnson said today that Iran’s admission that PS752 was shot down by mistake was “an important first step” and that a transparent investigation was now needed.

“Iran’s admission that Ukraine International Airlines Flight 752 was shot down by mistake by its own armed forces is an important first step,” Johnson said in a statement.

Johnson added: “We now need a comprehensive, transparent and independent international investigation and the repatriation of those who died. The UK will work closely with Canada, Ukraine and our other international partners affected by this accident to ensure this happens."

The statement went on to say that “this tragic accident only reinforces the importance of de-escalating tensions in the region. We can all see very clearly that further conflict will only lead to more loss and tragedy. It is vital that all leaders now pursue a diplomatic way forward.”

Germany’s foreign minister has called on Iran to “deal with this terrible catastrophe” after the general staff of Iran’s armed forces admitted Saturday that Iran had mistakenly shot down a Ukrainian passenger jet on Wednesday, killing 176 people on board.

“It is important that Iran has been clear about flight PS752. Tehran should take steps to deal with this terrible catastrophe so this cannot happen again,” Heiko Maas said today via Twitter.

“Our thoughts are with the victims and the bereaved,” he added.

The Foreign Minister’s remarks come ahead of a meeting between German Chancellor Angela Merkel and Russian President Vladimir Putin in Moscow on Saturday, in which the two leaders are expected to discuss the ongoing crisis in the Middle East.