In his address on Iran’s strikes on US targets in Iraq, President Trump told his European allies that it was time for them to wake up to the fact that the nuclear deal was a disaster.

“Iran’s hostilities substantially increased after the foolish Iran nuclear deal was signed in 2013,” Trump said. “Instead of saying thank you to the United States, they chanted ‘Death to America.’ In fact, they chanted ‘Death to America’ the day the agreement was signed. They Iran went on a terrorist spree funded by the money from the deal and created hell in Yemen, Syria, Lebanon, Afghanistan and Iraq.”

He called out Germany, France, the United Kingdom, Russia and China — five of the eight signees to the Joint Comprehensive Plan of Action, also known as JCPOA or the Iran nuclear deal. (The other three were the European Union, Iran and of course the US, which under Trump has withdrawn from the agreement.)

The face-off between the US and Iran has put Trump’s European allies in an incredibly tight spot.

The JCPOA was considered a European success — and the only real foreign policy success of the European Union. It wasn't just a success on the grounds that it poured cold water on US-Iran tensions. It also provided Europe with a forum in which it could navigate its major priority in foreign policy: keeping a balance between the US and China.

China is very important economically to Europe. Its inward investment is welcomed across Europe, but especially in the continent’s struggling southern economies. China, meanwhile, is more than happy to increase its importance in the world's single largest economic bloc.

China also has historically good relations with Iran. And for those who've been paying attention, the thing China and Iran both have in common is that Trump is doing his best to poke both in the eye.

Here's what this all means: Asking Europe to stand by America in its scrap with Iran is asking it to pick a side: does it try to keep its new friends in Beijing and Tehran happy? Or does it stand by its old ally, despite the fact it’s led by a man that many European diplomats privately admit is so erratic that he gives them sleepless nights and might not even be in power next year? 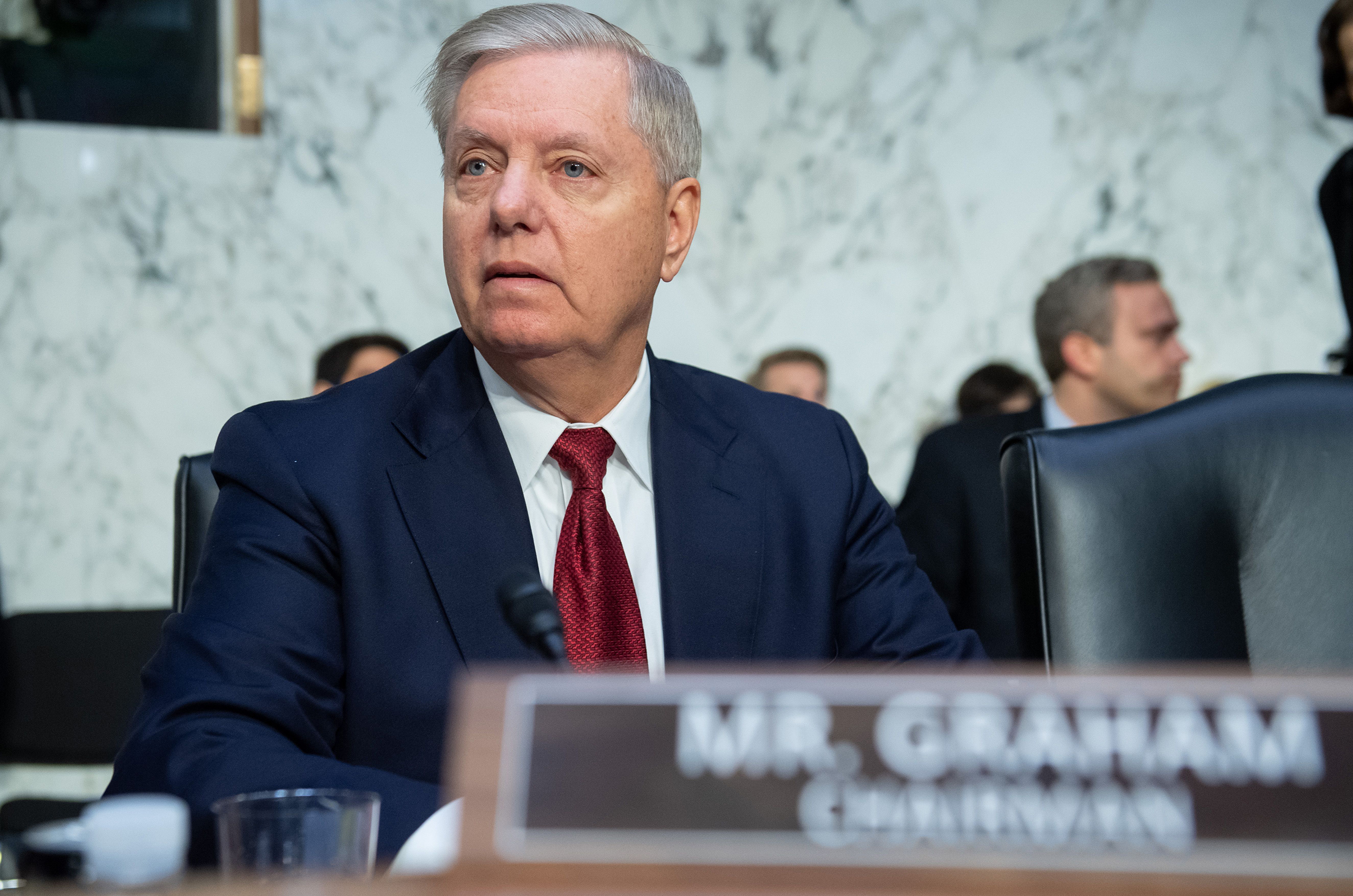 “A homerun speech by President Trump about the challenges we face with Iran. It was measured and firm," said Graham, a close ally of Trump.

Read the rest of Graham's statement:

“To the Iranian people: President Trump laid out a pathway forward for peace and prosperity. I hope you take it.
To the world: President Trump correctly identified the 40 year history of Iranian hostility and destabilization of the region. I hope you will help President Trump change the regime’s behavior so we can avoid a war.
To the American people and Congress: What President Trump is seeking from Iran is to end 40 years of tyranny, to stop them from being a state sponsor of terrorism, and to abandon their nuclear weapons program once and for all.
All Americans should support President Trump’s efforts to resolve the threat from Iran peacefully and fully understand the Maximum Pressure campaign must continue with a credible military component.”

Oil prices fell sharply today, reversing the initial panic spike caused by fears of a deeper conflict between the United States and Iran.

Trump confirmed that no Americans were harmed in that attack, and rather than signaling a US military response, Trump vowed to impose new sanctions on Iran.

Trump also claimed, as he has before, that the deal "expires shortly anyway." While the word "shortly" is subjective, and while some provisions of the agreement are scheduled to expire in five years, some provisions are indefinite. Others run to 2035 and 2040.

"It's not accurate to say the deal expires," said Naysan Rafati, Iran analyst at the International Crisis Group, told CNN in July. "Certain clauses of the deal expire and a lot of the key clauses don't expire."

The deal includes important sunset clauses. Its limits on the number of first-generation centrifuges Iran can possess, and on the research and development of more advanced centrifuges, are scheduled to end in 2025. The 3.67% uranium purity limit is to end in 2030.

So is the 300-kilogram limit on Iran's stockpile of low-enriched uranium, which Iran said last week it has now broken. And so is the ban on building a new heavy-water reactor and on reprocessing spent fuel, which effectively bars Iran from developing a plutonium weapon.

However, some of the limits in the deal extend past 2030 — and some do not expire at all. Centrifuge production sites are to be under continuous surveillance until 2035. Iran's uranium mines and mills are to be monitored until 2040.

Iran is permanently required to provide advance notice of plans to build a nuclear facility. Iran promised that it will not "ever" seek a nuclear weapon. And the International Atomic Energy Agency monitoring of Iran's nuclear activities is to continue indefinitely.

The military escalation appears to be over.

Trump decided to lean on the only "minimal damage" inflicted and unleashed threats. But he only had one practical response: more sanctions.

Moments ago, Trump announced his administration will hit Iran with new sanctions in the wake of its attack on two Iraqi military bases housing US troops.

It is unclear what new sanctions will be unveiled and, after years of punishing blockades being built up, what new measures can actually apply pressure on Iran. After the Saudi oilfield attacks, similar sanctions were pledged and experts even then were unclear what impact was left for the US to have on the already beleaguered economy.

Trump also asked Europe to get behind his maximum pressure campaign and NATO to get more involved with Middle East peace. He said that the US had new hypersonic weapons to unleash if needed.

Iran would never have a nuclear weapon, he began by saying, and the deal intended to prevent that, he added, actually released money that Iran used to get the very weapons used last night. Most of his praise was for the military's preparedness and the early warning system that saved American lives.

"We continue to evaluate options" he said. But an immediate military response won't be one of them.

Here's the bottom line: Trump appears to have taken the off-ramp that last night's mostly theatrical strikes gave him. But he still has to deal with the longer term, and now exaggerated angry threat Iran poses, if it exacts a bloodier revenge over time, more covertly.

President Trump moments ago repeated an oft-repeated assertion that Iran was "given $150 billion" by the 2015 nuclear agreement signed by the Obama administration.

Facts first: That figure is an exaggeration. And the money in question wasn't American.

The US had agreed to unfreeze a significant sum of Iran's assets that had been frozen in international financial institutions, predominantly outside the US, because of sanctions against Iran.

Trump did not pull the $150 billion figure out of thin air: Obama himself mused in a 2015 interview about Iran having "$150 billion parked outside the country." But experts on Iran policy, and Obama's administration, said that the quantity of assets the agreement actually made available to Iran was much lower.

In 2015, Treasury Secretary Jack Lew put the number at $56 billion. PolitiFact reported that Garbis Iradian, chief economist at the Institute of International Finance, put it at about $60 billion. Adam Szubin, a senior Treasury Department official, testified to Congress in 2015 that the "usable liquid assets" would total "a little more than $50 billion." The rest of Iran's foreign assets, he said, were either tied up in "illiquid" projects "that cannot be monetized quickly, if at all, or are composed of outstanding loans to Iranian entities that cannot repay them."

Trump was more accurate on Wednesday when he claimed Iran had been given $1.8 billion "in cash." The Obama administration did send Iran $1.7 billion — $400 million plus interest — to settle a decades-old dispute over a purchase of never-delivered US military goods Iran made before its government was overthrown in the Islamic Revolution of 1979.

President Trump just finished addressing the nation on the Iran crisis. The President spoke for about 10 minutes and didn't take questions from reporters afterward.

Here are the key things we learned in his address:

President Trump announced his administration will hit Iran with new sanctions in the wake of its attack on two Iraqi military bases housing US troops, as well as in response to its broader aggression in the region.

He noted that his administration is continuing to review other options to respond to the Iranian missile strikes.

"These powerful sanctions will remain until Iran changes its behavior,” Trump said. “In recent months alone, Iran has seized ships in international waters, fired an unprovoked strike on Saudi Arabia and shot down two American drones."

President Trump ended his remarks on the Iran crisis, which lasted about 10 minutes, with a message to the people of Iran.

"Finally, to the people and leaders of Iran, we want you to have a future and a great future, one that you deserve," Trump said. "One of prosperity at home and harmony with the nations of the world.

"The United States is ready to embrace peace with all who seek it," Trump added.

He did not take questions as he left the room.