Defense Secretary Mark Esper told CNN today that Turkey and its allies may be liable for war crimes in Syria.

“I’ve seen the reports as well, we’re trying to monitor them, they are horrible, and if accurate — and I assume they are accurate – they would be war crimes,” Esper told CNN’s Christiane Amanpour during an exclusive wide-ranging interview at Prince Sultan Air Base in Saudi Arabia.

“I think those responsible should be held accountable. In many cases, it would be the government of Turkey," he added.

Esper was responding to a question regarding alleged human rights abuses by Turkish-aligned forces in northern Syria. In her questioning, Amanpour described an account of the alleged torture and murder of a female Kurdish politician, before raising an ongoing UN investigation into Turkey’s potential use of white phosphorus against civilians in Syria.

A report from Amnesty International published on Saturday alleged that Turkish military forces and Turkey-backed Syrian armed groups may have carried out war crimes in northeast Syria during the recent incursion.

President Trump has authorized $4.5 million in aid for the Syria Civil Defense, according to White House press secretary Stephanie Grisham.

In a statement today, Grisham said the funding would continue US support for "the organization’s important and highly valued work in the country."

"Over the course of the 8-year conflict in Syria, the SCD has rescued more than 115,000 people, including many ethnic and religious minorities. The United States encourages our allies and partners to join us in our support for the SCD and in our efforts to protect civilians, religious and ethnic minorities, and other innocent victims of the Syrian conflict," she said in the statement.

In a copy of a resolution obtained by CNN that Mitch McConnell is introducing in the Senate, the GOP leader will lay out a measure that tries to tie the hands of the commander-in-chief by requiring the Trump administration report to Congress that ISIS and al Qaeda have been defeated before pulling US troops out.

Congress “calls upon the President to certify whether conditions have been met for the enduring defeat of al Qaeda and ISIS before initiating any further significant withdrawal of United States forces from the region.”

At least 21 civilians have been killed and 27 others injured since the US and Turkey announced a five-day break in fighting in northern Syria, according to the Kurdish Red Crescent.

"Since the ceasefire, we documented 21 civilians dead and 27 injured," a statement from the Kurdish Red Crescent released Tuesday said. "Not counted are all those who remains under the destroyed houses, got kidnapped or executed by the allies of Turkey."

The Kurdish Red Crescent, a humanitarian group, said the humanitarian situation has worsened as displacement camps are overcrowded and there is a shortage of shelters, food, medicine and water.

Since the Turkish military offensive began in Syria, about 200,000 people have been displaced to southern areas, according to the Kurdish Red Crescent.

The Kurdish Red Crescent also accused the international community of not taking steps to "reduce this catastrophe."

The "ceasefire" agreement — referred to as a "pause" by Turkey — is scheduled to end today. 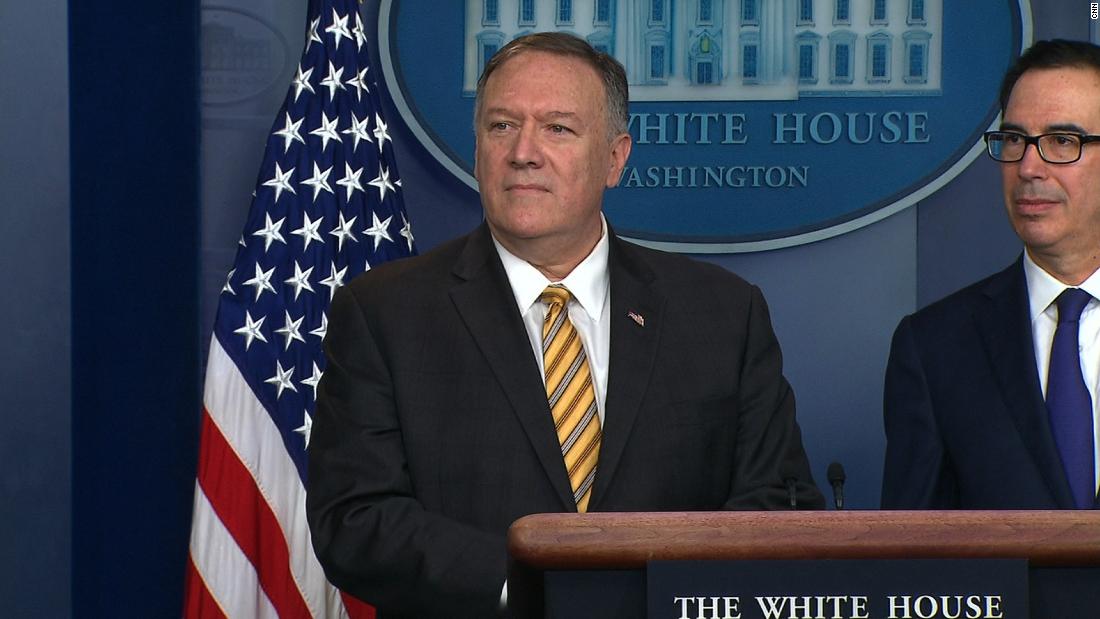 Secretary of State Mike Pompeo claimed that “some progress has certainly been made” ahead of the 120-hour deadline of the ceasefire agreement negotiated between US and Turkey.

Pompeo, speaking at the Heritage Foundation President’s Club Meeting, did not go into details, suggesting he would elaborate later in his remarks.

“The truth was that it was not in Turkey’s interest as a NATO ally to continue with that incursion. The truth was that our invasion set back our shared fight against ISIS. We think now we’re in a better place,” Pompeo said.

“The President used America’s economic might, our economic power, to avoid a kinetic conflict with a NATO ally,” he continued.

Pompeo claimed that the Trump administration’s work to build out the D-ISIS coalition “never gets talked about.”

“The work that we did to build out that team, united around the destruction of the caliphate in Syria and Iraq, was important and effective,” he said.

Pompeo acknowledged that the Kurdish forces “were great warriors” — but reiterated that the US is “mindful” that Turkey has “legitimate security concerns” with the PKK. 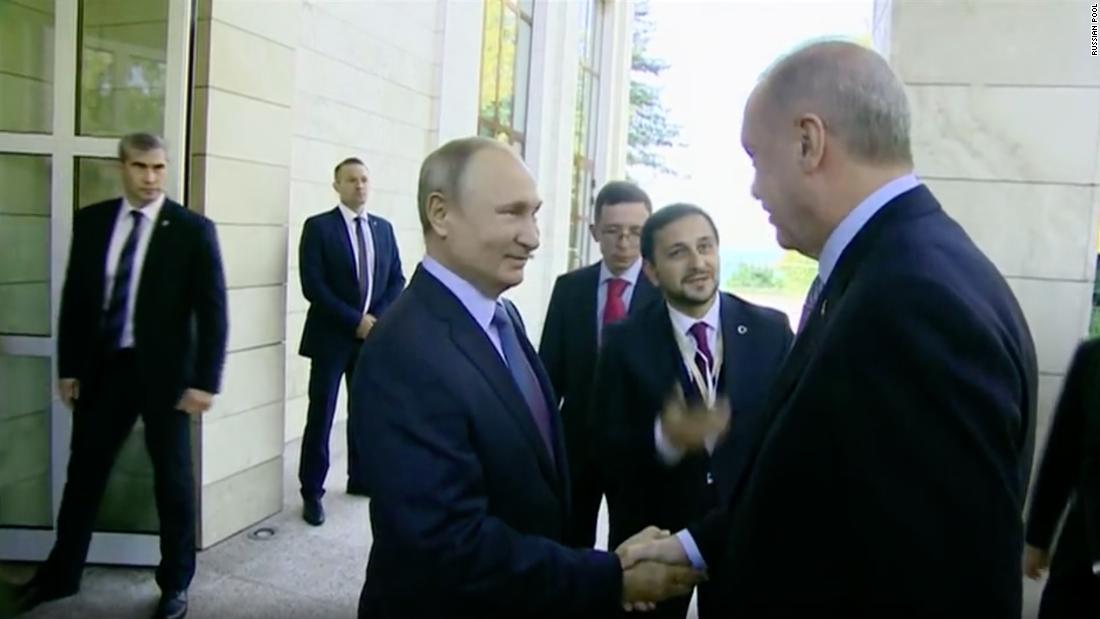 The two were seen shaking hands ahead of the news conference.

You ca watch the news conference in the play at the top of this page. 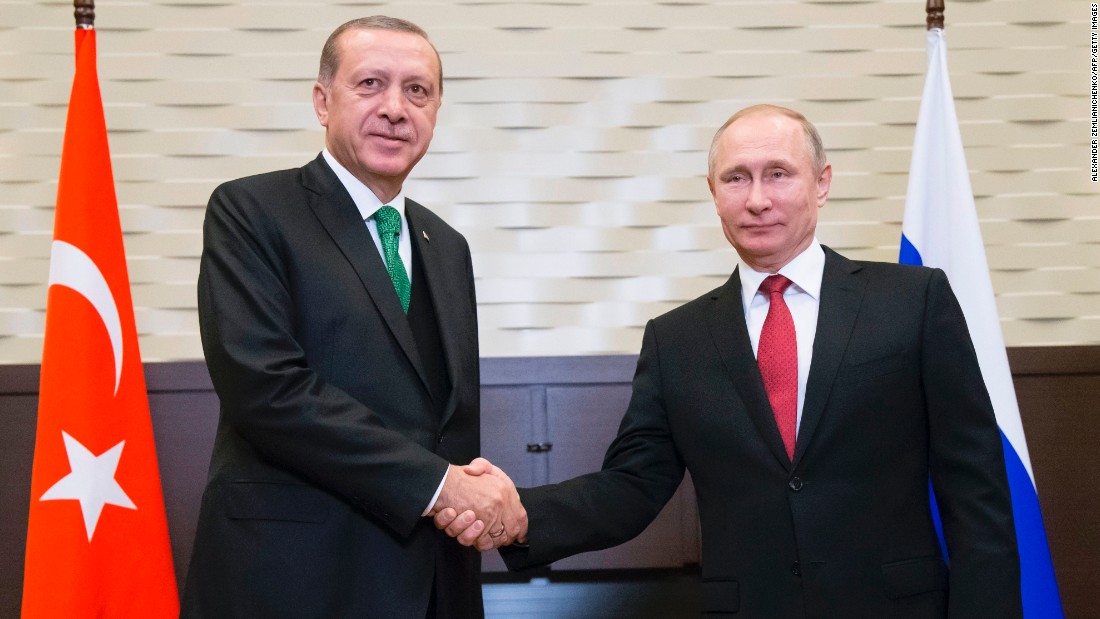 Kremlin spokesperson Dmitry Peskov today declined to speculate on whether a five-day break in fighting in northern Syria would be extended — but indicated the matter might be addressed in talks later in the day between Russian President Vladimir Putin and Turkish President Recep Tayyip Erdogan in the southern Russian city of Sochi.

The US and Turkey last week announced a five-day break in fighting, referred to as a “ceasefire” by Washington. Asked whether the pause would be extended, Peskov said:

“The Turkish side should be asked this. … it was an agreement that was reached in Ankara between the representatives of the USA and Turkey. Today there will be an exchange of information between the two presidents of Turkey and Russia. After the talks, there will be a press conference, where they will probably clarify.”

Asked whether Russia is ready to allow the Turkish military to remain in Syria, Peskov said that was a matter for the government Syrian President Bashar al-Assad.

“You know that the only armed forces that are legitimately located in Syria at the request of the Syrian leadership are the armed forces of the Russian Federation,” he said.

Talks on Syria have begun in the Russian city of Sochi between President Vladimir Putin and his Turkish counterpart Recep Tayyip Erdogan.

Earlier, the Kremlin declined to speculate on whether the five-day break in fighting in northern Syria, which is due to end today, would be extended.

But it added that the matter might be addressed in discussions between Putin and Erdogan later.

Iraqi officials have said that US troops withdrawing from Syria do not have approval to remain in Iraq, contradicting US Defense Secretary Mark Esper’s comments on Monday that American forces leaving Syria will be repositioned into the west of Iraq.

The Iraqi Joint Operations Command said in a statement Tuesday that all US troops that have withdrawn from Syria have received approval to enter the Kurdish region of Iraq and then leave Iraq.

“No approvals have been issued for those (US) forces to remain inside Iraq,” the statement added.

US President Donald Trump earlier announced that "United States troops coming out of Syria will now redeploy and remain in the region to monitor the situation and prevent a repeat of 2014, when the neglected threat of ISIS raged across Syria and Iraq."

It remains unclear what the Iraqi statement means as some US troops do have permission to be stationed in Iraq and could simply switch out with those who were previously deployed in Syria.