US says Turkey agrees to a ceasefire in Syria

James Jeffrey, the US Special Envoy for Syria, said the agreement that pauses Turkey’s military operation will be focused on “those areas where the Turks had penetrated into northeast Syria."

The Kurdish forces who once allied with the US in the fight against ISIS will withdraw over the coming days, he said.

It still remains unclear how this agreement will be implemented, and what the situation in that area will look like in the future.

“The Turkish army has seized a great deal of territory in a very short period of time,” Jeffrey told reporters traveling with Secretary of State Mike Pompeo.

Jeffrey also acknowledged the difficulty the Kurds face in the wake of the agreement.

Asked about the Turkish government’s assertion that the agreement was not a ceasefire agreement, Jeffrey said “we use the word ceasefire, the Turks do not because it's not in the agreement. What we mean is, and we define this very carefully, a ceasefire is no forward movement of troops on the ground and no military action other than self-defense."

Speaker of the House Nancy Pelosi and Senate Minority Leader Chuck Schumer, both Democrats, issued a statement this afternoon on President Trump’s decision to eliminate sanctions on Turkey in exchange for a ceasefire in Syria.

“President Trump is flailing. The President’s decision to reverse sanctions against Turkey for brutally attacking our Kurdish partners in exchange for a sham ceasefire seriously undermines the credibility of America’s foreign policy and sends a dangerous message to our allies and adversaries alike that our word cannot be trusted,” the lawmakers said.

Read the rest of their statement:

"President Erdogan has given up nothing, and President Trump has given him everything. The Turks have stated that ‘this is not a ceasefire,’ and made clear that they ‘will pause the operation for 120 hours in order for the terrorists to leave’ — referring to the courageous Kurdish fighters who have suffered nearly 11,000 casualties in our fight to defeat ISIS. This agreement also does nothing to stop thousands of ISIS prisoners from escaping, and shows the President’s complete lack of strategy to defeat ISIS. To say that Turkey and Syria will guard the prisoners is outrageous and puts our homeland security at risk. ISIS is still a threat, certainly now more than before President Trump gave Erdogan the green light to invade Syria.

President Trump unleashed a further escalation of chaos and insecurity in Syria that has left dozens of innocent civilians dead, displaced hundreds of thousands more and invited the resurgence of ISIS. The only beneficiaries of the President’s policies are our adversaries: ISIS, Bashar al-Assad, Vladimir Putin and Iran. Today’s decision further makes the argument that President Trump doesn’t see Putin as the danger he is to our country.

Yesterday’s overwhelming bipartisan 354-60 vote in the House to oppose the President’s decision and demand a clear ISIS strategy yesterday was an important step, and the Senate should do the same immediately.  Next week, the House will pass a strong, bipartisan sanctions package to work to reverse the humanitarian disaster that President Trump unleashed in Syria. Our service members, our allies and our partners all suffering from the Syrian conflict deserve smart, strong and sane leadership from Washington.”

A commander with the Turkish-backed, rebel Syrian National Army (also called the Free Syrian Army) tells CNN they have received instructions to stop any military operations and stop advancing in Syria.

“I have now received instructions to stop any operation or advance. But, we are allowed to respond if fired upon by Kurdish units," the commander said.

What we know: Vice President Mike Pence said Turkey has agreed to a ceasefire in Syria. General Mazloum Abdi, commander of the Syrian Democratic Forces (SDF), said the SDF is ready to abide by the ceasefire and will do what is necessary to achieve it.

The Syrian Democratic Forces (SDF) called on Turkey to commit to the ceasefire in a statement today.

The statement, issued by the General Command of SDF, goes on to say that it will abide by the ceasefire, which went into effect at 3 p.m. ET.

General Mazloum Abdi, commander of the Syrian Democratic Forces (SDF), said the SDF is ready to abide by the ceasefire and will do all that is necessary to achieve it, according to Syrian Democratic Council co-chair Majdoleen Hassan who sent CNN the interview transcript.

Abdi told Kurdish television channel Ronahi TV in a phone interview that the "US gave us guarantees," after vowing the SDF would do all in their power to ensure a ceasefire.

About the ceasefire: Vice President Mike Pence said the US and Turkey reached an agreement to suspend the Turkish military offensive in Syria. The US will not impose further sanctions on Turkey as part of the agreement, he said.

What we know: Pence said Turkey has agreed to a ceasefire in Syria. But Turkish Foreign Minister Mevlut Cavusoglu said the agreement between the US and Turkey is not a ceasefire.

"We will pause, this is not a ceasefire. A ceasefire can only be between two legitimate entities," he said.

The deal made with Turkey is "essentially validating" the Turkish offensive, a senior US official told CNN.

"This is essentially the US validating what Turkey did and allowing them to annex a portion of Syria and displace the Kurdish population,” the official said.

“This is what Turkey wanted and what POTUS green lighted. I do think one reason Turkey agreed to it is because of the Kurds have put up more of a resistance and they could not advance south any further as a result. If we don’t impose sanctions then Turkey wins big time." 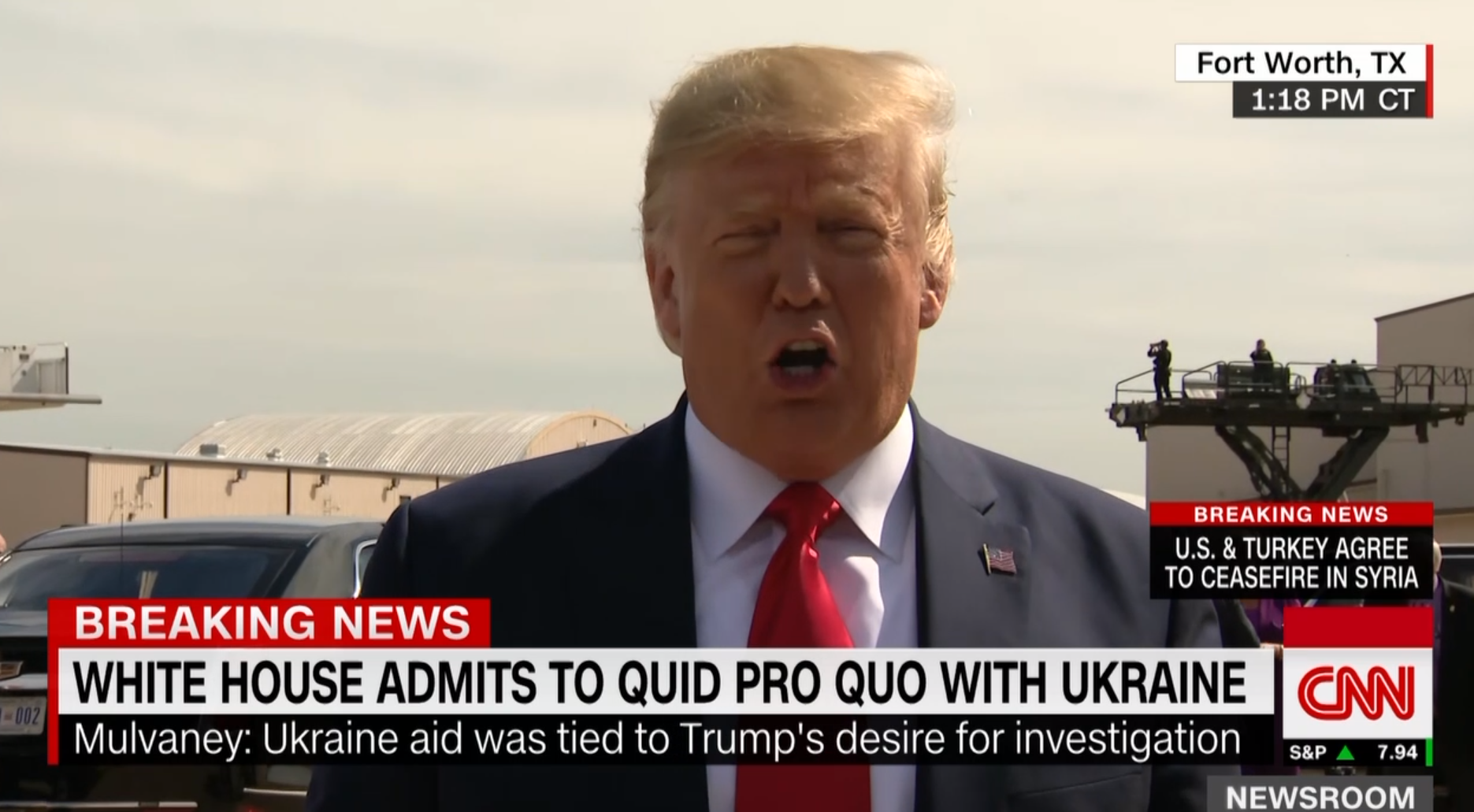 President Trump, speaking this afternoon from the tarmac at Naval Air Station Joint Reserve Base in Forth Worth, called the US-announced ceasefire in Turkey an "incredible outcome" that saved lives.

However, Turkish foreign minister said this is "not a ceasefire" but said they will "pause the operation" in Syria.

About the terms of the ceasefire: As part of that agreement, the US convinced the Syrian Kurds/SDF to dismantle their defensive fortifications and pull troops from the border to appease Turkey.

The US also conducted joint patrols and shared intelligence with the Turkish military as part of that arrangement.

Turkish Foreign Minister Mevlut Cavusoglu said the reached agreement between the US and Turkey to suspend military operations in Syria is not a ceasefire.

"This is not a ceasefire," Cavusoglu said during a televised news conference today.

“We will pause the operation for 120 hours in order for the terrorists to leave,” Cavusoglu said. "We will only stop the operation if our conditions are met.”

Cavusoglu said a “safe zone” would need to be established at roughly 20 miles east of the Euphrates river to the Iraqi border.