Our live coverage of the Saudi oil attacks has moved here.

According to SPA, Khan said Pakistan stands with the Kingdom “in confronting these sabotage acts, which threaten the global economy and the Kingdom's security.”

He said the US is well positioned because of both the strategic petroleum reserve and US energy output.

"Well we have the strategic, if you look at what we have we have tremendous amounts of oil in our country. We're independent of everybody now. We have more than anybody else. We're the number one energy producer in the world, which took place very recently and we will soon be substantially more than anybody else. So it won't affect us and ultimately I don't think it will affect the world either — but it won't affect the United States," Trump said.

President Trump again addressed the attack on Saudi Arabian oil facilities and Iran’s alleged role in the attack as he left the White House for New Mexico on Monday.

The President said he’s on the same page as Secretary of State Mike Pompeo and is looking at all the intelligence coming in.

"I think we're the same. I think we just want to find out the final numbers and see. You look at a vector, and you look at ... there are lots of different things we can look at David and we'll know for certain over the next very short period of time," Trump said.

And once everything is analyzed, he said, “Well then we’re gonna decide what sort of response there would be.

Trump then was asked what kind of response there would be, and he clarified the question saying, "Would this be proportionate, is that what you're asking. I would say, 'yes.'"

"We'll know pretty quickly. We have pretty much all the material we need," the President said.

He also said the stock market has "been holding pretty firm considering what happened with respect to Saudi Arabia."

The Ministry of Foreign Affairs of Saudi Arabia issued a statement on Monday saying initial investigations show Iranian weapons were used in the attack and investigations are ongoing to determine the source of the attack.

The statement is similar to remarks made earlier on Monday by Saudi-led coalition spokesperson Lieutenant Colonel Turki al-Malki.

The MOFA statement, which was posted on Saudi's state news agency SPA, also thanked the international community for condemning and denouncing the Saturday attack and invited the UN and international experts to participate in the investigation.

"The Kingdom affirms that it has the capability and resolve to defend its land and people, and to forcefully respond to these aggressions," the statement added.

President Trump said Monday that “it’s looking like” Iran was behind the recent oil attack in Saudi Arabia, but wouldn’t definitively announce that the country was behind it.

“It’s looking that way. … We’re having some very strong studies done but it’s certainly looking that way in this moment and we’ll let you know soon as we find out definitively,” Trump said.

“I don’t want war with anybody,” the President said, but added that the US was prepared for any war ahead. “We’d certainly like to avoid it.”

Asked about what options he’s looking at, Trump said he wasn’t looking at any, emphasizing that the US still needs to confirm who perpetrated the attack.

On a United Nations General Assembly meeting with Iranian president Hassan Rouhani, Trump said: “I have no meeting scheduled. I know they want to meet. I know they’re not doing well as a country.”

Trump said Secretary of State Mike Pompeo and others will be heading to Saudi Arabia “at some point.” He also said they’d be making a statement soon.

“But they also know something that most people don’t know as to where it came from. Who did it … we pretty much already know," Trump said.

The UK has condemned the “attack on the Aramco oil facilities in Saudi Arabia,” British Foreign Secretary Dominic Raab tweeted on Monday.

"We will work with international partners to forge the widest and most effective response," he said. 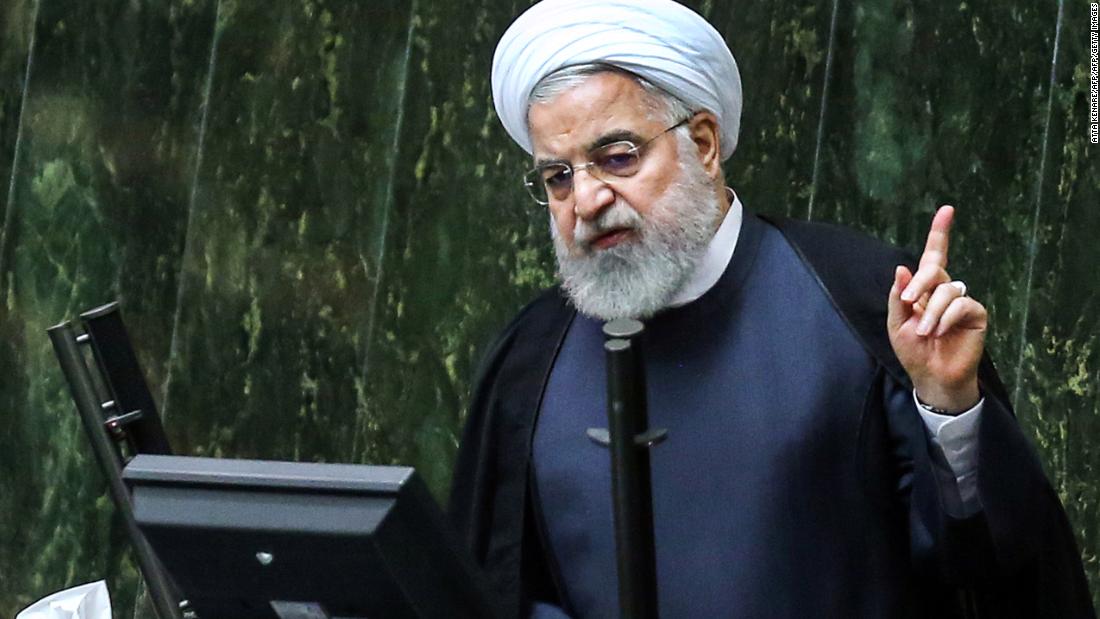 Iranian President Hassan Rouhani said that the "root cause" of the oil attack "goes back to the Yemen problem."

Rouhani spoke at a news conference with his Russian and Turkish counterparts in Ankara Monday, and was responding to a question from a reporter of whether or not the attack was discussed during the summit.

"What the Yemenis are doing is legitimate defense of themselves. It is a reciprocation and a fundamental end to this attack can only be obtained through a political process," he said.

Rouhani did not respond directly to claims from the Saudi-led coalition that the weapons used in Saturday's attack were Iranian. He instead kept the focus on the "Yemen problem."

"As far as the drones issue is concerned, it had to do with oil, but I look at it more as a question of security and stability, rather than oil," Rouhani said.

The Iranian leader said that once stability and peace returns to Yemen, then naturally, "the oil that seems to be of so much concern for everyone will also be produced and exported in security and stability."

Russian President Vladimir Putin also responded saying the issue of the attack was not discussed during the summit.

"You know what the situation of Russia is, we are determined to avoid a serious humanitarian catastrophe," Putin said. "We believe that the best way of solving this crisis is to get an agreement between all the parties that are involved in that crisis."

Over the next few days Saudi Arabia’s Crown Prince Mohammed Bin Salman and his father, King Salman, face the biggest decision of their lives at they respond to the attacks on Saudi oil facilities.

Get it wrong and the region could burn. Get it right and the desert Kingdom could prosper and reform as the ambitious Crown Prince plans.

The dilemma is to strike a balance between punishment and persuasion: To go for Iran’s jugular and unleash withering rounds of strikes on Iranian targets inside Iran or hold back, take the moral high ground, prove your case and win international backing for what ever course of action you take.

But here's trouble for MBS and his father: In this region, if you play cautious and swallow your pride today, you could deal with it for the rest of your life.

It is a test that the Crown Prince cannot choke: If he does, his dreams of reform will turn to dust.

A little about the company: Aramco, the oil company that was the target of this attack, is the cash cow he needs to milk to turn the country’s economy away from hydrocarbons and keep the next generation of young Saudis in employment. Get the response to the attack wrong and confidence in the company will tumble, taking its value with it.

Two weeks ago in an apparent bid to speed a long discussed Aramco IPO, he replaced his energy minister with his half brother and switched out the Aramco boss for another close confidant. Whatever reasons he had for shifting gear then will look even starker now.

He must act decisively and without reasonable fear of retaliation. A second wave of similar attacks — something the Houthi rebels have threaten, whomever they are speaking for — would be disastrous for confidence in Aramco and the IPO.

MBS must be strongman, diplomat and peace maker all in one. Failure can not be an option.