President Trump suggested earlier today that "rogue killers" could be behind the disappearance of Saudi journalist Jamal Khashoggi, after a phone call with Saudi Arabia's King Salman over the case.

Trump told White House reporters that Salman offered him a "flat denial" in relation to the disappearance of Khashoggi, a columnist for The Washington Post who was last seen in public when he entered the Saudi consulate in Istanbul in Turkey on October 2.

"It wasn't like there was a question in his mind. The denial was very strong," Trump said of King Salman.

"It sounded to me like maybe these could have been rogue killers, who knows," Trump said. It was not clear whether Trump was offering his own analysis or whether the suggestion came from Salman.

"We are going to try to get to the bottom of it very soon," Trump added. "But his was a flat denial."

Secretary of State Mike Pompeo left Washington for Riyadh around midday Monday to meet with Saudi Arabia's King Salman on President Trump's orders, as the investigation into the disappearance of Saudi journalist Jamal Khashoggi intensified.

Khashoggi, a columnist for The Washington Post, was last seen in public when he entered the Saudi consulate in Istanbul in Turkey on Oct. 2. 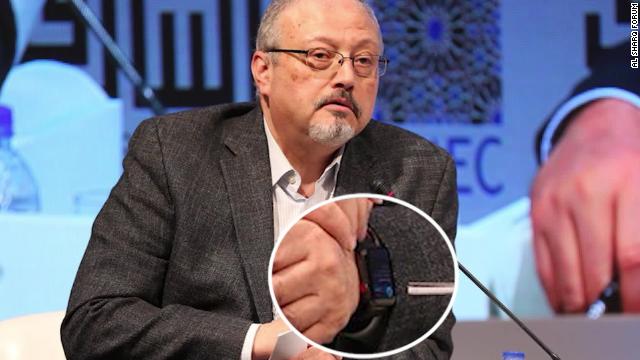 Experts have dismissed claims that a recording of the alleged killing of Saudi journalist Jamal Khashoggi may have been transmitted using his Apple Watch.

The Turkish newspaper Sabah reported Saturday morning that Khashoggi turned on the recording function of his Apple Watch before walking into the Saudi consulate in Istanbul on October 2, and that audio clips of his "interrogation, torture and killing were audio recorded and sent to both his phone and to iCloud."

CNN could not independently verify the Sabah report and was seeking comment from both Saudi and Turkish officials. Saudi Arabia firmly denies any involvement in Khashoggi's disappearance and says he left the consulate that afternoon.

On Friday, a source familiar with the ongoing investigation told CNN Turkish authorities had audio and visual evidence that showed Khashoggi was killed in the Saudi consulate. It's unclear how they obtained that evidence though.

And claims the journalist's smartwatch was able to transmit audio of his alleged murder inside the consulate to his iPhone, which his fiancée was carrying outside the building, are unlikely.

The Saudis are preparing a report that will acknowledge Jamal Khashoggi's death was the result of an interrogation that went wrong — one that was intended to lead to his abduction from Turkey, according to two sources.

One source says the report will likely conclude that the operation was carried out without clearance and transparency and that those involved will be held responsible.

One of the sources acknowledged that the report is still being prepared and cautioned that things could change.