Covid-19 infections may increase in Lebanon over the next 10 days in the aftermath of the Beirut blast, the country's Health Minister Hamad Hassan said.

Hassan told radio station Sawt Loubnan that coronavirus cases may climb because of interactions between the wounded and doctors without personal protection equipment, according to the state news agency NNA.

Due to the emergency and panic, I am worried that treating the wounded in hospitals and the loss of personal protection equipment supplies may have an impact on the number of coronavirus patients in the next 10 days," Hassan said, reported NNA.

He added that emergency field hospitals would have designated sections to treat coronavirus patients.

Lebanese hospitals have been overwhelmed after an explosion struck Beirut's port on Tuesday, killing at least 137 and wounding 5,000. Four hospitals were damaged in the blast.

Lebanon recorded 209 coronavirus cases on Tuesday and 146 cases on Wednesday, according to an official statement by the Health Ministry on Twitter.

The country has had a total of 5,417 coronavirus cases with 68 deaths, according to Johns Hopkins University.

French President Emmanuel Macron has said "unconditional help is the priority" in the wake of the devastating Beirut blast, but also warned that unless reforms were implemented "Lebanon will continue to sink."

Macron landed in the Lebanese capital on Thursday and was welcomed by President Michel Aoun.

Speaking shortly after his arrival, Macron stressed that there needed to be a fight against corruption in the country's energy sector and public contracts.

There is mounting public anger in Lebanon at the political class over revelations that the blast may be linked to government negligence.

Macron added that the Lebanese authorities have a "historic responsibility" in the current crisis.

It is a political, moral, economic and financial crisis whose first victim is the Lebanese population," he said.

France has sent an aid package to Lebanon which includes two military planes, 55 personnel, 15 tons of equipment and a mobile clinic able care for 500 wounded people.

One French national was killed in the blast and 24 others were injured, Junior Minister to France's Foreign Ministry Jean-Baptiste Lemoyne told France Inter radio on Thursday.

An employee of the German embassy in Beirut was killed in Tuesday's explosion, Germany's foreign minister has confirmed.

“Our worst fears have come true," Heiko Maas said in a statement Thursday.
"A member of the German embassy was killed in her apartment in Beirut as a result of the massive explosion. All staff of the foreign ministry are in deep mourning at the loss of our colleague."
Maas added: "I have offered my heartfelt condolences to the family and the staff of the embassy in Beirut, also on behalf of my colleagues and the Federal Government. My thanks go to all those throughout the world who, like our departed colleague, put themselves at great personal risk every day in the service of our country."

At least 137 people were killed in the blast, with many more still missing.

A Chinese medical team from the United Nations Interim Force in Lebanon (UNIFL) will provide aid to Beirut in the aftermath of Tuesday's disaster, according to Chinese state media.

The UNIFL is a peacekeeping team which supports the Lebanese armed forces in the south of the country.

The peacekeeping team will bring medical supplies to Beirut and assist in the response efforts.

"After we received the order from the UNIFIL, we selected some personnel and set up a command team, a transportation team, a medical team and a support team, and we also made preparation of the necessary supplies carefully. Now we are waiting for the order to set out," Li Ruzhen, head of medical detachment for the 18th batch of Chinese peacekeeping troops to Lebanon said, according to CCTV.

One Chinese citizen was injured during the blast, the Chinese Embassy in Lebanon said on Wednesday.

Prince Charles and his wife the Duchess Cornwall have said their "hearts go out" to the people of Lebanon, in a message of condolence sent to the country's president.

In the letter, posted on the couple's official Twitter account on Thursday, the heir to the British throne wrote:

"My wife and I wanted you to know how deeply we feel for all the people of Lebanon following the horrific explosion in Beirut, which has resulted in the tragic death of so many and caused such unimaginable devastation.

The UK will send £5 million ($6.6 million) in aid to Lebanon and will also provide medical and search and rescue experts to help in the aftermath of the Beirut blast, Britain's Foreign Secretary Dominic Raab told reporters on Wednesday.

Speaking to radio station Sawt Libnan on Thursday, and carried by NNA, Hassan said: “We are in contact with Arab and European countries to secure medical aid for Lebanon … what is required today is to set up field hospitals in the capital and this should include military hospitals.”

Germany will send a unit of 50 rescue and recovery specialists to Lebanon, the German Technical Assistance Agency, THW, announced Thursday on Twitter.

The specialists from the Rapid Reaction Force for Recovery Abroad will work to trace people trapped under structures and rescue them.

Hundreds of people are still missing after the blast, and that number is continuing to increase, Lebanon’s Health Minister Hamad Hassan said on Wednesday.

Shock at the devastation caused by the massive port explosion in Beirut was giving way to anger Thursday, as new information emerged that officials in the Lebanese capital had ignored repeated warnings about a stockpile of dangerous chemicals linked to the blast.

There is a growing body of evidence, including emails and public court documents, that officials knew about a shipment of thousands of tons of ammonium nitrate -- once described as a "floating bomb" -- that had been confiscated by Lebanese authorities and was being stored in a warehouse at the port for the past six years, but had failed to act.

The revelation that the blast could be attributed to government negligence has reignited long-held frustration at Lebanon's political class, which sunk the country deep into debt, and at endemic corruption that lined the pockets of the wealthy elite at the expense of basic public services and infrastructure.

But years of government corruption has left little hope among those on the streets that any investigation will get to the truth of why such large quantities of the dangerous chemical were allowed to be stored in the middle of the city without adequate safety measures -- and who is responsible.

"This accident here, this crisis, for 20 years they're going to talk about it. The investigation, it's never going to end. No conclusion, no results," said one resident in downtown Beirut.

Jad Chaaban, associate professor of economics at the American University of Beirut, said "this is a criminal attack by the ruling state."

"They have committed a crime by storing these nitrates for more than a decade there, with no accountability," Chaaban said, adding that there is a rising anger among the people. 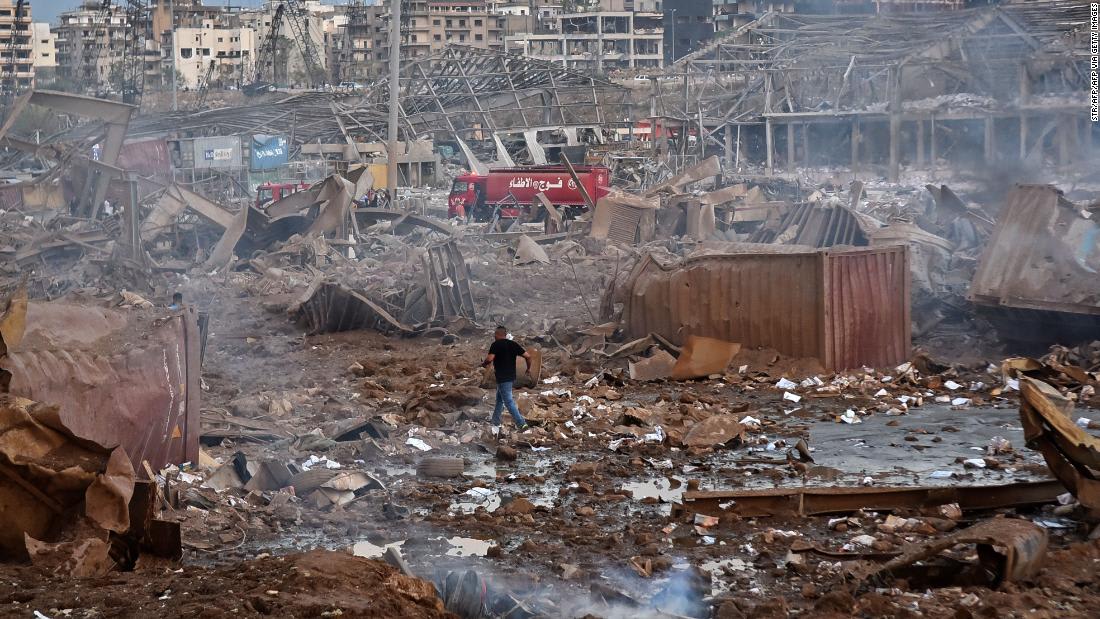 Shock turns to anger in Beirut over warnings before deadly explosion

The non-profit organization Human Rights Watch has called on Lebanese authorities to invite international experts for an independent investigation into Tuesday's blast, which rocked the capital Beirut.

“Given the Lebanese authorities’ repeated failure to investigate serious government failings and the public’s distrust of government institutions, an independent investigation with international experts is the best guarantee that victims of the explosion will get the justice they deserve,” said Aya Majzoub, Lebanon’s researcher at HRW, in a statement on Thursday.

“The investigation should determine the causes and responsibility for the explosion and recommend measures to ensure it cannot happen again. The Lebanese government should ensure that those affected by the blast have access to adequate housing, food, water, and health care, with all aid distributed fairly and impartially.”

Questions of judicial independence: Human Rights Watch expressed serious concerns about the ability of the Lebanese judiciary to conduct a credible and transparent investigation on its own.

“Lebanese and international rights groups have for years documented political interference in the judiciary and criticized its lack of independence," the statement said. “Further, initial evidence suggests that some judges were aware that the ammonium nitrate was stored in Beirut’s port and allegedly failed to take action,” the statement added

Some context: Authorities are still investigating the cause of the explosion, but Lebanon's prime minister said the probe would focus on an estimated 2,750 metric tons of the explosive ammonium nitrate stored at a warehouse at the port.

It has been there since 2014, despite the director of Lebanese Customs repeatedly warning the government of its danger over the years.