Dozens die in Gaza as US Embassy opens in Jerusalem

Senate Minority Leader Chuck Schumer just released this statement showing support of President Trump's decision to the move the US embassy in Israel to Jerusalem:

“In a long overdue move, we have moved our embassy to Jerusalem. Every nation should have the right to choose its capital. I sponsored legislation to do this two decades ago, and I applaud President Trump for doing it.”

At least 43 people have been killed during clashes Monday along the border fence between Israel and Gaza, according to the Palestinian Ministry of Health.

This is the biggest number of fatalities suffered in one day since the latest round of demonstrations began more than six weeks ago. The previous highest number was 17 on March 30, the first day of protests.

By a CNN count, based on Ministry of Health figures, more than 90 people have been killed in the demonstrations since March 30.

Secretary of State Mike Pompeo just released a statement following Jared Kushner's remarks at the US embassy opening in Jerusalem.

In the statement, Pompeo praised President Trump for keeping his promises and noted that the United States is still committed to the peace process between Israel and Palestinians.

As the US opened its embassy today, at least 41 people have been killed in protests in Gaza. 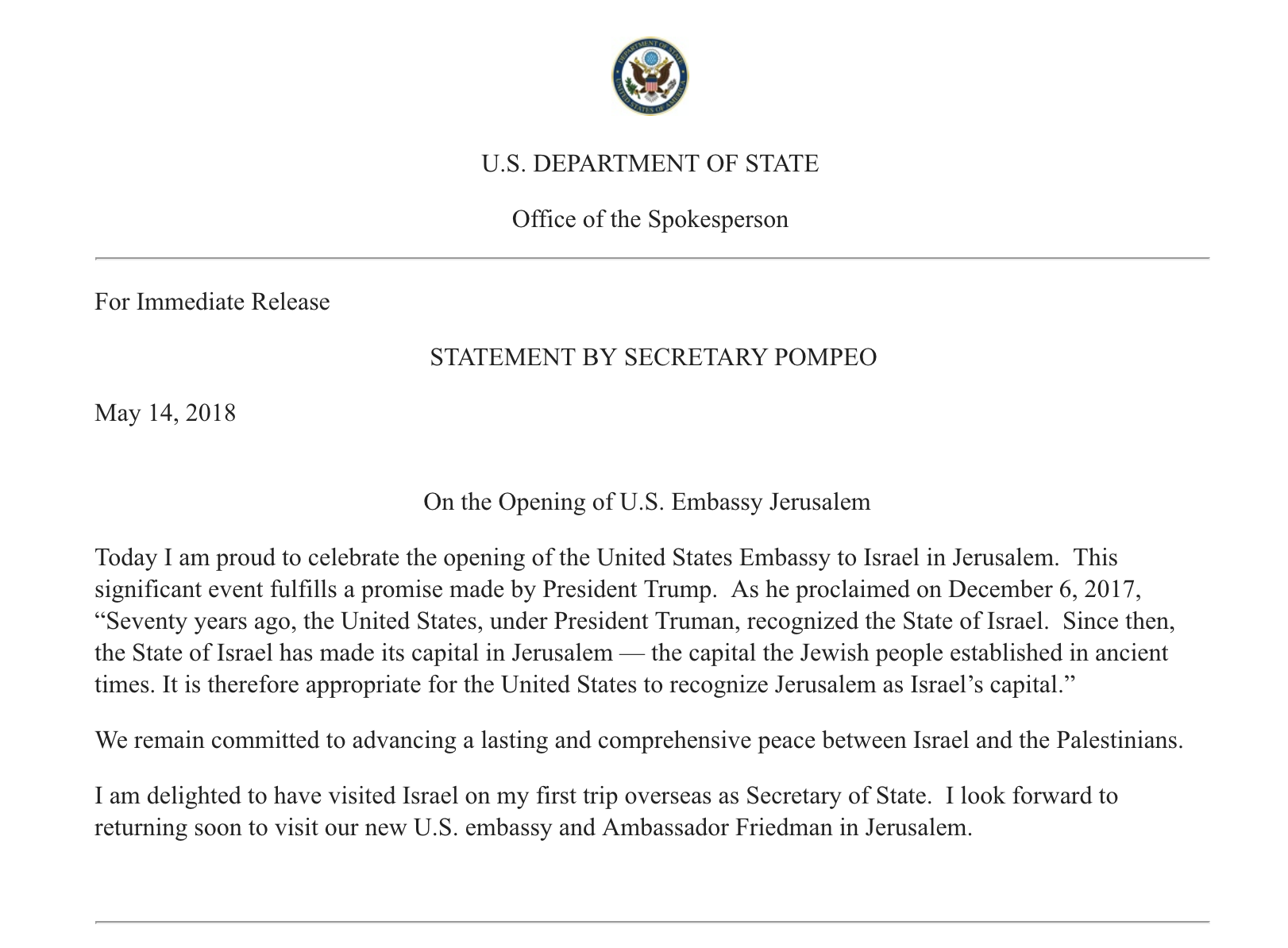 Speaking at the US embassy opening in Jerusalem, Israeli Prime Minister Benjamin Netanyahu thanked President Trump for keeping his promise — something Jared Kushner also brought up during his remarks.

"Thank you, President Trump, for having the courage to keep your promise."

He added in a tweet: "Thank you, President Trump for making the alliance between Israel and the United States stronger than ever."

Jeffress has called mormonism a cult; has called Islam an "evil religion" and suggested the Catholic church was lead astray by Satan.

Hagee came under the national political spotlight in 2008 for comments that prompted then-Republican presidential candidate John McCain to reject his endorsement. One of Hagee's sermons in the 1990s was leaked that seemed to suggest that Adolf Hitler had been fulfilling God's will by aiding the desire of Jews to return to Israel in accordance with biblical prophecy.

As the US opens its embassy in Jerusalem, protests in Gaza have turned deadly. At least 41 people have been killed in clashes right on the border, according to health officials.

Here are videos taken at the scene:

The video below appears to show tear gas being fired at protesters near the Israeli border:

Jared Kushner said the US embassy's move to Jerusalem will strengthen the US and Israel.

"I am confident that as a result our nations will be stronger, our peoples more prosperous, and our futures filled with even greater promise for peace."

In his remarks at the US embassy opening, Jared Kushner just mentioned President Trump's decision to withdraw the US from the Iran nuclear deal.

"Last week President Trump acknowledged another truth and kept another promise. He announced his intention to exit the dangerous, flawed and one-sided Iran deal."

President Trump announced last week that he is quitting the Iran nuclear deal, pitting him against the United States' closest allies and leaving the future of Tehran's nuclear ambitions in question.

Many in the crowd stood and applauded at Kushner's remarks. Watch:

Jared Kushner, senior adviser to the President and Trump's son-in-law, said this embassy move proves that the United States can keep its promises.

"Because when president Trump makes a promise, he keeps it," Kushner said. "We have shown the world once again that the United States can be trusted."