Our live coverage of the Israel repeat general election has concluded, but you can read more about it here.

Speaking in Tel Aviv, Benjamin Netanyahu told his supporters Israel needed a "Zionist government" as they wait for the election results to roll in.

“Israel needs a strong, stable, Zionist government committed to Israel as a national state for the Jewish people," Netanyahu said.

On Trump: Netanyahu also mentioned US President Donald Trump, who is incredibly popular in Israel -- far more popular than he is in the US. Just last month when Trump said Jews who voted Democrat were showing "great disloyalty to Israel," most mainstream politicians in Israel remained silent.

“President Trump’s plan of the century will be presented soon," Netanyahu said. "The negotiations with the Americans will shape the future of Israel for generations to come.”

Speaking to party supporters in Tel Aviv, Benny Gantz struck an optimistic tone despite inconclusive exit polls. He said that the people of Israel had voted for unity, and that he intended to lead his Blue and White party in creating a “broad unity government.”

Contacts with other parties to build that coalition have already started, he added, saying “I intend to talk to everybody, starting tonight.”

Gantz also said that it appeared as though rival Benjamin Netanyahu had not succeeded in his mission to put together a coalition of right-wing and religious parties. Netanyahu has not yet spoken publicly.

“Of course we’ll be waiting for the true and final results, but the way it looks right now, we accomplished our mission and we did it our way,” he said.

Benjamin Netanyahu and Benny Gantz are both expected to speak shortly.

But, unlike at April's election, neither look poised to declare any sort of victory.

As expected, exit polls don't suggest a clear winner, or an obvious path for either man toward building a majority government.

Final certified results will take a few days, as ballot boxes are checked and votes come in from Israelis overseas. And, if results are as tight as expected, then it may still be unclear just who will end up forming a successful coalition government.

Officially, it's up to Israeli President Reuven Rivlin to decide who is tasked with forming the next government -- and he said Tuesday he was eager to avoid a third re-do vote.

From Sunday, Rivlin will consult with the heads of political parties that have secured enough votes to enter the Knesset. This will take a few days, and the President will likely announce his decision about a week after the election. From that point, the party leader appointed to the task has six weeks to form a government.

But, as we saw last time around, even after all those weeks of negotiations and jostling, it's still possible to come up short of a majority.

Some Benjamin Netanyahu supporters gathered at the Likud Party headquarters in Tel Aviv Tuesday night. They reacted to the initial exit polls by waving banners emblazoned not with "Netanyahu," but instead with "Trump."

Throughout his campaign, the Prime Minister boasted about his tight relationship with US President Donald Trump, who is popular in Israel.

And billboards across the country are plastered with photographs of the two of them together.

Here are members of the crowd holding Trump signs:

Channel 13 has updated its exit poll to look like this:

These projections, broadcast three hours after the initial exit poll, have revised downwards the size of Benjamin Netanyahu’s preferred religious-right bloc (Likud, Yamina, Shas, UTJ) from an initial total of 54 seats to 53.

They also suggest a possible increase in the size of a possible Benny Gantz center-left Arab bloc (Blue & White, Democratic Union, Labor-Gesher and the Joint Arab List), from 58 to 59 seats.

But this election is still too close to call -- and previous experience tells us that there can be considerable discrepancy between exit polls and the actual results.

Speaking in Jerusalem, Yisrael Beiteinu leader Avigdor Liberman has said the results projected by the Israeli election exit polls have confirmed his campaign message that what the country needs is a “large liberal government” made up of Likud, Blue and White and his own party.

He says no other type of coalition would succeed in tempting him, regardless of what ministerial posts it might offer him.

“Even a unity government that does not include us,” he said, would be “better than the narrow alternatives.”

While none of the exit polls carried out during Israel's general election Tuesday showed Prime Minister Benjamin Netanyahu's Likud Party in the lead, that does not necessarily mean he won't be able to form the next government.

Either Likud or Benny Gantz's Blue and White Party will have to secure the support of other smaller parties to form a governing majority (of 61) in the 120-seat Parliament.

A possible bloc for Netanyahu includes the right-wing Yamina party and the two religious parties, Shas and UTJ. But none of the exit polls project that this grouping would gain a majority — projections are between 54 and 57 seats.

Gantz’s Blue and White Party could secure the support of the Democratic Union and Labor-Gesher parties, plus, perhaps, the Joint List of Arab parties. But exit polls suggest that this bloc would score between 54 and 58 seats — still not enough for a majority. 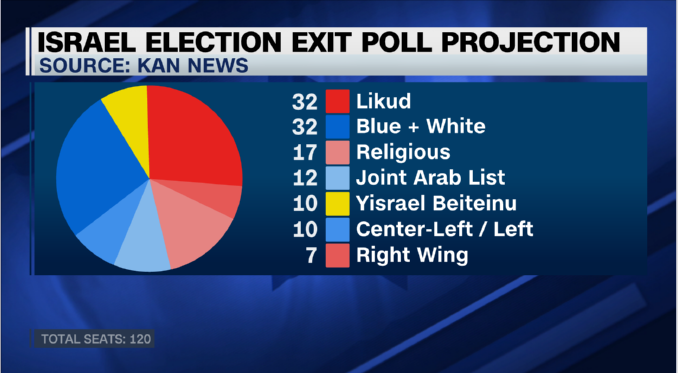 But these are just projections. Final results could look different and it may yet be that either Netanyahu or Gantz could end up with a chance to form a government, with the support of the smaller parties essential in any coalition.

The only arithmetic that provides a clear path to a working majority would see a national unity government of Likud and Blue and White together, possibly with the support of Yisrael Beiteinu as well. After April’s election, Yisrael Beiteinu leader Avigdor Liberman refused to join Likud’s right-wing coalition. He has spent much of this campaign calling for a unity government, with no role for Israel’s religious parties. If Likud, Blue and White and Yisrael Beiteinu did join forces it could, on the basis of these projections, have a total of between 72 and 75 seats.