Iran says it will not hand the flight data recorders from the Ukraine International Airlines airliner back to plane-maker Boeing or the United States.

Speaking to Iran’s semi-official Mehr news agency, the head of Iran’s Civil Aviation Authority, Ali Abedzadeh said the black boxes would be analyzed in the country where the accident took place, in accordance with ICAO (International Civil Aviation Organization) rules.

Ukrainian investigators would be a part of the process, he added.

But Abedzadeh did rule out involving the US in any stage of the investigation. "We will not give the black box to the manufacturer [Boeing] or America,” he said.

Without speaking at length about the accident, the head of Iran’s Civil Aviation Authority revealed that the pilot did not communicate any problems to the air traffic control, but said it was still too early to tell what had caused the crash.

"The cause of the accident will not be discovered or announced until the black box is analyzed," he added.

Plane maker Boeing said it is in contact with Ukraine International Airlines and stands by "them in this difficult time" in a Twitter post Wednesday, after its aircraft crashed minutes after takeoff from Tehran.

The aviation giant sent its "heartfelt thoughts" to the victims and their friends and families, and said it was "ready to assist in any way needed."

Shares in the manufacturer were down 2% in premarket trading in New York.

Under international rules, the investigation into an air crash is held by the state of occurrence (i.e. where it happened.)

Iran is the state of occurrence in this case, as the plane crashed minutes after takeoff from Tehran.

Ukraine, as the state of registry and state of operator, will participate.

The United States, as state of design and manufacture of the aircraft, will also take part on behalf of Boeing.

Iran must produce a preliminary report stating the basic facts within 30 days, although this timeframe is often extended.

Ukraine has said it is too early to comment on the cause of the crash of flight PS752 on Wednesday, its Prime Minister said during a press conference in Kiev.

"Any versions before the official conclusion is just manipulation,” Oleksiy Honcharuk said in response to a question about speculation that a rocket strike caused the crash.

He said Ukraine had asked to join an Iranian-led investigation into the crash.

The flight-tracking service said in a tweet that the jet had been in service for about three and a half years. Data from FlightRadar 24 suggests that the crash could have happened as quickly as two minutes after takeoff. This map shows the path of the short flight. 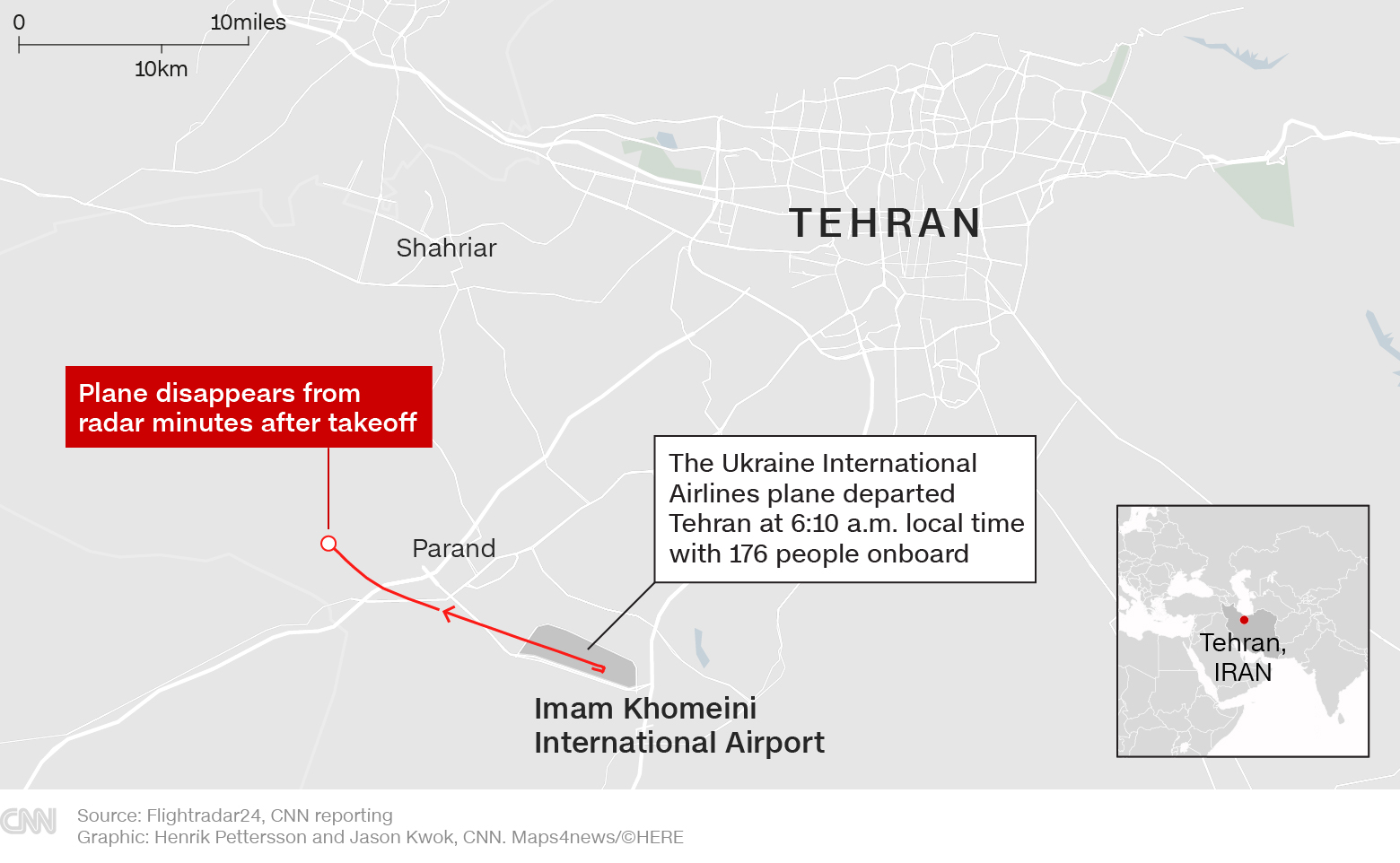 In a statement, a Foreign Office spokesperson said:

We are deeply saddened by the loss of life in the plane crash in Iran overnight. We are urgently seeking confirmation about how many British nationals were on board and will do all we can to support any families affected."

European Union leaders have reacted to news of the Ukraine International Airlines crash soon after take off from Tehran.

President of the European Commission, Ursula von der Leyen, sent her "deepest condolences to all who lost their beloved ones," in a Wednesday statement.

"At this moment it is for the aviation security experts to investigate the cause of the crash providing answers to this horrible tragedy,” she added.

Boyko Borissov, Bulgarian Prime Minister, said he empathized "with the pain and suffering of the loved ones of the casualties," in a Twitter post.

The Latvian and Estonian Prime Ministers also expressed their condolences:

Lithuanian President Gitanas Nausėda said his country's "hearts are with" the bereaved families.

Ukraine's embassy in Iran has clarified its previous press release, which ruled out a terror or rocket attack as a cause behind Wednesday's plane crash.

A new embassy statement now says that information on the causes for the incident is "being clarified." It added that any prior statements on the causes of the crash "are not official."

An earlier statement on the embassy's website, which has since been taken down, initially ruled out a terror attack as a possible cause for the crash, adding that preliminary information suggested an engine malfunction.

Ukraine's President Volodymyr Zelensky said in a Facebook post earlier that the country has set up a commission to “work through all possible versions."

The two black boxes from the Ukraine International Airlines flight that crashed in Iran on Wednesday have been found, Iranian state broadcaster IRIB reported, citing the Tehran prosecutor.