What happened: Iran seized a British-flagged tanker, the Stena Impero, while it was sailing in the Strait of Hormuz on Friday. UK and US officials quickly denounced the move as a reckless violation of international norms.

Iranian media reported Saturday the Stena Impero had been involved in an accident with a fishing boat, and that the ship had been taken to Bandar Abbas Port. The 23-man crew -- made up of Indian, Russian, Latvian and Philippines nationals -- will remain on board until Iranian authorities finis investigating the incident, Iran's Fars news agency reported.

The UK Foreign Office also advised ships to "stay out of the area" for the time being.

Why it matters: The seizure comes amid a dangerous standoff between Iran and the US.

The Strait of Hormuz is one of the most important points of traffic for the world's oil supply chain. If this standoff were to continue to affect traffic in the strait, it could seriously hamper the global economy.

Richard Meade, the managing editor of the influential shipping industry publication Lloyds List, said the Stena Impero's seizure is "probably the highest level security threat that we have seen in the region since the late 80s."

The Stena Impero got into an accident with an Iranian fishing boat before it was seized, Iranian officials said, according to the country's semi-official Fars News agency.

The general director of Hormuzgan Province’s Ports and Maritime Organization told Fars that the fishing boat attempted to signal to the tanker but was ignored.

After it was seized by Iranian forces, the Stena Impero was then taken to Iran’s Bandar Abbas Port, Fars reported. All 23 crew members are going to be held on board until the investigation ends, according to Fars. 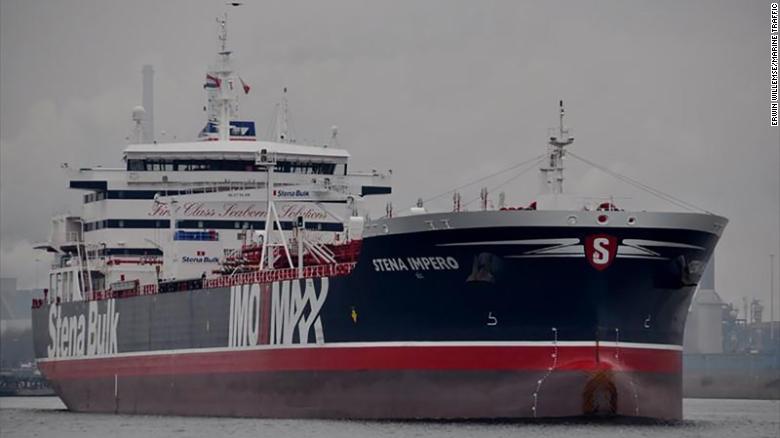 Britain warned Friday there would be "serious consequences" if Iran did not release a UK-flagged oil tanker it seized in the Strait of Hormuz Friday, the latest confrontation in the increasingly tense standoff in the important shipping route.

Iran's Islamic Revolutionary Guard Corps (IRGC) said it captured the vessel, the Stena Impero, after it violated "international regulations," according to the country's state-run Press TV.

"These seizures are unacceptable. It is essential that freedom of navigation is maintained and that all ships can move safely and freely in the region," British Foreign Secretary Jeremy Hunt said Friday.

The seizure of the British-flagged Stena Impero tanker is yet another in an accelerating series of recent maritime episodes involving Iran.

Here's a look at the most significant: 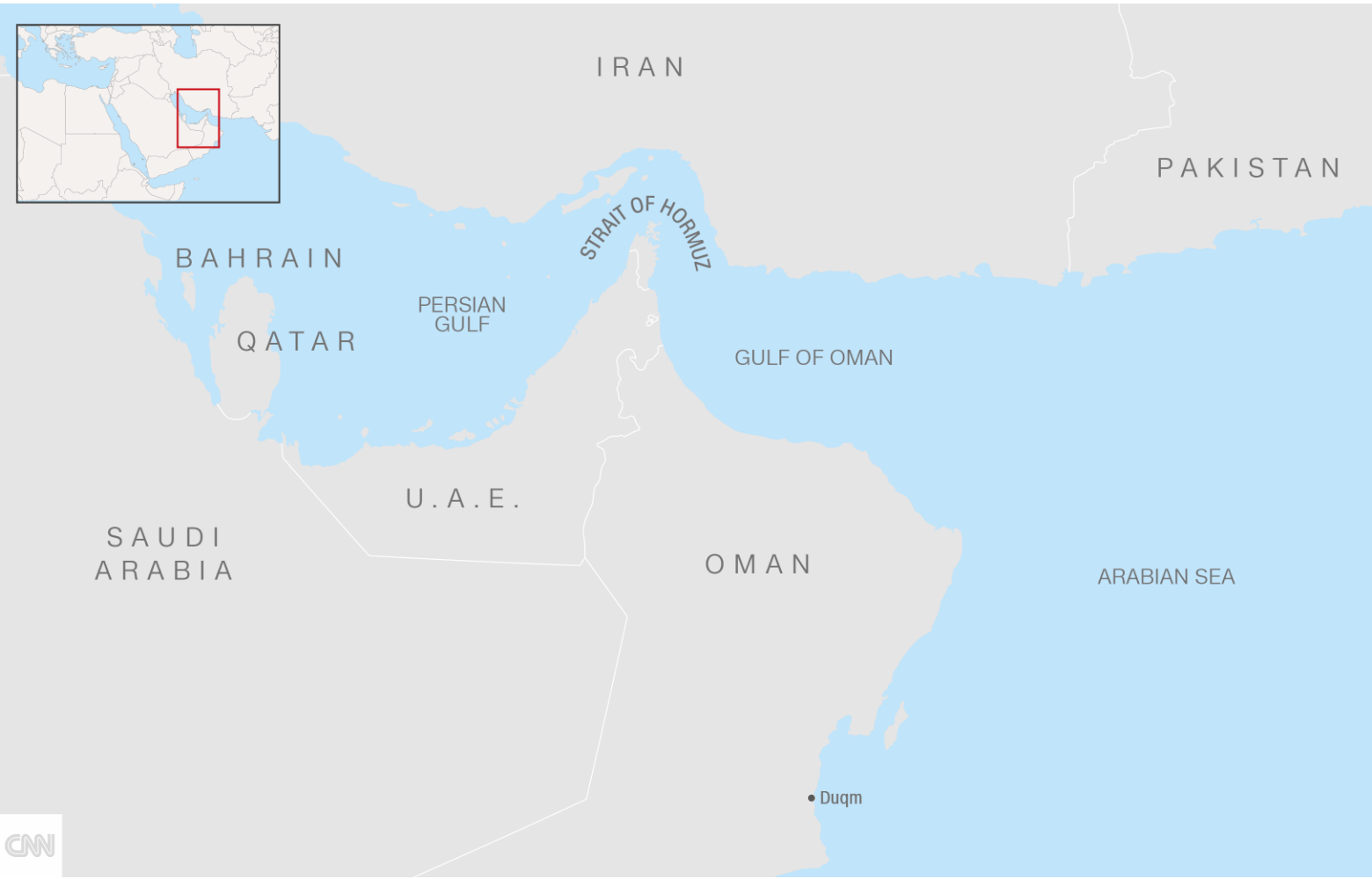 There is no place in the world more important for the global supply of oil than the Strait of Hormuz.

The channel, which is only 21 miles (33.7 kilometers) wide at its narrowest point, is the only way to move oil from the Persian Gulf to the world's oceans. And that's why the seizure of a British-flagged ship in the strait Friday is such a concern.

If the Strait were to be closed, it would be a massive blow to the world's economy.

The Strait of Hormuz, which links the Gulf of Oman and the Persian Gulf, "is the world's most important choke point," said the US Energy Information Administration.

The Strait is even narrower than its 21-mile width suggests. The shipping channels that can handle massive supertankers are only two miles wide heading in and out of the Gulf, forcing ships to pass through Iranian and Omani territorial waters.

And the amount of oil that passes through the channel is staggering, with roughly 80% of the crude it handles destined for markets in Asia. The world's global economy could not function without that supply of oil lubricating it.

About 22.5 million barrels of oil a day passed through the Strait of Hormuz on average since the start of 2018, according to Vortexa, an energy analytics firm. That's roughly 24% of daily global oil production, and nearly 30% of oil moving over the world's oceans.

British Foreign Secretary Jeremy Hunt has warned there will be “serious consequences” if Iran does not quickly release a UK-flagged oil tanker, but played down the prospect of military action, suggesting the UK was looking at a "diplomatic way" to resolve the situation.

The foreign secretary addressed the media after attending a meeting of the UK government's emergency committee Cobra on Friday night.

Here are his full comments:

I have spoken to Secretary of State Pompeo in the US earlier this evening about the situation. I’ve tried to speak to Foreign Minister Zarif of Iran, but I understand that he is on a plane, so I will speak to him as soon as I can.
This is completely unacceptable. Freedom of navigation must be maintained. We are having an emergency meeting of the government’s Cobra committee in a few minutes time.
We will respond in a way that is considered by robust. And we are absolutely clear that if this situation is not resolved quickly, there will be serious consequences.
We’re not looking at military options, we’re looking at a diplomatic way to resolve this situation. But we are very clear that it must be resolved.
Freedom of navigation in the Gulf is absolutely essential. If that freedom of navigation is restricted, Iran is the biggest loser and so it is in their interest to resolve this situation as quickly as possible and we will do everything we can to do that, but as I say, there will be serious consequences if we’re not able to resolve it quickly.

What happened: Iranian forces seized a British-flagged tanker, the Stena Impero, while it was sailing in the Strait of Hormuz on Friday. UK and US officials quickly denounced the move as a reckless violation of international norms.

Why it matters: The seizure comes amid a dangerous standoff between Iran and the United States. The Strait of Hormuz could become a tinderbox -- where one small mistake can lead to catastrophe.

Freedom of navigation is also a major concern in the Strait of Hormuz, because it's the only way to ship oil out of the Persian Gulf. Around 24% of global oil production passes through the narrow passage.

The backstory: The standoff reaches back to last year, when the Trump administration decided to withdraw from the Obama-era nuclear deal that Iran struck with world powers, and re-imposed punishing sanctions on the Iranian economy. Trump and his allies said the deal did not do enough to stymie Iran's destabilizing behavior in the Middle East.

Iranian President Hassan Rouhani has since announced his country would reduce some its own commitments to the nuclear deal, unless the remaining signatories could help ease restrictions on Iran's banking and oil sectors. Despite the efforts of Germany, France and Britain, however, relations have not smoothed over -- and the UK and Gibraltar's seizure of an Iranian tanker earlier this month has only inflamed tensions.

Iranian Foreign Minister Mohammad Javad Zarif said the United States is "creating instability and insecurity" in the Middle East and Latin America after landing in Venezuela and speaking to media from the country.

Zarif did not refer to the British-flagged oil tanker seized by Iranian forces Friday.

Zarif is visiting Caracas for a meeting of the Non-Aligned Movement, a multi-national organization comprised of countries not formally aligned with or against any major power bloc.

Here are his full comments:

The United Kingdom's Foreign Office says vessels working in the country's shipping industry should avoid the Strait of Hormuz.

The warning comes after the British-flagged Stena Impero was seized in the region by Iranian forces.

We remain deeply concerned about Iran's unacceptable actions which represent a clear challenge to international freedom of navigation. We have advised UK shipping to stay out of the area for an interim period.
As the Foreign Secretary has said, our response will be considered and robust and there will be serious consequences if the situation is not resolved.
We remain in close contact with our international partners and there will be further meetings over the weekend.