Our live coverage has ended. Read the full story here.

When the Egyptian presidency and the military eulogized Mubarak on Tuesday, they largely focused on his career in the military, particularly his time as the commander of the air force during the 1973 war with Israel.

It is not yet clear if he will be given a military funeral, but already, the official response is in stark contrast to the reaction to the death of his successor, former President Mohamed Morsy.

Morsy, who became Egypt’s first democratically elected leader in 2012, dropped dead in court last June. He was ousted by the military after one year as president and spent his last six years in prison with restricted access to medical care, family and lawyers.

He was buried without a funeral late at night with only close family members in attendance.

In contrast, Mubarak spent most of his jail time in a military hospital and walked free to spend his last days with family.

The government of current President Abdel Fattah El-Sisi sees the legacies of both men as a threat. Morsi was a leader of the Muslim Brotherhood, the Islamist movement that opposed Mubarak and was, in recent years, brutally crushed by Sisi.

Mubarak-era ministers and officials who tried to challenge Sisi’s rule have been sidelined or imprisoned, including the late president’s former military chief of staff. Mubarak’s sons, one of whom was groomed to succeed his father, were seen as potential threats, especially after their acquittals from most corruption charges.

Yet the current government, which has conducted a brutal crackdown on dissent that critics say is far worse than Mubarak’s, has declared three days of mourning.

Mubarak, after all, is one of their own. In his last days as president, he gave Egyptians the choice between himself or chaos. This is exactly how Sisi describes the uprising and the ensuing upheaval. Dissent became synonymous with chaos.

So even though Sisi was part of the military council that sided with protesters to remove Mubarak from office in 2011, this regime will continue to honor him because he is the antithesis of the uprising.

Egypt’s presidency declared three days of national mourning, beginning on Wednesday, after the death of Mubarak.

“[Egypt is] declaring a state of general mourning throughout the nation for a period of three days for the death of former President Mohamed Hosni Mubarak.”

“His Excellency praised the stances of the late President in supporting the Palestinian cause and the Palestinian people, in achieving their rights to freedom and independence,” Wafa reports, adding that Abbas “mourned [Mubarak’s passing] with great sadness and sorrow.”

Mubarak played a key role in several rounds of peace talks between Israel and the Palestinian Authority.

In a statement to mark the passing of Egypt’s former President Hosni Mubarak, Israel’s Prime Minister Benjamin Netanyahu described him as “a leader who led his people to peace and security, to peace with Israel.”

Describing Mubarak as a personal friend, Netanyahu said, “I met with him many times. I was impressed by his commitment; we will continue to follow this common path. I would like to send condolences to President Sisi, to the Mubarak family and to the Egyptian people.”

The Egyptian Armed Forces extended condolences to the family of Mubarak after his death was confirmed on Tuesday.

“The Armed Forces mourns one of its sons and one of the leaders of the glorious October war, former President of Egypt, Mohamed Hosni Mubarak, who passed away this morning and extends condolences to his family, to military officers and the armed forces,” a statement said.

Mubarak graduated from military college in 1952 and rose up the ranks until he became commander of the air force during the 1973 war between Egypt and Israel.

Activists who helped overthrow Hosni Mubarak in 2011 are reacting to his death on social media.

“The corrupt butcher has died without being held truly accountable for his crimes,” Egyptian activist Hossam al-Hamlawy wrote on Facebook.

“To the dustbin of history, and hopefully Sisi will receive an end fitting of his massacres,” he added, referring to current Egyptian President Abdel Fattah el-Sisi, who is widely accused of being more repressive than Mubarak, and violently quashing protests against his rule.

In August 2013, at least 817 protesters were killed by security forces in an Egyptian sit-in, according to Human Rights Watch, which dubbed the attack one of the largest “killings of demonstrators in a single day.”

Mubarak was toppled in pro-democracy protests in February 2011. He was the second Arab dictator to fall in a region-wide wave of popular demonstrations known as the Arab Spring.

The late autocrat was jailed for six years on corruption charges following his overthrow. He spent most of his imprisonment in a military hospital. In 2012, he was sentenced to life in prison for complicity in the killing of protesters during the January 2011 protests. He was later acquitted of those charges.

Amnesty International said at least 840 people were killed and more than 6,000 injured during 18 days of street protests in Egypt.

“His fall in 2011 gave many hope as he was reviled,” tweeted Timothy Kaldas, who took part in the protests, and is currently a Non-Resident Fellow at Washington DC-based The Tahrir Institute.

“He lived to see a more brutal dictator take his place who has done so badly that many now miss Mubarak,” said Kaldas. “He died peacefully. The protestors his regime killed weren’t so lucky.”

Supporters of Mubarak remember his presidency as a period of stability and moderation, a stark contrast from the political turbulence and economic hardships that followed the Arab Spring.

But his critics say his repression robbed Egypt of a political life, paving the way for the turmoil of the last decade.

“Historians will dissect his legacy,” tweeted Egyptian-British academic H.A. Hellyer. “Frankly, 9 years after the #Jan25 uprising succeeded in pushing him out of power, but failed to revolutionise Egyptian politics, the first thing that comes to mind is this: much of the turmoil of the past decade is down to Mubarak’s rule.”

The Egyptian presidency is in mourning over the death of Hosni Mubarak, a presidential statement said on Tuesday.

“The Presidency mourns, with great sorrow, former President of the Republic, Mr. Mohamed Hosni Mubarak, for what he presented to his homeland as a leader and hero of the glorious October war,” the statement said.

Mubarak was hailed for his role as the commander of the airforce in the 1973 October war between Egypt and Israel.

“The Presidency of the Republic extends its sincere condolences and condolences to the family of the [Mubarak] who passed away this morning,” the presidency said.

Egyptian President Abdel Fattah el-Sisi assumed power in 2014, three years after Mubarak was removed after mass protests against him.

President Anwar Sadat made Mubarak his vice president in 1975. After Sadat was killed in 1981, Mubarak declared a state of emergency and ruled the country for the next three decades.

Check out the link below to see a photo gallery of Mubarak's career. 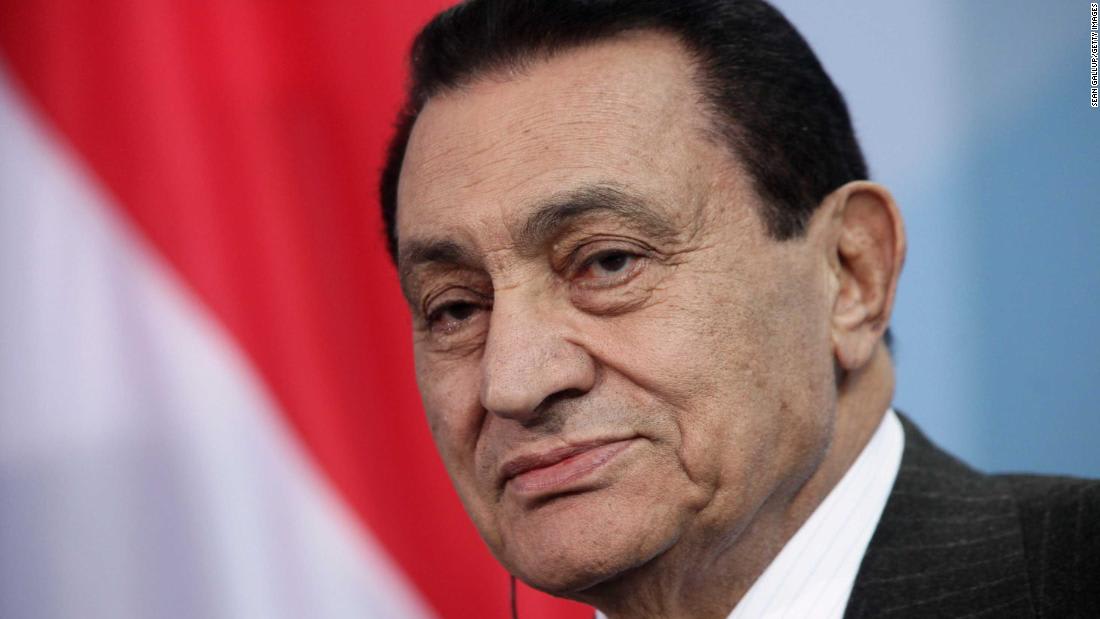 In photos: Hosni Mubarak through the years