The crew of USS Bainbridge reported that they saw an unexploded limpet mine on the side of one of the ships attacked today in the Gulf of Oman, according to a US defense official familiar with the matter.

What that means: A limpet mine is type of a mine that is attached to side of a hull using magnets.

Limpet mines were also suspected d to be used in the May attack on four oil tankers off the coast of the United Arab Emirates. The UAE concluded that a "state actor" is the most likely culprit and chemical analysis of the debris recovered in May revealed "it was highly likely that limpet mines' were deployed."

What happens now: Additional US navy ships are expected to head to the area in the coming hours for security, patrolling, helping mariners get back to port and potentially assist in arranging for tankers to be towed to port, the source said.

CNN has obtained a satellite image that appears to show smoke rising from the Front Altair tanker after it was damaged in the Gulf of Oman attack.

The strong glint on the water is caused by light reflecting.

The Front Altair oil tanker was one of two ships that were apparently attacked in the Gulf of Oman Thursday.

The Norwegian Maritime Agency said that three explosions were reported on board the Marshall Islands-flagged Front Altair oil tanker, which is owned by the Bermuda-based Norwegian company Frontline. The company said that a fire broke out after an explosion and that the cause of the blast was unclear.

Here's a look at the damage on Frontline's oil tanker: 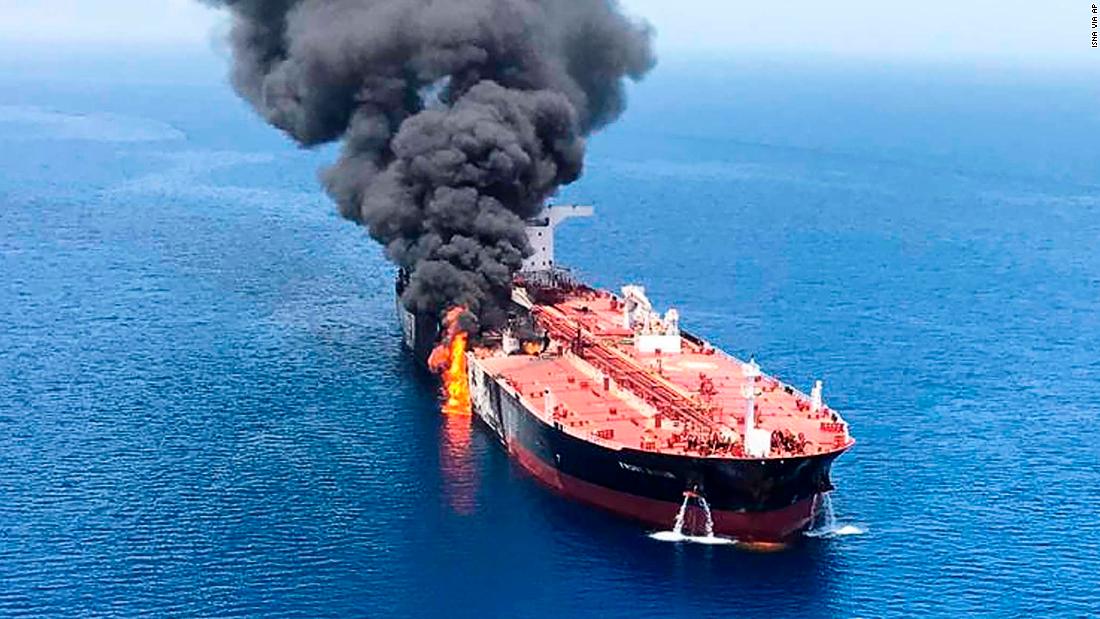 Two tankers were apparently attacked in the Gulf of Oman Thursday, less than a month after four other ships were struck in the region.

Here's what we know about the apparent attack:

The United Nations Security Council is expected to discuss the attack on two tankers in the Gulf of Oman, three diplomatic sources tell CNN. That meeting will be held at 4 p.m. ET.

“If there is something the world cannot afford, it is a major confrontation in the Gulf region,” United Nations Secretary-General Antonio Guterres told the Security Council in a meeting earlier in the day.

Jonathan Cohen, the US Deputy Ambassador to the UN, said the attacks are "unacceptable."

"It's unacceptable for any party to attack commercial shipping and today's attacks on ships in the Gulf of Oman raise very serious concerns. The US government is providing assistance and will continue to assess the situation," he said.

As the plumes rise from a brazen attack in the Gulf of Oman, oil brokers and diplomats are panicking about another lurch toward confrontation In the Middle East.

What happened is fairly clear -- two tankers were struck as they sailed through this busy and strategic shipping lane -- but why it happened and who did it is a lot less easy to explain, not least because it doesn't appear to benefit any of the protagonists in the region.

Inevitably, similarities have been drawn between Thursday's attacks and events a month ago, when four ships were targeted near the Emirati port of Furajah. For that, officials in Washington and beyond pointed the finger at Iran.

Thursday's incident is significantly more blatant, but the same officials will doubtless blame Tehran again. If and when that happens, we should remember US National Security Advisor John Bolton promised to present evidence to the UN Security Council backing up those previous claims, but has yet to do so.

Who stands to gain?

Iran doesn't appear to have a lot to gain. Say what you like about Tehran's malicious intent, these incidents heighten the global drumbeat for greater isolation and boosts those who seek to apply military pressure on Iran. Its economy is in a bad condition. Before President Donald Trump pulled the US out of the JCPOA (colloquially known as the Iran nuclear deal), Tehran was at its peak of regional influence. With diminished economic resources, its potency is likely to wane.

The incidents also came in the middle of a visit to Tehran by Japan's Prime Minister Shinzo Abe, apparently trying to mediate over the nuclear deal (although Tokyo says he's not an envoy for Washington). The apparent attacks eclipsed the Abe visit, an unexpected bit of outreach to Iran by someone Trump calls a friend.

You could make a case for Iranian hardliners staging such an attack to derail peace efforts. But Iran's hardliners -- particularly the Revolutionary Guard -- are normally a little smarter than to bomb international shipping lanes during a crucial diplomatic meeting. Iran's chief moderate, Foreign Minister Javid Zarif, was right to point out that "suspicious doesn't begin to describe what likely transpired this morning." When one party is so easily blamed, it is likely blameless, or unfathomably stupid.

What else? Reuters has reported that Tehran has been scaling up its remaining petrochemical exports ahead of tightening sanctions. Could it be looking to boost the price of oil? Maybe. But at the same time, the shipping of that same oil is going to be disrupted, so they would likely lose out all the same. It is hard to imagine an Iranian hardliner smart enough to pull this sort of apparent attack off, without also realizing they would get immediately collared.

The state-run Islamic Republic of Iran Broadcasting (IRIB) released photos and footage purporting to be of one of the tankers. CNN could not independently verify this footage.

United Nations Secretary-General Antonio Guterres has condemned the attacks on two tankers in the Gulf of Oman, warning that the world cannot afford "a major confrontation in the Gulf region."

“I note with deep concern this morning’s security incident in the Strait of Hormuz. I strongly condemn any attack against civilian vessels. Facts must be established, and responsibilities clarified. If there is something the world cannot afford, it is a major confrontation in the Gulf region," Guterres told a meeting of the UN Security Council on cooperation between the UN and the League of Arab States Thursday morning.

There have been conflicting reports regarding the whereabouts of the 44 crew members evacuated from two tankers targeted in suspected attacks this morning. Here's what we know:

All 23 crew members aboard the Front Altair tanker were rescued by the Hyundai Dubai, a South Korean cargo ship operating in the area, after explosions sparked a fire on board. According to the Hyundai Dubai, it picked up all sailors by 7:54 a.m. local time, about 74 minutes after receiving the distress call. The crew, comprising 11 Russians, one Georgian and 11 Filipinos, were transferred to an Iranian naval vessel and disembarked at a local Iranian port. They are now believed to be en route to Bandar Abbas port city, according to Frontline, the tanker's owner.

All 21 crew members aboard the Kokuka Courageous abandoned the vessel after it was "attacked" twice with "some sort of shell," per the ship's Japanese owner Kokuka Sangyo. The mariners were rescued by a tug boat before being picked up by guided missile destroyer USS Bainbridge, a US defense official told CNN. One of the crew sustained a light injury.

State-run news agency IRNA has reported that the 44 sailors and crew members on board the two tankers were rescued by the Iranian Navy.