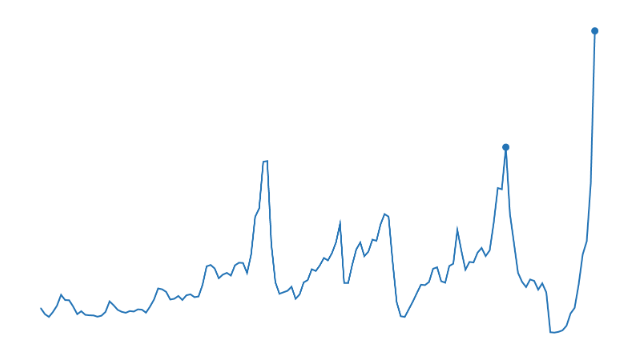 Washington, DC (CNN) – Just weeks after President Joe Biden took office, the number of unaccompanied minors arriving at the US-Mexico border began to jump, overwhelming the federal government’s resources and resulting in a scramble to find enough shelter space to accommodate them.

The volume of arrivals, combined with an unprepared administration, left thousands of children languishing in jail-like Border Patrol facilities, often for longer than the 72-hour limit set by federal law.

After Border Patrol agents take unaccompanied minors into their custody, the children are supposed to be turned over to the Department of Health and Human Services (HHS), which is responsible for the care of migrant children. But amid the coronavirus pandemic, the department had initially been operating under reduced capacity, resulting in fewer beds available for minors arriving at the US southern border.

Earlier this month, unaccompanied migrant children spent an average of about 122 hours in Customs and Border Protection custody, longer than the 72 permitted under US law, according to data obtained by CNN.

The Biden administration has made significant progress in transferring children out of Border Patrol holding facilities, reducing the number kids in its custody by half from its peak last month, according to data released by the government almost daily since March 23. Still, the number of children in CBP custody has averaged around 2,400 for the past week — slightly under the peak in 2019.

HHS has been able to expand its capacity to house more children by opening a string of temporary shelters. As of April 21, the agency was responsible for caring for more than 21,000 children — surpassing its previous peak of 14,170 children in the fall of 2018.

The ongoing arrivals are likely to continue to overwhelm an already stressed system. A steep rise in migration this early in the year suggests that more families and children will arrive in the coming months. Previous migration waves have peaked in early summer — typically around May and June.

In March, Border Patrol apprehended 18,656 unaccompanied minors at the Southwest border, a record since at least October 2009. It’s about twice as many apprehensions as in February and continues an upward trend dating back to last fall, according to the agency’s data.

March’s figures far exceeded that of previous increases of unaccompanied children at the border, both in 2014 under the Obama administration and in 2019 under former President Donald Trump.

The sudden increase in unaccompanied children entering the United States is driven by a number of factors: the devastation left behind by two major hurricanes that hit Central America last year, the toll of the coronavirus pandemic and a perceived relaxation of enforcement under the Biden administration. Most of the children are fleeing deteriorating conditions in their home countries of Guatemala, Honduras and El Salvador, the data shows. The majority of children who make the dangerous trip to the US border alone are teenagers between the ages of 15 and 17 years old, though many young children also arrive at the border.

The Biden administration is trying to fast-track the process for parents or guardians, many of whom are undocumented, to collect their children while awaiting immigration proceedings and an eventual decision on their status. HHS data shows about 90% of children who have been released went to close relatives, suggesting many have family members in the United States.

HHS has released 135,180 children to US-based sponsors from October 2017 through February 2021. Of those, 43% were discharged to a parent or other legal guardian, 47% were sponsored by another immediate relative, and 10% were released to a distant relative or an unrelated sponsor.

But identifying and vetting an appropriate family member or guardian for each child takes time. HHS has released an average 283 children to a sponsor each day since March 23. In the meantime, hundreds of children continue to arrive and more than 23,000 children remain in US custody.