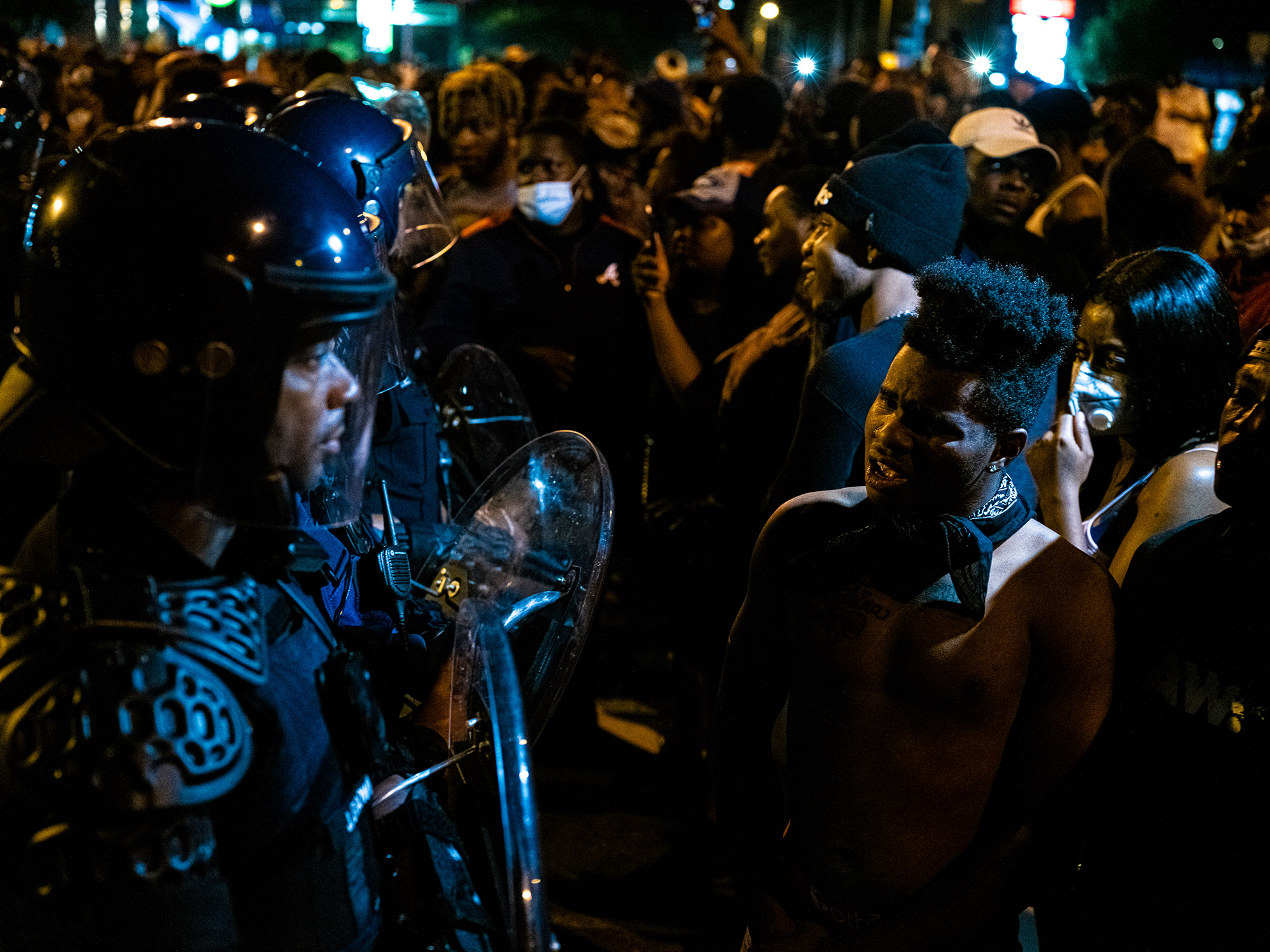 Protesters confront police officers in Atlanta after Rayshard Brooks had been fatally shot.

Protesters confront police officers in Atlanta after Rayshard Brooks had been fatally shot.

It has now been a month since George Floyd was killed in Minneapolis, sparking worldwide protests that are still going on today.

In the middle of a pandemic, people have taken to the streets to denounce systemic racism and police brutality.

“They're putting their lives on the line to fight for justice,” said Joshua Rashaad McFadden, a photographer who has been documenting the demonstrations for weeks. 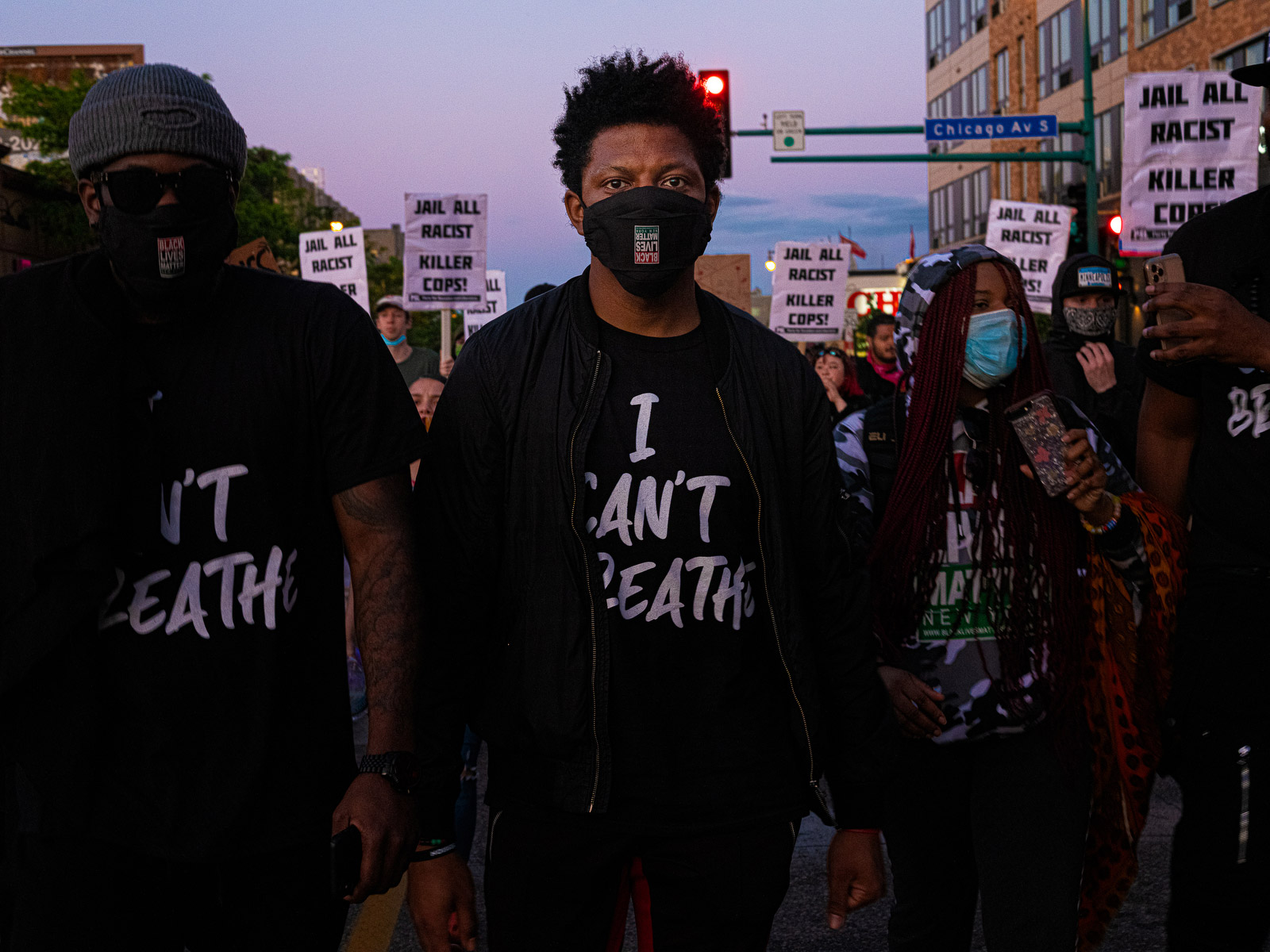 Protesters in Minneapolis march in the aftermath of George Floyd’s death. 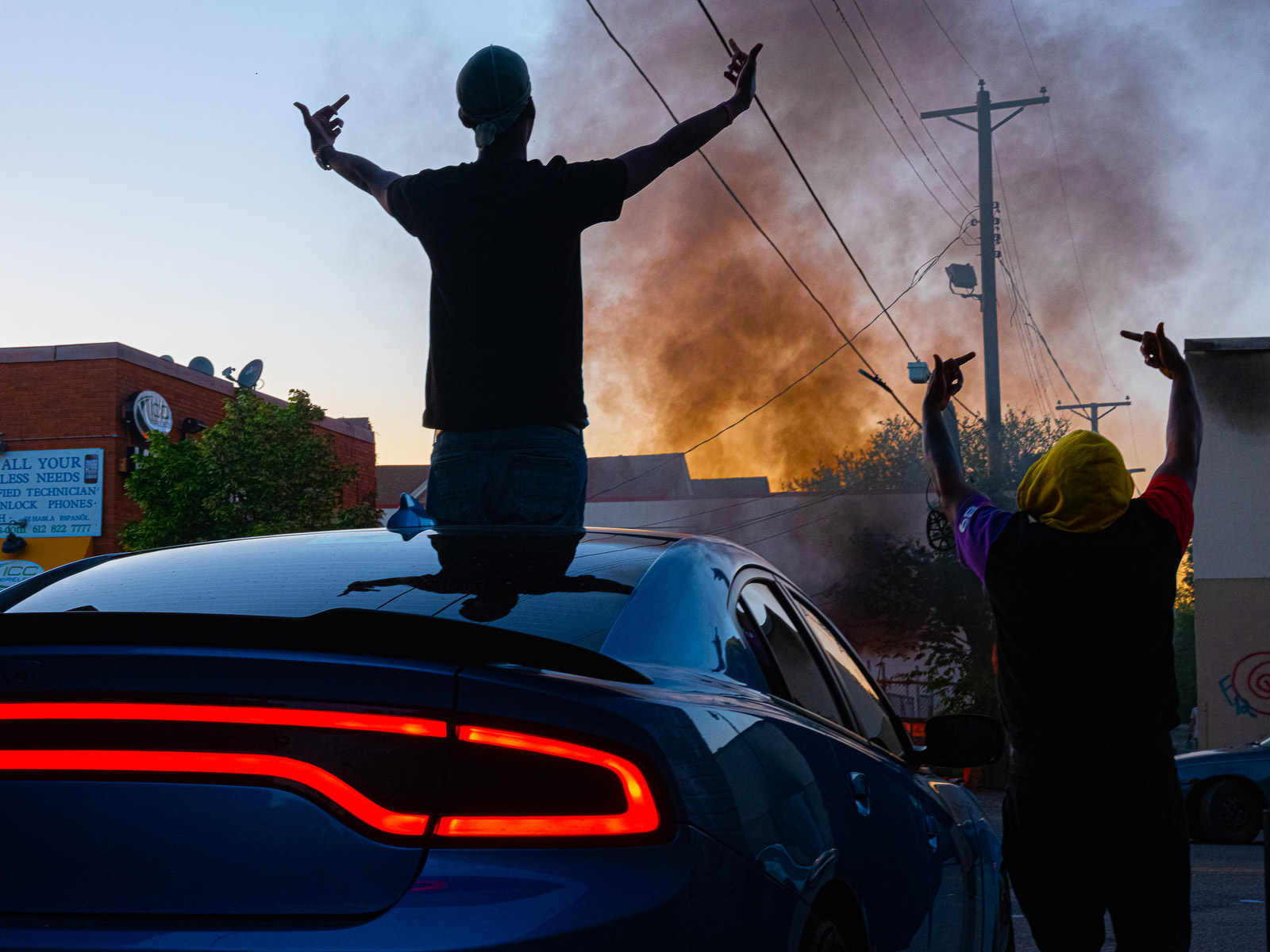 Protesters in Minneapolis face police and express their displeasure. 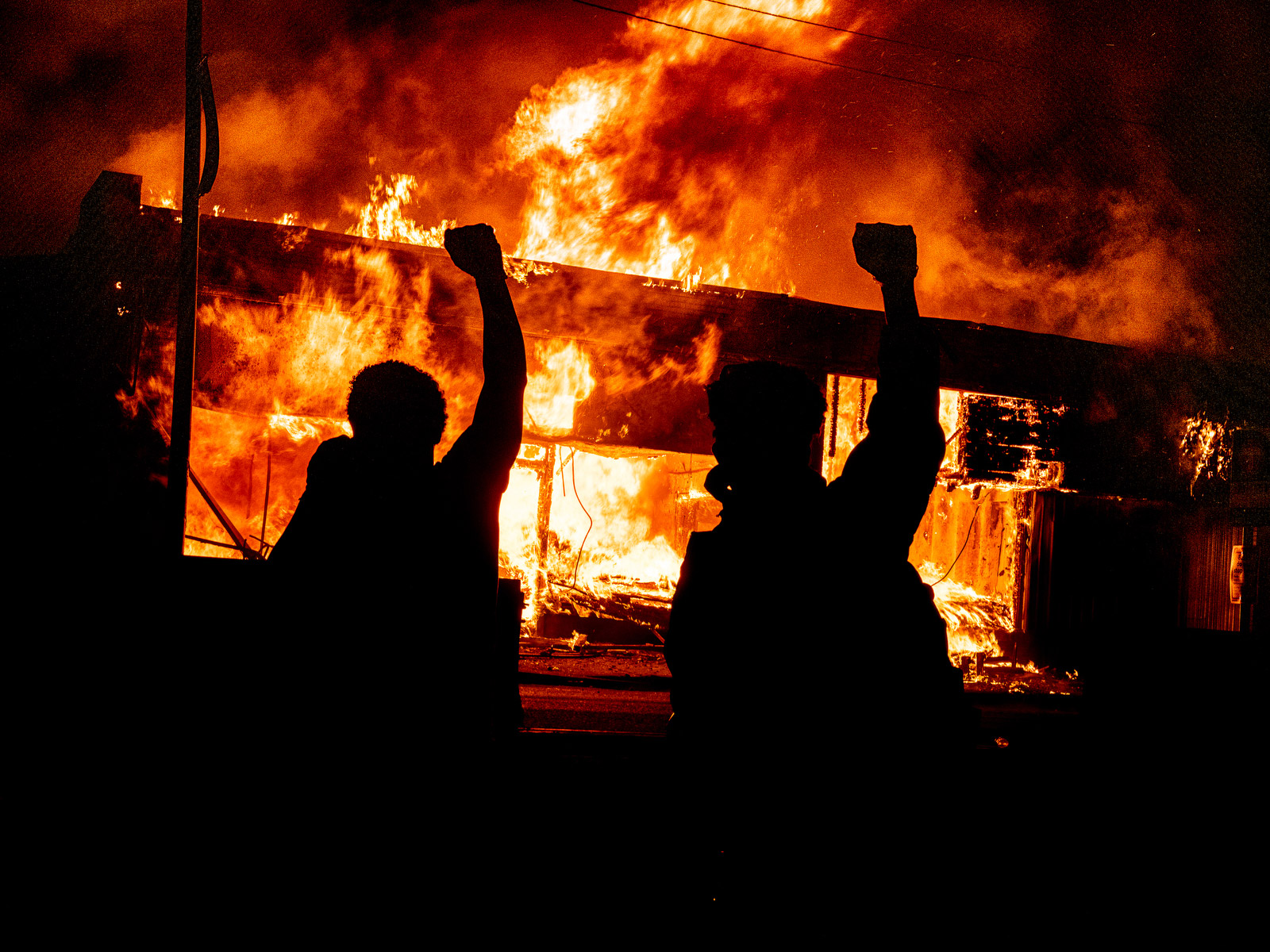 A building burns in Minneapolis after a night of protests.

When the protests first began in Minneapolis, McFadden felt like he needed to be there. So he drove overnight from his home in Rochester, New York.

“In Minneapolis, the whole city is in terrible pain and you can just feel it. You can see it,” he said. “Right when I got there, there was just a sadness.”

The streets quickly began to fill up with protesters. People were everywhere, marching on the streets and raising fists from their cars. Some people brought ladders and protested from the rooftops. 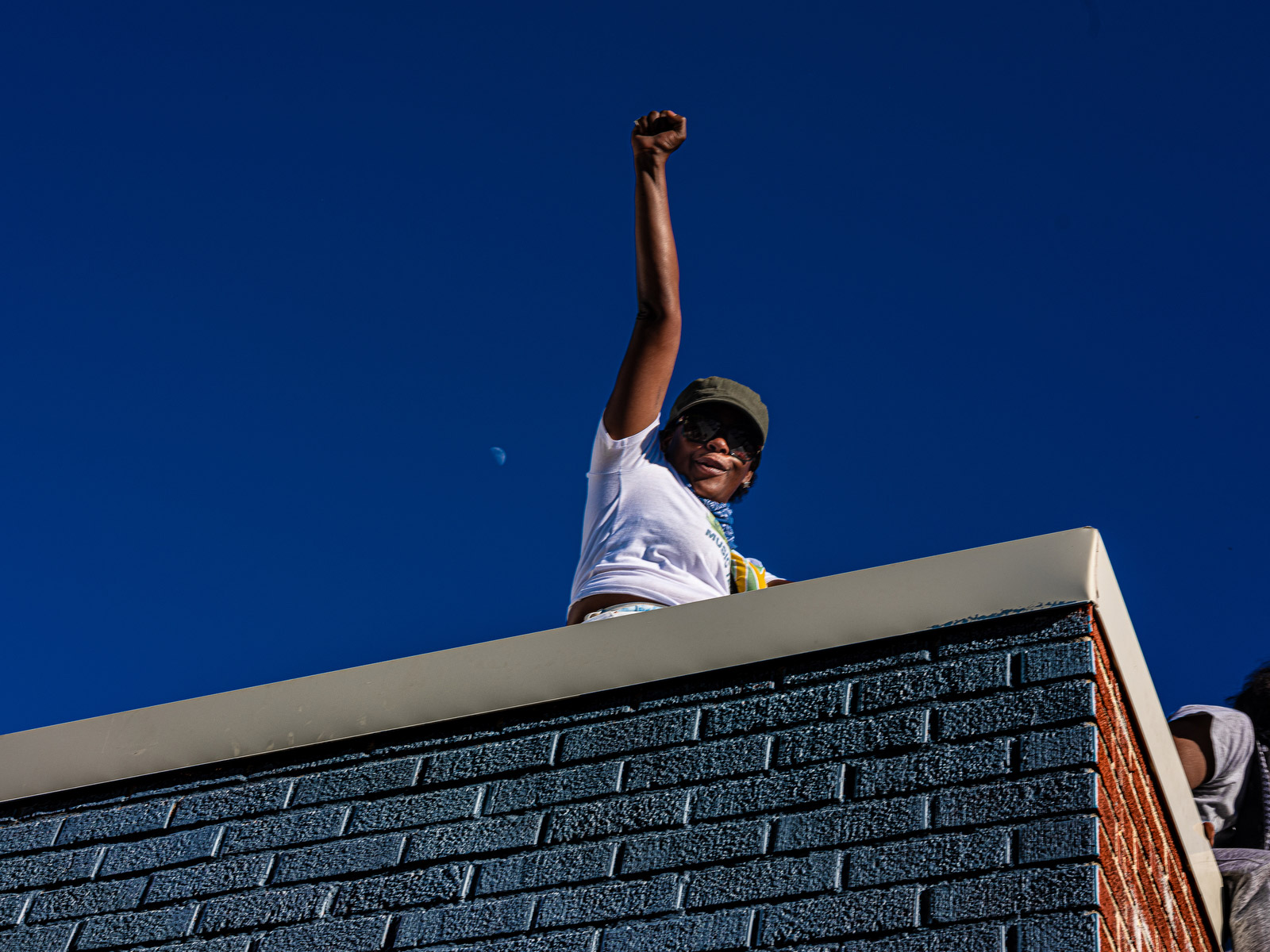 A protester raises a fist from a rooftop in Minneapolis. 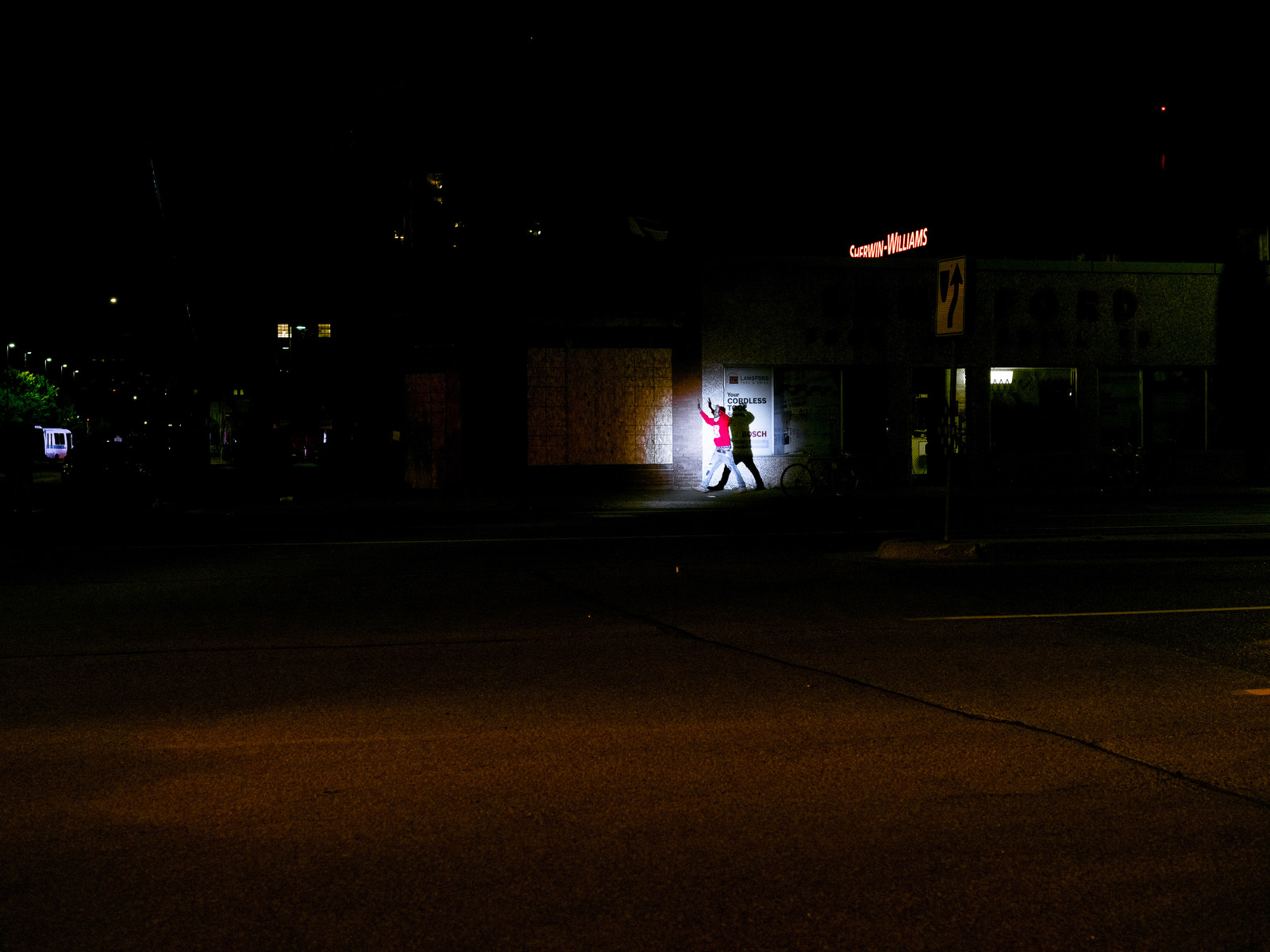 Law enforcement shines a light on a man during the Minneapolis protests. A curfew had been set in response to the unrest.

McFadden covered Floyd’s funeral for The New York Times and then drove south to cover protests in Atlanta, where he got his master’s degree and had an internship at The Martin Luther King Jr. Center for Nonviolent Social Change.

The night that he got there, Rayshard Brooks was fatally shot by police at an Atlanta fast-food restaurant.

“These two situations have now caught the attention of the world in a way we haven't really seen,” McFadden said. “We have seen it kind of with Trayvon Martin and Ferguson and Baltimore. But there weren't protests in every single state like it is now and then all over the world.” 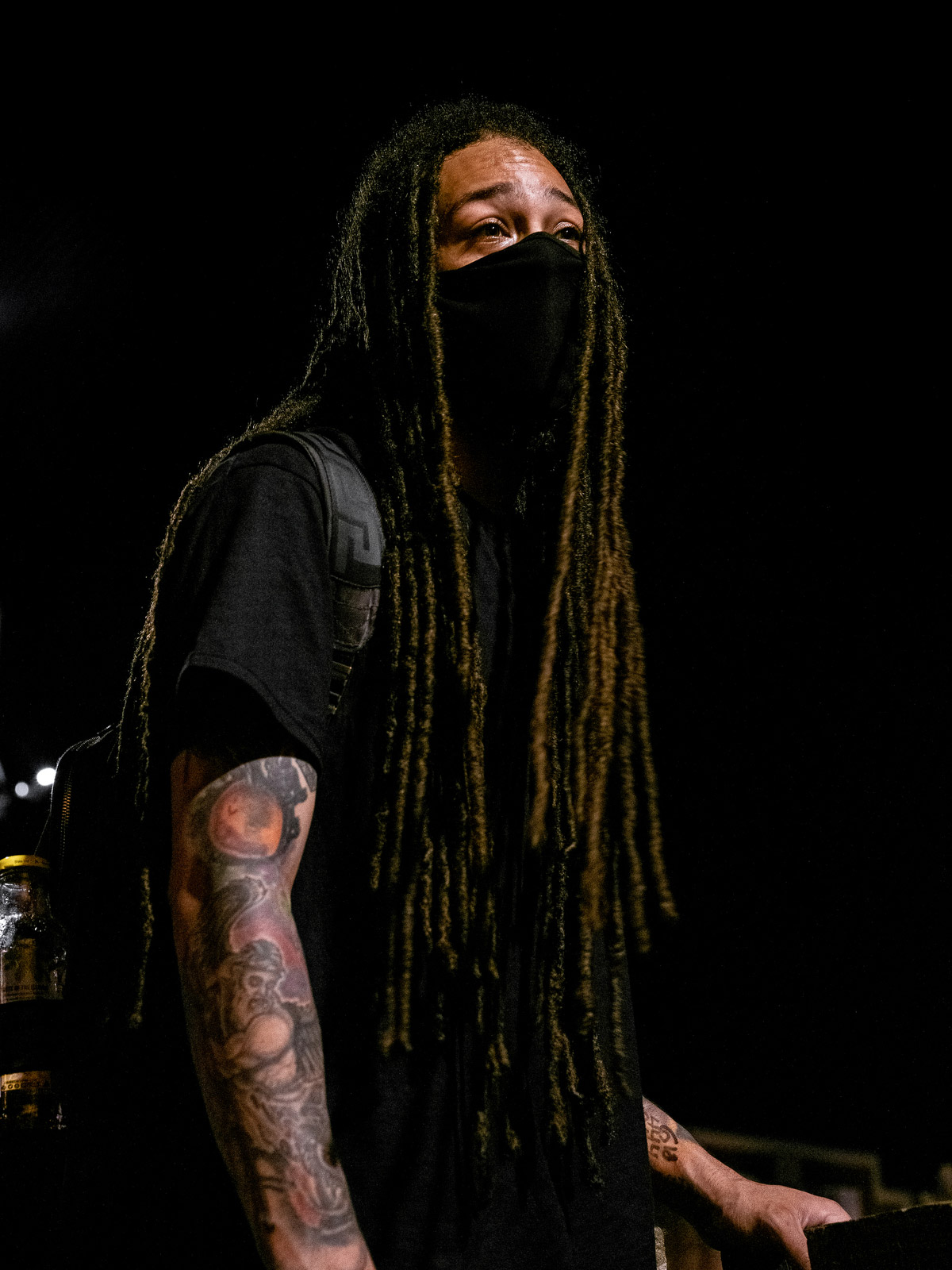 A Minneapolis protester looks over a barricade that was set up to protect the makeshift memorial of George Floyd. 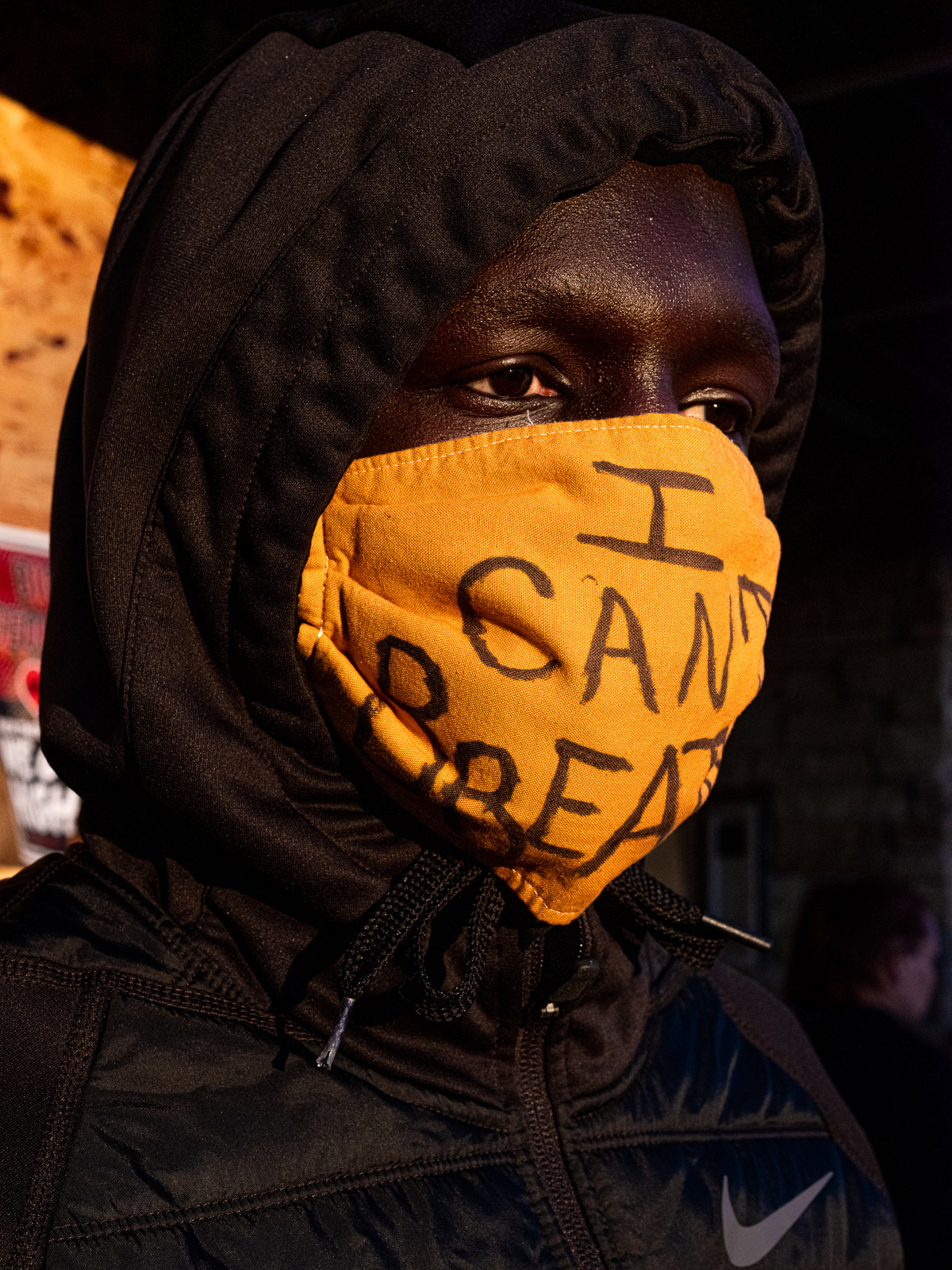 A protester’s mask says “I can’t breathe,” which George Floyd repeated moments before his death. The phrase has been a rallying cry of the Black Lives Matter movement since Eric Garner uttered the words while in an officer’s chokehold in 2014.

McFadden, who is Black, says he identifies with the protesters and their cause.

“Meeting the families of these men who were killed, they just felt like my family,” he said.

He wants other people to feel that connection, too. 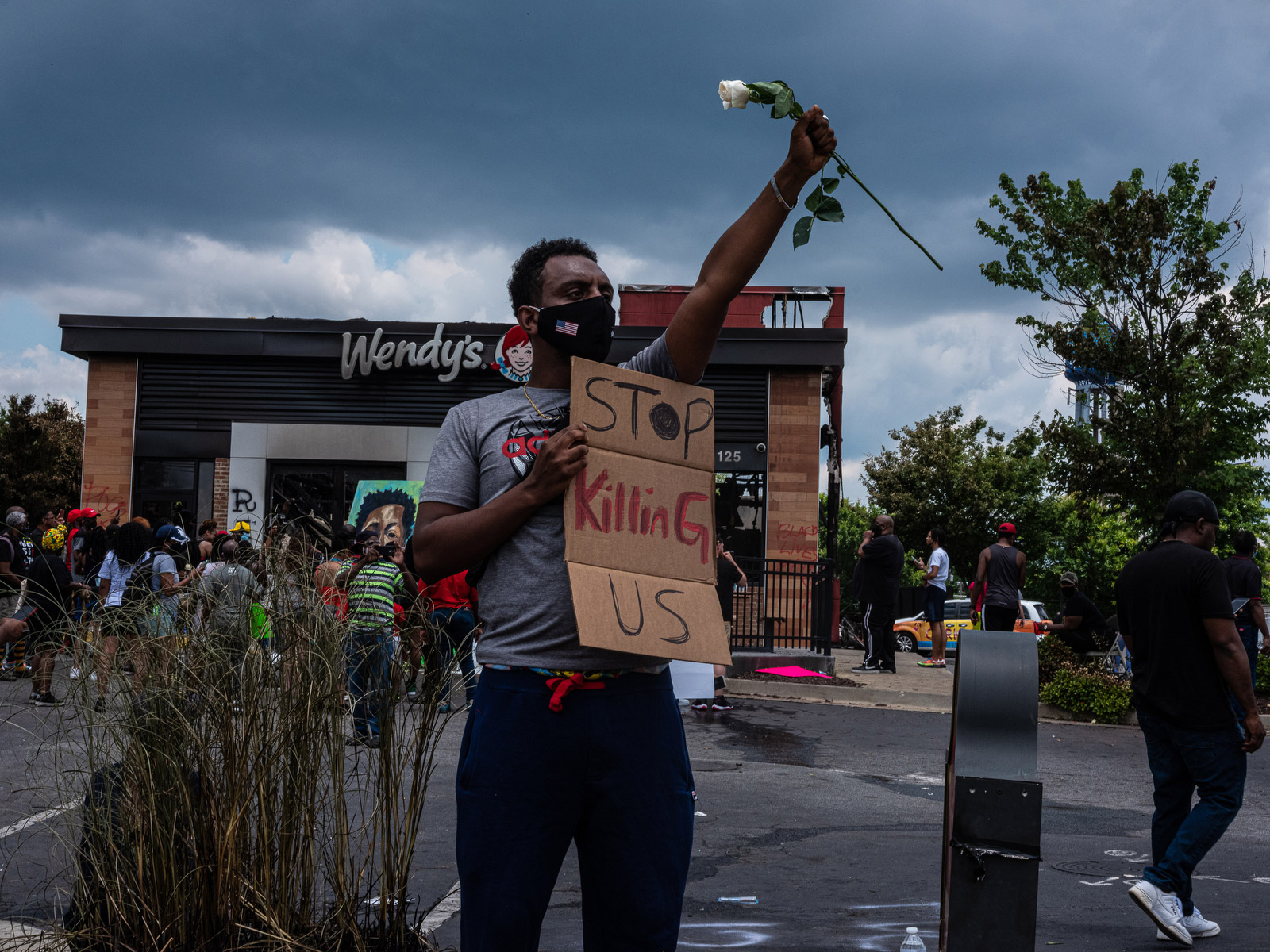 A man protests outside the Wendy’s restaurant where police confronted Rayshard Brooks in Atlanta. 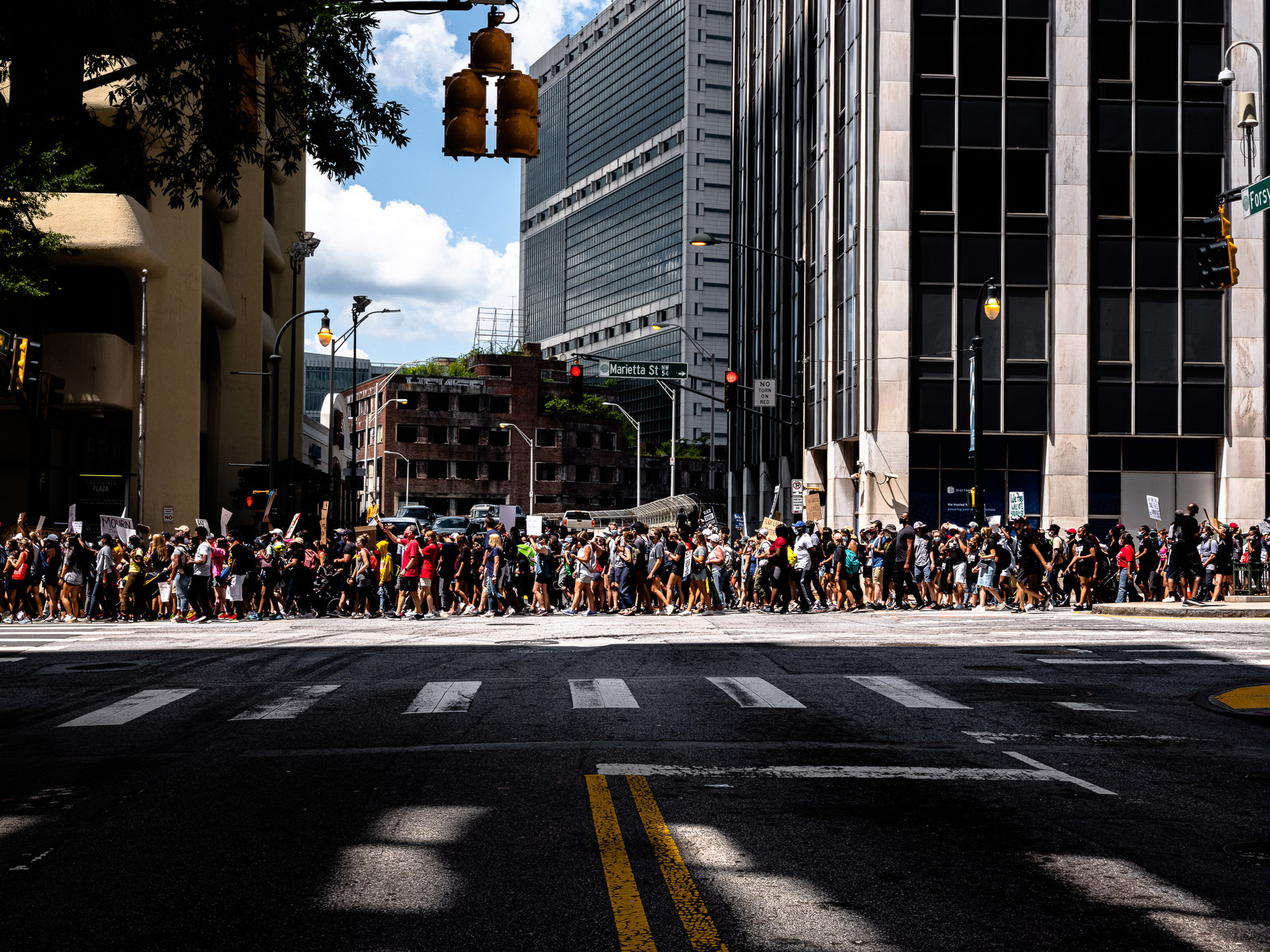 Thousands march in Atlanta during a Juneteenth rally on June 19. The Juneteenth holiday commemorates the end of slavery in the United States. 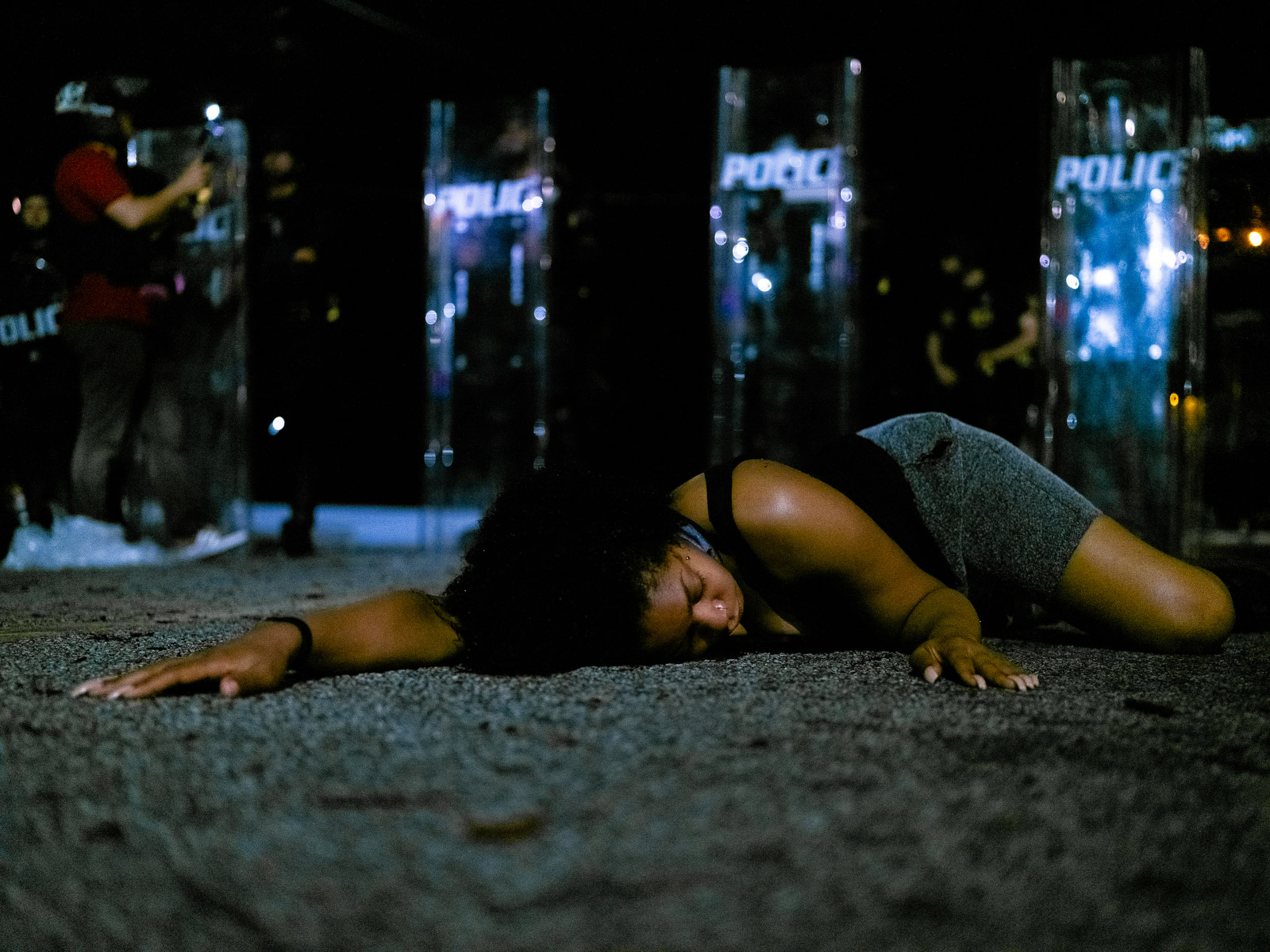 A woman in Atlanta takes part in a “die-in” protest.

Documenting this story has been an emotional experience for McFadden. While covering a march in Atlanta, he was struck by how much it reminded him of the civil-rights movement.

“Being that this is the home of Dr. Martin Luther King Jr., I couldn’t help but cry,” he wrote on Instagram.

McFadden tries to channel his emotion into his work so that it can connect with more people.

“People have been saying that they can feel the images, and I think that's really what my goal is,” he said. “Not just to observe. You can observe things that are going on. But can you feel it? That is my goal. … Hopefully, through these images, people will be inspired to act and be inspired to change their ways of thinking.” 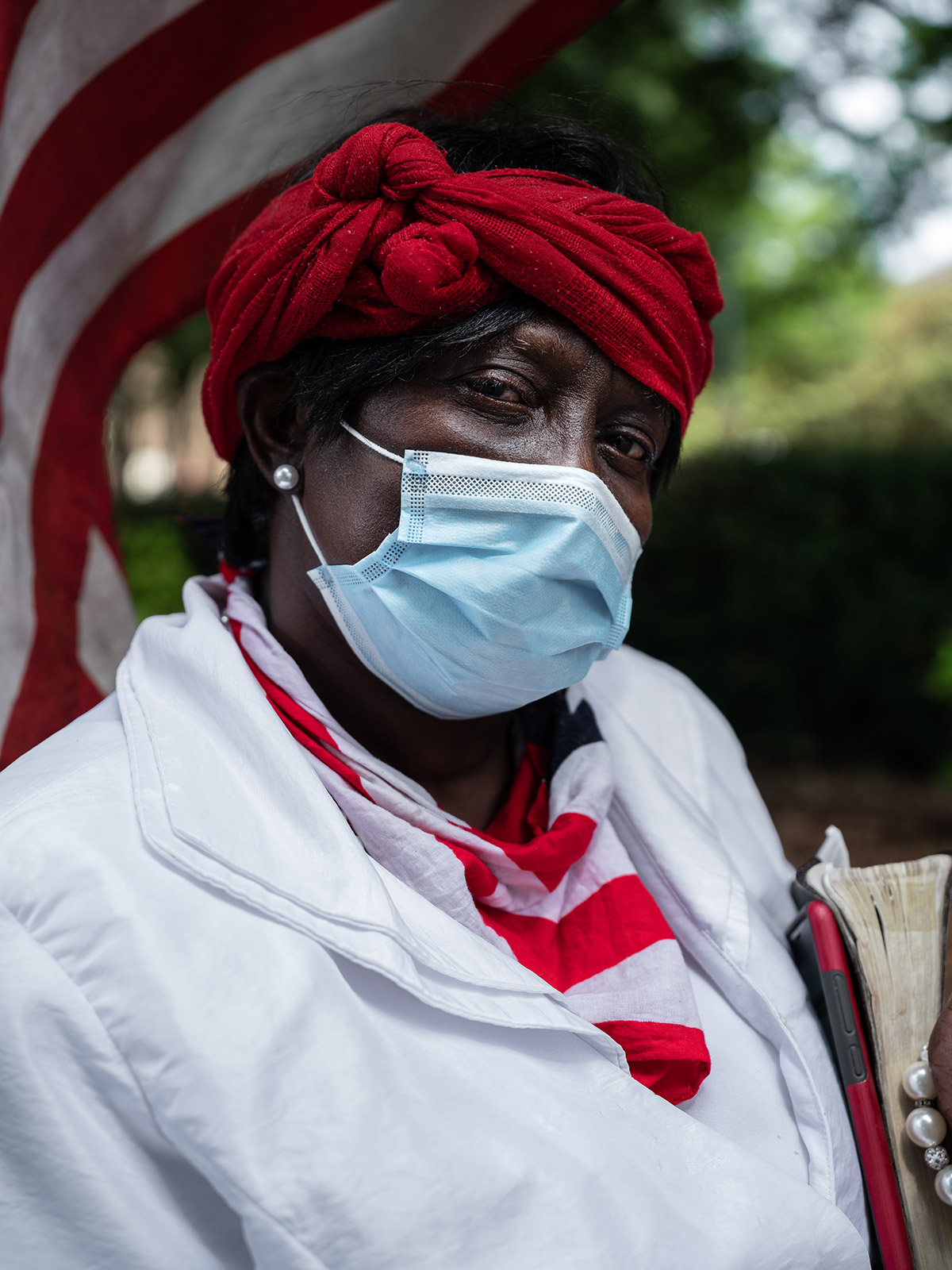 "We old people have got to stand up for the young generation," Missionary G.A. Breedlove said at Rayshard Brooks’ funeral. "They're out there marching. We can't march. But we can support them with our voices and show up and speak! ... We're all God's people, and justice is for all of us." 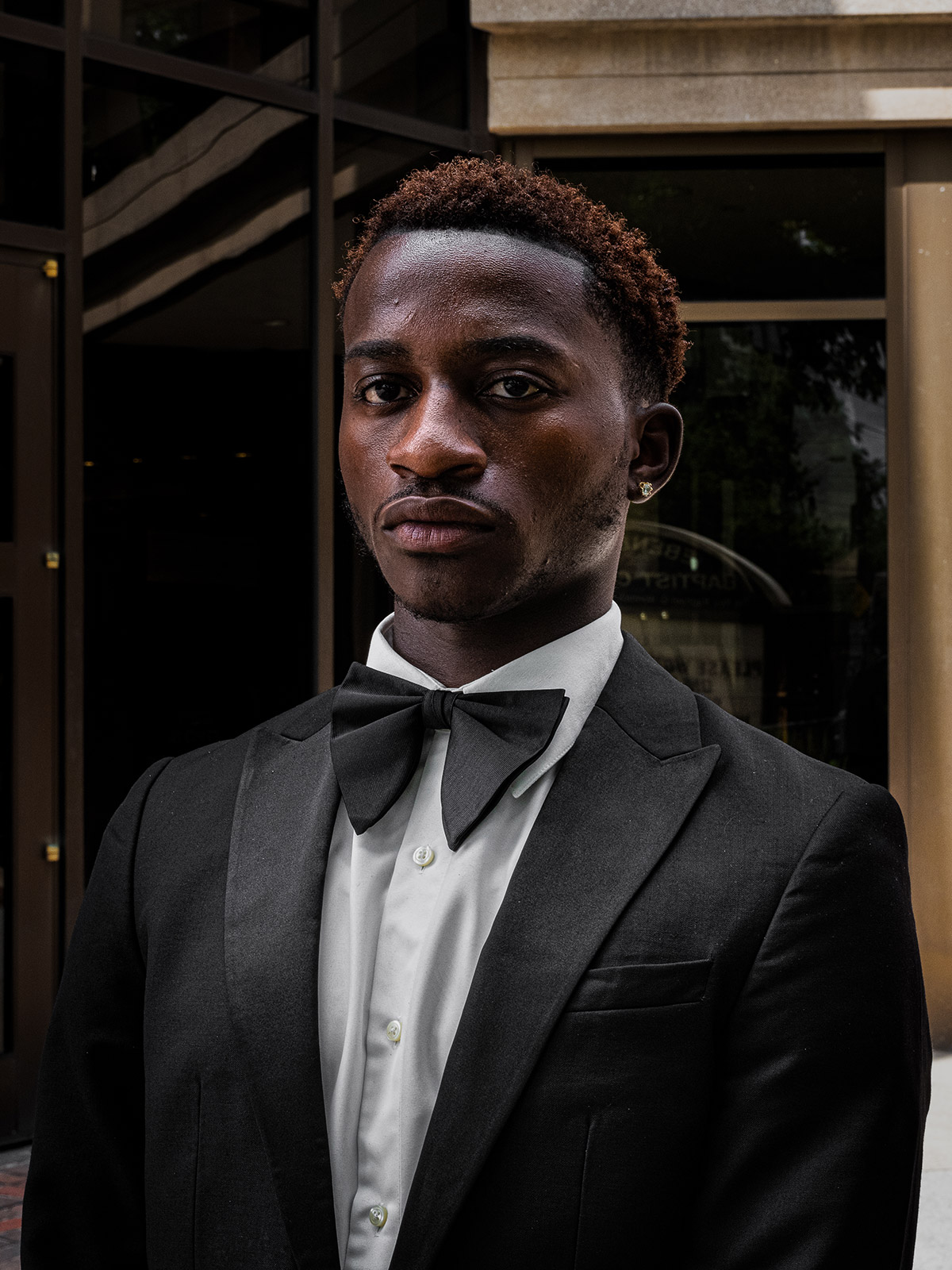 Jalen Shaw, a 21-year-old Morehouse College student originally from Little Rock, Arkansas, was volunteering at Brooks’ funeral on behalf of the NAACP. "When I heard about what happened to Rayshard Brooks, I was devastated to find out that the life of another young Black male was taken away due to violence that did not have to take place. ... Rayshard's life will not be in vain, and his light will shine bright forever.”

It’s also important to McFadden that more Black photographers are given the chance to tell these stories.

“And so if there's not a balance in who is creating these images — also a balance in how these images are dispersed throughout the media — then they're no better than police or whoever is kind of organizing these unjust ways of dispersing information.” 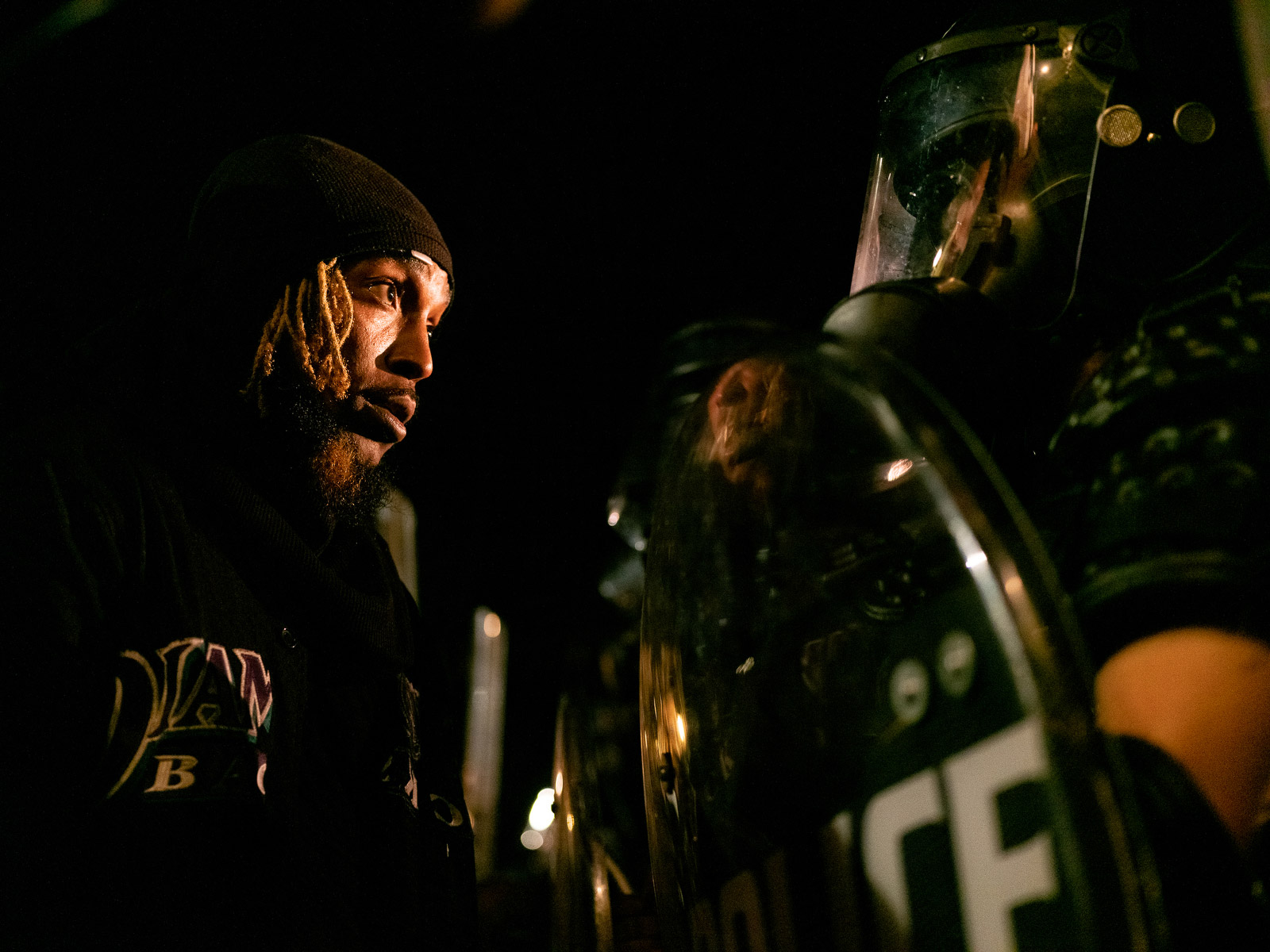 A protester stands by a police line in Atlanta. 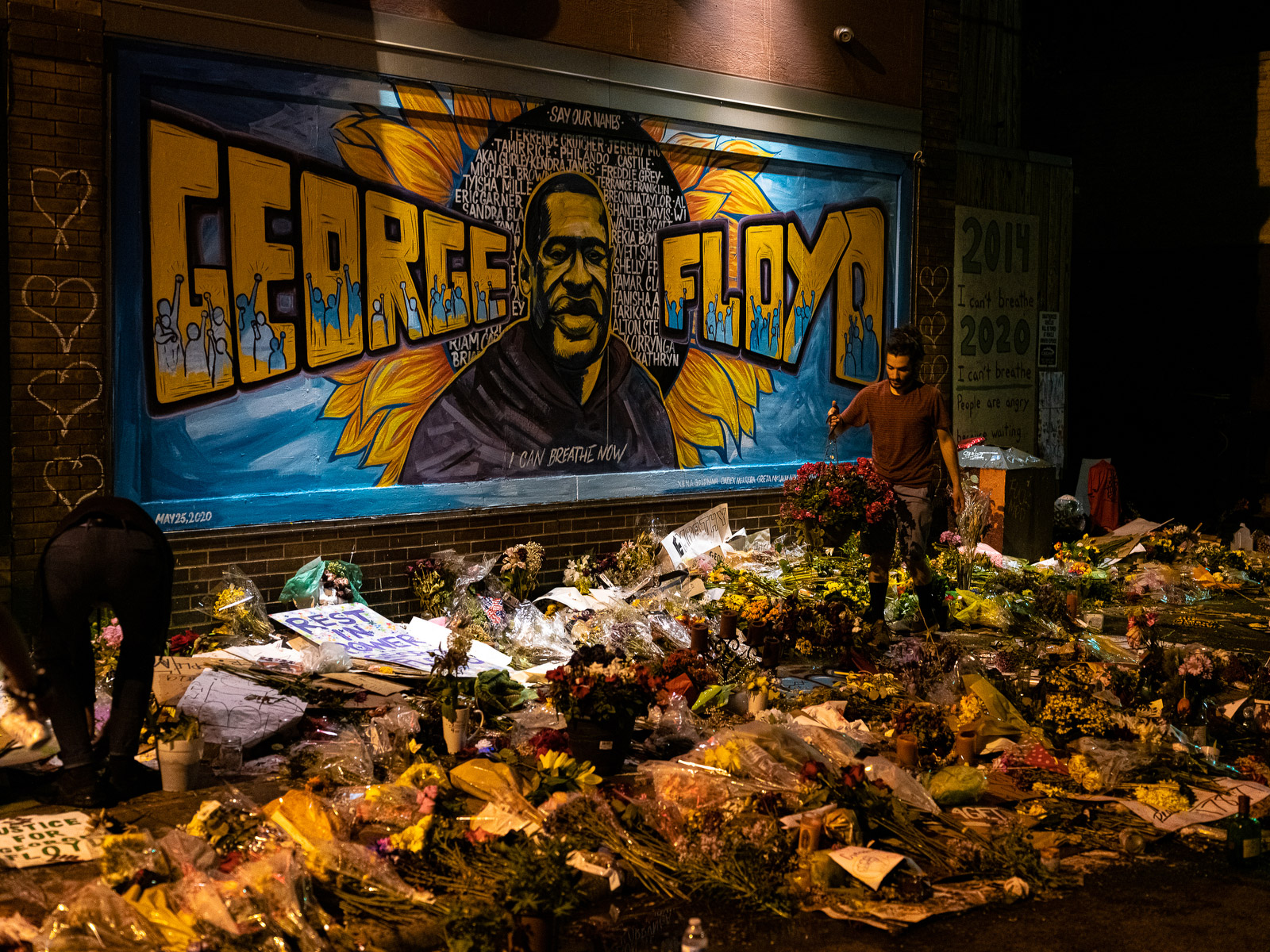 Volunteers help tidy up George Floyd’s memorial site in Minneapolis. “Every day, there were more flowers, there were different art pieces that would just go up overnight,” McFadden said. “To see that change every day was beautiful.”

McFadden said he still encounters resistance in the field because of the color of his skin. Floyd’s funeral’s was yet another example, as he said he was often told to leave his position or get out.

“Even though I had my press credential on and the all-access pass, it seemed like I was being told to leave even though the White photographers were not,” he said.

“That kind of thing doesn't only happen in these instances. … It's like an everyday thing that you have to prove that you are professional.” 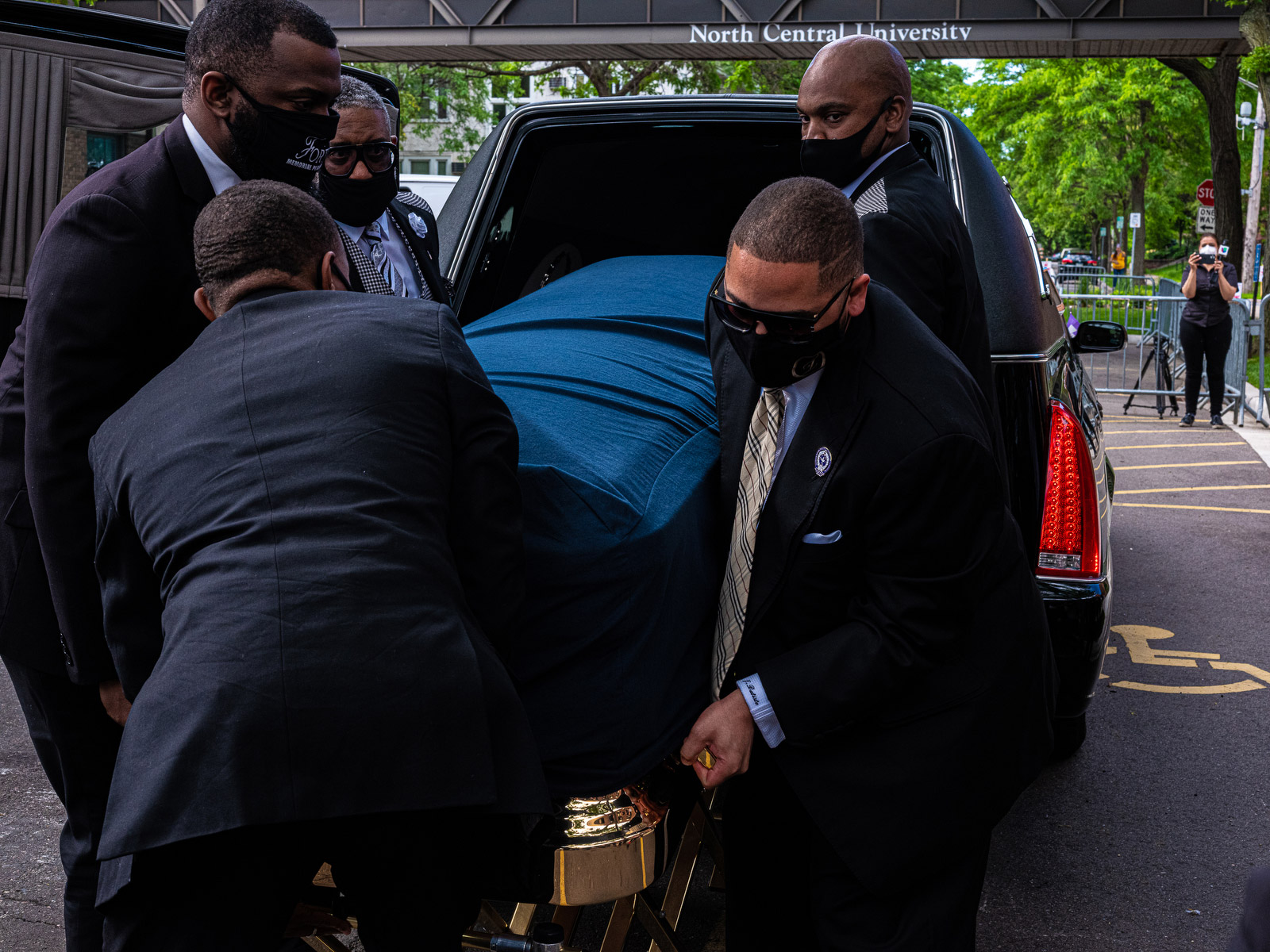 George Floyd’s casket is carried to his memorial service in Minneapolis. 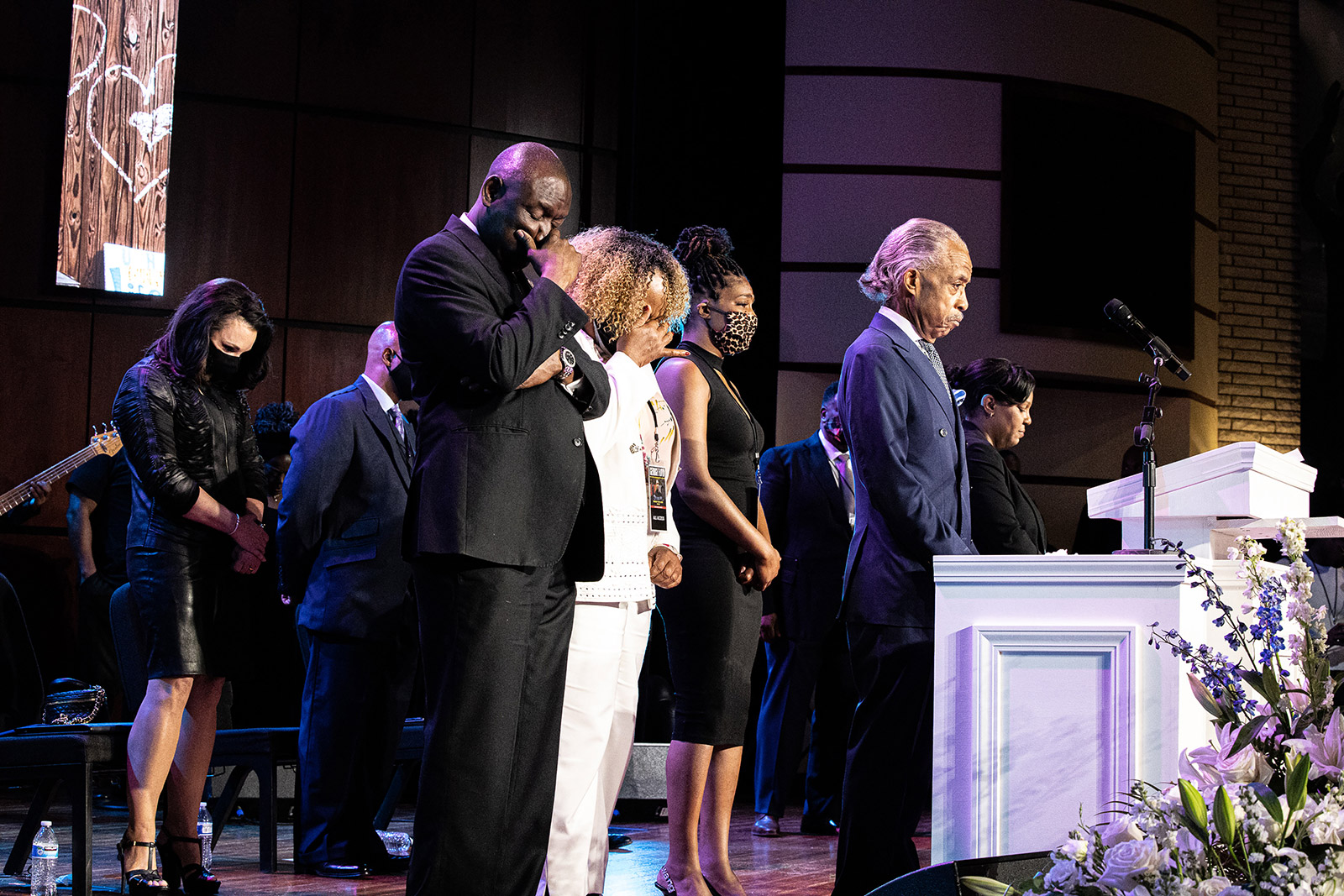 The Rev. Al Sharpton delivered the eulogy at Floyd’s memorial service in Minneapolis. Here, he leads a standing tribute of 8 minutes and 46 seconds, the length of time that the police officer had his knee on Floyd’s neck. 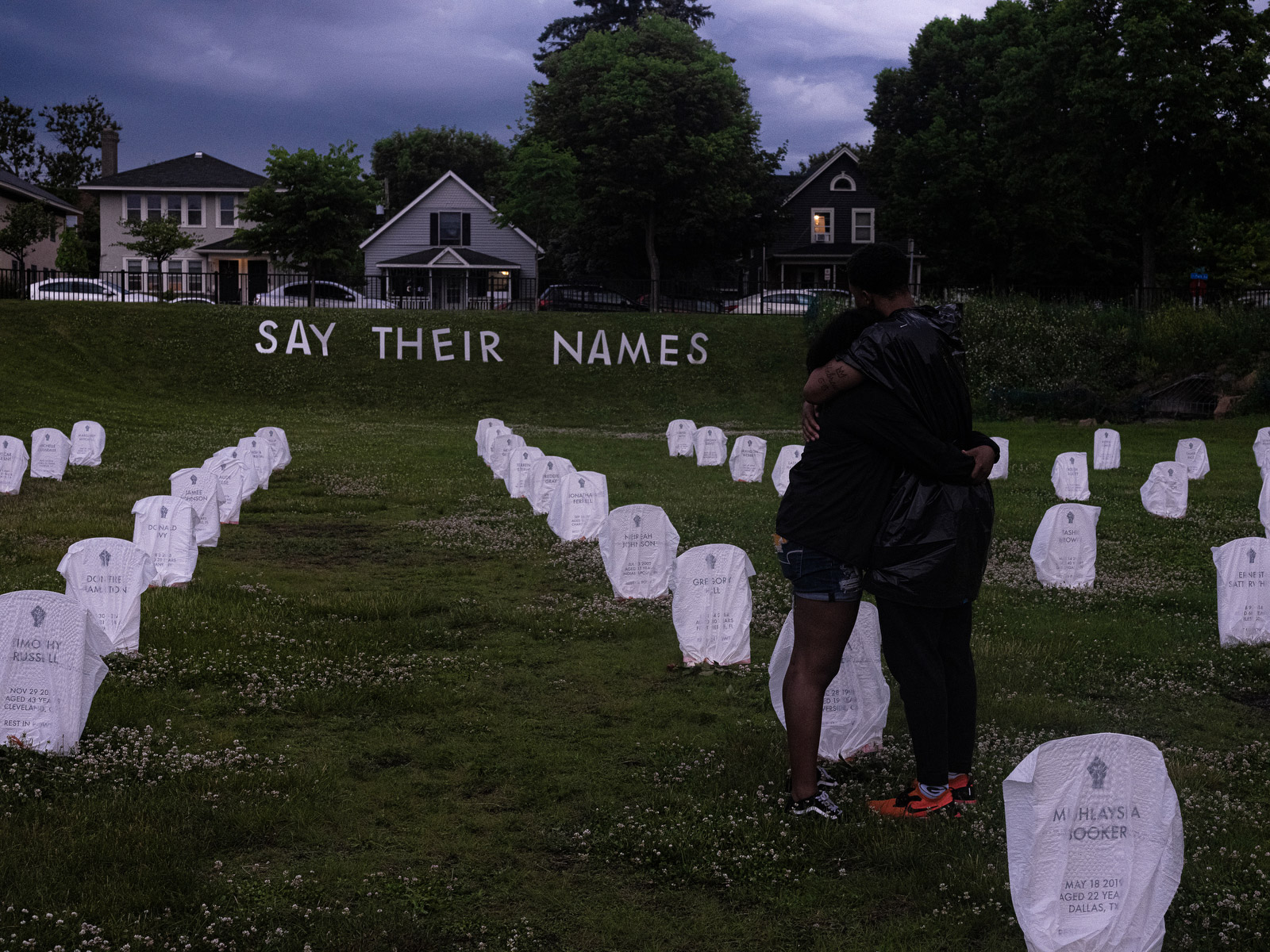 Mock headstones were placed at this makeshift memorial in Minneapolis for people who have been killed by police.

McFadden says these protests feel different than others he has covered in the past.

“I don't think it's going to fade away,” he said. “I see a different energy with the young people that have mobilized.”

These young people have grown up, McFadden said, knowing about the Black Lives Matter movement and seeing so many deaths since Trayvon Martin was killed in 2012.

“People are saying, ‘Wow, we've seen this happen over and over and over again,’ and it's been highly public,” McFadden said. “It's been on social media. It's been in photographs. And I think the video of George Floyd and the video of Rayshard was kind of like the last straw. …

“I am hopeful. I think we will see something change sooner than later this time.” 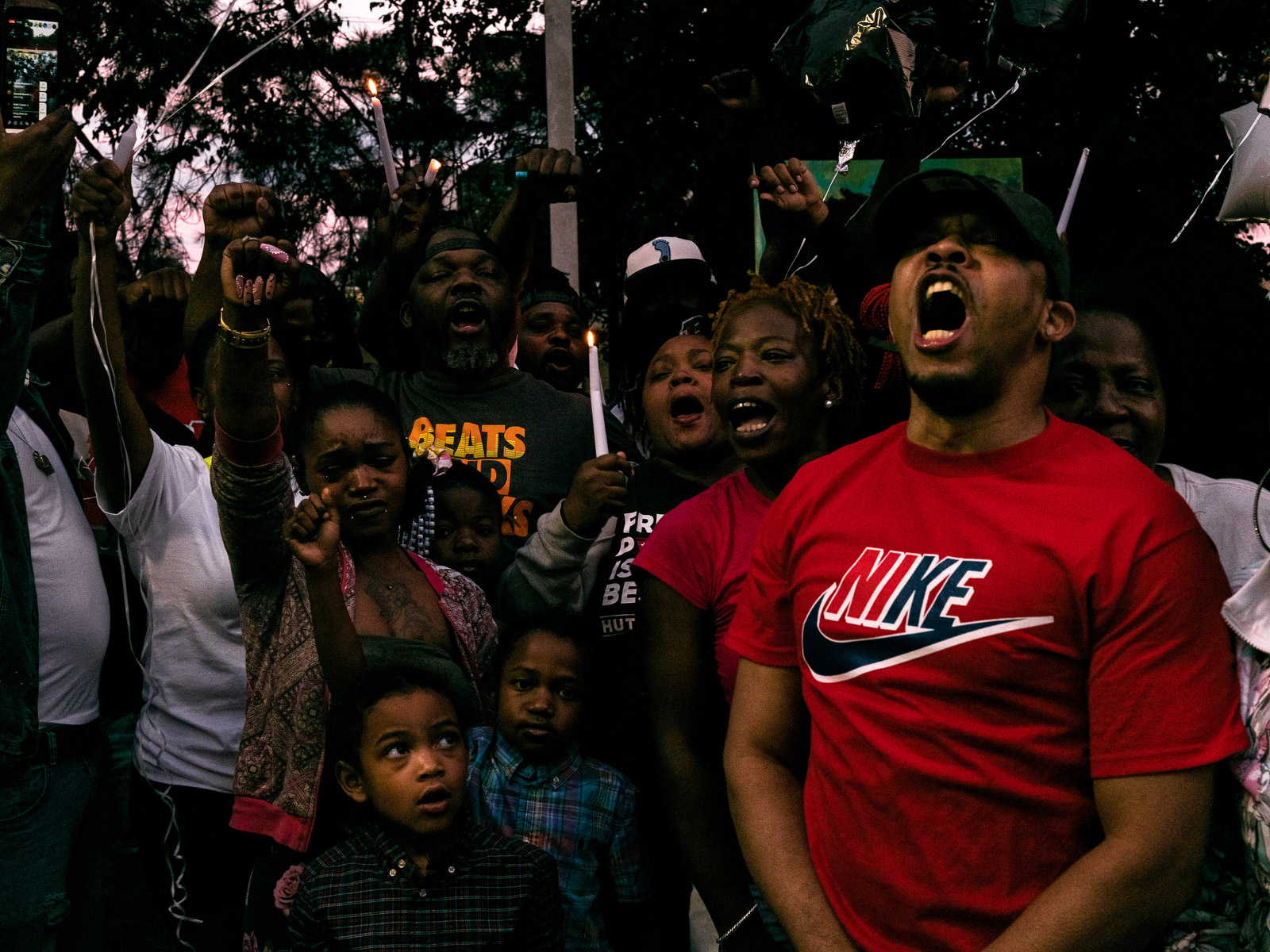 Rayshard Brooks’ family attends a candlelight vigil in his honor. 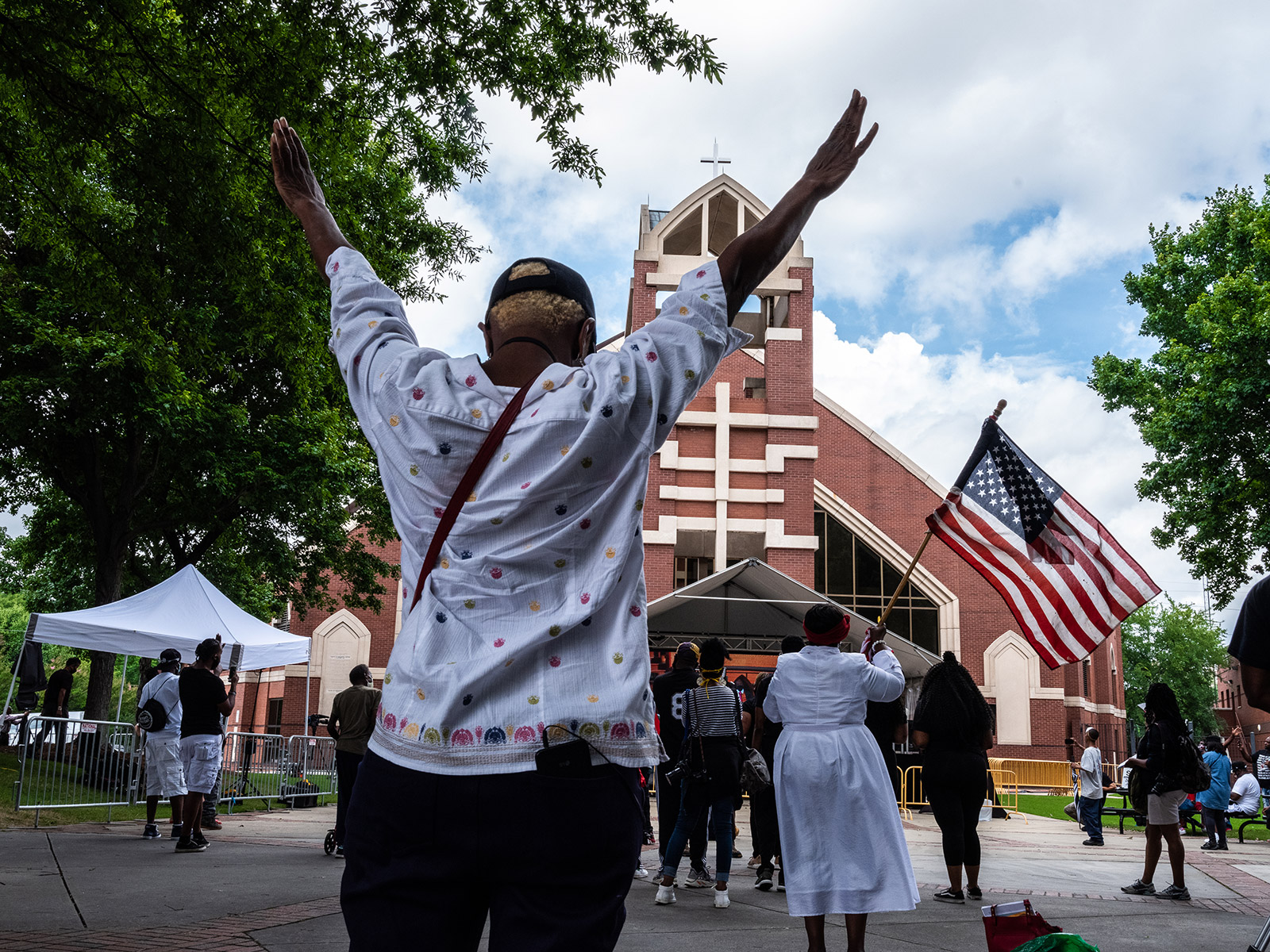 People gather outside the historic Ebenezer Baptist Church, where Brooks’ funeral service took place in Atlanta. Martin Luther King Jr. was as a co-pastor at the church from 1960 until his assassination in 1968.