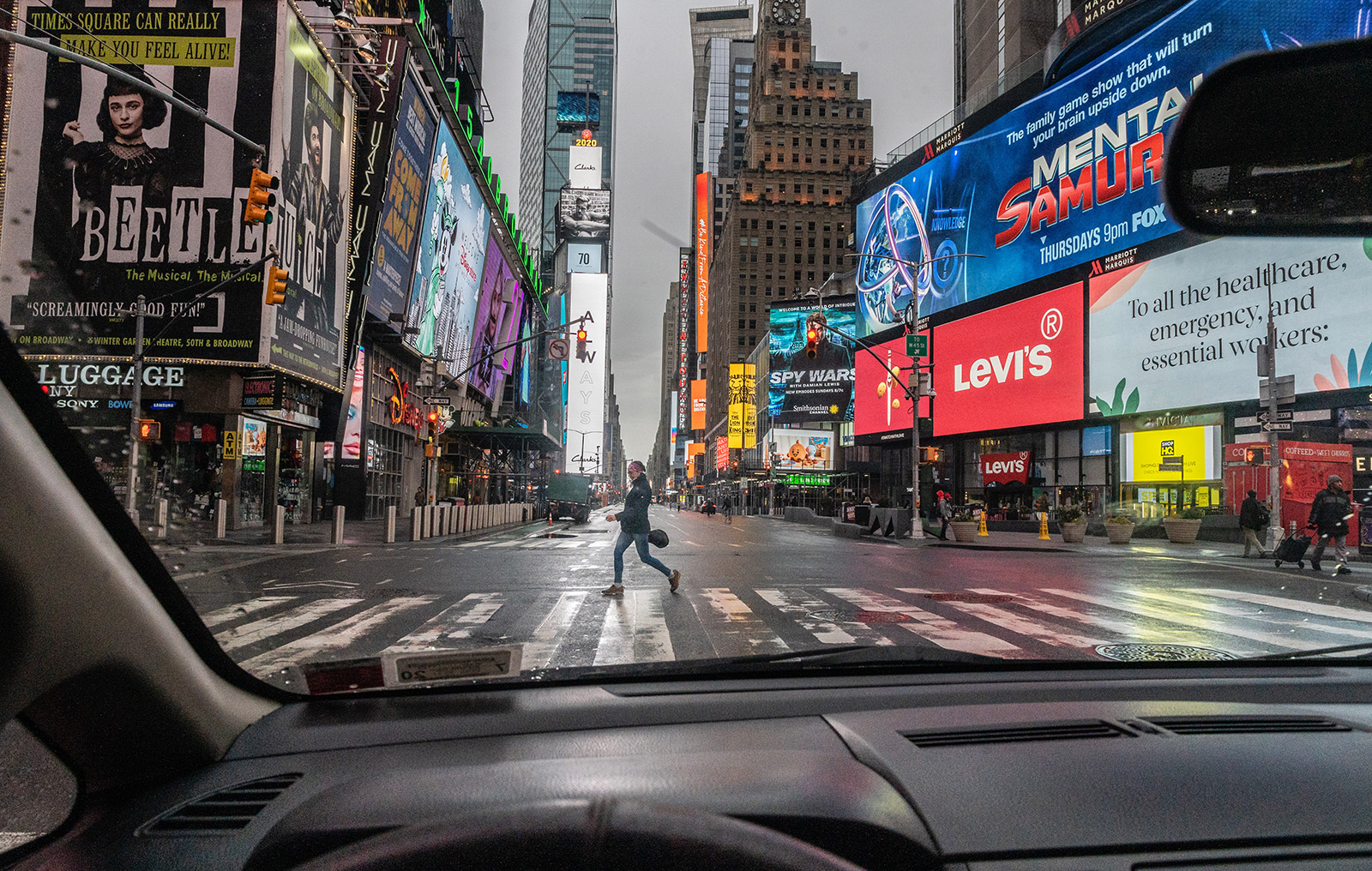 A woman walks in Times Square in late March, when the streets were largely empty.

A woman walks in Times Square in late March, when the streets were largely empty.

There’s still a long way to go, but New York City is taking the first steps in returning to normalcy.

After 78 days of stay-at-home orders — the longest coronavirus lockdown in the country — New York launched Phase One of its reopening plan on Monday, June 8.

That means hundreds of thousands of people can get back to work, including nonessential workers in construction and manufacturing. Retail stores can now set up curbside or in-store pickups.

It’s just a start — the rest of the state is already on Phase Two — but for a city that has been hit hard by Covid-19, it’s an important milestone.

“This is a triumphant moment for New Yorkers who fought back against the disease,” Mayor Bill de Blasio said. 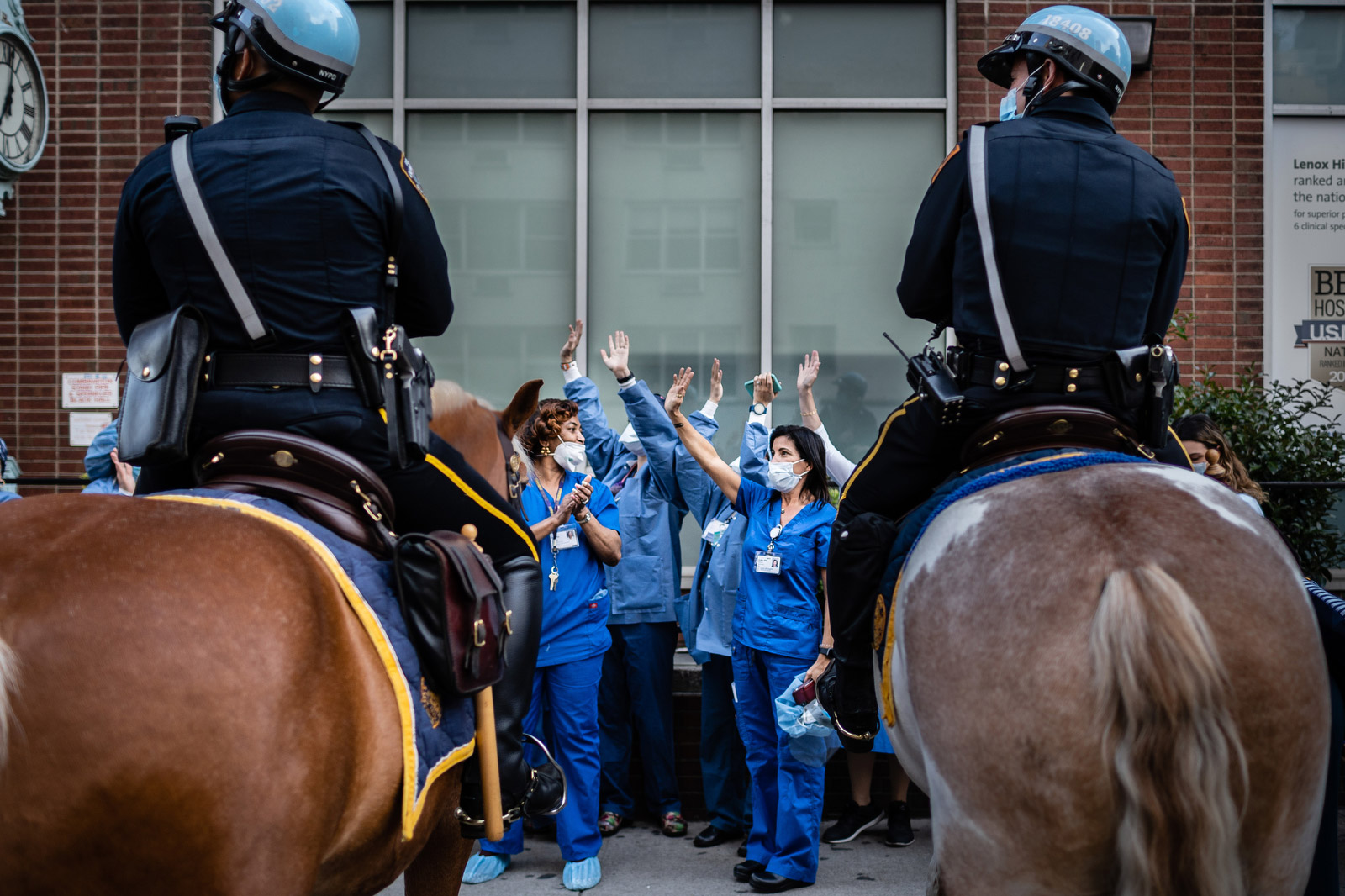 Staff members of Lenox Hill Hospital react as members of the community cheer for them in May. 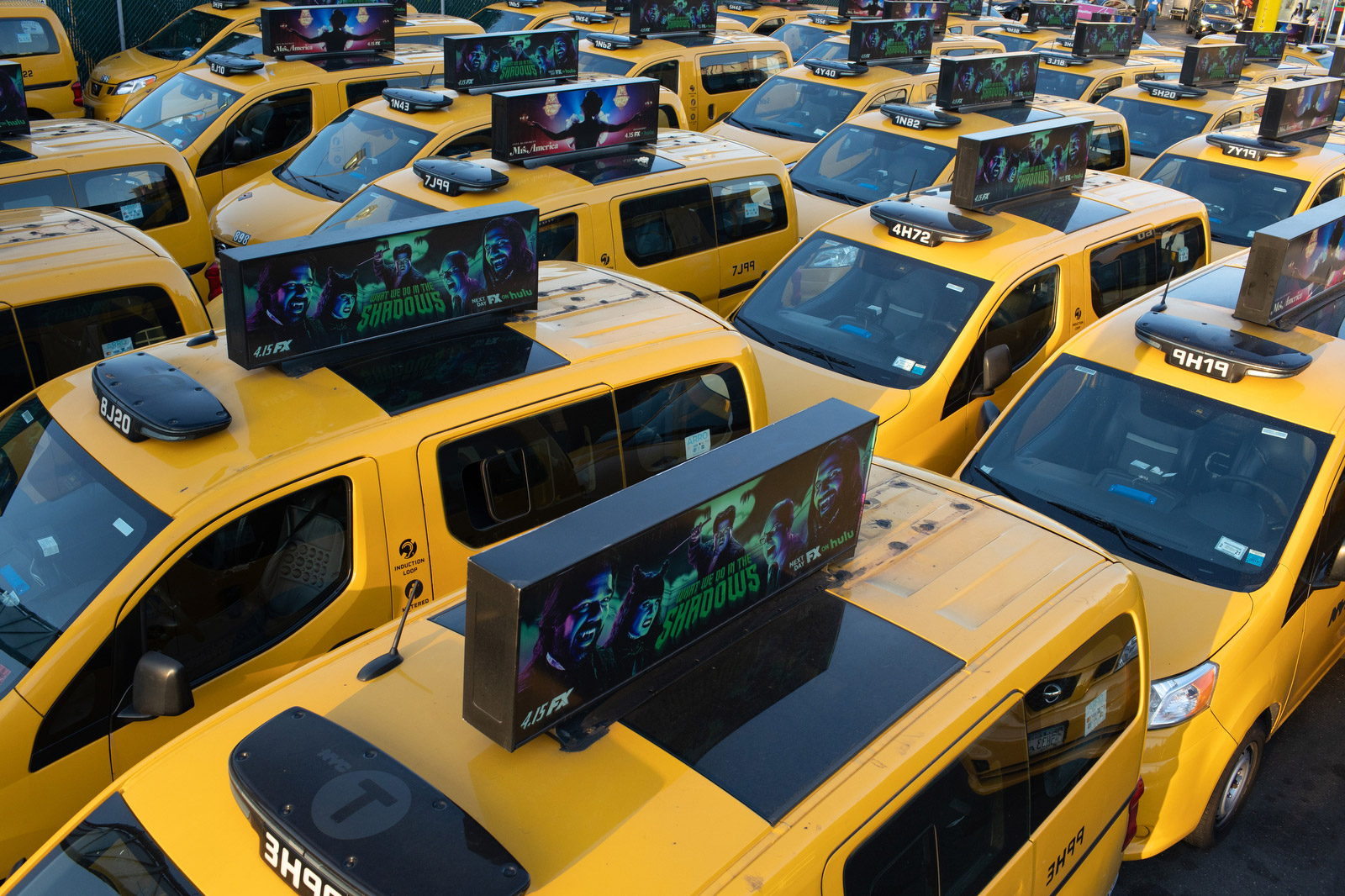 Taxi ridership has plummeted in New York City during the pandemic. Entire fleets have been idle. 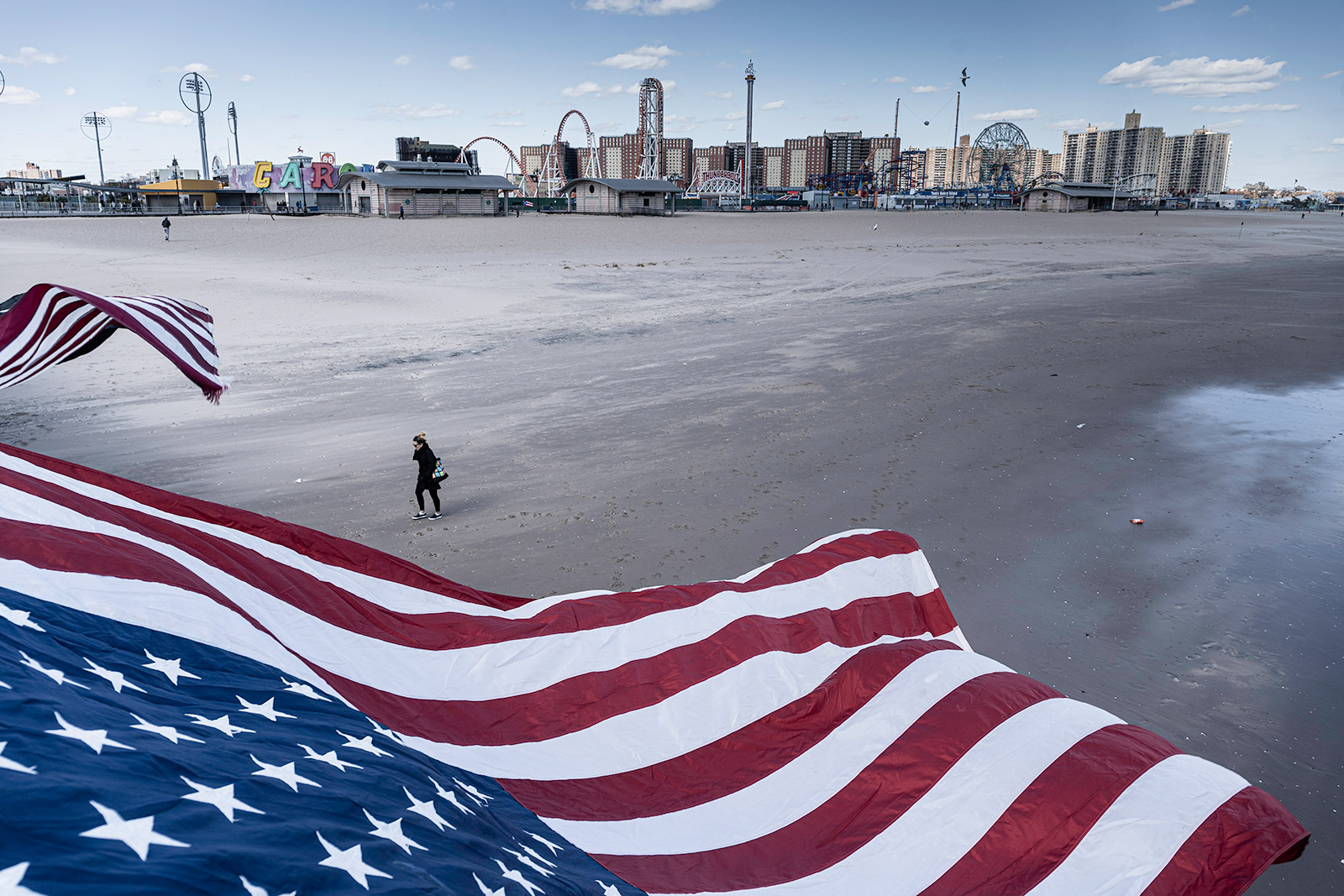 A woman walks along the empty Coney Island beach in Brooklyn, New York, in April.

The coronavirus has ravaged New York City for months, killing more than 20,000 people and overwhelming hospitals and funeral homes.

At the city’s peak in April, more than 500 people died daily.

But the numbers have dropped dramatically in recent weeks. On Wednesday, 36 people died from Covid-19 across the entire state. 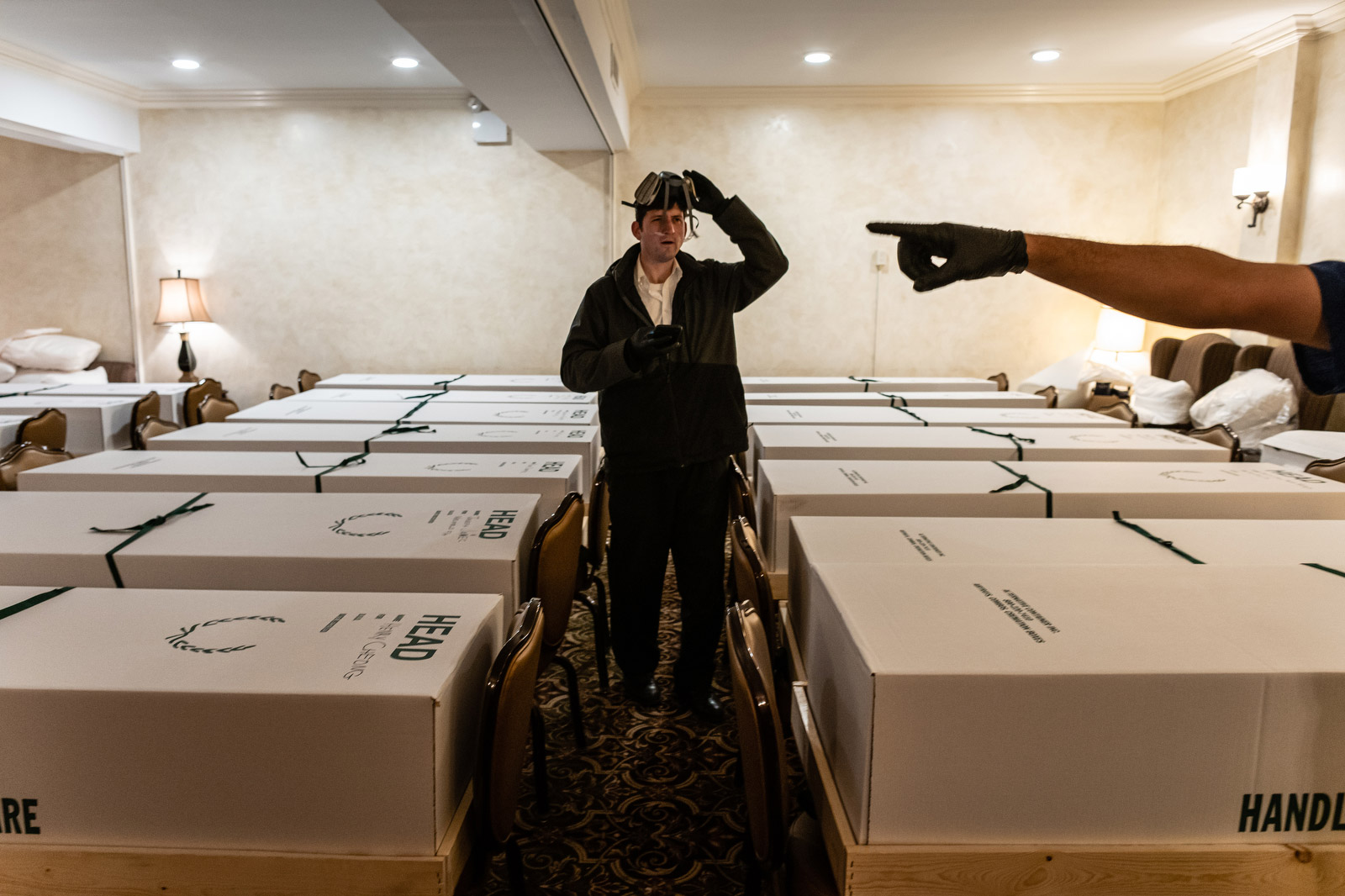 Bodies are prepared at the Gerald Neufeld Funeral Home in Queens so that they can be transported for cremation in April. 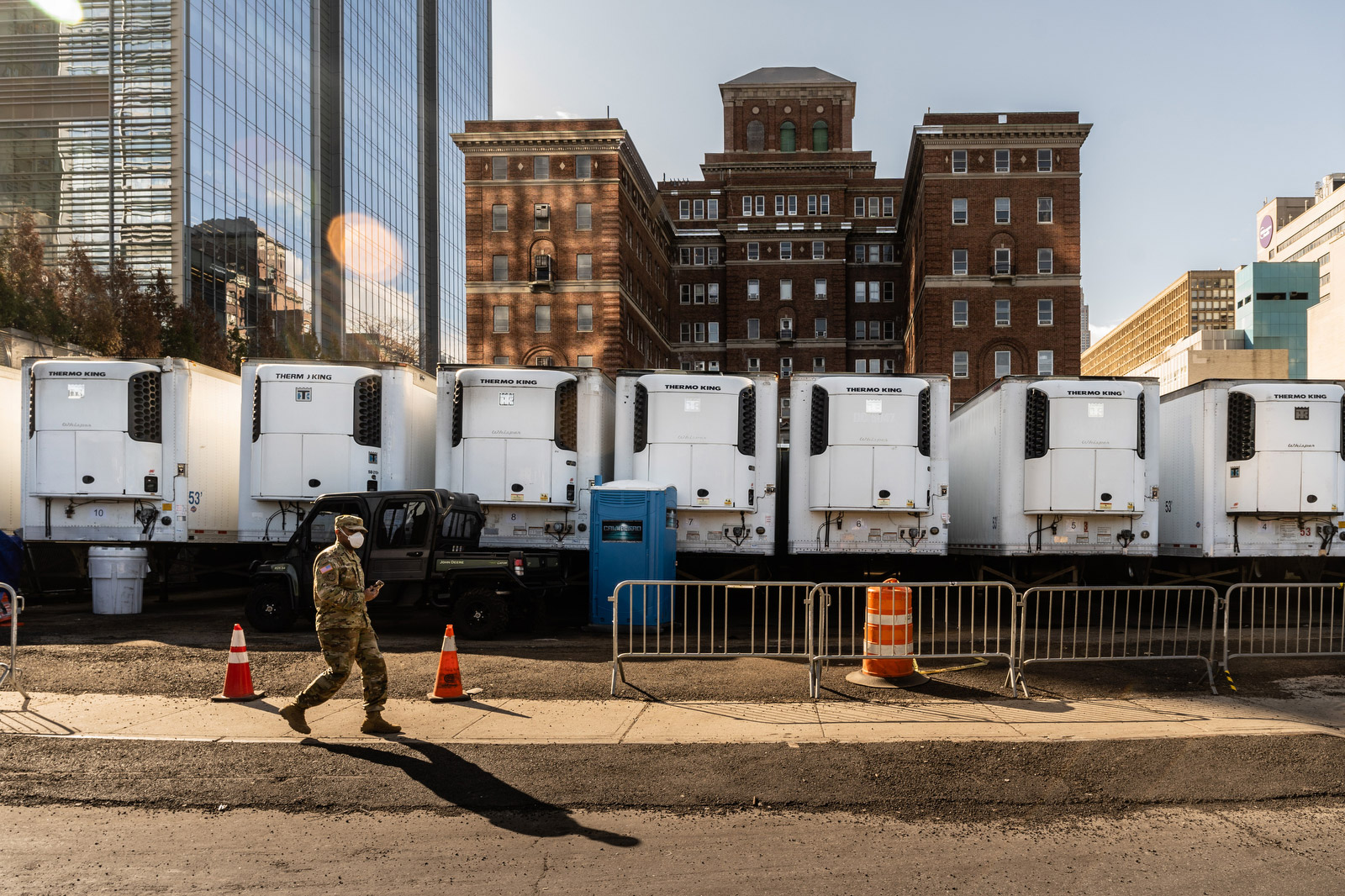 A National Guardsman walks past refrigerated trailers in April that were being used as an outdoor morgue in the Bellevue Hospital parking lot. 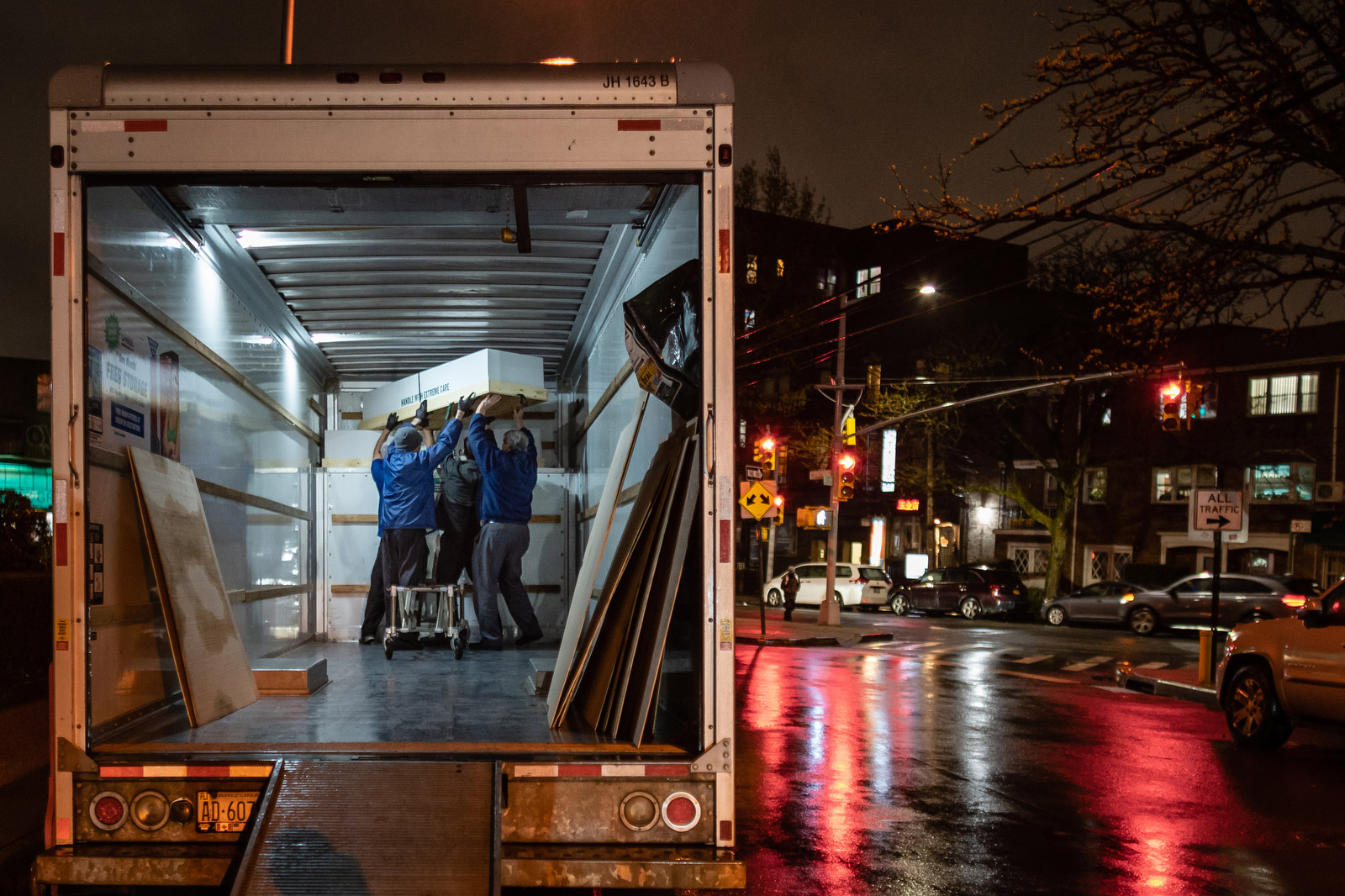 Bodies are packed into the back of a truck in April.

Photographer Timothy Fadek has been documenting New York City since the lockdown started.

He remembers how eerie it was to see his bustling city transformed into a ghost town.

“All you heard were ambulance sirens constantly, especially at the peak, and that was in the midst of a desolate street landscape where there were no cars. There were no people,” Fadek said. “It looked like and it felt like the evening of a heavy snowstorm, when the snow's falling and everyone's home after dinner. … But it was permanent, and during the day — not just at night.”

Over the past few weeks, as coronavirus cases have dropped, Fadek has noticed a change in the city.

He’s hearing fewer ambulance sirens and seeing more people on the streets. Subway ridership is increasing. Parks are filling up. 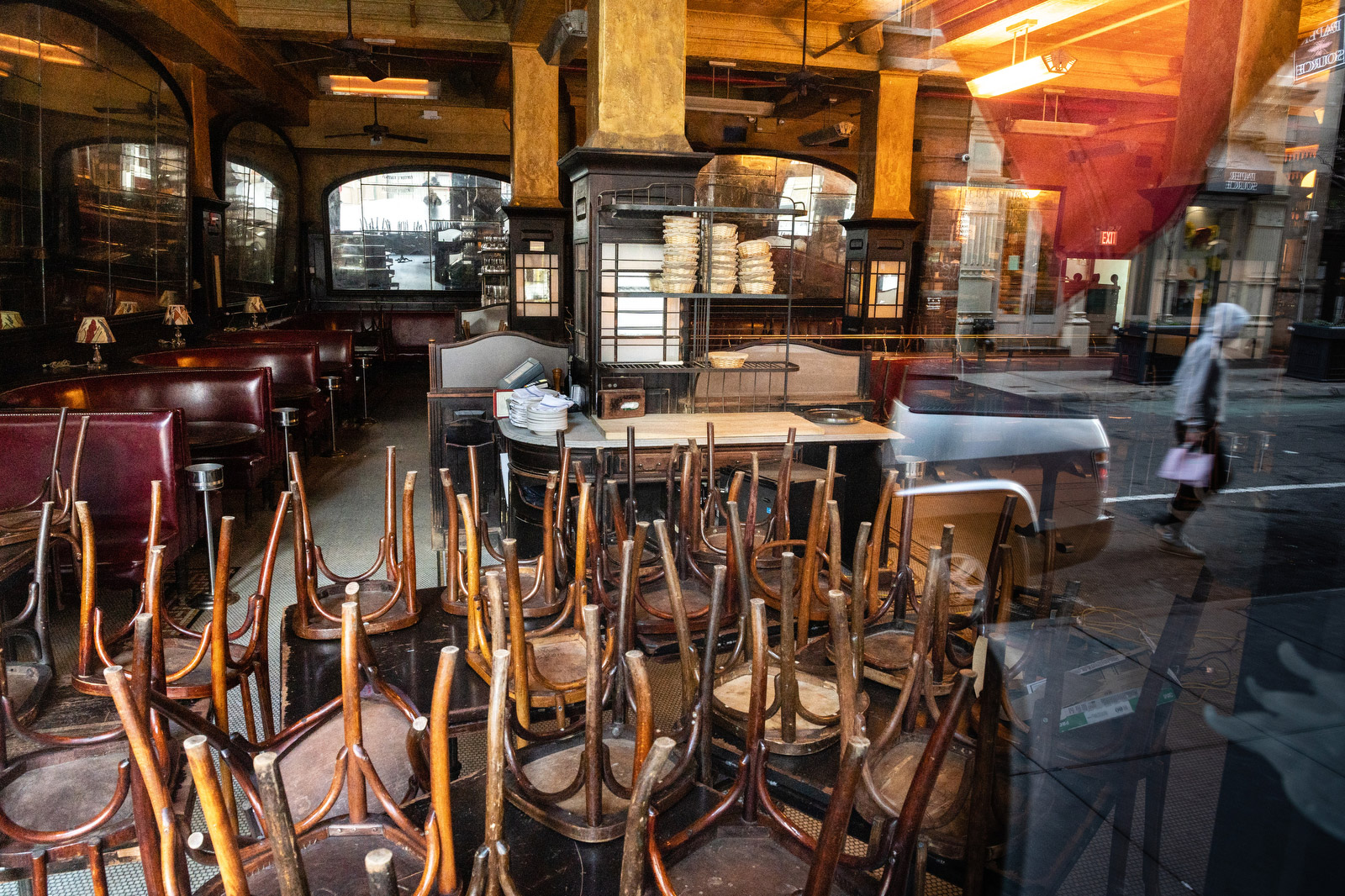 Bars and nightclubs were ordered to close in March, and restaurants were limited to takeout during the shutdown. 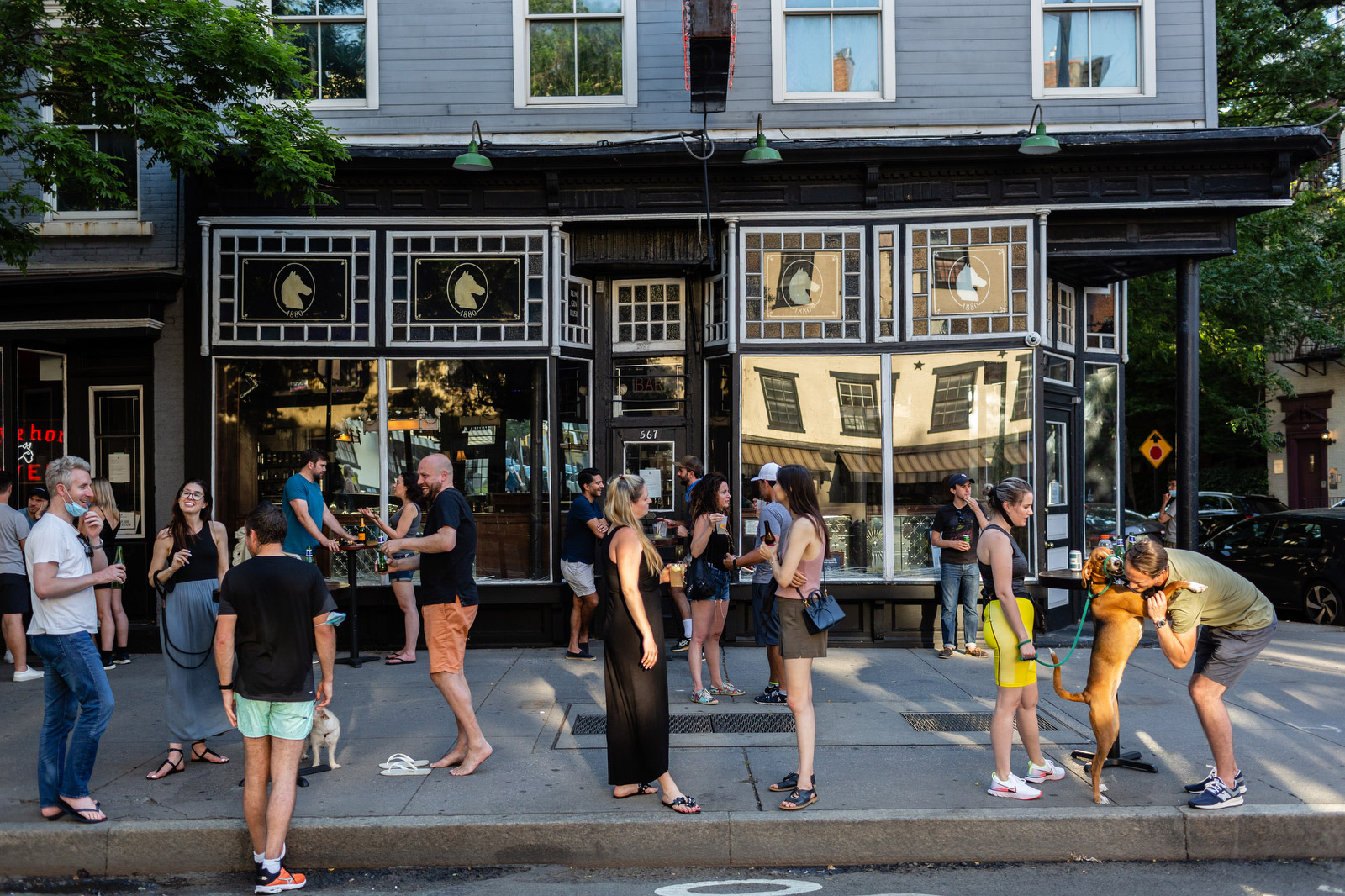 Customers stand outside the White Horse Tavern on Tuesday. 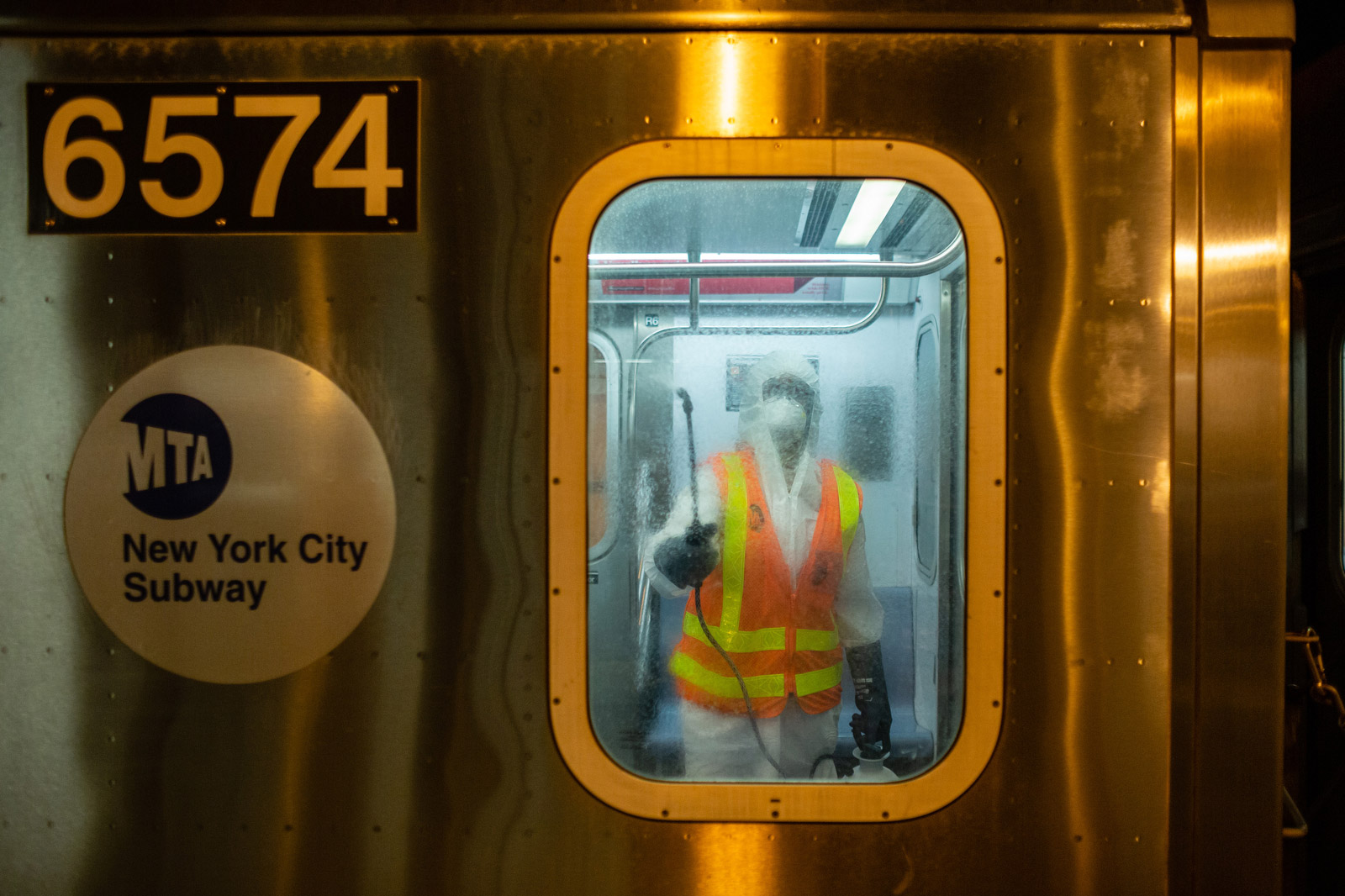 Since May 6, New York’s subways have been closing from 1 a.m. to 5 a.m. to give workers time to thoroughly disinfect trains, stations and equipment. 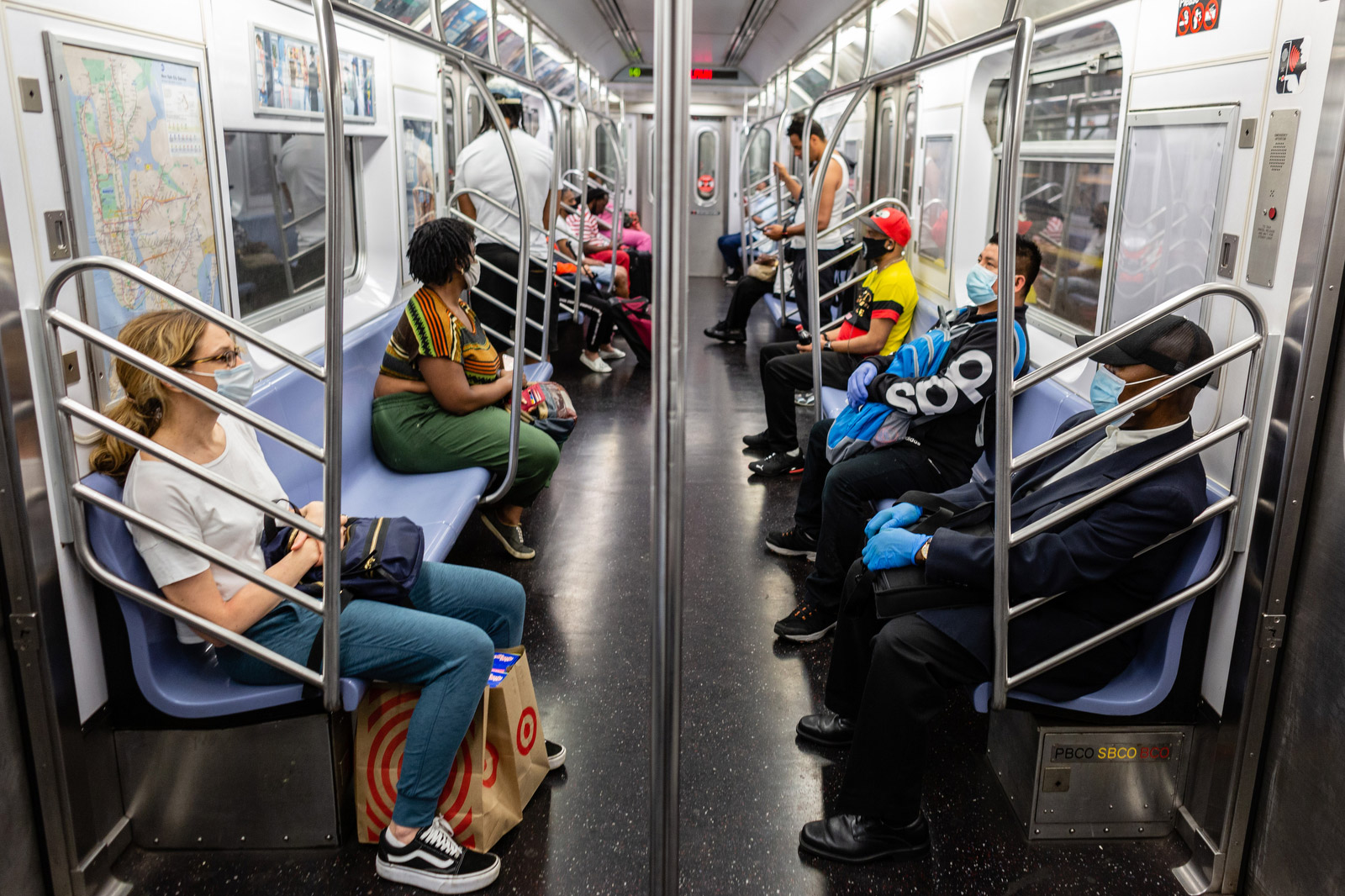 People ride the subway on Monday, the first day of the city’s Phase One reopening.

“New York is beginning to look like it used to be, certainly from the outside,” Fadek said. “You have people going about their business, but they're just wearing masks.”

He said most New Yorkers he’s encountered have been taking the threat seriously.

“Everyone is wearing their masks, and the social distancing is also being observed, especially in supermarkets and waiting outside to pick up online orders in front of retail stores,” he said.

There have been some exceptions lately, though. 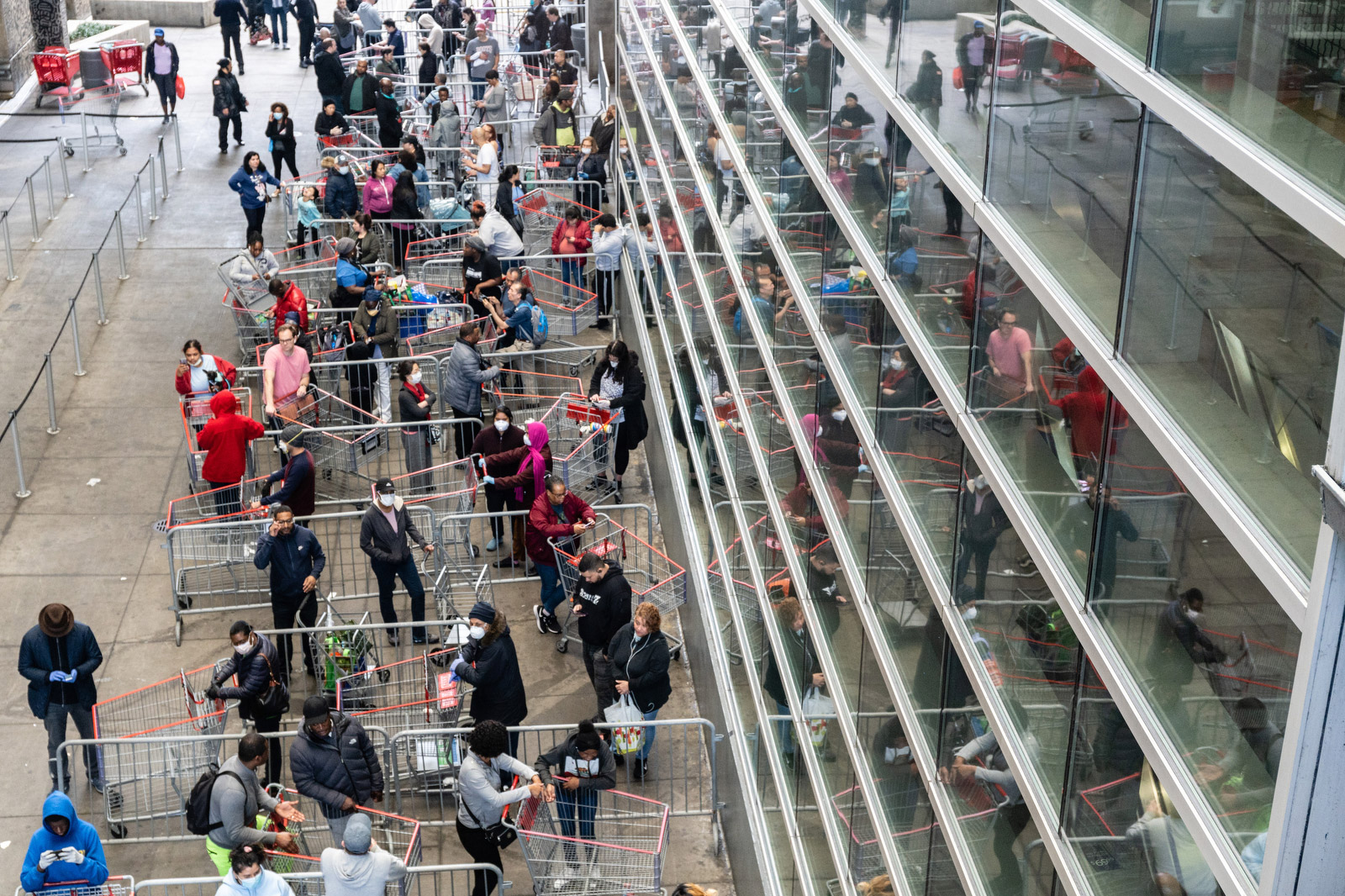 Shoppers line up to enter a Costco supermarket in March. 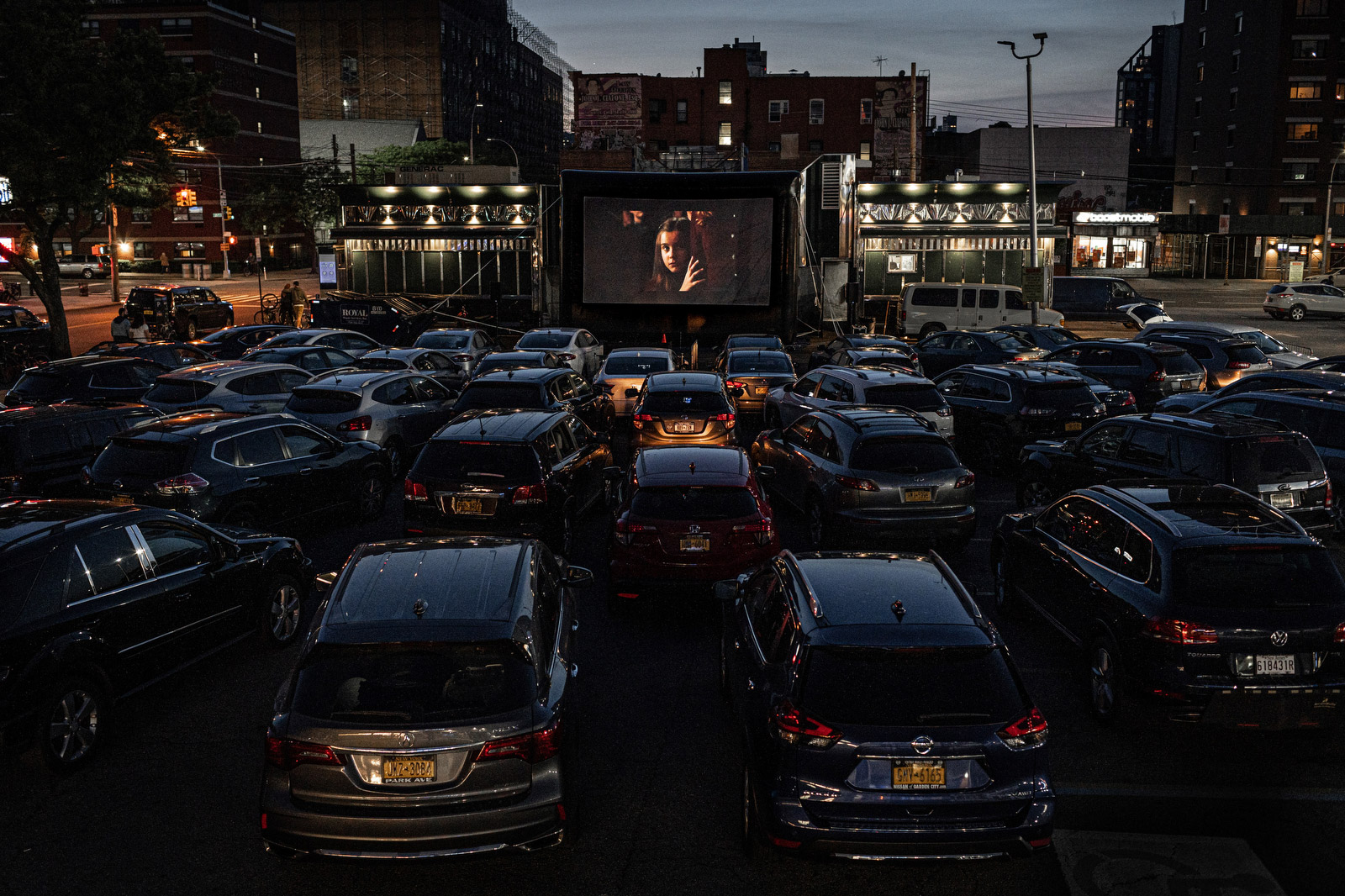 People in their vehicles watch “The Greatest Showman,” which was screened in May at the drive-in movie theater behind the Bel Aire Diner in Queens. 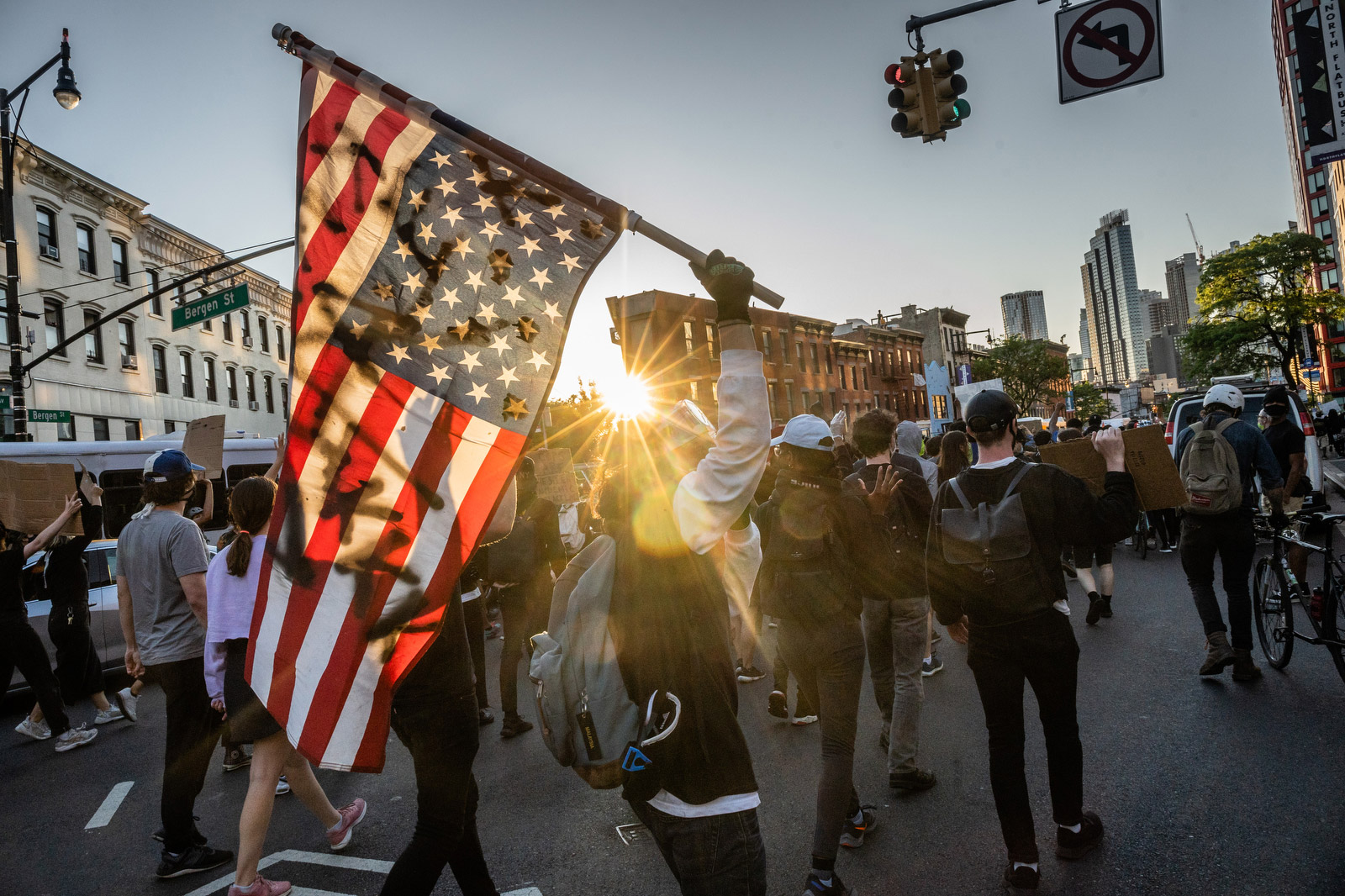 A protester carries an American flag upside down during a march in Brooklyn in late May.

He’s noticed some younger people are choosing to not wear masks. And during the recent protests following George Floyd’s death, Fadek saw masks, but social distancing was nonexistent.

“During the eight or 10 days or so of the protest, there was a ‘Pandemic? What pandemic?’ kind of feeling,” Fadek said. “But now that the protests have ebbed, everyone's thinking about coronavirus once again.”

The bottom line is that New Yorkers, like most Americans, are eager to get on with their normal lives. 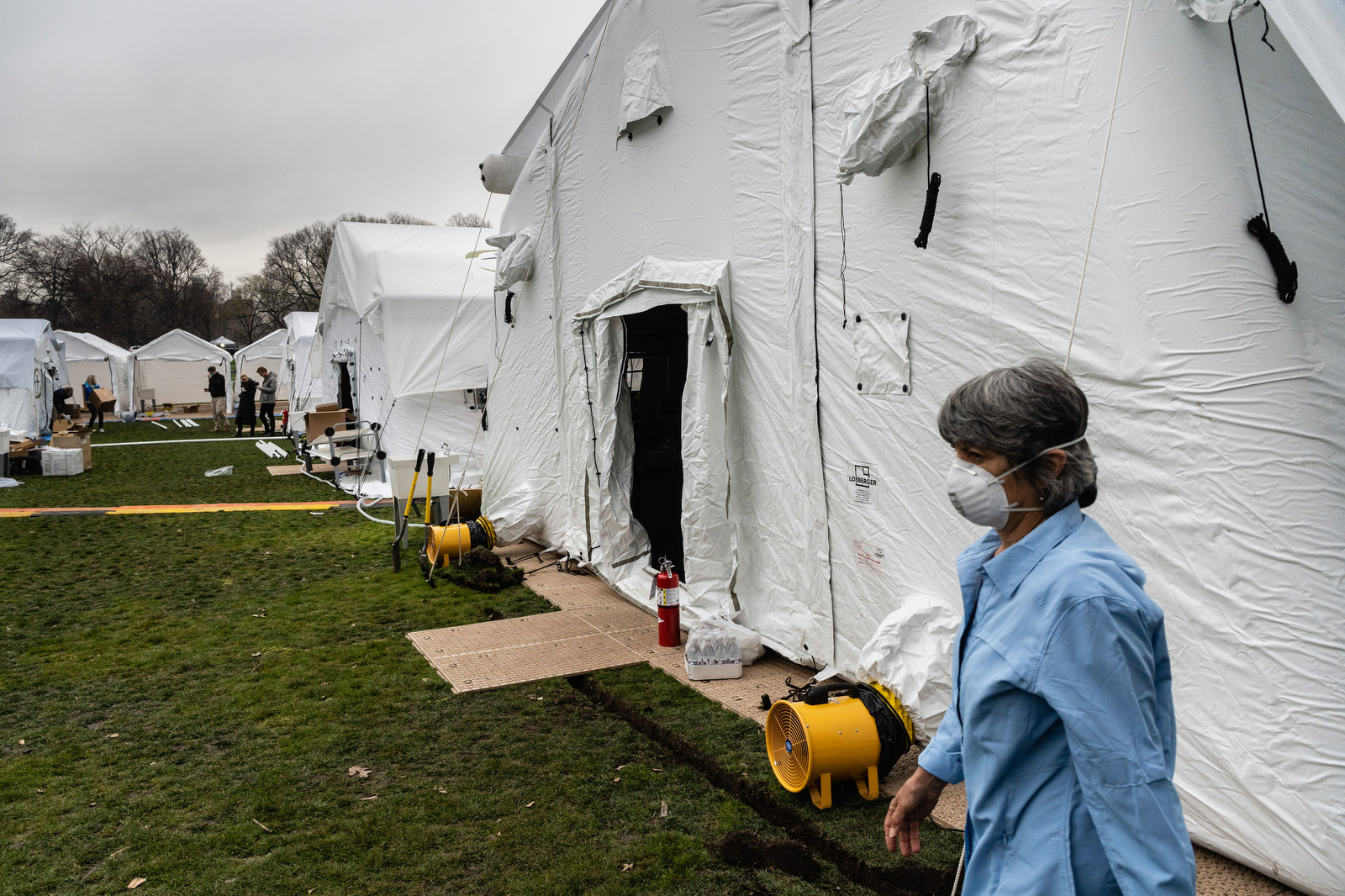 Samaritan's Purse set up a 68-bed field hospital in Central Park to handle an overflow of coronavirus patients in March. 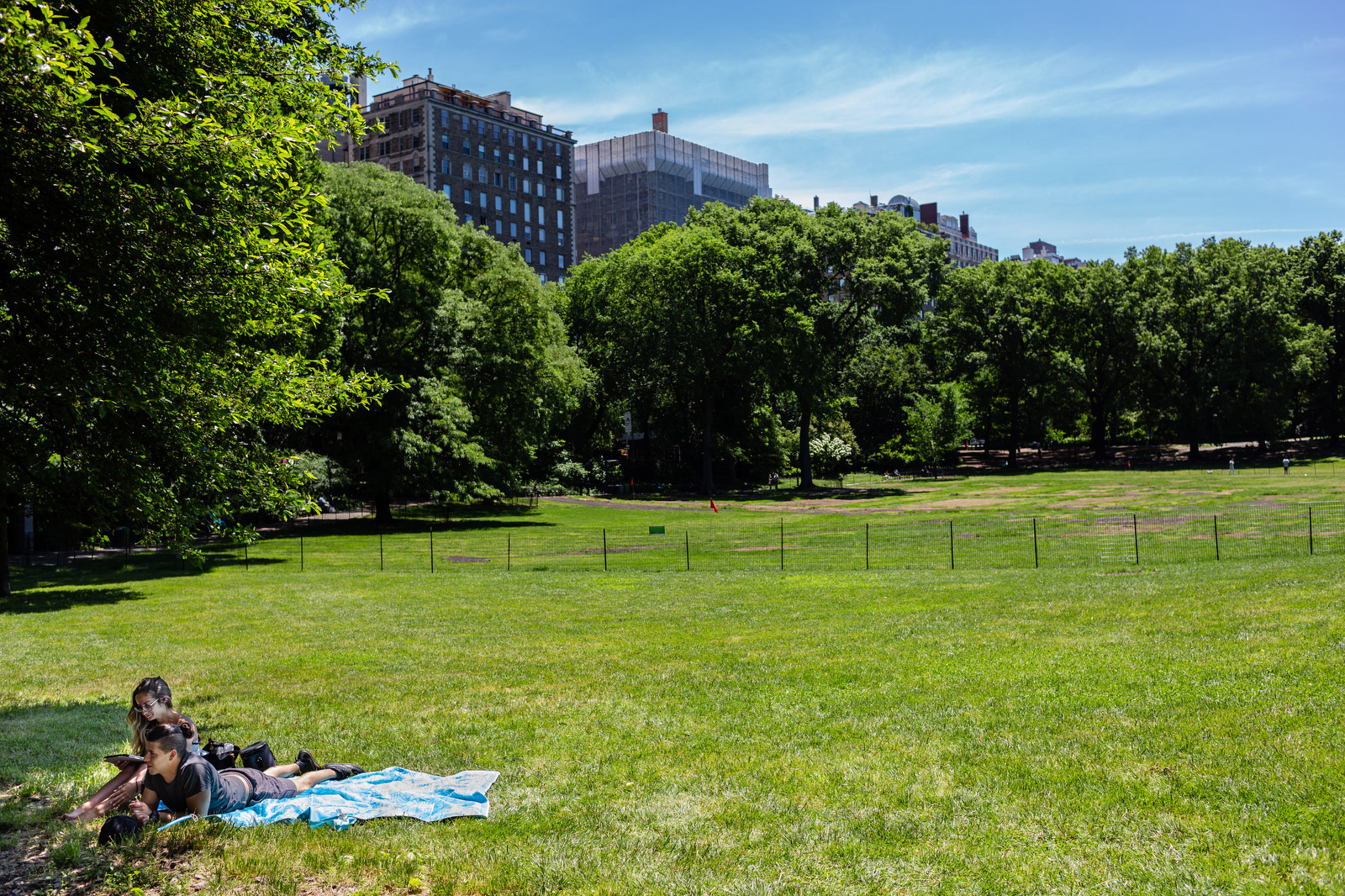 Amanda and Gus traveled from Staten Island to have a picnic in Central Park on Monday. The area behind this fence is where the field hospital used to be located. 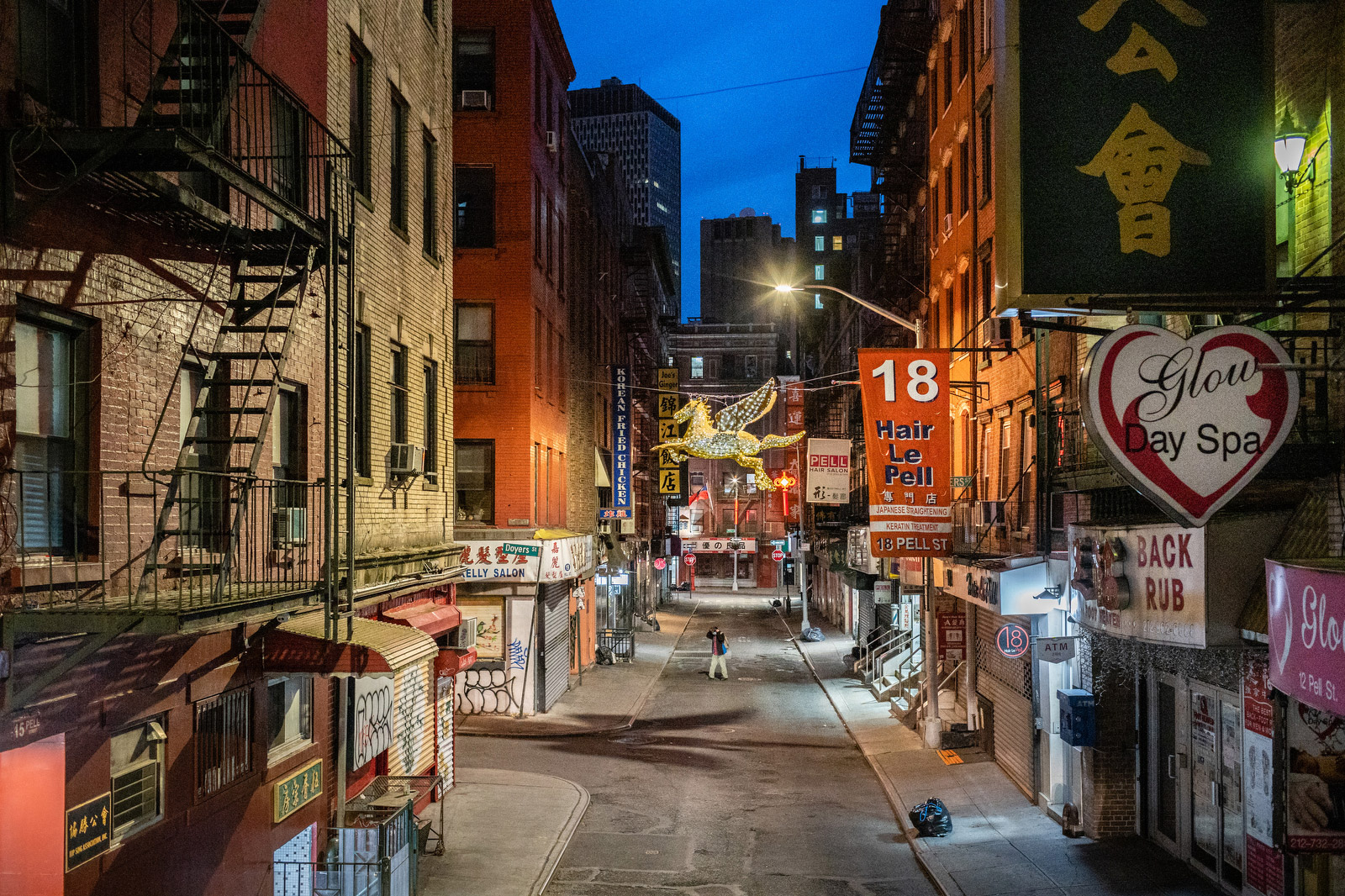 Pell Street in Chinatown was mostly empty in May. City officials and some Chinese business owners said many people feared visiting Chinatown because the coronavirus started in China. 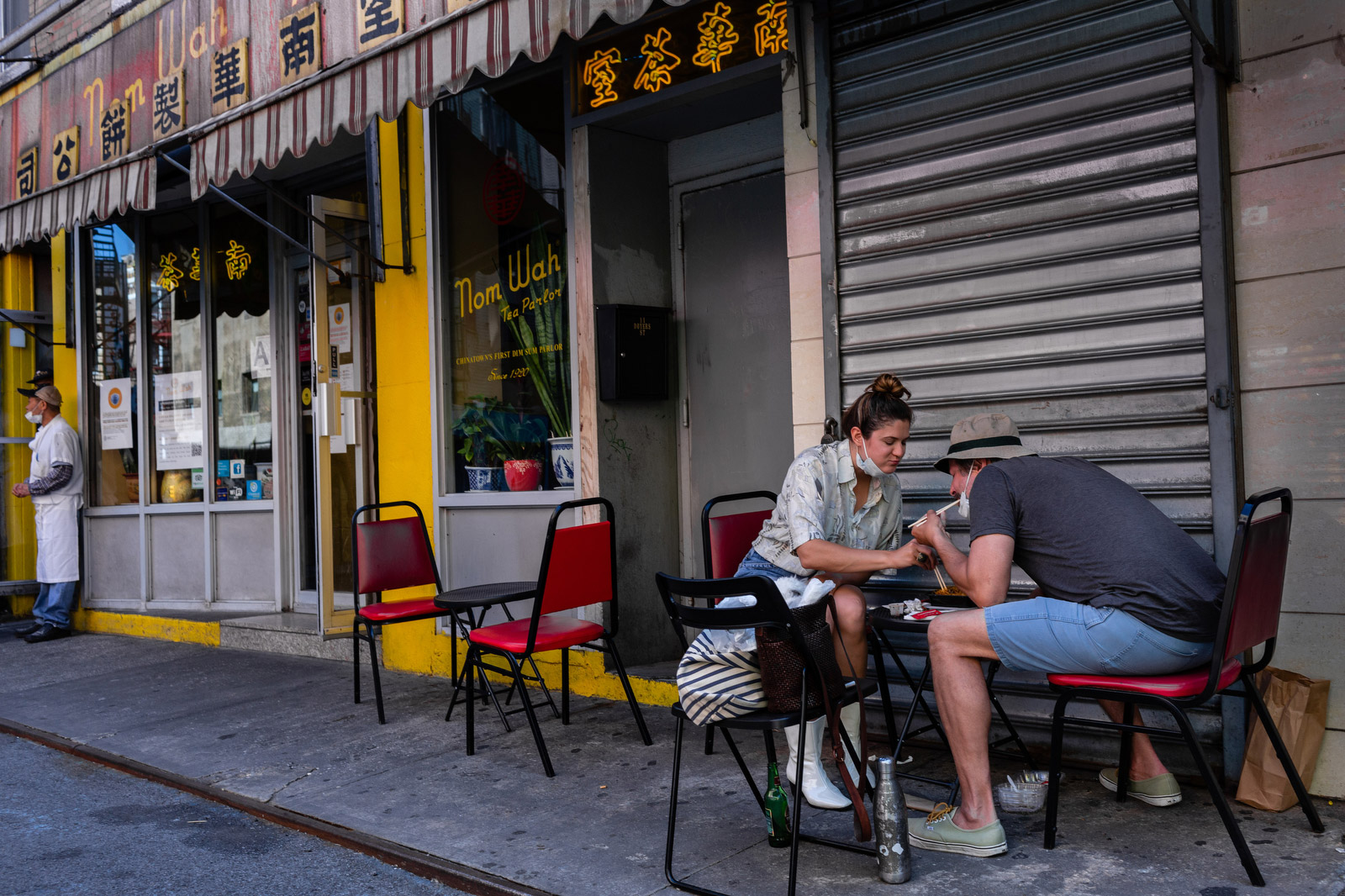 Stephanie Cole and Ken Finn share a plate of noodles outside the Nom Wah Tea Parlor in Chinatown on Monday. They walked over the Williamsburg Bridge to support businesses they frequented before the pandemic.

Many people also need to go back to work, and they are faced with a difficult decision about when to do that.

Fadek had no assignments during the city’s lockdown phase, but he went out and shot photos anyway. 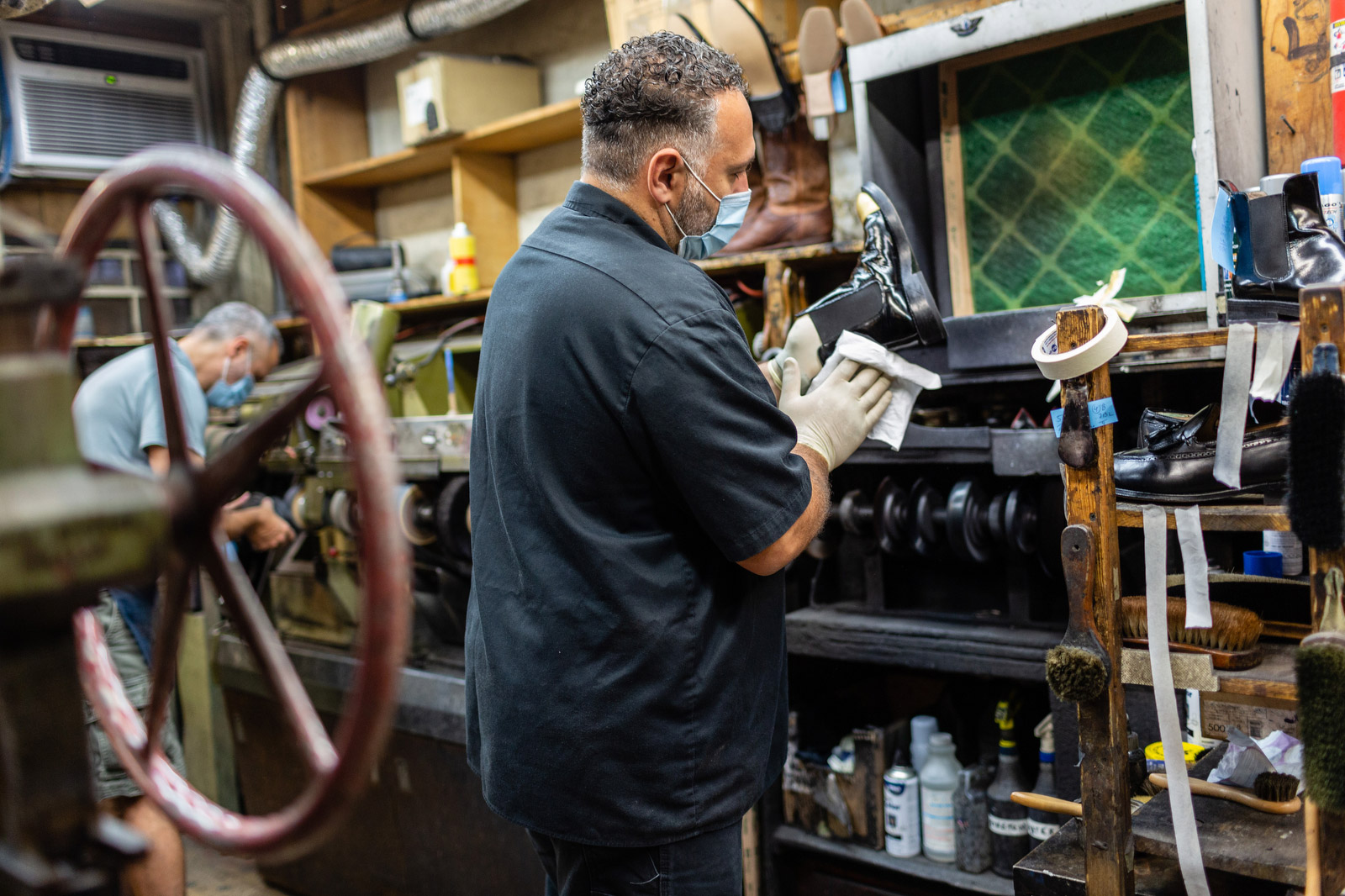 Michael Papoutsakis, owner of Pavlos Shoe Repair in Manhattan, works on a pair of shoes. “We opened in 1973, but with the virus and the shutdown, now it’s like starting a new business. We’re starting from zero,” he said. “We don’t know if it’s going to work or not.” 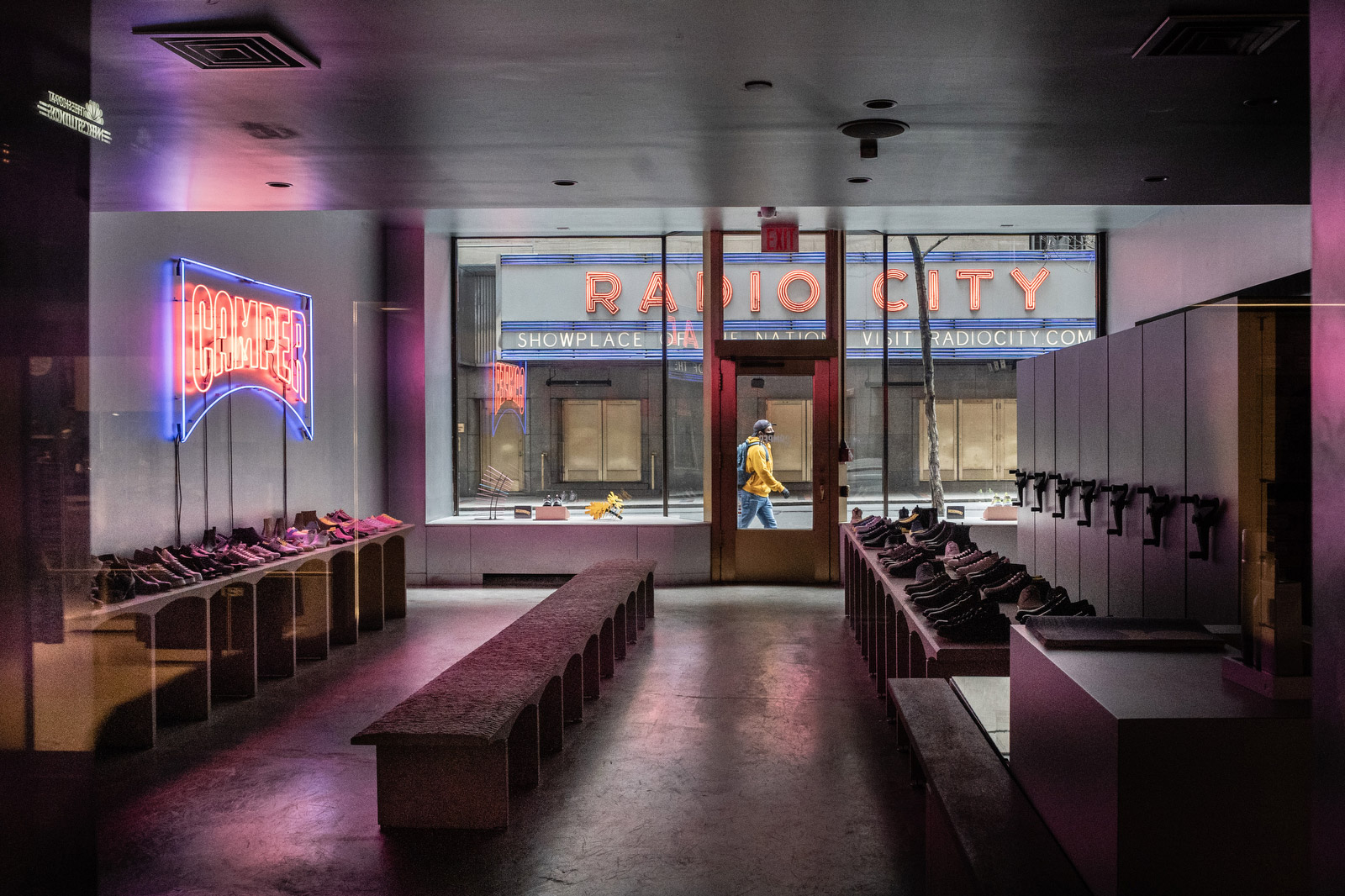 A man walks past a closed shoe store in Rockefeller Center in March. 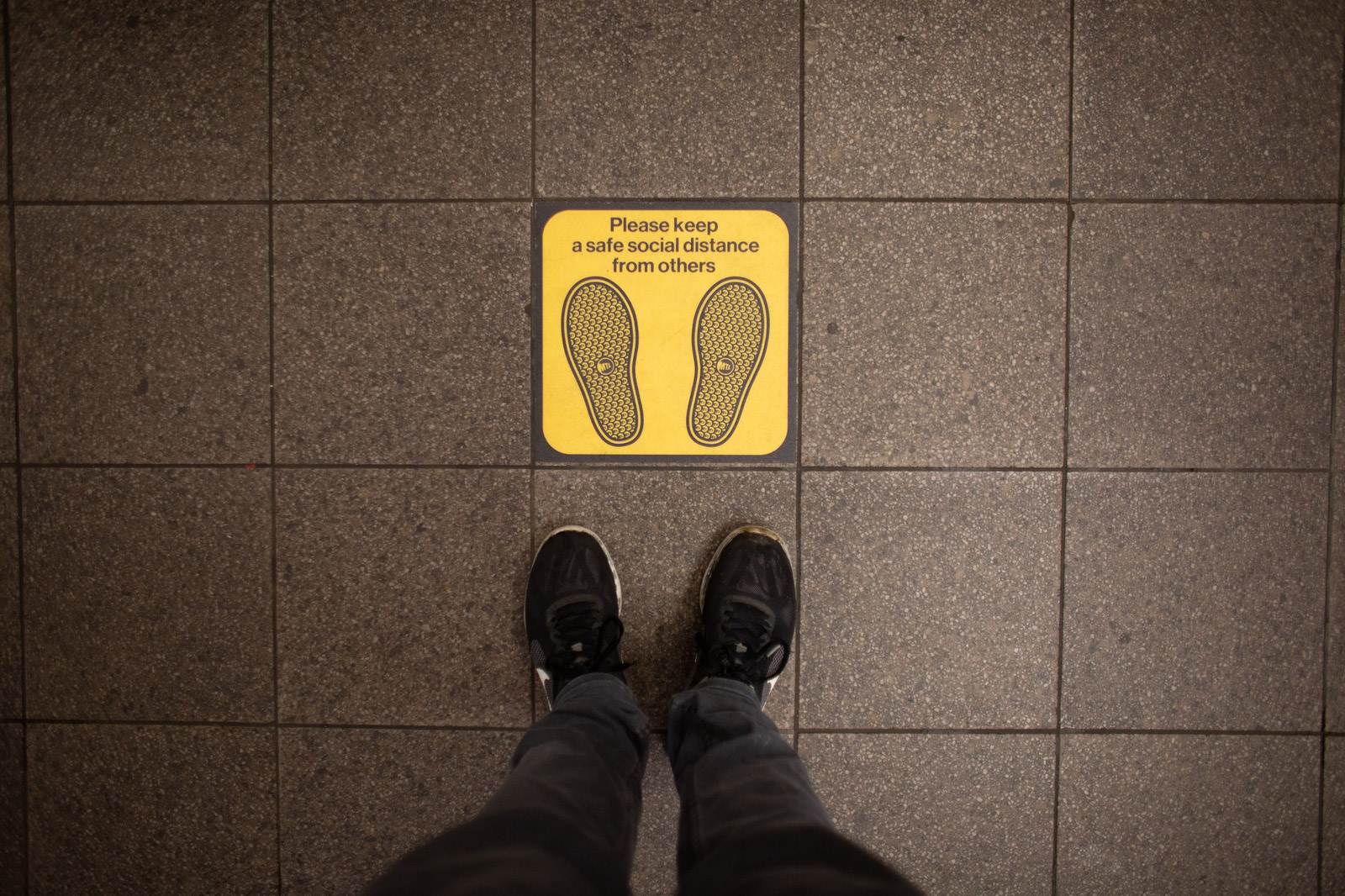 Social-distancing labels have been placed on subway platforms around New York.

Fadek always wears a mask when he goes out, and he carries a small bottle of hand sanitizer with him. At the peak of the virus, he would strip off his clothes and put them into a plastic bag when he got home.

As a journalist, he considered it his duty to get outside and show what was happening.

“It's the first draft of history, something as major as this tragic world event, and I can cover it from my little corner of the world from New York City,” he said. “That's my role, and I felt compelled to do it despite the dangers.” 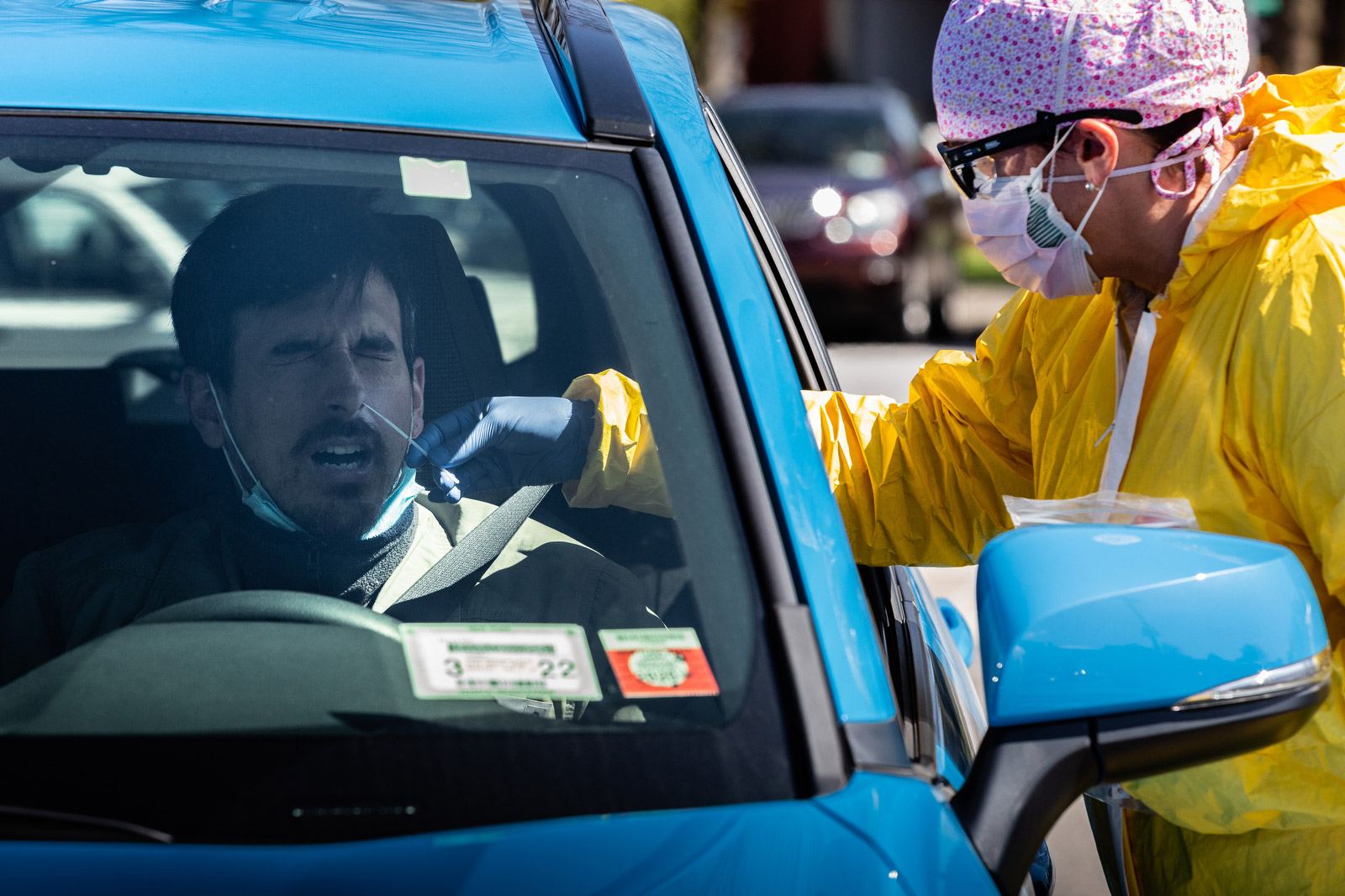 A coronavirus test is administered in April at a drive-thru testing site in Queens. 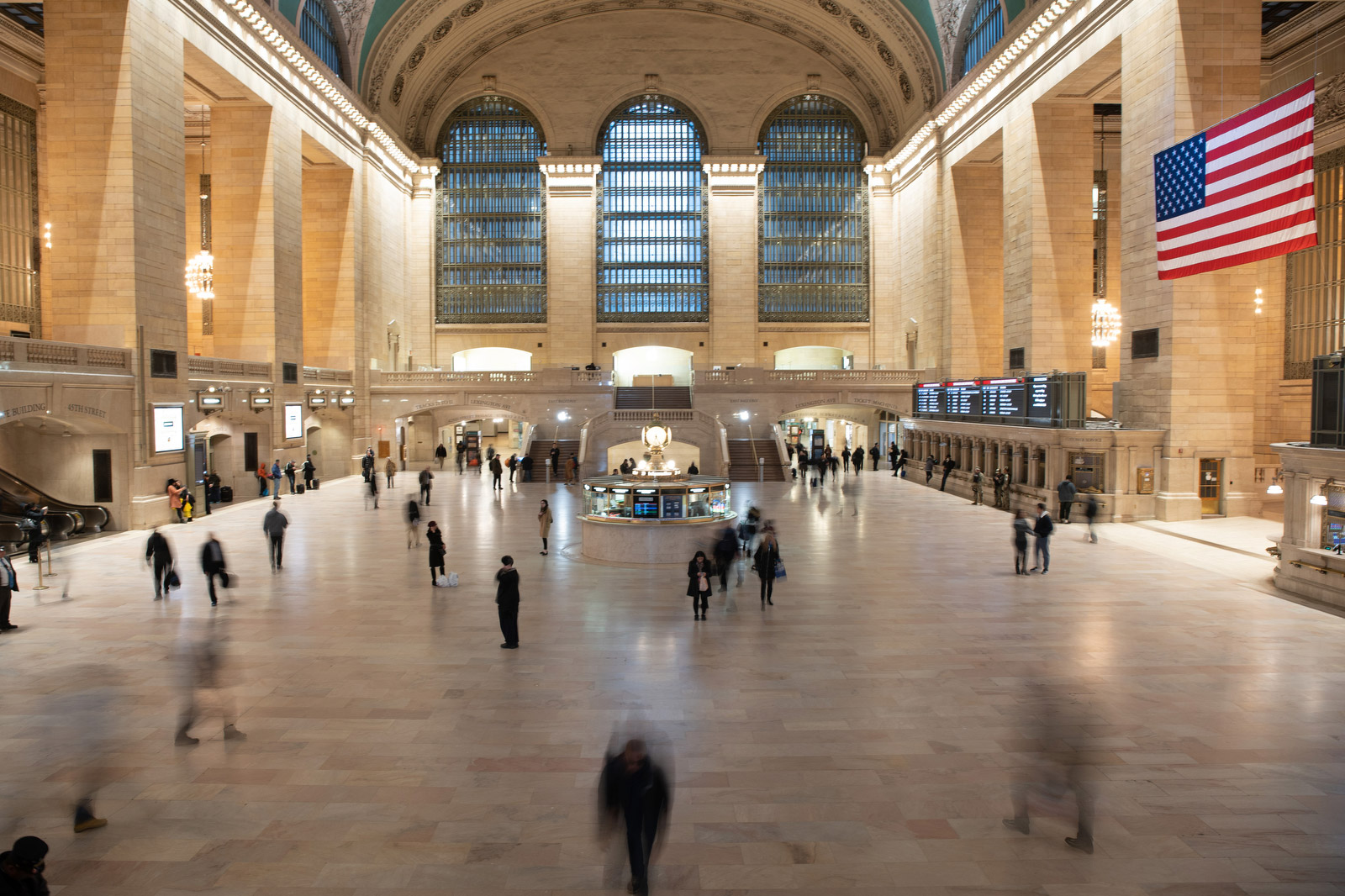 People walk through Grand Central Terminal in March, near the start of the lockdown. 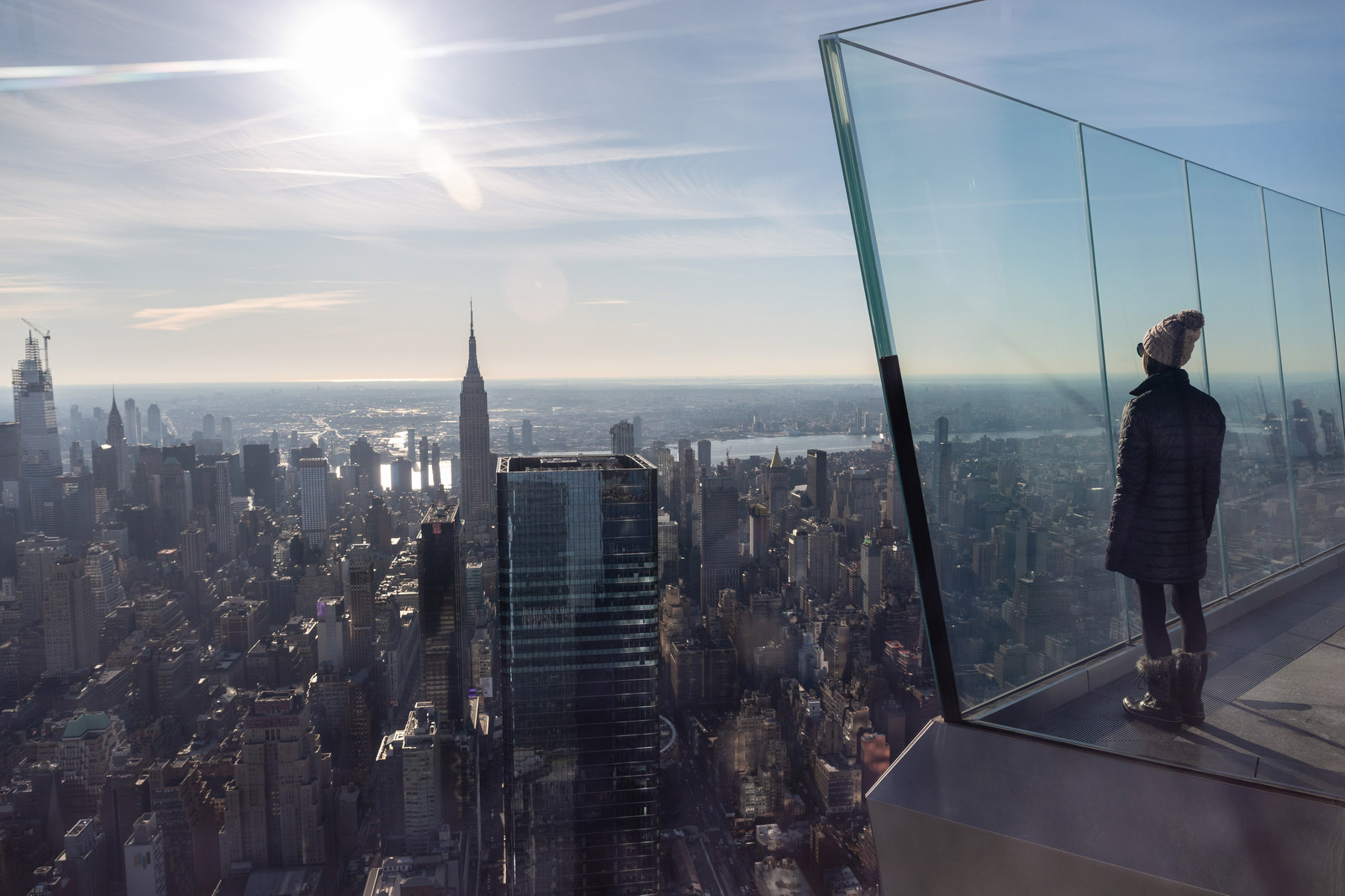 A visitor looks at the skyline from the 100th-floor observation deck of Hudson Yards in March. Days later, the deck would close to visitors.

Phase Two of New York’s reopening plan would allow even more businesses to reopen, and the city would see in-store shopping, outdoor dining, and limited service at barbershops and hair salons.

The earliest that could happen is June 22, but officials are being cautious and will keep a close eye on the statistics before taking the next step.

“I still believe the best estimate is the beginning of July,” Mayor De Blasio told radio station 1010 WINS on Thursday. “But look, if the health care situation continues to prove positive, obviously I want to go as soon as we can go safely.”