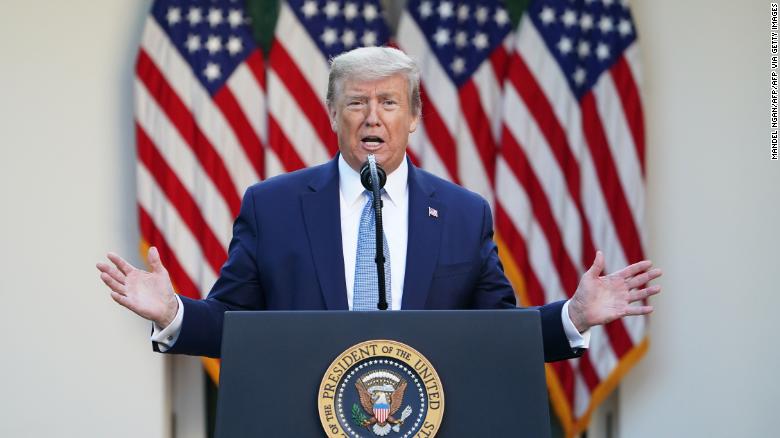 Washington (CNN) – As millions of Americans begin their second month under lockdown, President Donald Trump is rewriting the history of his coronavirus response. In doing so, he is giving the public an inaccurate and cherry-picked retelling of what he did in the pivotal early months.

As part of this effort, during Monday’s daily coronavirus briefing, the White House played a propaganda video describing Trump’s “decisive actions” to deal with the pandemic. After facing questions about why the video omitted nearly the entire month of February, the White House followed up on Tuesday with a series of talking points about his “strong action” during that month.

February was a crucial time. The focus was on China, but public health authorities were warning the pandemic would reach the US with vigor. The US government started taking action, but Trump was out of step with the science and downplayed the threat. Had he acknowledged the severity earlier and acted accordingly, experts say, some of the worst could have been avoided.

Ignoring Trump’s denialism, the White House tries to portray him as a strong leader who saved lives. But its timeline is mostly full of press releases about plans and a list of conversations among politicians – heavy on talk, with little immediate action. This narrative excludes critical context and glosses over some key failures from the administration’s fumbling response.

CNN’s fact-check team examined the full context of what happened in February to fill in many of the missing details. Here’s the bigger picture.

The White House said the Centers for Disease Control and Prevention expanded airport screenings, but the hyperlink says it was rolled out by the Department of Homeland Security.

That’s a minor error. The bigger issue is that these screenings, of travelers arriving from China, didn’t immediately lead to large quarantines. Reuters reported that five days after this announcement, “only a handful of commercial airline passengers” had been quarantined.

In announcing the change, acting DHS Secretary Chad Wolf said, “The overall risk to the American public remains low.” (When he said that, there were only about 11 confirmed cases in the US. Within six weeks, there were nearly 3,500 nationwide.)

As these changes were made, Trump spent the weekend at his Mar-a-Lago resort in Florida.

February 4: FDA issued an emergency use authorization for the CDC diagnostic to test for coronavirus.

The Food and Drug Administration relaxed the limits on who could conduct tests for Covid-19, permitting tests not only at official CDC labs but also at public health labs that are “CDC-qualified.” This paved the way for more testing, but testing shortfalls remained, so the rules were further relaxed as things got worse later in the month, to allow private labs to do their own testing.

Additionally, there were problems with some of the test kits that the CDC gave to labs across the country, which led to even longer delays. States complained about inconclusive results from the faulty tests, which meant local officials were in the dark about the size of their outbreaks.

February 4: During the State of the Union, President Trump stated that his “[a]dministration will take all necessary steps to safeguard our citizens” from the coronavirus.

It’s true that Trump mentioned the coronavirus during his State of the Union address, but only in passing, taking 20 seconds out of his 78-minute speech. By contrast, he spent more than three minutes praising right-wing radio host Rush Limbaugh and presenting him with the Presidential Medal of Freedom.

In the speech, Trump said he was working with Beijing “on the coronavirus outbreak in China.” Trump did not mention that US intelligence agencies had already sent a flurry of warnings to the White House about the growing dangers of a pandemic, including at least one warning that was included in his daily intelligence briefing, according to The Washington Post and ABC News.

Health and Human Services Secretary Alex Azar and then-acting White House chief of staff Mick Mulvaney briefed lawmakers on Capitol Hill. Mulvaney later said only “five senators” and about a dozen House members showed up, and he blamed impeachment for the low attendance.

Some Democrats walked away from the briefing underwhelmed. Connecticut Sen. Chris Murphy tweeted at the time, “they aren’t taking this seriously enough,” and pointed out that the Trump administration didn’t ask for emergency funding or address supply-chain issues for hospitals.

Yes, Trump and Xi spoke that day, but Trump followed up his conversation by heaping praise on the authoritarian leader and his Communist government. Trump said Xi was “strong, sharp and powerfully focused,” and echoed unproven theories that the virus would die off in the spring.

He also said China was “professionally run” and “they have everything under control,” consistent with his past comments that Beijing was being cooperative and transparent with the world.

But as the pandemic worsened in the spring, and after the US overtook China as the country with the most reported cases, Trump changed his tune and started attacking Beijing. He accused China of fabricating its statistics and suppressing lifesaving medical information.

February 9: The Coronavirus Task Force briefed governors from across the country at the National Governors’ Association Meeting.

This briefing created some confusion for the two dozen governors who attended.

The Washington Post reported that “many of the governors” were rattled afterward, because the information they received didn’t resemble Trump’s public comments about the virus, which were rosy and optimistic. One day later, at a political rally in New Hampshire, Trump said, “By April, you know, in theory, when it gets a little warmer, (the coronavirus) miraculously goes away.”

This announcement was an early step in a long process. Trump has inaccurately said that a vaccine could be available by the summer. Dr. Anthony Fauci, the nation’s top infectious disease expert, has said it will likely be more than a year until it’s ready for the public. Some experts say even that pace is optimistic, because vaccine studies typically take much longer.

February 14: CDC announced their ongoing work with five laboratories to perform community-based influenza surveillance and study the spread of coronavirus.

Trump was at Mar-a-Lago when the CDC made this announcement about expanded testing.

That same day, HHS and the White House National Security Council produced a memo warning that stay-at-home orders and widespread closures could become part of the nationwide effort to stop Covid-19 from spreading, according to The New York Times.

These warnings turned into a reality just weeks later, when much of the country was shut down to enforce social distancing. Undercutting that effort, Trump has repeatedly pined about reopening the country, ignoring data from the CDC and states that suggest the virus is continuing to spread.

February 18: HHS announced it has engaged Sanofi Pasteur in order to develop a coronavirus vaccine and treatments for coronavirus infections.

This was another initial step toward a Covid-19 vaccine. Public health officials have said this process will take at least a year, though Fauci has also said, “This is the fastest we have ever gone from a sequence of a virus to a trial.” The White House talking points never mentioned this year-plus timeline for a potential vaccine.

Meanwhile, the President was still traveling and campaigning as planned, with three rallies in the three days following the HHS announcement. It’s also interesting that the White House chose to highlight this arrangement with Sanofi Pasteur, because multiple news outlets have reported that Trump has a small financial interest in the French pharmaceutical giant Sanofi.

February 24: The Administration requested at least $2.5 billion from Congress to help combat the spread of the coronavirus.

Lawmakers from both parties expressed concerns that the Trump administration’s request was too low. Senate Minority Leader Chuck Schumer, a New York Democrat, proposed $8.5 billion in emergency funding to fight the coronavirus. After 10 days of heated negotiations, the White House agreed to $8.3 billion, in a deal brokered with congressional leaders from both parties.

This funding was microscopic compared with the $2 trillion stimulus package passed by Congress a few weeks later.

Although the Trump administration has consistently tried to cut funding for agencies now integral to responding to the coronavirus, Azar attempted to defend next year’s budget as having adequate funds for these response efforts.

According to the link provided by the White House, Azar’s testimony that day was before the Senate Appropriations Committee, not the Health, Education, Labor and Pensions Committee. Azar’s testimony was focused on Trump’s budget request for the next fiscal year, not the coronavirus, though he briefly mentioned the outbreak in his opening statement.

Azar told the committee that the 2021 budget proposal “reflects how seriously we take the threat of other infectious diseases, such as the China coronavirus,” because it prioritized funding for infectious disease programs and hospital preparedness – funds that had been slashed in past Trump budgets.

This announcement, while initially praised as evidence the President was prioritizing the US coronavirus response after an official visit to India, created more confusion at first. In particular, it raised questions about who was actually in charge, Pence or Azar, whose standing with Trump was already in question at the time. However, Pence was also criticized for not giving the crisis his full attention after he attended a fundraiser only two days into his new role.

Right before putting Pence in charge, Trump had downplayed the severity of the situation, claiming the number of US coronavirus cases “within a couple of days is going to be down to close to zero,” from 15. One week later, the US had 158 confirmed cases of the virus. The number has steadily increased, soaring past 1,000 within two weeks, and is now more than 700,000.

February 29: FDA began to allow laboratories to develop and utilize coronavirus testing kits during the application and review process.

This was a helpful move, but possibly too little too late. The announcement came after states had struggled with the CDC tests for weeks, prompting more than 100 virologists and other specialists to write a letter to Congress protesting the FDA’s regulatory process. The letter said the existing guidelines were preventing labs from running validated coronavirus tests and putting “undue pressure on the CDC,” which was scrambling to remanufacture its tests after the initial ones distributed in early February were found to be faulty.

Jeremy Konyndyk, an expert on global pandemic preparedness now with the Center for Global Development, told CNN the Trump administration’s initial reliance on the CDC’s test caused a delay in the country’s ability to test for the virus and allowed it to spread relatively unchecked.

February 29: The Administration issued travel warnings for parts of South Korea and Italy.

Pence announced the US was raising the travel warning to level 4, its highest, and cautioning Americans against traveling to South Korea and Italy. But the policy has not stopped travelers from entering the US from either country. That day, South Korea had exceeded 3,000 coronavirus cases and Italy surpassed 1,000 cases. The new travel warning came as public health officials in Washington state announced the first coronavirus death inside the United States.

February 29: President Trump issued a proclamation expanding entry restrictions on individuals who had visited Iran in the last 14 days.

Coming almost a month after Trump blocked foreigners who visited China from entering the US, this proclamation was the second travel restriction the President issued as part of his efforts to stop the spread of coronavirus. The day these restrictions were announced, Iran confirmed its 593rd case of coronavirus, putting it fourth globally in terms of cases, behind China, South Korea and Italy. However, even though South Korea and Italy had more coronavirus cases than Iran, they remained exempt from similar travel restrictions until later.