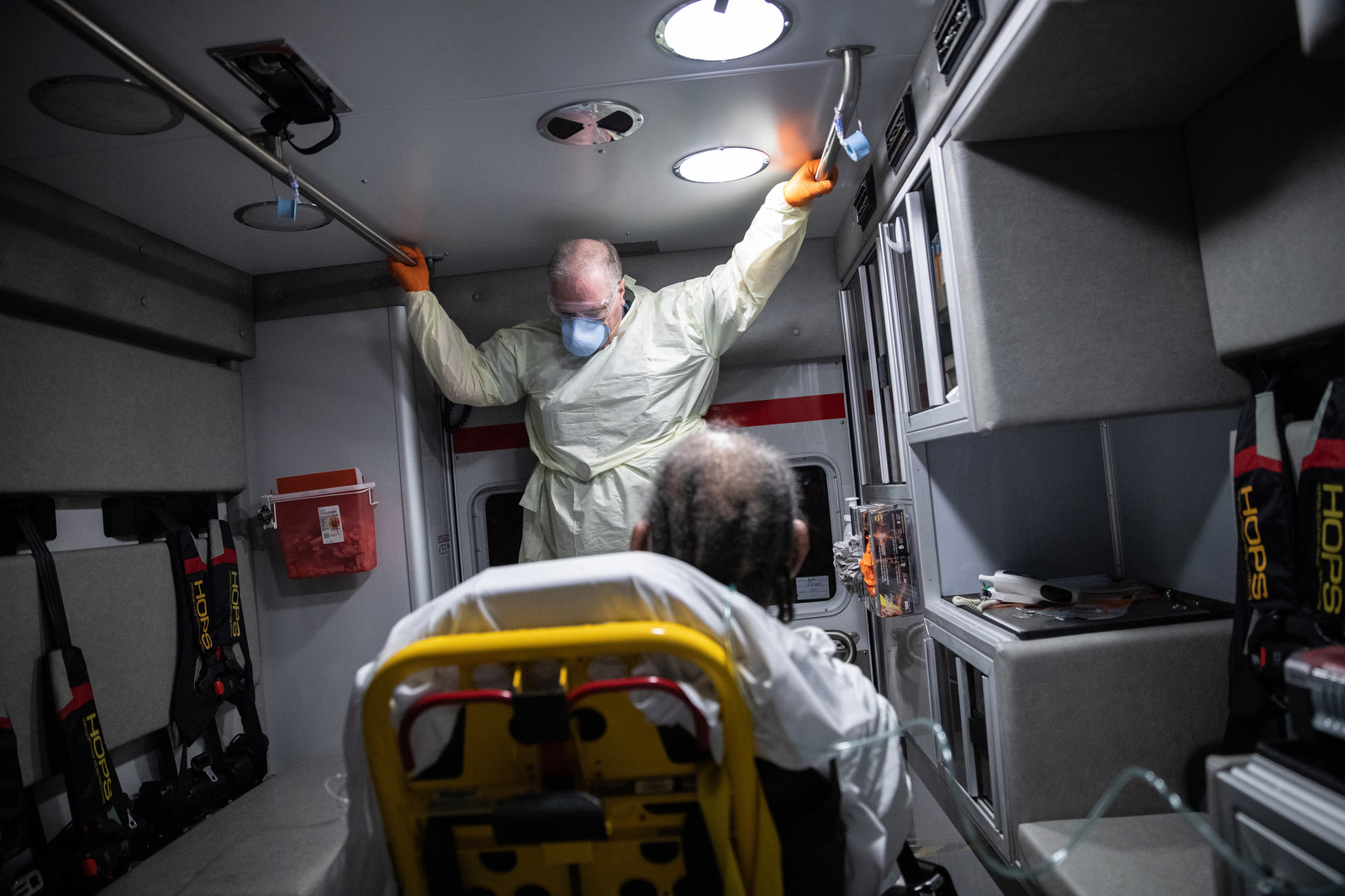 Paramedic Randy Lilly rides in an ambulance with a patient in Stamford, Connecticut, on April 4.

How first responders are tackling this unprecedented threat

Paramedic Randy Lilly rides in an ambulance with a patient in Stamford, Connecticut, on April 4.

They’ve been the tip of the spear in the fight against the coronavirus.

Paramedics and emergency medical technicians have been working long, pressure-packed hours to respond to calls and get people the help they need.

“After 9/11, firefighters were America’s heroes as first responders. This time, it’s EMS and hospital workers,” said John Moore, a Getty Images photographer. “I think it’s important to give credit where it’s due and, for me as a photojournalist, to show the importance of their work.” 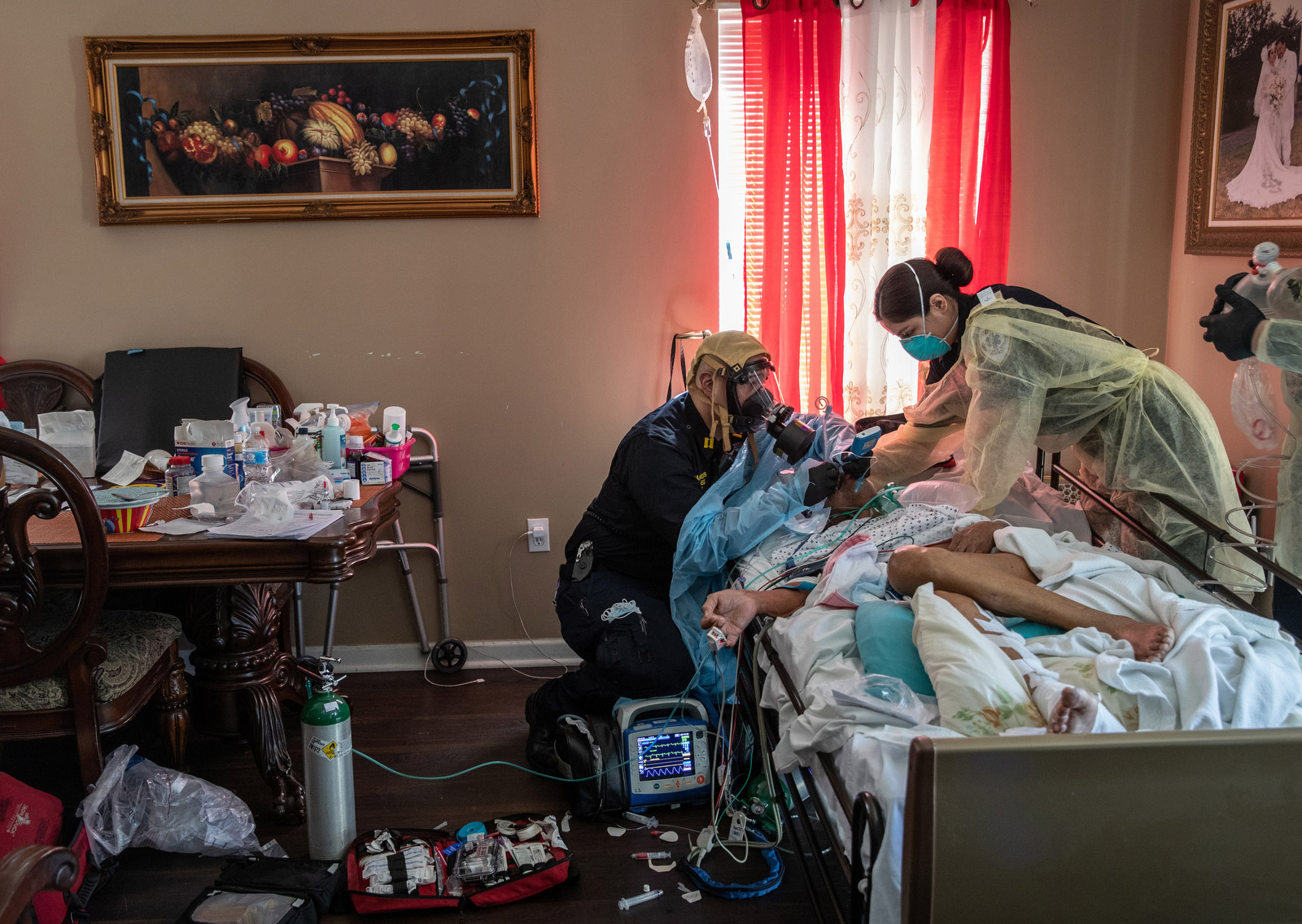 Emergency medical workers intubate a patient at a home in Yonkers, New York, on April 6. The 92-year-old man was later put on a ventilator at the hospital, and he died two weeks later, his family said. 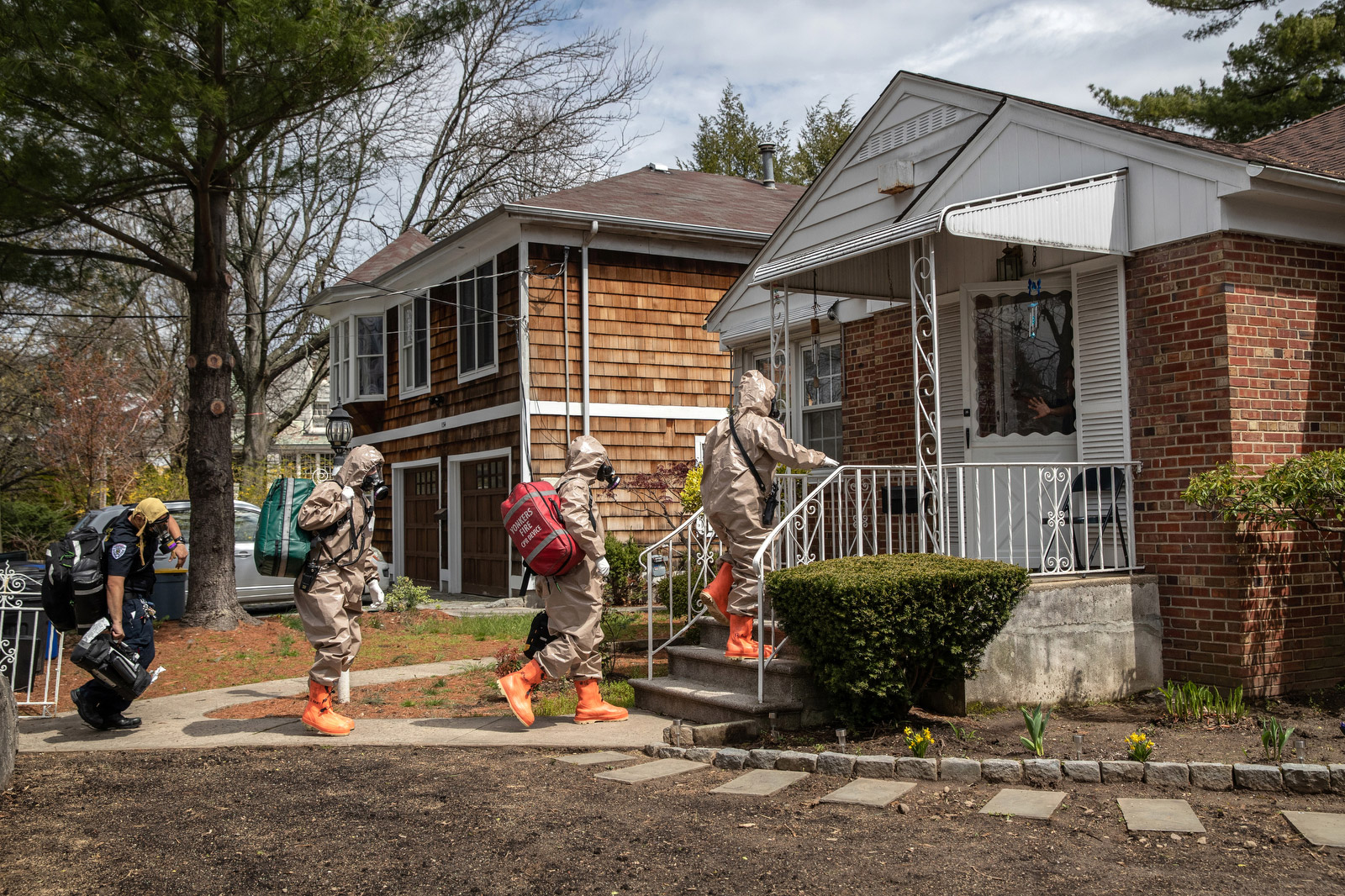 Emergency workers respond to a call in Yonkers on April 14.

Earlier this month, Moore was embedded with emergency medical workers in Stamford, Connecticut — where he resides — and Westchester County, New York. Both have been hit hard by the coronavirus.

“New York City, of course, is the epicenter, but the suburbs are heavily affected and receive far less media attention because of the heavy media presence in New York,” Moore said. “So that's what I've been concentrating on.”

He tagged along with EMTs as they made house calls, provided care and transported patients to the hospital. 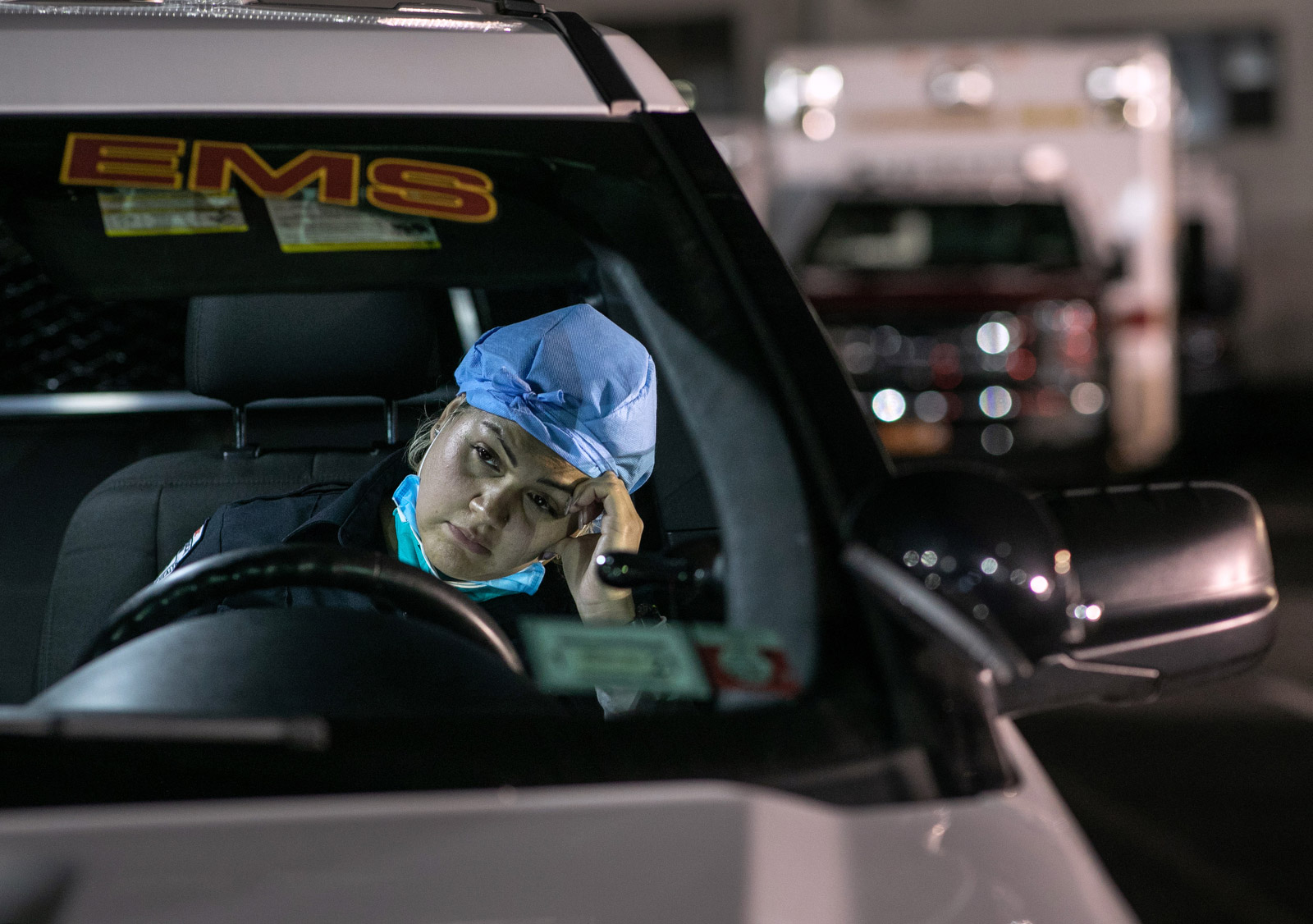 Paramedic Patricia Rodriguez fills out reports on a laptop after her 12-hour shift on April 6. 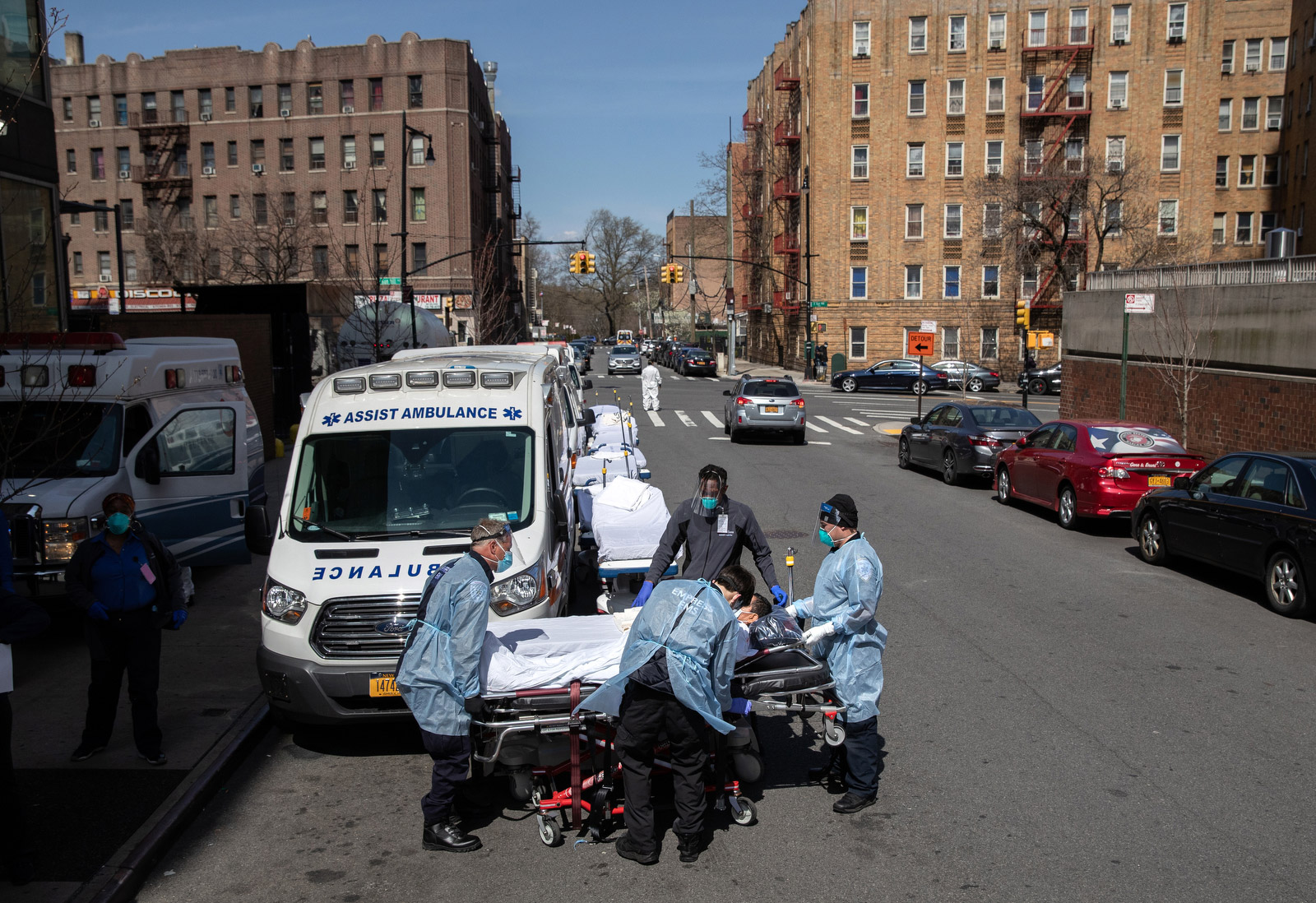 Medics and hospital workers prepare to lift a patient onto a stretcher outside the Montefiore Medical Center in New York.

These workers have demanding jobs, even in the best of times. But now they are being stretched like never before, with 12-hour shifts sometimes turning into more.

“Once or twice a week, many work 24-hour shifts. It's an extreme workload, and in the New York City area, they've been overburdened this last month to say the least,” Moore said. “That is starting to come down, much to their relief.”

None of the workers that Moore spent time with had gotten sick, but they’ve had to be especially mindful because “it's easy to make mistakes when you haven't had as much sleep,” Moore said. “So they try to be conscious of maintaining their protocols even when they're really tired, and that is the main issue. Because the protocols work. The protocols absolutely work.” 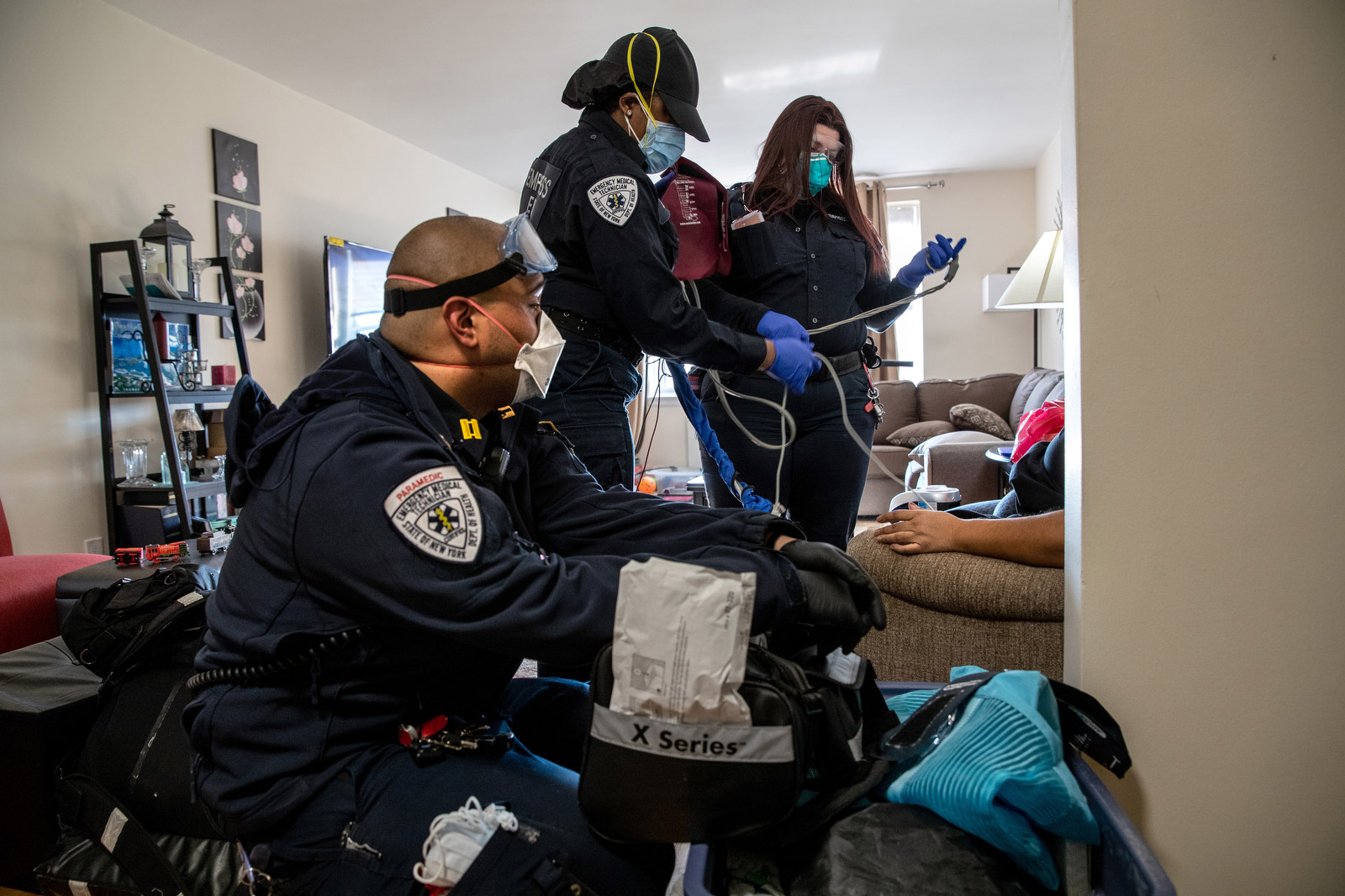 Emergency workers treat a woman in Yonkers on April 22. 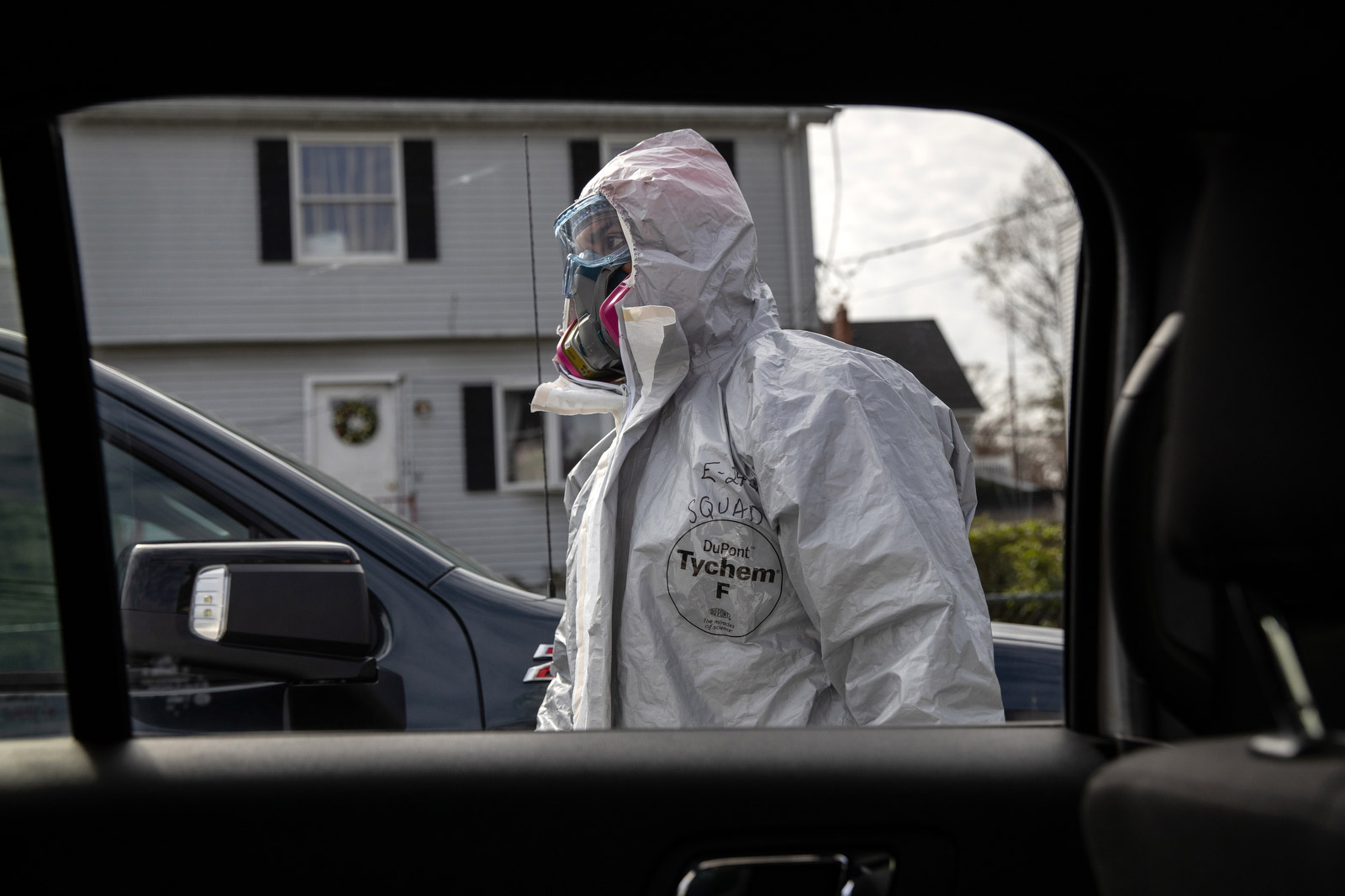 A worker wearing a protective suit prepares to enter the home of a man shortly after his death in New Rochelle, New York, on April 7.

In Moore’s photos, you can see how seriously workers are taking the threat of the coronavirus. All of them are wearing protective face masks and gloves at the minimum. On many calls, they were outfitted in full-body suits and respirators.

Their level of personal protective equipment, or PPE, is decided on a case-by-case basis.

“The paramedics and EMTs I photographed have been fairly well supplied with PPE,” Moore said. “However, they measure its use carefully. They're using it where it's necessary and not necessarily using it on every on every call that comes in. … They don't have enough of it to waste on calls that they don't suspect require it.” 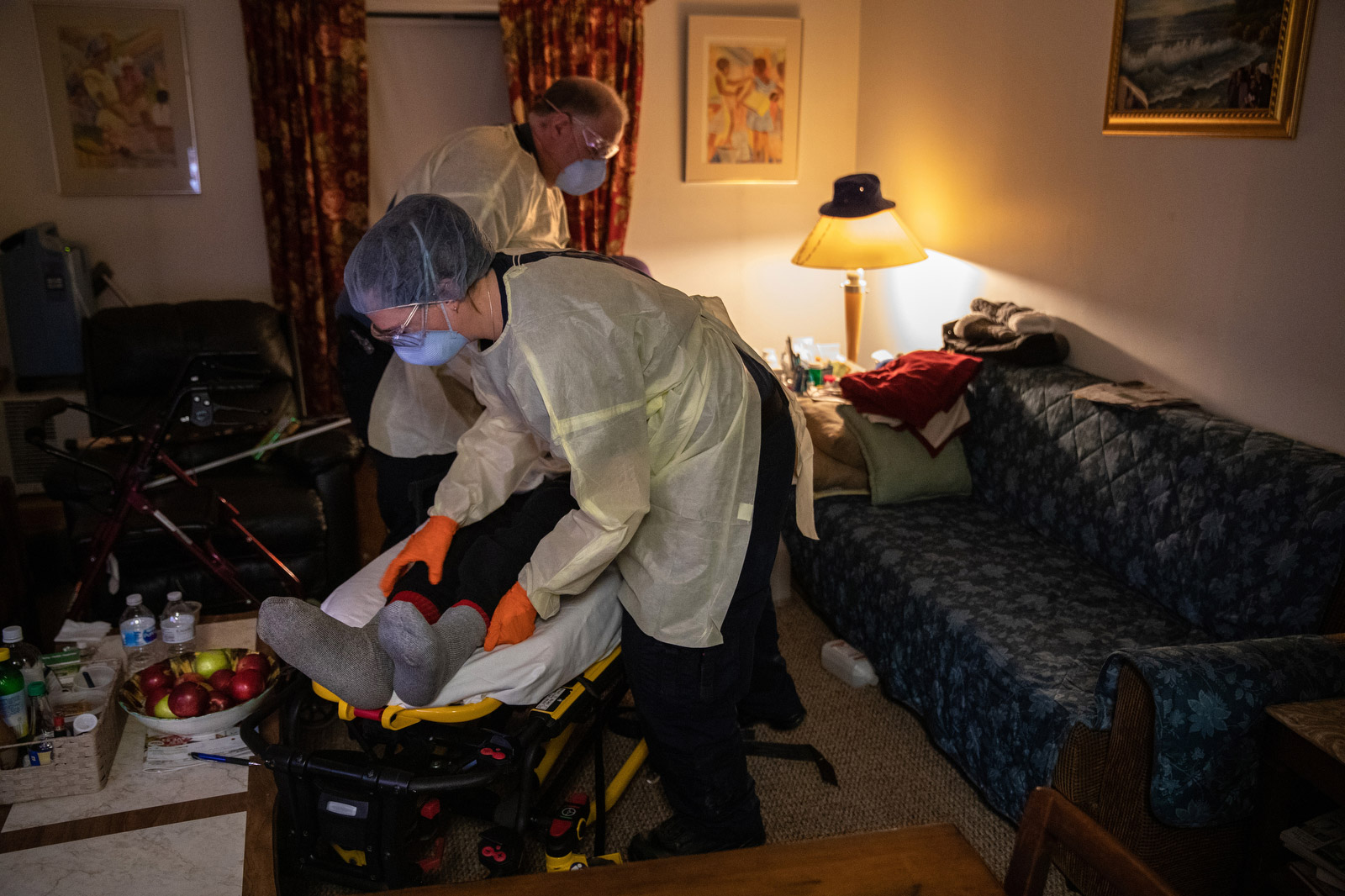 Workers prepare to move a patient from his apartment in Stamford on April 4. 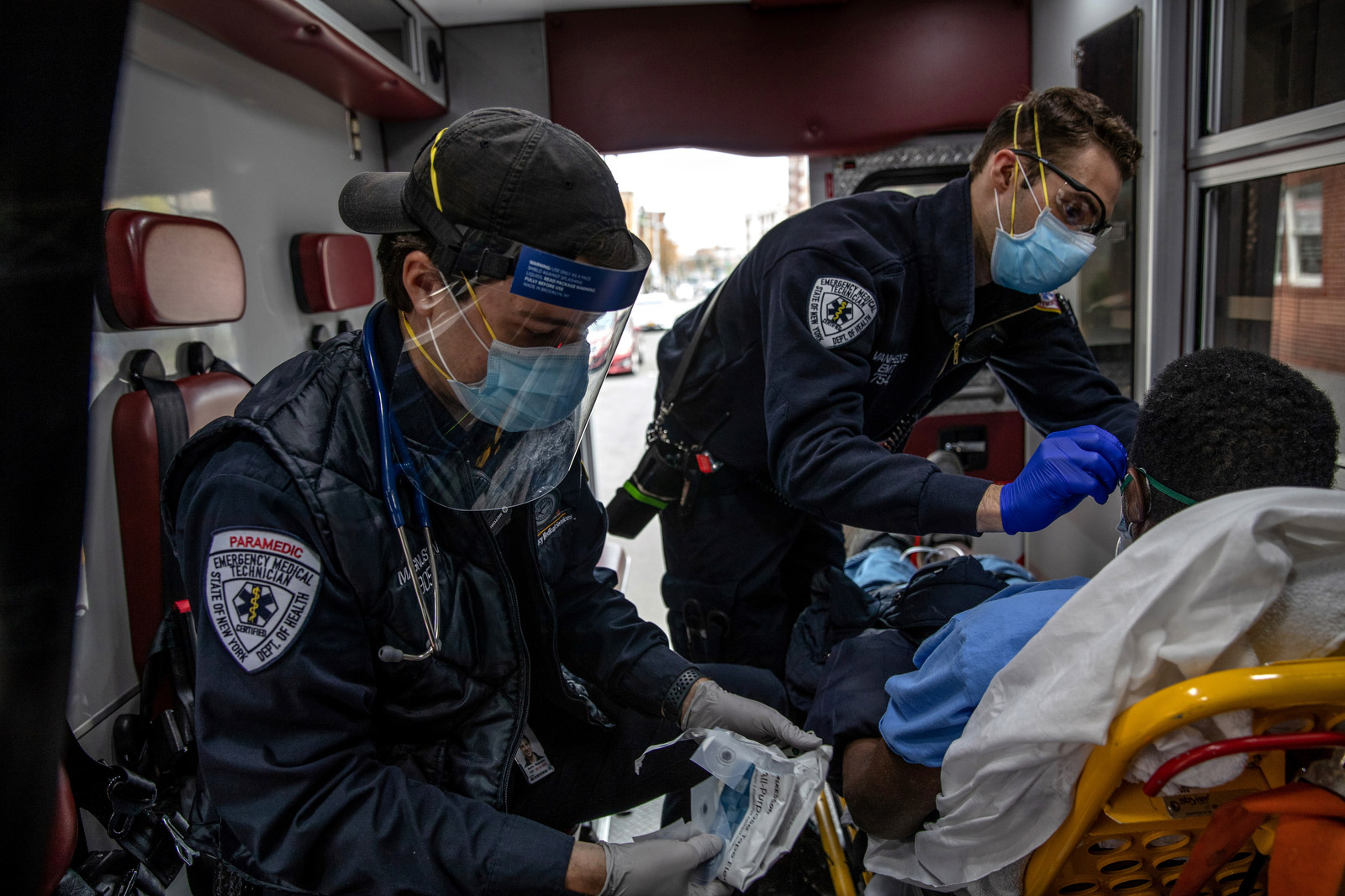 Emergency medical technicians care for a patient inside an ambulance in Yonkers on April 14.

It can be frustrating because there is still no approved treatment or cure for Covid-19. Workers do what they can to help manage the patient’s symptoms, and in many cases that means getting them to the hospital.

Moore has witnessed intubations take place right in people’s living rooms, which he said is tough to see but often necessary to save them.

Covid-19 may have comprised up to 80% of calls a couple of weeks ago, Moore estimated, but those numbers have dropped greatly for the workers he spent time with. 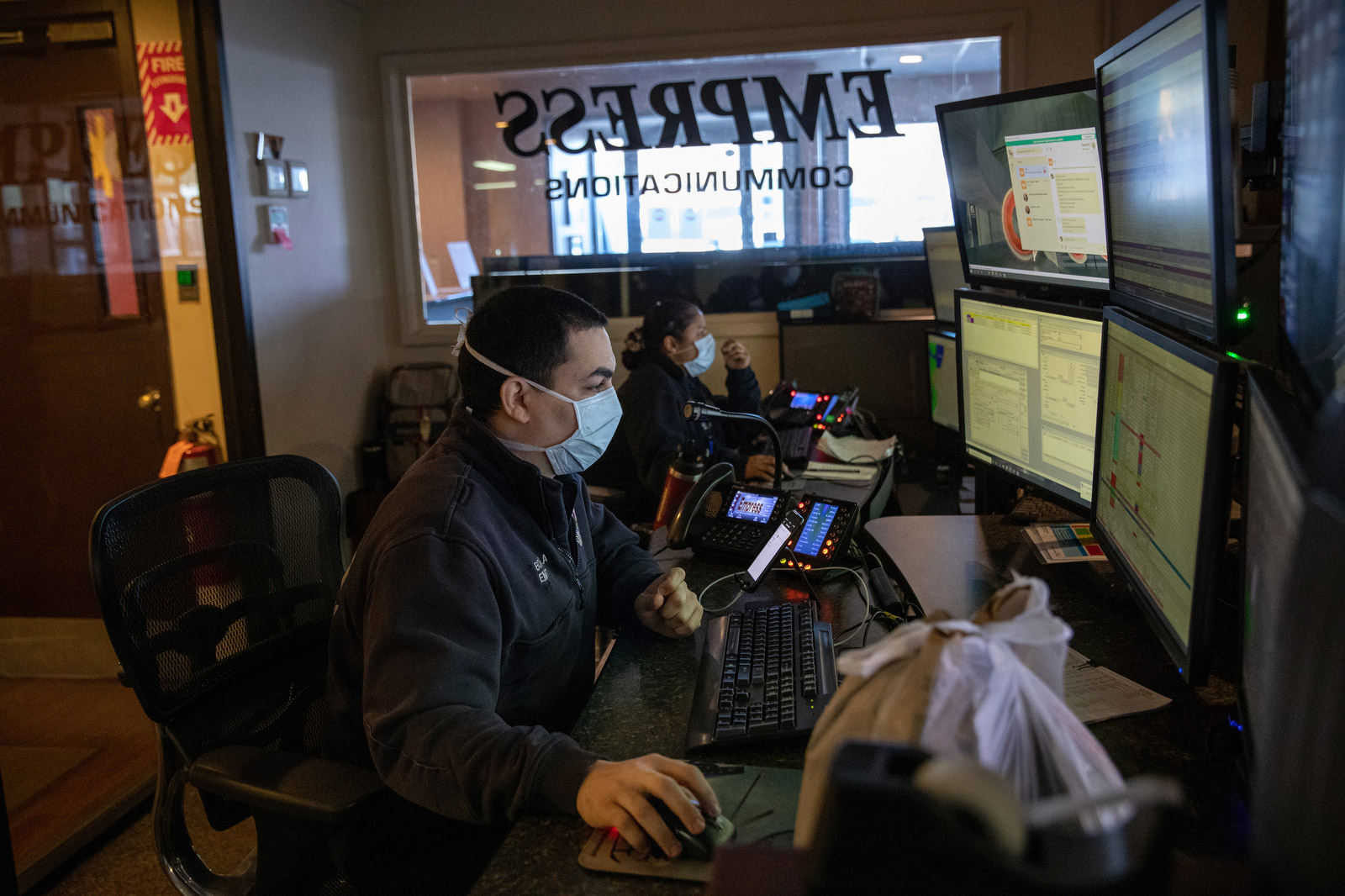 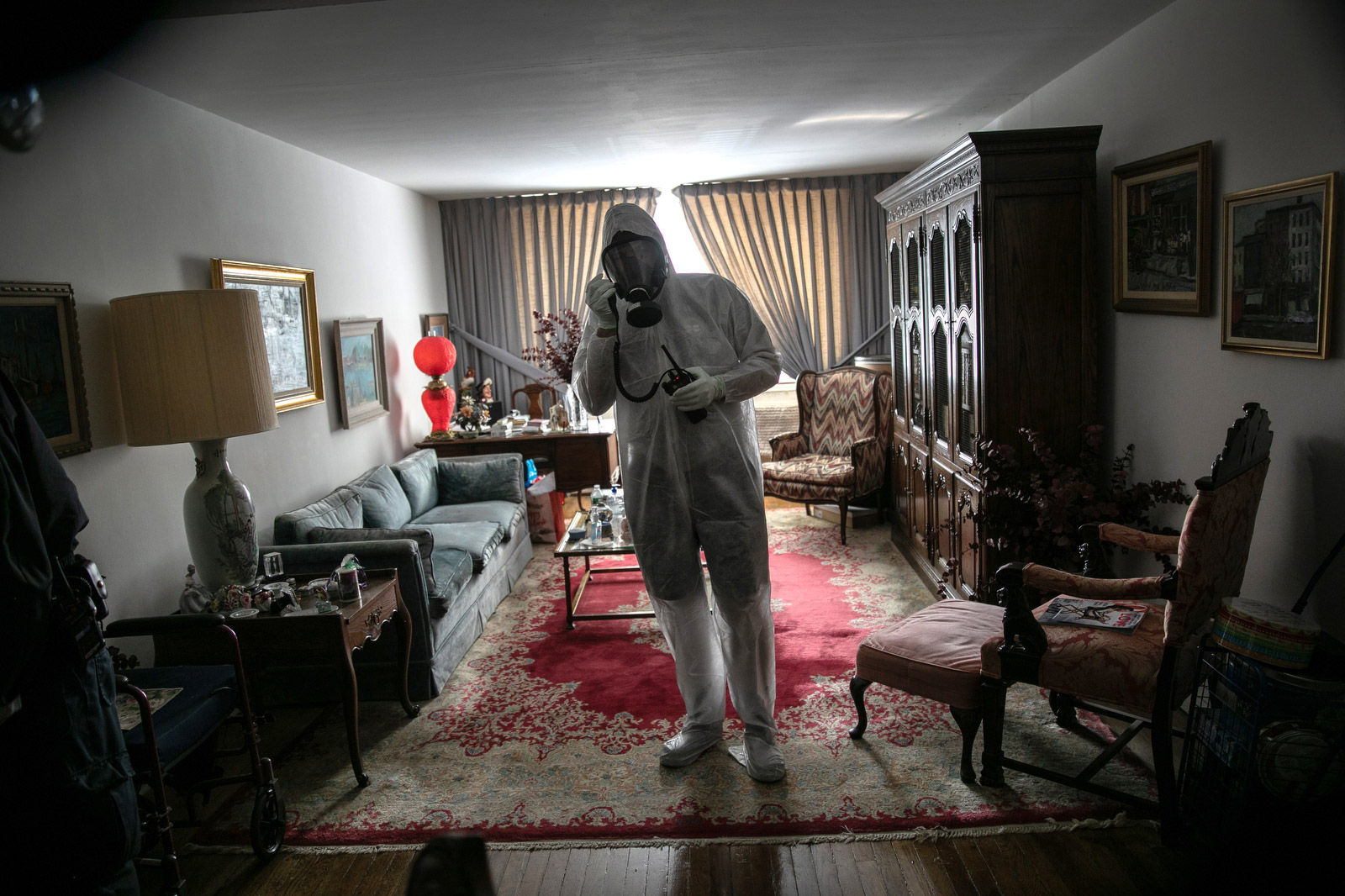 A firefighter wearing personal protective equipment speaks into a radio after responding to a medical call at a Yonkers apartment on April 6.

Moore received consent from each household before entering and taking photos, and he, too, was decked out in varying levels of PPE.

He was always wearing an N95 face mask, even when he was alone with EMTs in an ambulance. He swapped that out for a full face respirator when they responded to a possible Covid-19 call. Sometimes he also put on a protective suit and boot covers.

“It’s important that photojournalists, at least those of us with training in this sort of work, show what the front lines of this story look like. The public is bombarded with statistics every day about the coronavirus crisis. It’s my job to frame this story in a more human way,” Moore said. 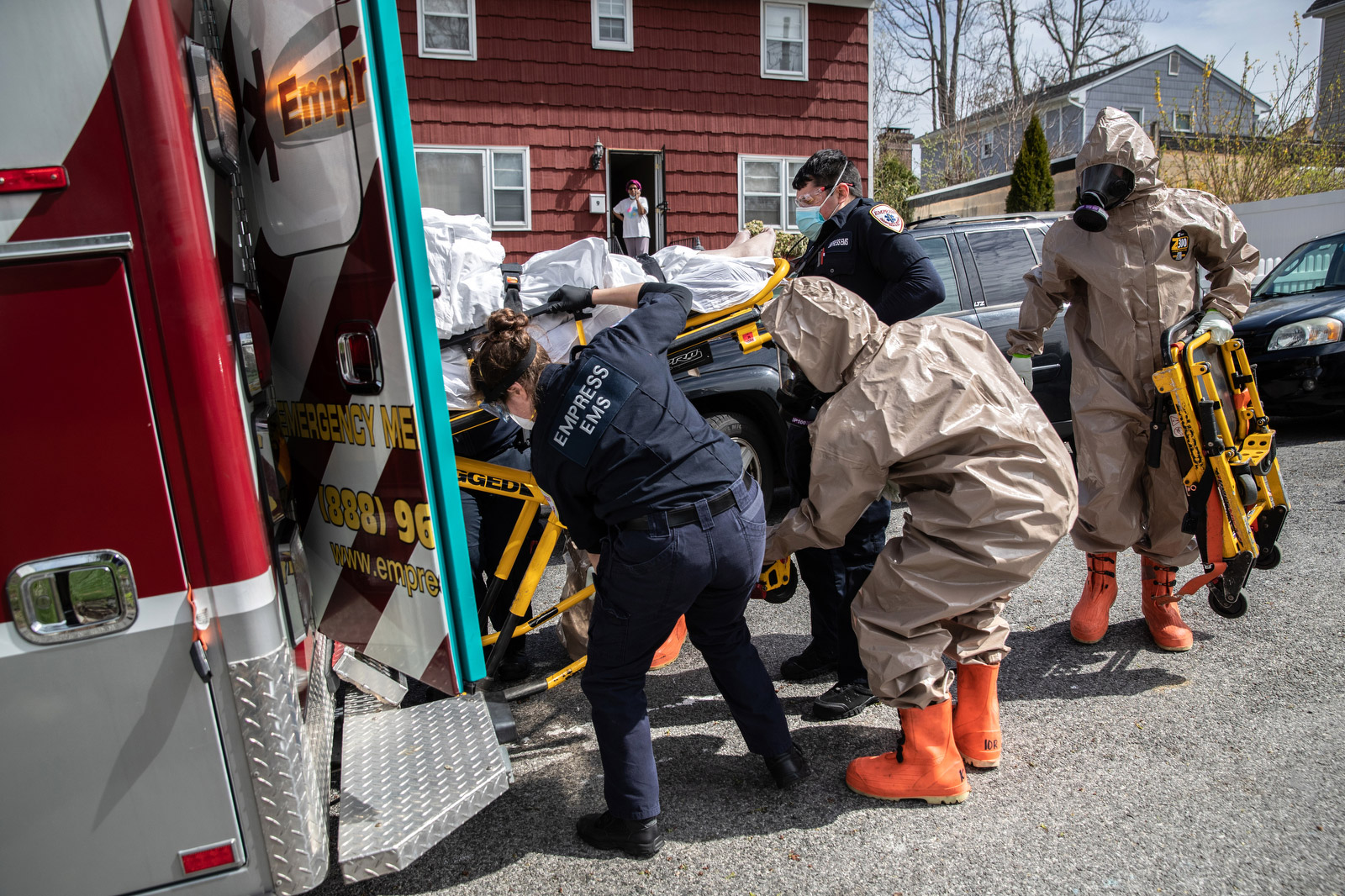 Emergency medical technicians transport a patient in Yonkers on April 14. 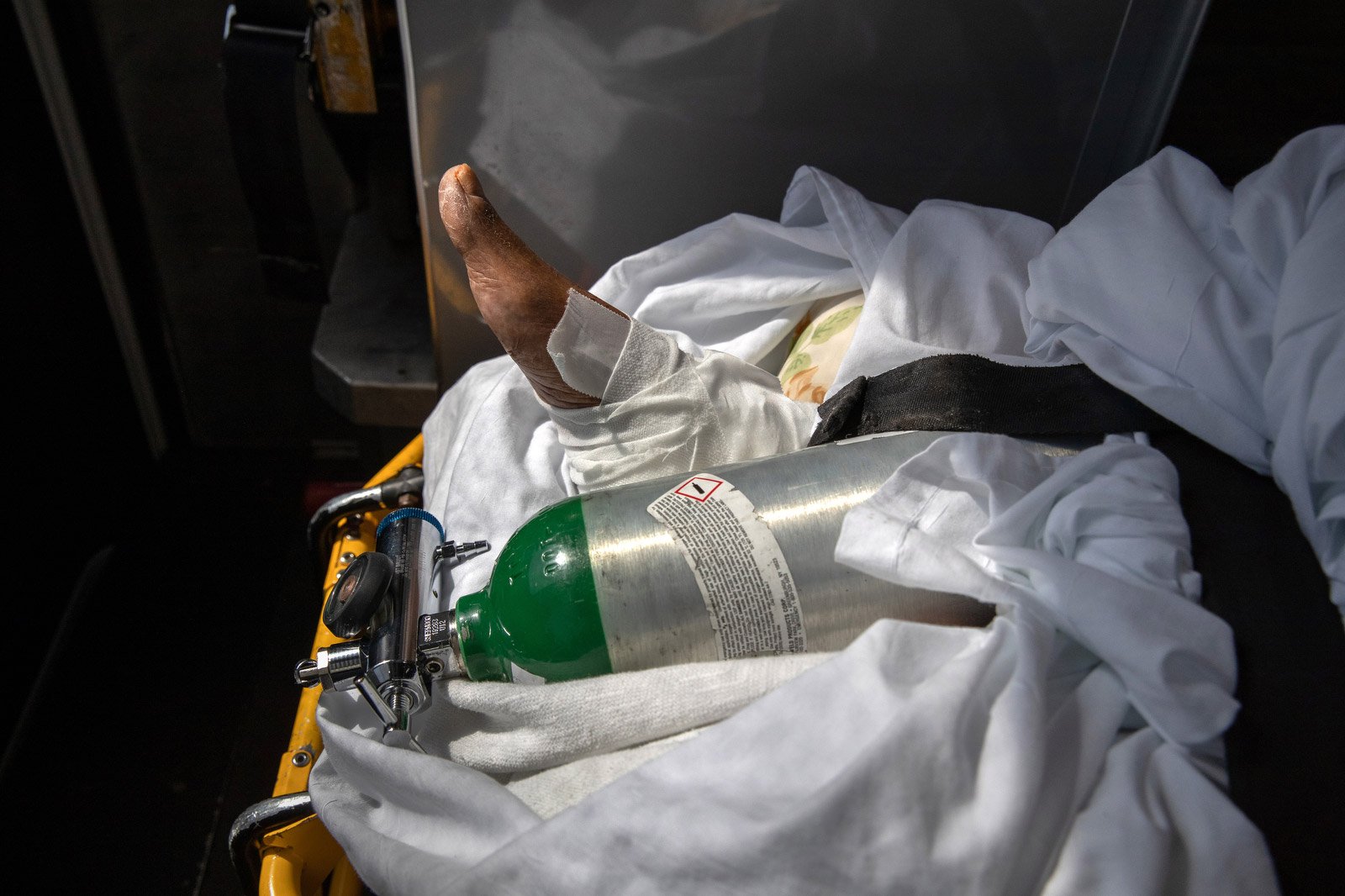 A patient rides an ambulance to the hospital on April 6.

When he’s done taking photos, he’ll remove one pair before taking off his mask and cleaning it with disinfectant wipes and sprays. He also cleans his cameras. Then he removes the second pair and sprays disinfectant again.

But he downplays the risk compared with the risk that the emergency workers face: “Medics have to touch people as part of their work. A photojournalist stands back and touches nothing but his or her cameras or the ground below our feet. Our physical contact is much less with infected surfaces.” 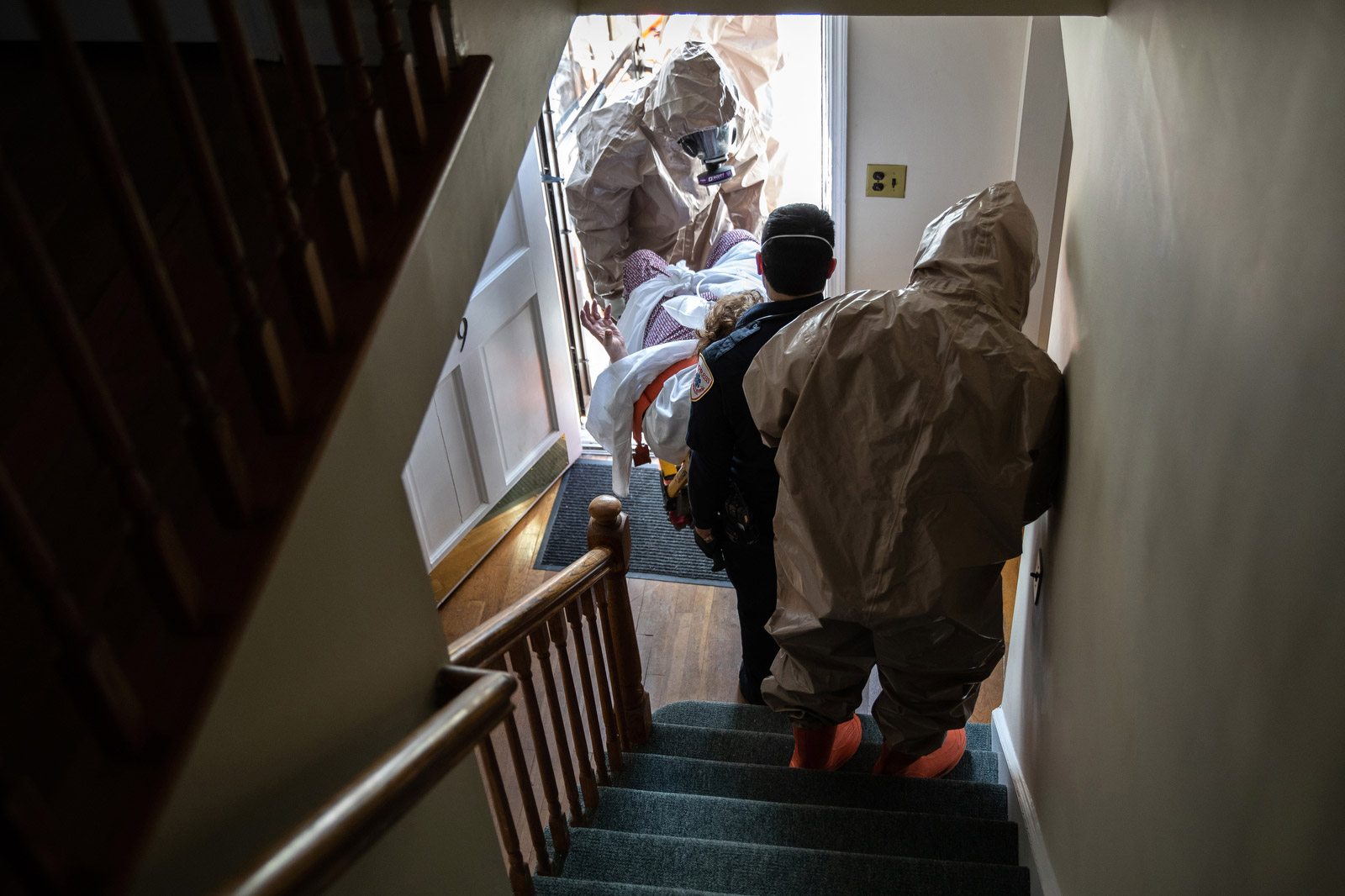 A patient is carried out of a home in Yonkers on April 14. 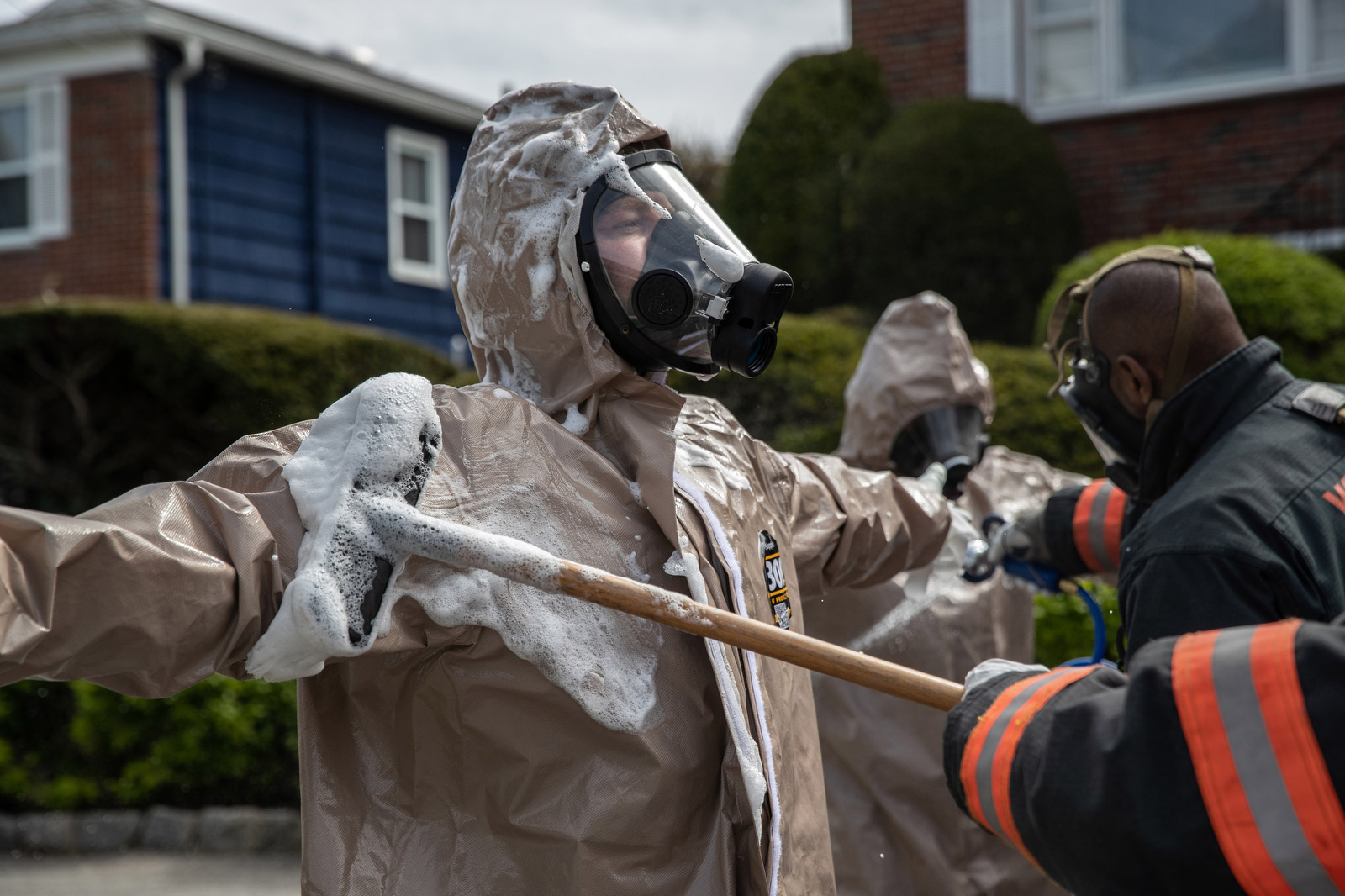 Emergency medical technicians with the Yonkers Fire Department decontaminate their personal protective equipment after a house call on April 14.

Moore learned these techniques in 2014, when he covered the deadliest Ebola outbreak in human history.

For four weeks, Moore documented the crisis from the Liberian capital of Monrovia. The virus claimed thousands of lives.

“I had not expected skills that I'd learned covering the Ebola epidemic in West Africa would be useful here where I live,” he said. “But this is the world we now live in.” 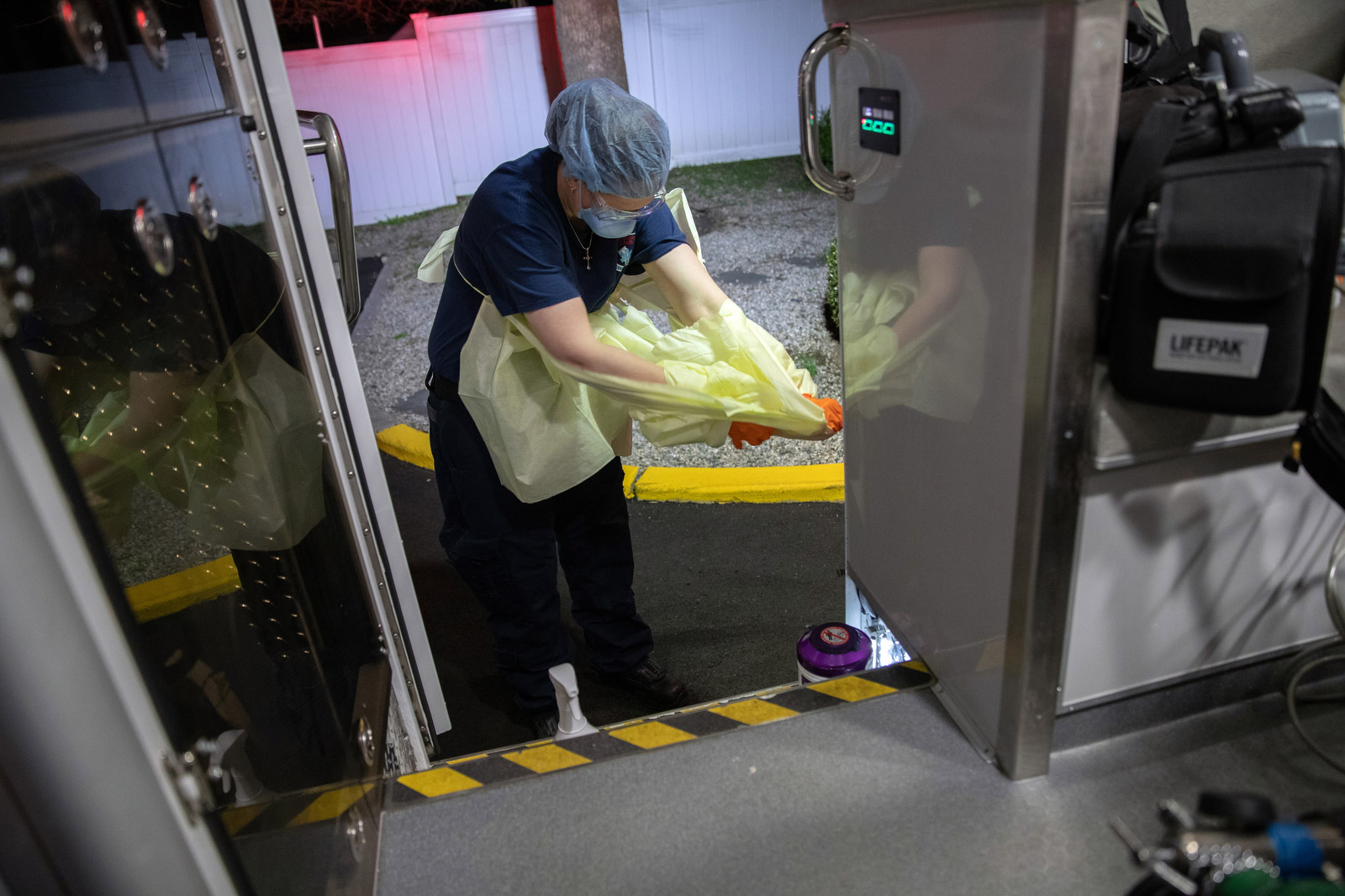 Alex Schwen, an emergency medical technician, removes her personal protective equipment after helping a patient in Stamford on April 4. 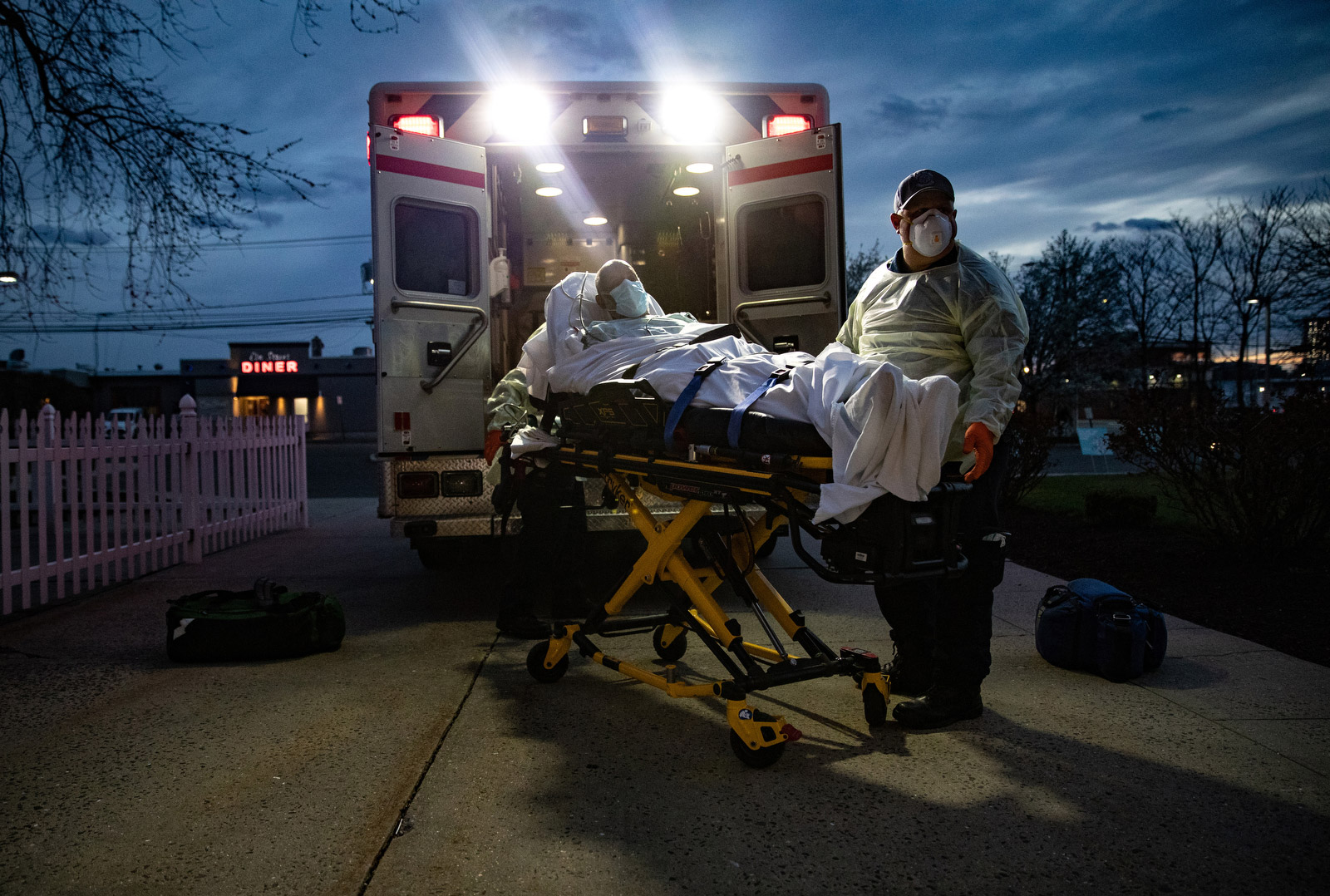 Paramedic David Brody prepares to load a patient into an ambulance in Stamford on April 2.