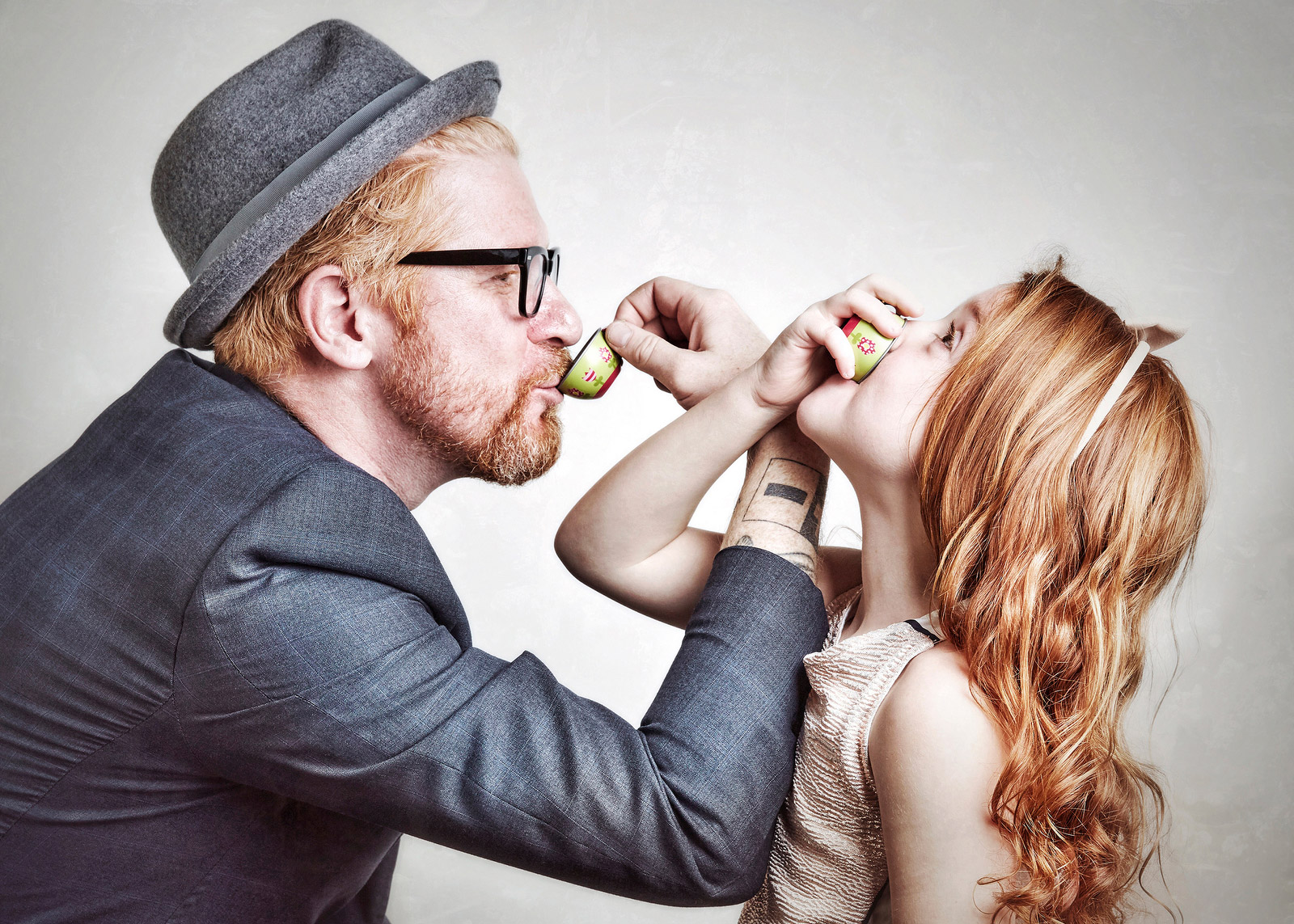 Steven and his daughter Marlo pose together for The Redhead Project, which photographer Keith Barraclough started in 2013. Barraclough has taken photos of more than 500 redheads across the United States.

Steven and his daughter Marlo pose together for The Redhead Project, which photographer Keith Barraclough started in 2013. Barraclough has taken photos of more than 500 redheads across the United States.

That’s what tends to happen when you make up just 1-2% of the entire human population.

The extra attention can be difficult to handle, especially growing up. There might be the occasional wisecrack. Sometimes it turns into bullying or harassment.

But redheads are also being celebrated more than ever before. 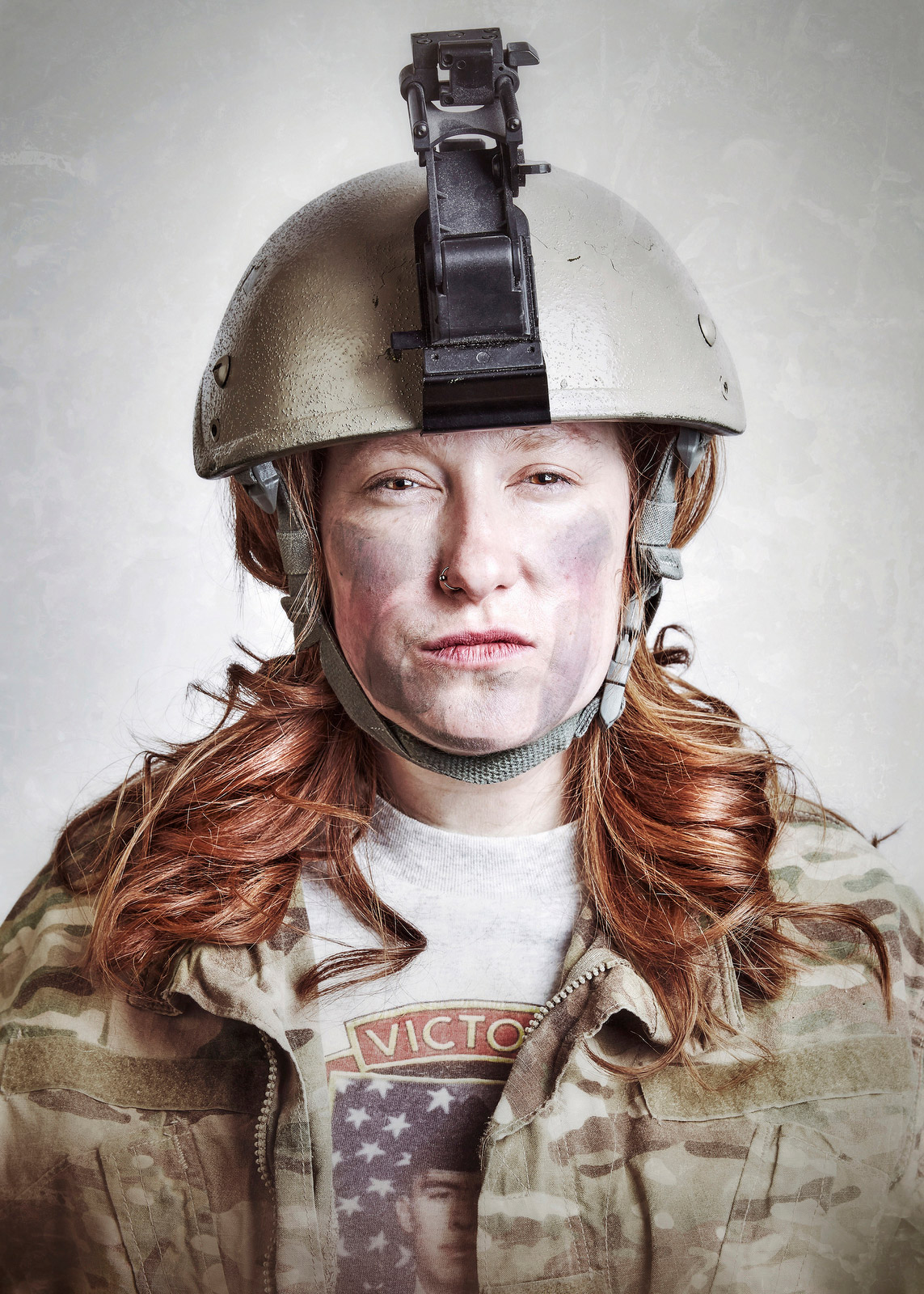 Amanda wears military gear to reflect her role as a military wife. The Redhead Project highlights each subject’s hair but also illustrates their own unique personality. 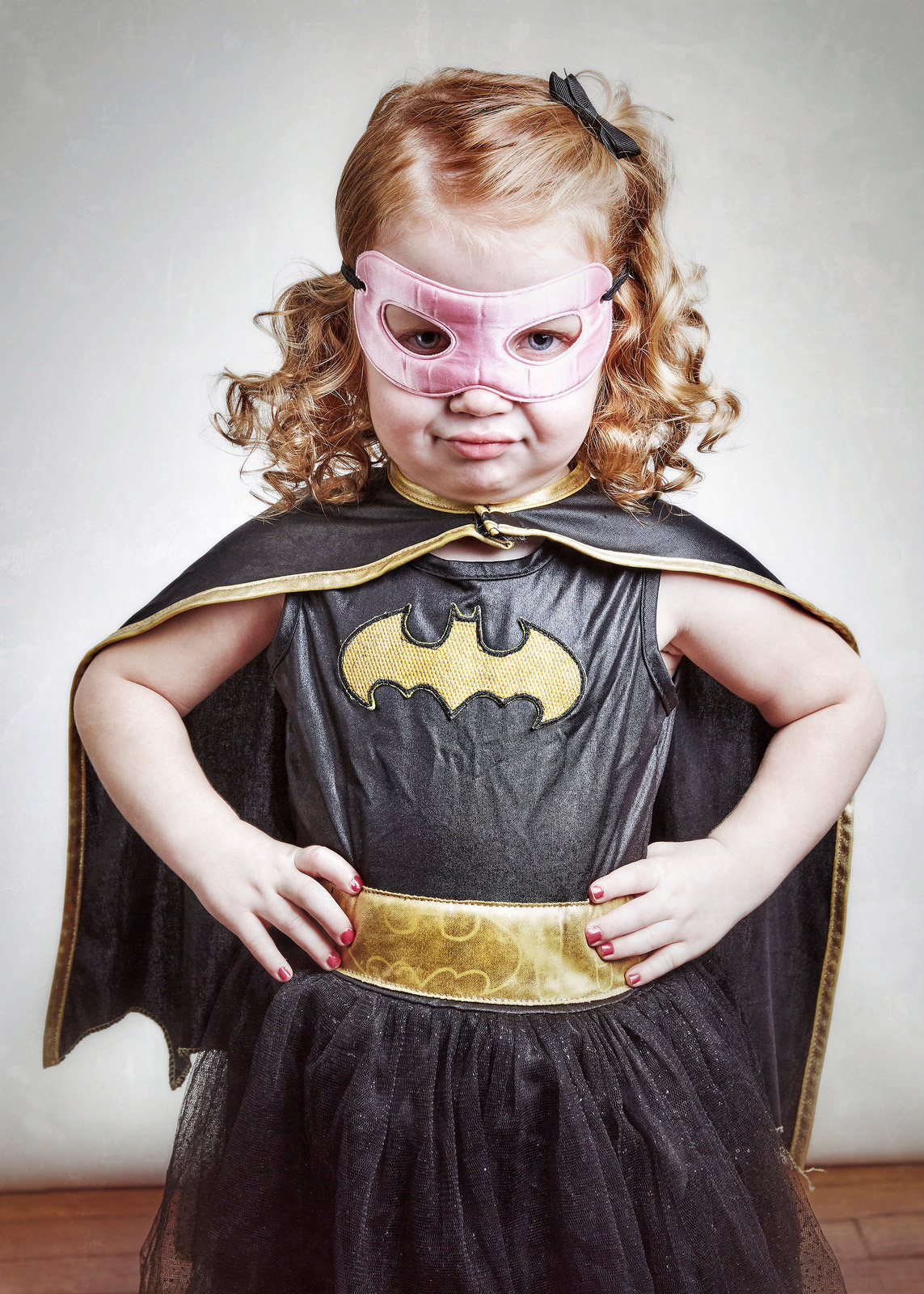 Many parents bring their children to take part in The Redhead Project. Gemma loves the idea of being a superhero, her mom said, but she also loves pink and dresses that twirl. “For her, it was the best of both worlds.” 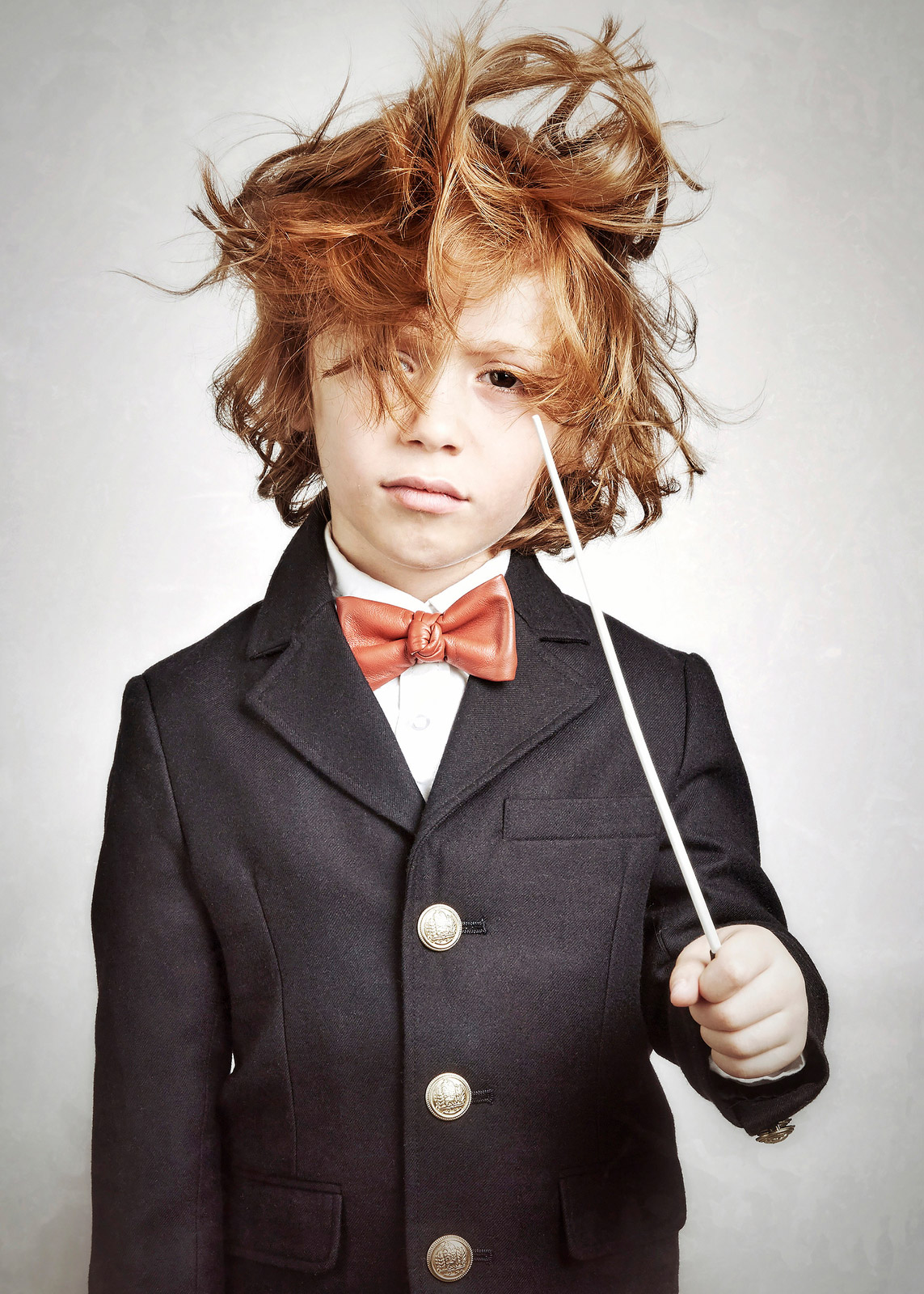 Auguste started taking piano lessons at age 3, and he’s wearing a “conductor jacket” because of his love of classical music. “A lot of my redheaded friends talk about being made fun of for their hair as kids,” his mom told The Redhead Project. “Auguste loves it and gets a little smile when he sees other kids with the same color hair.“ 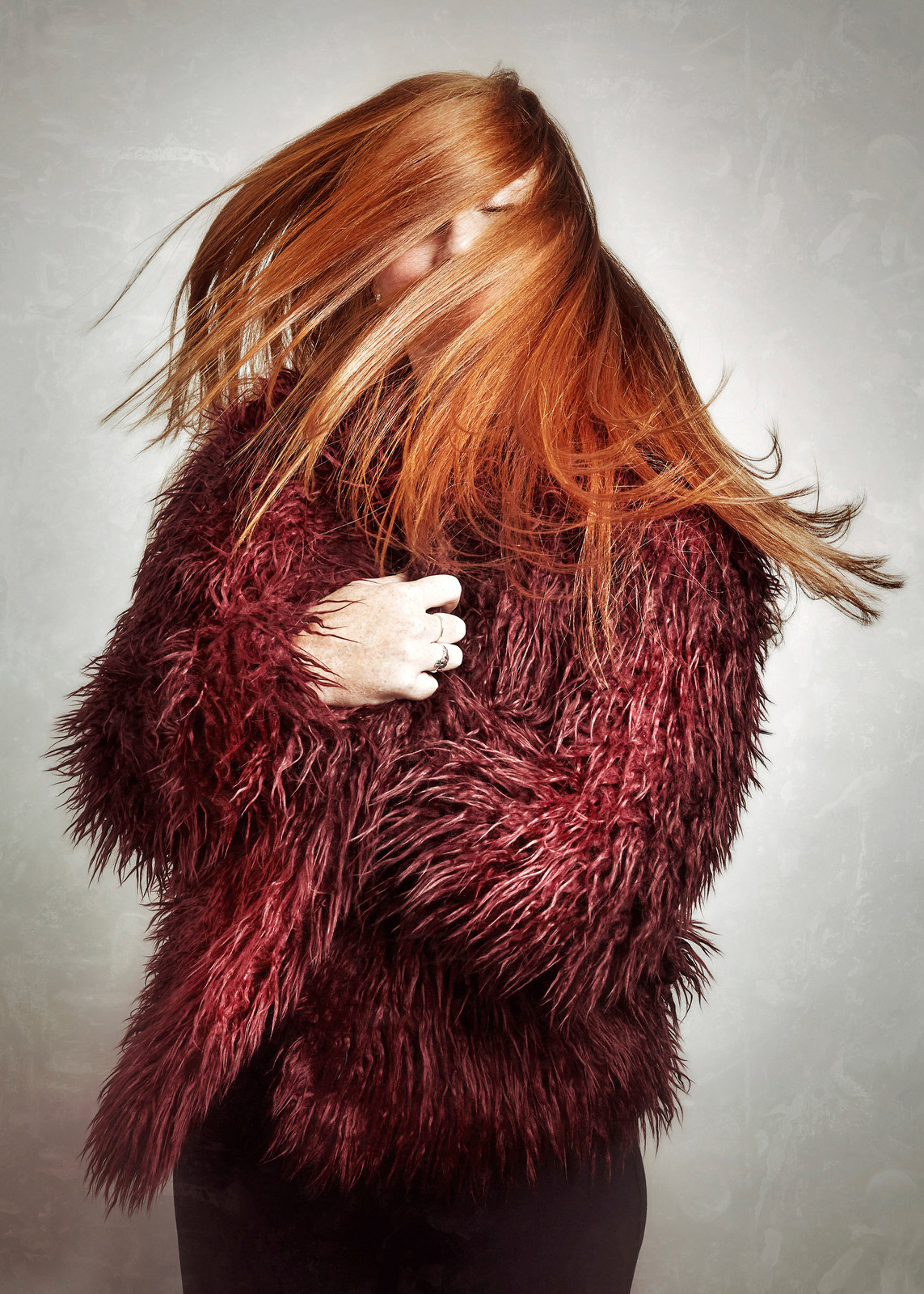 Kelsey wears one of her favorite coats for her shoot. She said that in this photo she was thinking about Penny Lane, the free-spirited character from the movie “Almost Famous.” 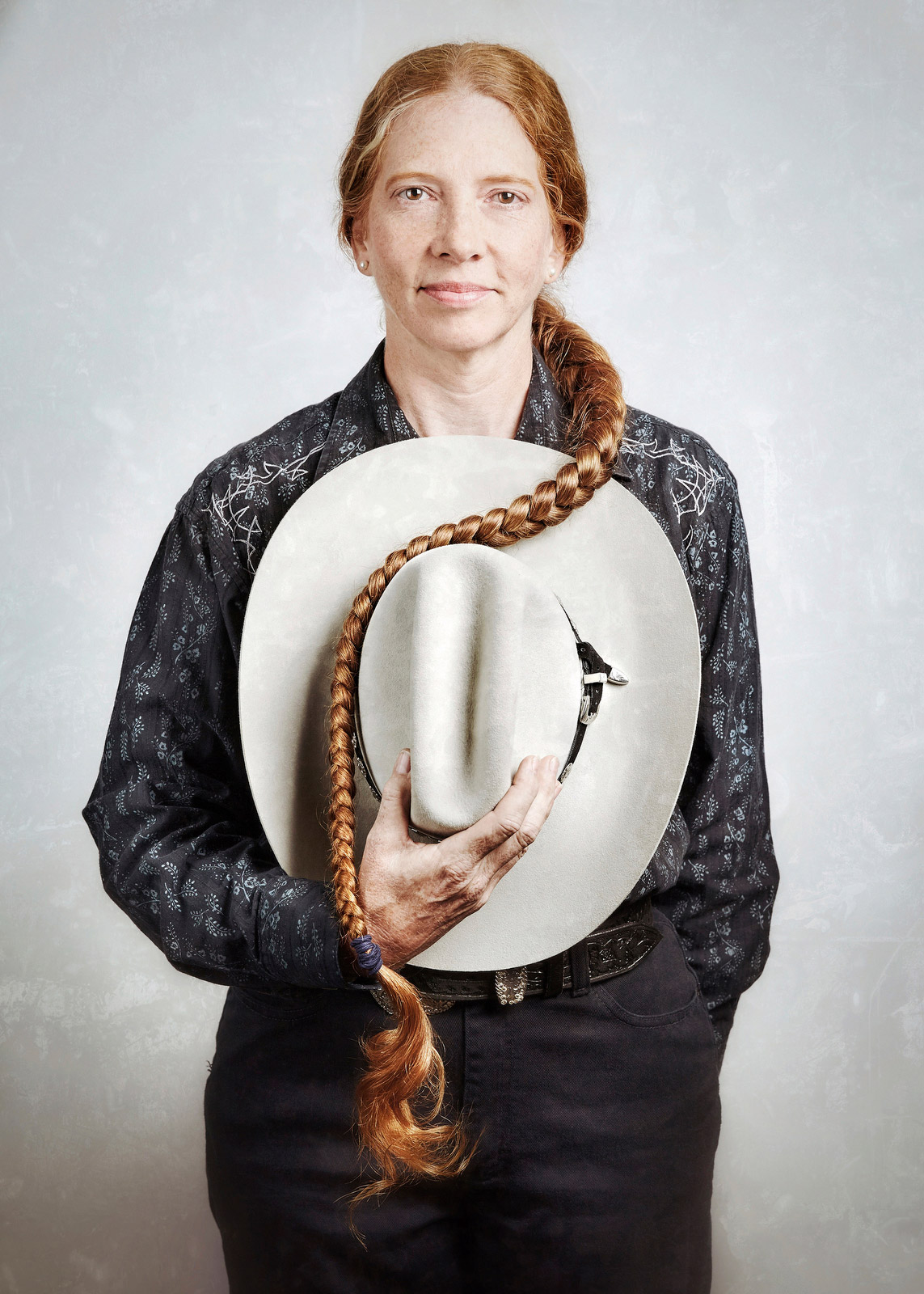 “I chose this outfit to show the new me,” Elizabeth said. She had just recently started volunteering at a horse rescue. “I hope the pose I struck reflects the new confidence I have found from working with and riding a near-1-ton animal that is taller than me. There is a quiet confidence and stillness you have to develop along with physical and emotional strength and resiliency.” 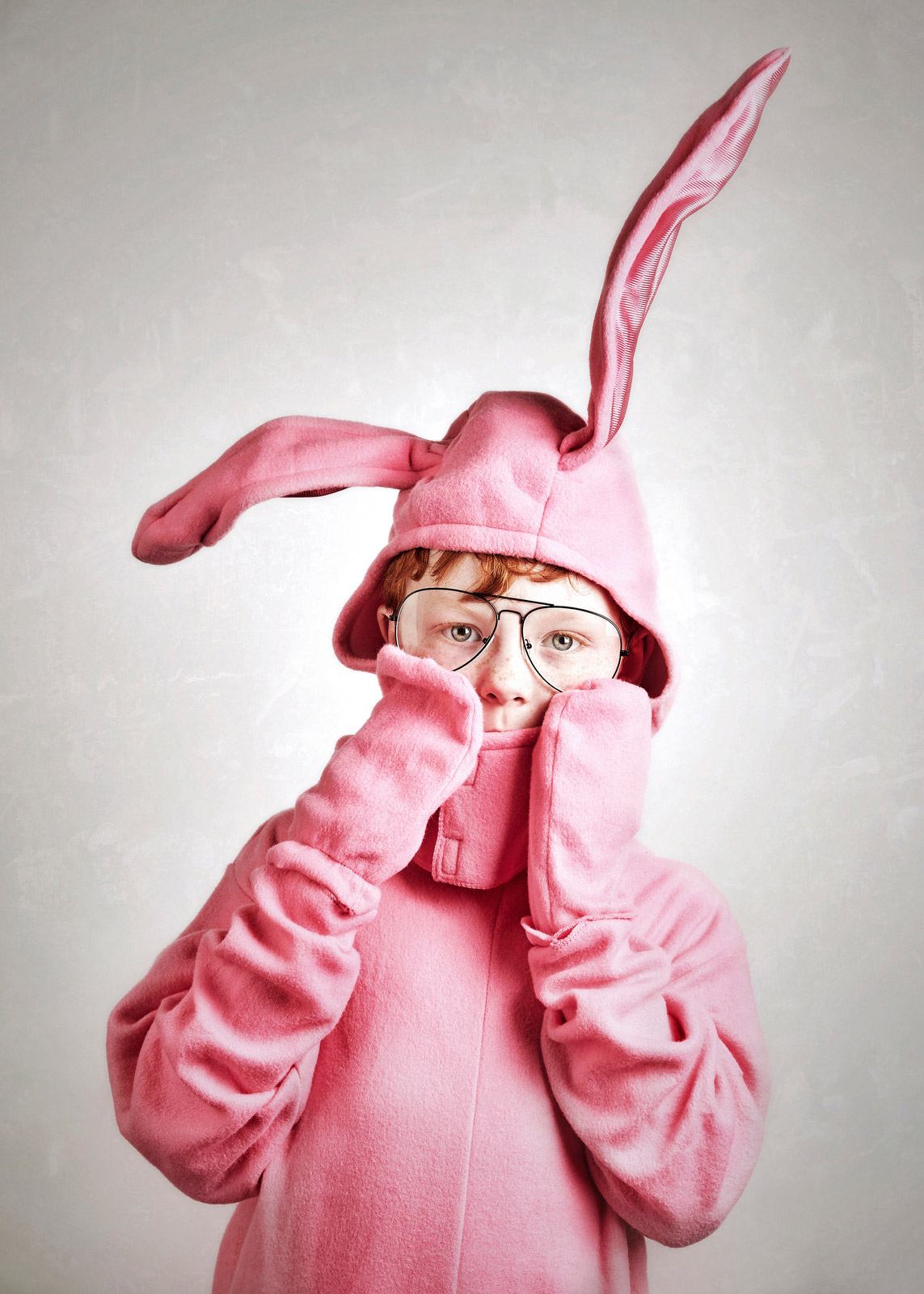 Liam’s bunny suit is for one of his favorite movies, “A Christmas Story.”

Some cities now have entire festivals dedicated to redheads. There’s a National Redhead Day and a World Redhead Day — both started in the last few years.

And then there’s The Redhead Project.

Since February 2013, photographer Keith Barraclough has been taking portraits of redheaded people across the United States. With the help of his wife, Kate Lorenz, he has photographed more than 500 redheads in nearly two dozen cities. 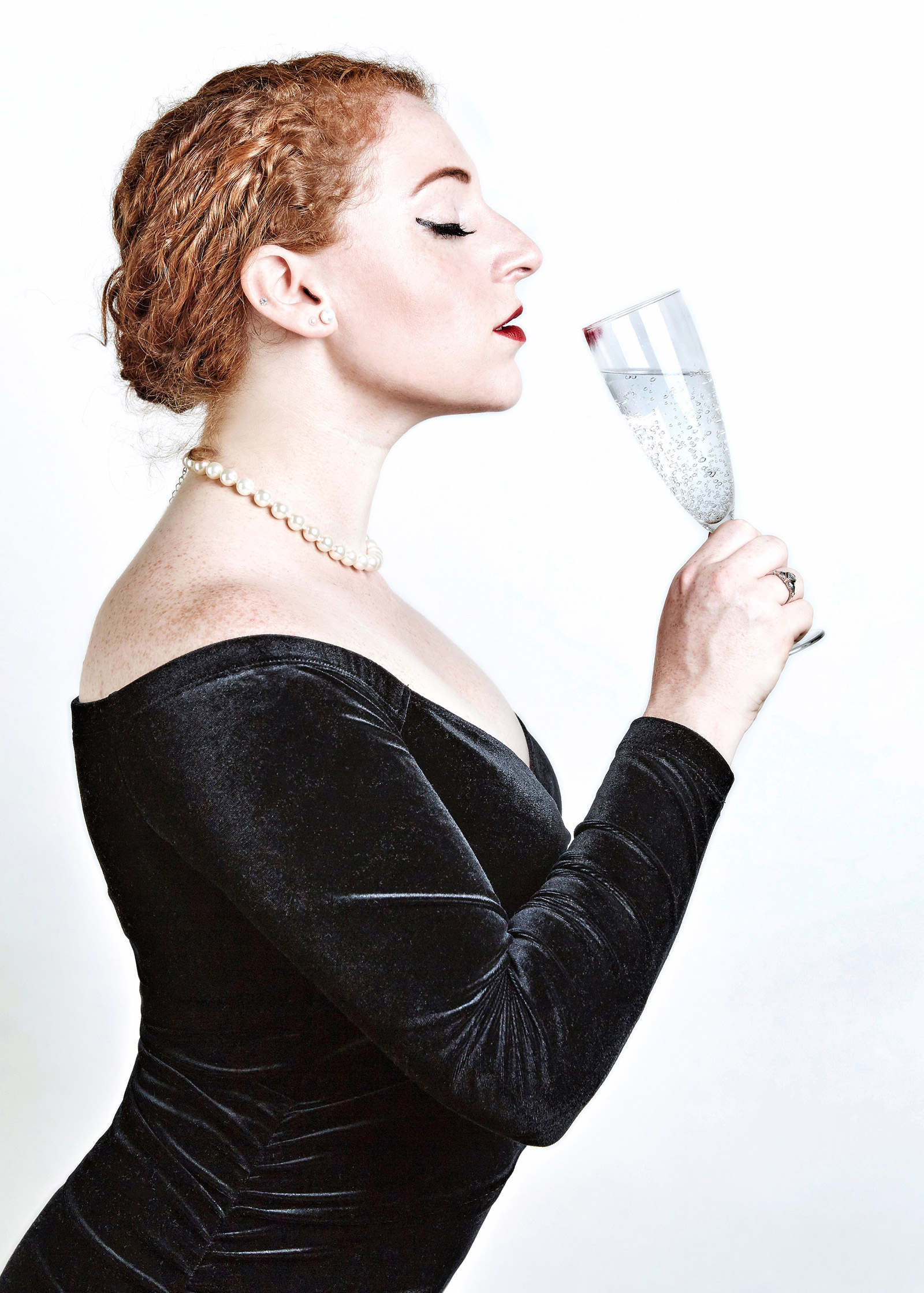 Dara is a professional actor who sings and dances. “I don't usually wear my hair up in a slicked-back bun, but whenever I do, I always feel elegant and classy,” she told The Redhead Project. “The dress, pearls, champagne and lipstick all help build this ‘character’ I create for myself when I wear my hair up.”

These striking images showcase the subjects’ red hair. But they also have a fun, quirky side, revealing each person’s unique style and personality.

Each person comes to the photo shoot with props — maybe their favorite clothing or items that reflect their hobbies and passion. Then they work with Barraclough on a series of shots together.

“Since it's about them and it's about who they are as a person, I really want them to be involved,” said the New York-based photographer, who is not a redhead and barely knew any redheads before starting this project. 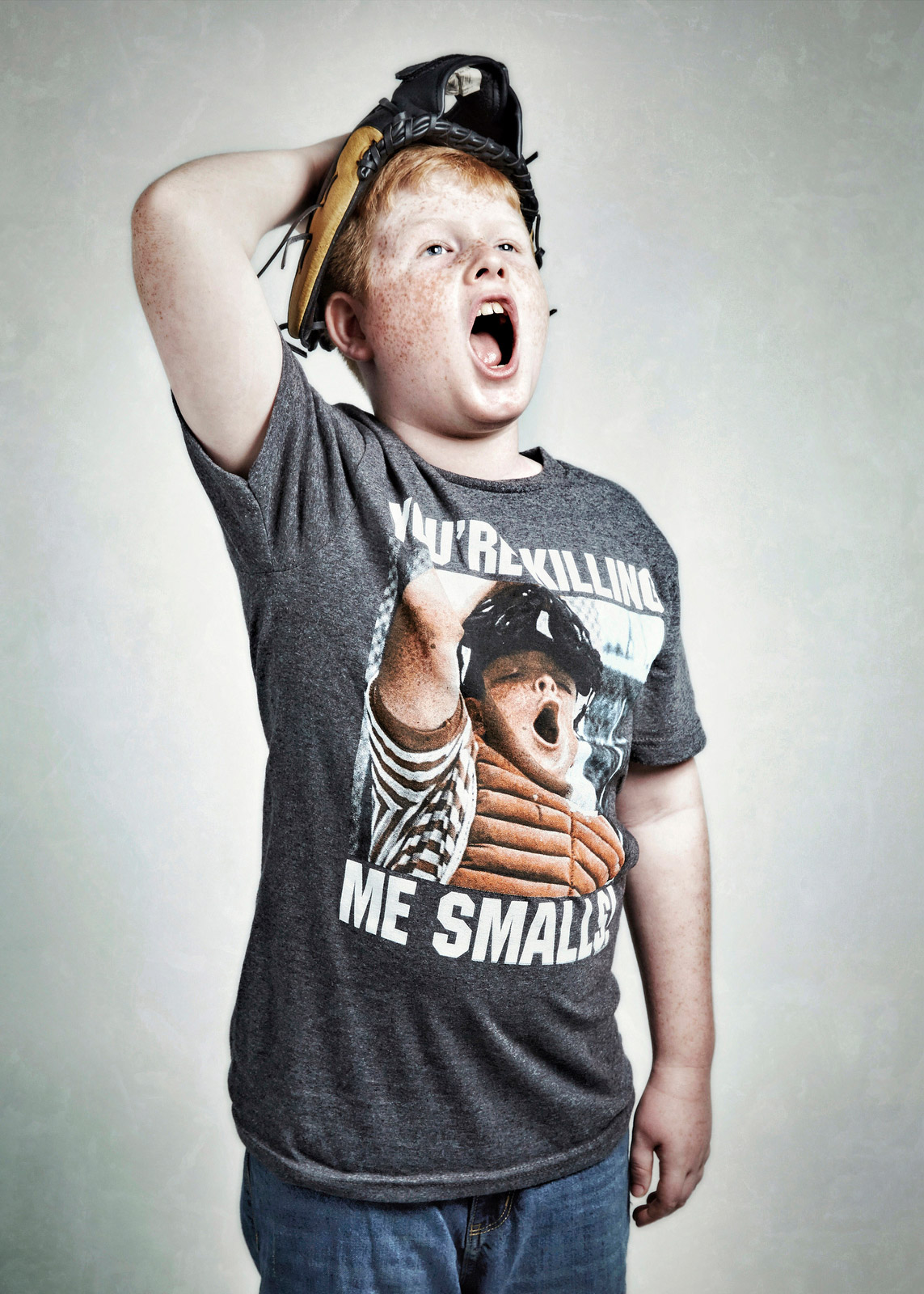 Michael relates to Ham, a character from the baseball movie “The Sandlot.” Ham also had red hair and freckles, “but Ham was also a tough ball player,” Michael’s mom told The Redhead Project. Michael “loved having that shirt because it gave him rare representation displayed for all to see.” 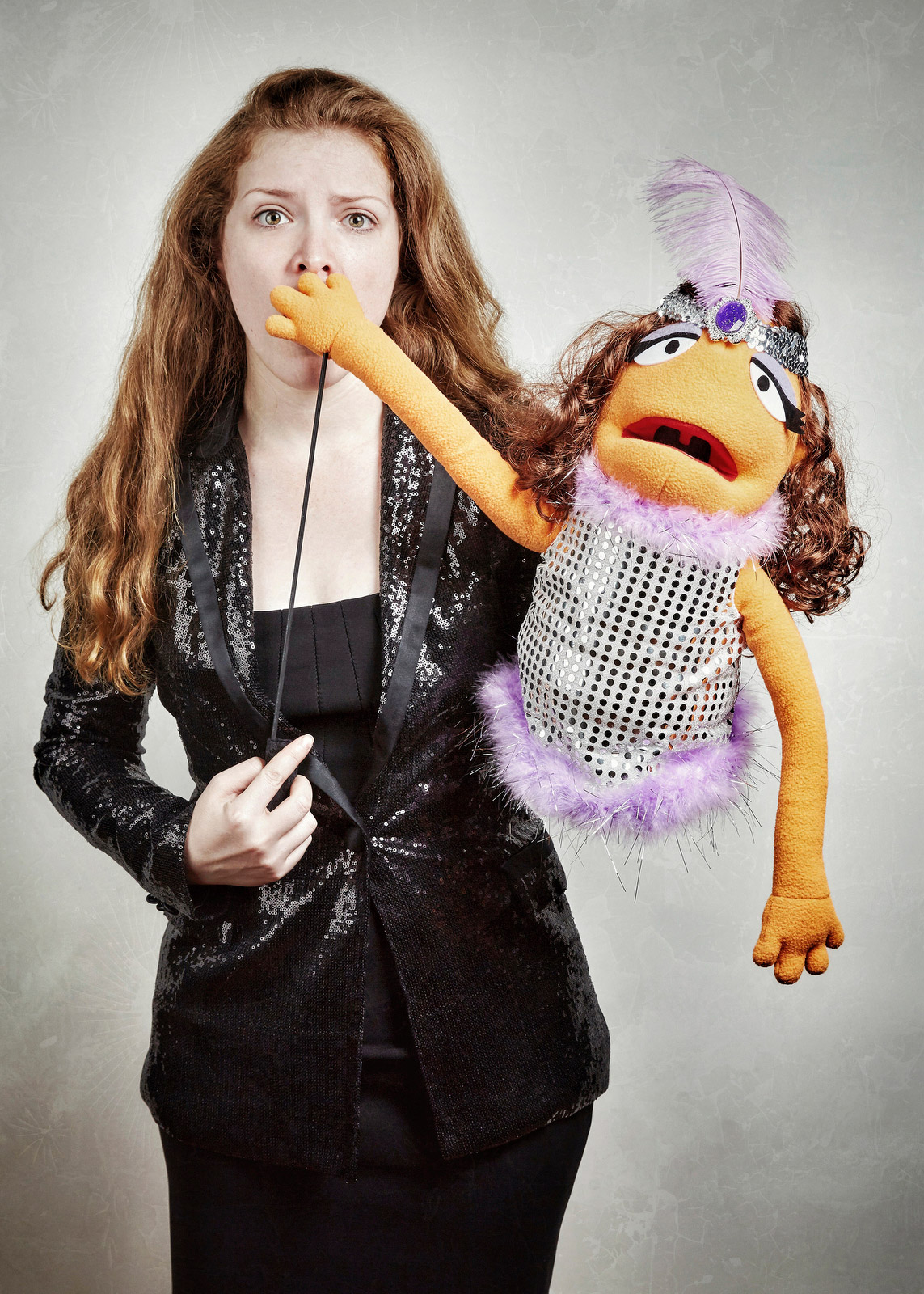 Reagan, an actor, shows her silly side with a muppet she had made at a toy store. 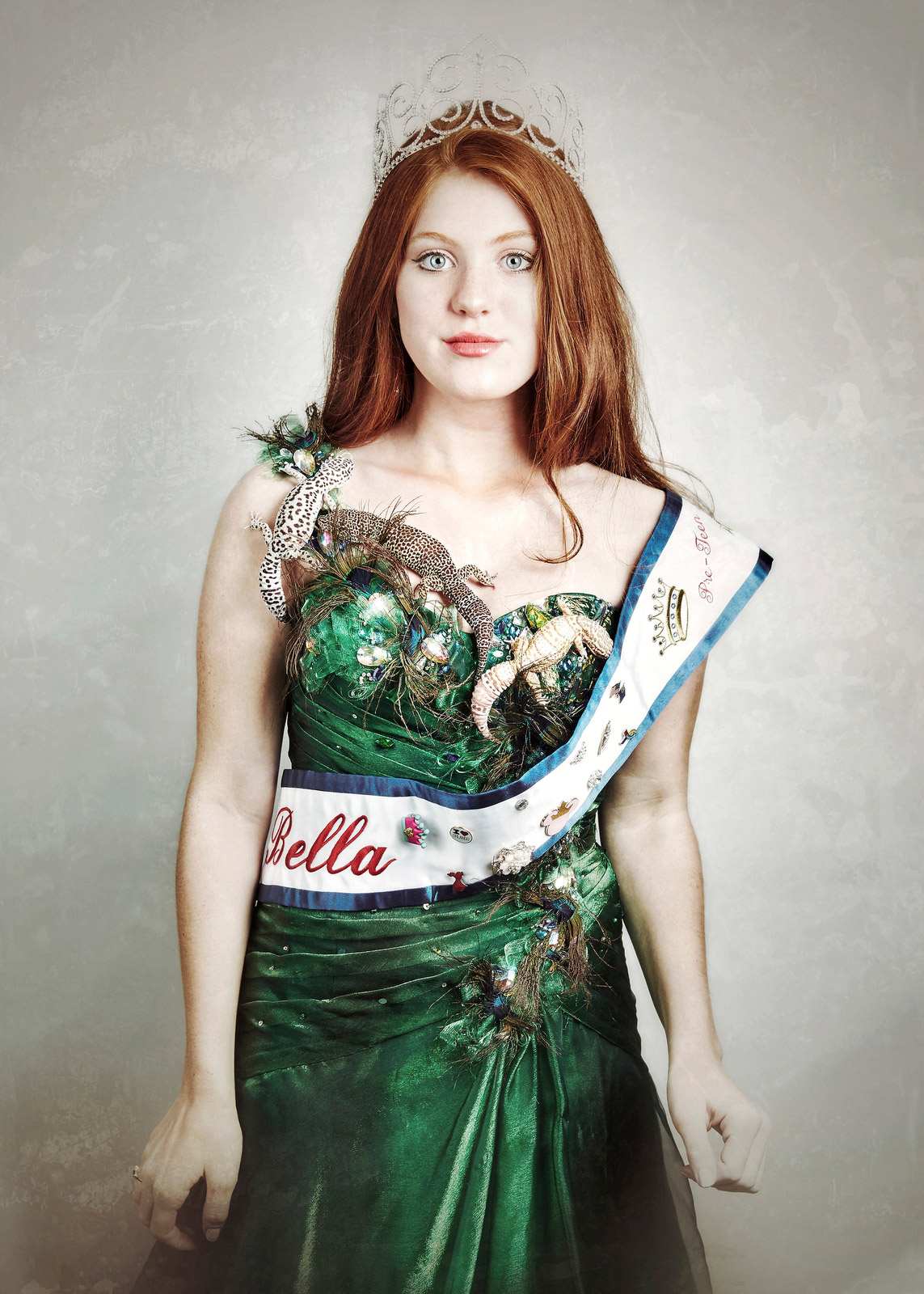 Bella wears the gown she wore at a preteen beauty pageant she won. Pageants were a big part of her life at the time, but so was her love of reptiles. She had been breeding geckos. 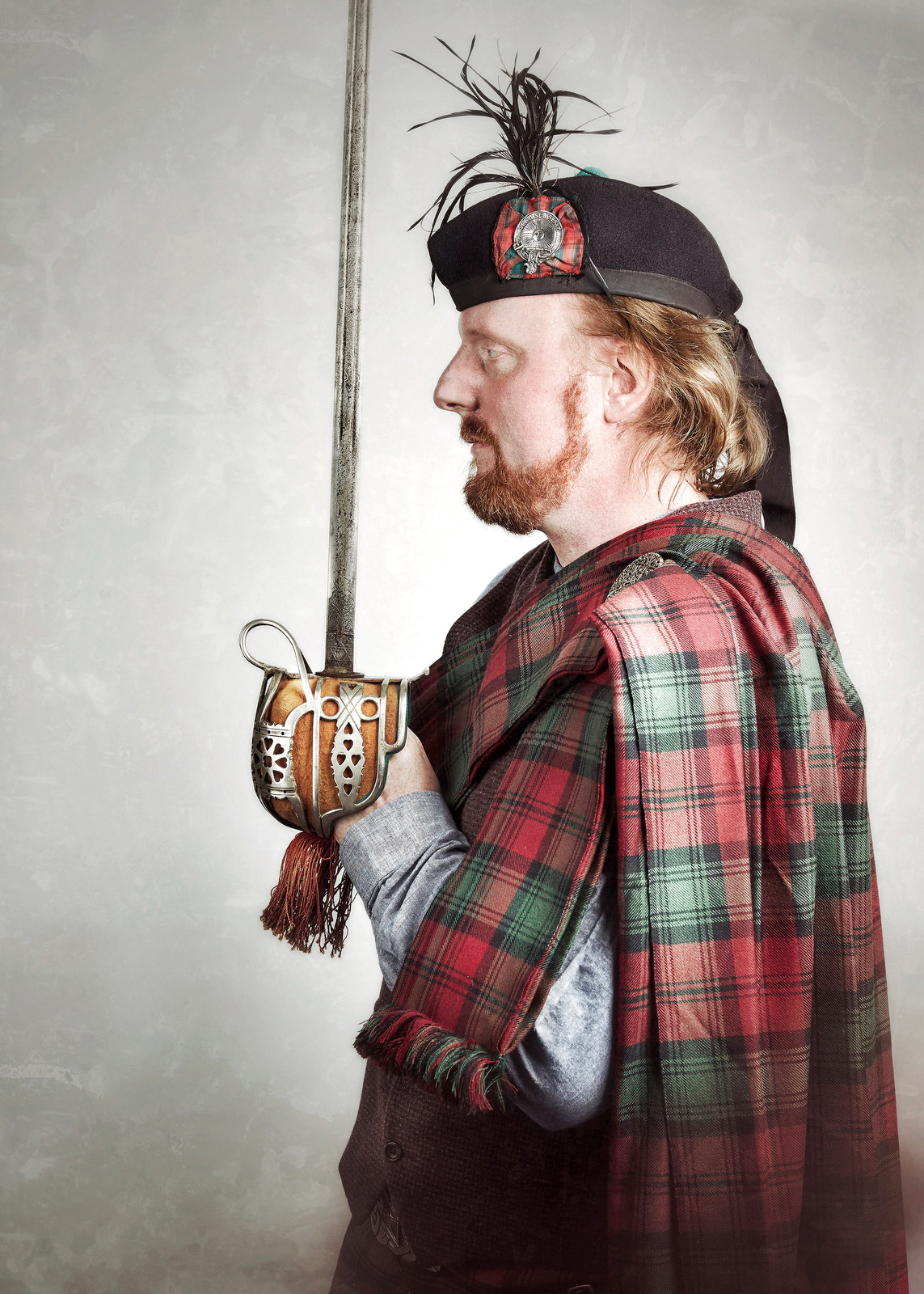 Patrick, an actor and filmmaker, once used to make kilts.

The Redhead Project began as a simple promotional tool for Barraclough. He had photographed a man on a corporate shoot and was taken by how the man’s red hair and blue eyes popped on a pure white background. He wanted to try to re-create that.

So he photographed about a dozen more redheads. Word soon spread about those photos, and he got more people who wanted to take part. When he and Lorenz started posting the images on social media, the project really took off. 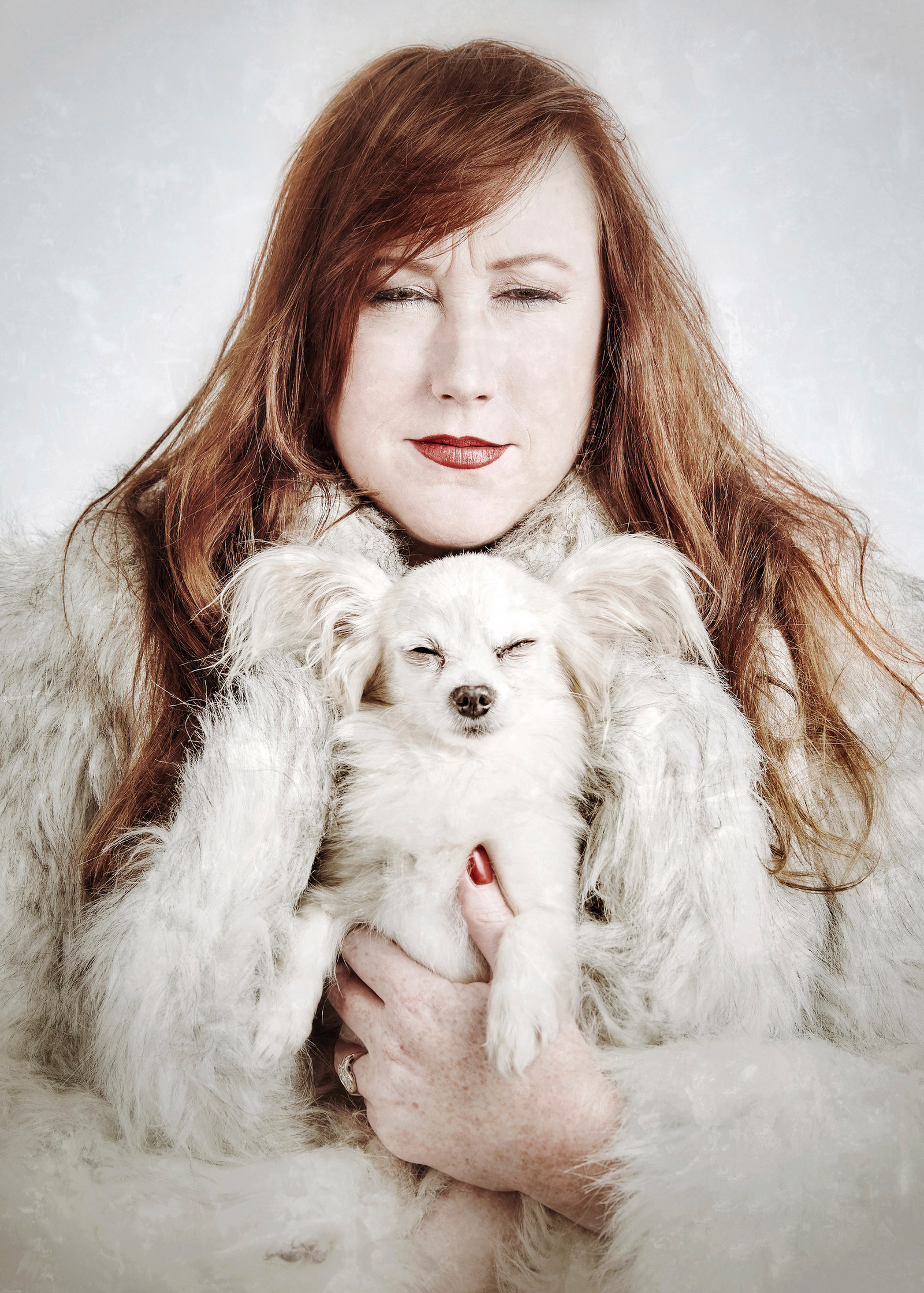 Rachel poses with her chihuahua, Gucci. “As a redhead, I have never blended in, and this shoot was such a fantastic way to showcase what makes me and other ginger kids special,” she told The Redhead Project.

Barraclough and Lorenz have started doing casting calls when he happens to be in new cities for work. The only requirement is that the subject has to be a natural-born redhead, whether they dye it now or not. People fill out applications to take part, and then the collaboration begins.

Each shoot must start, however, with a simple shot of the person wearing white in front of plain white background.

It’s not an easy sell.

"There are times where it's dead silence on the other side of the phone and you can almost hear a pin drop,” Barraclough said. “And then they say: ‘Ugh, I look awful in white. I'm a redhead, we have pale skin. I never wear white.’ And I say just wear white, you'll love it, trust me.” 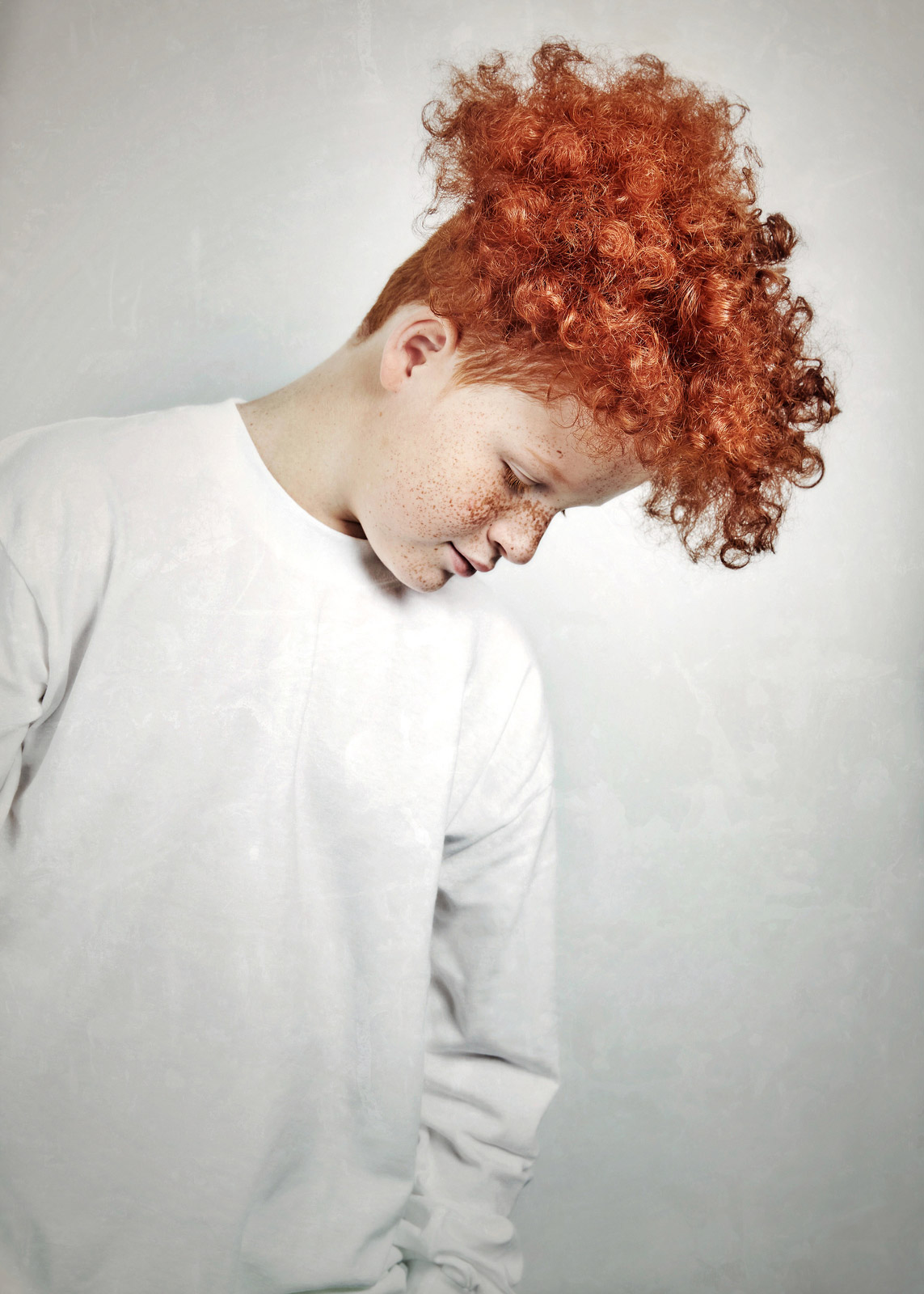 “Throughout his whole life, we’ve had to deal with strangers always touching his hair,” Nigel’s mother told The Redhead Project. When he was 2, she remembers him crying when two elderly women were running their hands through his hair at a restaurant. “Now that he’s older, people will at least ask first.” 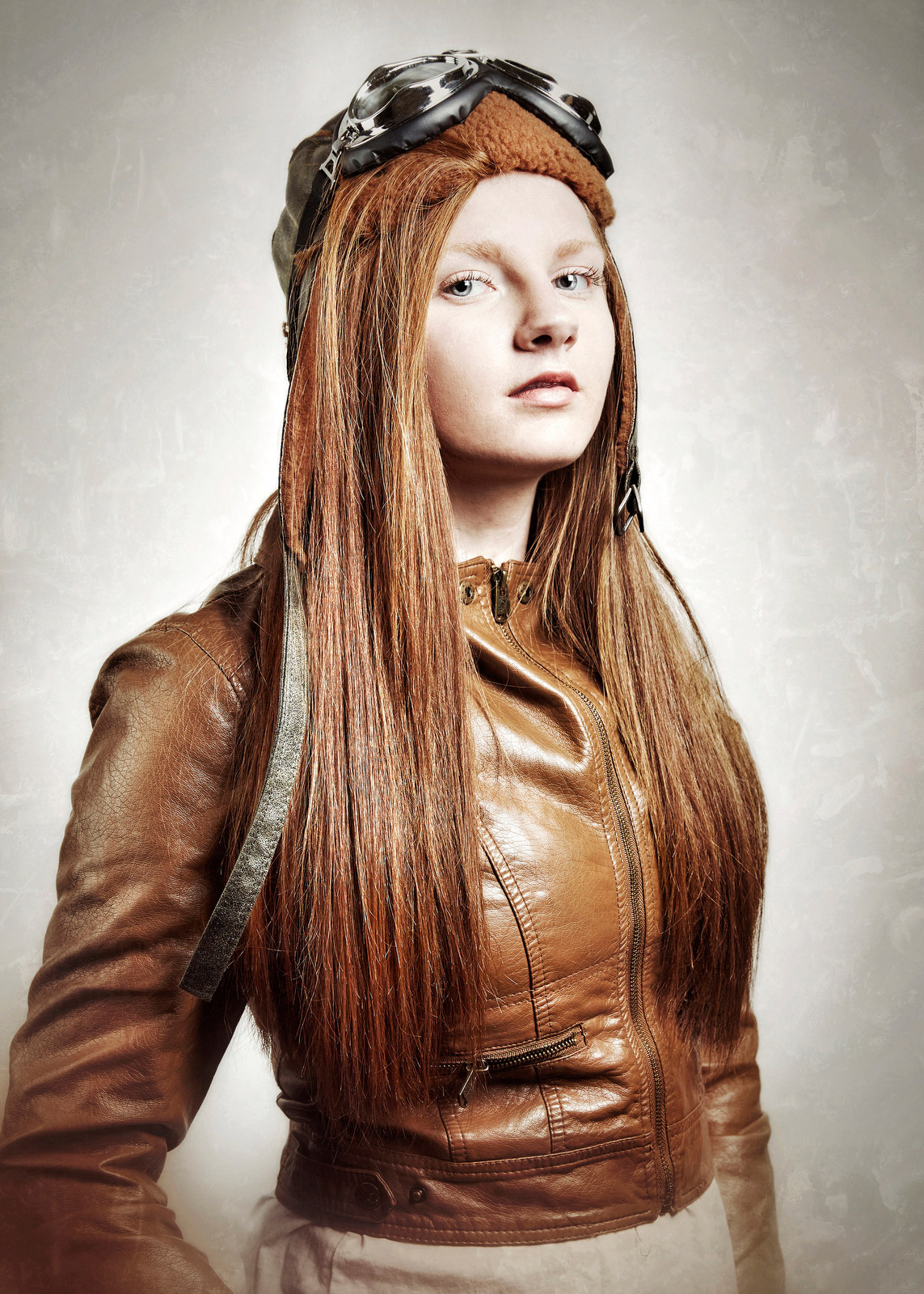 Gabrielle fell in love with flying when she was a child growing up near a naval air base. Now she’s working on getting an electrical engineering degree, and she plans on eventually getting a pilot’s license. 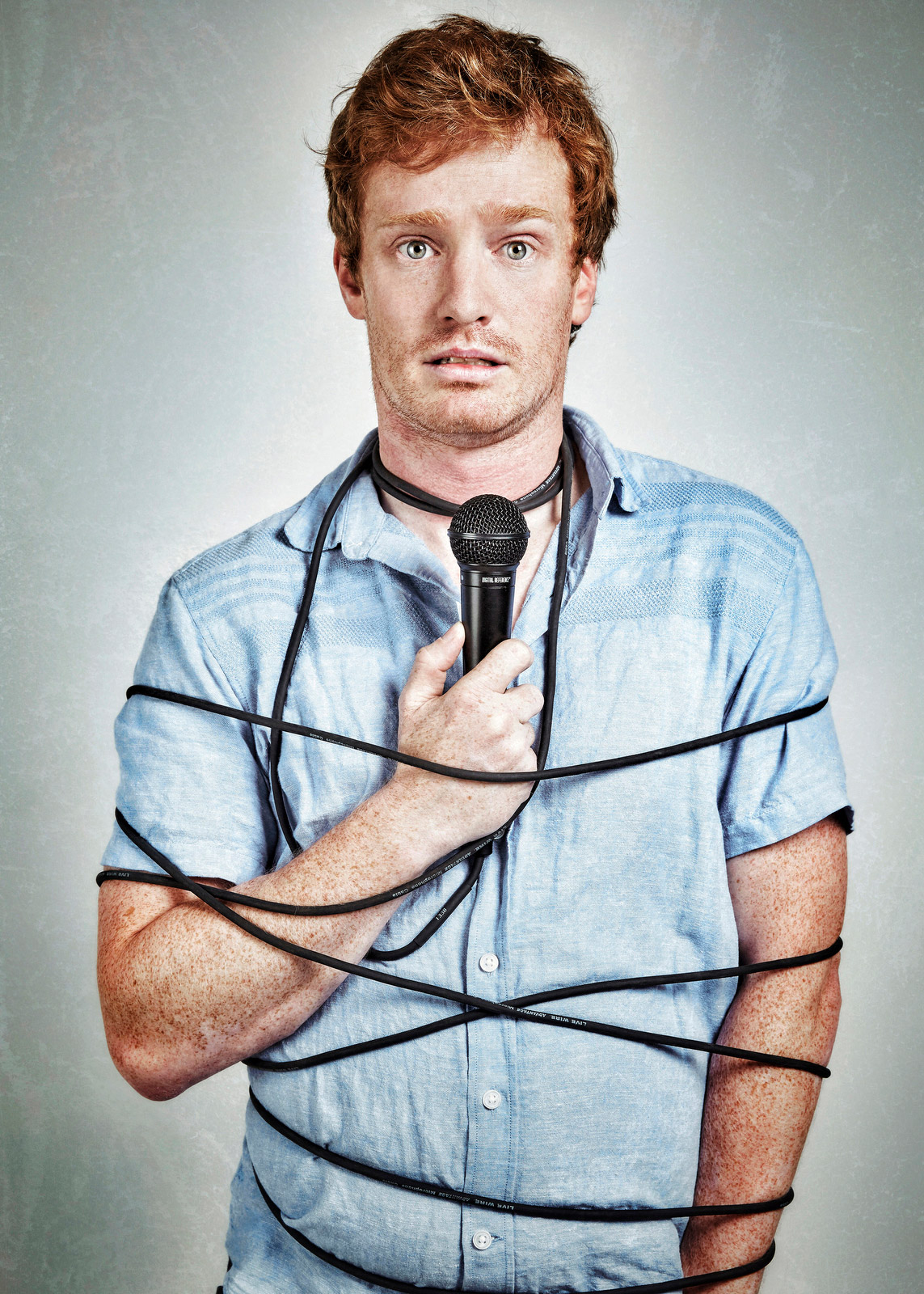 Frank is a standup comedian. He said this photo “captures the never-ending thoughts comedians try to untangle, how I’m wrapped in the craft of standup and how the court jester lives precariously close to being silenced by power … or in this case, a power cord.” 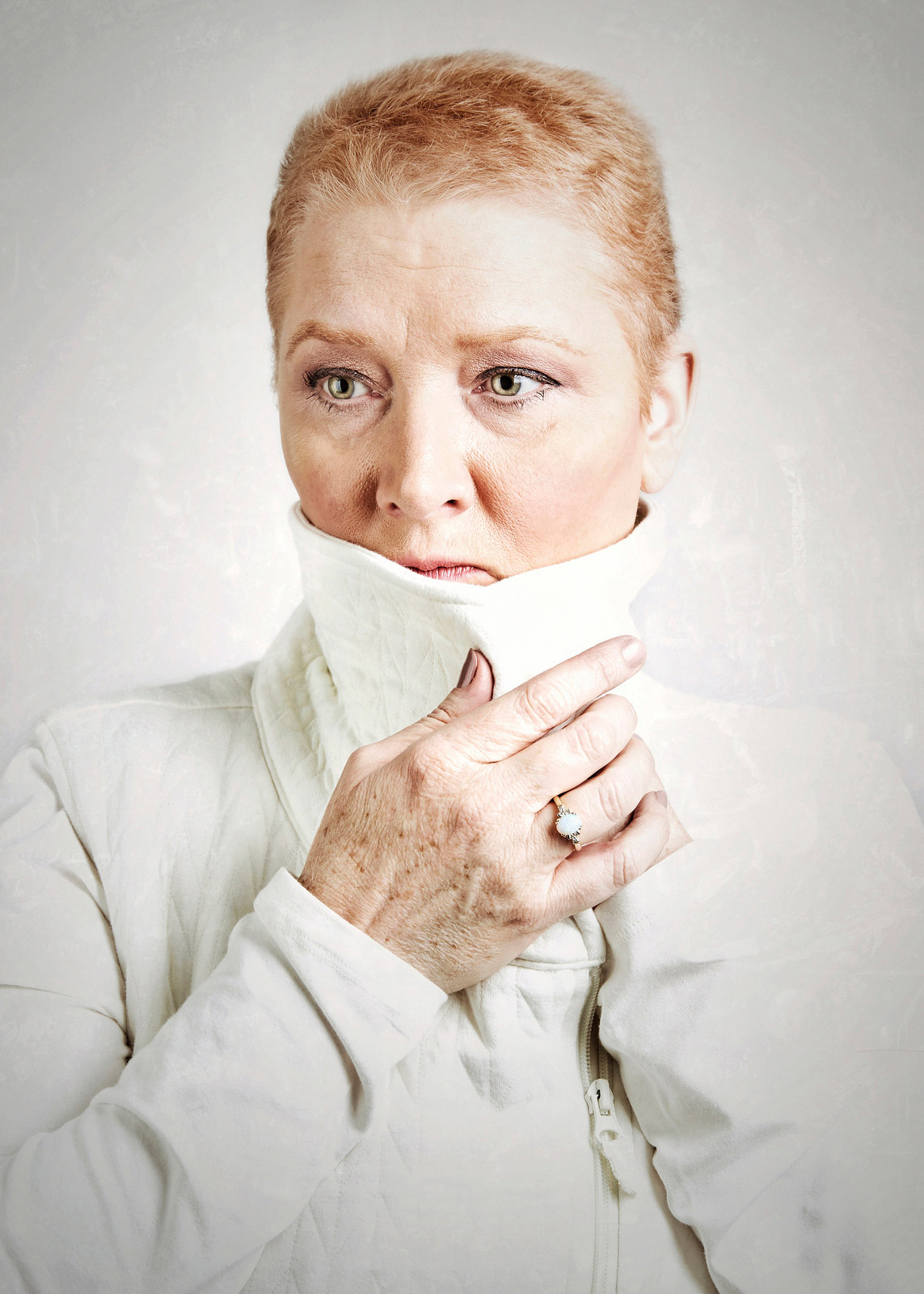 Camille had recently finished chemotherapy when she posed for The Redhead Project in 2017. She was worried whether her hair would come back and what it would look like. “Well, it did grow back — a little bit lighter shade of red, with softer curls than I had before, and thinner,” she said. She is still fighting cancer today. 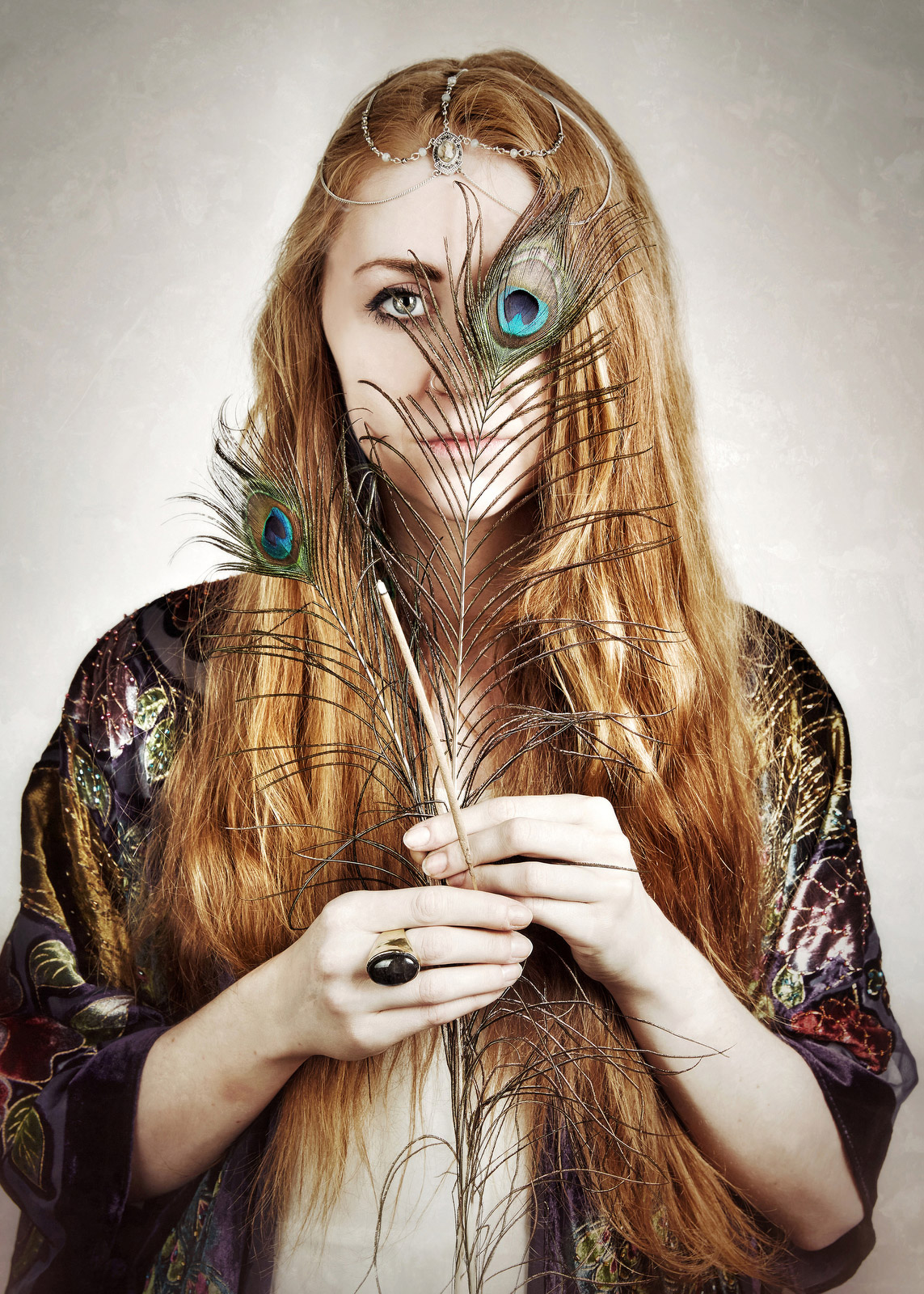 Tigony holds peacock feathers. “I have always been a bit of a mystic and interested in fortune-telling,” she told The Redhead Project. 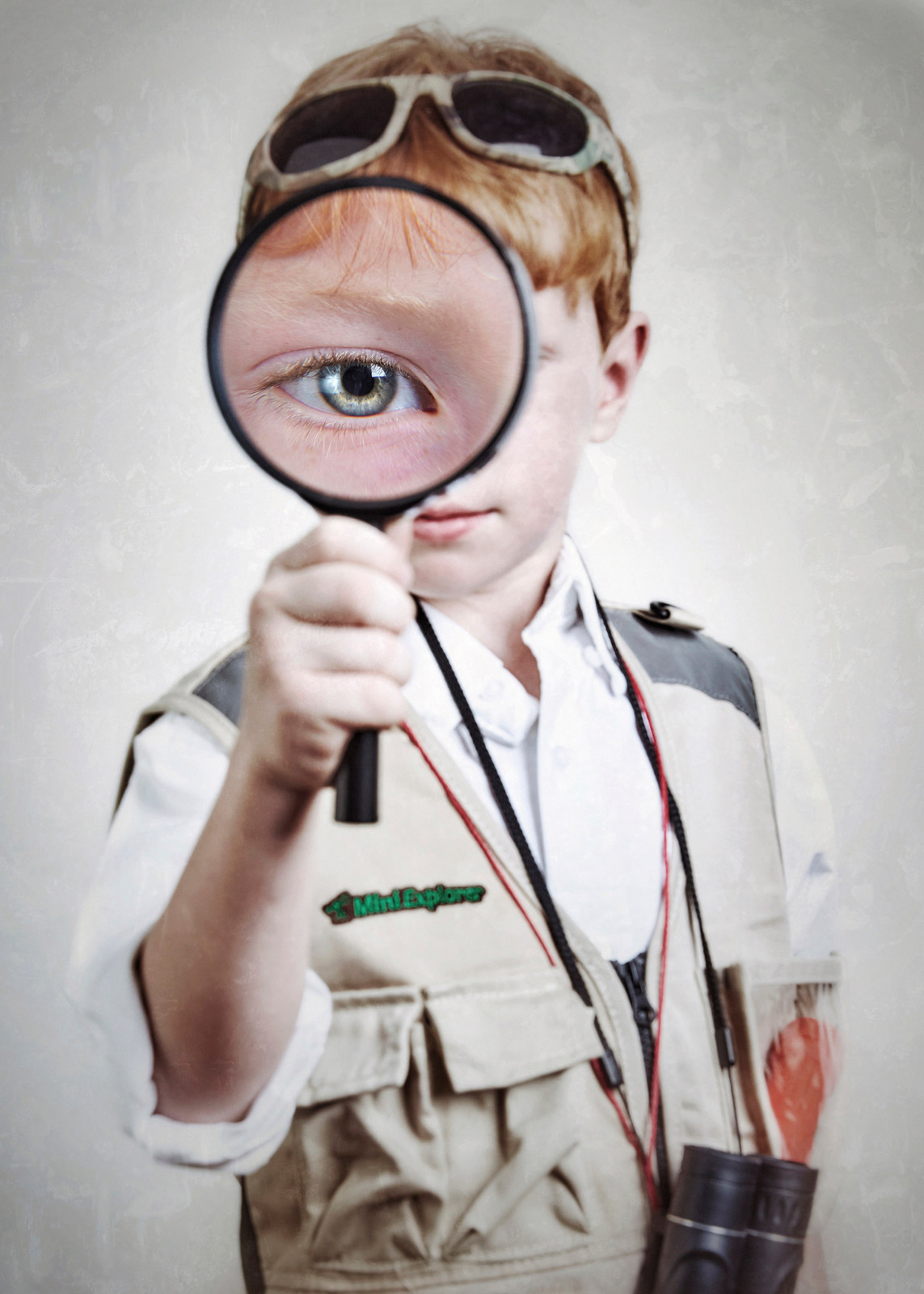 Parker is an explorer who loves to dig in the dirt, his mom says.

That first picture acts as a blank slate that they work to fill in later with each person’s personality. Barraclough says he likes it when viewers are surprised by what they see next.

As for the subjects, they participate for all sorts of reasons.

Maybe they were teased as a kid and want to show the world how proud they are of their red hair. Maybe cancer once took away their locks and now they want to show them off again. Some just like the playfulness of the whole thing. And how often do you get a chance to take part in a free professional photo shoot?

“I get the sense that people like to celebrate both their hair and their personalities,” Lorenz said. “To show people that, you know, I'm actually something beyond my red hair. I am a statistic, but I'm also an interesting person aside from the hair.” 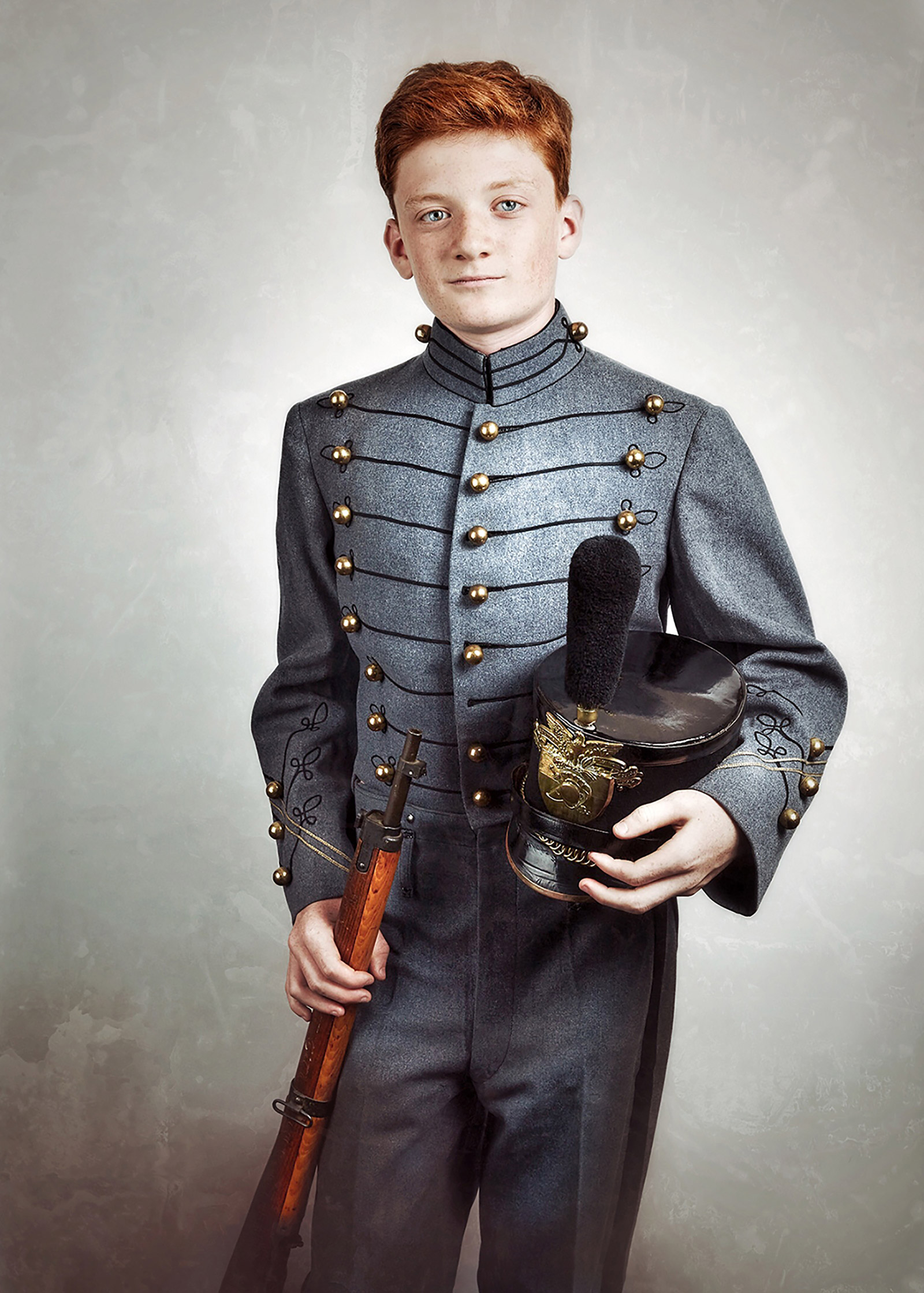 Tommy wears a cadet uniform from the 1940s. He grew up with a love of military history.

"We've gotten emails from Tampa, from Alabama,” Barraclough said. “This lady in Tampa had triplets and said: ‘I want to I want to be part of this project. I know you're not coming to Tampa but we'll drive five and a half hours to come see you.’ ”

Barraclough remembers how one family in Texas drove 10-11 hours just to take part in a photo shoot and then head back home.

“That's what keeps us going,” he said. “When we first started it we said, ‘Hey, let's just go for a year and see how many redheads we get.’ And we keep going because people are so enthused about it. It just amazes me.”