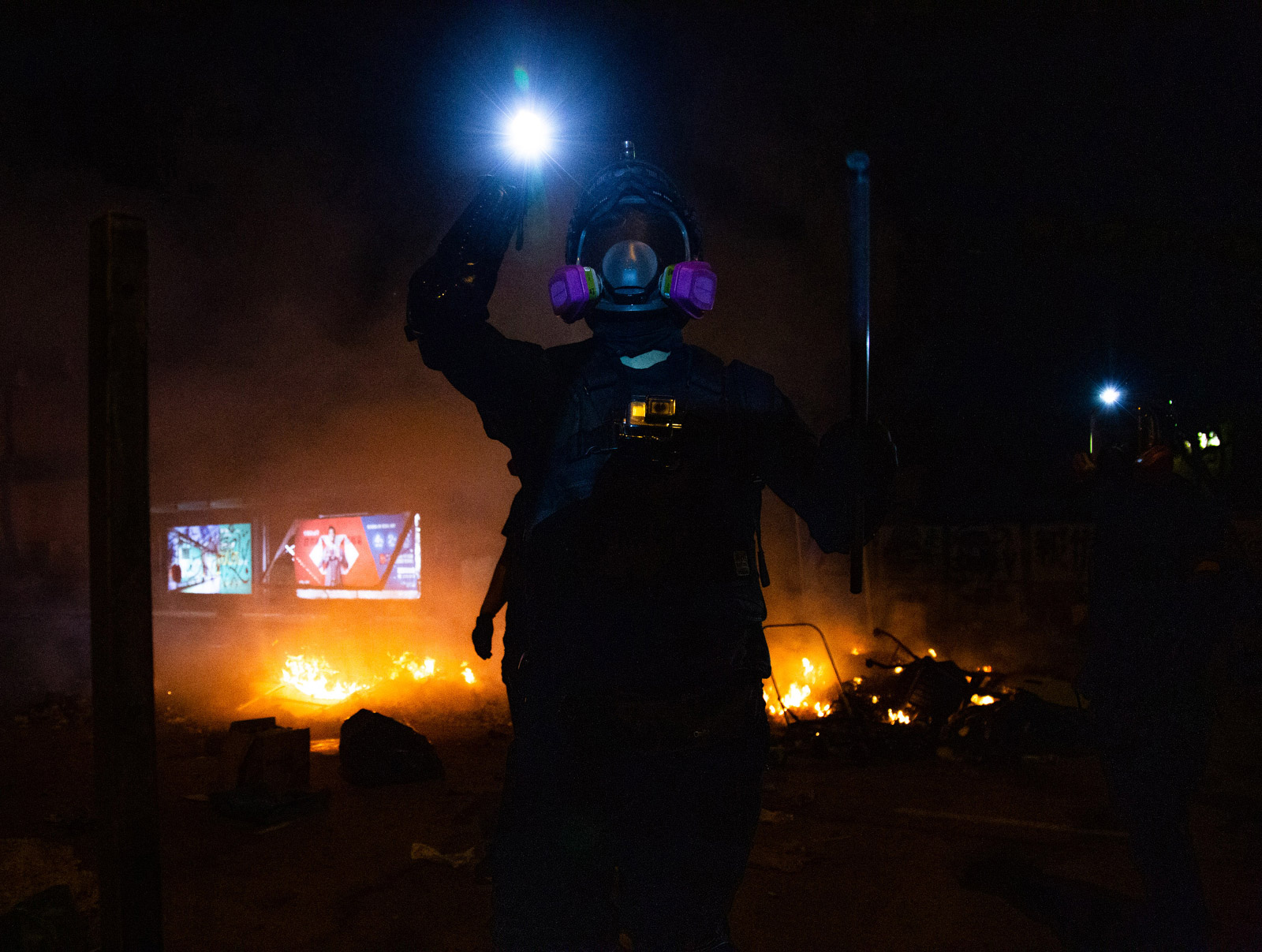 A protester stands in front of a fire Saturday near the entrance of Hong Kong Polytechnic University.

Inside the Hong Kong campus standoff

A protester stands in front of a fire Saturday near the entrance of Hong Kong Polytechnic University.

Even before this weekend’s violence, Betsy Joles could feel something different about the anti-government protests in Hong Kong.

Especially on the college campuses that have turned into fortified protest camps.

“I think people are getting bolder,” Joles said Monday. “I felt this jagged edge to the young people last week at (the Chinese University of Hong Kong), like they'd dissociated a little from what was going on, with a willingness for violence that I wasn't expecting. Things feel more unhinged.” 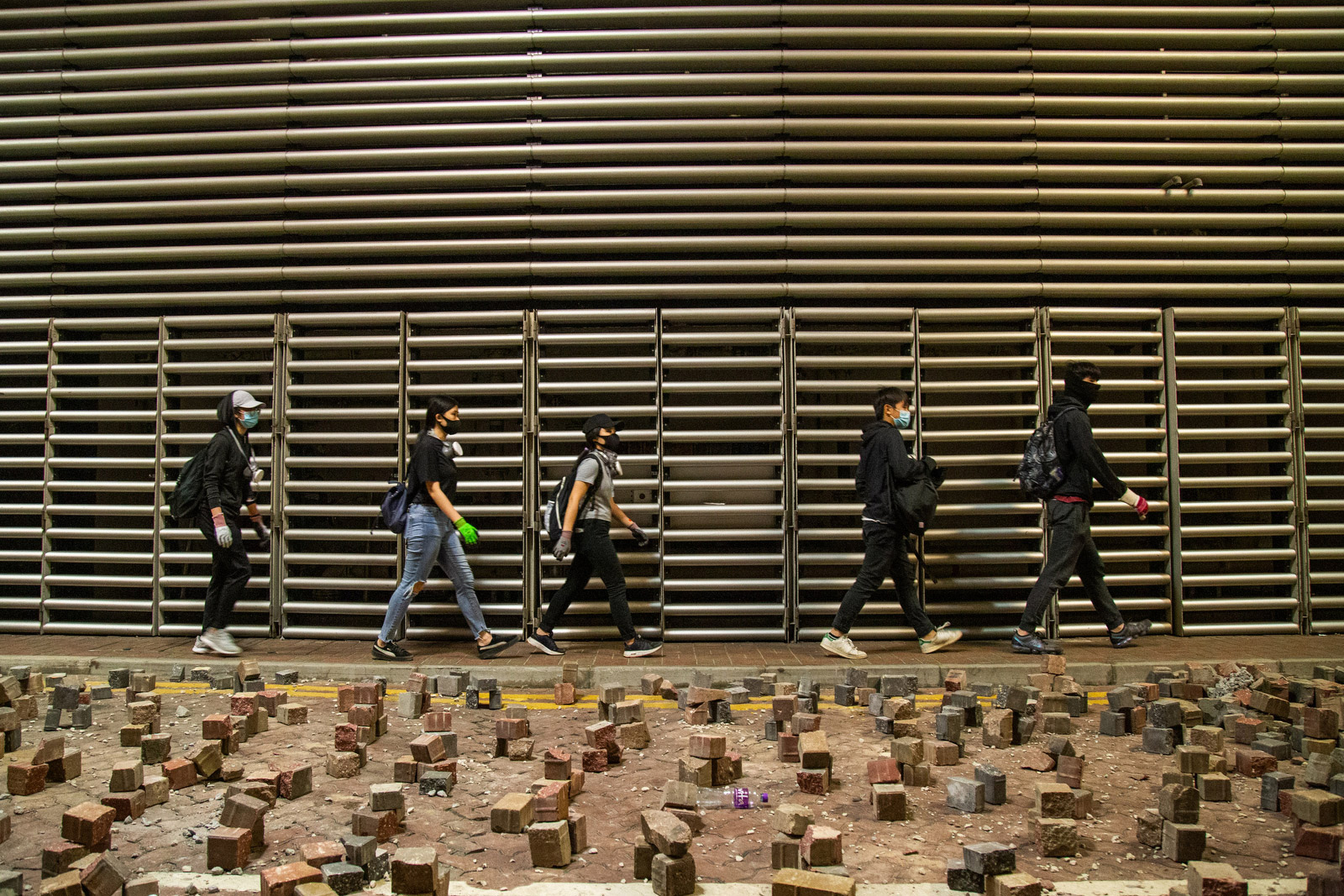 Protesters set up bricks on Thursday to block university roads. 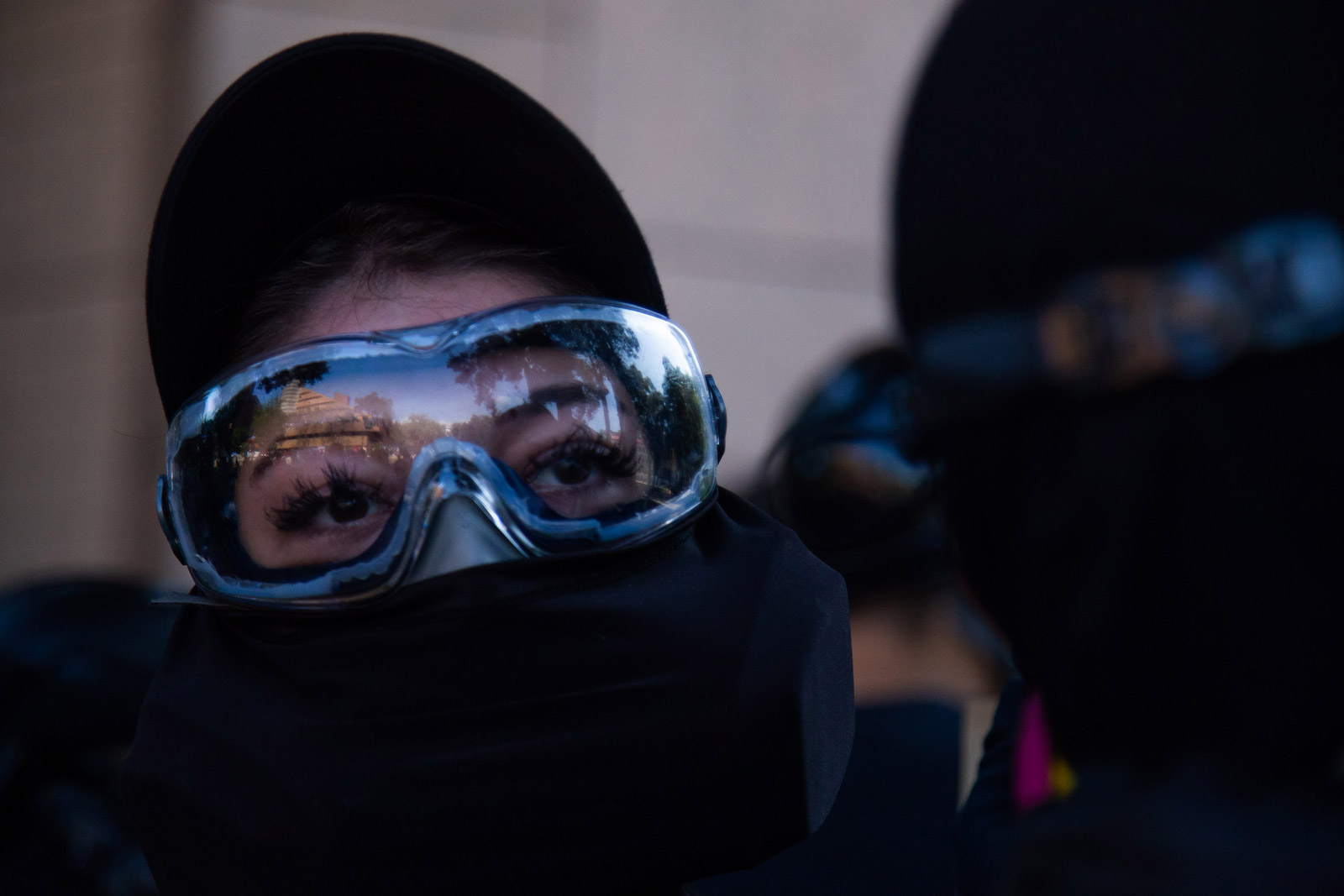 A protester is seen on the front line of clashes Sunday.

This weekend Joles was on the campus of Hong Kong Polytechnic University, where protesters have been engaged in a prolonged battle with police. It has been some of the worst fighting since the demonstrations began nearly six months ago.

Joles started photographing “PolyU” last week. Her photos show what life is like inside the massive campus: Stacks of food and other stockpiled supplies. A fully functioning kitchen and cafeteria. Screens showing live streaming video of the protests and the fighting outside. 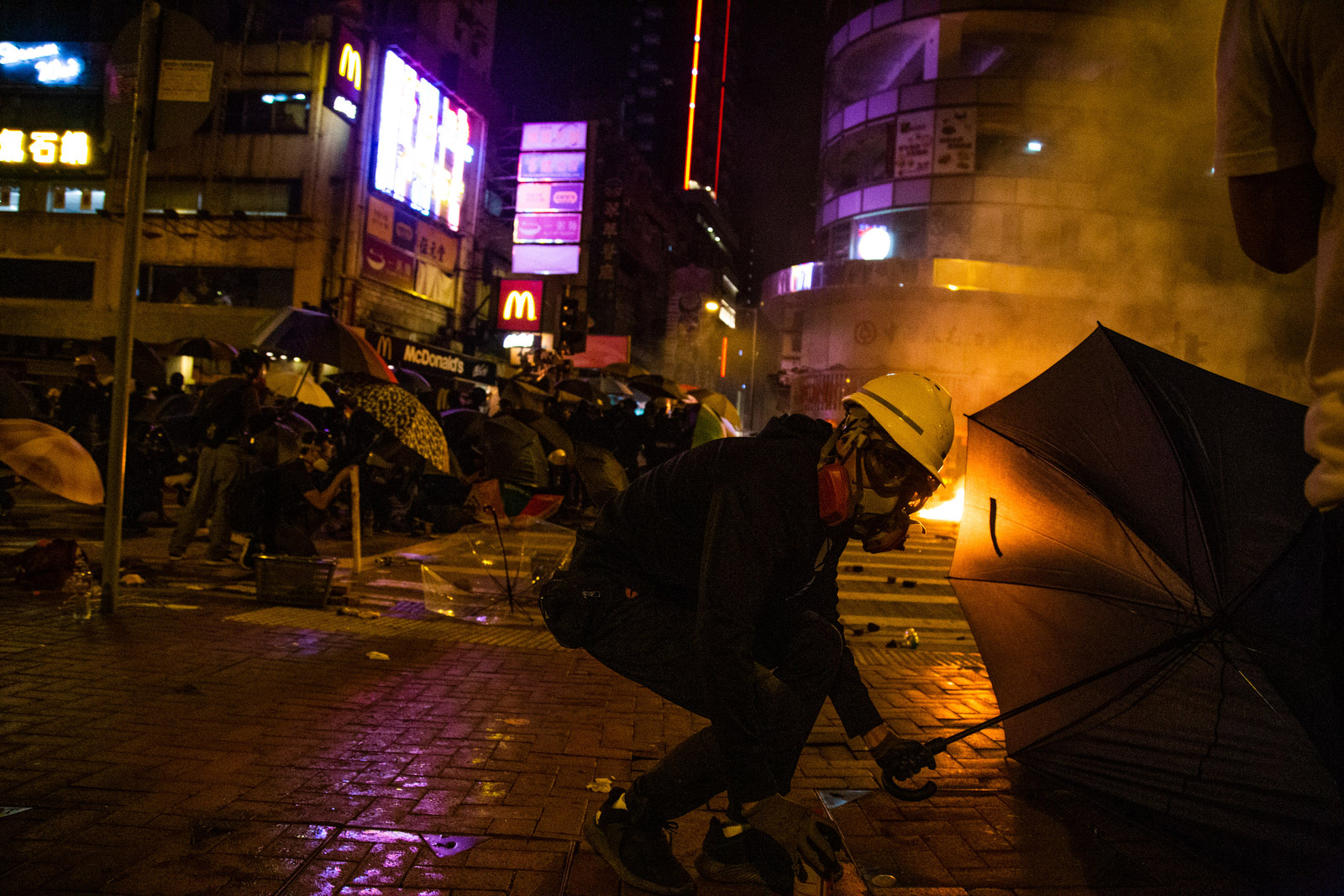 Protesters and police face off near the university on Monday morning. 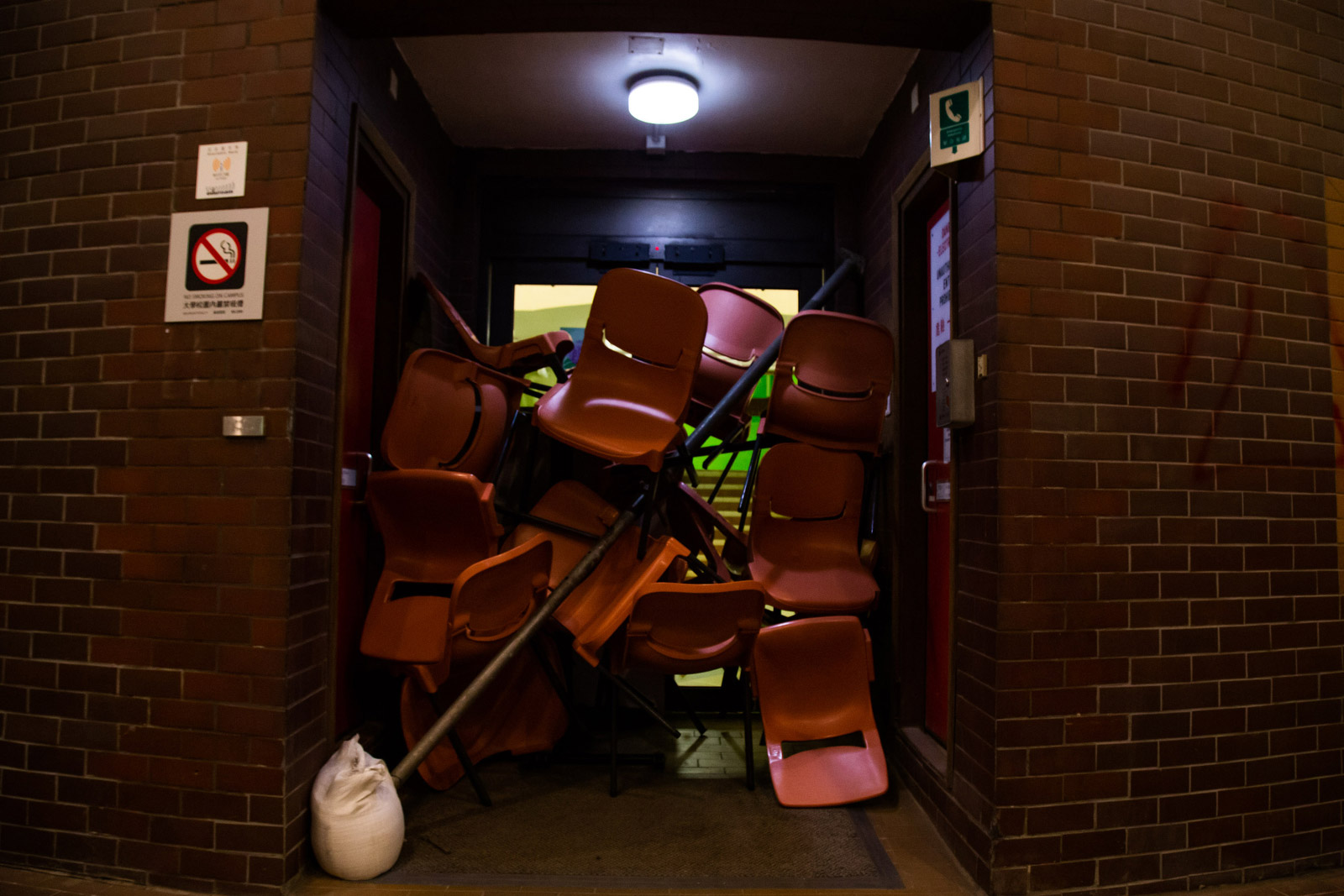 Chairs block a doorway at the university.

She has talked to many of the young protesters to understand where they are coming from.

“It feels like I have to pry a little more to get to the root of how they feel and why they are here — second to the slogans shared on social media,” she explained. “There's a pureness to some of the answers. Like when I asked Henry, one college student I met at the protest, if he was coming back again the next night, and he said no because he had a date.” 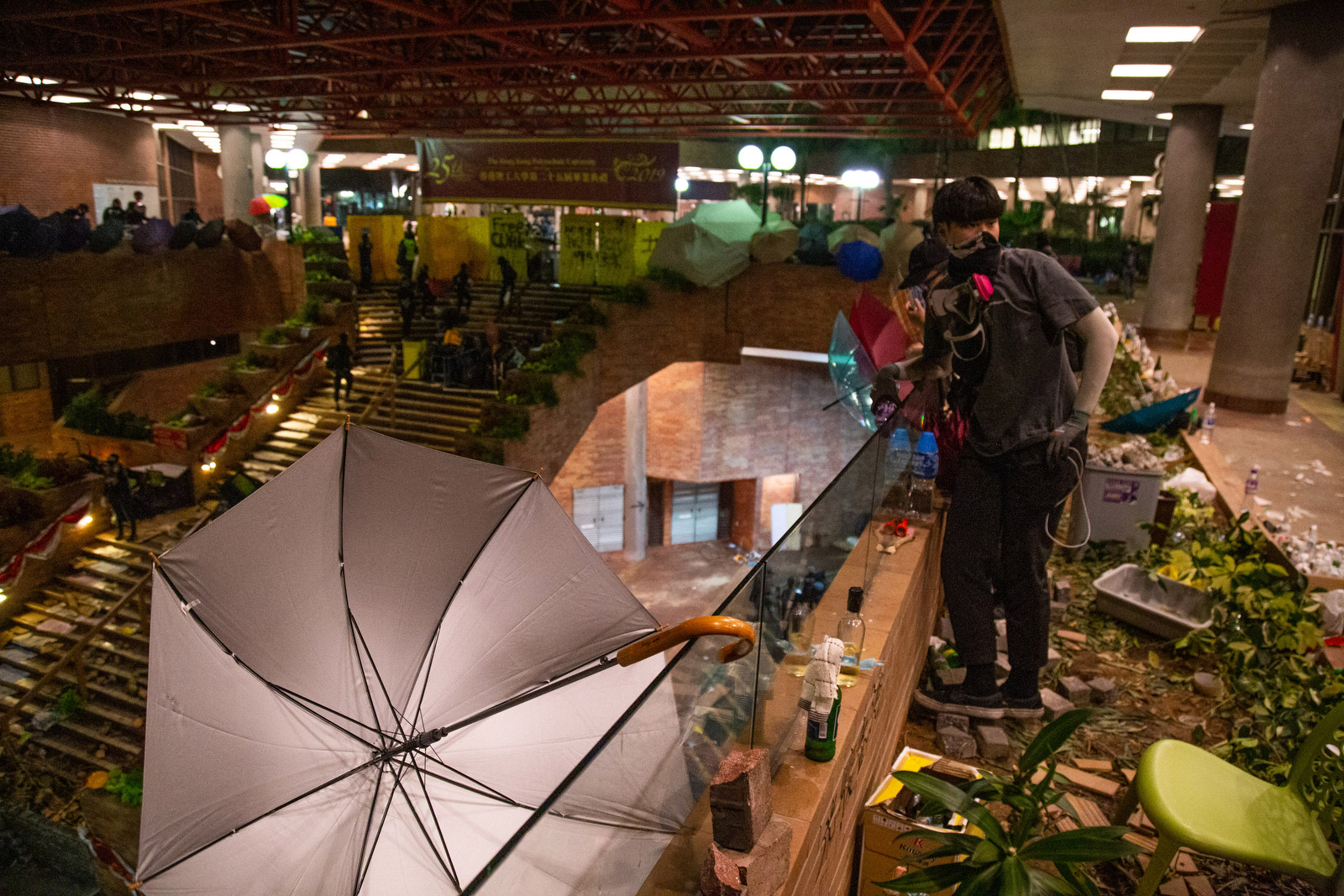 Protesters stand Thursday at the entrance of PolyU, where they created a security check for people entering the campus. 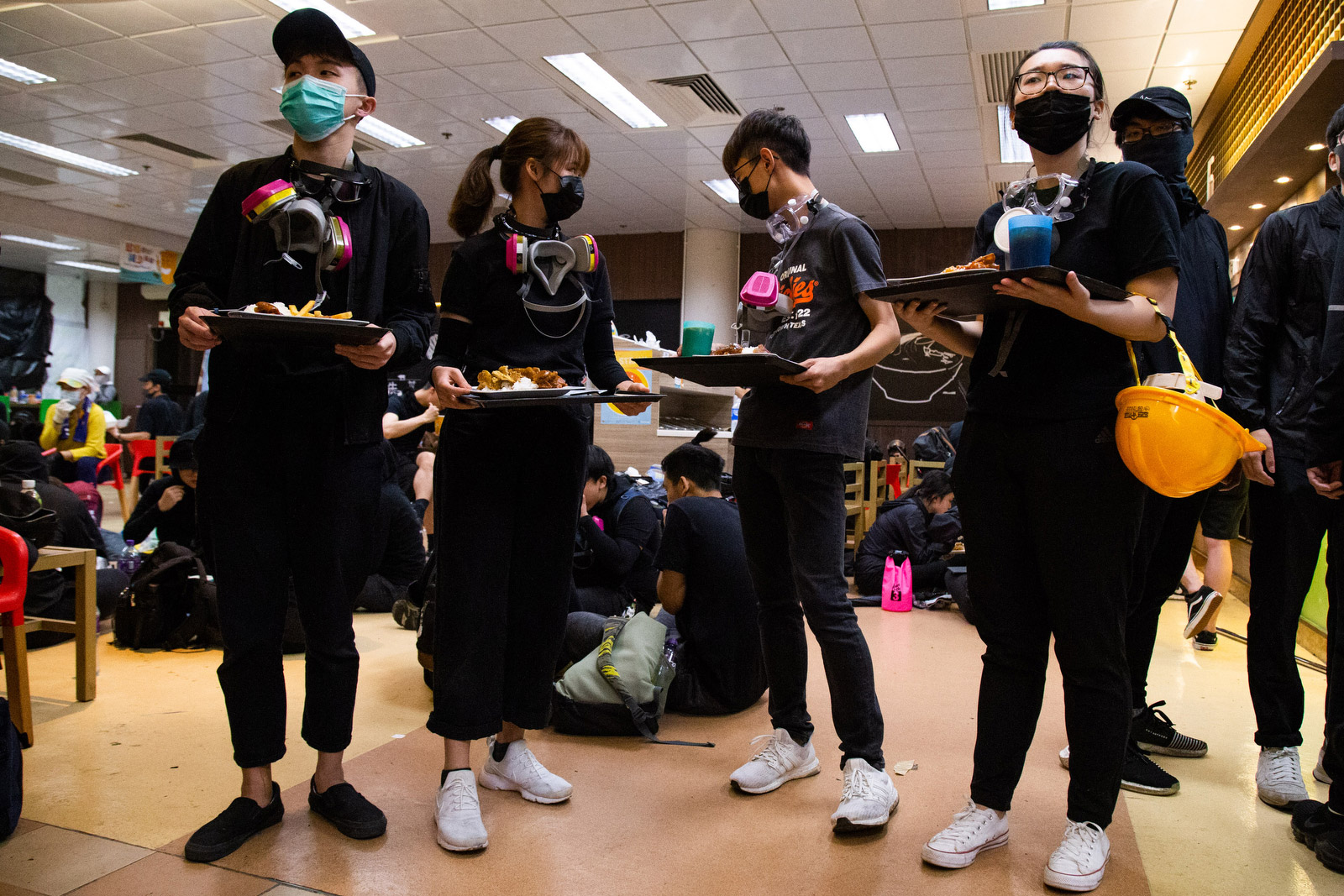 Protesters eat instant noodles and other foods prepared in the kitchen of PolyU’s canteen. It became a gathering area and storage space for protest supplies.

One social worker told Joles about a 15-year-old whose parents came looking for her inside. They wrote their daughter a letter saying they care about her, but instead of taking her back home, they let her decide whether she wanted to stay.

Some students haven’t told their parents they are protesting. Joles talked to one young man who told his parents he was doing a school project with a friend. 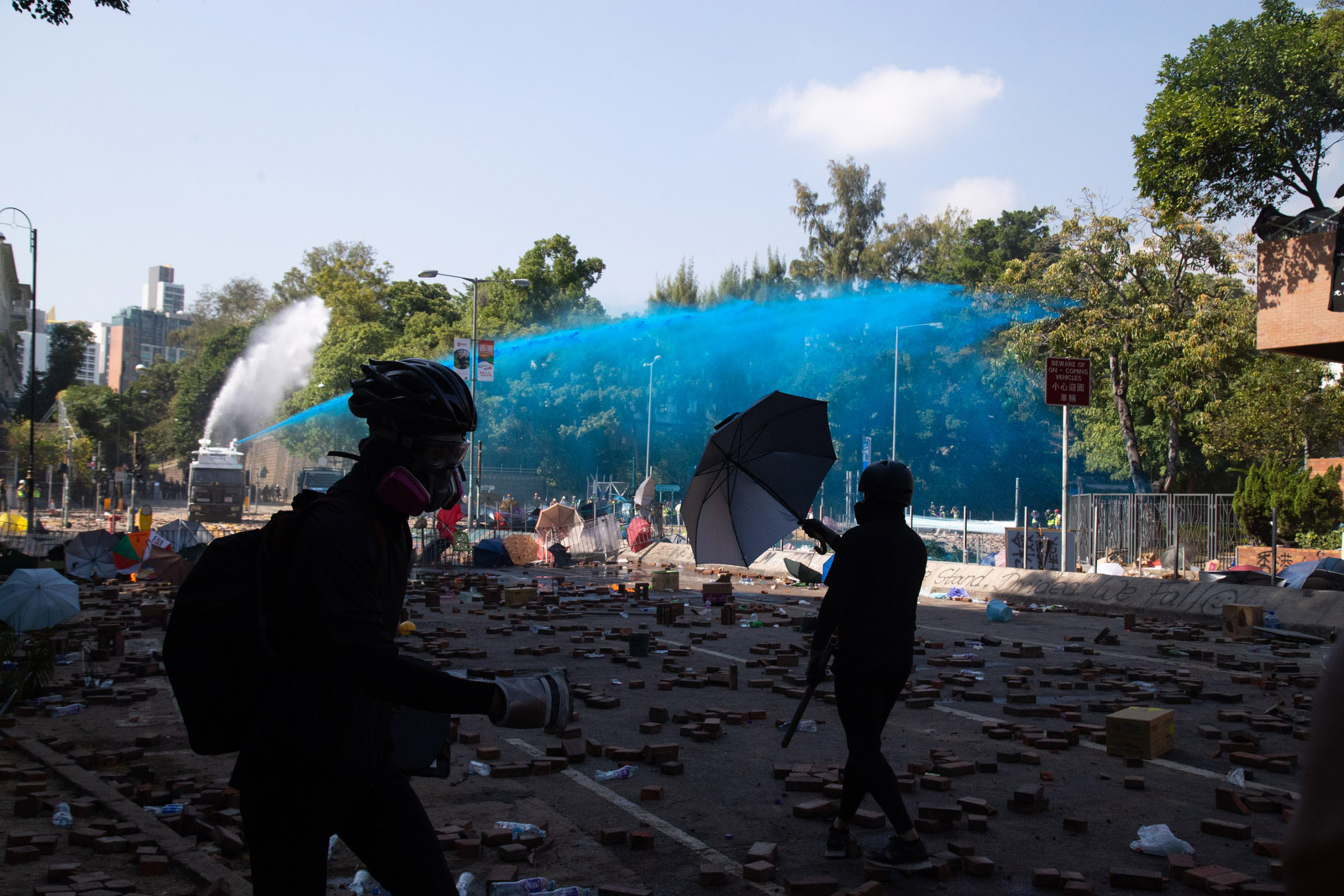 A protester holds an umbrella as police spray water at a crowd on Sunday. 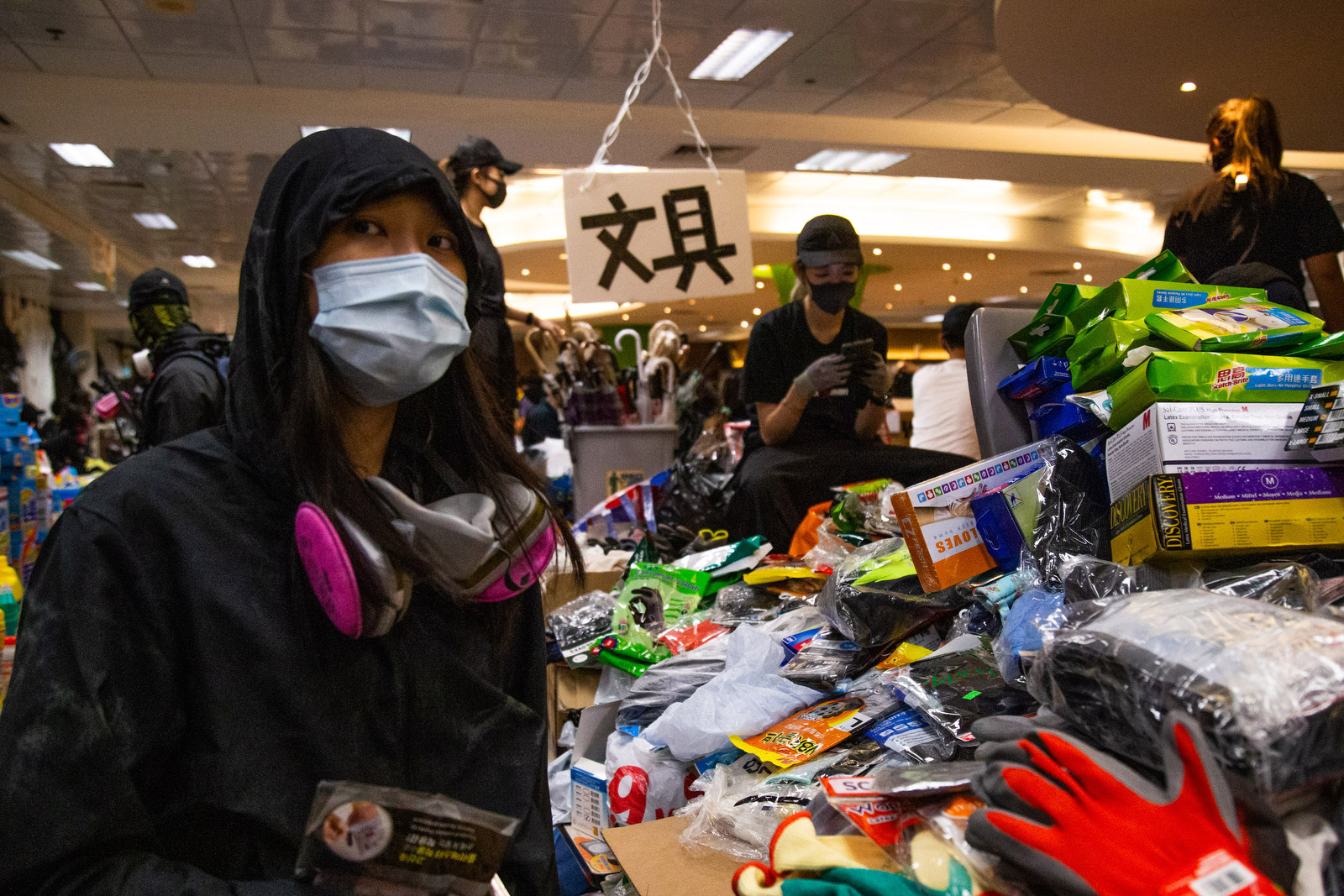 Protesters stockpile food inside the school’s canteen, along with other supplies like soap and clothes. When CNN visited the campus on Friday, it also saw stockpiled petrol bombs and other weapons.

Joles is fascinated by how people are balancing the protests with their daily lives.

“Even within fights for big ideals like democracy and autonomy, which are themselves loaded with questions, you still have to maintain those daily relations, which are sometimes even harder-fought — especially with people you love,” she said. 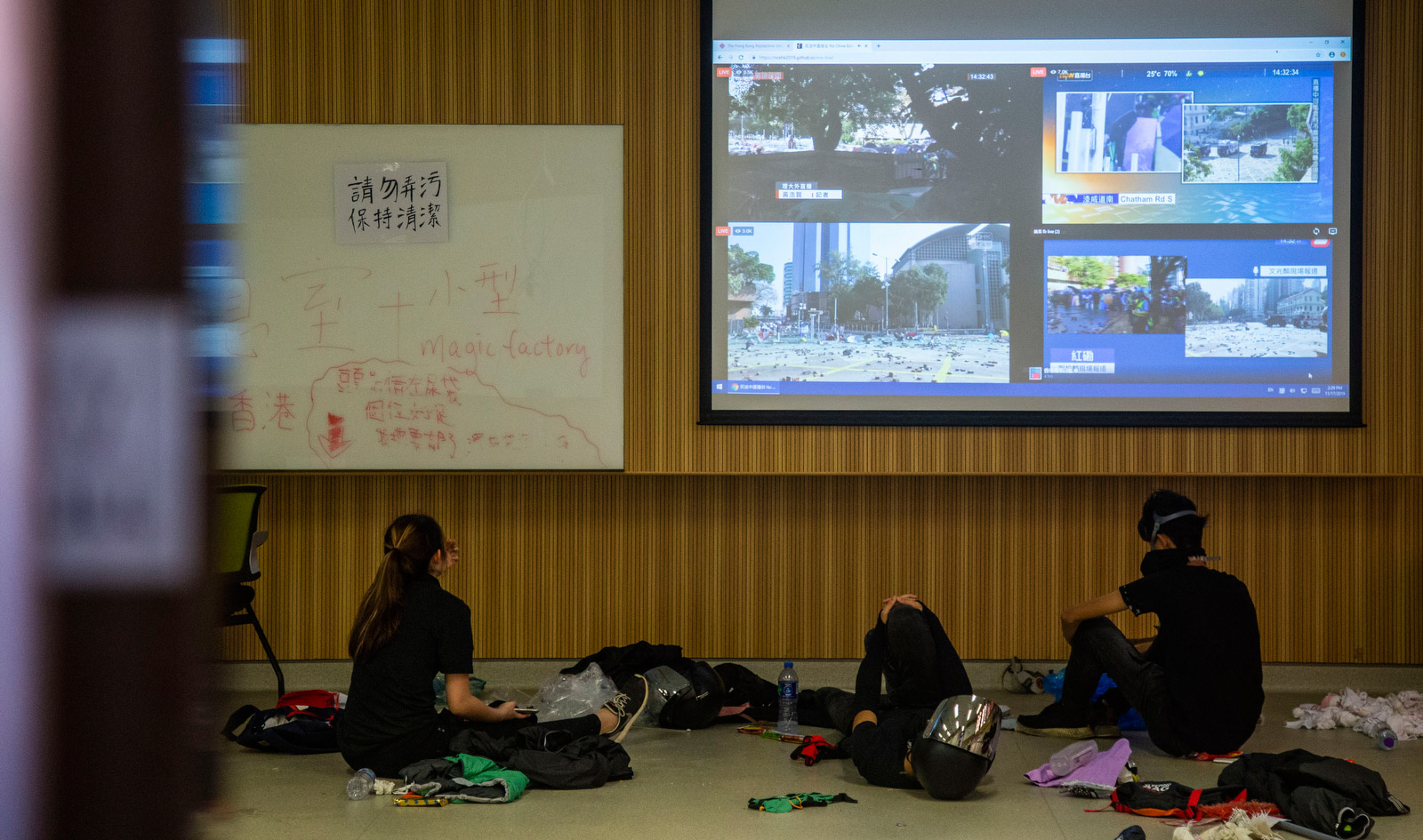 Protesters watch livestreams of the protests on Sunday. This room inside the university was also used as a first-aid station. 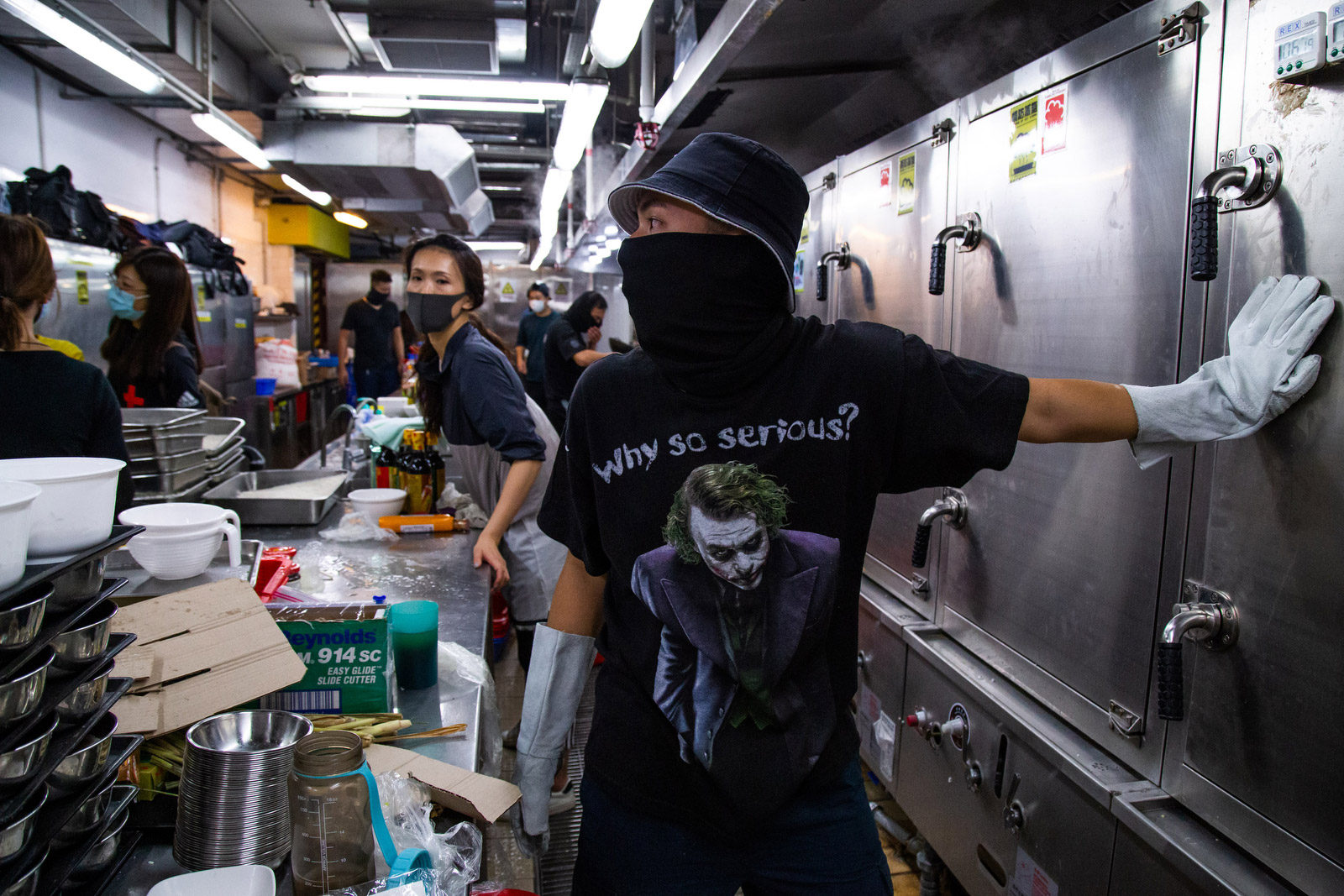 Students and other volunteers set up a fully functioning kitchen inside the university’s canteen on Thursday.

Protesters have occupied PolyU since early Thursday, and police have been trying to clear them since Sunday morning. By Monday evening, a small group — between 100 to 1,000 protesters — were still inside.

The campus is in the center of the city, close to a number of major roads including the Cross Harbor Tunnel that connects Kowloon to Hong Kong Island. That tunnel remained closed to the public on Monday. 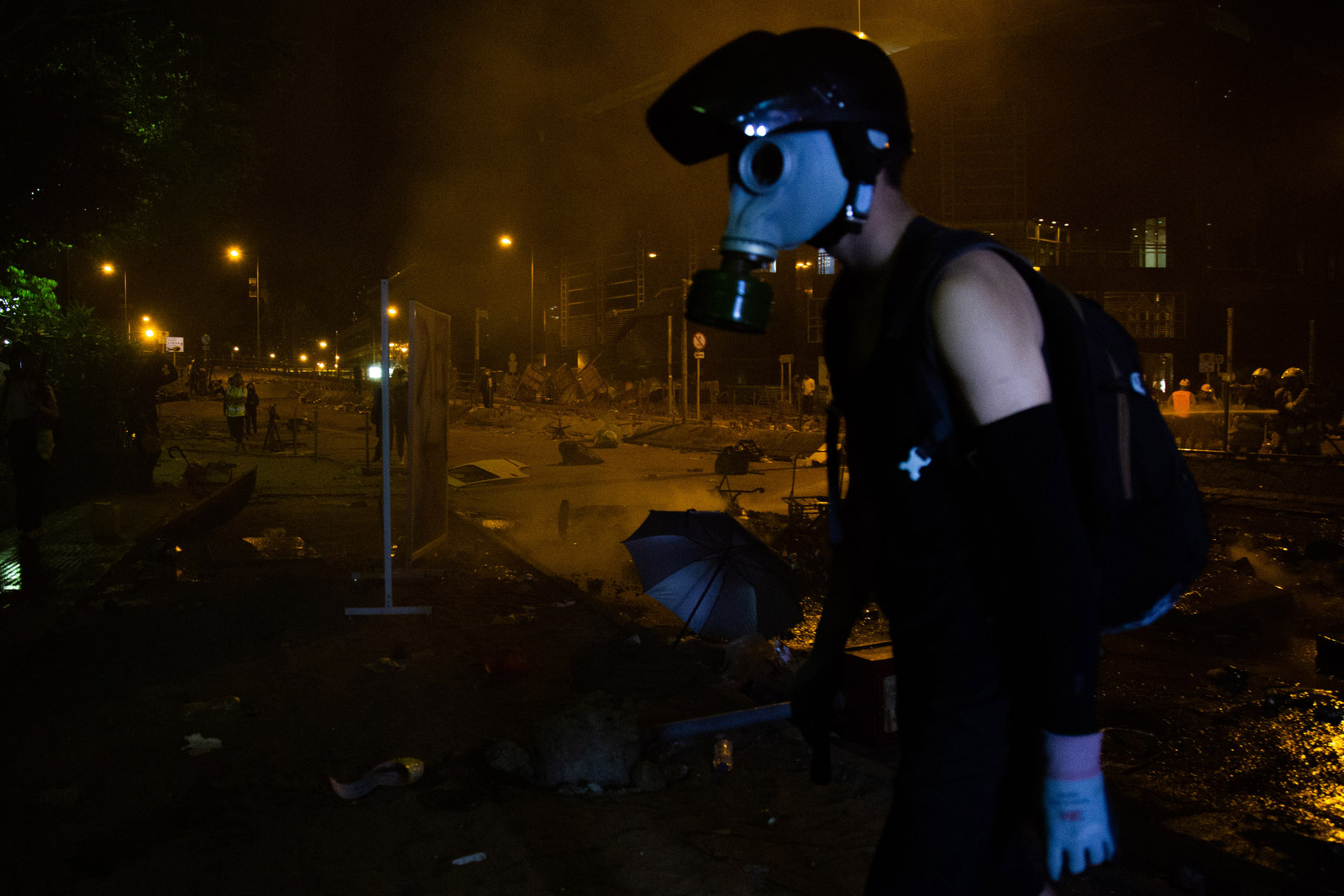 A protester walks through smoke Saturday in front of the university.