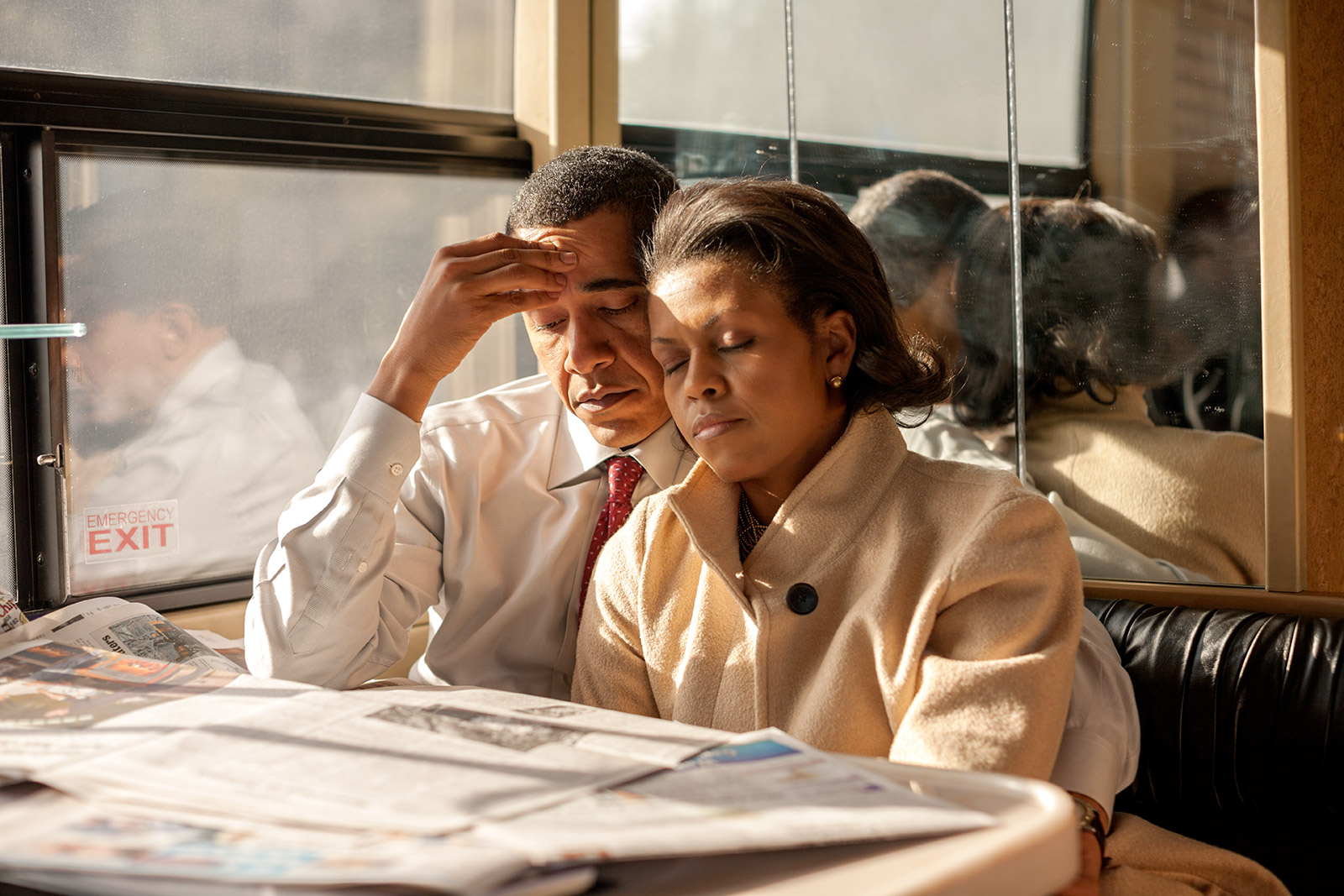 Barack and Michelle Obama have a quiet moment together on a campaign bus in January 2008. They had been campaigning separately all week, and it was a rare chance for them to spend some time together.

Barack and Michelle Obama have a quiet moment together on a campaign bus in January 2008. They had been campaigning separately all week, and it was a rare chance for them to spend some time together.

It was April 2004, and photographer Callie Shell had just covered a campaign rally for presidential candidate John Kerry.

But it was a different politician that left an impression that day in Chicago: a young state senator named Barack Obama.

“When he walked out to introduce Kerry, the excitement for him was much higher,” Shell remembers. “People were really excited to see him.”

Shell was intrigued by the buzz behind this relative unknown who was running for the US Senate but hadn’t made an impact yet nationally. She was also impressed by the way he could work a room, crack jokes and make everyone feel comfortable, whether it was the Secret Service, the janitors or the union workers in attendance. 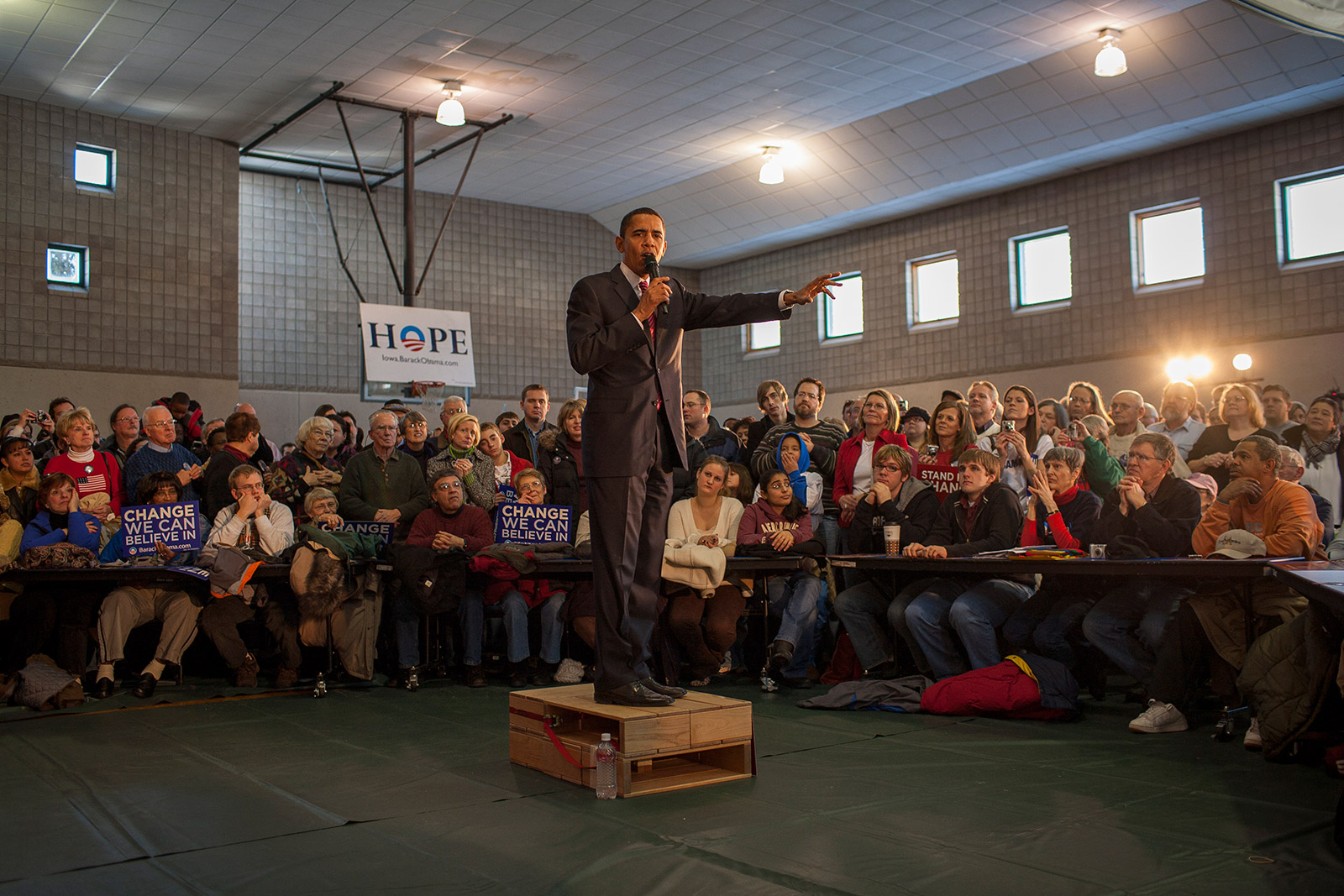 Obama speaks at a town-hall meeting in Davenport, Iowa, in January 2008. His staff found a wooden crate and turned it into a stage, photographer Callie Shell said.

Shell’s editor at Time magazine joked about how many photos she had taken that day of Obama. But Shell knew he was destined for more.

She told her editor the same thing she told her husband: This guy is going to run for president someday.

For the next 15 years, Shell would go on to take thousands of photos of Obama and his family, chronicling their stratospheric rise to the White House.

And she was given access that very few photographers had. 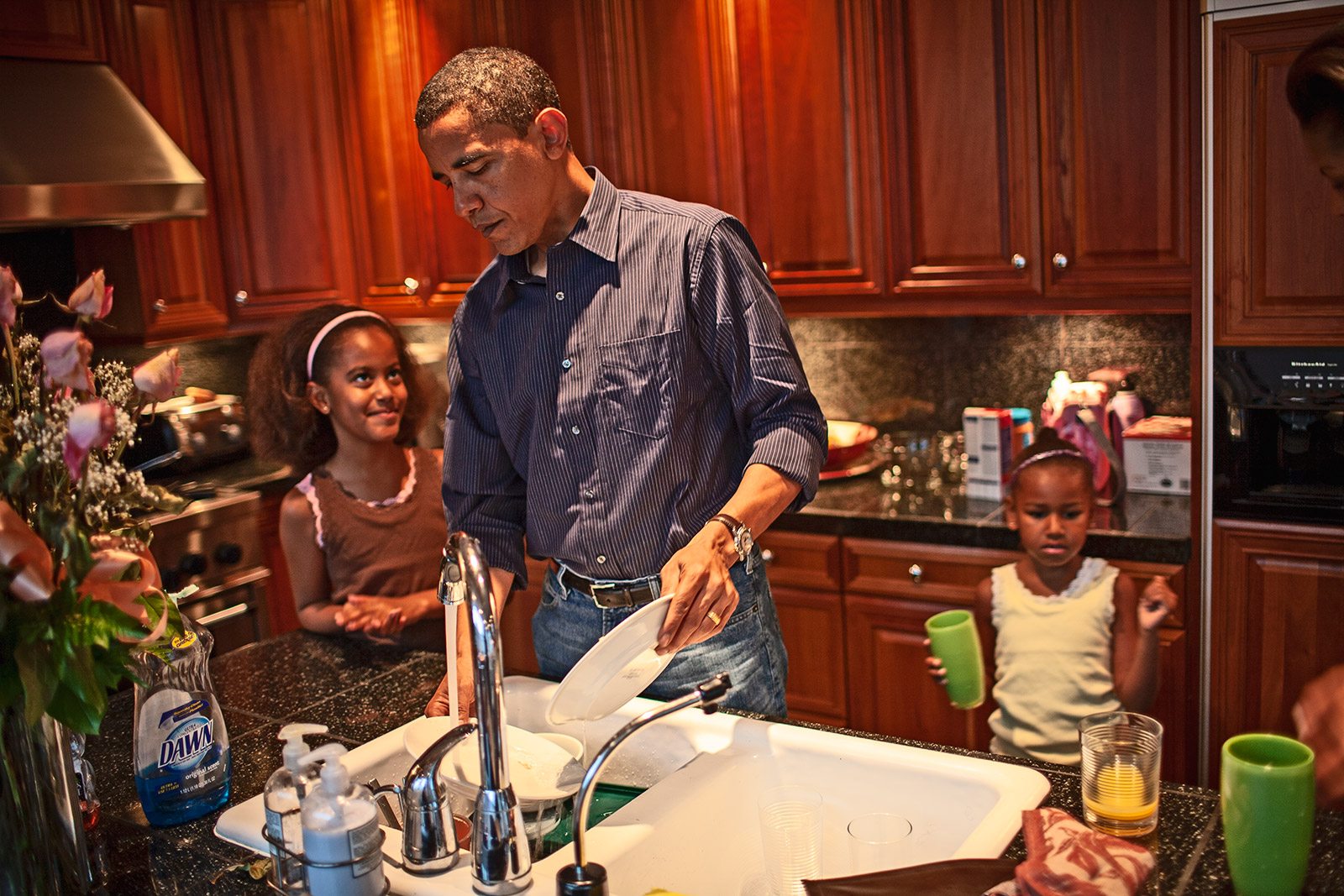 Obama washes dishes after he and his daughters, Malia and Sasha, had breakfast together at their home in Chicago in October 2006. “My favorite thing when I go home is breakfast with the kids and taking them to school,” he told Shell back then.

Shell spent time with the family at their home in Chicago. She was with them on the campaign bus. She was there backstage at Obama’s inauguration. And she continued photographing them at the White House.

Her most intimate photos are compiled in a new book, “Hope, Never Fear: A Personal Portrait of the Obamas.” It includes more than 100 images of Barack and Michelle Obama, many of which were taken behind the scenes and have never been published before.

“I think it's really important for people to see the journey it took for them to get to the White House — what they were like before they were rock stars, when they were sleeping on buses and there weren't hundreds of staff people around and Secret Service,” Shell said. 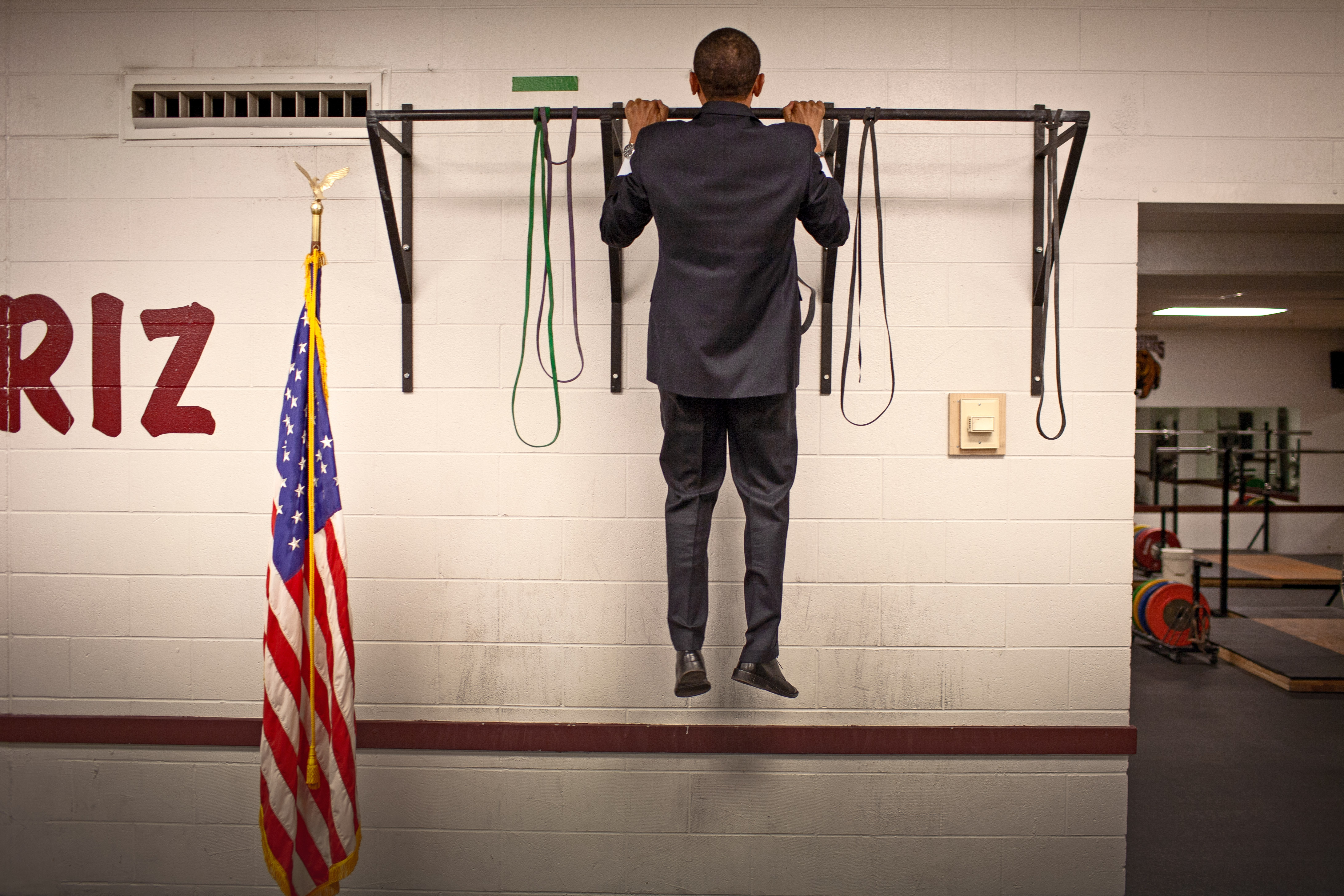 Obama does pullups backstage before delivering a speech on the campaign trail.

“In between rallies when we were waiting to be introduced or waiting to go on, (Obama) always had this excess energy,” Shell said.

Two staff members had just taken a stab at pullups. One of them did a single pullup. The next did two.

Obama did three with ease, Shell said, before dropping down and walking out to make his speech.

“When I'm out and I'm covering these things, I'm constantly beating up on advance staff and press secretaries and going, ‘I’ve got to be back there,’ ” she said. “And they're like, ‘He's not doing anything.’ I love it when he's not doing anything. Because (those pullups) were not planned. He just went by and did it. And I want people to see all that stuff, everything that goes on you don't see at the podium.” 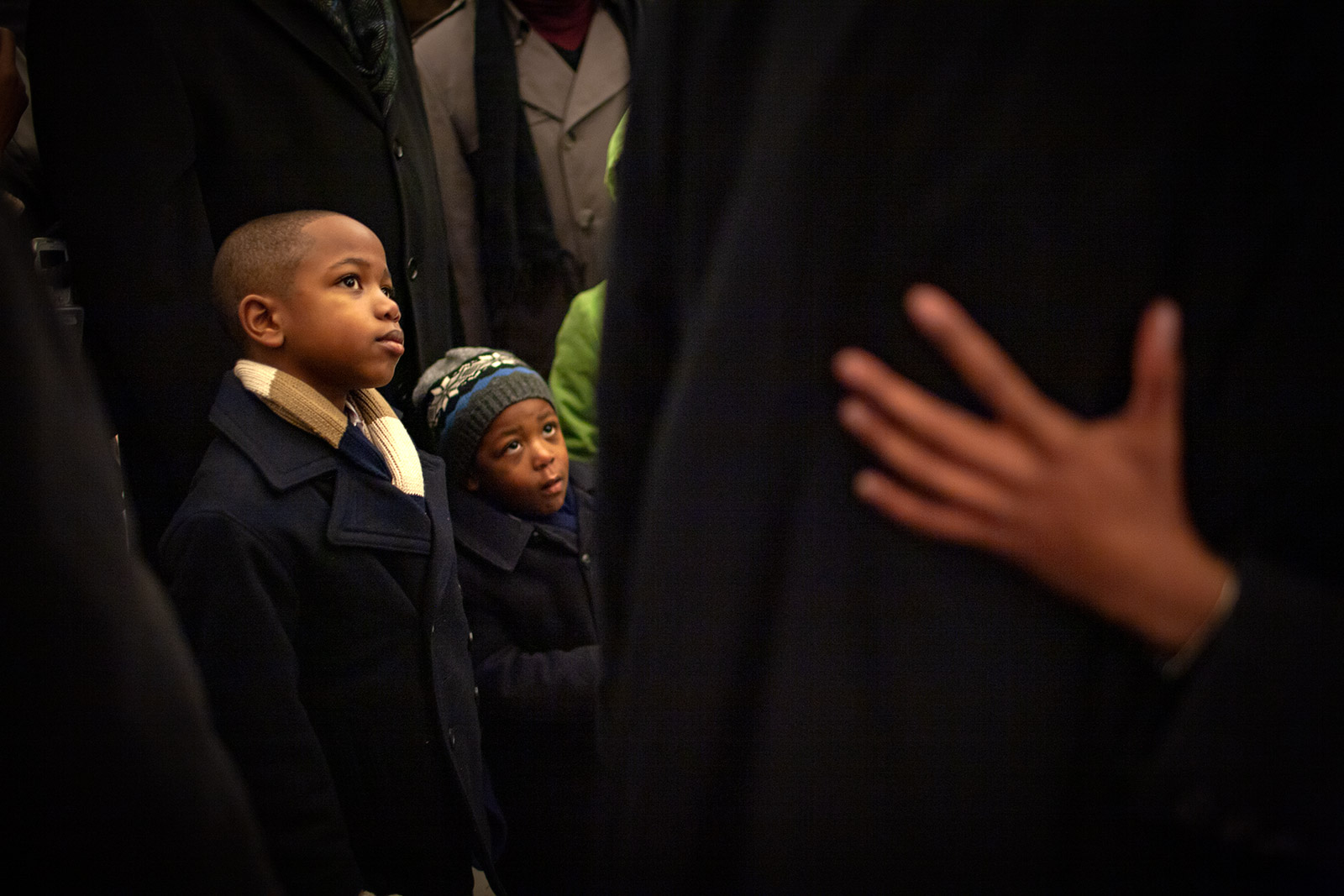 Tre and Caleb Jackson keep their eyes on Obama as the candidate mingles with people while campaigning on Martin Luther King Jr. Day.

“All these adults wanted to greet him, and these two young men were so gracious and polite,” Shell remembers. “At one point (Obama) just turned around and he said, ‘You guys have been the most patient two gentlemen I've ever known.’ ”

The boys were there with their grandmother.

“She said, ‘Oh my God, you have no idea what this means to these boys, to see another black man running for president and to be possible that he could win,’ ” Shell recalled. 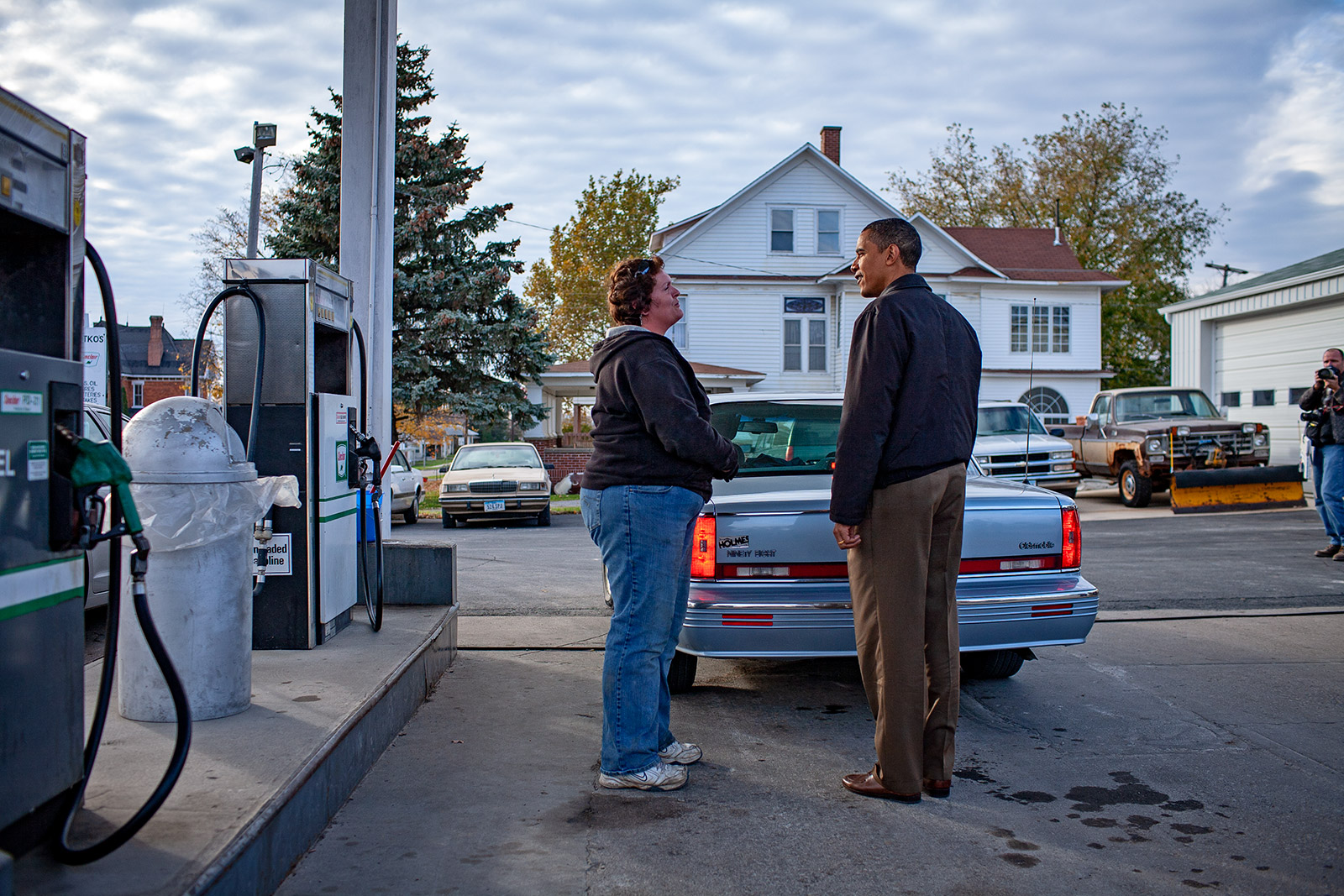 Obama, while running for president, stops to talk to a woman at a gas station. He had just bought a paper-bag lunch across the street.

Shell was struck by how sincere Obama was with voters, especially in the early days of his campaign when he was still making a name for himself.

“He always said, ‘So what have you heard about me?’ ” Shell said.

“I think he really got it. He knew that he had to say hello to every single person. … I'm not saying you have to promise the world, but they want to know that you can relate to their needs. And he was great at that. He gripped every hand and he listened.” 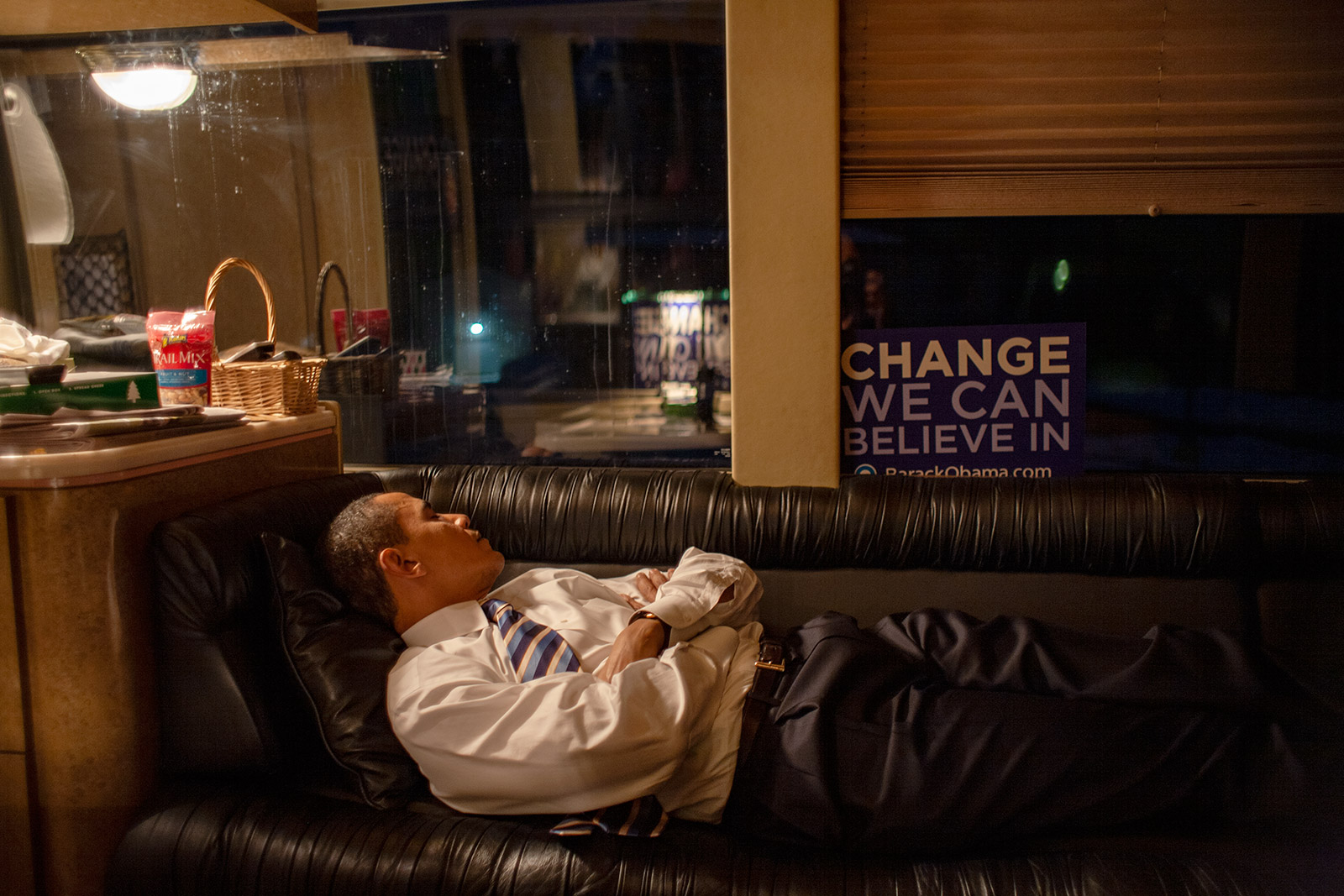 Obama takes a brief nap on the campaign bus between late-night rallies.

“This is what a campaign's like: You sleep on a bus. You're away from your kids. You're sleeping in your clothes,” said Shell, who has covered several presidential campaigns.

Obama was fine with being photographed while sleeping. They just had one rule, Shell said.

“When we were riding in the van once and he was about to fall asleep, I asked for permission. He told me, ‘Just as long as my mouth doesn't fall open.’ 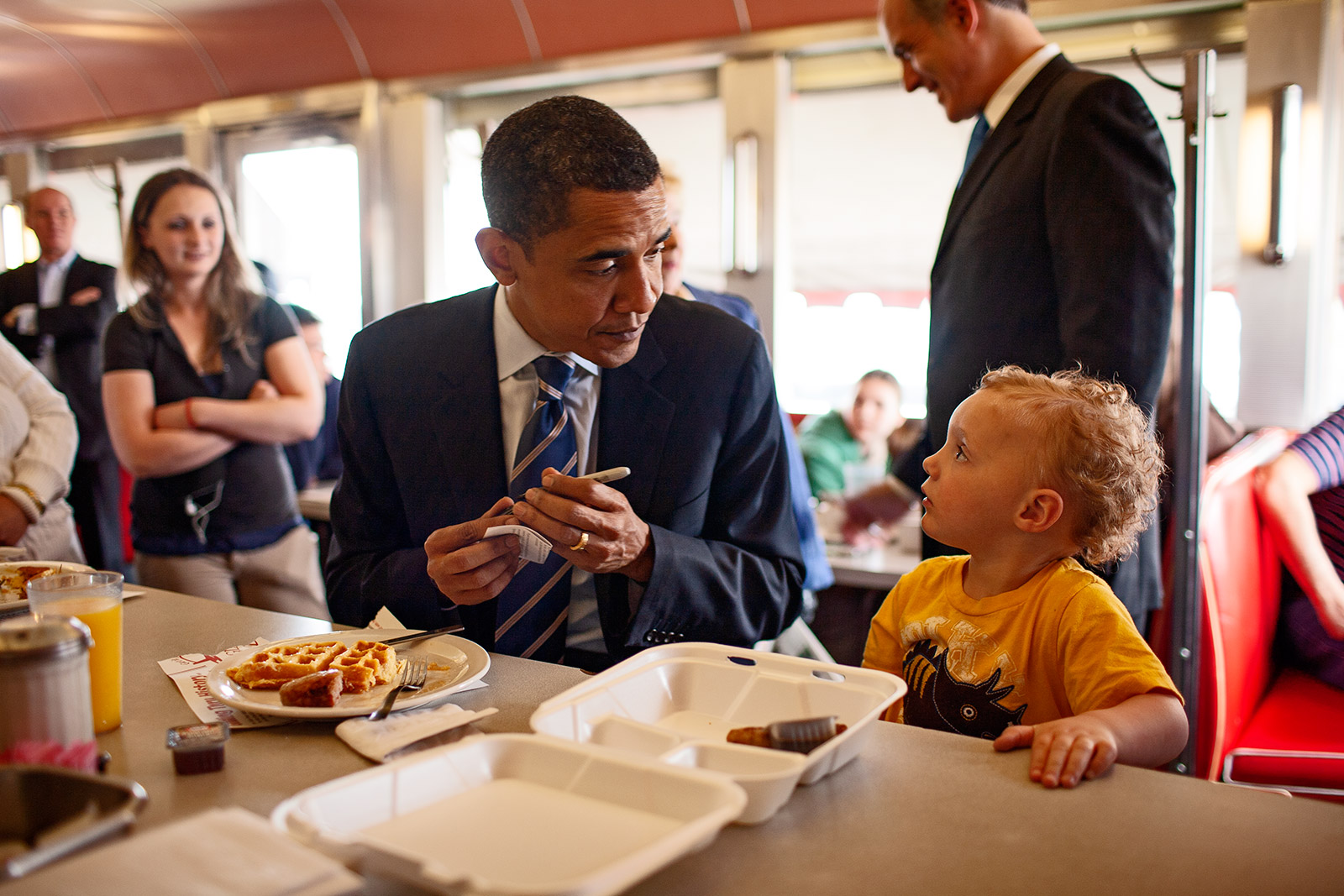 Obama sits with Daniel Van Dusky while eating breakfast at a diner on the morning before the Pennsylvania primary.

Seeing children on the campaign trail was special for both Obama and Shell, who often bonded over their kids and talked about how much they missed them. Shell’s son, Hunter, is about the same age as Sasha.

“I could sympathize with how depressing it was to leave your kids,” Shell said. “I got kind of really bad because we would see kids and I'm just bursting out in tears.”

When Obama won the election, Shell was offered the chance to be the official White House photographer. But she turned it down.

“I had been a White House photographer for eight years, so I knew I would never see my son,” said Shell, who was Al Gore’s official photographer during his vice presidency.

Still, they worked out an agreement where she would be allowed to pop into the White House and take photos from time to time. 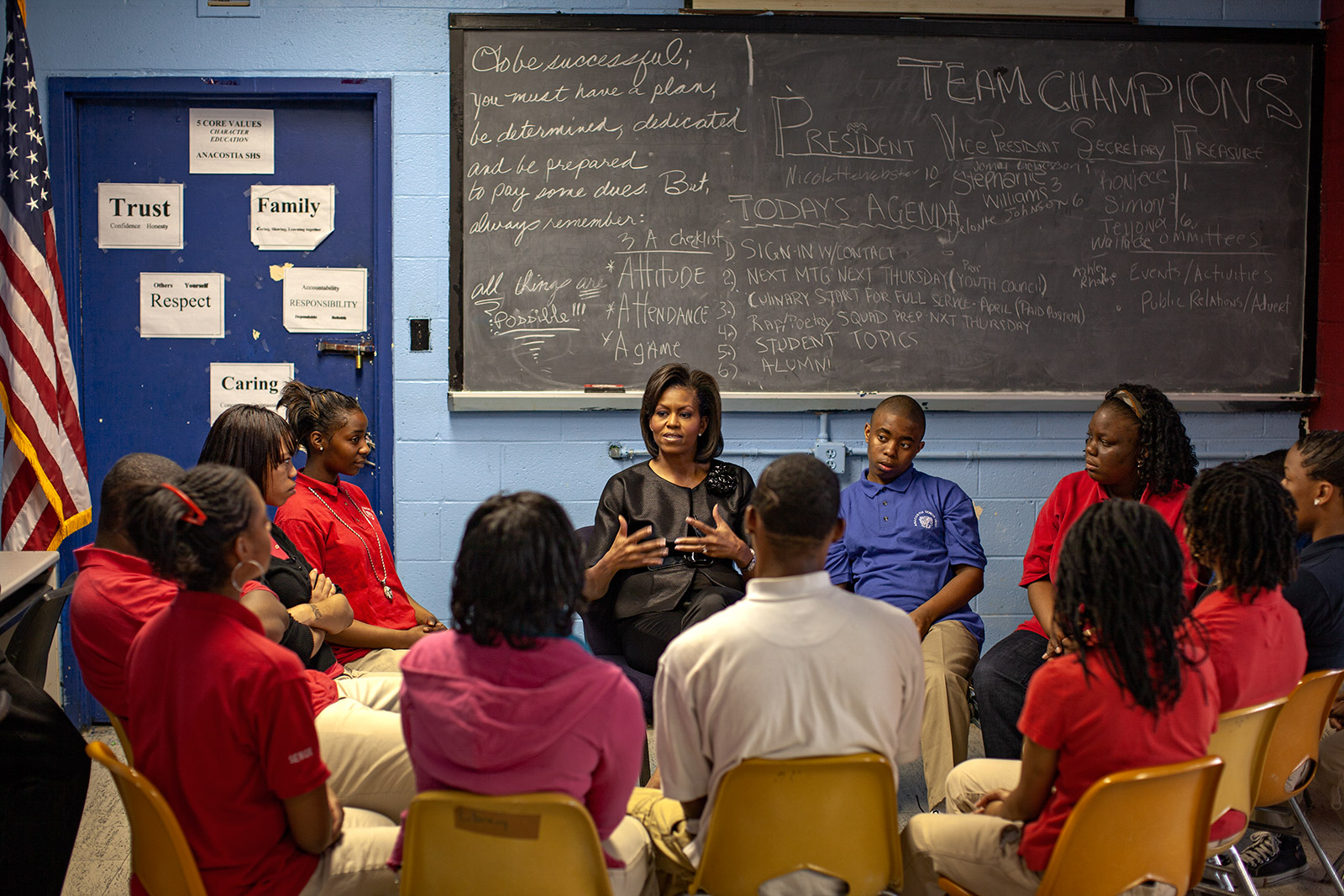 This photo was taken after the press scrum had left.

“I was doing a behind-the-scenes story on (Michelle Obama), so I stayed,” Shell remembers. “And then she said, ‘OK, what do you really want to ask?’ ”

The students’ first question: Do you do your own makeup?

“She laughed and she said: ‘I used to. I did my own makeup and I did my own hair and then they said no, no, no. I guess I was terrible at it. So now I have some assistance.’ ”

The meeting ended with hugs all around.

“She always said, ‘I hug them so they know I'm real,’ ” Shell recalled.

The first lady later returned to give the school’s commencement speech in 2010. 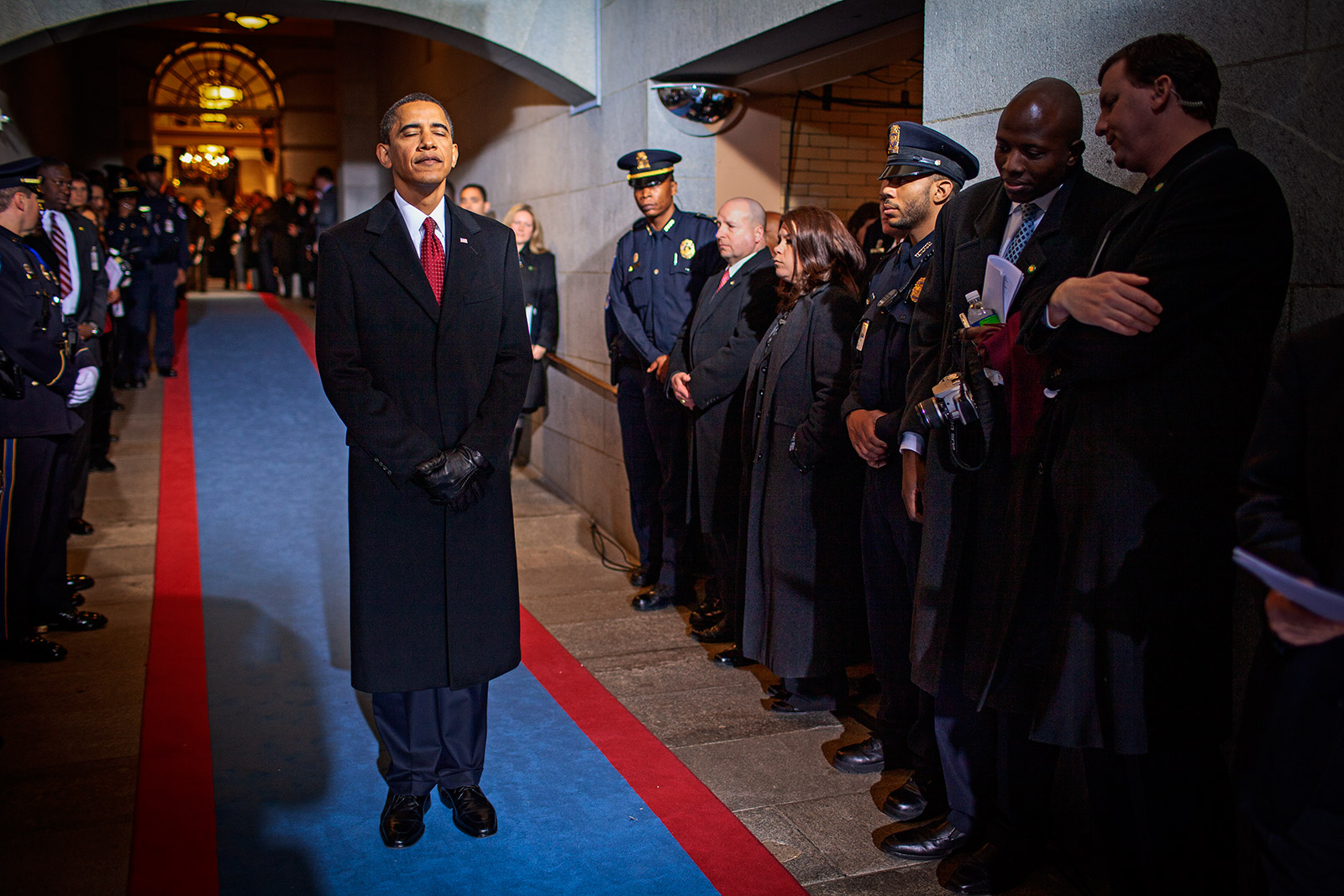 Obama waits at the US Capitol before being sworn in as the 44th president.

Shell was backstage at Obama's inauguration.

“Earlier in the day we're in the holding room where his hands are on the Bible, and I said, ‘Are you nervous?’ ” Shell said. “And he said: ‘No, I've had my speech done in my head for a long time. This is like a wedding. I just got to get to the end.’ ” 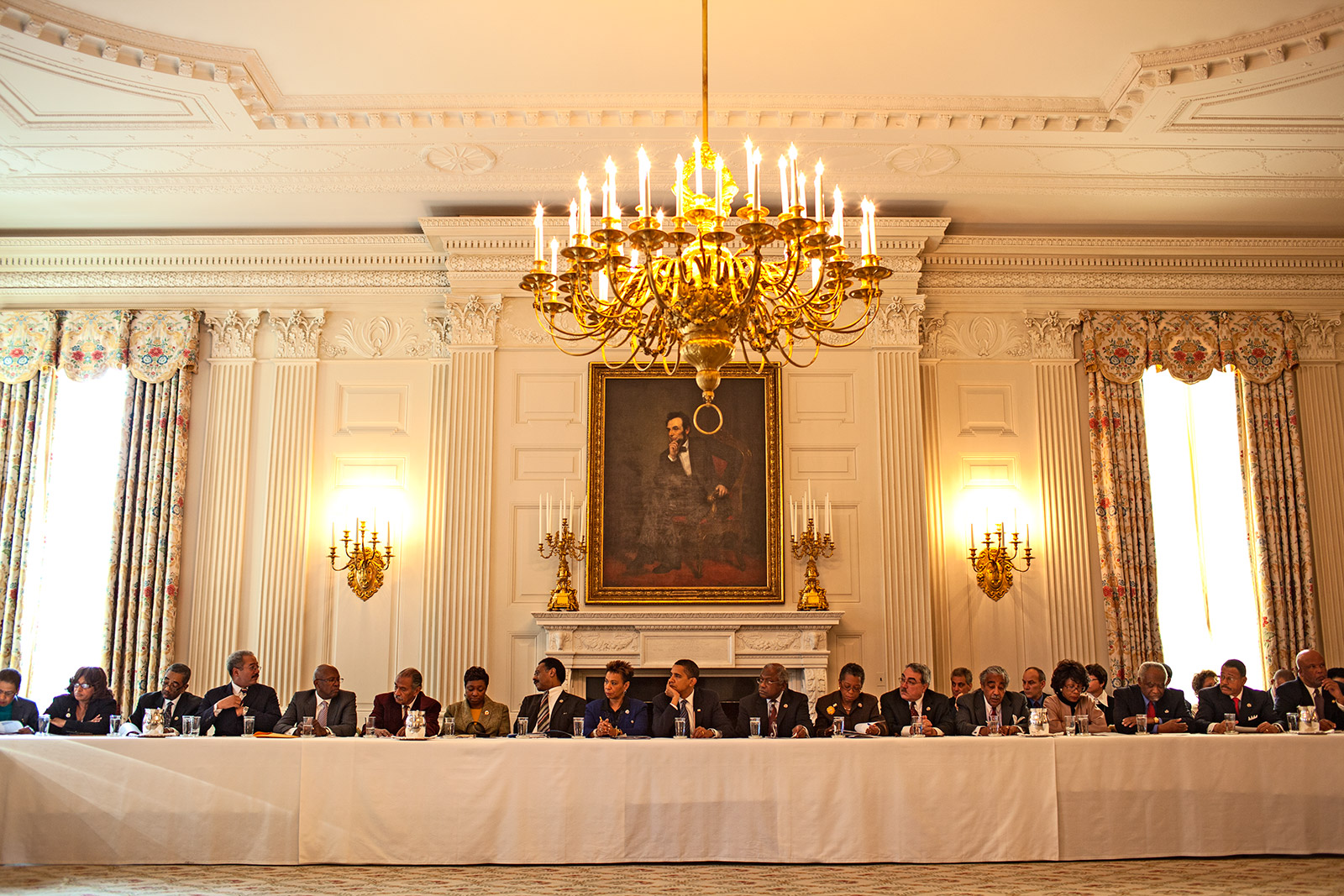 Obama listens as the Congressional Black Caucus meets inside the White House’s State Dining Room. He’s striking a similar pose to Abraham Lincoln above him.

“Can you imagine if you told Abraham Lincoln that, someday, your portrait will be hanging in the White House and the first black president and the entire Black Caucus will be sitting at the same table together?” Shell said.

She recognized how great a photo it could be as soon as she walked in the room — a room she had been in hundreds of times.

“I was just like, please don’t blow this,” she said to herself. 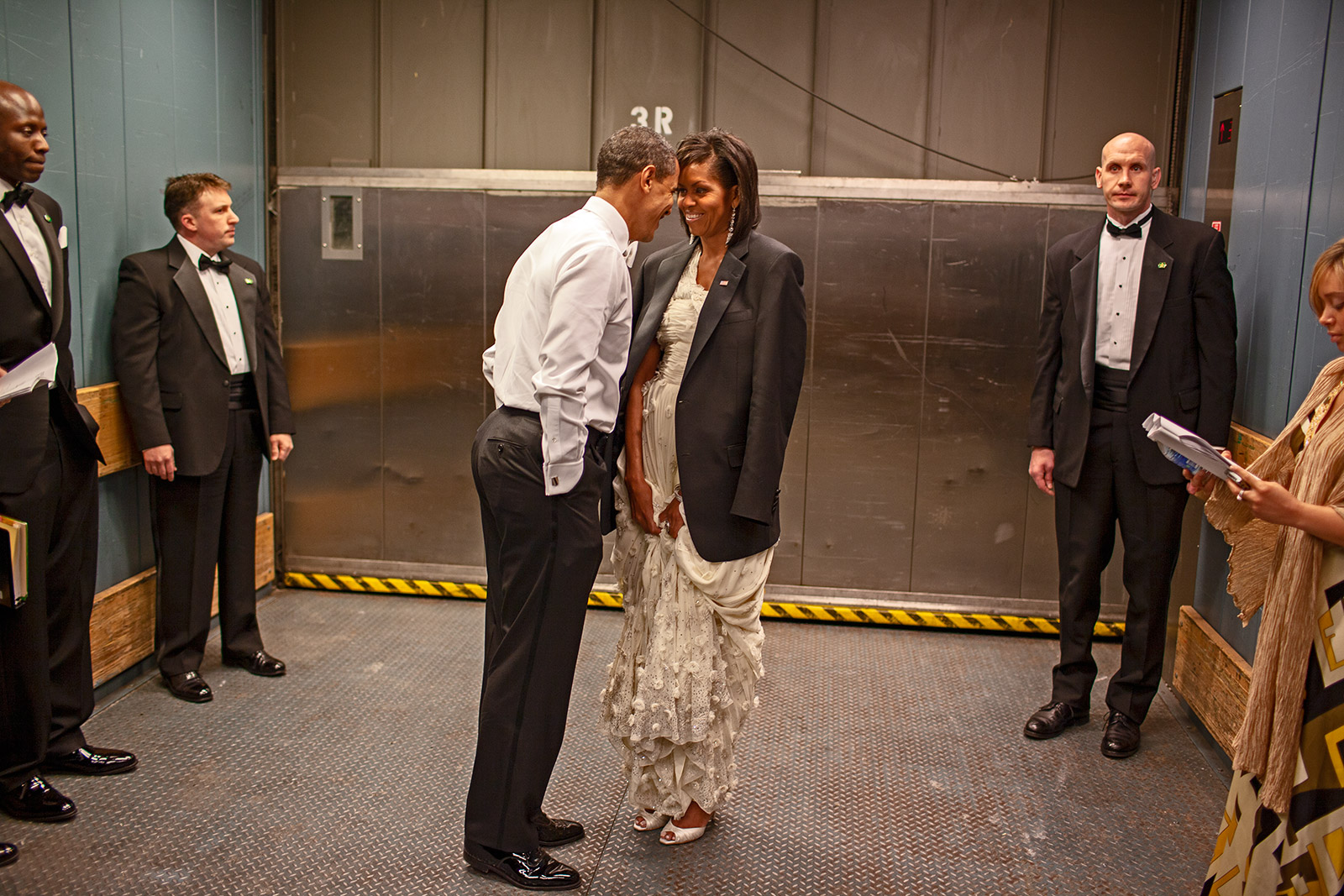 Obama puts his jacket around his wife inside a freight elevator. They were heading to another inaugural ball after attending several that night.

When this photo was taken, the Obamas were heading to another inaugural ball after attending several that night.

“He was bragging because he had not stepped on her dress yet,” Shell said. “She was like, ‘Well, that's because I keep picking it up!’ ” 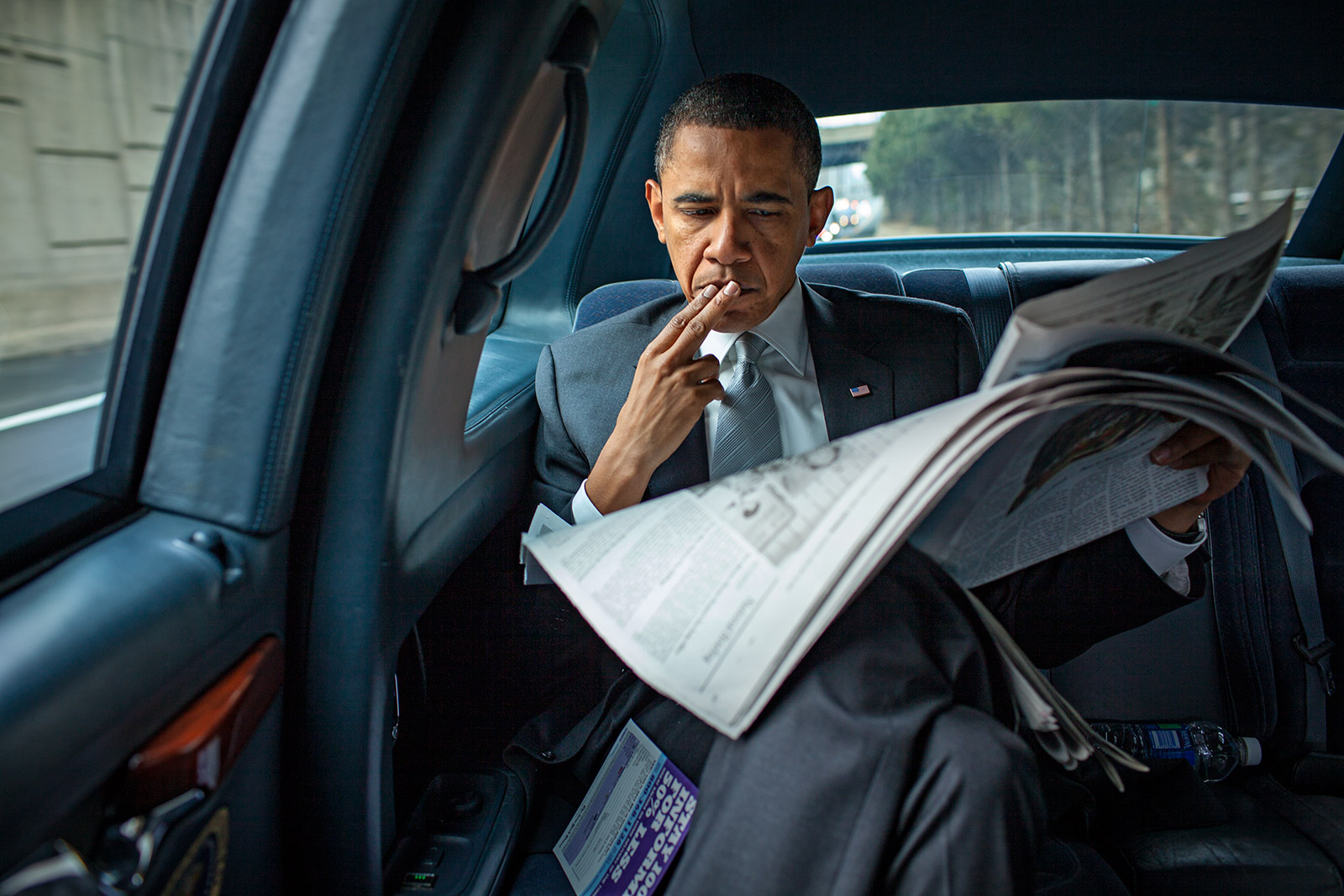 Obama reads over the morning papers in a limo en route to the White House.

Obama had just attended an education event in Fairfax, Virginia, when Shell took this shot of him.

At one point he stopped and asked her if she thought she had taken enough photos. Thinking he needed a break, she instinctively put down the camera. But he just wanted to ask her about her son, Hunter, and how he was doing. He then asked her: “So what’s the world like out there? What do people say to you about me?”

He had been in office for a year at that point, and Shell said the photo shows how far he had come from their early days together.

“He's not in the back of a van. He's not on the side of the road. He's in a highly secure bulletproof limo. His life has really changed,” she said. 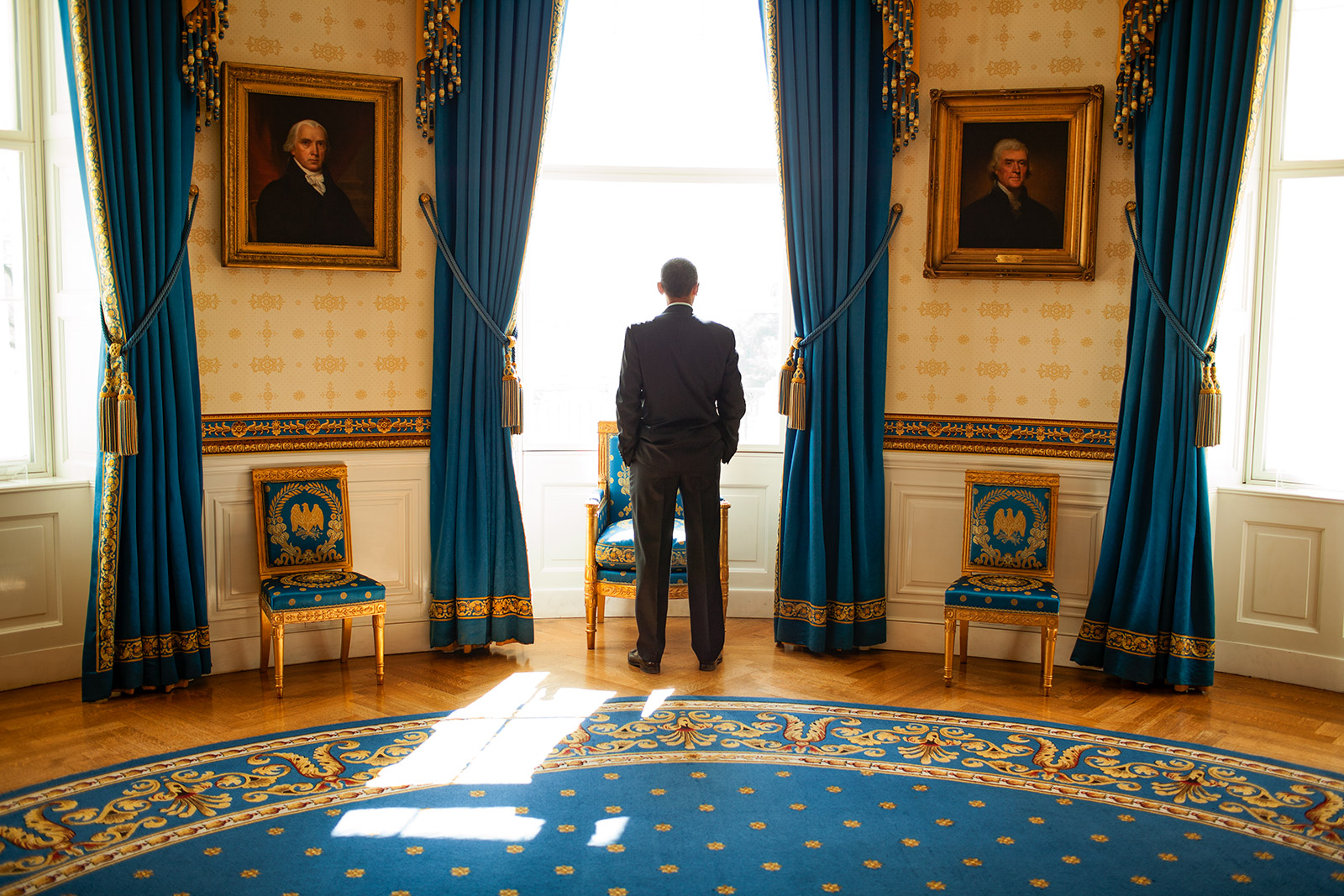 Obama, in the Blue Room of the White House, looks out over the South Lawn as he waits for an event to begin.

Early in his term, Obama told Shell, “I feel like I live in a museum.”

She said being president is “like the loneliest job where you're never alone.”

People always ask her if Obama changed over the years. She looks at it a different way.

“I really do believe that the office reveals who you are,” she said. “I don't think it changes you.”