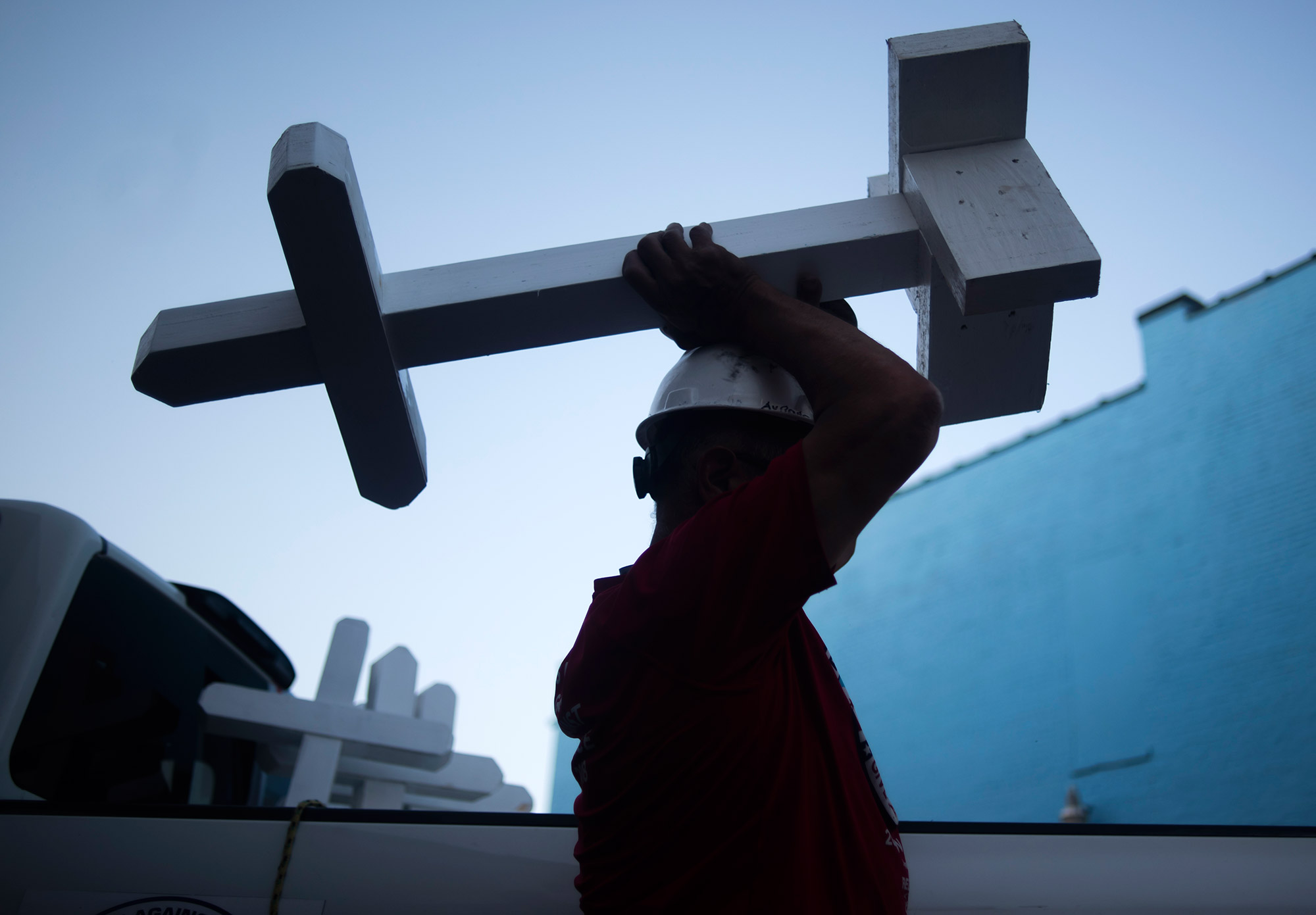 For 23 years, he’s delivered crosses after massacres. This was his hardest week yet

Editor’s note: This story originally published in August 2019. Greg Zanis passed away on May 4, 2020.

Dayton, Ohio (CNN) — When Greg Zanis travels to the sites of mass shootings, he brings a handmade cross for each victim, but he also carries a few extra to hand out as gifts.

“They were trying to buy them from me in El Paso, but I need them here,” the Crosses for Losses founder said as he turned his full-size Nissan pickup, its bed packed with nine crosses, onto Fifth Street in Dayton.

This marked the first time Zanis had to drive from one shooting location directly to another. After a gunman killed 22 people at a Walmart in El Paso, Texas, and another shooter took nine more lives several hours later in Dayton, Zanis began a journey of roughly 3,500 miles.

CNN joined the 68-year-old Wednesday near the Indiana border on the last leg of his trip. He’d already driven 1,500 miles from his home in Aurora, Illinois, to El Paso, then another 1,600 miles to Dayton, despite collapsing Monday in South Texas’ 101-degree heat. 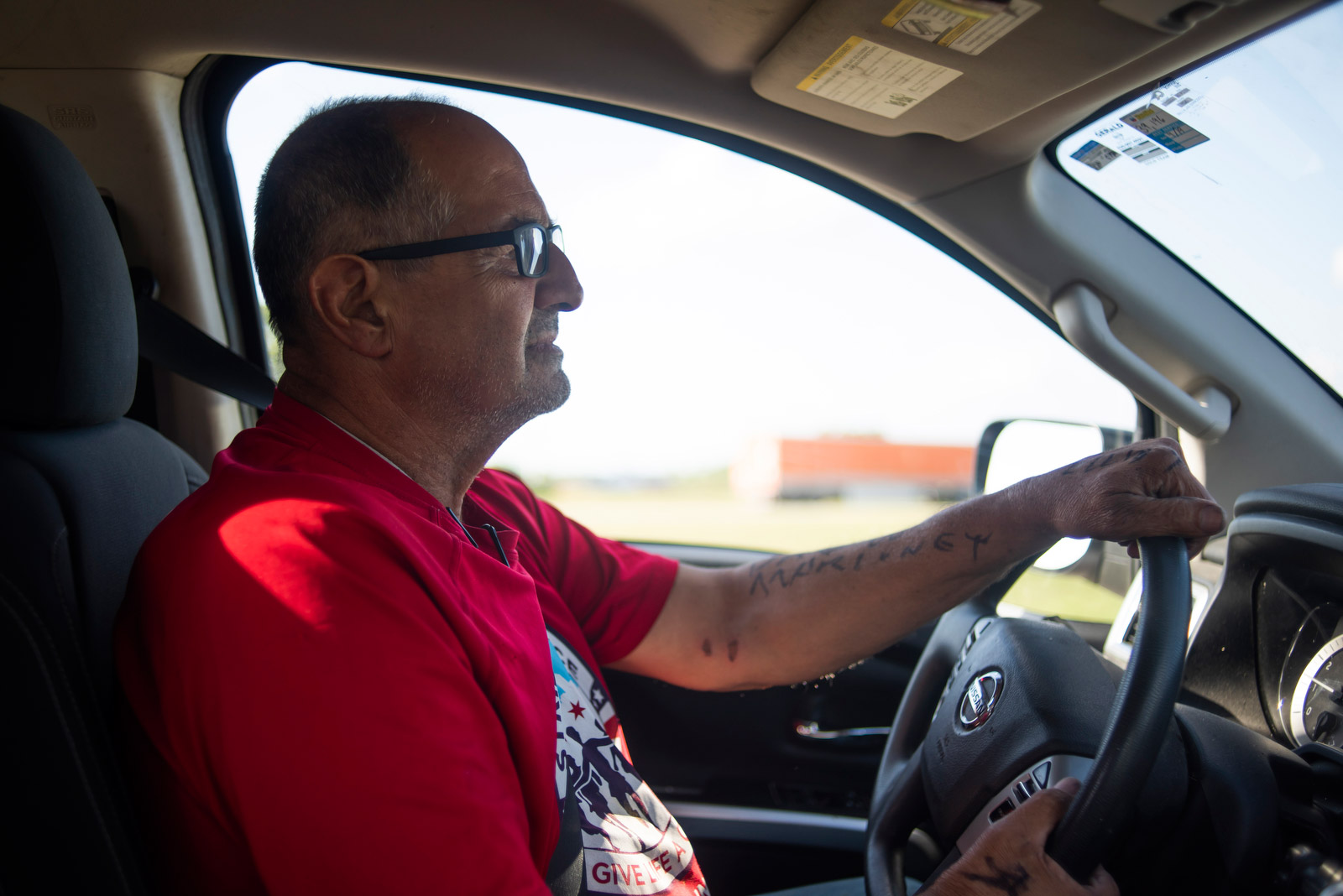 On the 3,500-mile trip, Zanis sleeps in his truck from midnight to daybreak. He brings his own food: sandwiches with no mayo made of “whatever’s in the refrigerator,” Mandarin oranges and Craisins, crackers, canned lentils and cream of chicken soup. “I’ve eaten everything I’ve brought with me,” he said. “I’ve brought two coolers, and I’m out of food.” 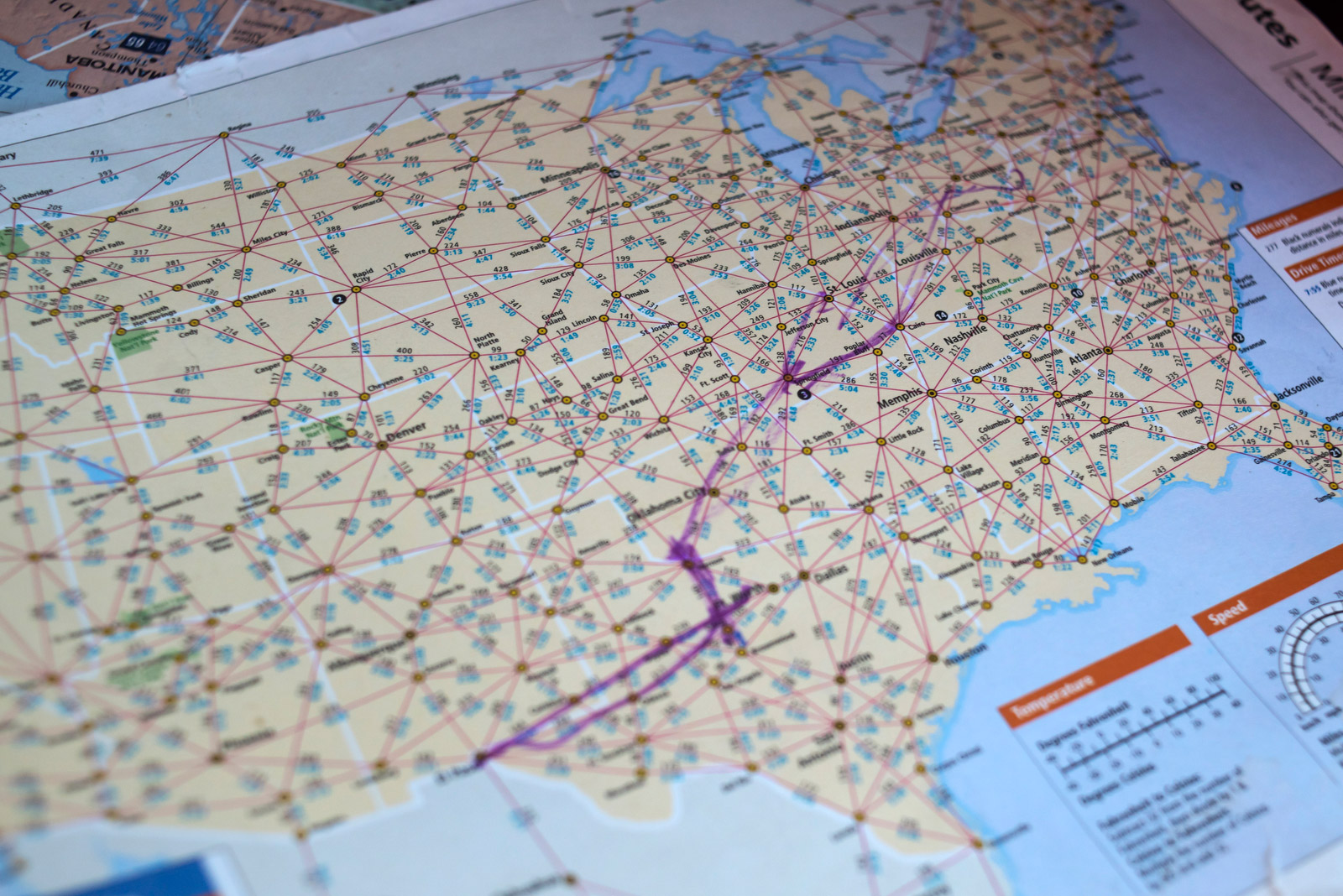 A map in Zanis’ truck shows the 1,600-mile route he sketched out from El Paso to Dayton. It’s the first time he’s had to make crosses for back-to-back mass shootings — 20 for El Paso and nine for Dayton. After Zanis left El Paso, the death toll climbed to 22.

“It’s the hardest week I’ve ever had in my life,” he said as he trucked east on Interstate 70. “I go out all the time, but not like this.”

Since 1996, when he found his father-in-law murdered, Zanis has built 26,680 crosses, he said on the drive. He would add nine names to his orange notebook after Dayton, he said.

He estimates 21,000 are shooting victims. He’s also taken his white crosses to the aftermath of tornadoes and wildfires, bus and boat crashes, and to Martha’s Vineyard after JFK Jr. and his relatives died in a plane crash. He took five in February to the Henry Pratt Company after a shooting unfolded in his hometown.

Asked how he staves off sadness, he said he doesn’t.

“I break down. You’re going to see me cry. I don’t mind,” he said. “I hug victims all the time, and I try to be strong, but I’m really not. I’m OK with that. I feel so good afterwards because I’ve done something.” 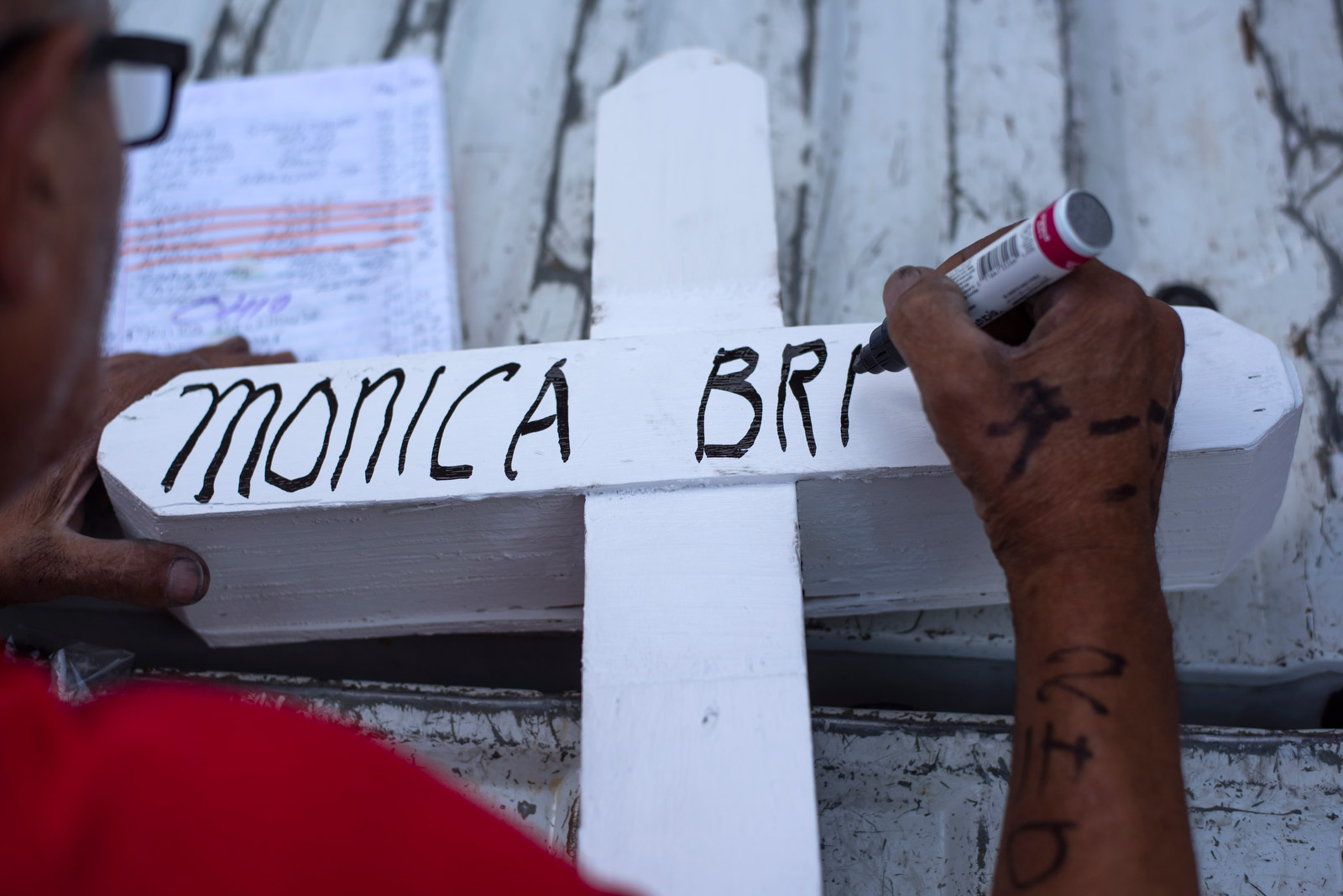 Zanis writes the name of Monica Brickhouse, a victim in the Dayton shooting, on a cross he constructed in his Aurora workshop. He says he’s spoken to relatives who still have crosses he made 20 years ago. “That’s all they have left, and it means everything to them.” 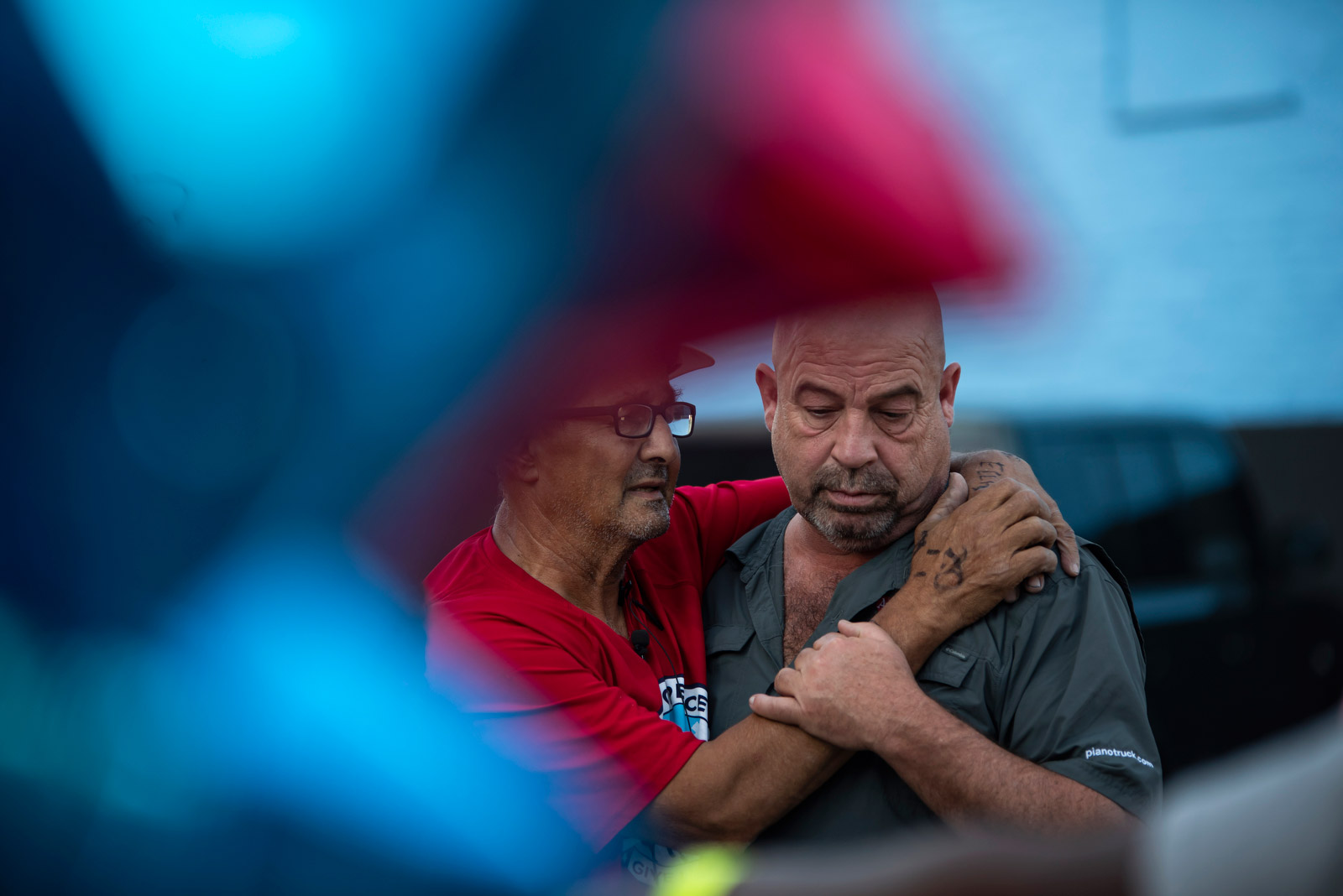 Though the crosses are already made when he arrives, it takes Zanis more than three hours to prepare them and place them on Fifth Street, as he stops to speak with anyone who approaches. No one is a stranger. There are never handshakes — only hugs.

Zanis is a religious man. He grew up Greek Orthodox and spent many years as a Baptist, though he’s quick to chuckle about his delinquent days “smoking pot and sleeping in the van” in Key West and racing his Pontiac Trans Am in the cross-country Cannonball Run of Burt Reynolds fame.

The shootings, he believes — and he knows the belief is unpopular — are the consequence of a country that forgot God, beginning in 1962 with the US Supreme Court decision to outlaw official prayer in school, he said.

“When you take God out, why should God help us?” he asked. “I think it’s real simple: a second generation of godless people. We don’t have to have a conscience. … You think any of these people were men of any kind of faith who do the shootings? No.” 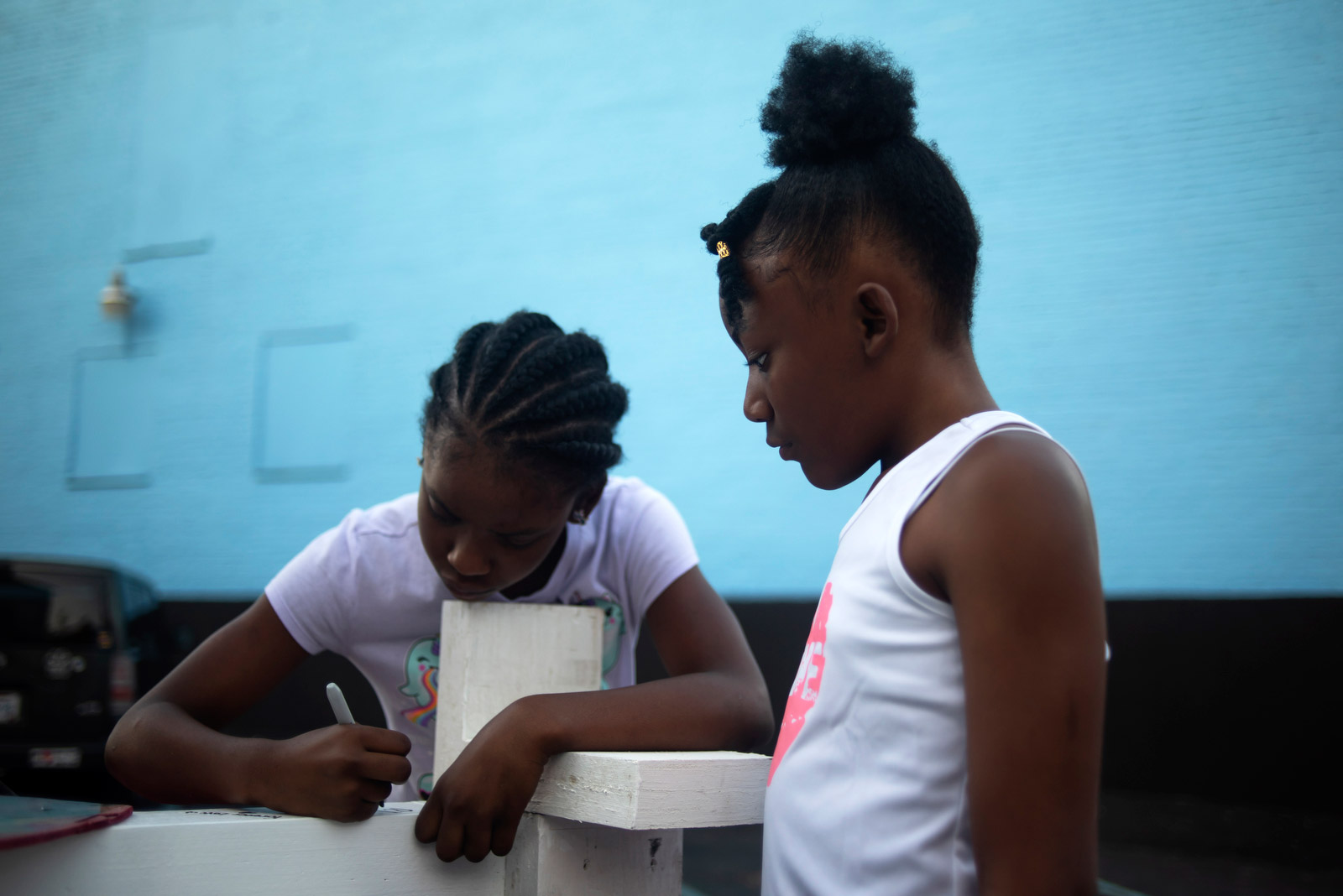 Samiya Booker, 10, writes on one of the crosses after Zanis unloaded it from his truck. Her sister, Neveah, 11, looks on. Zanis leaves the crosses at the shooting sites for 40 days before returning and presenting them to family members. The number is arbitrary, he said. It just seems like the right amount of time. 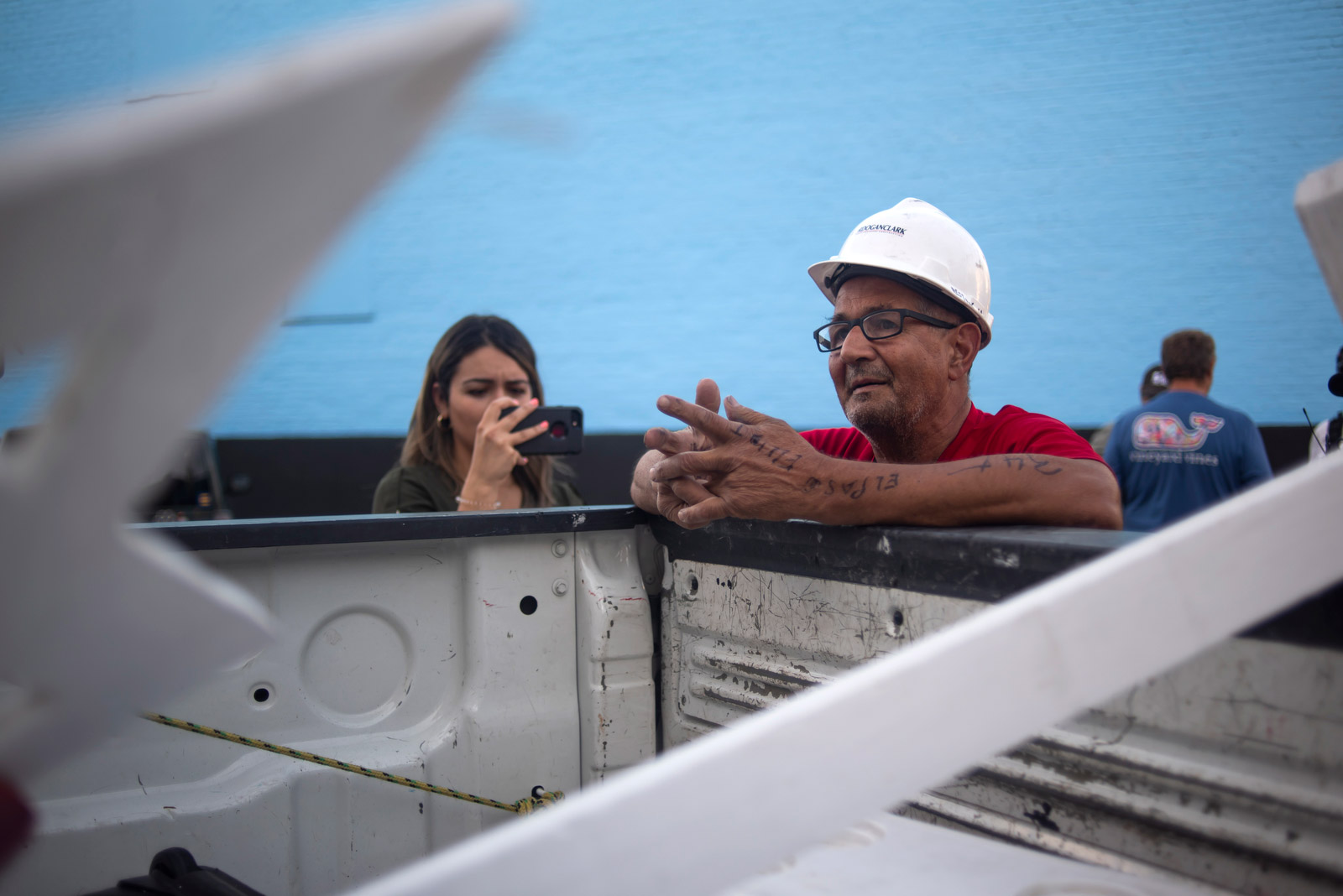 On Zanis’ hands and arms, in permanent marker, are travel notes: the names of journalists and victims, along with the address to Ned Peppers Bar, which the Dayton shooter was approaching when a policeman gunned him down. The scrawlings are an old carpenter’s trick, he said, a way to remember measurements.

The victims’ religions, however, don’t matter to Zanis. He scans their obituaries to determine whether he should bring crosses, Stars of David or crescent moons. He’s memorialized Buddhists and atheists, as well. He never pushes Christianity, he said.

“I’ve never been an advocate or a loudmouth because I feel that people will point at me and say, ‘Look, he‘s a religious zealot.’ No, no, no, I’m a workaholic. God didn’t give me one thing he gave everyone else. What do you think that is? Well, he did not give me a lazy bone. Everyone’s got one. I don’t.”

But did he have a message for those gathering as he removed each cross from the truck bed and wrote the names of the victims on each one?

“I don’t want to alienate people,” he said. “I’m here for the victims only.” 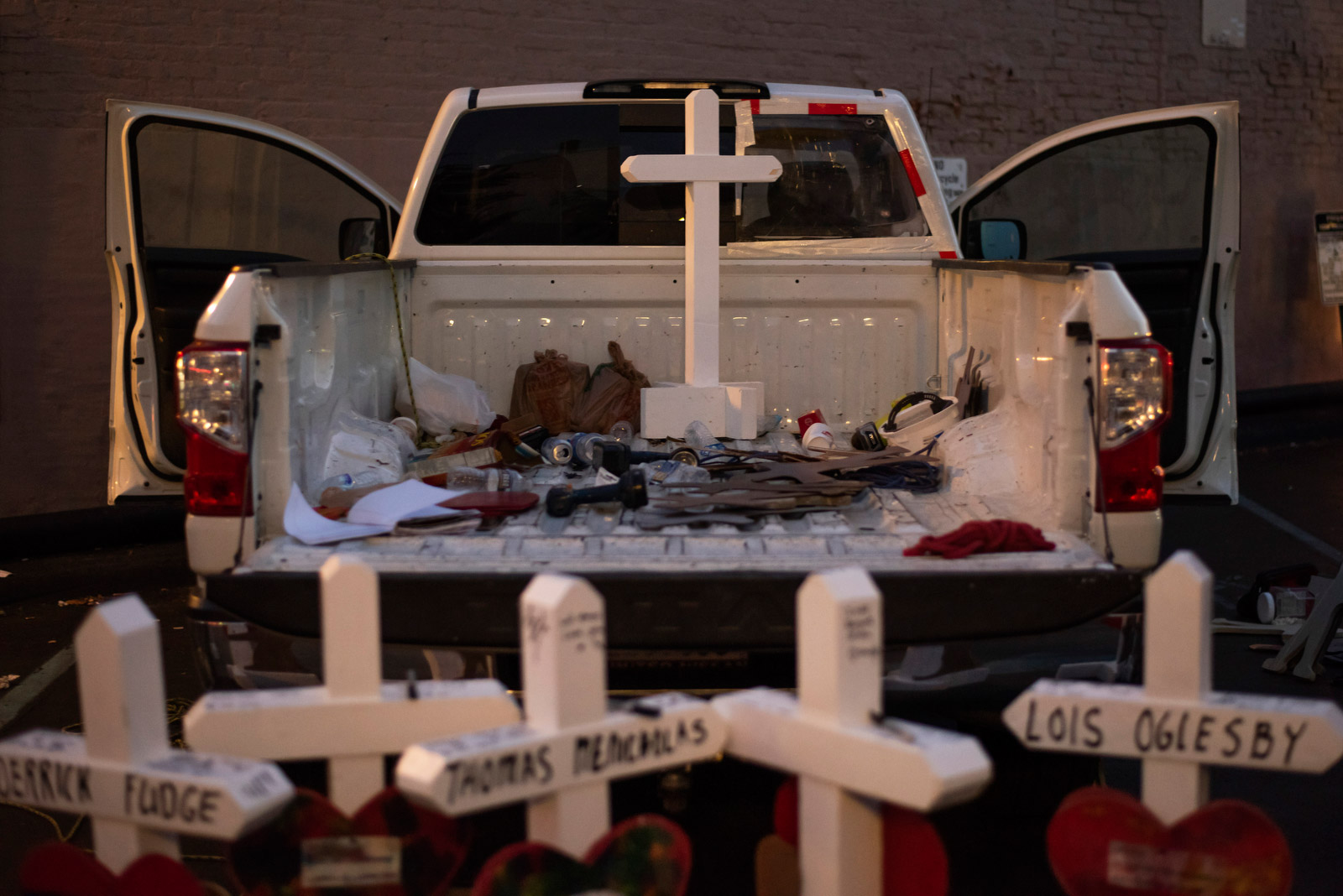 Though the victims in Dayton are memorialized with crosses, Zanis is conscious of religion and strives to honor victims appropriately. Gerald Fischman, slain in the 2018 Capital Gazette newsroom shooting, stands out. Zanis wept recalling how Fischman, who was Jewish, wrote the paper’s Christmas editorial and volunteered to work on Christmas so others could take off. 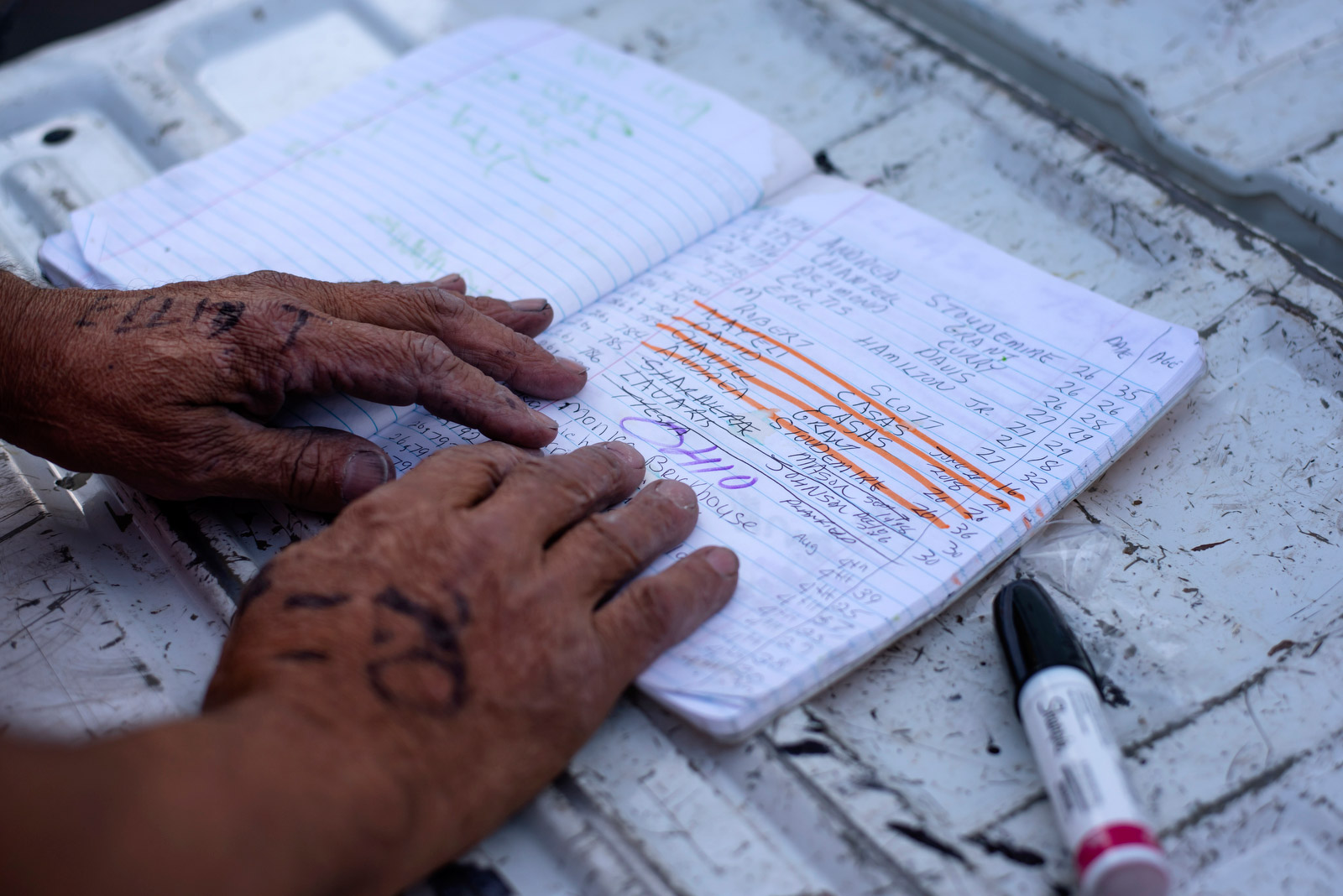 Zanis keeps the names of victims he’s honored in a notebook. “It’s similar to a bomb goes off and leaves a big crater of damage, and, oh my gosh, we fill that in with flowers and candles and teddy bears, and we’re going to make a pile out of it and we’re going to win the dang devil over,” he said.

He spent about three hours accommodating the pack of journalists who rushed to his truck, granting interviews as he placed each cross in front of a growing memorial along Fifth Street.

Without a shred of fanfare or any public pronouncements — but plenty of hugs for anyone who wanted one — Zanis packed up and got back in his truck.

“I’m going home to my own bed,” he told a photographer before abruptly backing out of the parking lot and starting the 330-mile drive home. 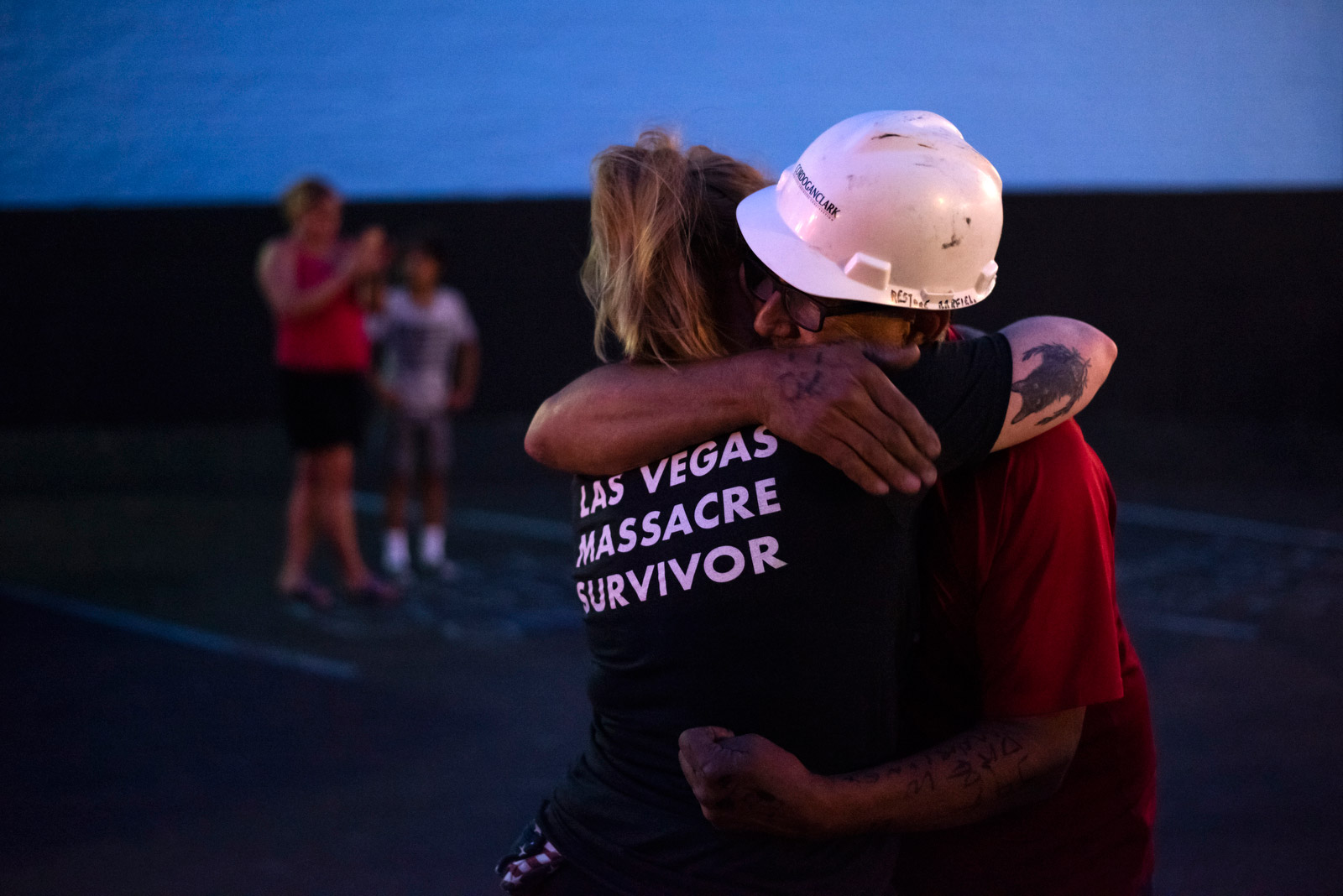 Zanis embraces Leah Matthews, 33, of Cincinnati, who, as her shirt says, survived the 2017 mass shooting at a country music festival in Las Vegas. Zanis honored those victims with 58 crosses, which he placed in front of the iconic “Welcome to Fabulous Las Vegas” sign. Clark County, Nevada, officials declared November 12 “Greg Zanis Day” and presented the carpenter with a key to the Las Vegas Strip. 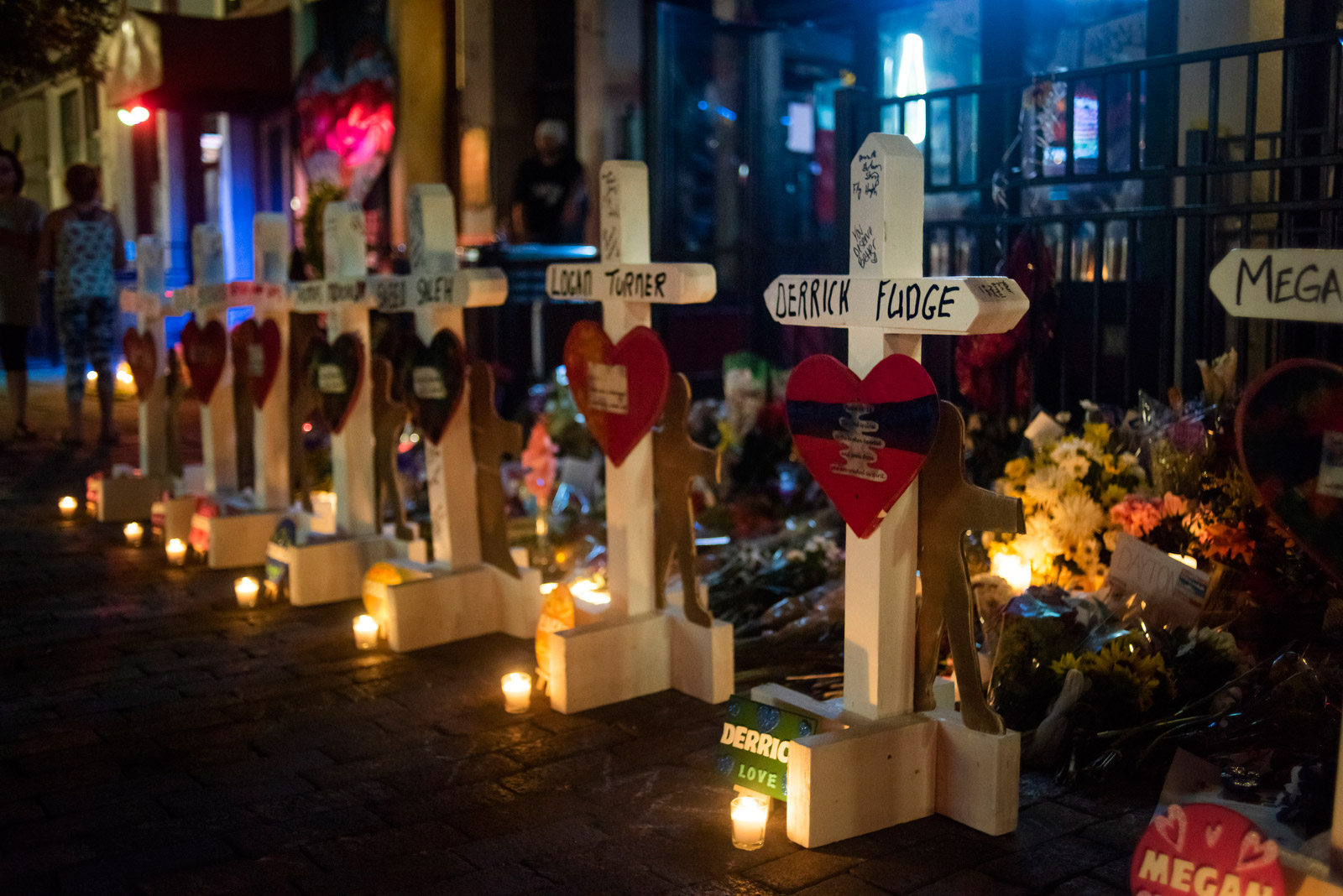 Zanis writes victims’ names and the cities where they were killed on each cross, along with a Bible verse. He also welcomes others to adorn them with remembrances. After he placed the crosses Wednesday on Dayton’s Fifth Street, mourners put candles in front of each memorial.