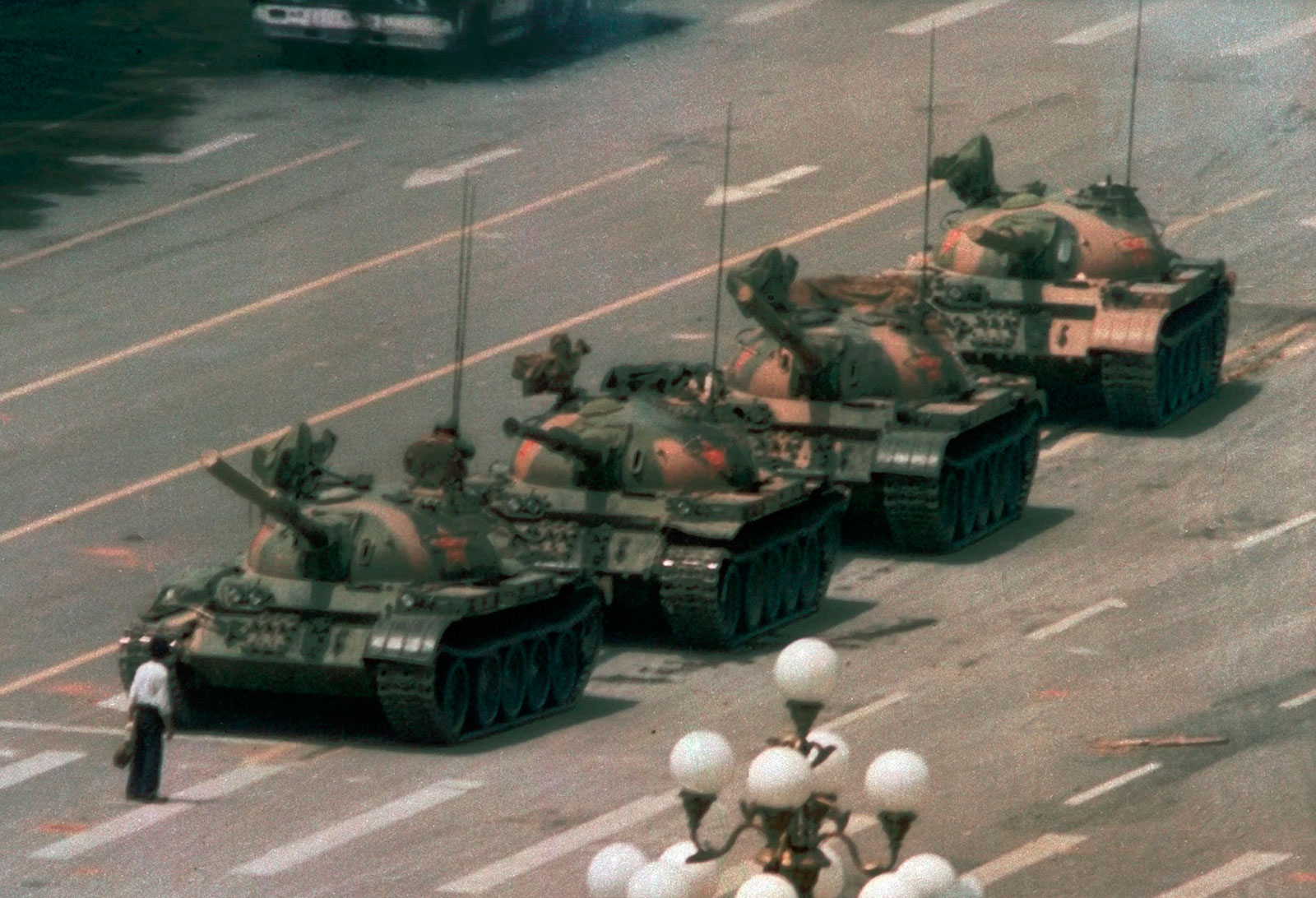 A man blocks a line of tanks on Beijing’s Tiananmen Square on June 5, 1989.

The story behind the iconic ‘Tank Man’ photo

A man blocks a line of tanks on Beijing’s Tiananmen Square on June 5, 1989.

At first, Jeff Widener was annoyed by the man entering his shot.

Widener, a photographer with the Associated Press, was focusing his camera on a line of tanks in Beijing’s Tiananmen Square when out of the blue came this man in a white shirt and dark trousers, carrying what appeared to be shopping bags.

Widener thought the man was going to mess up the composition of his frame.

Little did he know that he was about to make one of the most iconic photos in history. 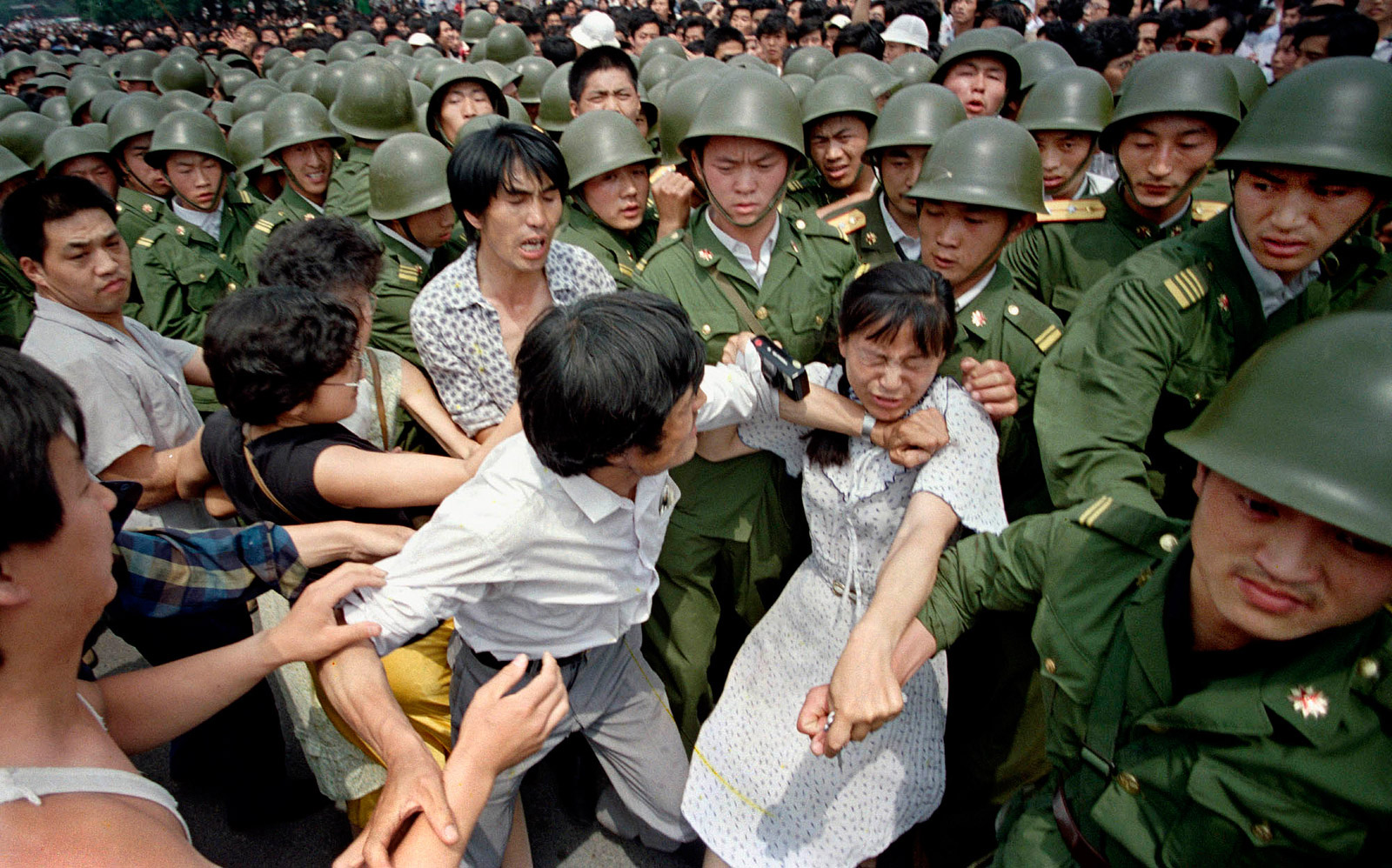 Before “Tank Man,” pro-democracy demonstrators had been occupying Tiananmen Square for weeks. Here, a young woman is caught between civilians and Chinese soldiers who were trying to remove her from an assembly near the Great Hall of the People on June 3, 1989. 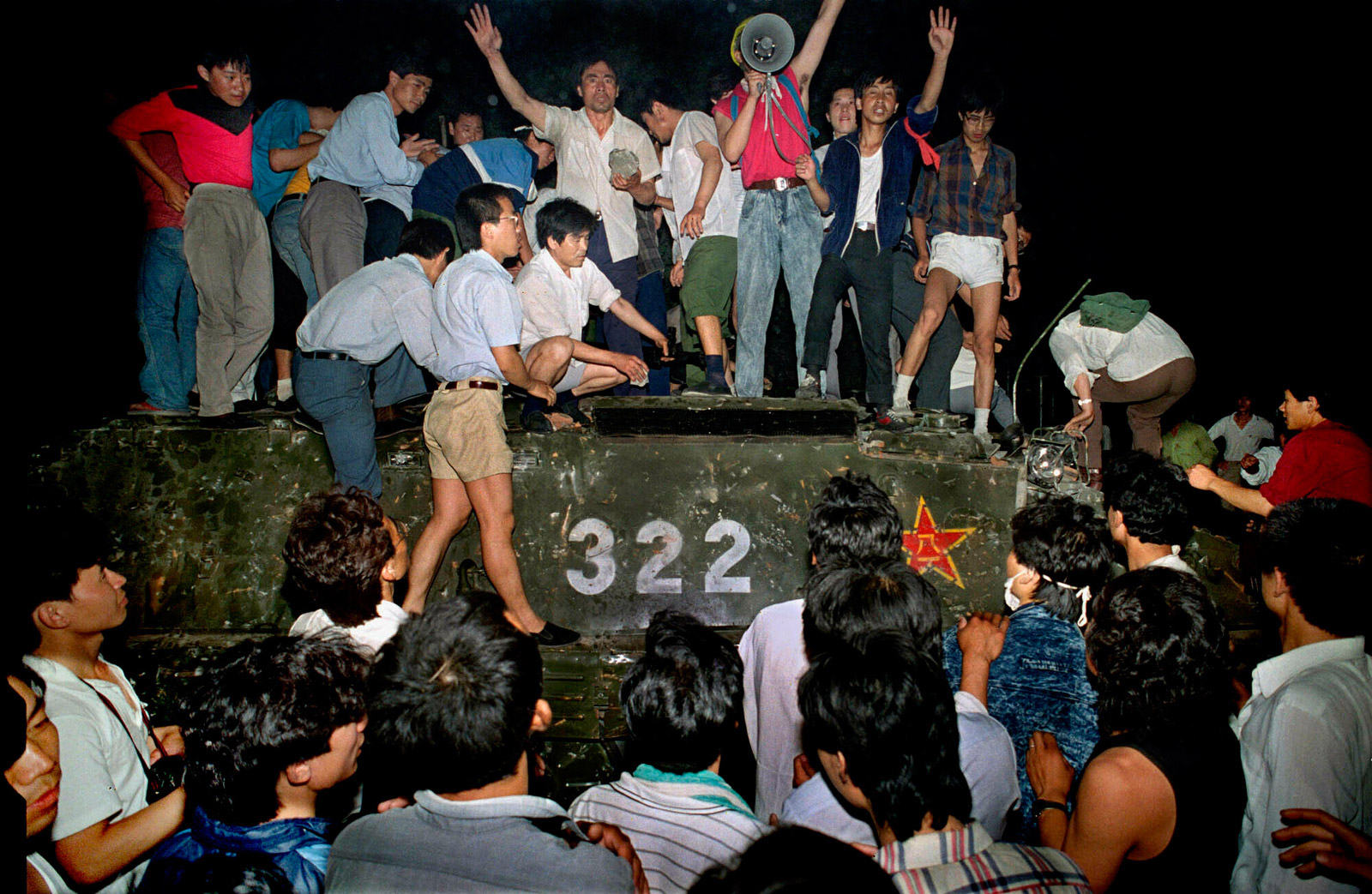 Protesters stand on an armored vehicle on the day China started cracking down on demonstrations.

It was June 5, 1989, a day after Chinese troops began violently cracking down on pro-democracy demonstrators who had been in the square for over a month.

Widener had been in Beijing for a week to cover the protests, and he was hurt when the deadly crackdown began.

“I was hit in the head by a protester rock the early morning of June 4, and I was also suffering from the flu,” Widener said. “So I was quite ill and injured when I photographed ‘Tank Man’ from the sixth-floor balcony of the Beijing Hotel.”

The hotel had the best vantage point of the square, which was now under military control. An American exchange student, Kirk Martsen, helped sneak him in. 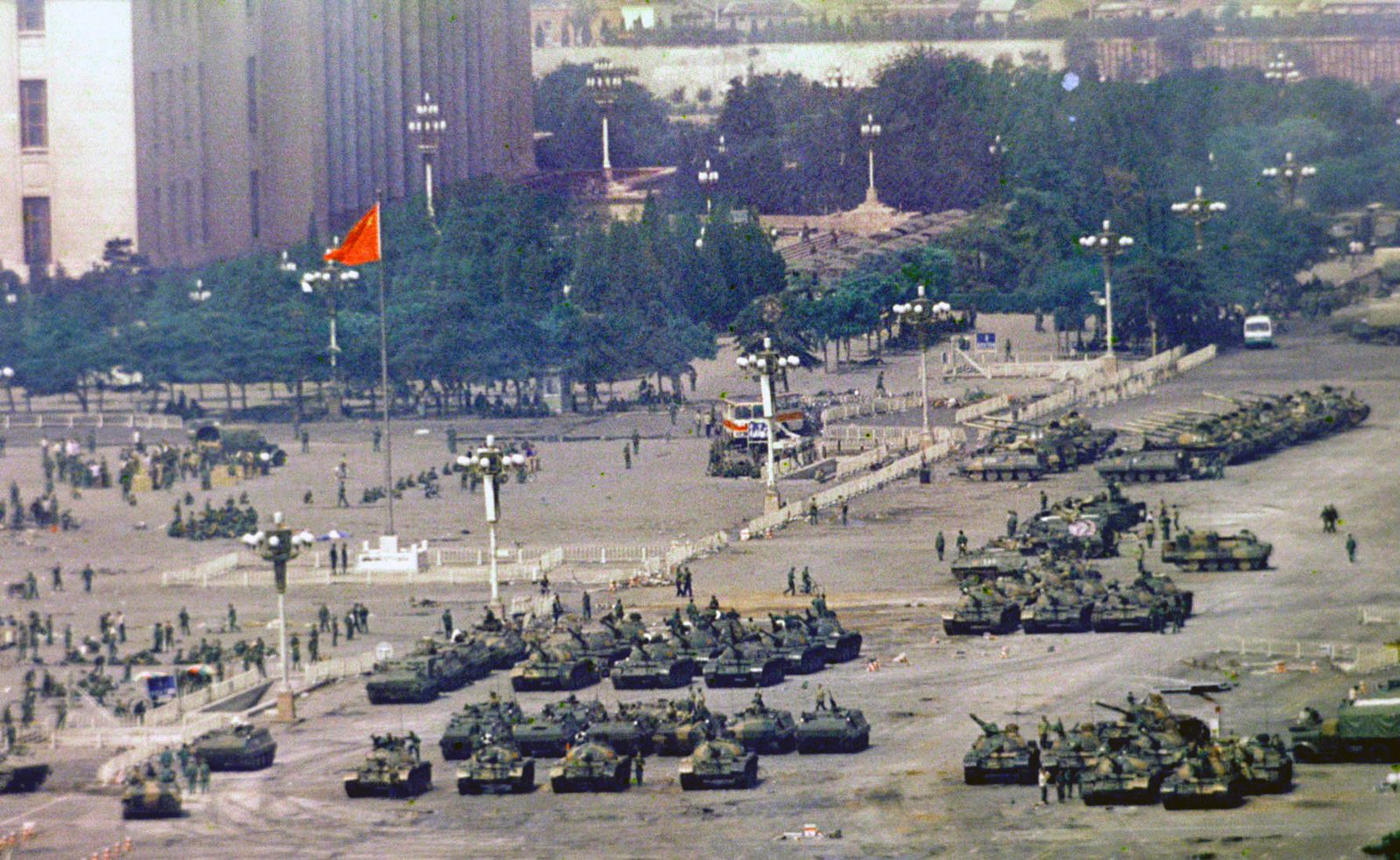 Chinese troops and tanks gather in Beijing on the day after the crackdown began. 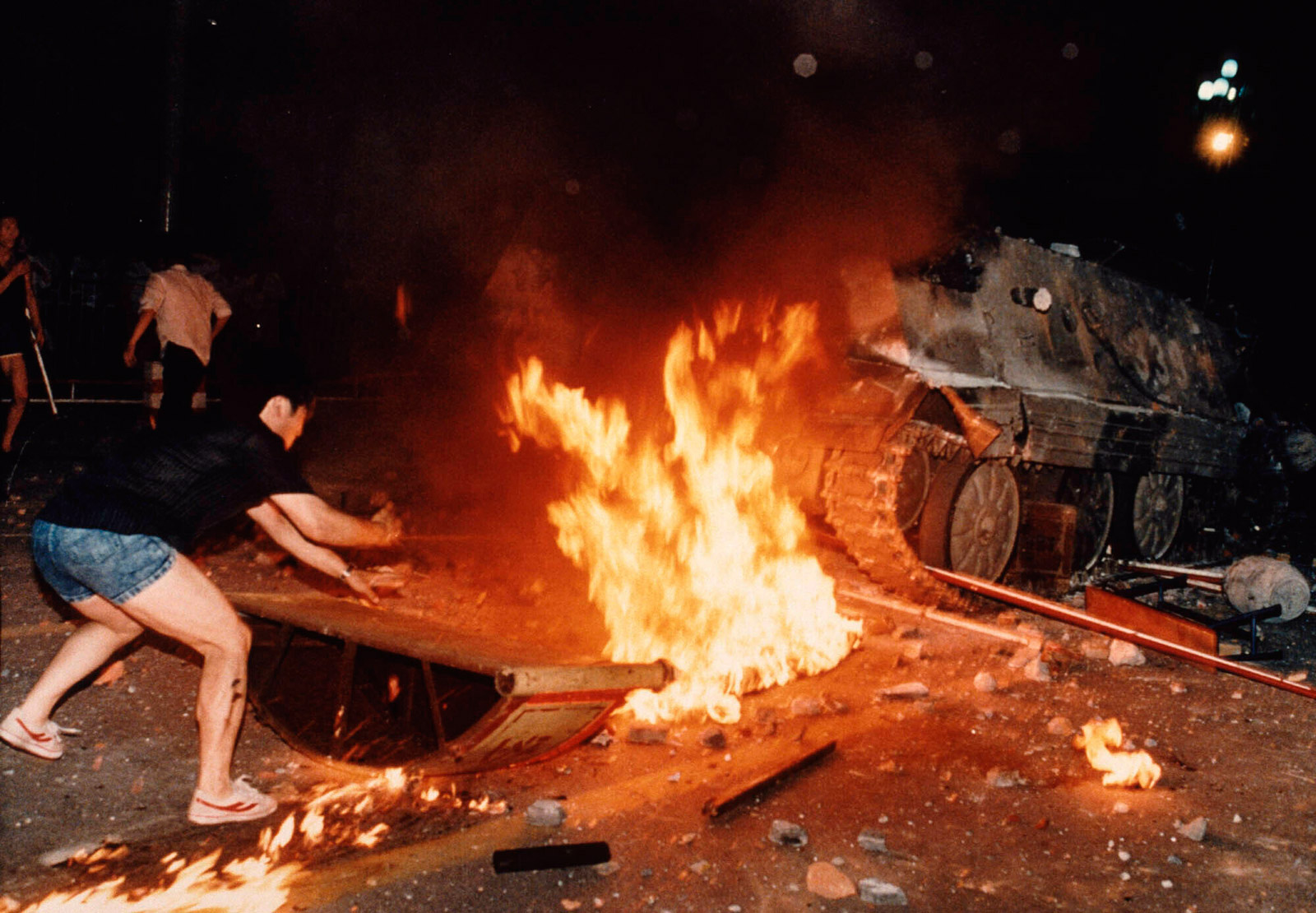 A student protester puts barricades in the path of an already-burning armored vehicle. A soldier who escaped the vehicle was killed by demonstrators.

From the hotel balcony, Widener watched as the man confronted the lead tank, standing directly in front of it. The tank stopped and tried to go around the man. The man moved with the tank, blocking its path once again.

At one point during the standoff, the man climbed aboard the lead tank and appeared to speak to whoever was inside.

“I was about a half mile away from the row of tanks and so I could not really hear much,” Widener said.

The man was eventually pulled away by onlookers. To this day, we don’t know who he is and what happened to him. But he remains a powerful symbol of defiance. 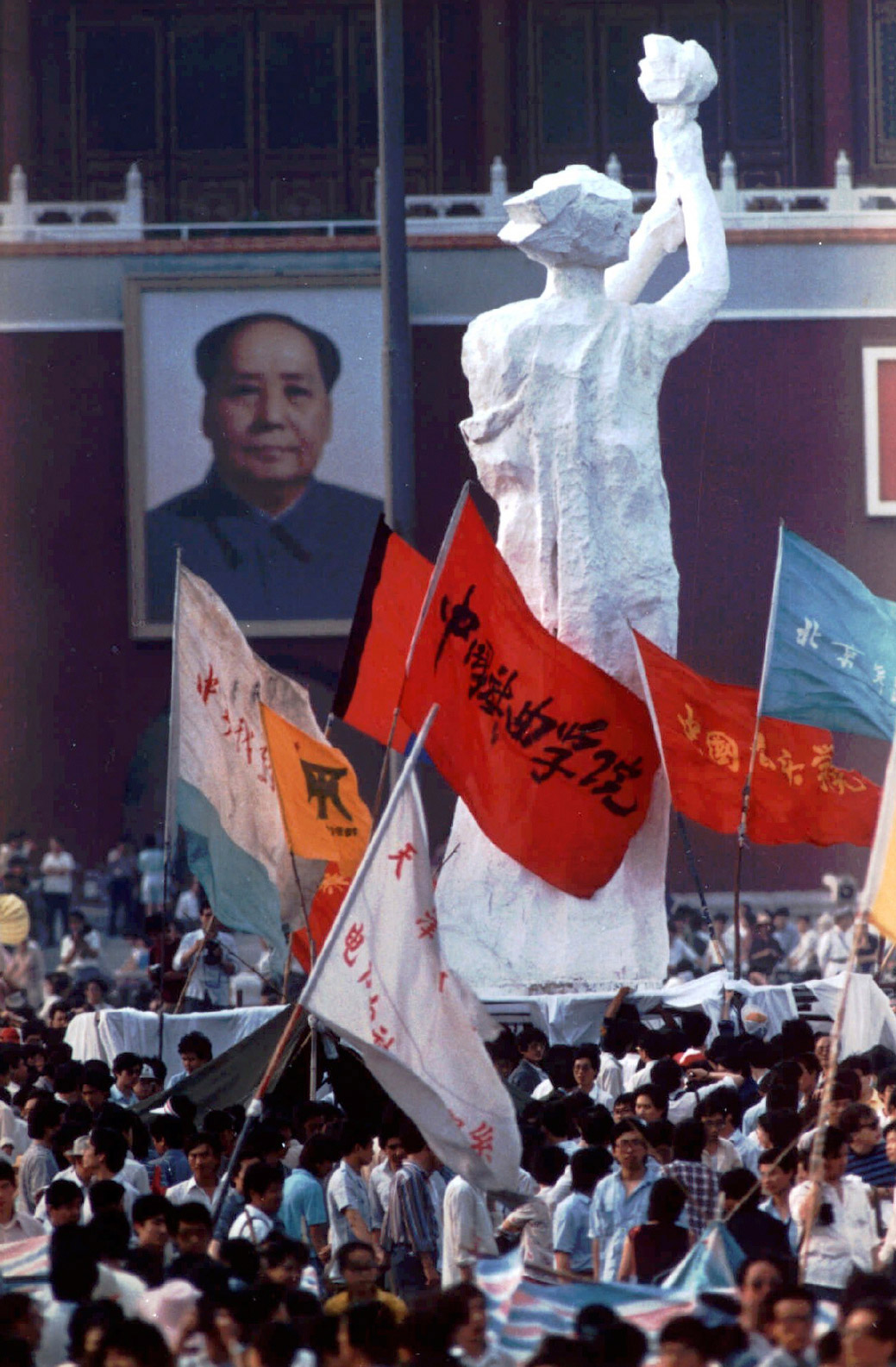 A statue called The Goddess of Democracy, which was erected in just a few days, faces a portrait of communist leader Mao Zedong on May 30, 1989. The statue was modeled after the Statue of Liberty. 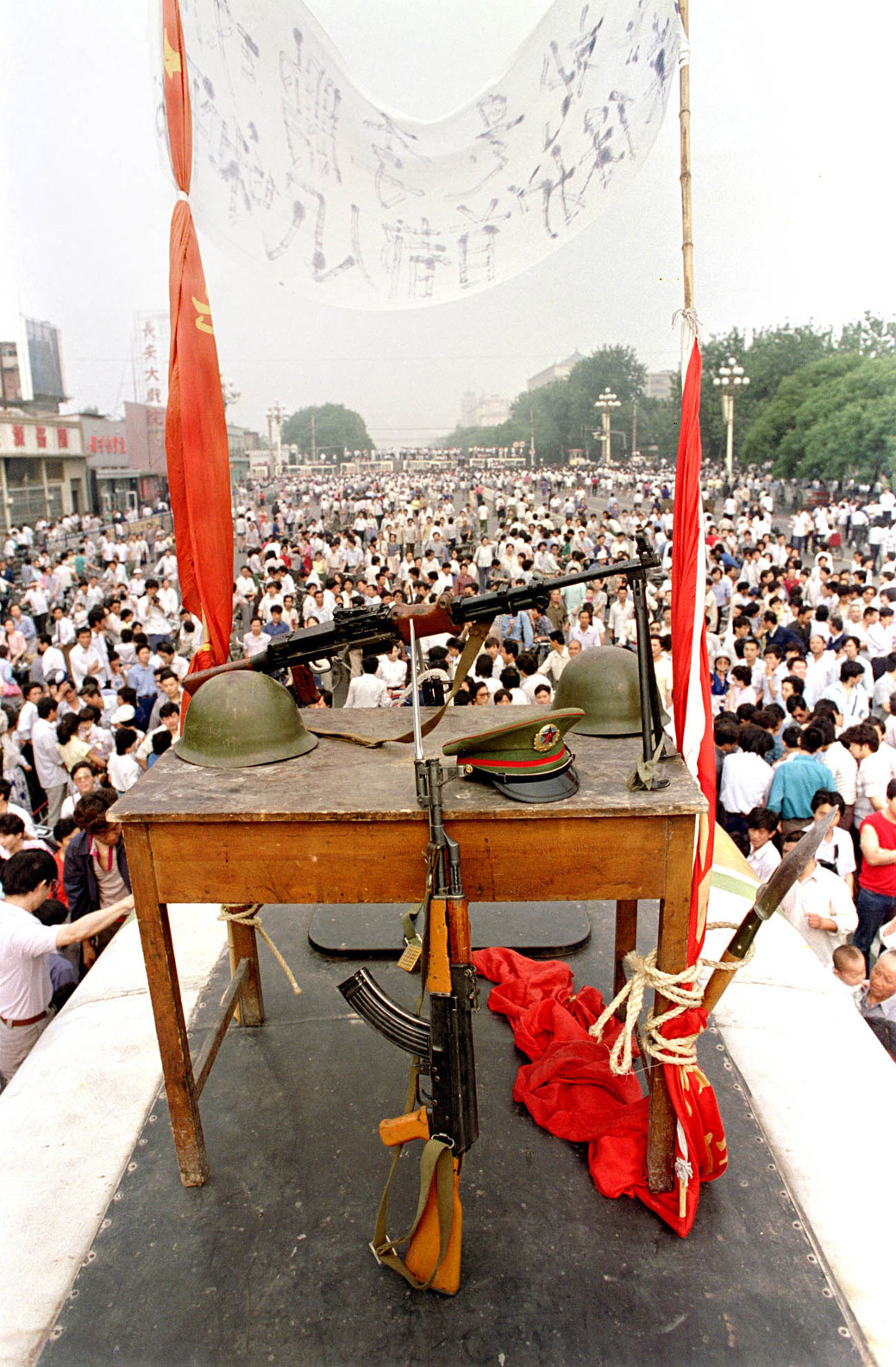 Chinese military items, including rifles, helmets and a hat, are displayed in Tiananmen Square during the pro-democracy demonstrations.

By this point, the Chinese government was trying desperately to control the message going out to the world. Several days before the crackdown began, China had made efforts to stop all American news outlets, including CNN, from broadcasting live in Beijing.

“There was always a huge risk of being arrested and having film confiscated,” Widener said.

Martsen, the student who helped Widener get into the Beijing Hotel, put the “Tank Man” film in his underwear and smuggled it out of the hotel. The pictures were soon transmitted over telephone lines to the rest of the world. 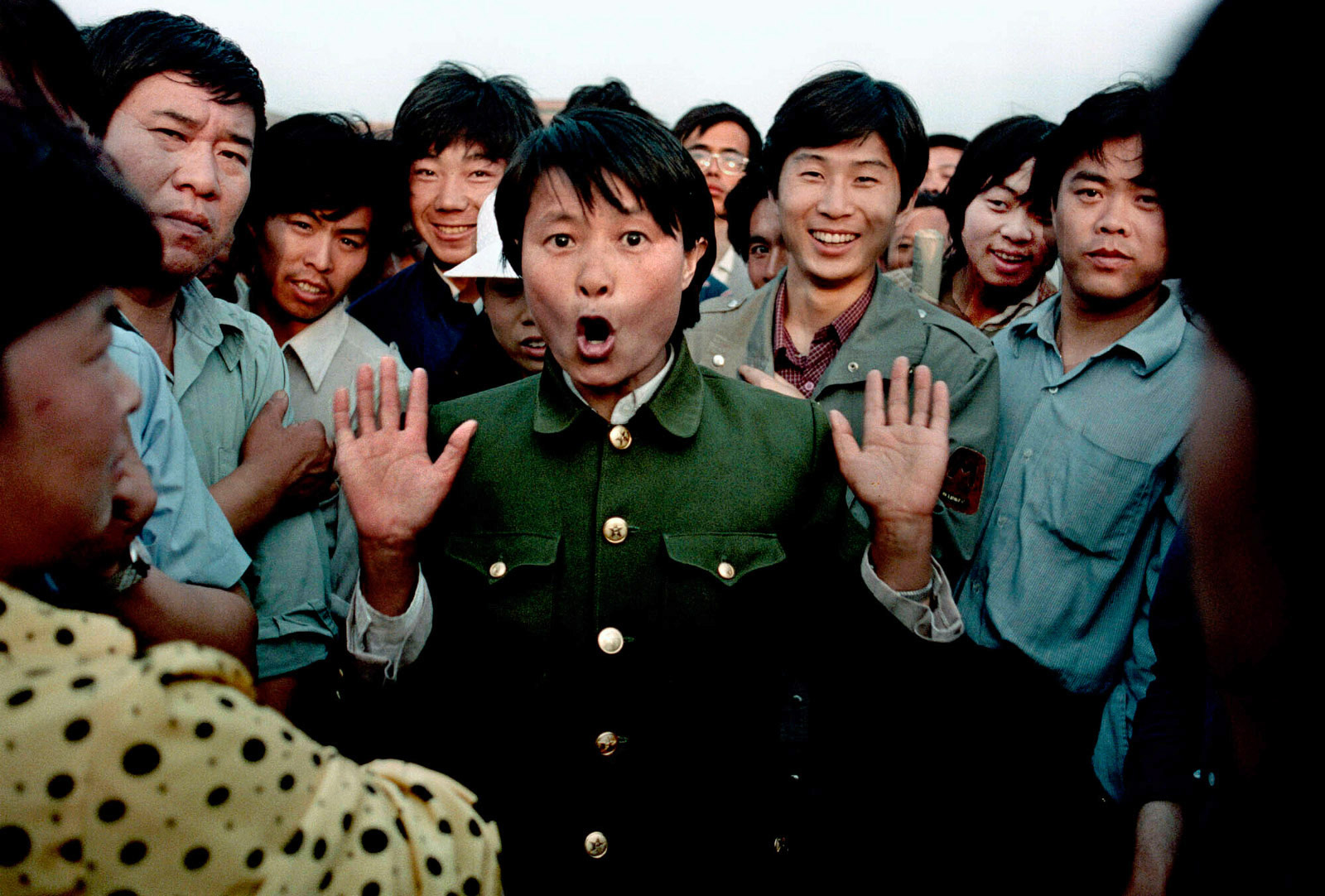 A soldier sings among pro-democracy protesters. Police and military would occasionally mix with protesters in an attempt to keep the demonstrations peaceful. 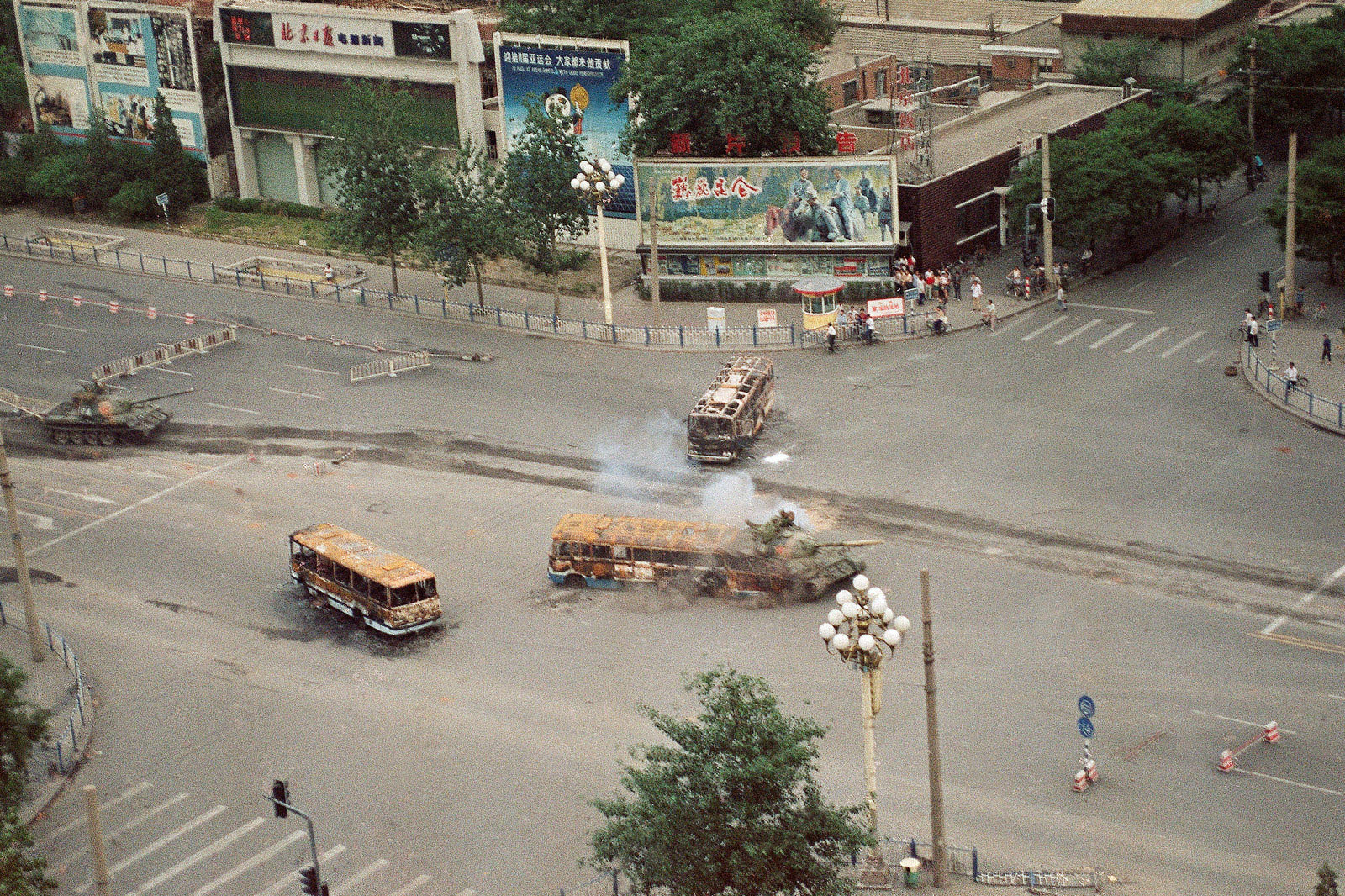 A Chinese tank crashes through a barricade of burned buses in front of the Beijing Hotel on June 6, 1989.

Several media outlets took a photo of “Tank Man,” but Widener’s shot was the most used. It appeared on the front pages of newspapers all around the world, and it was nominated that year for a Pulitzer Prize.

“Though I knew the picture was highly acclaimed, it wasn't until years later when I saw an AOL post where my image was named one of the top 10 most memorable photos of all time. That was the first time that I realized I had accomplished something extraordinary,” Widener said.

The protests in Beijing started after the death of former communist leader Hu Yaobang on April 18, 1989. Hu had worked to move China toward a more open political system, and he had become a symbol of democratic reform. Mourning students marched to Tiananmen Square to call for a more democratic government. 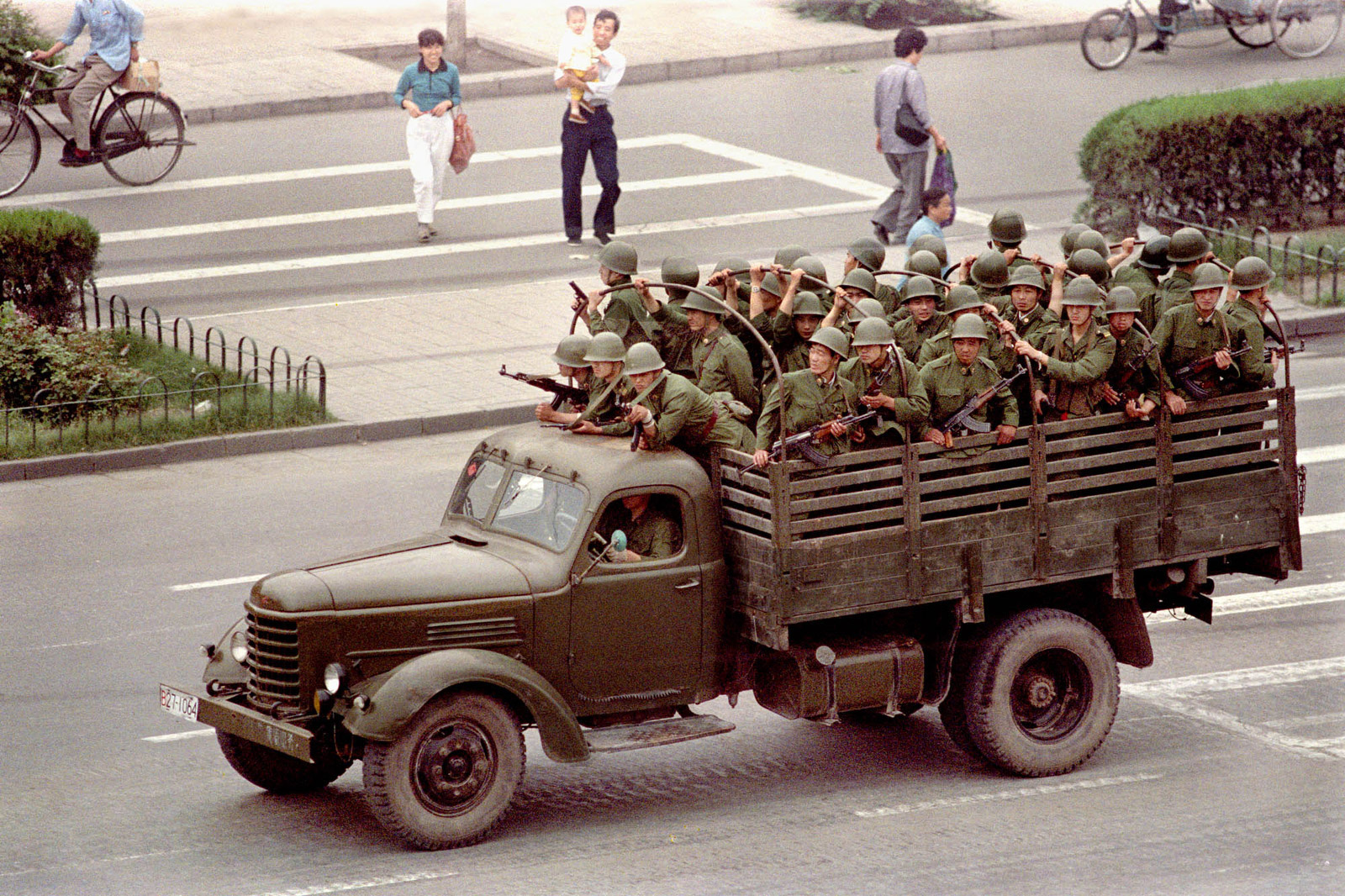 A truck drives Chinese soldiers down Beijing’s Chang'an Boulevard a day after the crackdown began. 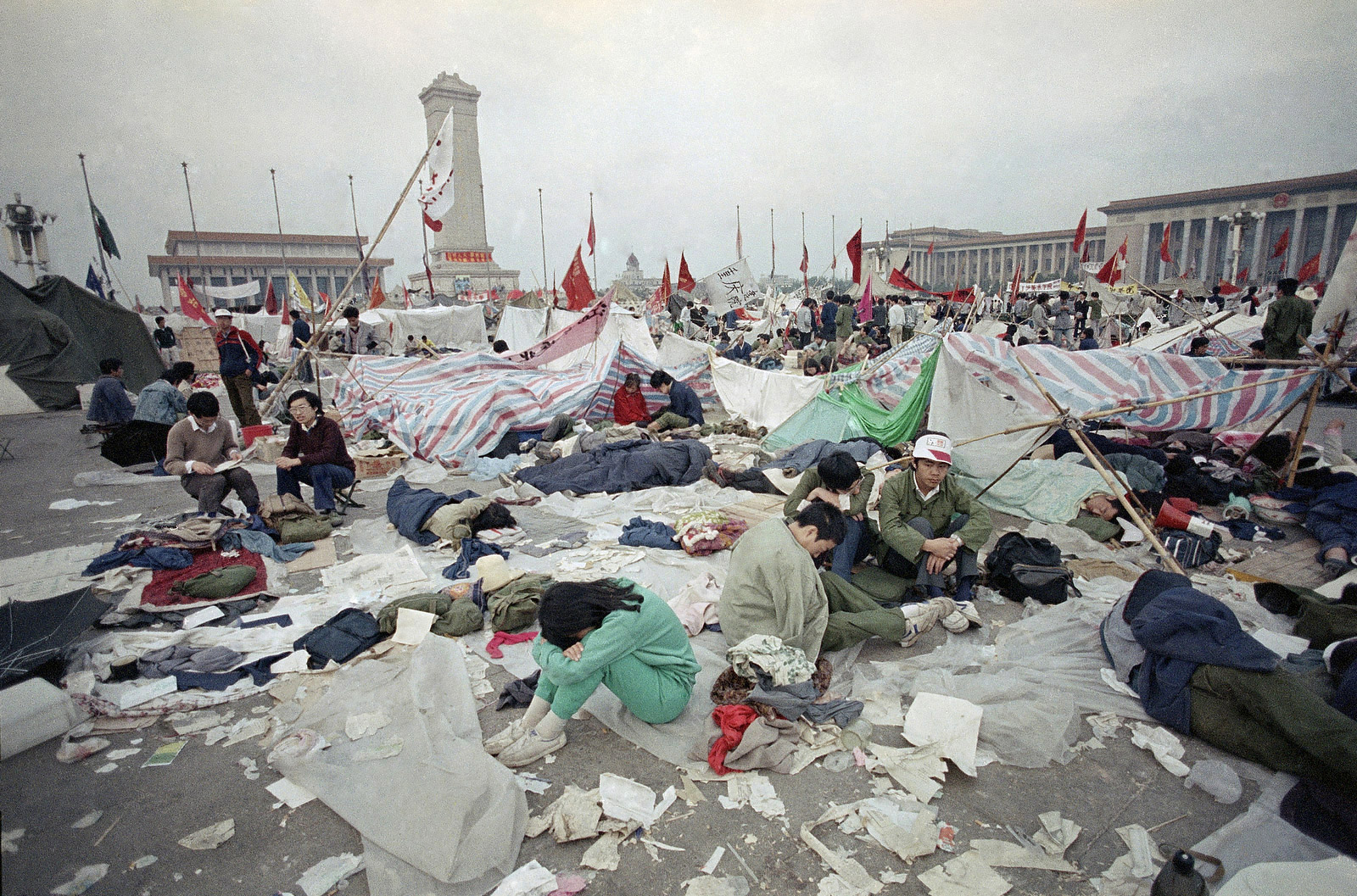 Litter surrounds students protesting in Tiananmen Square on May 28, 1989.

Thousands of people joined the students over the next few weeks to protest China’s communist rulers.

A rally on May 19 drew an estimated 1.2 million people. A 33-foot-tall statue, the Goddess of Democracy, was built in four days and placed in the square.

“There was a carnival atmosphere and a lightness in the air,” Widener recalled. “I think most of the media was swept up in the whole affair, and I personally found it amazing that there was a statue of democracy across the Chang’an Boulevard which faced off against the giant Mao portrait symbolizing communism.” 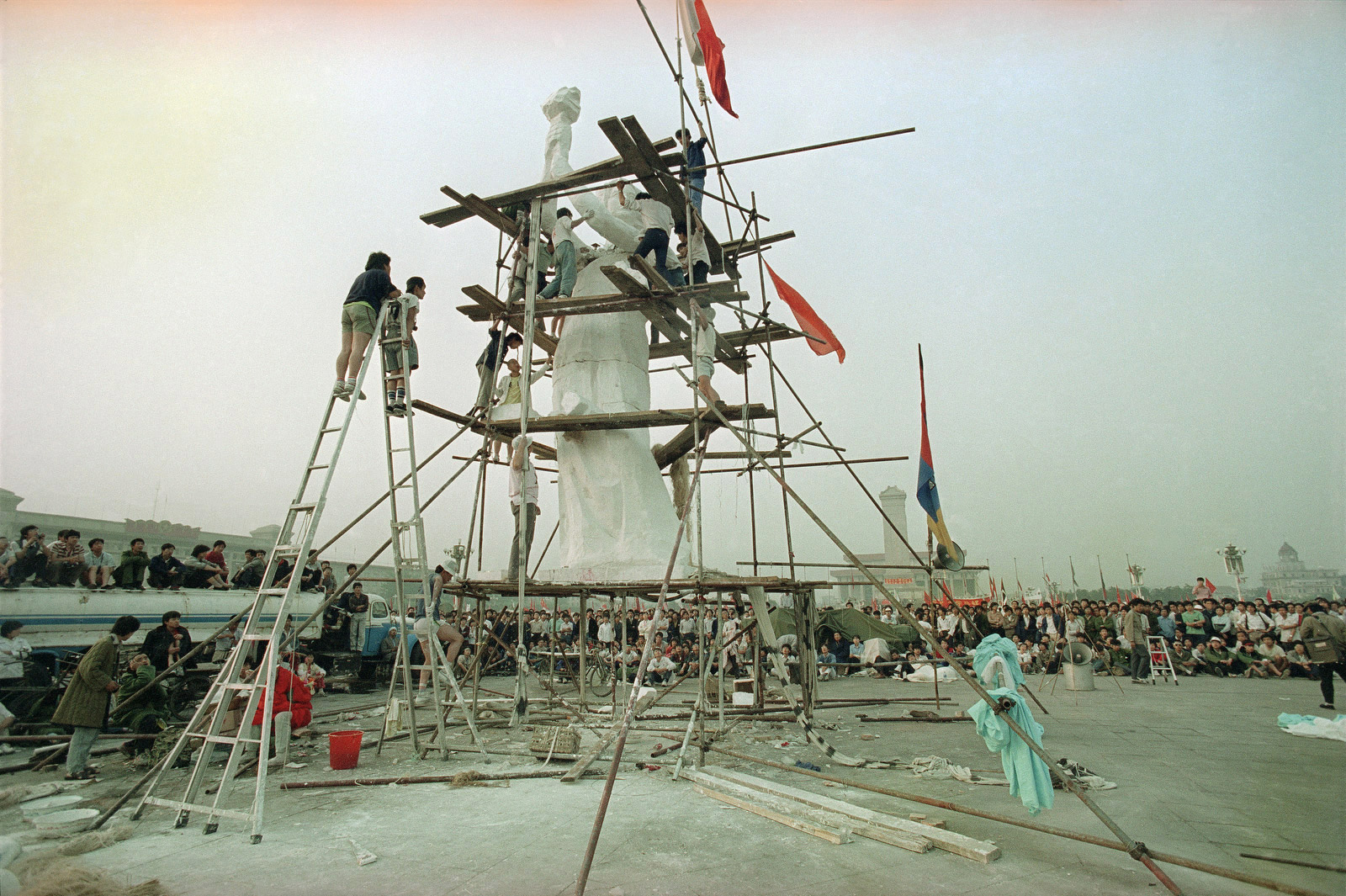 Beijing University students put the finishing touches on the Goddess of Democracy statue. 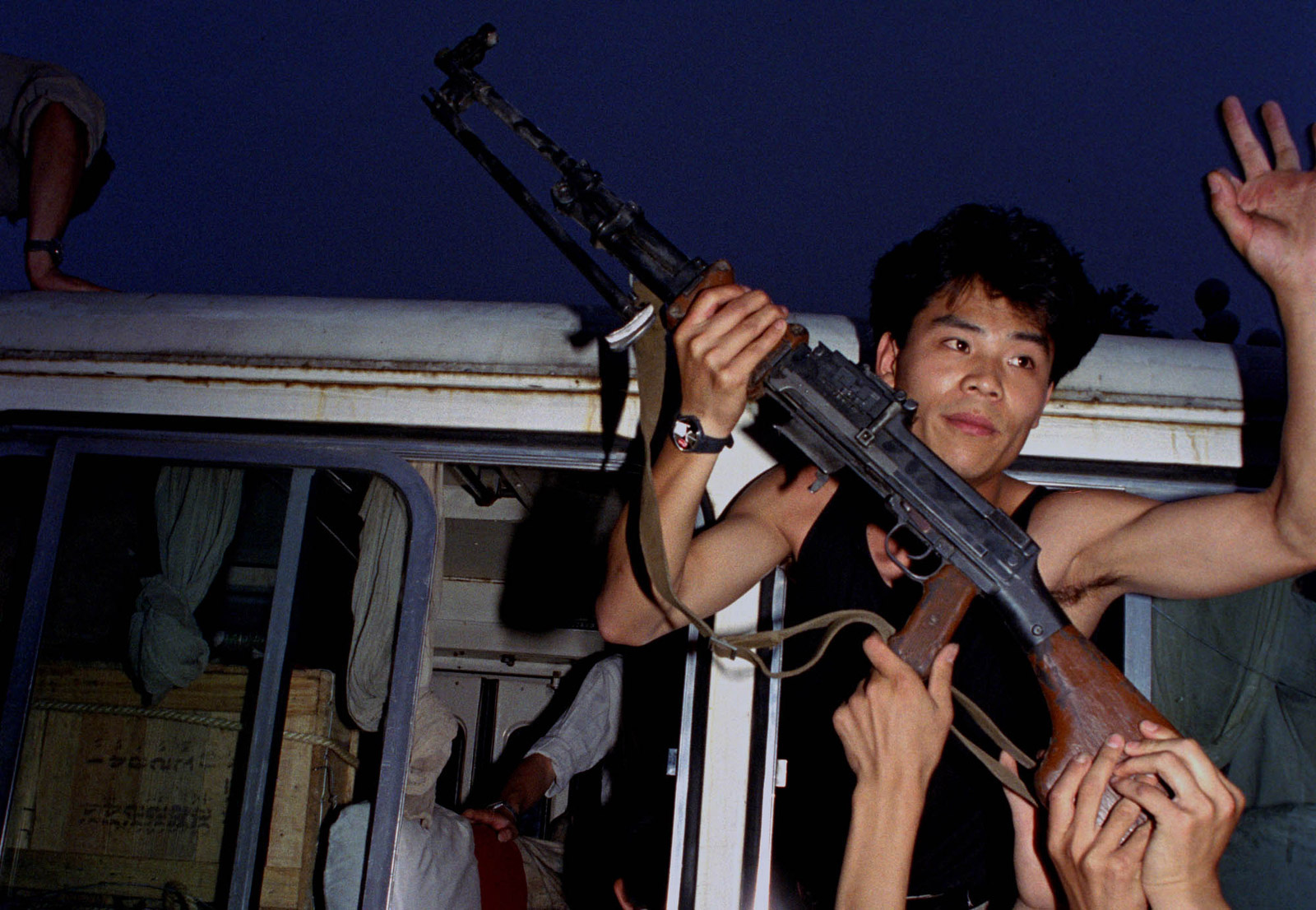 An anti-government protester holds a rifle in a bus window.

Chinese troops began firing on demonstrators at about 1 a.m. on June 4. There has never been an official death toll released. Estimates range from several hundred to thousands.

It has also been estimated that as many as 10,000 people were arrested during and after the protests. Several dozen were executed.

Widener spent a week in Beijing after the crackdown began, then he got out.

“I was sick with the flu, suffering from a head injury and scared to death when I left for the airport,” he said.

To this day, his photos — and anything referring to the massacre — are banned in China. 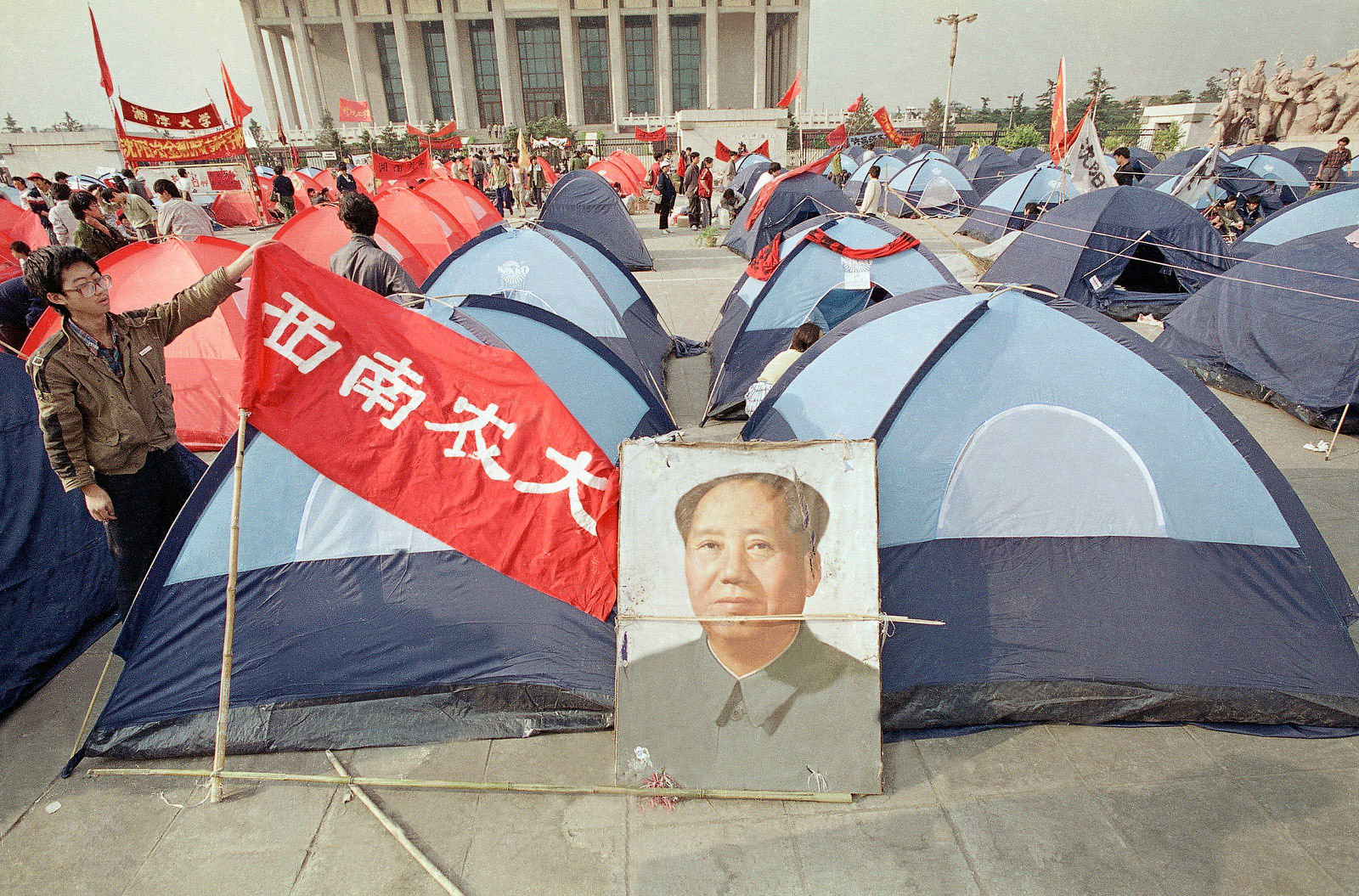 Student demonstrators decorate tents in a Tiananmen Square camp on May 29, 1989. 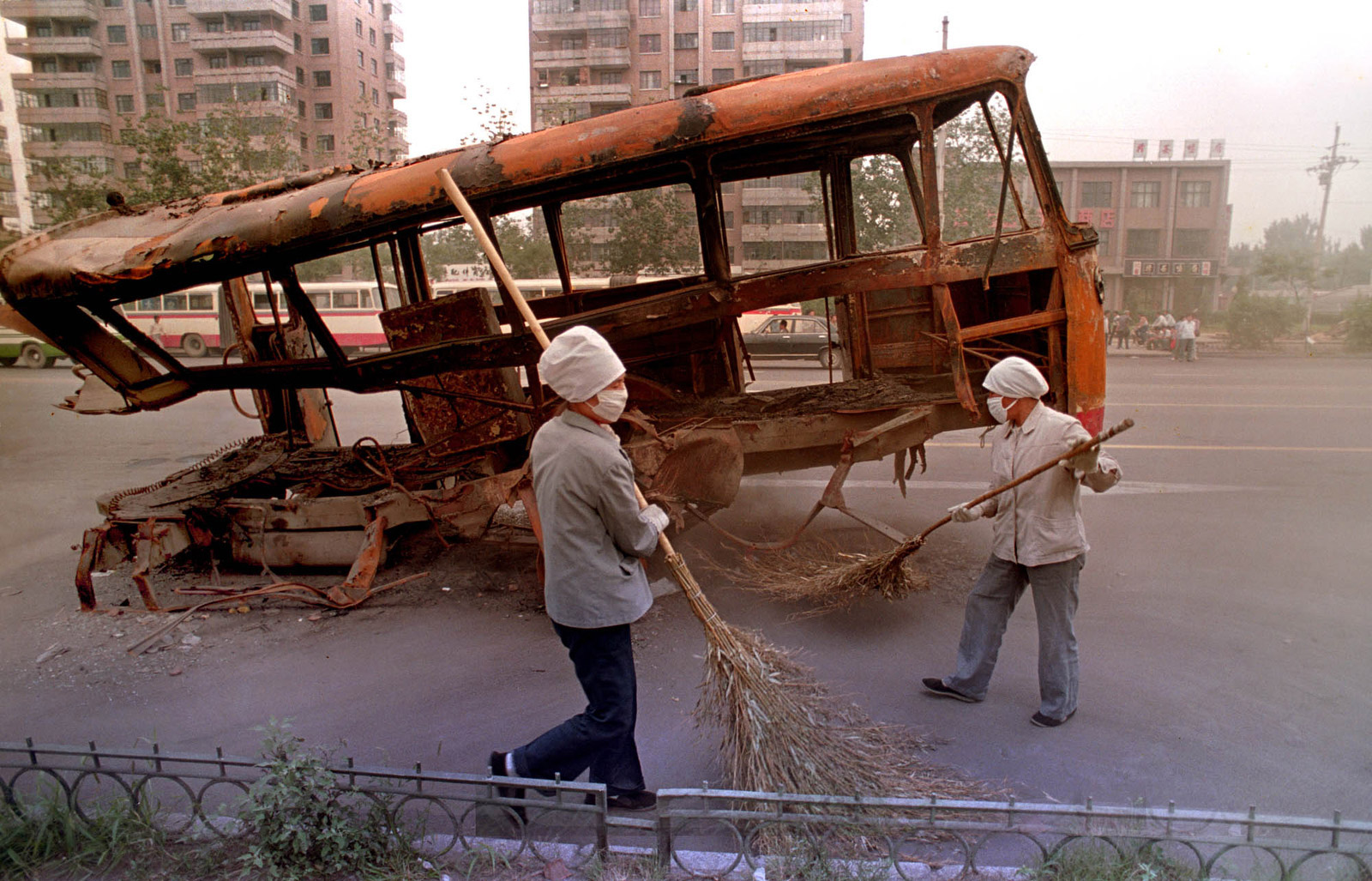 Street sweepers clean around a city bus that was burned in the violence.