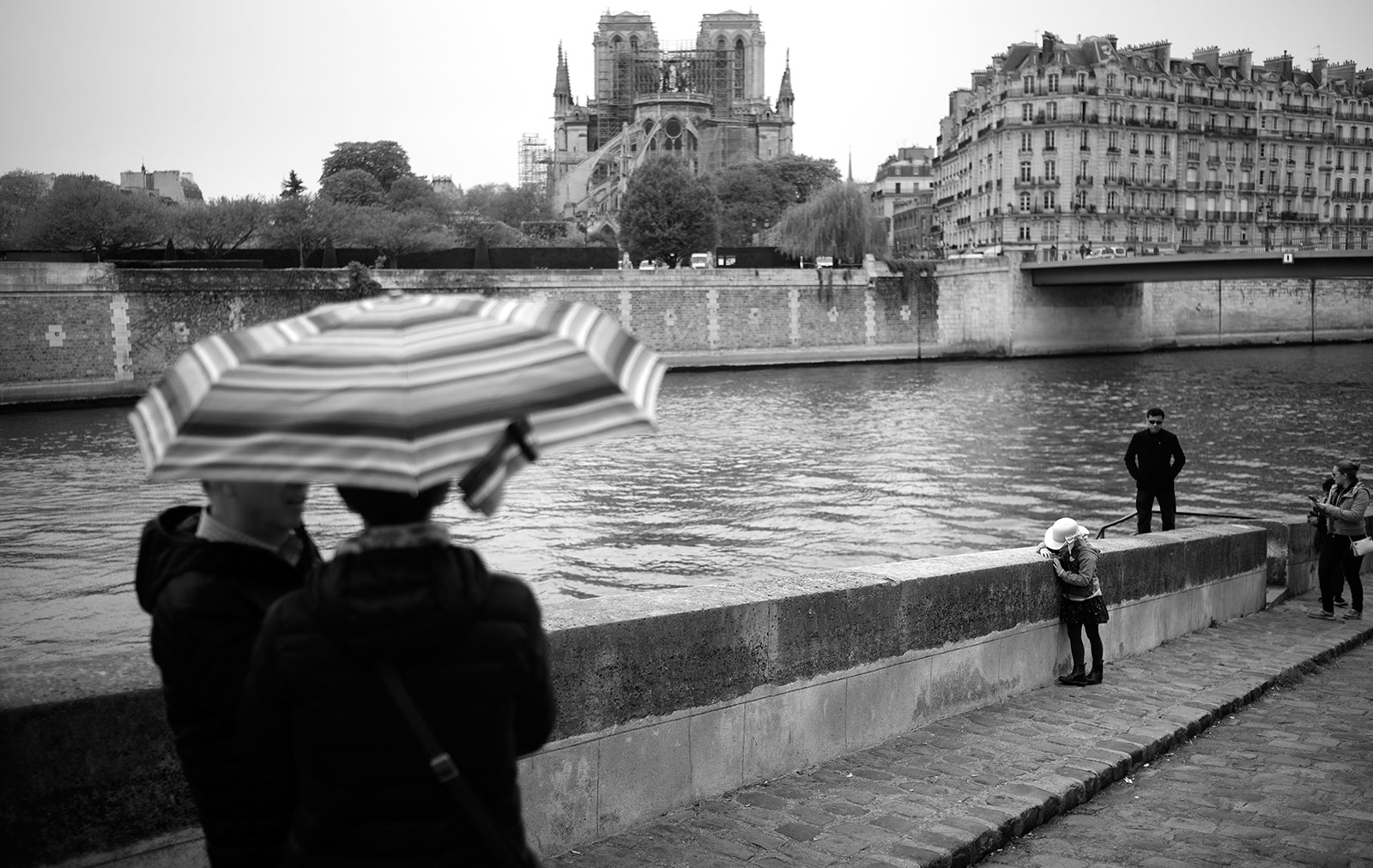 The Notre Dame Cathedral in Paris is seen from across the Seine river the day after a fire devastated the iconic church.

Paris after the smoke cleared

The Notre Dame Cathedral in Paris is seen from across the Seine river the day after a fire devastated the iconic church.

In the days after flames engulfed Notre Dame Cathedral, photographer Tomas van Houtryve took his camera through the streets of Paris and discovered a city shaken by the fire, but relieved that the church was still standing.

“I think a lot of people were really reassured the next day that the stone part of the cathedral hadn’t collapsed,” said van Houtryve of the blaze which destroyed most of the roof and toppled the spire of the 850-year-old Gothic masterpiece.

“An important symbol had been badly scarred but Paris was once again intact,” said the Belgian-American photographer, who has lived in France since 2006. “This thing of beauty that draws so many people to Paris, and makes them fall in love with it, had survived.” 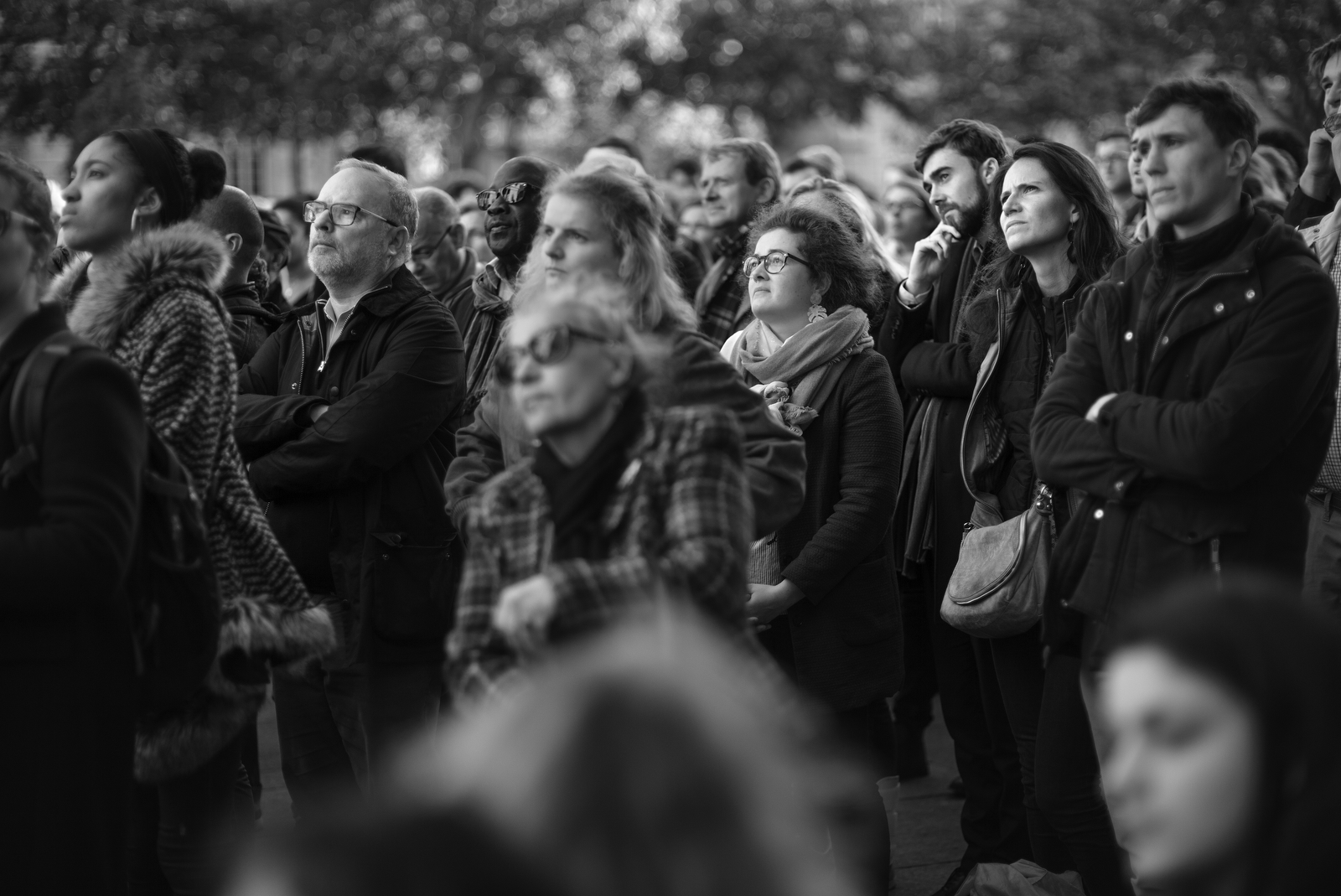 An overflow crowd attends mass in the public square in front of the Church of Saint-Sulpice during Holy Week in Paris. The mass was originally scheduled to be held in the Notre Dame Cathedral. 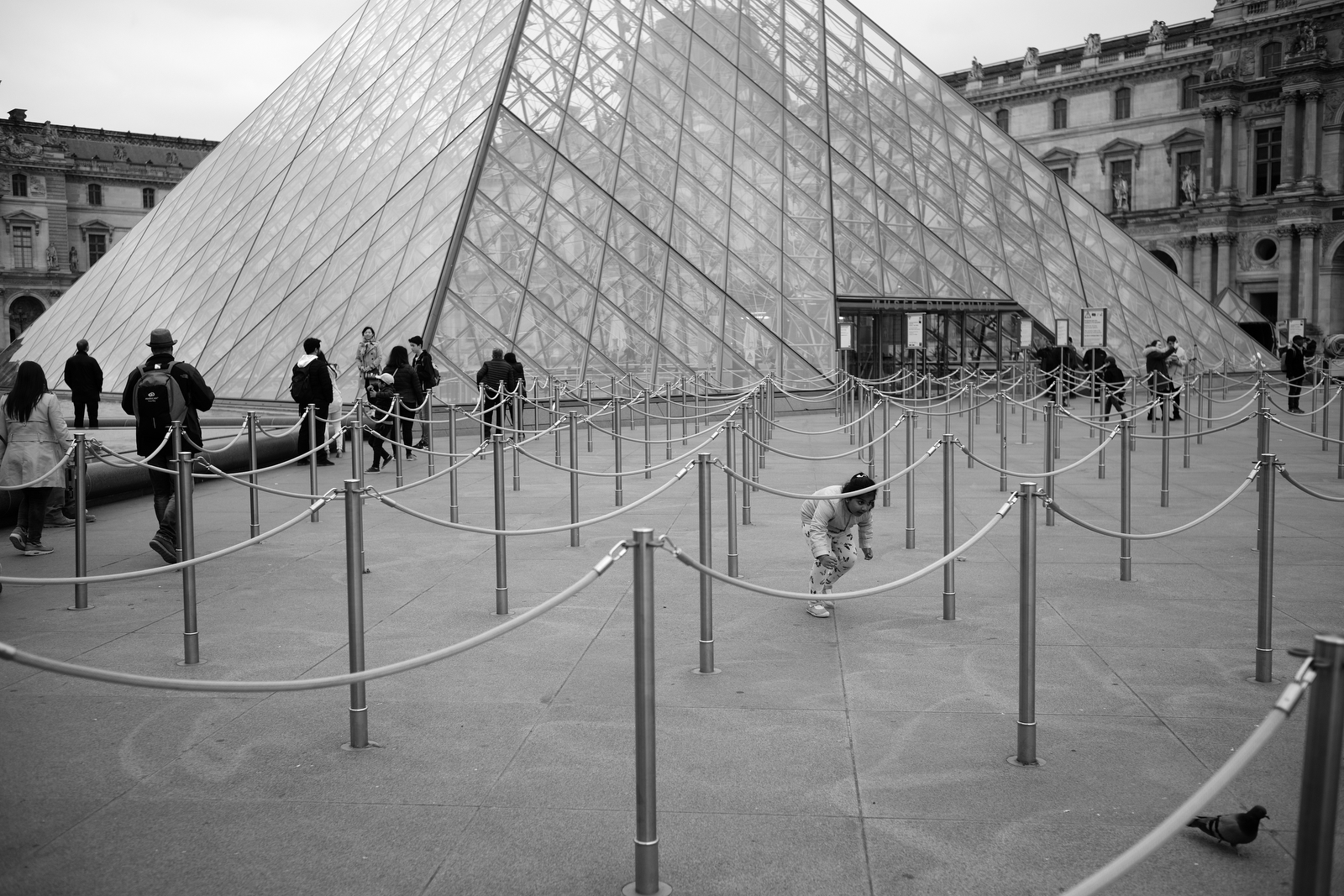 A girl chases a pigeon in front of the entrance to the Louvre museum.

Van Houtryve headed for the banks of the Seine to see the bruised, but not beaten, cathedral still watching over the river as it has done for centuries.

On Tuesday, dozens of curious onlookers had gathered near the building to see the damage for themselves. But the terror of the previous evening had given way to something more hopeful.

“Once the smoke cleared, you could see the two main towers in front, it still had its iconic shape. Aside from the steeple, it was reassuringly solid,” van Houtryve said. 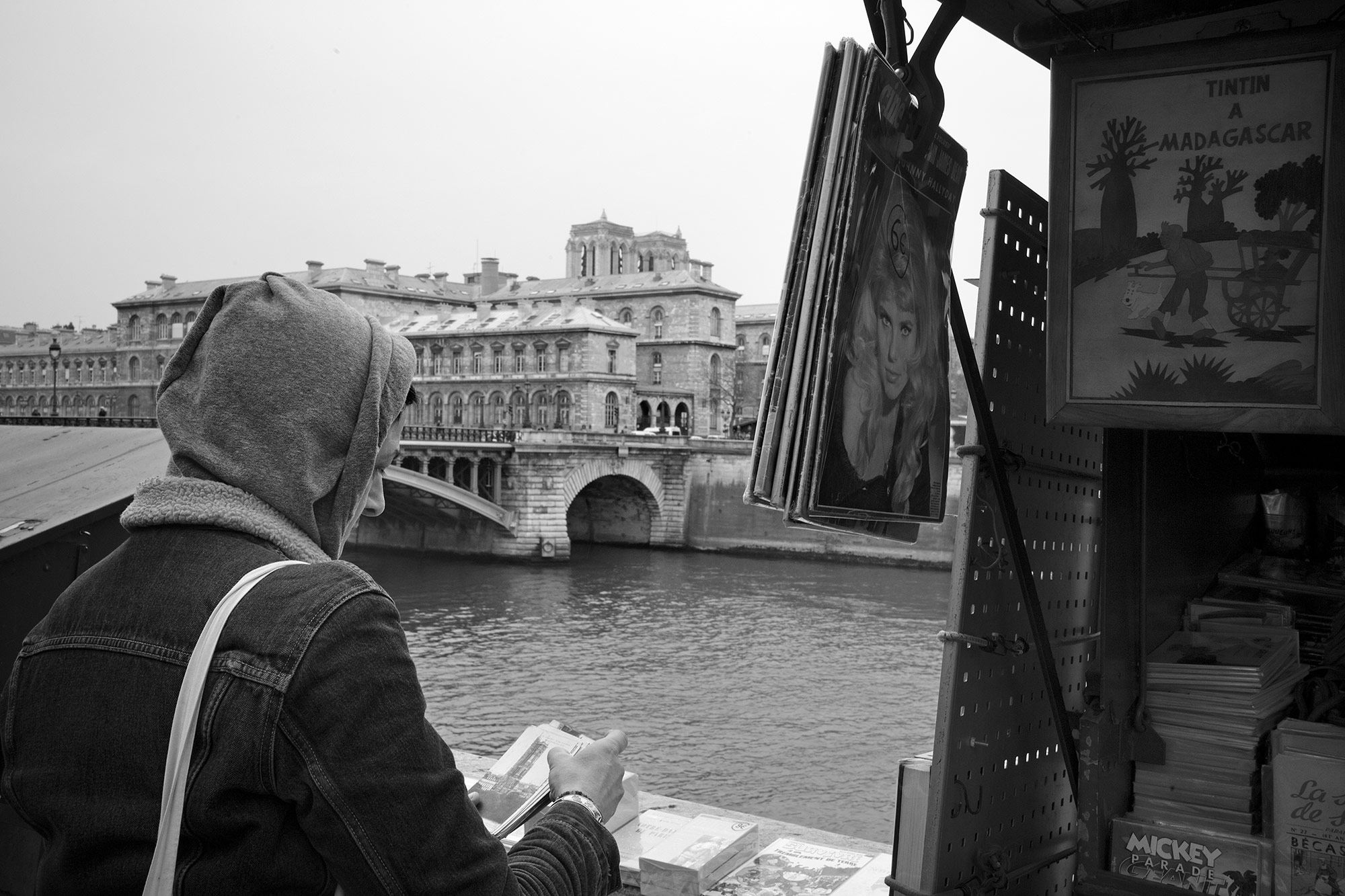 A customer looks through cards at an outdoor bookseller along the Seine. Across the river are the towers of the Notre Dame Cathedral. 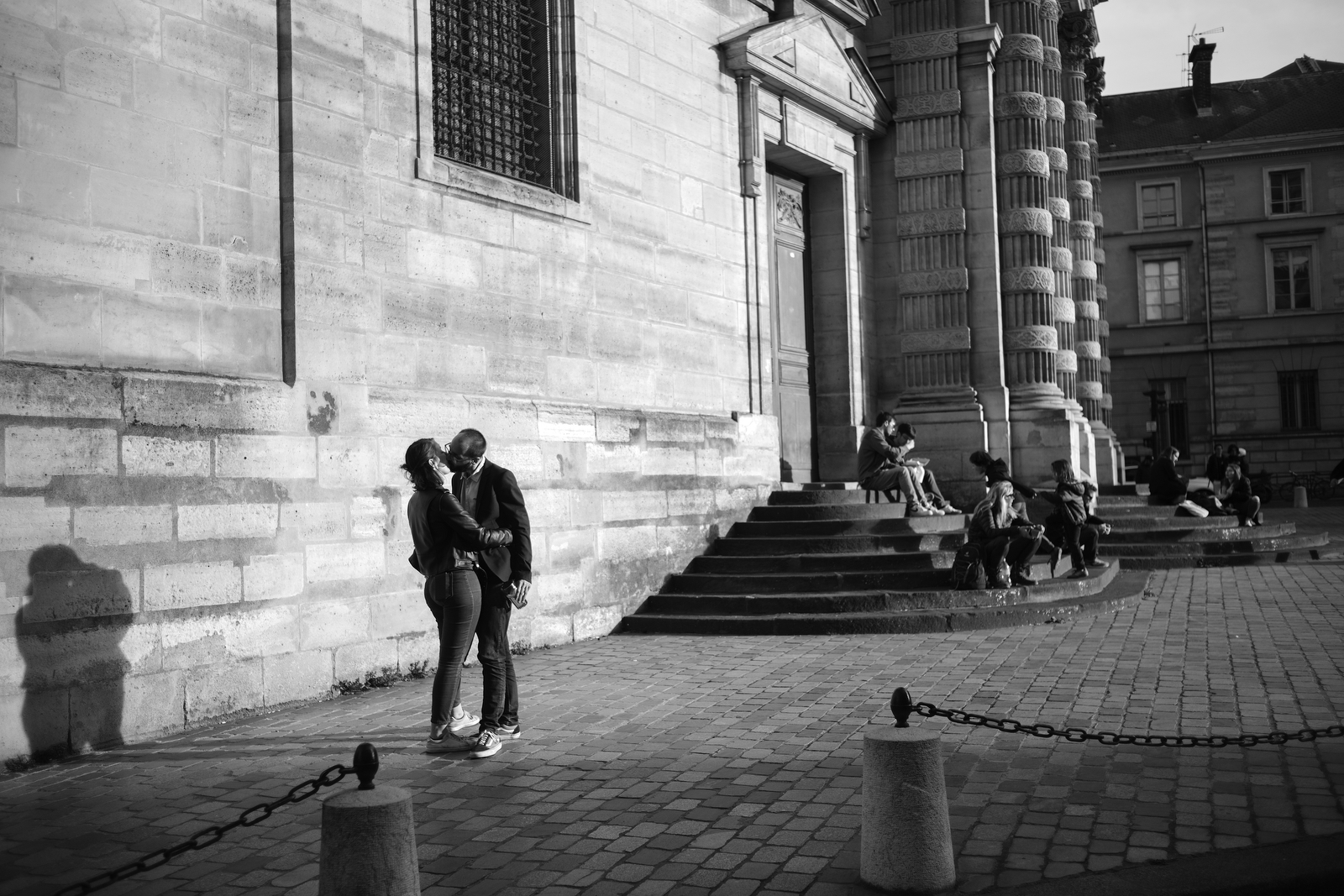 A couple kisses in front of Place Sainte-Genevieve. 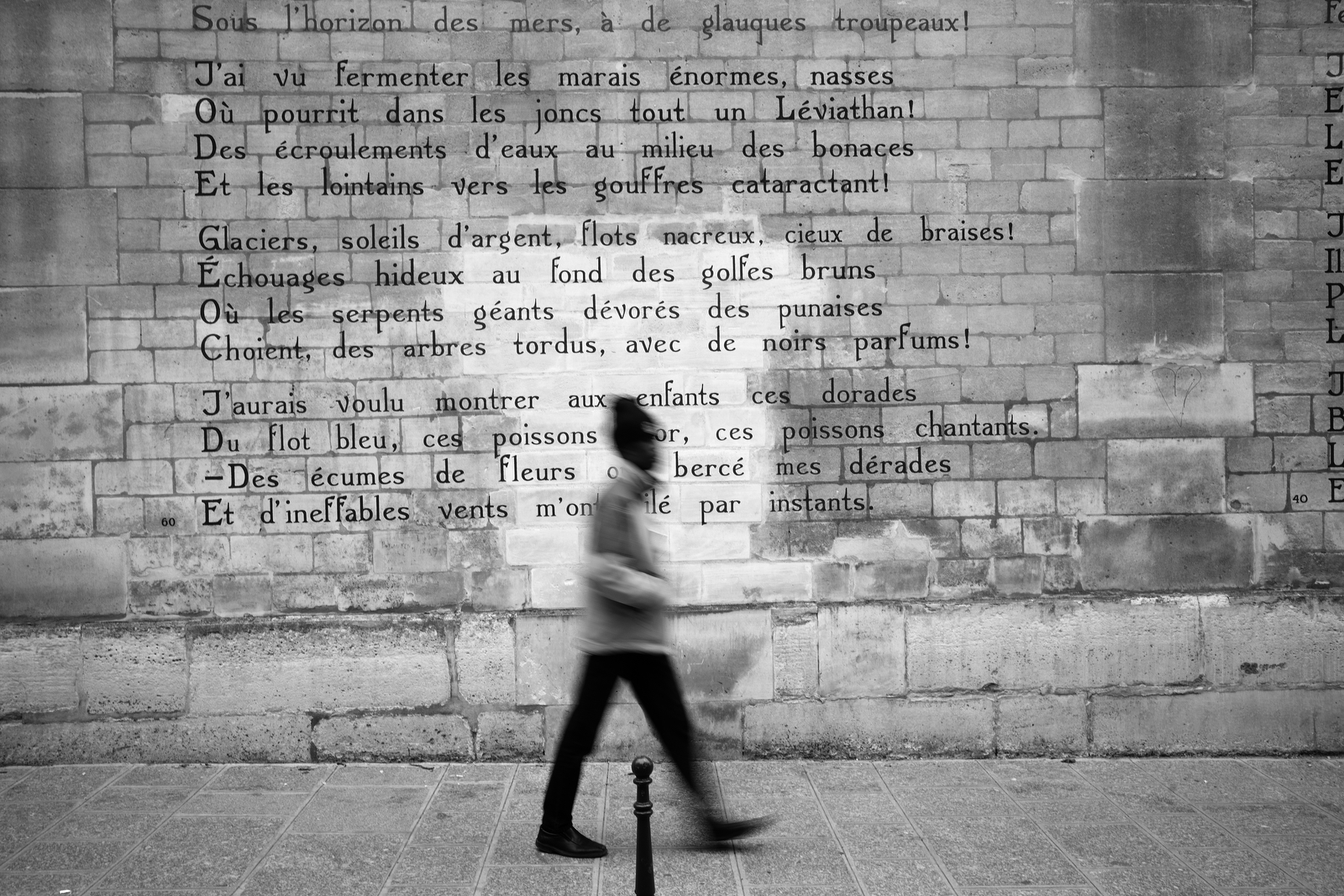 A man walks past words of “Le Bateau Ivre,” a poem by Arthur Rimbaud, on the wall of the Public Treasury at Place Saint-Sulpice.

Children playing near the Seine were more concerned with their ball than with the blackened church looming in the distance, said van Houtryve. Elsewhere, a couple posed for wedding photographs in front of the Eiffel Tower, not far from the previous evening’s blaze.

“It’s very common, especially in April and May, that Chinese couples come to Paris to get married in the spring,” explained van Houtryve. “And a very big part of that is for them to be able to get wedding pictures in front of these incredible monuments like Notre Dame and the Eiffel Tower.”

A warm spring Wednesday drove throngs of Parisians into the city’s parks to soak up the sunlight missed during the winter months. 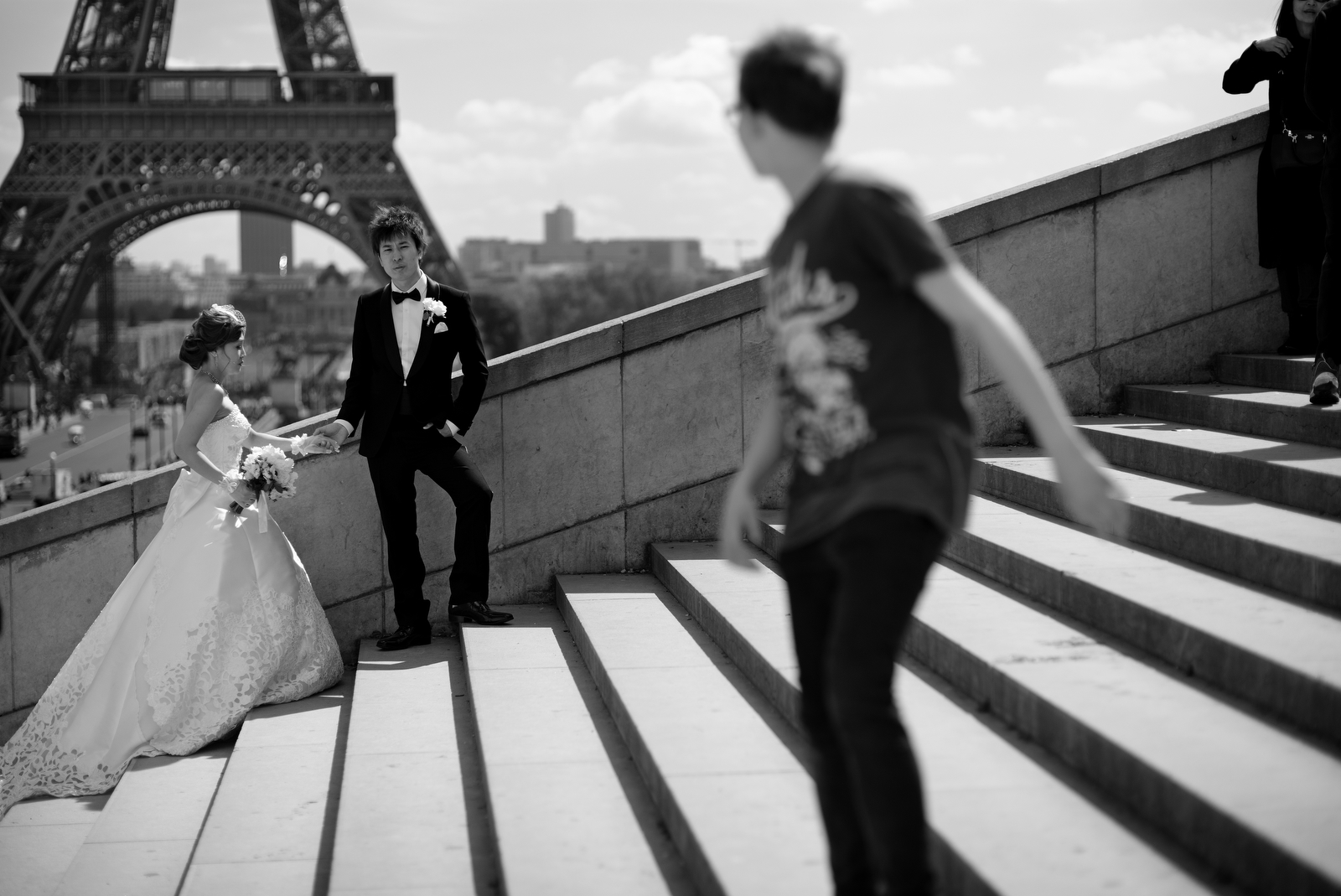 An onlooker watches as a couple dressed for their wedding prepares to pose for a picture in front of the Eiffel Tower. 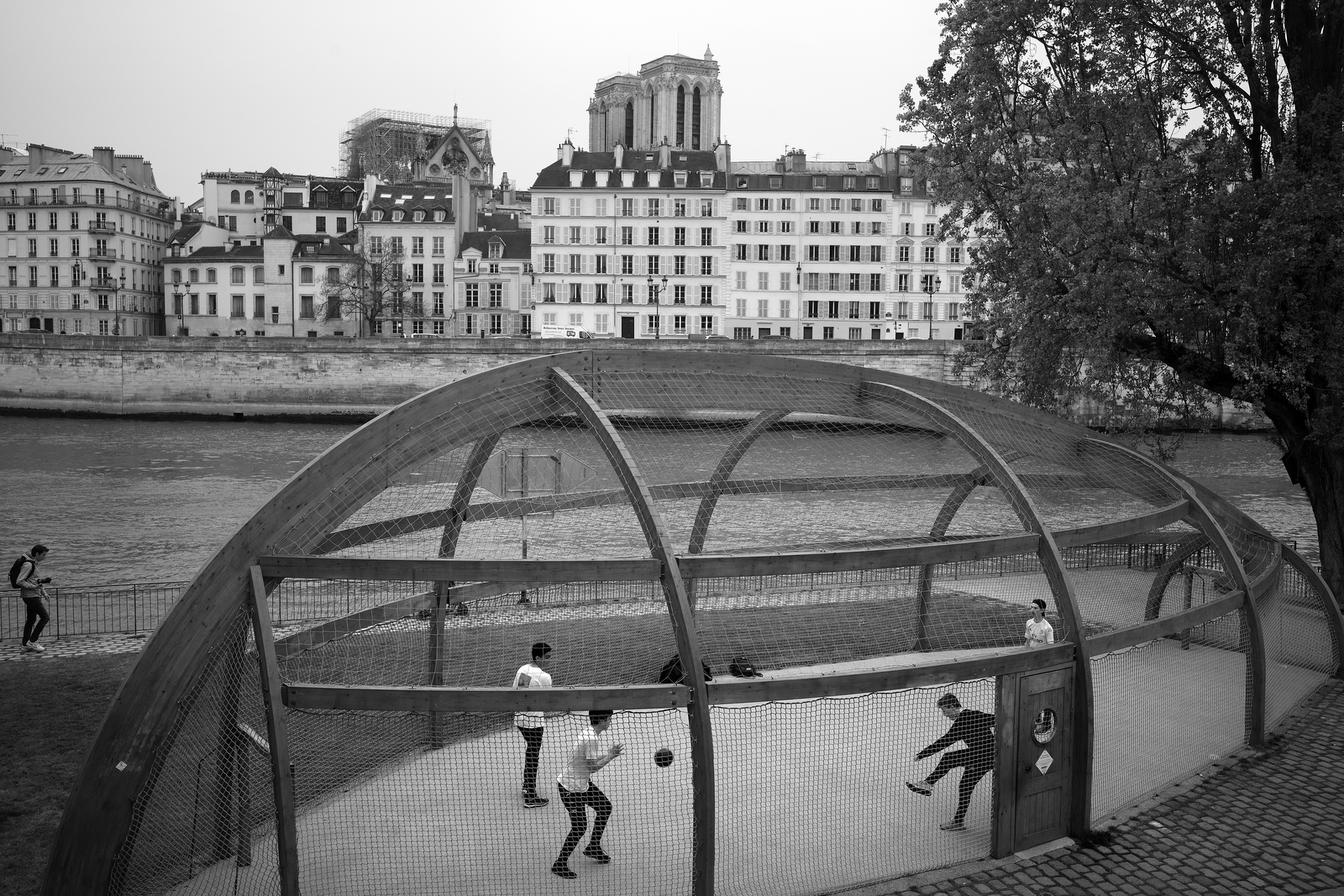 A ball game takes place along the Seine.

“There was a sense that life was getting started again,” said van Houtryve. “People were doing the normal things they have to do, like walking their dog or buying newspapers and baguettes.” His black and white images were a striking contrast to the photographs of orange flames leaping from the capital’s beloved cathedral only days before.

Van Houtryve said it was the “classic street photos of Paris taken in the 1930s that seduced me to this city,” though he admitted that there was a distinction between Paris “as an idea” and Paris “as a real place that you live.”

“I think the fire was incredible as a symbol — but as far as daily life goes, in Paris it was actually less catastrophic than you would imagine,” he said. 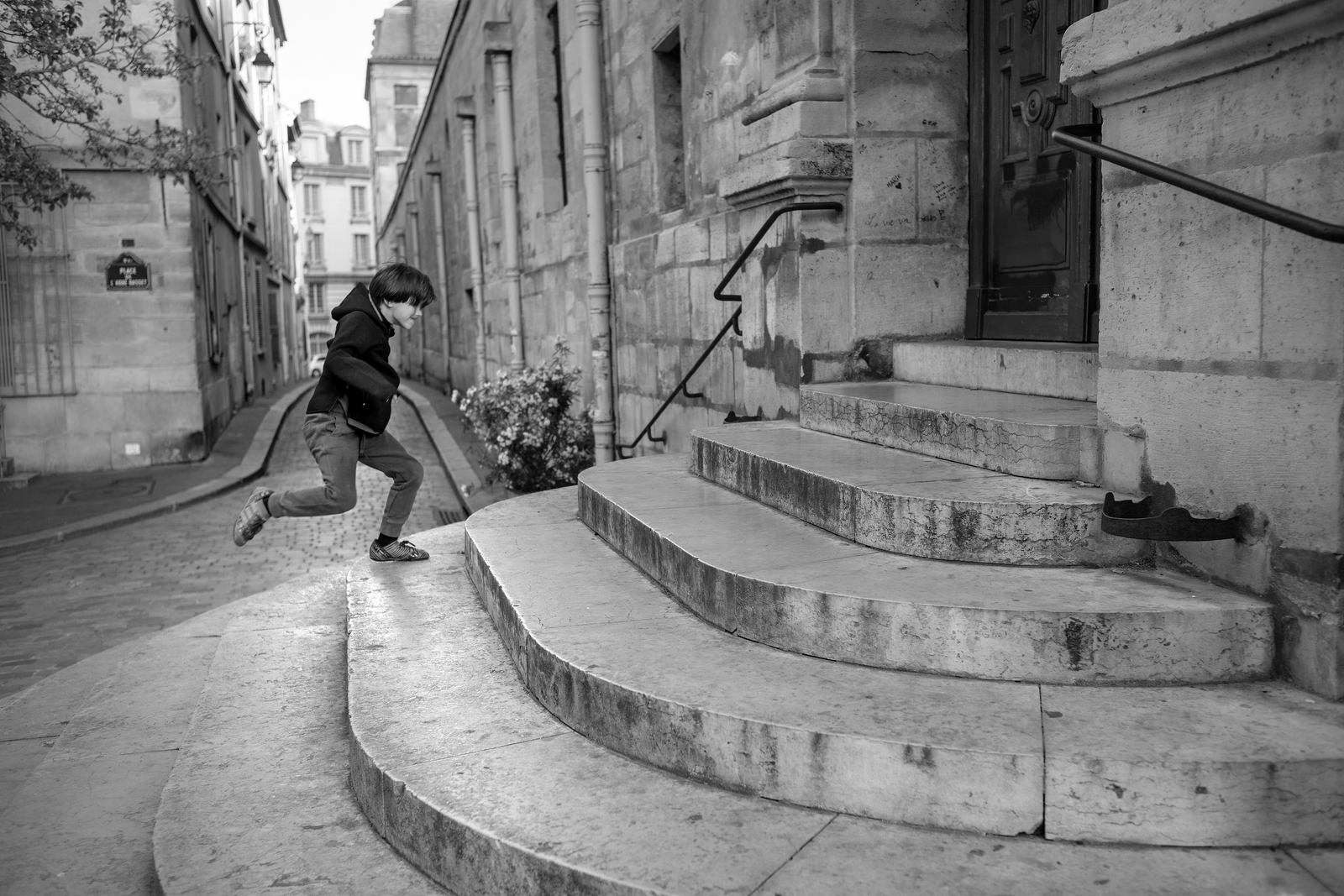 A boy jumps up the stairs of the Church of Saint-Étienne-du-Mont. 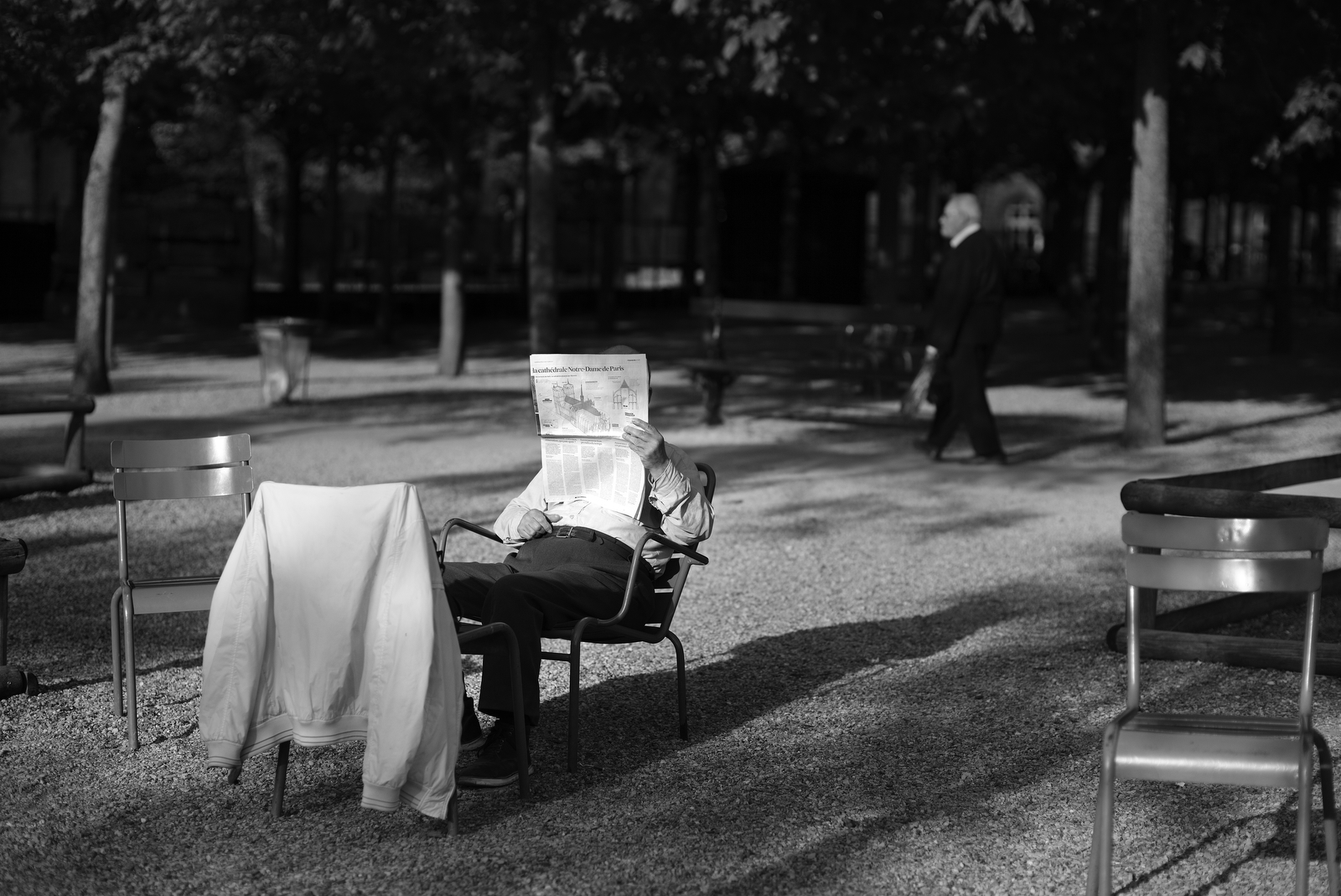 A man in the Luxembourg Gardens of Paris reads newspaper coverage of the aftermath of the fire.

Tomas van Houtryve is a Belgian-American photographer who lives in Paris. He is represented by the VII Photo Agency.