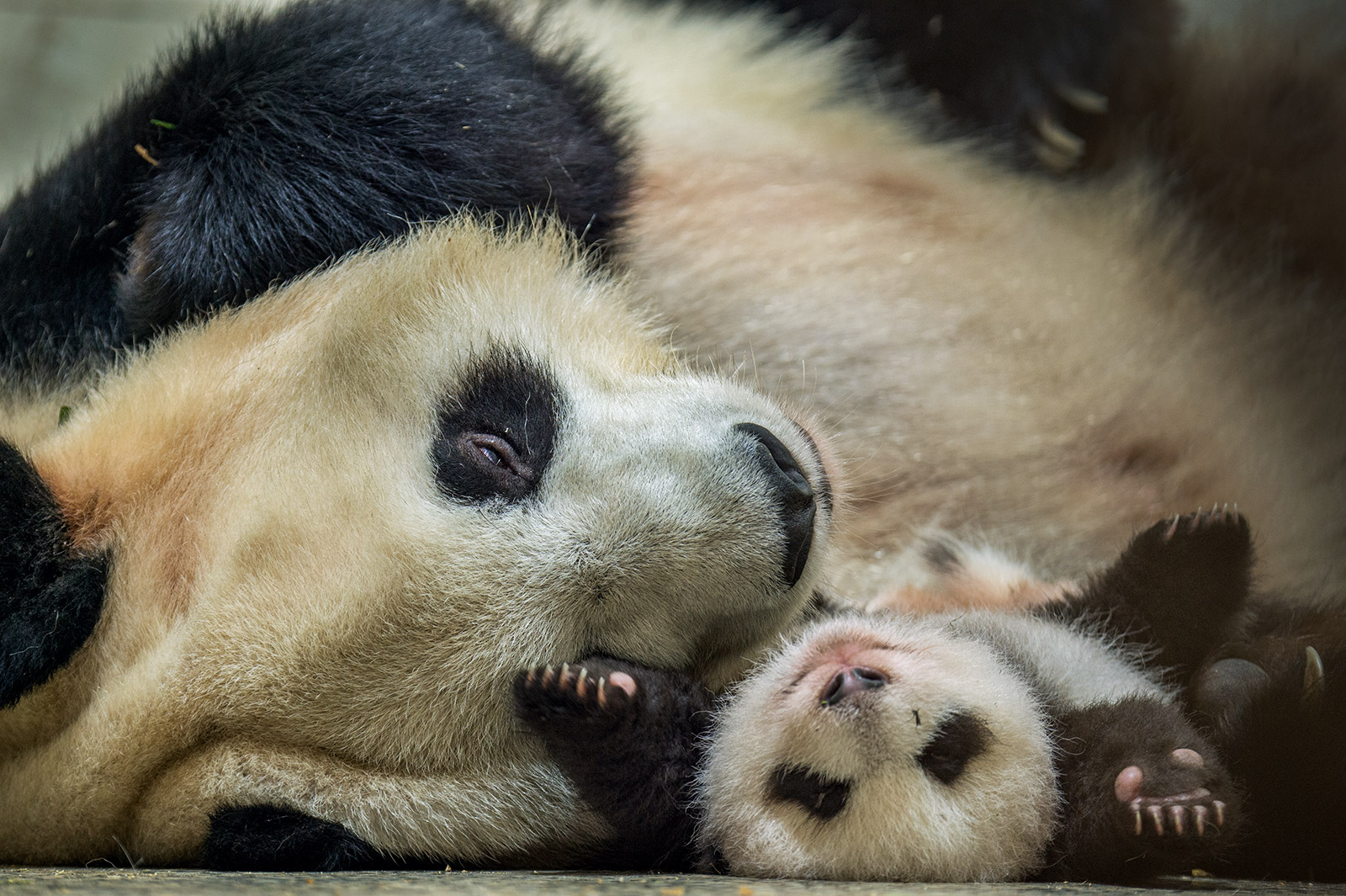 How pandas are making a comeback

For decades, the giant panda has frustrated scientists desperate to save the species from extinction.

The iconic bears, native to China and beloved around the world, have been famously hard to breed.

But after years of trial and error, things are starting to turn around. The wild panda population is rising, and the species was recently taken off the endangered list, largely thanks to the efforts of Chinese conservationists.

“They sort of cracked the code,” said photographer Ami Vitale, whose new book “Panda Love” documents the country’s efforts to breed pandas in captivity and release them into the wild. 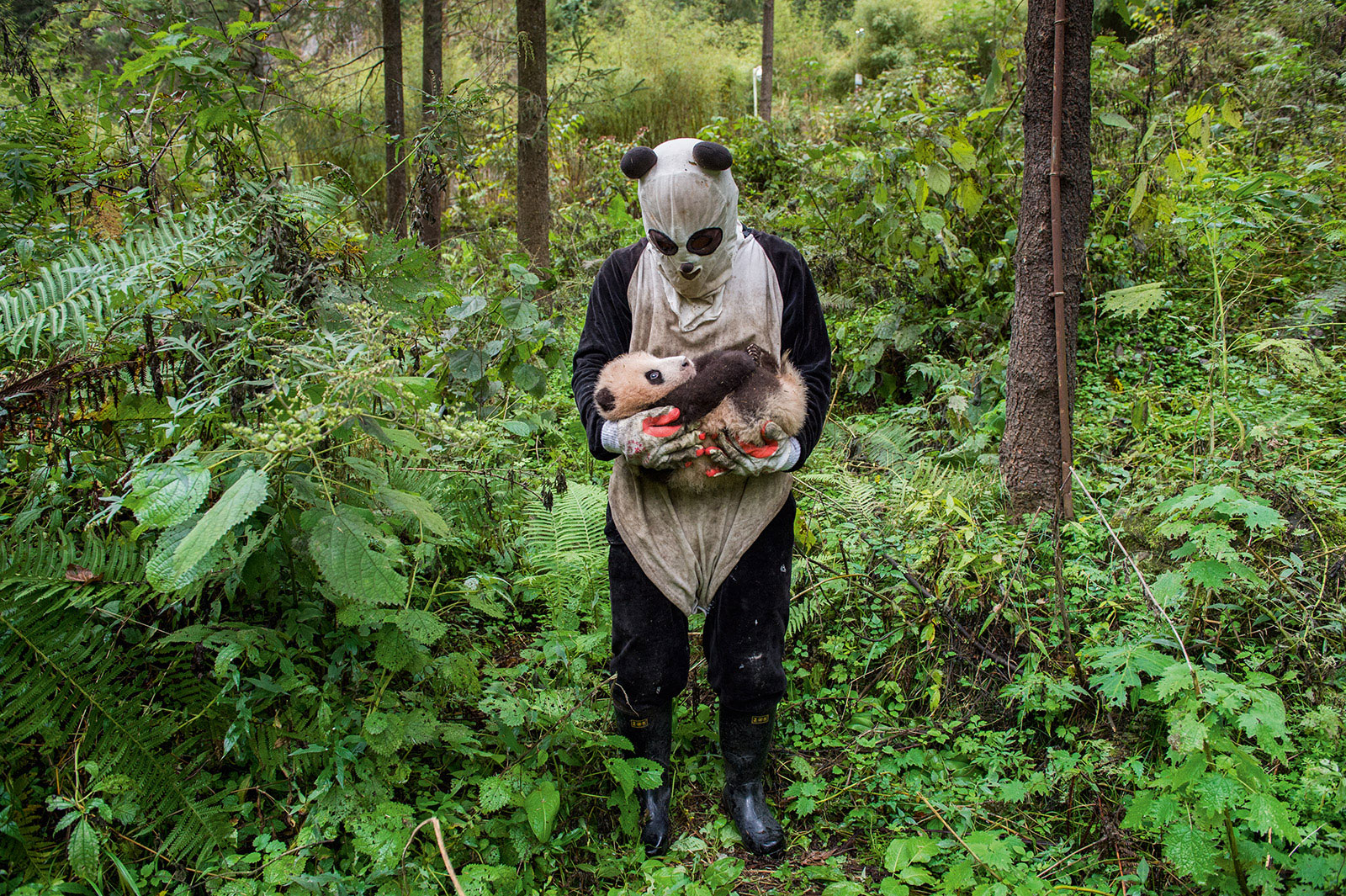 A panda keeper checks on a cub at the Wolong Nature Reserve in China’s Sichuan Province.

Vitale, a photographer for National Geographic magazine, got unprecedented access to Chinese facilities dedicated to saving the panda. There, keepers wear panda costumes sprayed with panda urine and feces to mask their human scent.

“It looks so funny on the surface, but it's serious work, too,” Vitale said.

The idea is to limit the bears’ familiarity with humans as much as possible so that they can be conditioned to survive in the wild. 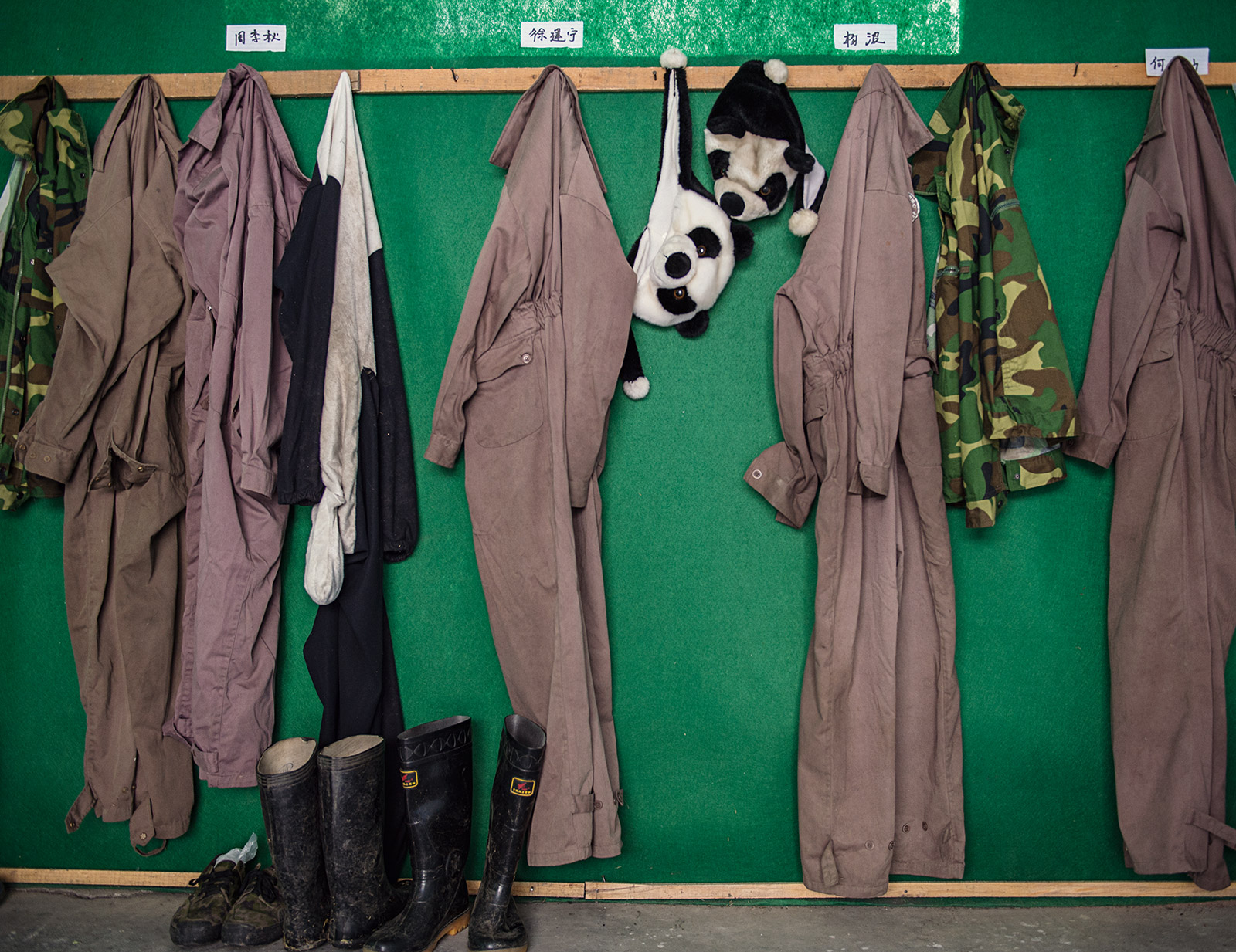 The keepers wear panda costumes to help prevent the bears from growing too comfortable with humans.

“One was that female pandas only have 24 to 72 hours — in a year — to get pregnant. That's it. So their window of opportunity is really small,” she said. “And then the second thing is, they need to give them choice.”

You can’t just throw a male panda into an enclosure with a fertile female panda and expect fireworks. These ladies are looking for that special someone, and it’s often all about the smell.

“They'll take the female out of the enclosure, then they'll put the male in,” Vitale said. “And he will literally do handstands: He'll get up on his hands and pee on trees so that it reaches her nose height. If she likes (the smell), they'll put him next to her in a different enclosure so they can smell each other.” 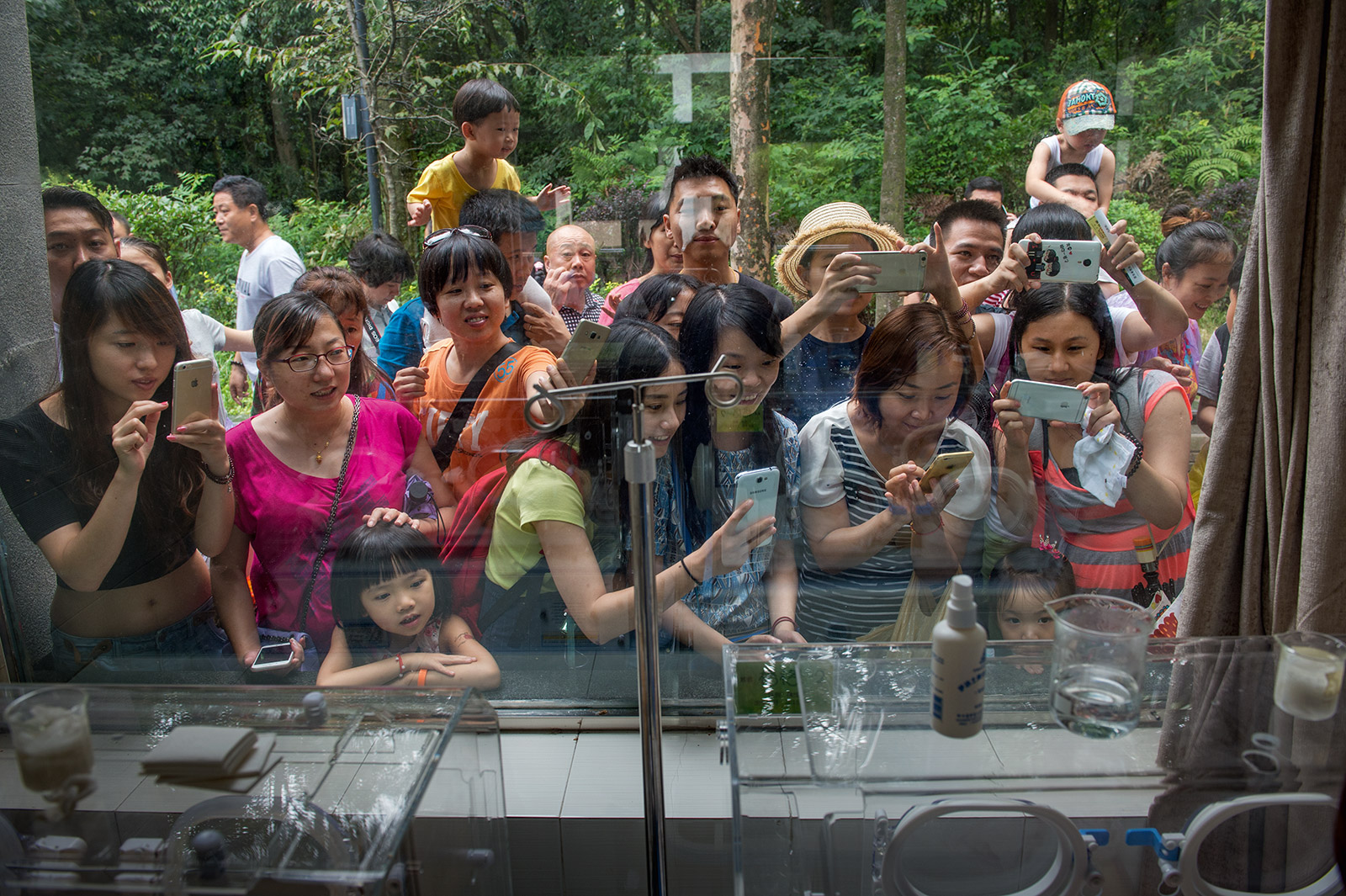 People break out their cameras to get a photo of baby pandas in an incubator room. 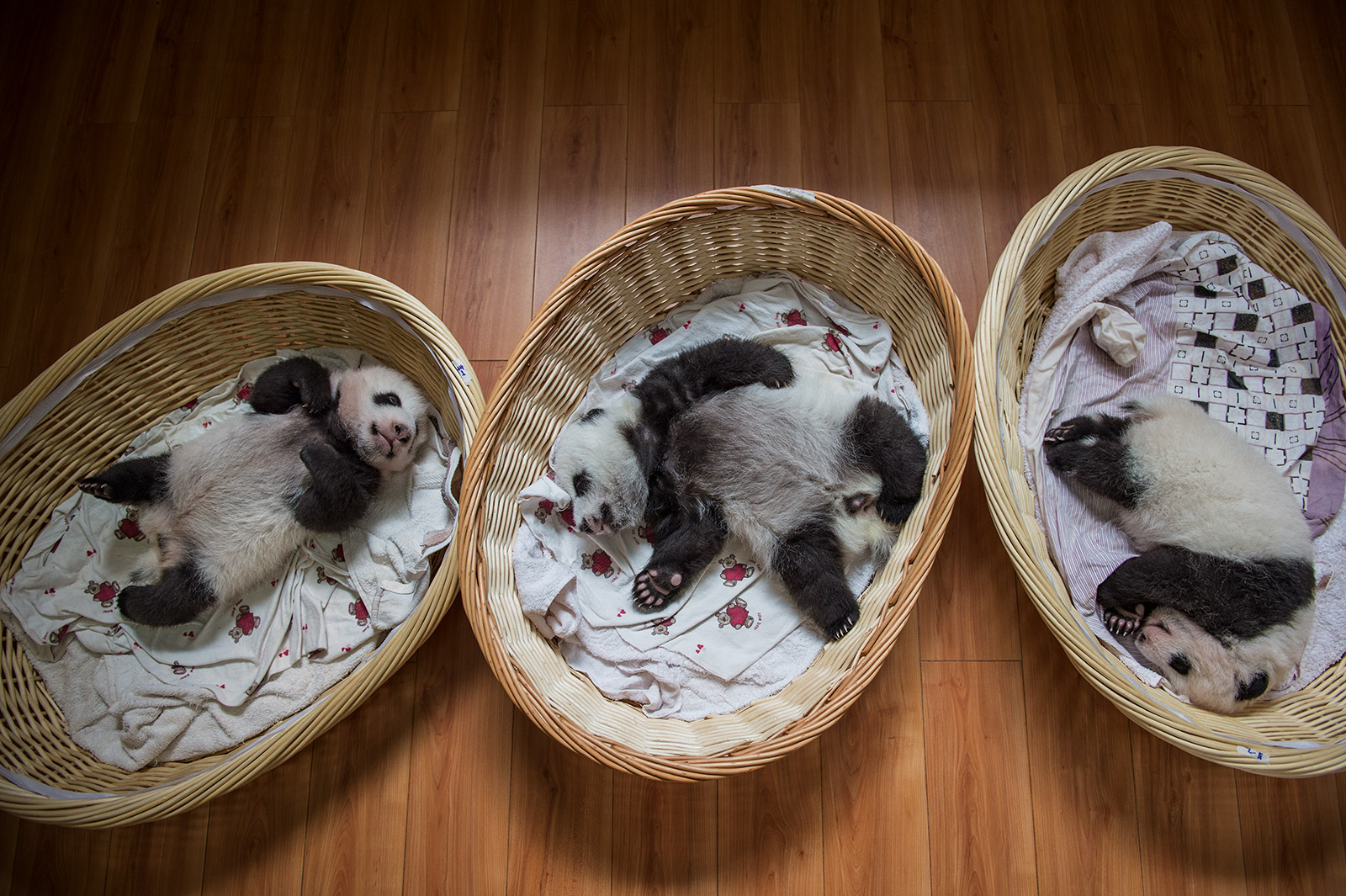 Artificial insemination is common at the facilities Vitale visited. Endocrinologists monitor the female’s hormones to tell when she’s ovulating, and sometimes sperm from two males is used to try to get the job done.

When successful, about half of all panda births produce twins, Vitale said.

Mama pandas can only care for one cub at a time — these blind, hairless creatures need constant attention in the beginning.

In the wild, the mother would just take the strongest one and let the weakest one die. But because every cub these days is so important, the conservationists in China have come up with an elaborate swapping system — they’ll have a human nanny nurture a cub for half the time and then swap it with the other cub. 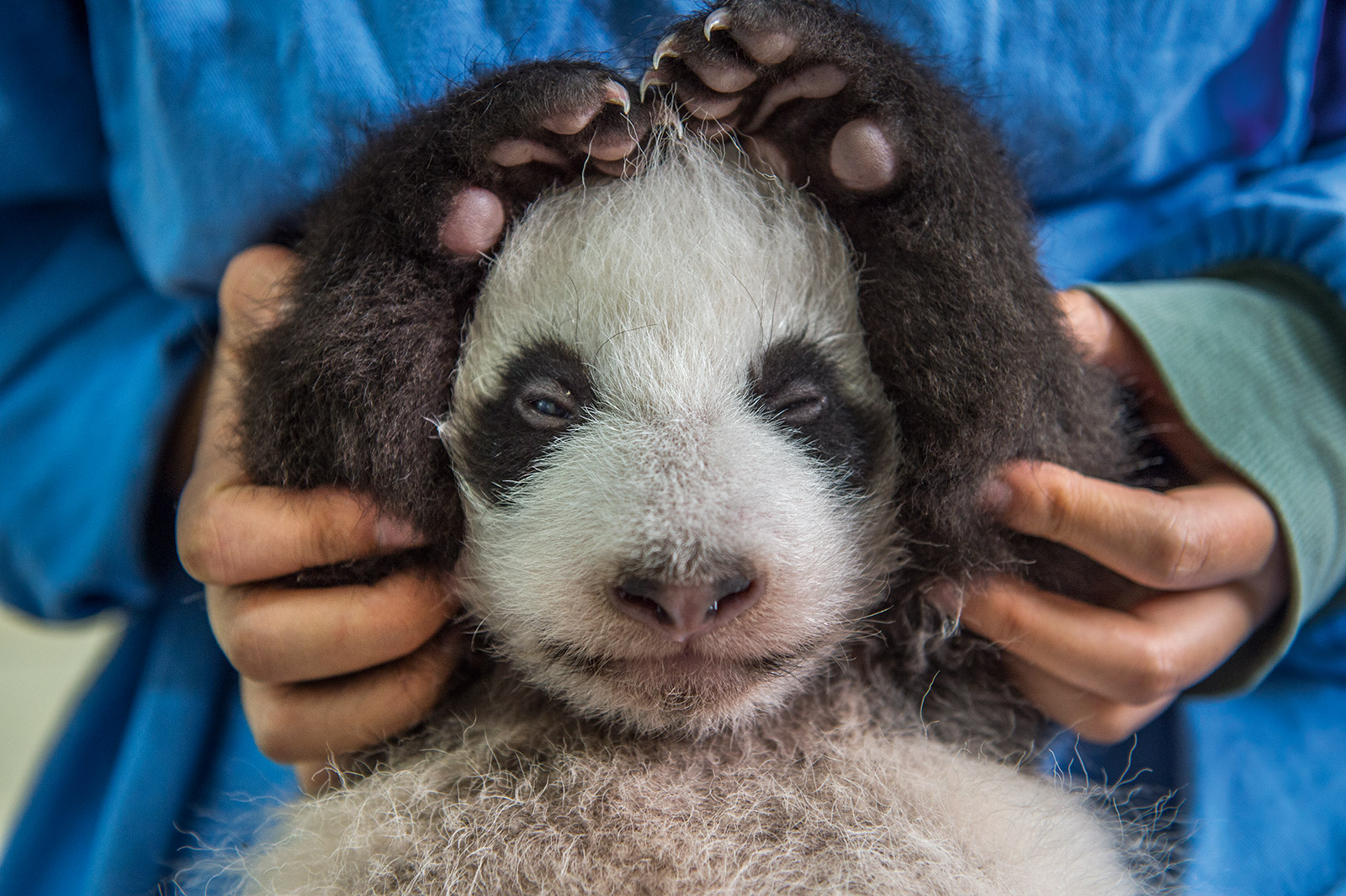 Caring for a panda cub is hard work. The cubs have to be rocked, burped and rubbed.

Once cubs are born, each step of their development is carefully monitored. As they grow up and learn the skills they need to survive in the wild, they can progress into bigger, wilder enclosures — but only when they are deemed ready.

“They have to pass this series of tests like, can they get leeches off? Can they find the best bamboo? Do they run away from predators? All these little tests are given to them,” Vitale said.

Each new enclosure is named after a school by Zhang Hemin, director of the China Conservation and Research Center for the Giant Panda. He calls the final one Harvard. If they pass all the tests at Harvard, they’re ready to graduate into the real world. 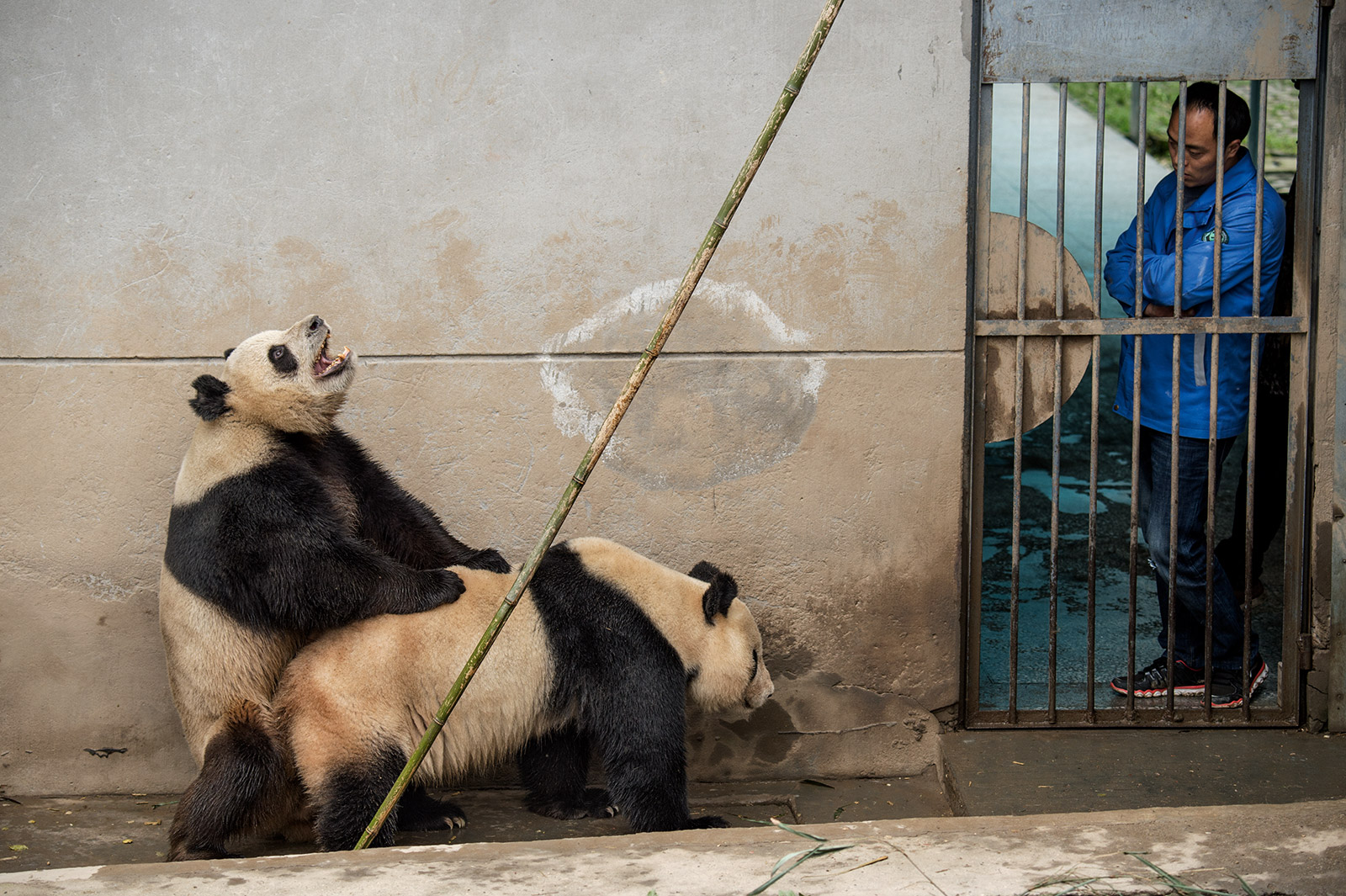 While photographing the pandas inside the facilities and in their natural habitat, Vitale always took great care to respect their well-being. She’d spend hours inside the smelly panda costumes waiting to get a good shot.

“The few opportunities that I was allowed to hold a baby panda, I literally thought I was going to die of cuteness overload,” she said. “There is something about a baby panda. I'm sure it releases those same chemicals that they say get released when you look at your own baby. Like there's just something indescribable, you fall in love.”

The pandas aren’t as soft as they look, she said. Their fur is coarse, they smell like wet puppy dogs, and they squeak and make all kinds of different sounds. 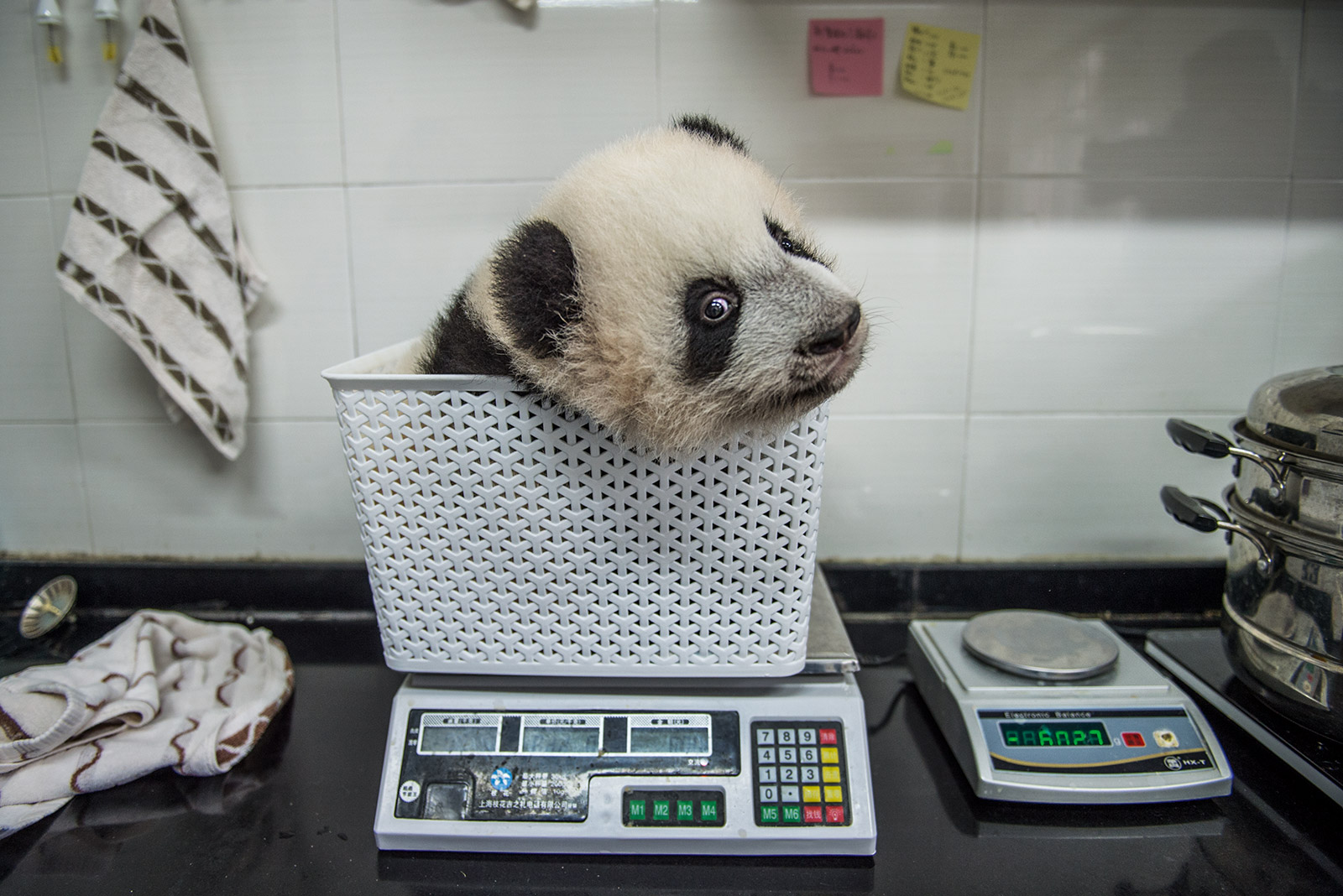 Baby pandas grow quickly. They are among the fastest-growing mammals, increasing from around 4 ounces at birth to 4 pounds in their first month. 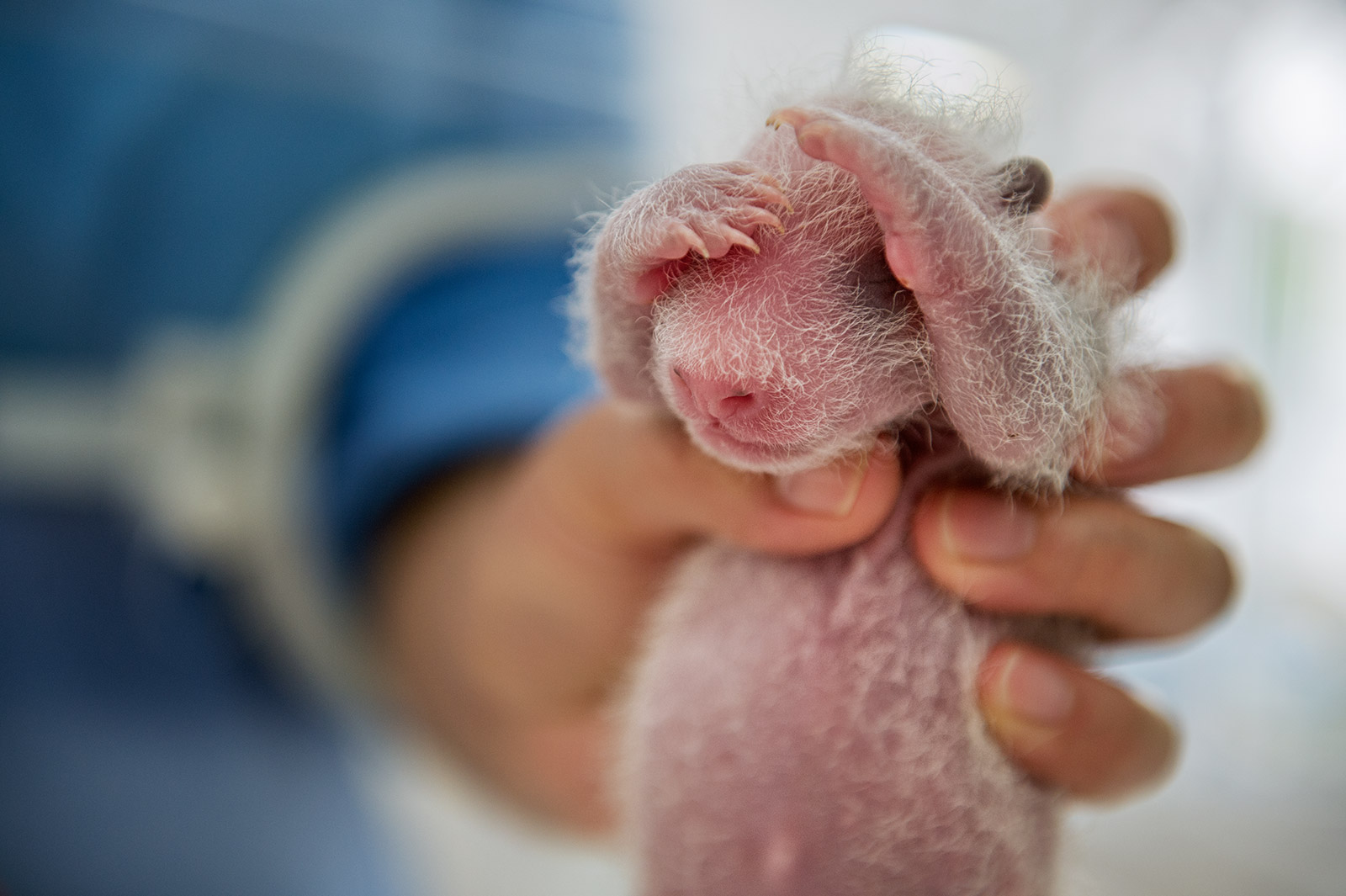 Newborn pandas are blind and hairless, and they need to be rubbed to stimulate their digestive systems.

But as cute as they are, they’re still bears, as Vitale learned on previous assignments.

“When they get over 6 months old, they can be incredibly painful,” she said. “They have teeth and claws and they love to climb. … I have scars all over my legs from baby pandas trying to climb my legs.”

In the 1960s, only 30 percent of infant pandas born at breeding centers survived. Now it’s 90 percent, thanks to advances in knowledge and technology. 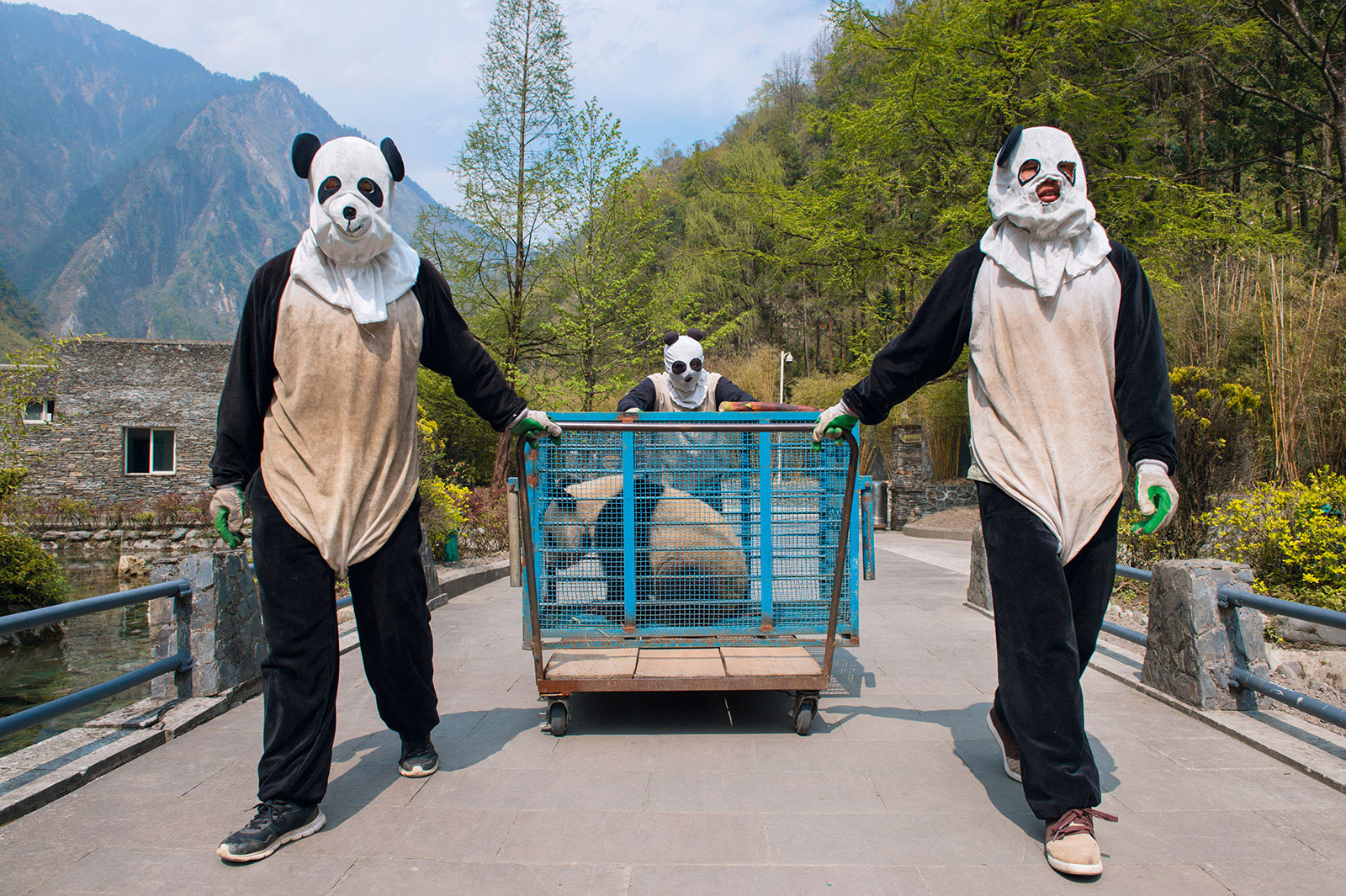 Habitat is important, too. Pandas only live in a few mountainous regions of China where bamboo — basically a panda’s entire diet — is plentiful. And over the years, development has cut down on those areas.

Fortunately, Vitale said, China is creating huge reforestation projects with the money they get from renting pandas out to zoos around the world. They’re trying to link all the corridors where pandas live and give them new places to migrate when they need to.

“If they can get this species off the endangered species list, that makes me feel hopeful,” Vitale said. “Not to say that we don't have a ton of work to do — and China knows it and so do all of us — but this can represent a way forward for so many other species.” 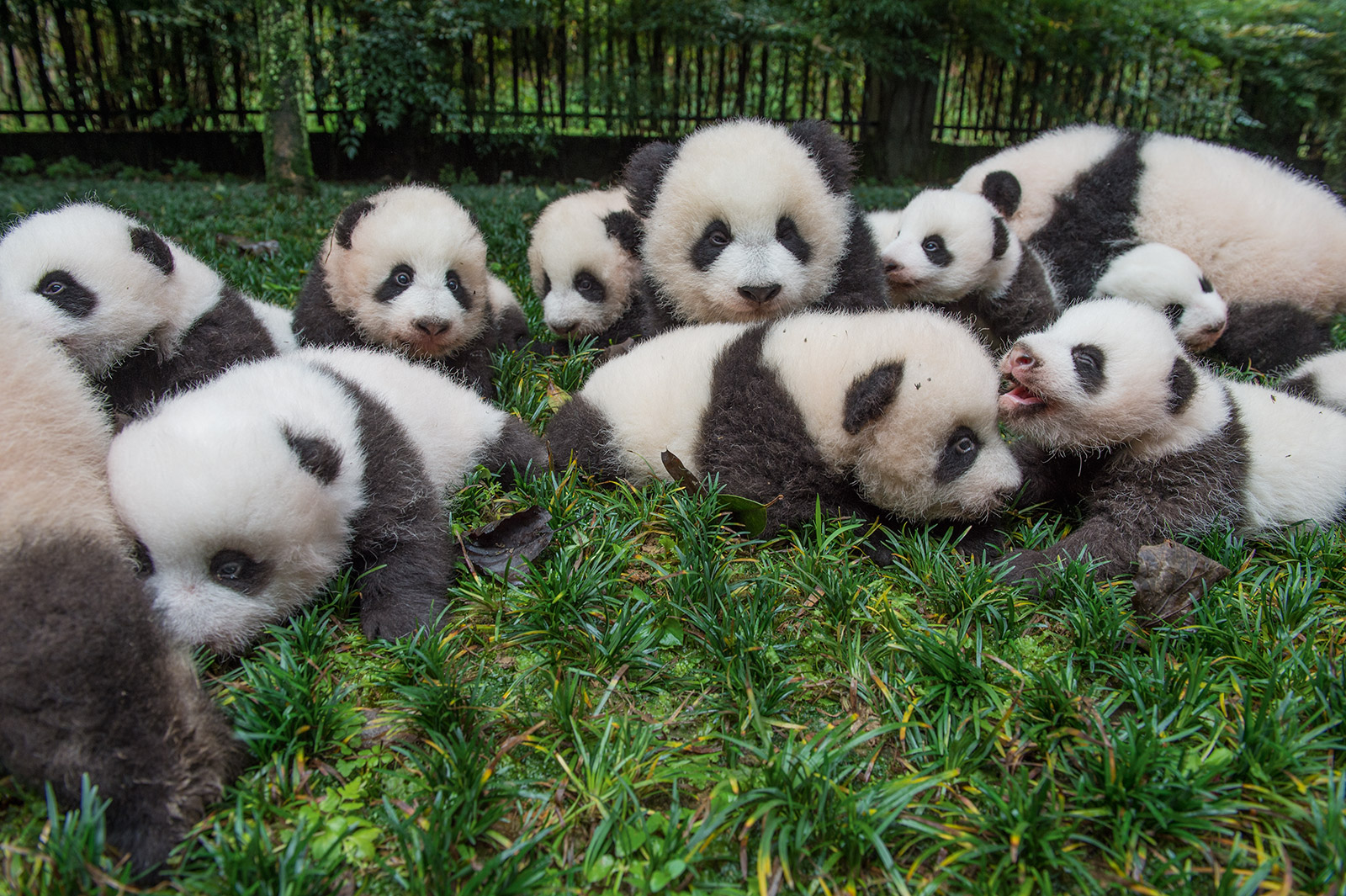 Panda cubs are brought out for a portrait at the Bifengxia Giant Panda Base in China’s Sichuan Province.