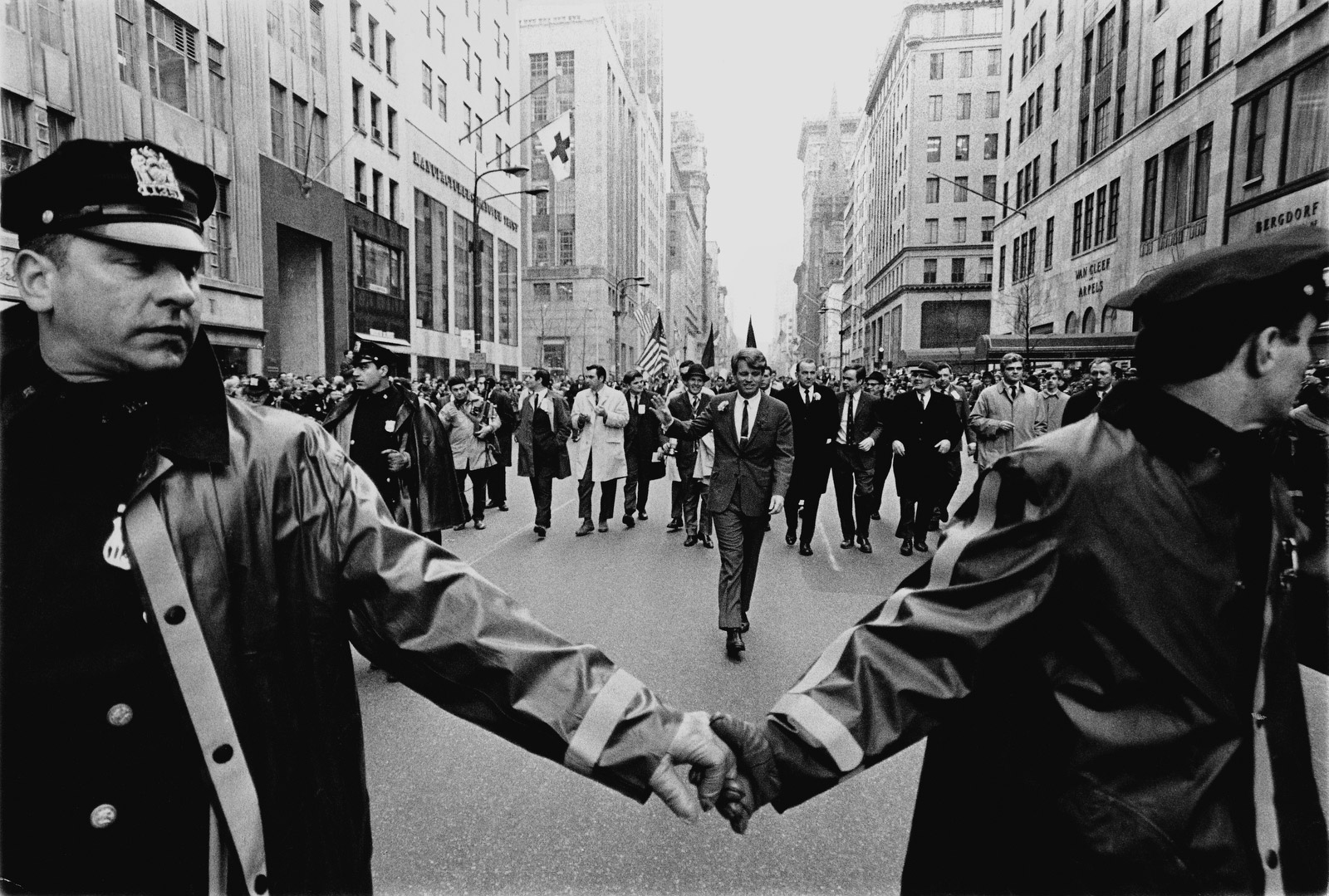 Robert F. Kennedy waves to people at New York City’s annual St. Patrick’s Day parade in 1968. It was there that the US senator announced he would be running for President.

Robert F. Kennedy waves to people at New York City’s annual St. Patrick’s Day parade in 1968. It was there that the US senator announced he would be running for President.

Harry Benson was just a few yards away from Bobby Kennedy when the presidential hopeful was struck by an assassin’s bullet 50 years ago.

“I never heard anything,” the 88-year-old photographer recalled last week. “I turned to go one way. Bobby was walking another straight ahead of me. A girl screamed who wore a ‘Kennedy for President’ hat, and I knew: This is it. This is it.

“And then the room moved, screaming, ‘Another Dallas!’ ”

Dallas, of course, is where Kennedy’s brother John was assassinated just five years earlier. And just two months earlier, the nation had witnessed the assassination of civil rights leader Martin Luther King Jr. It was a turbulent time in the country, and people were on edge. 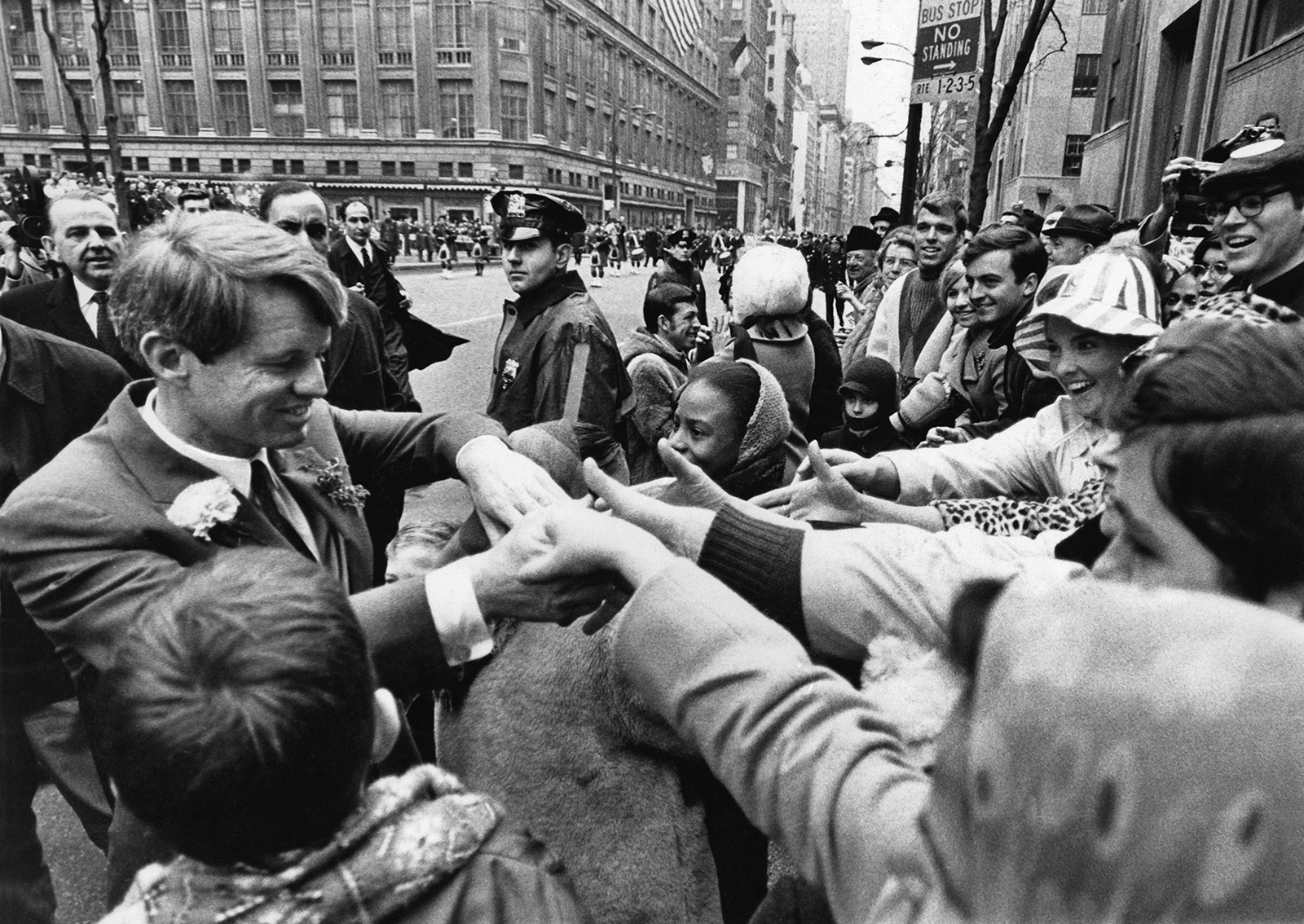 Kennedy greets people during the St. Patrick’s Day parade in 1968. 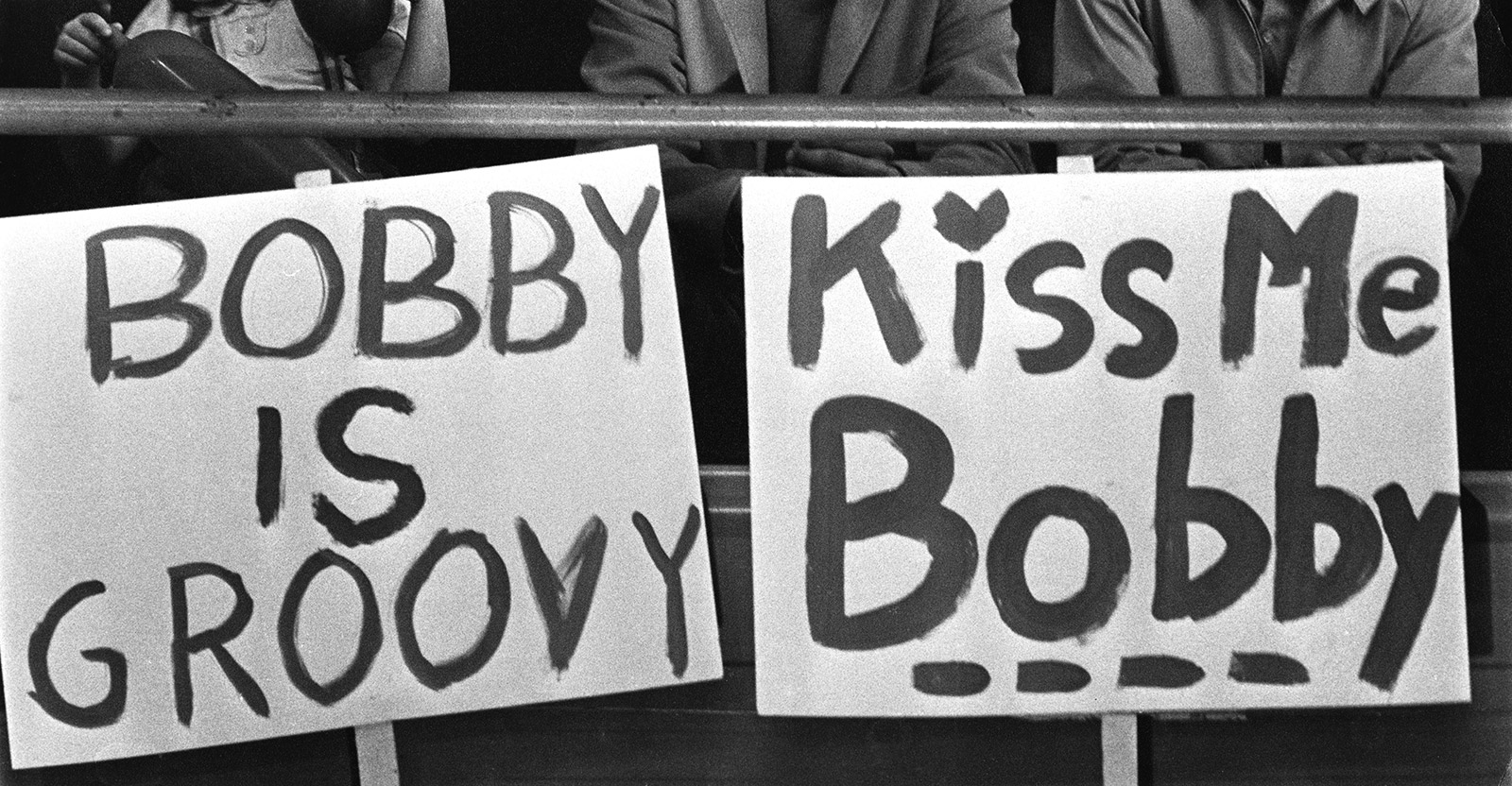 “I have always thought that 1968 was the year America had a nervous breakdown,” Benson says in his book “R.F.K.: A Photographer’s Journal,” which documents Kennedy’s campaign from its hopeful beginning in New York to its tragic end at the Ambassador Hotel in Los Angeles.

Kennedy, fresh off winning California’s Democratic primary, had just delivered his victory speech when he was shot.

People in the hotel began to panic, but Benson tried to keep a cool head and focus on the job at hand: Get the pictures, document history — as painful as it may be. He told himself, in colorful terms, don’t mess this up. Not today. Bobby would understand. 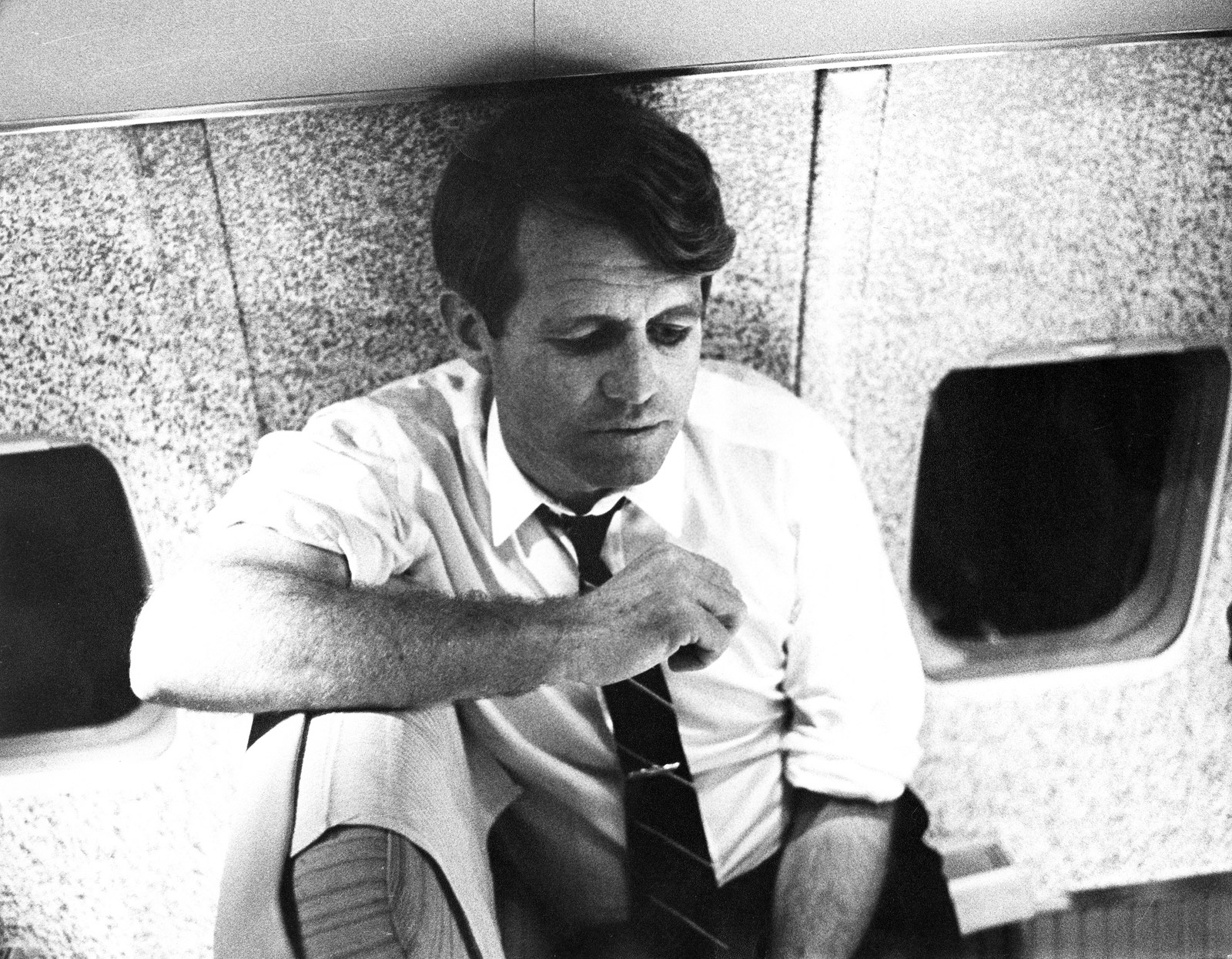 Kennedy sits on a plane during his campaign. Benson said Kennedy was a very approachable politician. 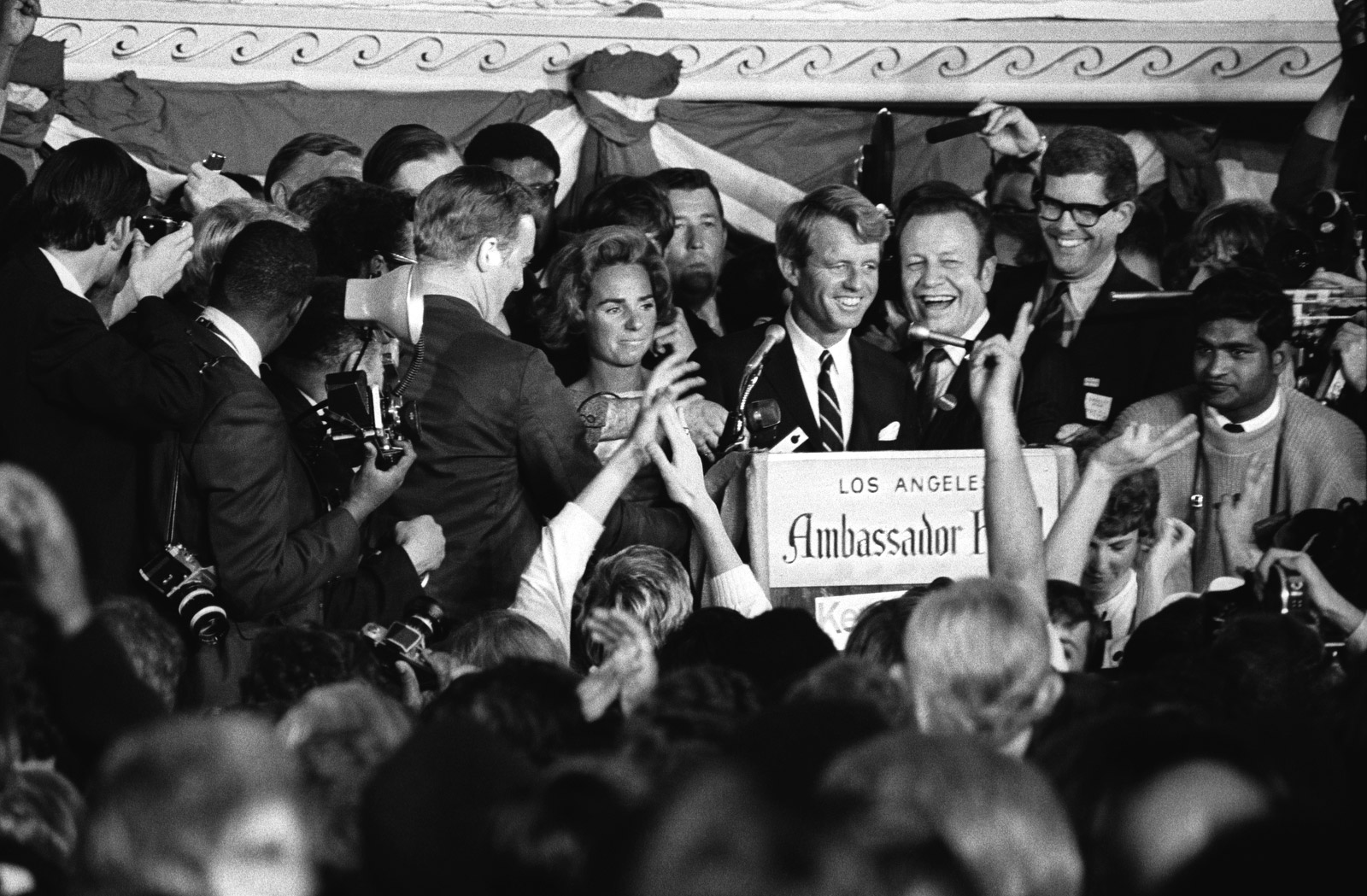 Kennedy gives a speech at the Ambassador Hotel in Los Angeles, shortly after winning the California Democratic primary. He was shot just after giving the speech.

It wasn’t easy. In chaotic, stressful moments like this, people don’t exactly go out of their way to accommodate the photographer. Some began punching Benson.

So the veteran photographer kept moving from place to place, taking pictures of the chaos around him while working out exposures in his head.

“The thing you learn is not to be standing like a statue — or somebody's going to come and try to hurt you. And they did,” he said. 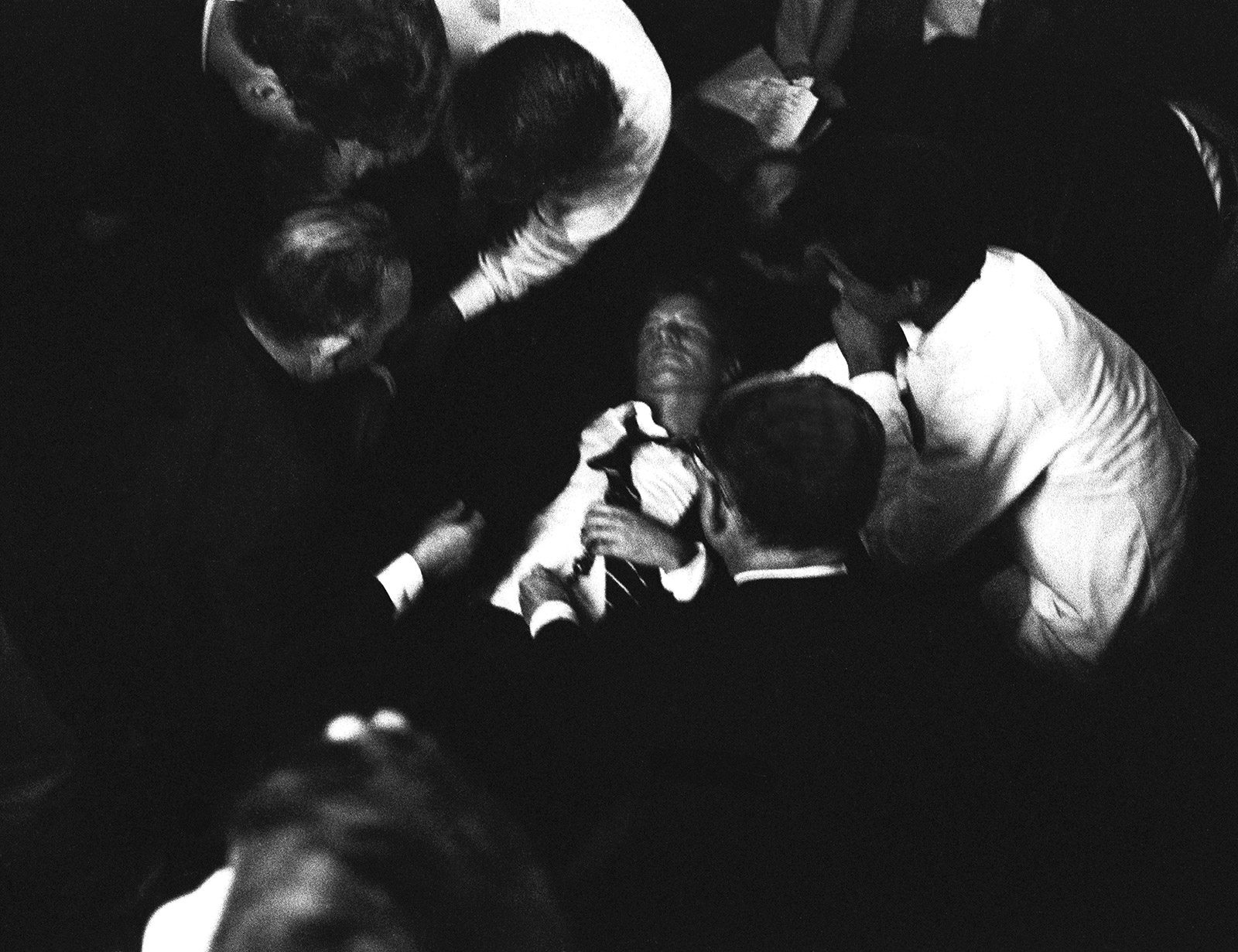 People attend to Kennedy after he was shot. “It was just a screaming, awful panic,” Benson remembers.

As soon as he would finish a roll of film, he would stuff it into his sock so it couldn’t be easily confiscated. It was while he was changing film that Benson noticed that others around him had also been shot — five people were wounded.

Benson had been so focused on the job that he didn’t even consider his own personal safety. 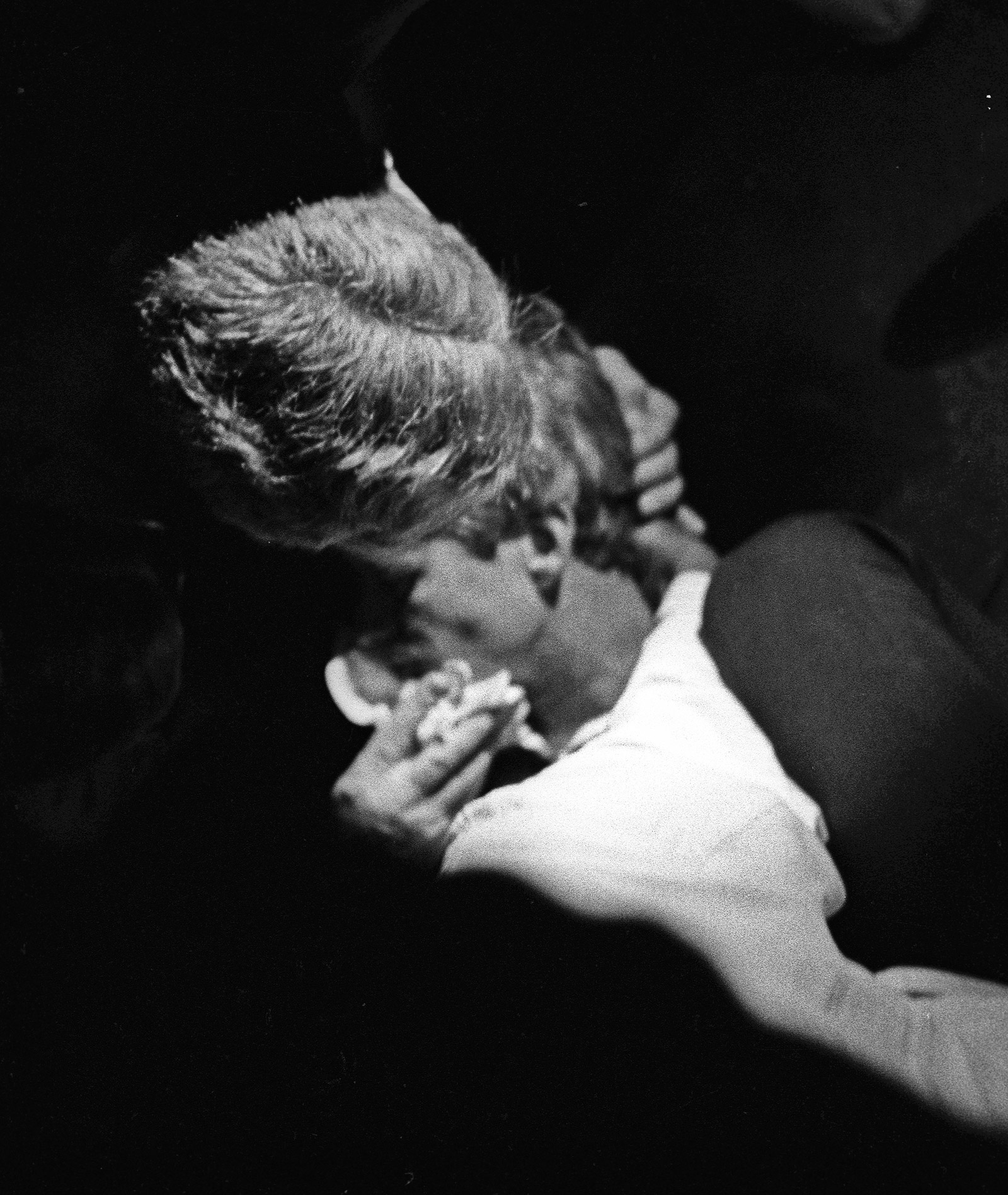 Many people were crying at the hotel after Kennedy was shot. “To them he symbolized the hope for a new beginning,” Benson says in his book. 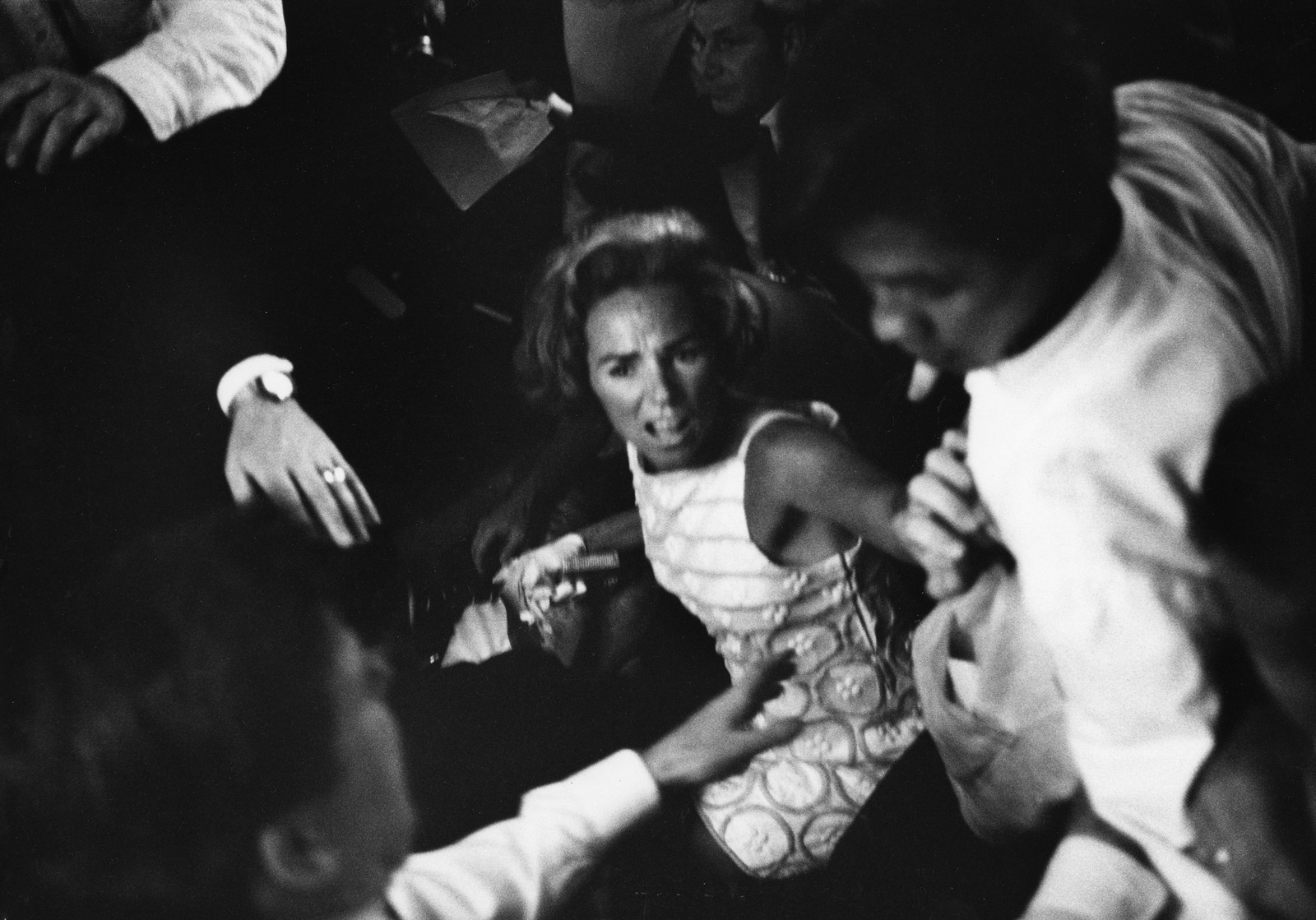 Kennedy’s wife, Ethel, pleads with people to give her husband air.

Over the last few decades, people have asked Benson if he has any nightmares about that frantic night.

“I always say I would have nightmares if I hadn't have photographed it,” he said. He didn’t want to freeze up in the moment and regret it for the rest of his life.

Benson had been on the campaign trail with Kennedy from the beginning, when the senator announced his candidacy at a St. Patrick’s Day parade just three months earlier.

“Bobby was a rock star,” he said. “People wanted to touch his hair, take his cufflinks.” 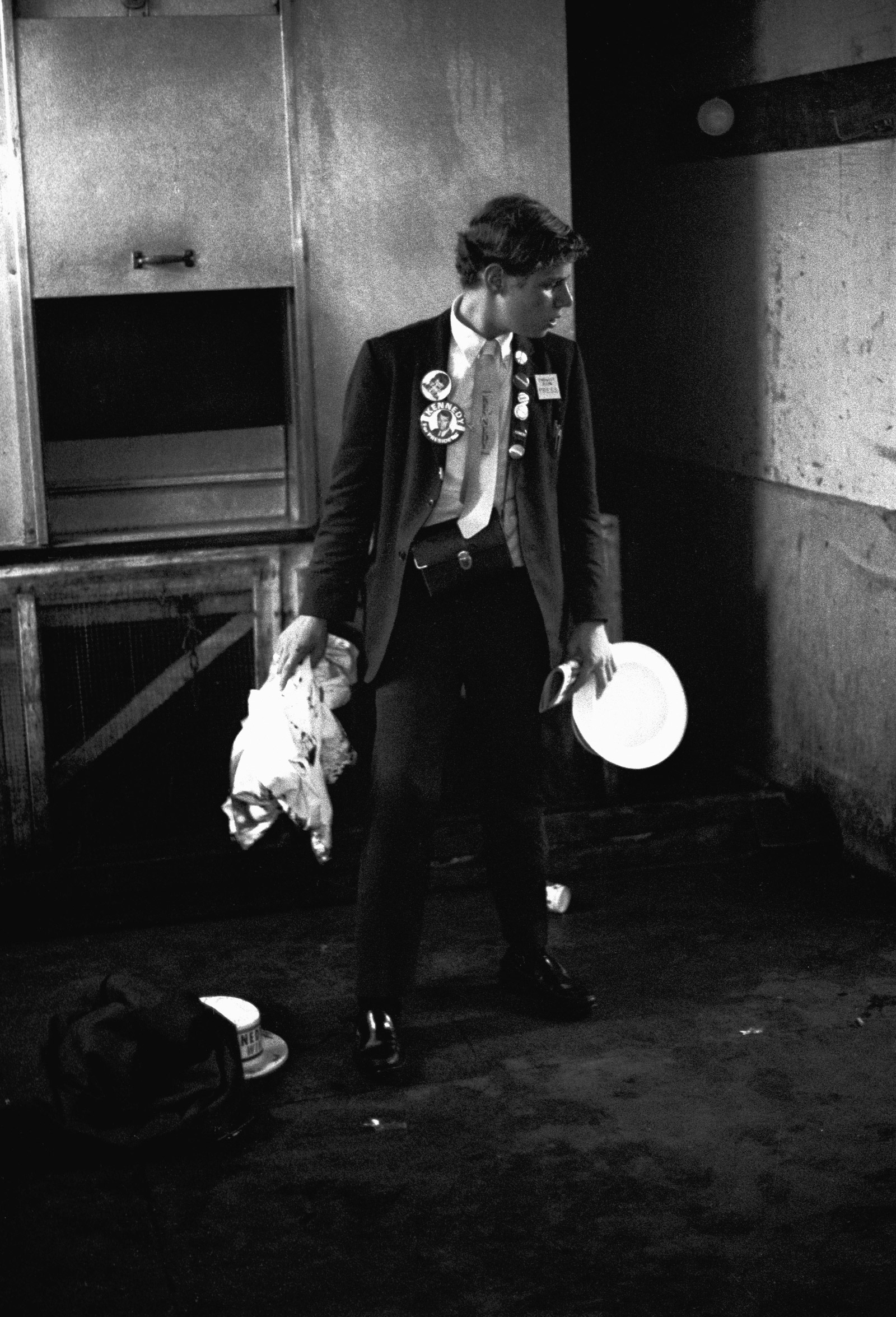 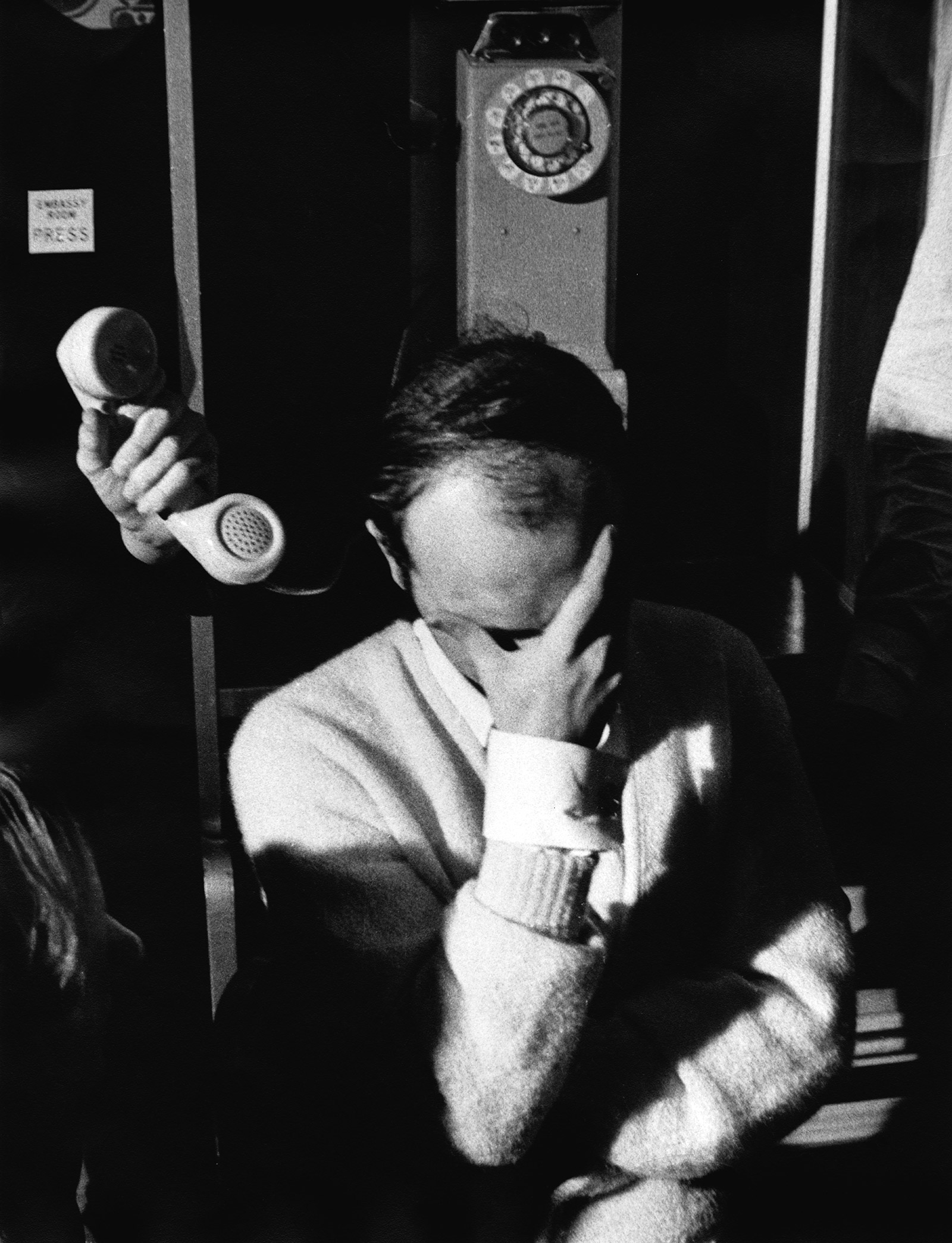 A reporter breaks down at the Ambassador Hotel.

Kennedy had a common touch, Benson said. He never talked down to people, and nobody wasn’t worth talking to.

Benson had previously gotten to know the candidate during a Kennedy family vacation in 1966. Those photos, of Kennedy on the Snake River in Idaho, are also in the book, along with excerpts from Benson’s journals.

“He was really a good guy to cover because you always left him wagging your tail that you had gotten something,” Benson said. Kennedy had an easygoing, open-door policy. If he was staying at a suite, you were welcome to come in and visit — a rare thing for a famous politician. 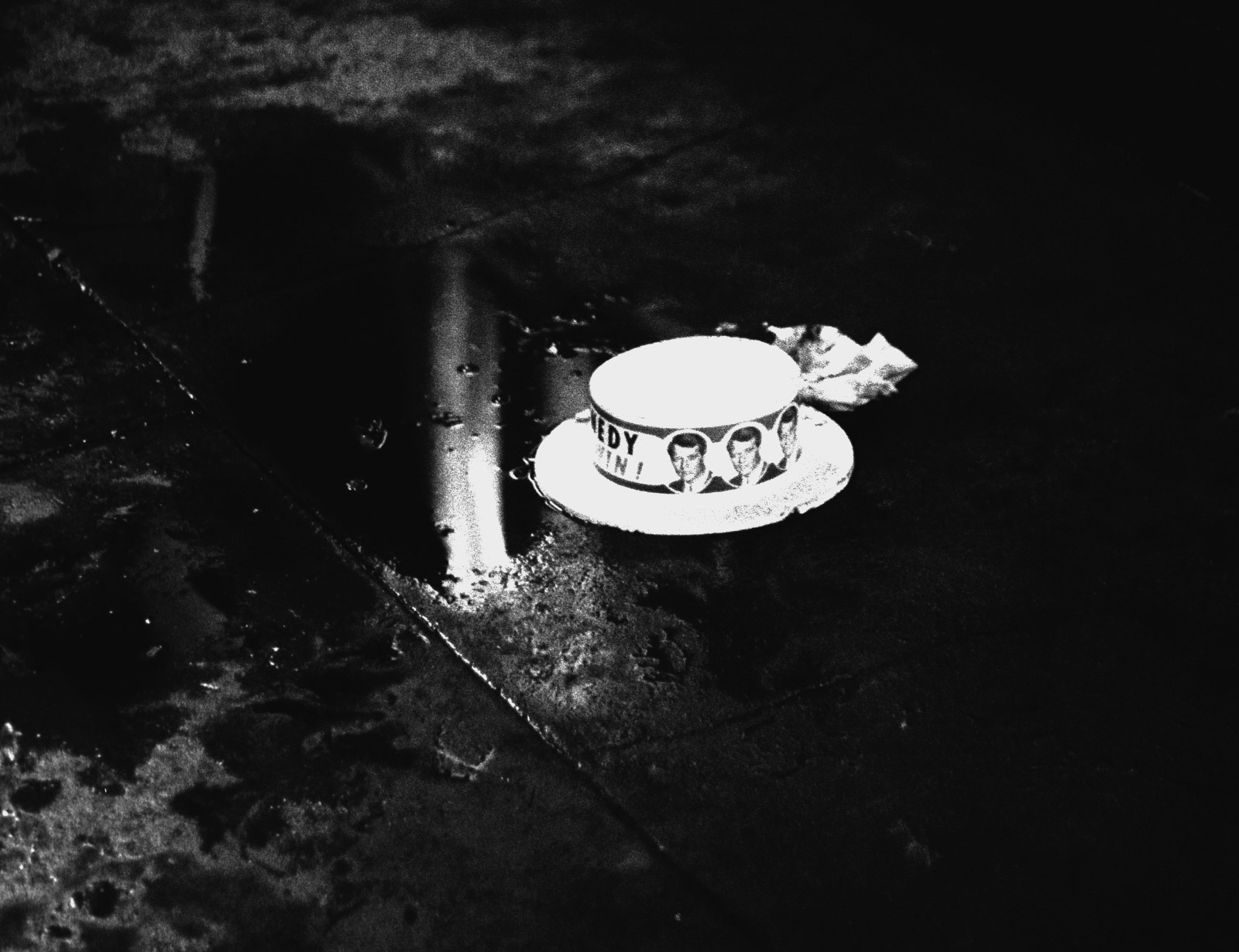 Benson said a young woman ducked under rope and placed her straw hat in the blood-soaked area where Kennedy had fallen. “That was all that was left,” he says in his book. “I will always remember that moment.”

During his long career, Benson has photographed a who’s who of famous people. The Beatles, Michael Jackson, Martin Luther King Jr. and Queen Elizabeth II are just a few of the marquee names near the top of the list. He’s also photographed the last 12 US Presidents, from Dwight D. Eisenhower to Donald J. Trump.

“I think Bobby would have been a great President,” Benson said. “Even Nixon said to me that he would probably have beaten him.” 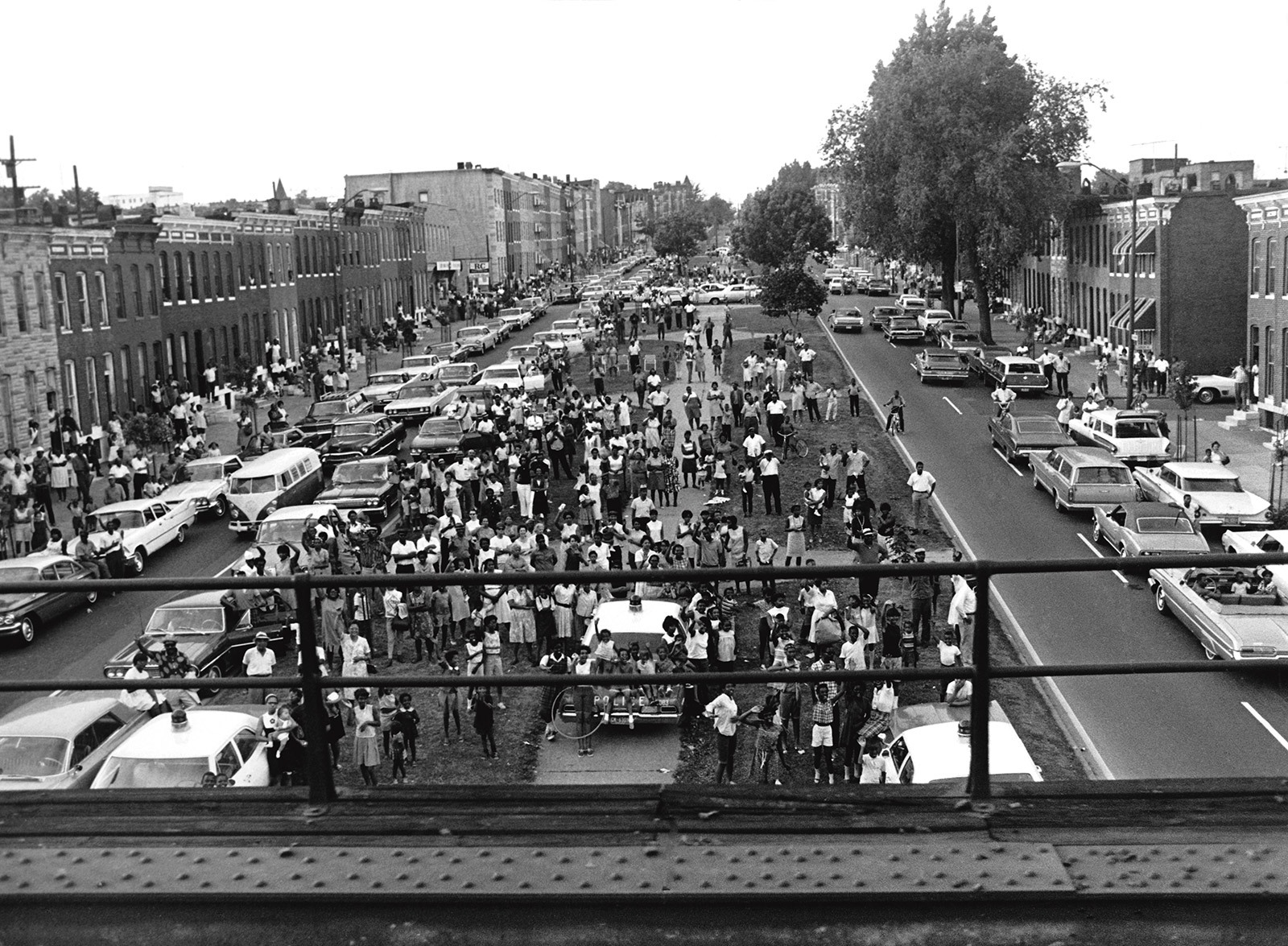 Harry Benson is a Scottish photographer who came to America with the Beatles in 1964 and stayed. His book “R.F.K.: A Photographer’s Journal” is now available.