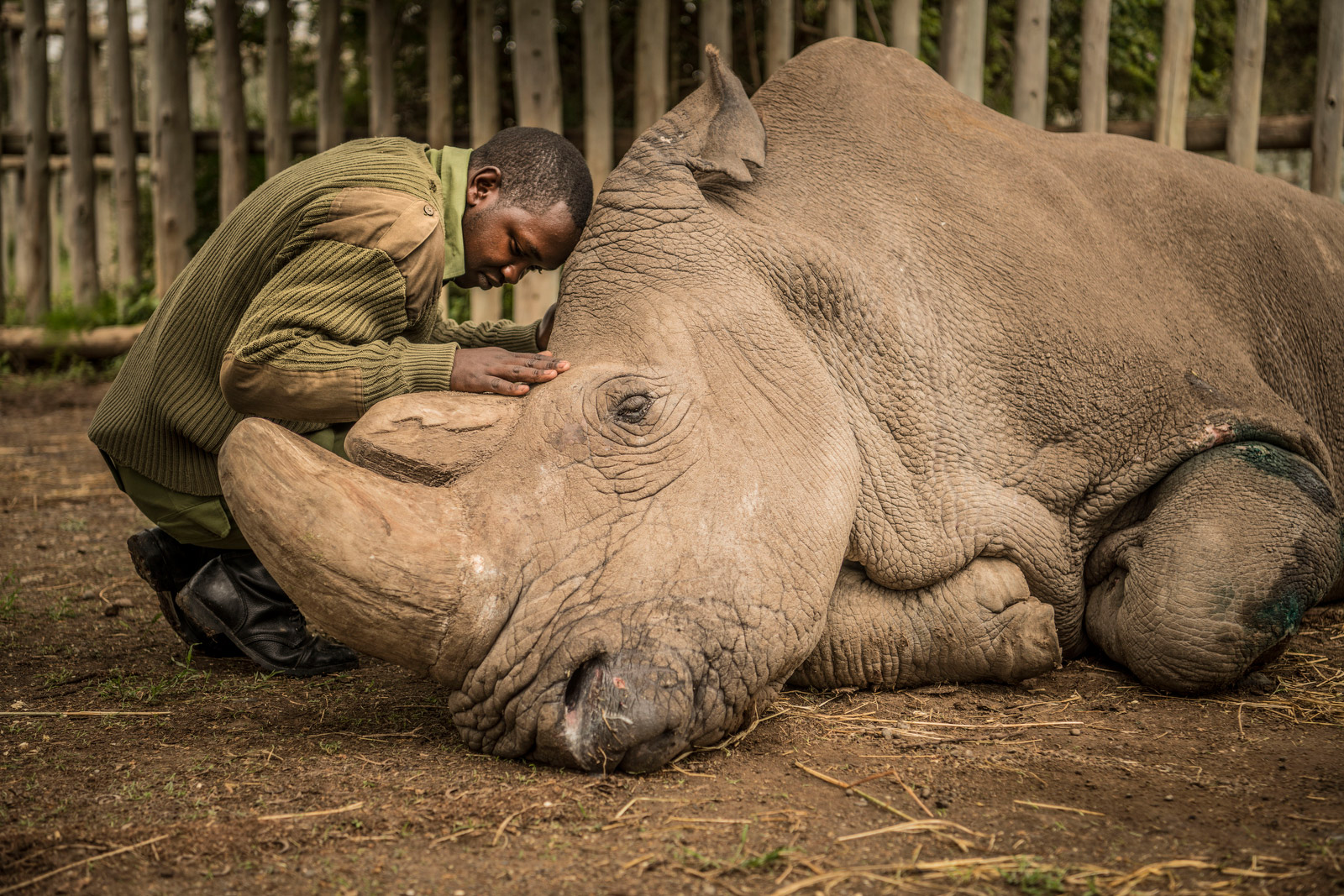 Joseph Wachira comforts Sudan, a northern white rhino, moments before he died Monday at the Ol Pejeta Conservancy in Kenya.

The life he lived: Photos of the last male northern white rhino

Joseph Wachira comforts Sudan, a northern white rhino, moments before he died Monday at the Ol Pejeta Conservancy in Kenya.

Sudan, a northern white rhino and the last male of his subspecies, died Monday at the Ol Pejeta Conservancy in Kenya.

The rhino — once called by the dating app Tinder as the “most eligible bachelor in the world” — was 45 years old and in poor health.

Before he was euthanized by a veterinary team, photographer Ami Vitale was able to say farewell to her old friend.

“It was heartbreaking yesterday, but I was relieved I could say goodbye,” Vitale said. “He leaned his head right into me and then the rains came pouring down, just as they had when he arrived here nine years ago.” 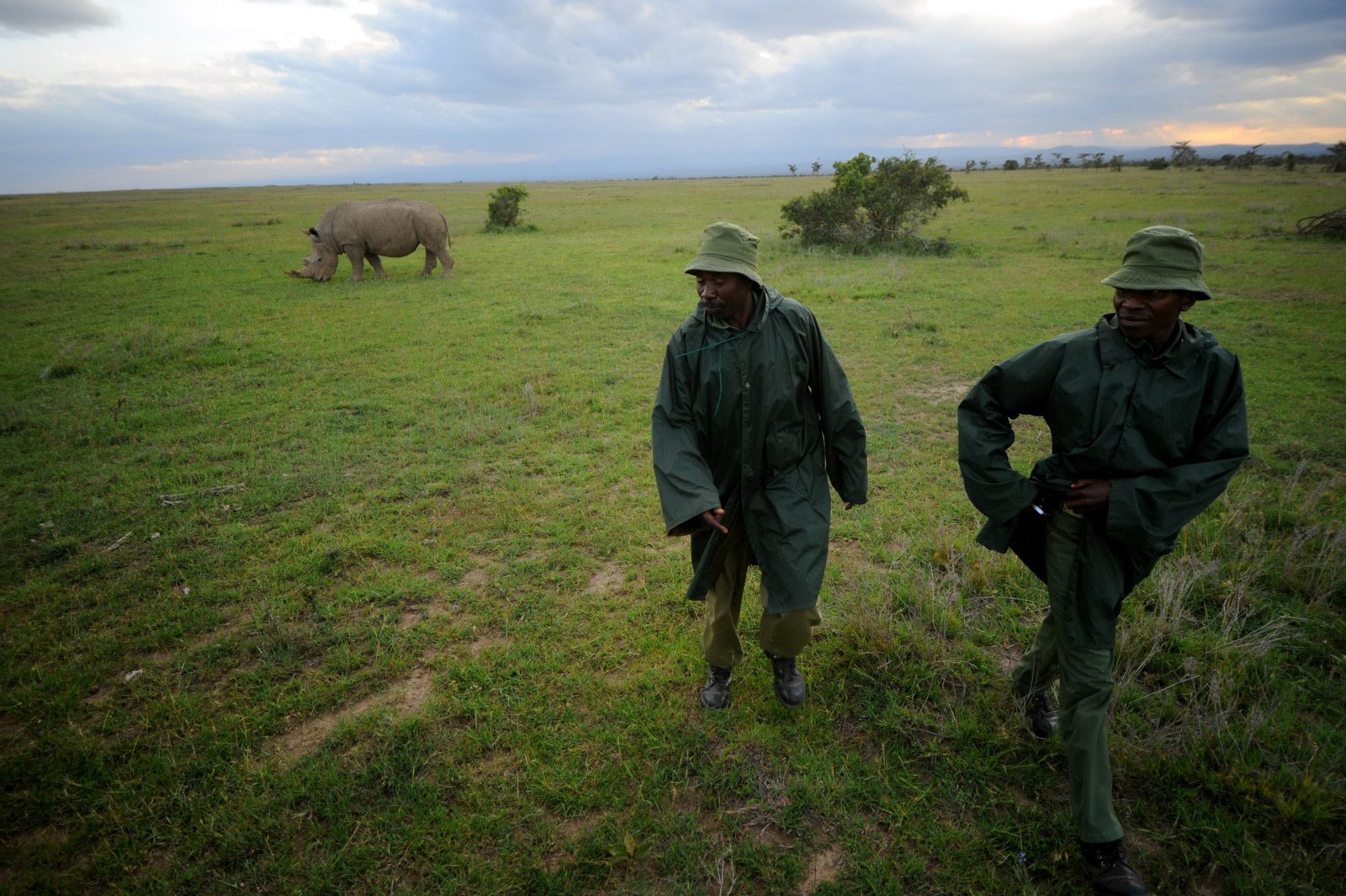 The Ol Pejeta Conservancy has been the home of northern white rhinos since 2009. There were only eight then, according to photographer Ami Vitale. Now there are just two left, and both are females.

Vitale first met Sudan in 2009, when he and three other northern white rhinos — among the last of their kind — were moved to Kenya from a zoo in the Czech Republic. The subspecies had been reduced to eight worldwide because of poachers, who target rhinos for their horns.

Workers at the conservancy watch the rhinos around the clock and protect them. The hope was that the climate and the extra room to roam would entice them to breed. But time ran out on Sudan, and now there are only two northern whites left in the world: his daughter, Najin, and his granddaughter, Fatu.

“It was really hard on all of his keepers,” Vitale said. “They’ve fallen in love with him. They say they wake up in the morning and see (the rhinos) often before they see their own children. They say, ‘These are our babies.’ ” 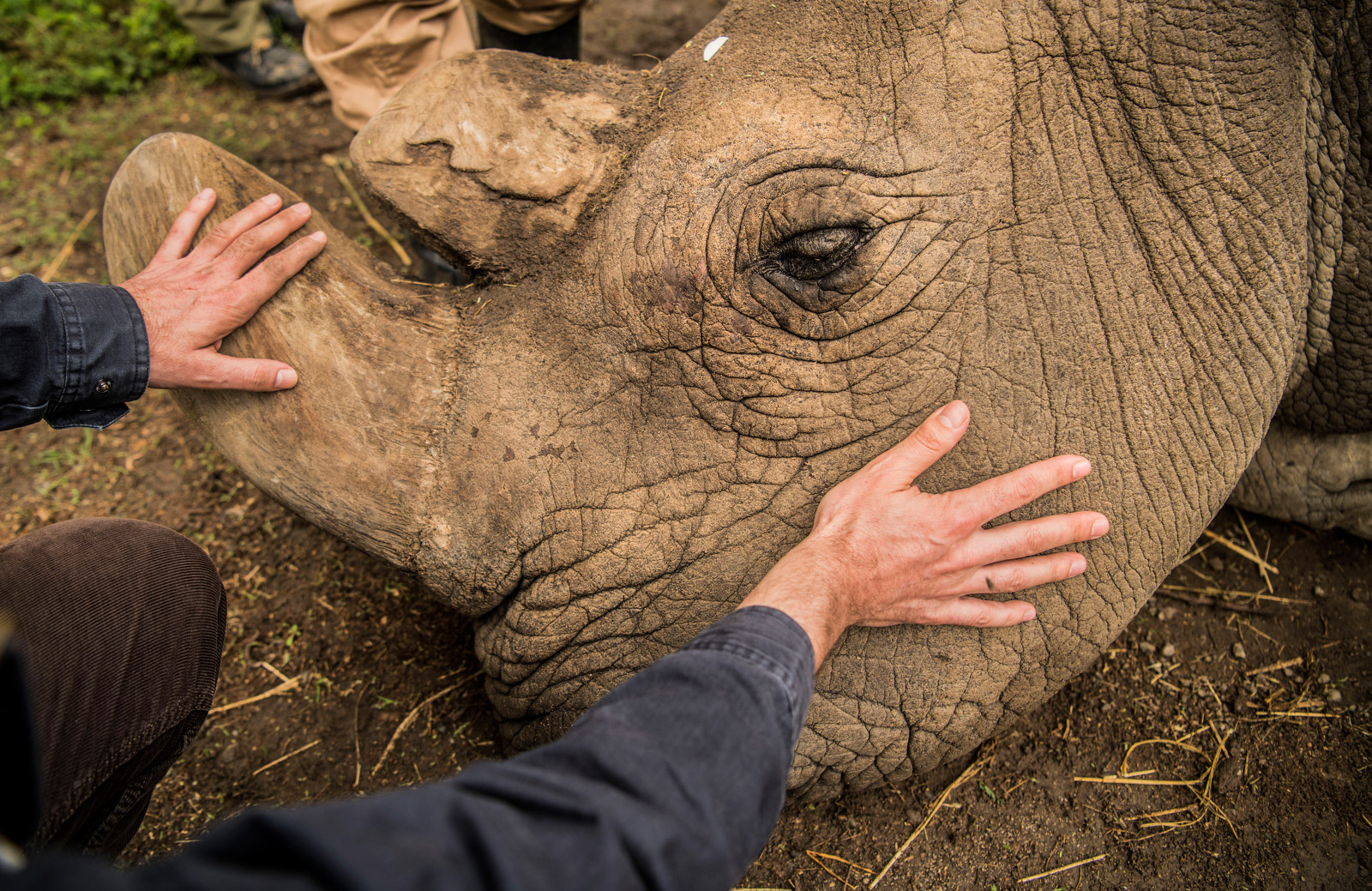 Sudan is comforted Monday before his death. He had been in poor health, and he was euthanized by a veterinary team. 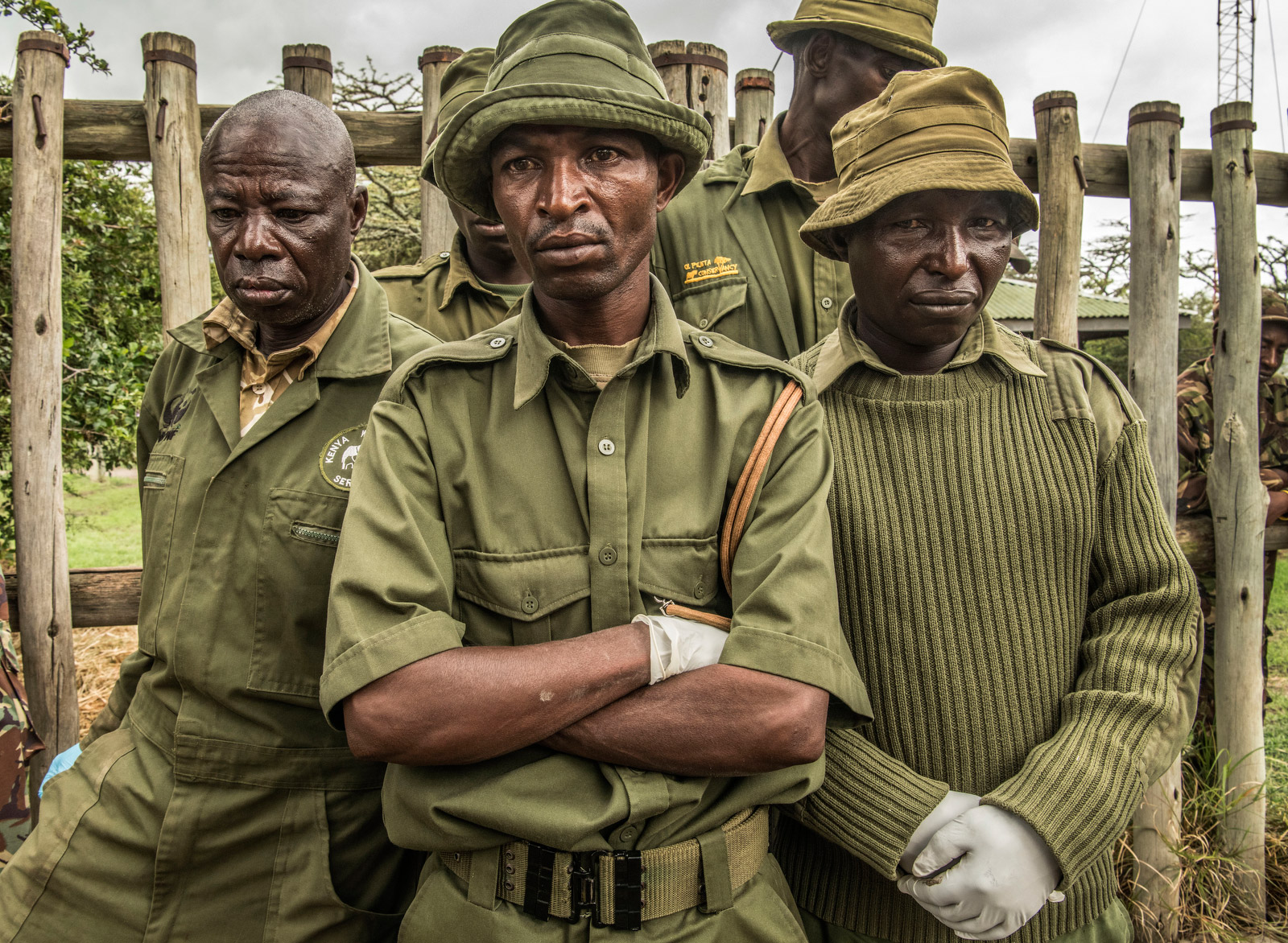 Workers from the Ol Pejeta Conservancy watch Sudan’s final moments on Monday. They had cared for the rhino for the past nine years.

Vitale said Sudan was a gentle soul. He was very affectionate; one vet called him a sweetie-pie.

“When he was first brought back to Africa, there were these torrential rains,” Vitale remembered. “I realized it was the first time he had rolled in African mud since he was a young rhino. It was a beautiful watching him reconnect with where he came from.

“Then yesterday when those rains came, he perked up. He was lying down, and he just pushed his head right up.”

Vitale, her voice slightly cracking with emotion, said it was like Sudan’s life had come full circle. 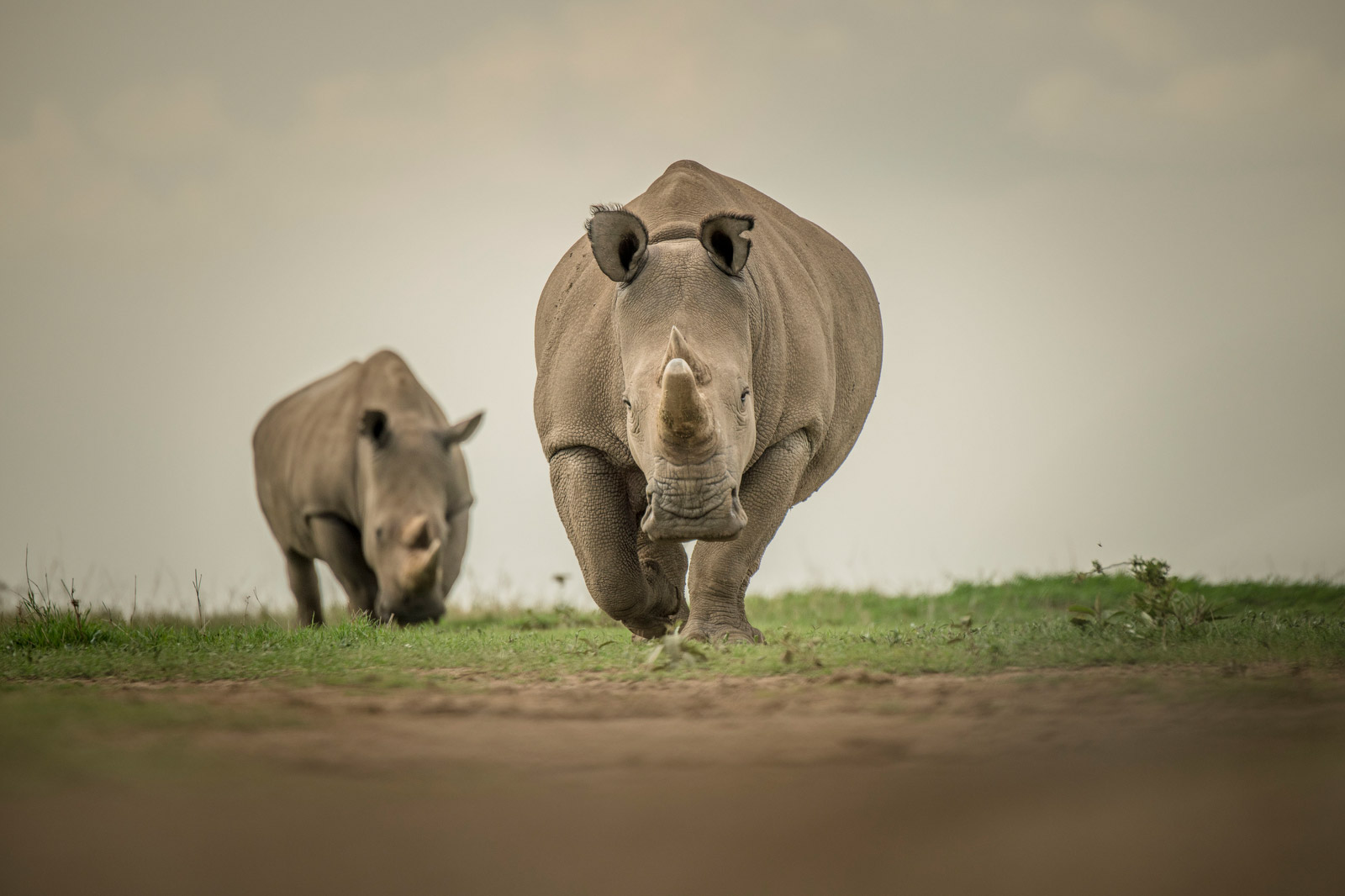 Fatu and Najin are the last two northern white rhinos left on the planet. Najin is Sudan’s daughter and Fatu is his granddaughter.

There still might be hope, however, for the northern white rhino. Scientists have saved some of Sudan’s genetic material, and they hope to use in-vitro fertilization to bring the subspecies back. They’ll have to use a southern white rhino as a surrogate, Vitale said, but they like their chances.

Even if they’re unsuccessful, Sudan’s death can leave an important legacy.

“At the very least, Sudan is an ambassador for so many other species that need our attention,” Vitale said. “This can be an incredible wake-up call. Even if you live 10,000 miles away, you can make a difference with your awareness or tourism dollars.

“Not all is lost. Even if we don’t save the northern white rhino, we can save the other threatened rhinos and a host of lesser-known species whose numbers are dwindling everywhere.” 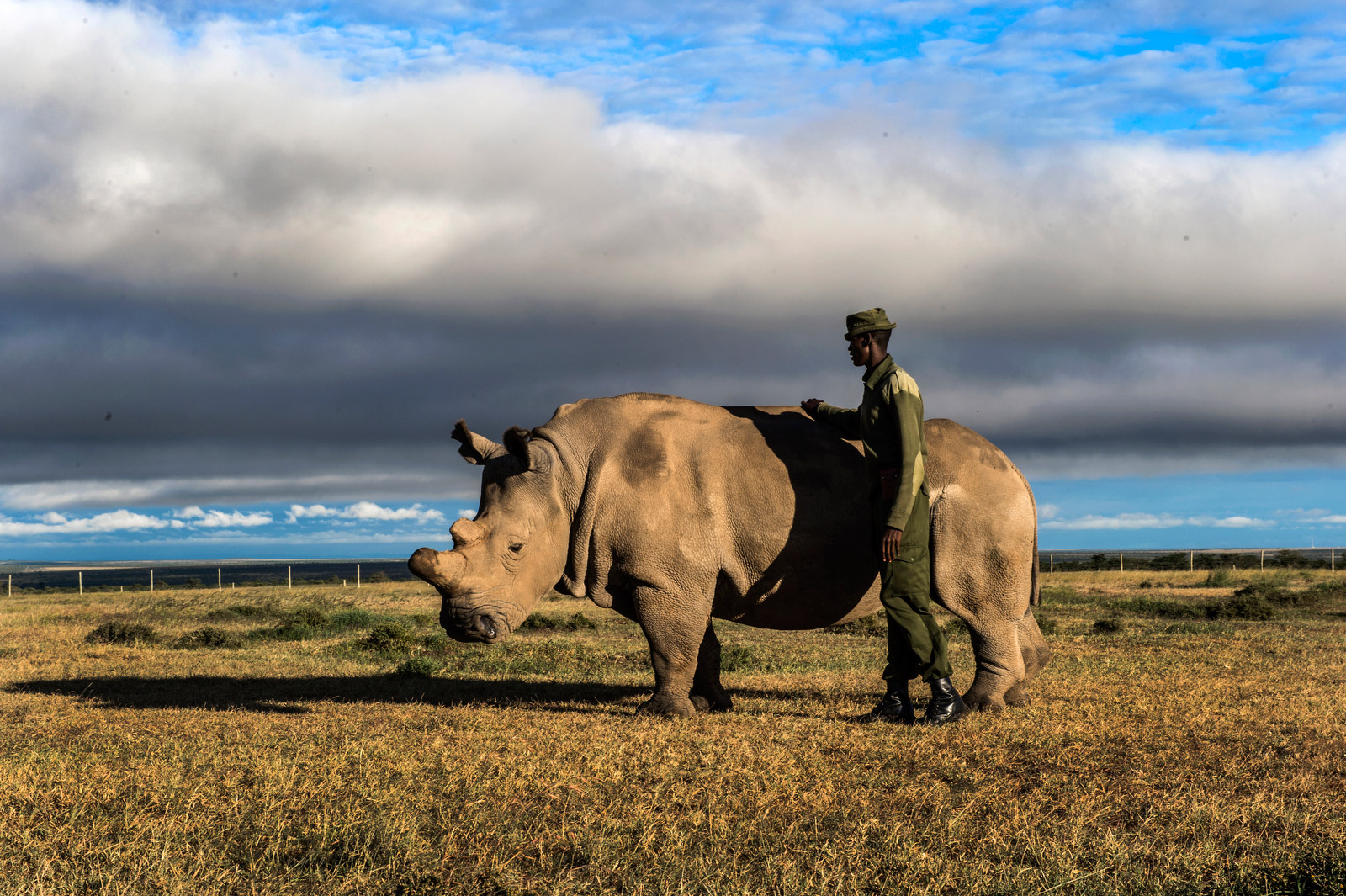 A wildlife ranger at Ol Pejeta looks after Sudan and the last northern white rhinos. The conservancy also protects other rhinos.

Vitale has been taking photos for National Geographic magazine since 2008, and she credits the rhinos for changing her career path.

For the first decade of her career, she covered conflicts around the world. Then in 2009 she learned about the rhinos’ story.

“When I first saw these ancient, gentle, hulking creatures, they broke my heart,” she said. “I couldn’t believe they had survived for millions of years but could not survive humanity.”

It altered the entire trajectory of her work. She has since covered the plight of pandas, and she’s now working on a story about giraffes and elephants.

"In a world of 7 billion people, we must see ourselves as part of the landscape,” she said. “Our fate is linked to the fate of animals. … We are so intricately connected. Take one species out and everything starts to crumble.” 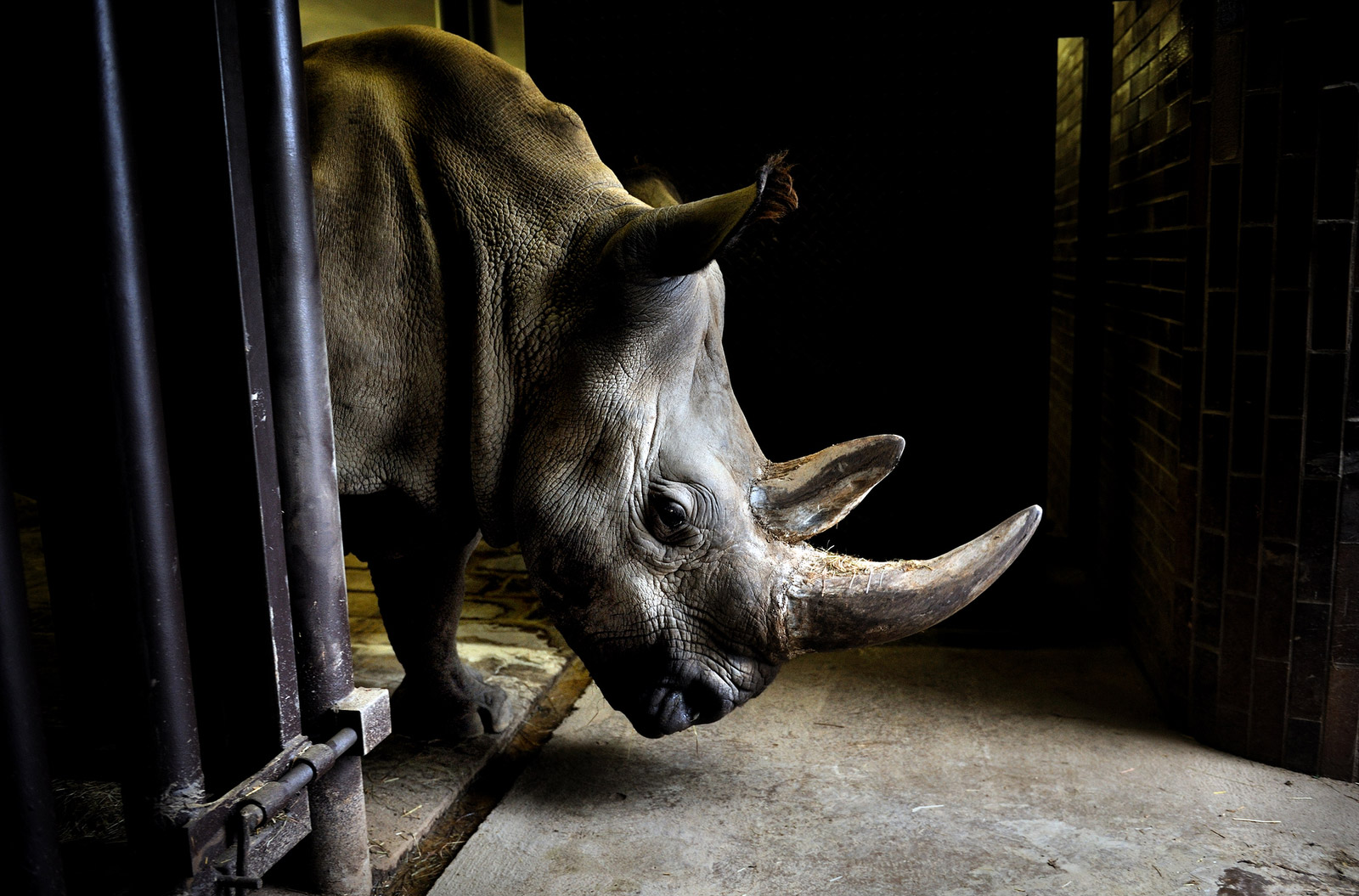 One of the northern white rhinos leaves a Czech zoo to go to Kenya in 2009.

The western black rhino was declared extinct seven years ago, another victim of the lucrative and illegal rhino-horn trade.

Vitale hopes Sudan’s story can raise more awareness about the problem and that along with the efforts of zoos and wildlife conservancies, we can start to see positive change soon.

“I wasn’t one that loved zoos in the past, but I learned how important and critical their role is in saving these species, as do conservancies like Ol Pejeta,” she said.

She said it was heartbreaking to see the sadness of the Ol Pejeta workers after Sudan passed away.

“They’re the real heroes, these men and women protecting all of these species,” she said. “There are people, often with very little, making huge impacts in their communities and the planet.” 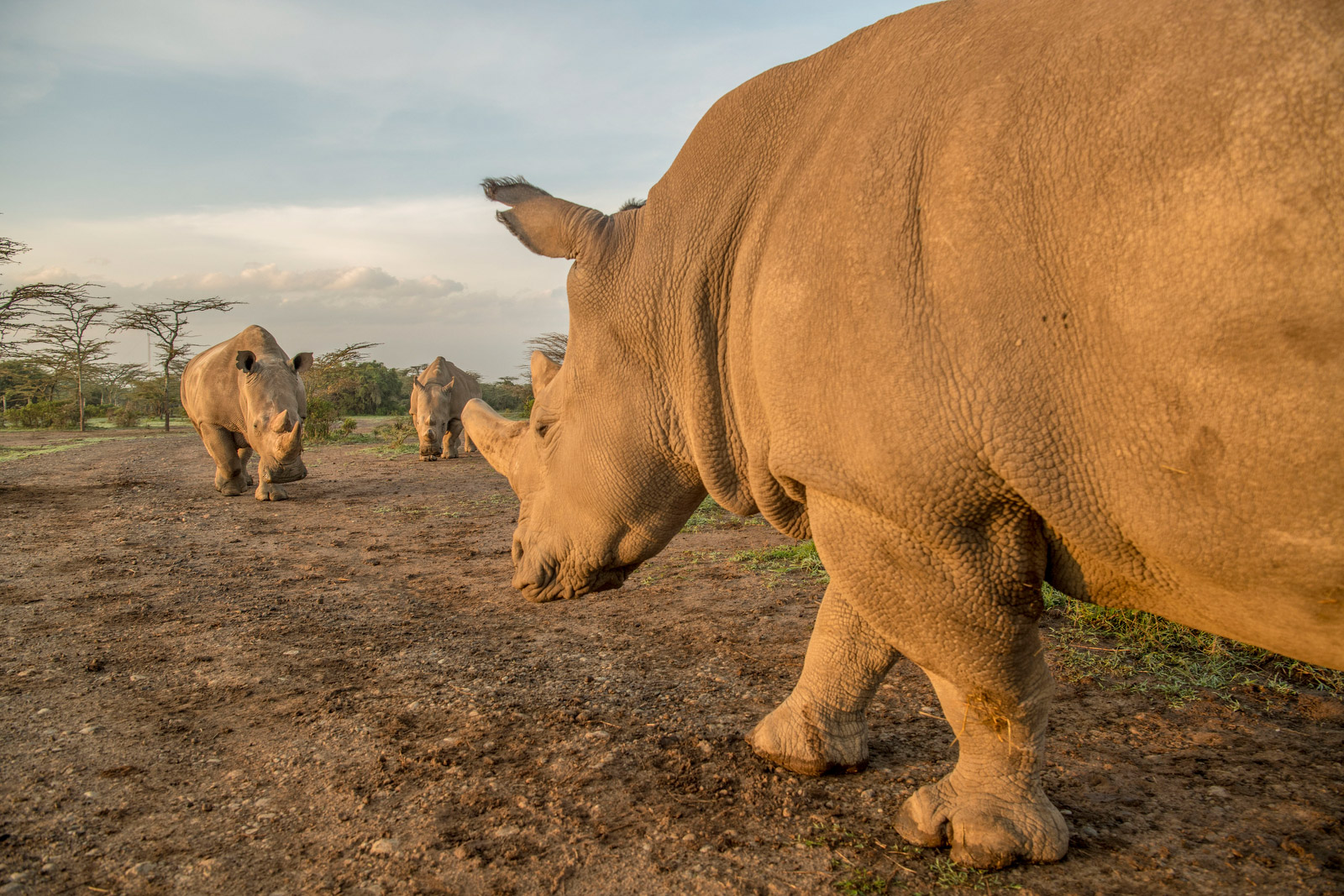 Fatu, right, grazes with her mother and a southern white rhino hours after Sudan passed away.