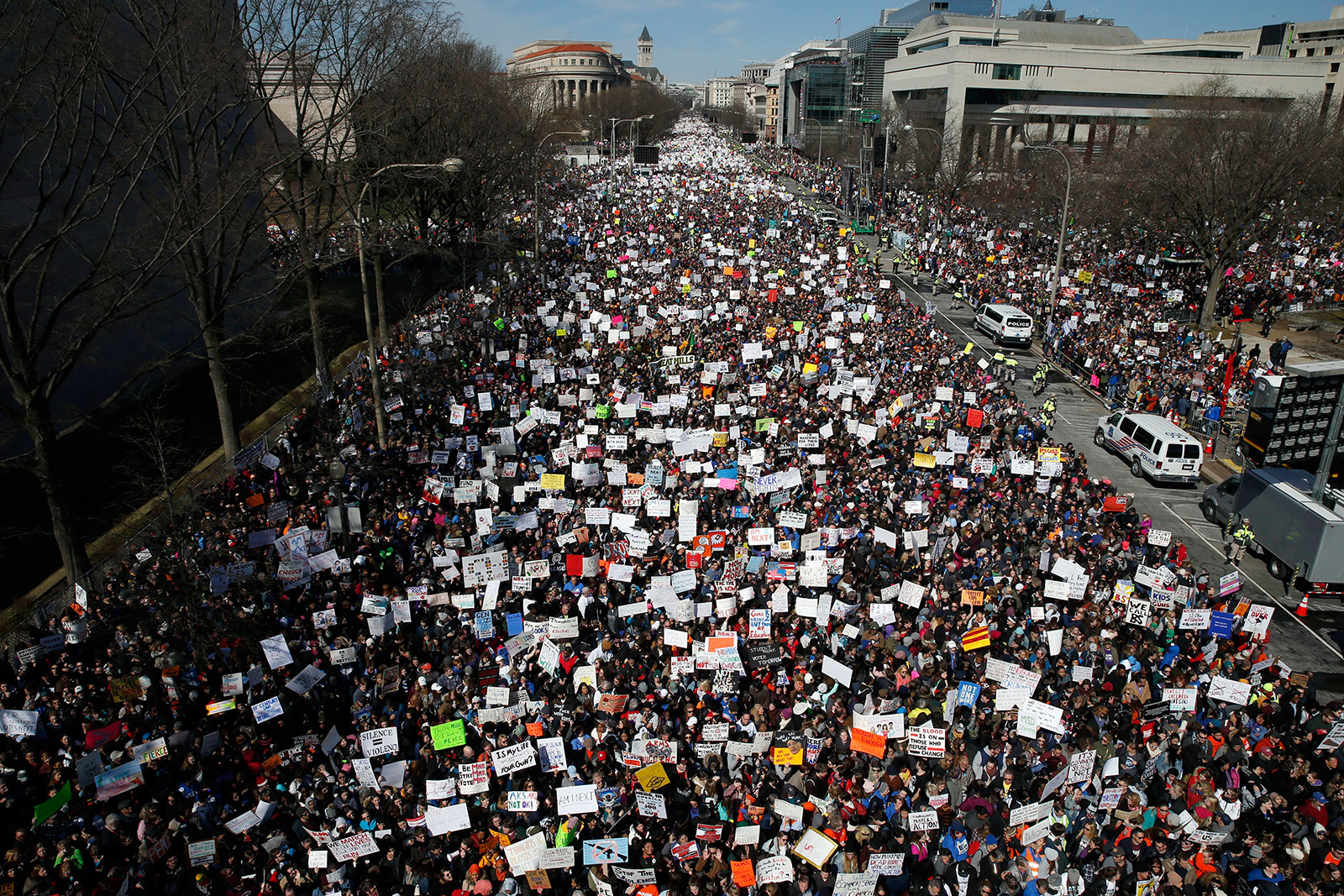 In pictures: The March for Our Lives protests

Survivors of last month’s school shooting in Florida led the March for Our Lives, a protest in Washington that called for stricter gun-control legislation.

The event started at noon Saturday, after thousands of participants had gathered near the US Capitol. Many young people took to the stage to speak to the crowd, including Yolanda Renee King, granddaughter of Martin Luther King Jr. There were also musical performances by Miley Cyrus, Jennifer Hudson, Demi Lovato, Ariana Grande and Common.

Meanwhile, hundreds of sister marches took place across the country and around the world.

Here are some of the most powerful images we saw from the demonstrations: 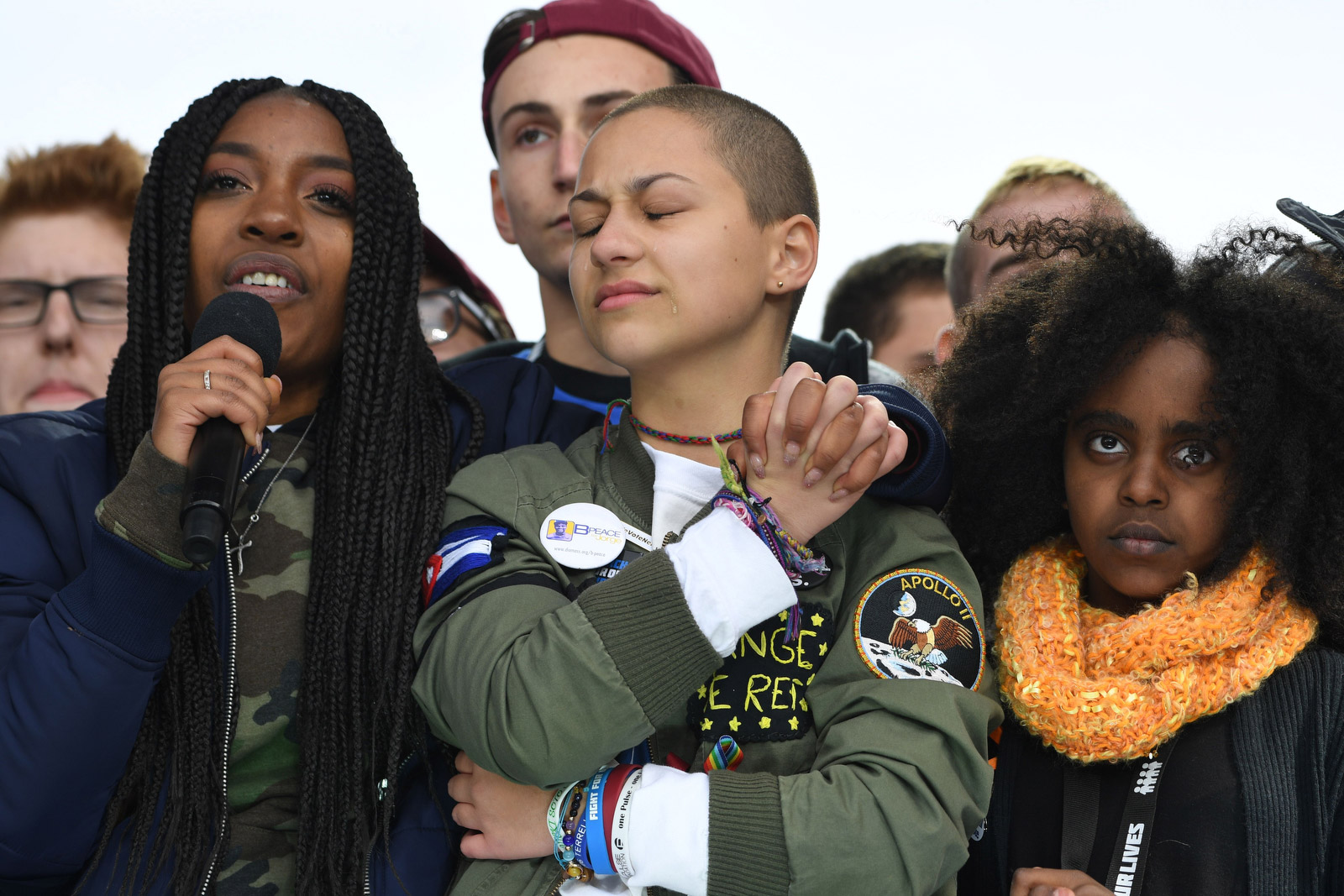 Emma Gonzalez, center, is joined by other students on stage during the rally in Washington. Gonzalez is a survivor of last month’s school shooting in Parkland, Florida. She stood on stage for the length of the gunman’s shooting spree. "Six minutes and about 20 seconds," she said. "In a little over six minutes, 17 of our friends were taken from us, 15 were injured and everyone in the Douglas community was forever altered." Jim Watson/AFP/Getty Images 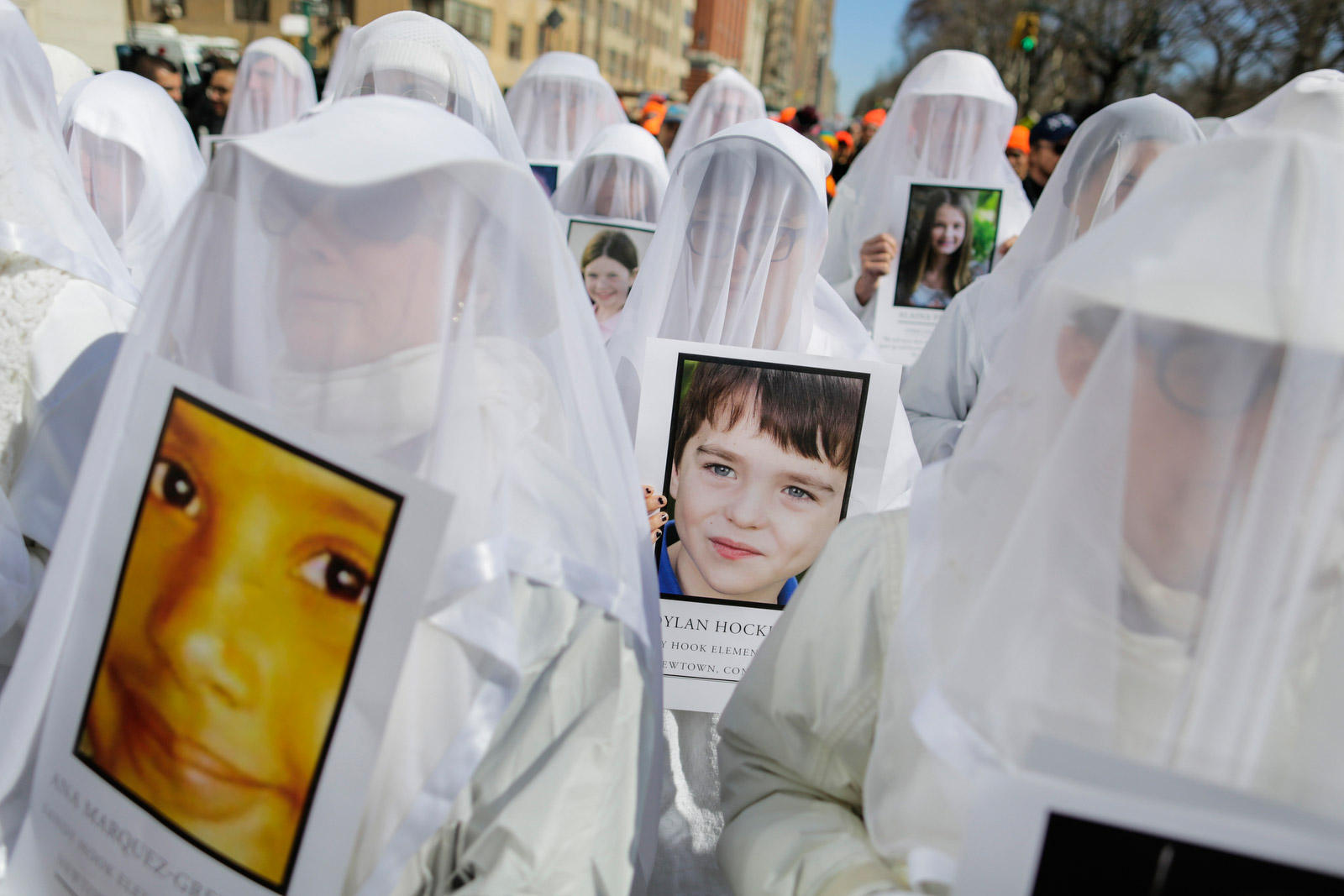 During a march in New York City, people display portraits of children who were killed in the 2012 school shooting at Sandy Hook Elementary School. Edurado Munoz Alvarez/AFP/Getty Images 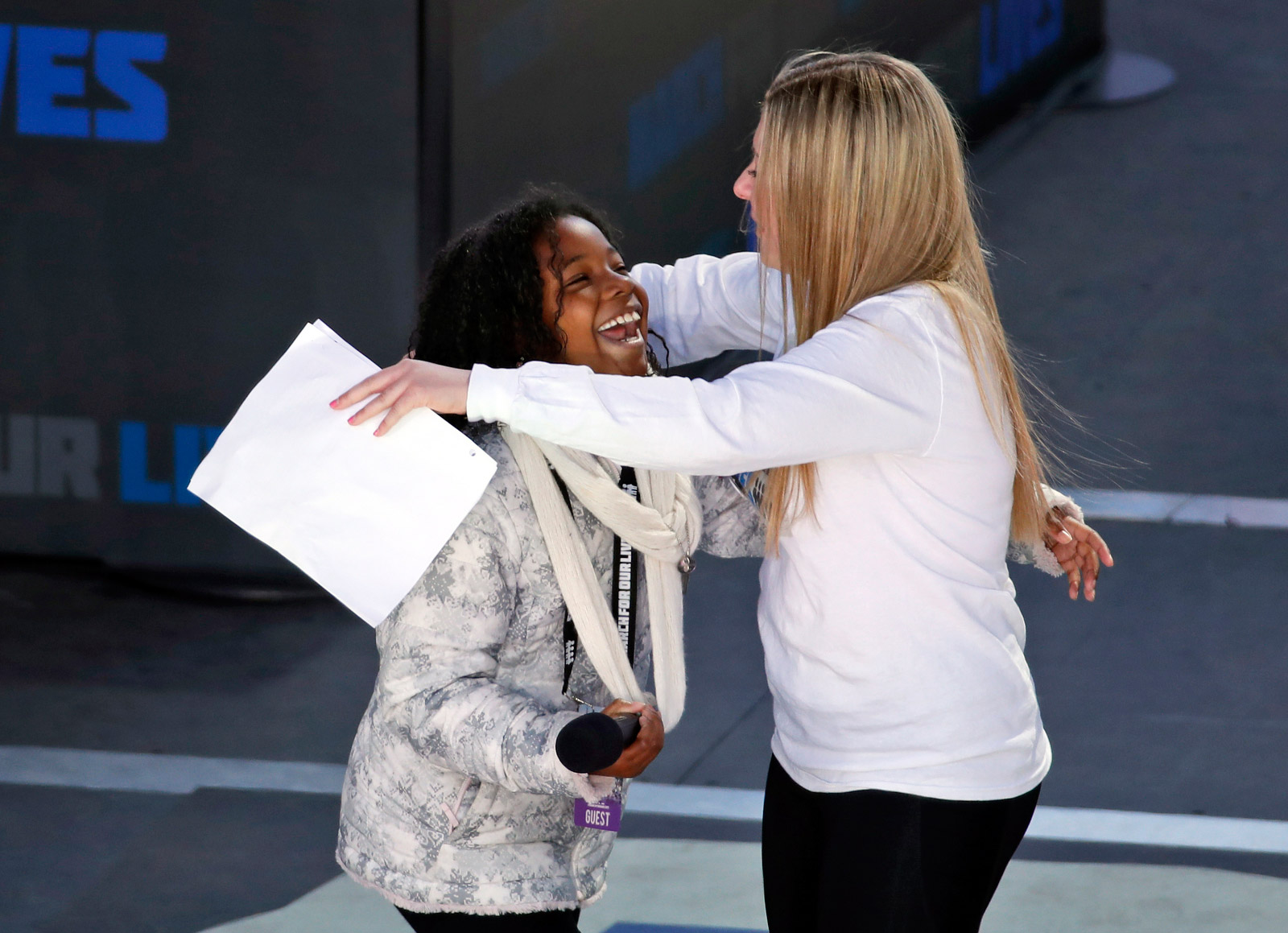 Yolanda Renee King, granddaughter of Martin Luther King Jr., hugs Jaclyn Corin, one of the student organizers of the Washington rally. “My grandfather had a dream that his four little children would not be judged by the color of their skin but by the content of their character,” King said to the crowd. “I have a dream that enough is enough.” Alex Brandon/AP 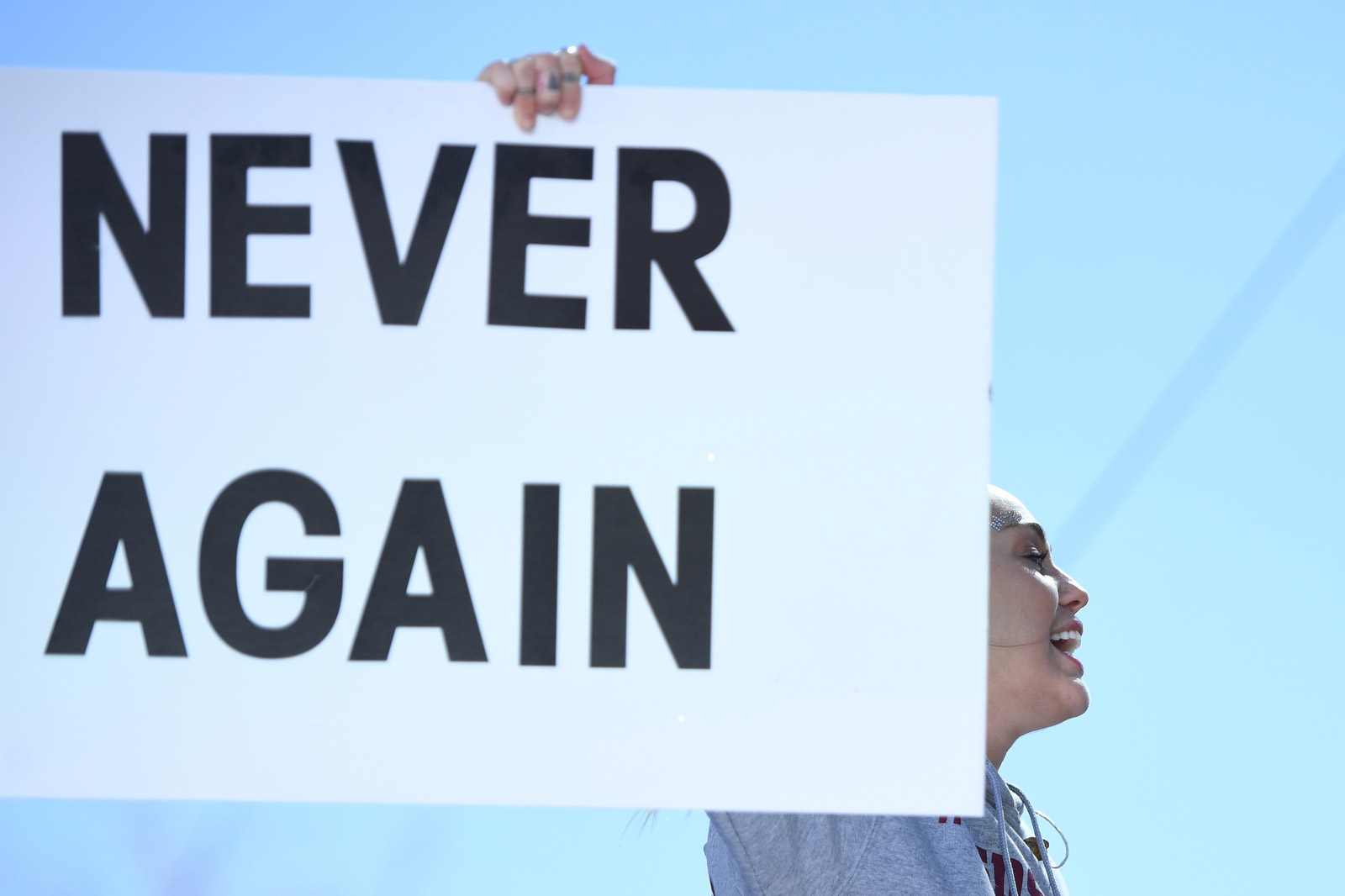 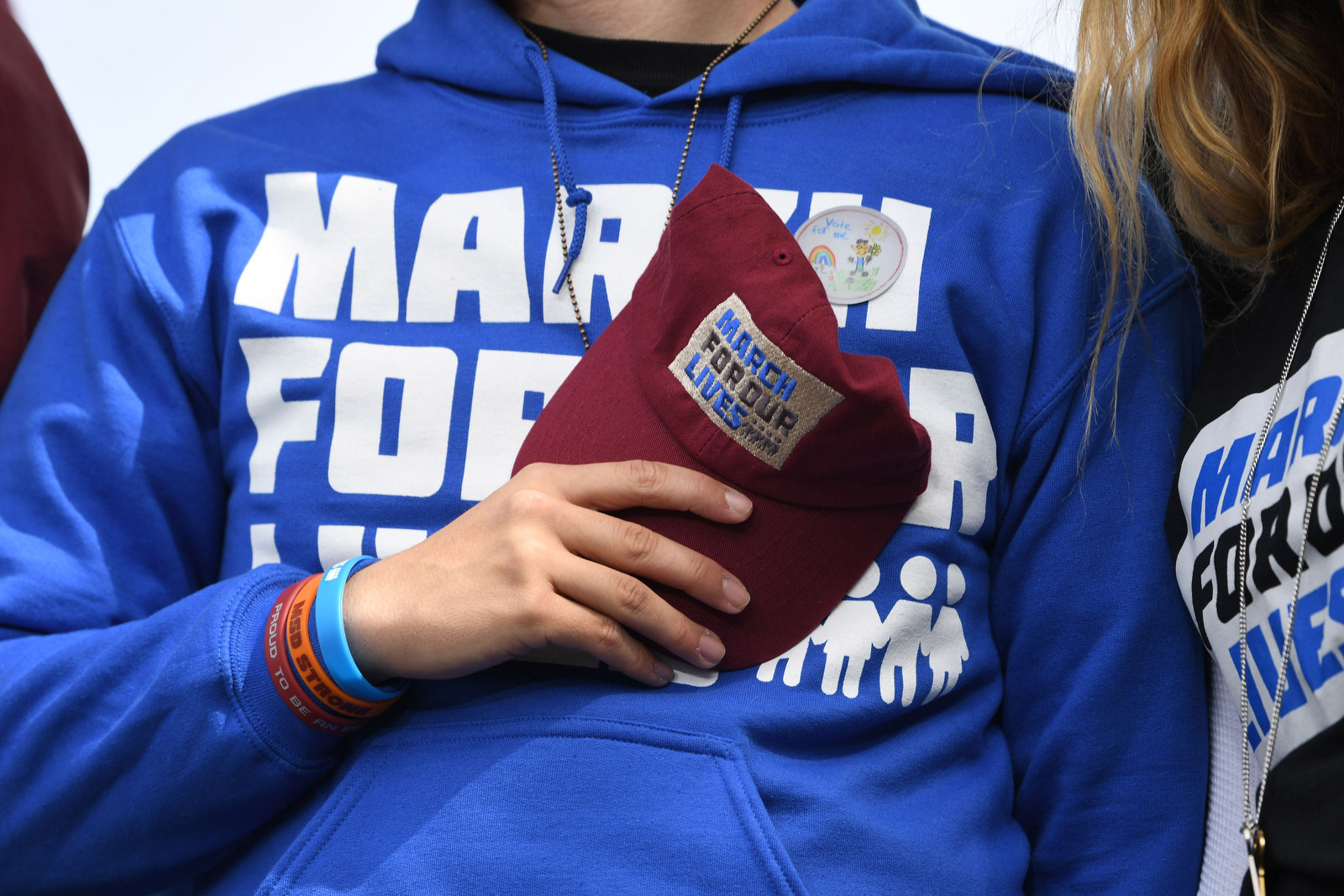 Students gather on stage during the rally in Washington. Jim Watson/AFP/Getty Images 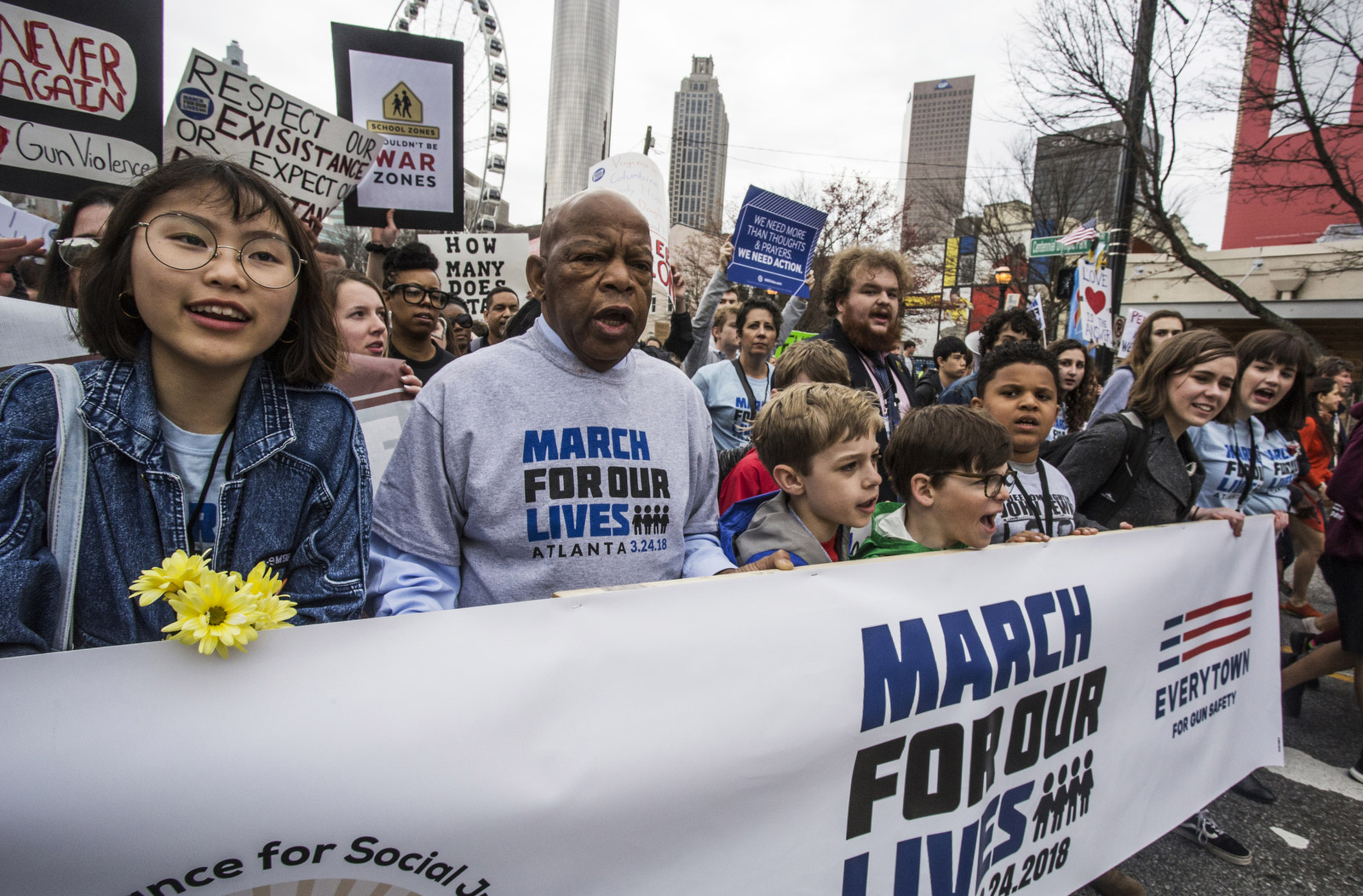 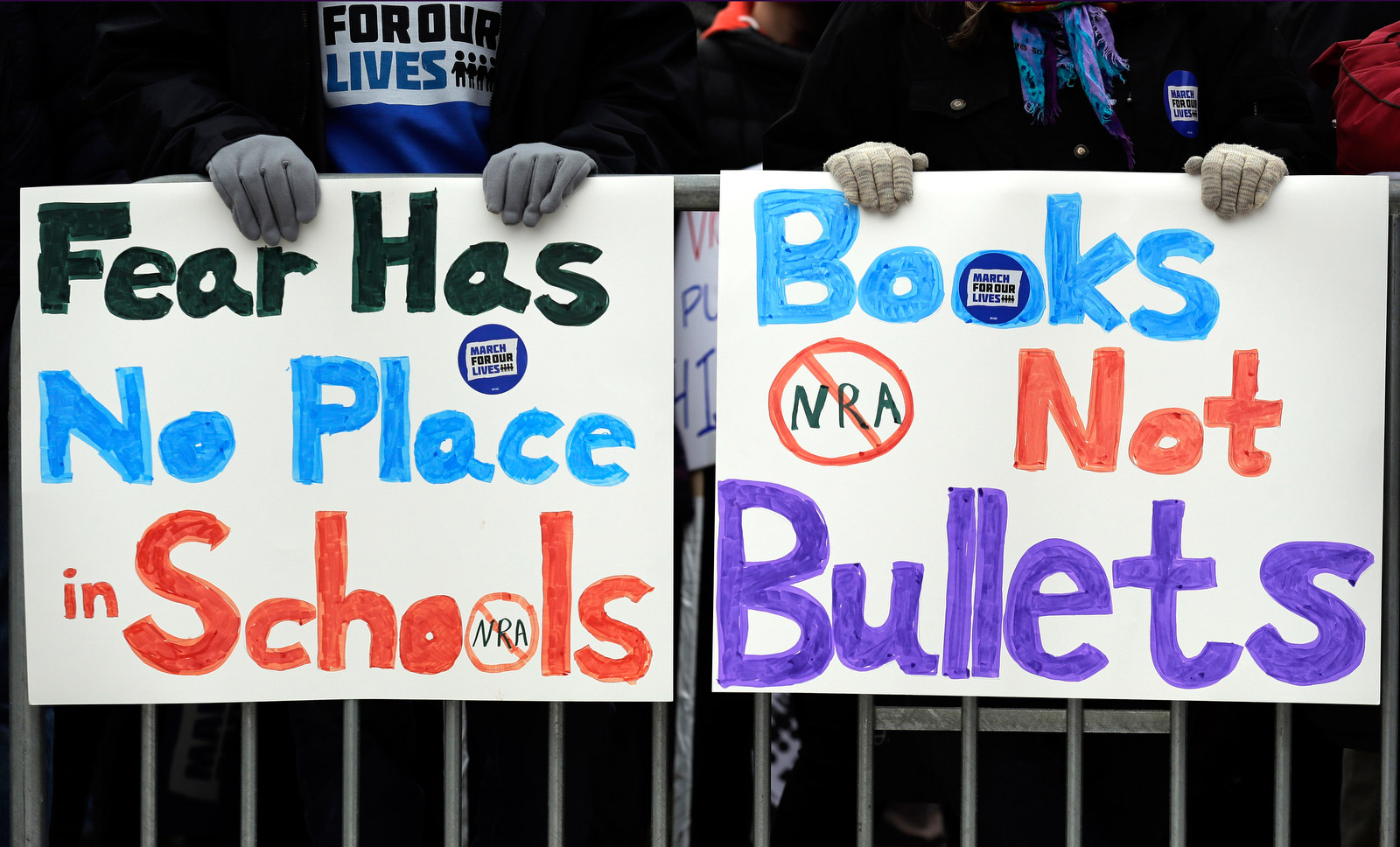 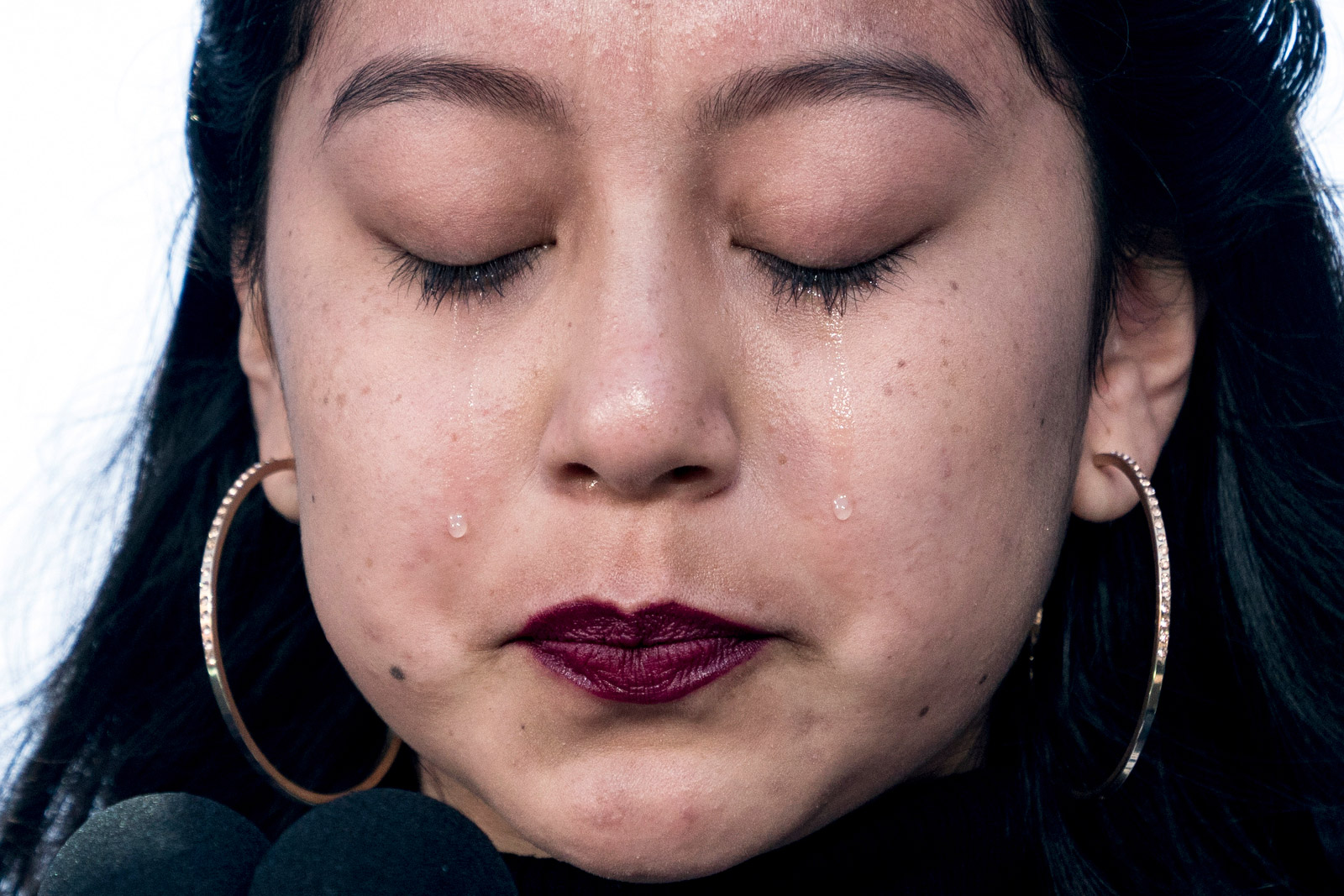 Edna Chavez, a student from Los Angeles, cries as she speaks during the rally in Washington. She lost her brother to gun violence. Andrew Harnik/AP 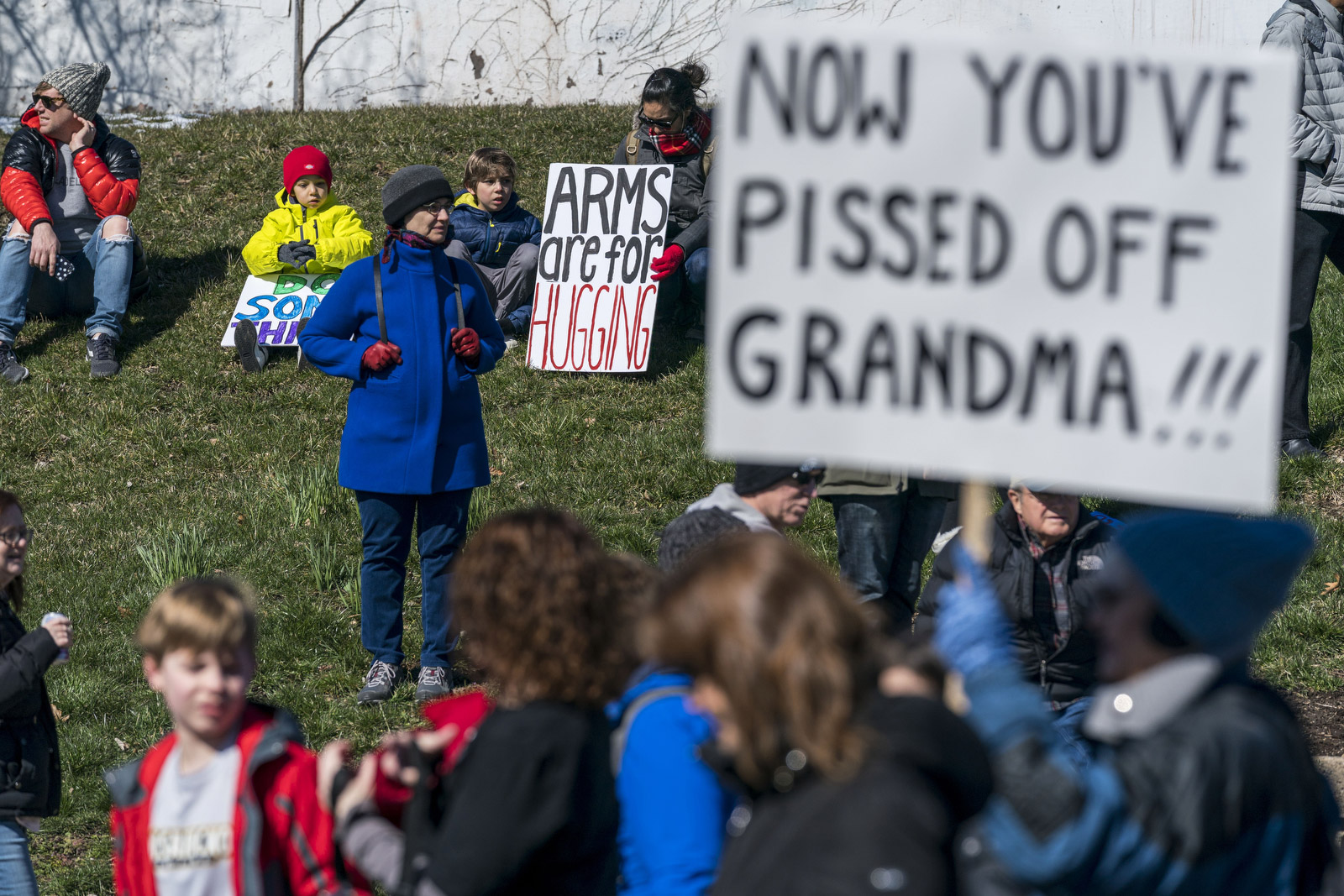 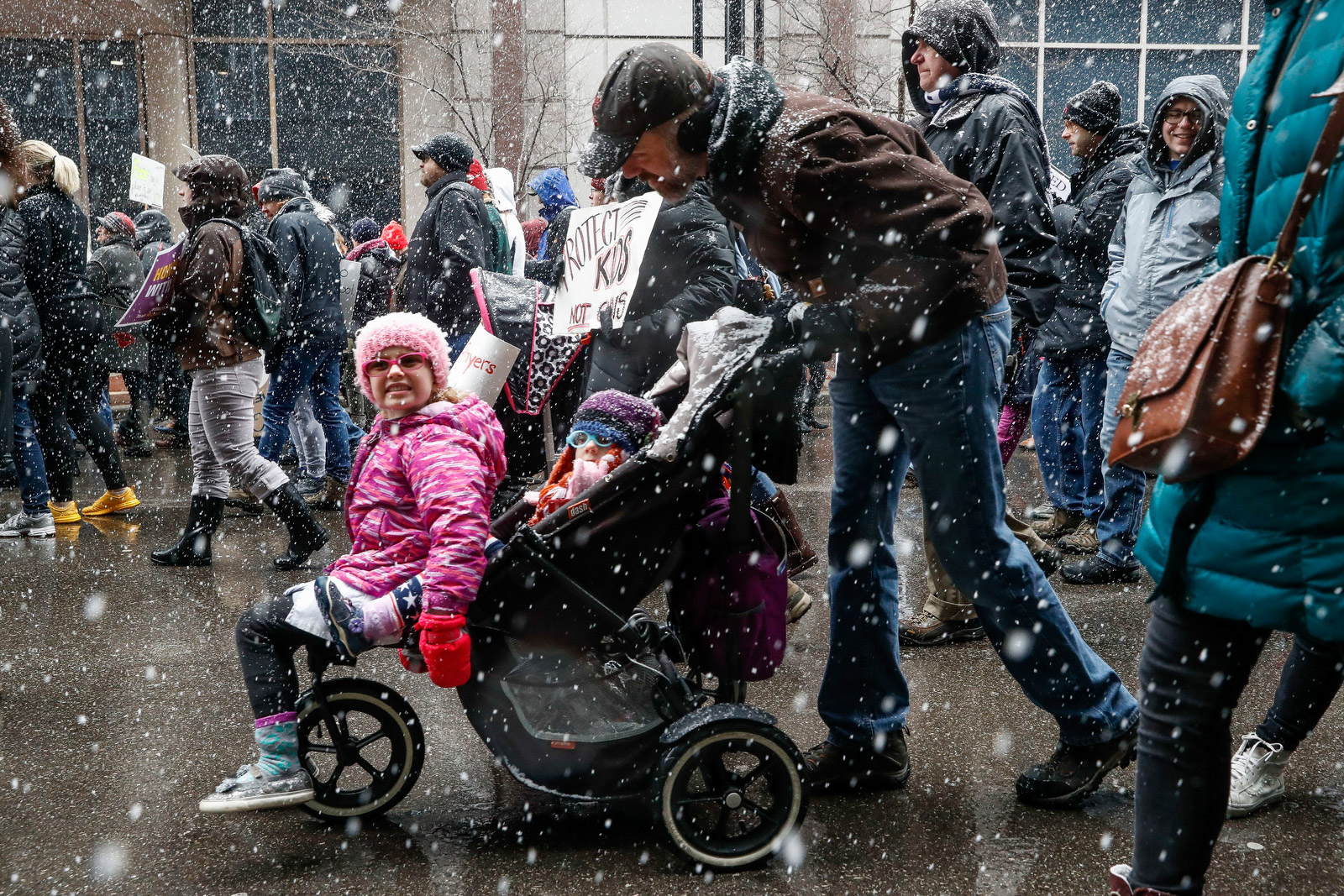 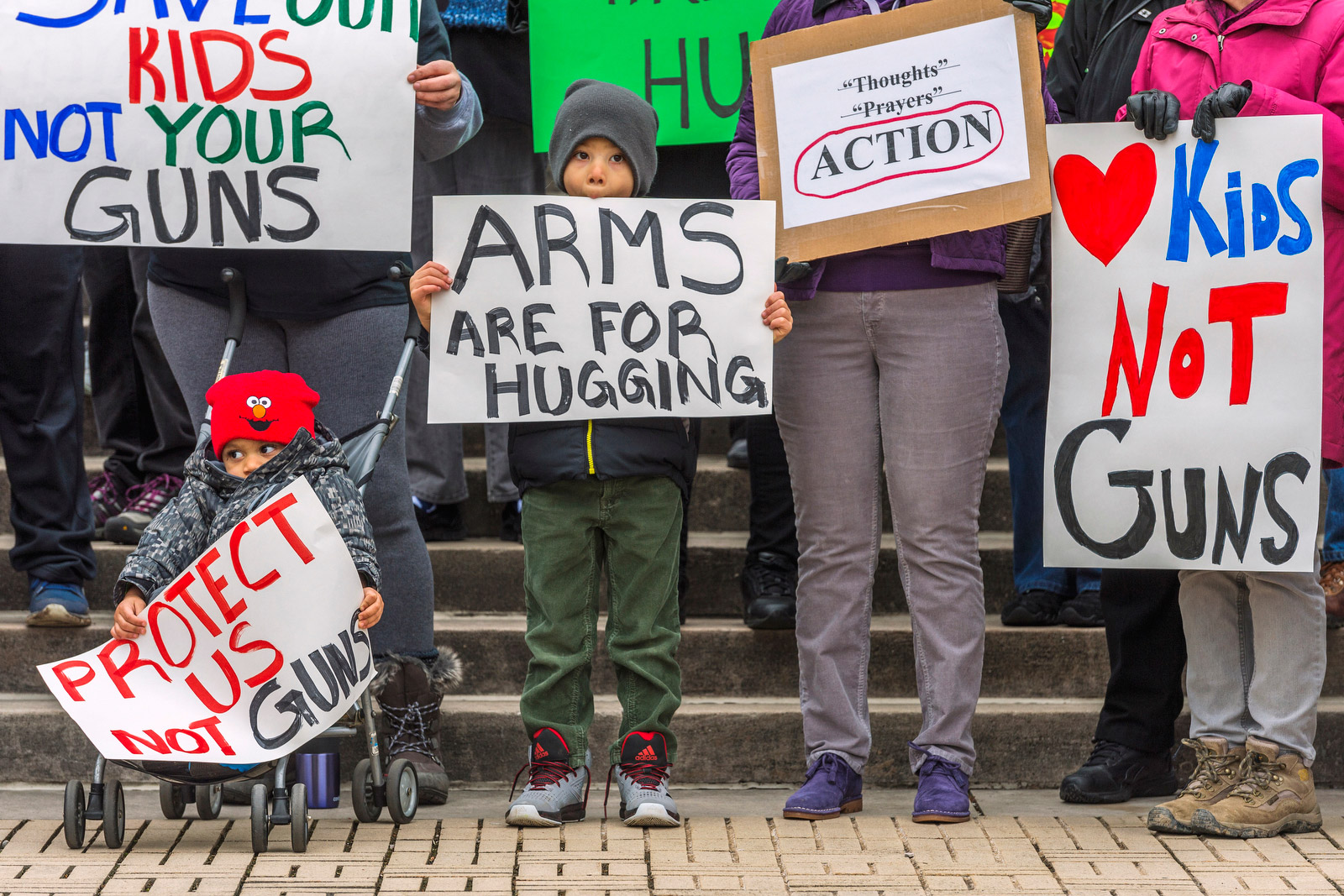 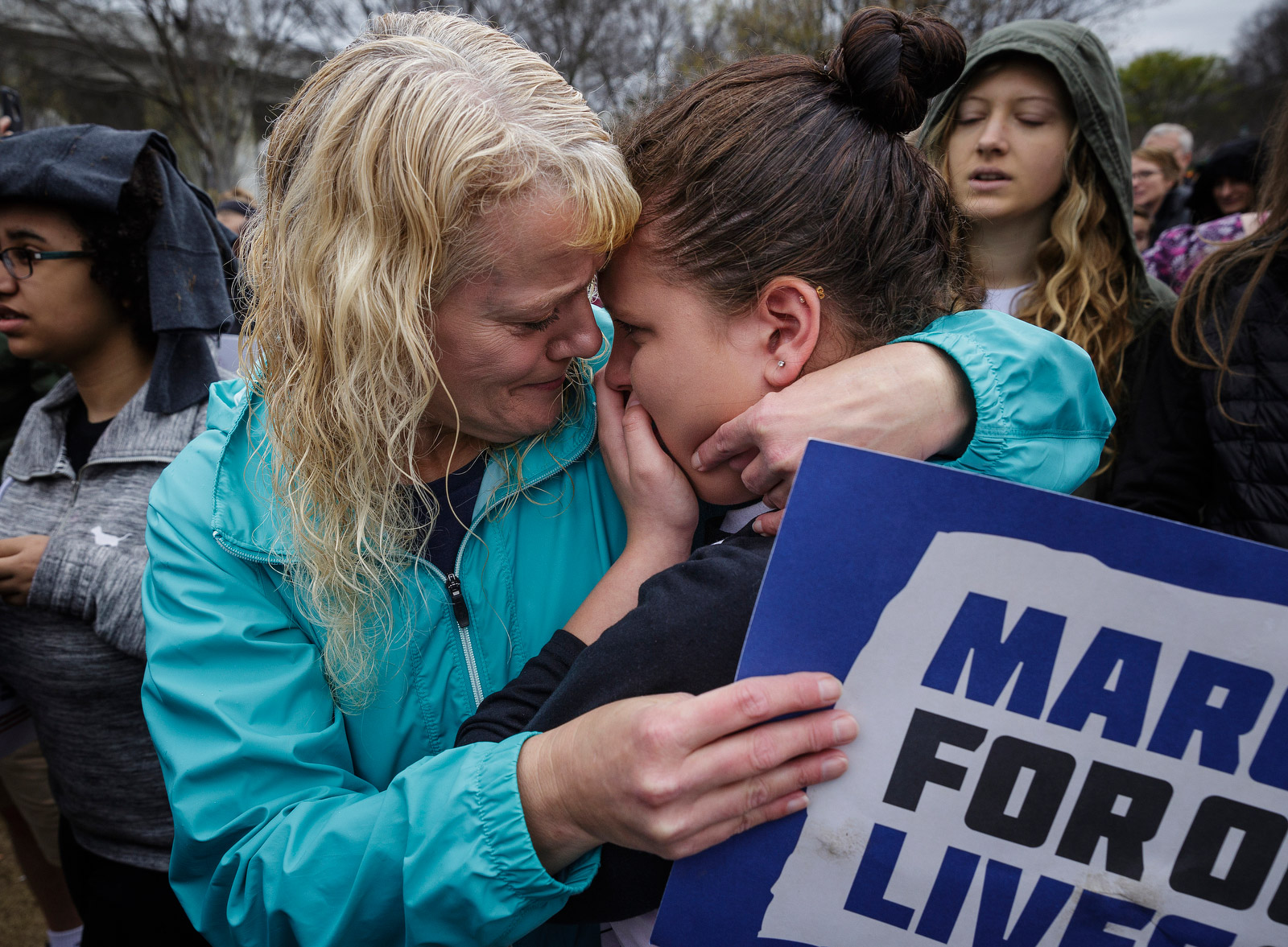 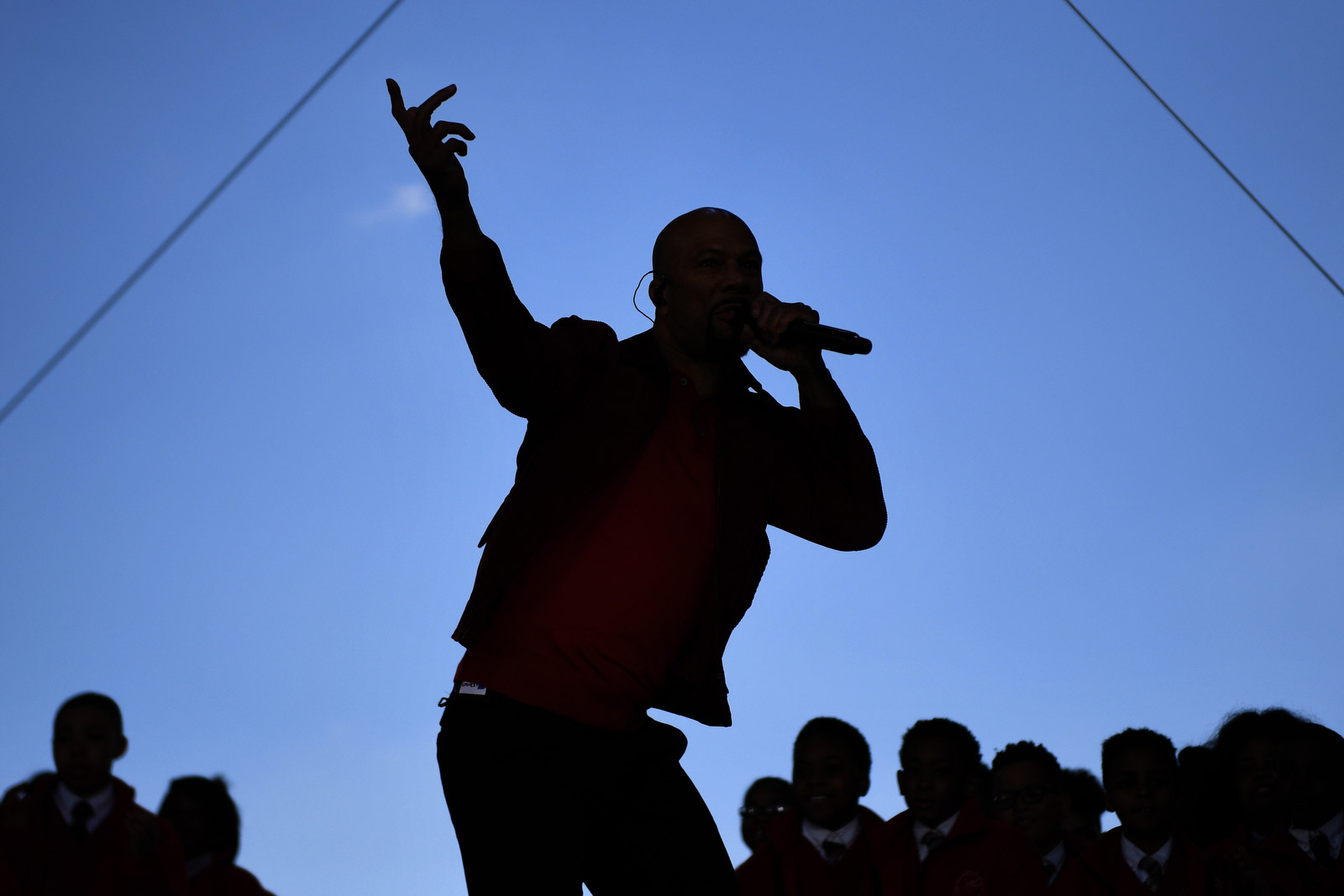 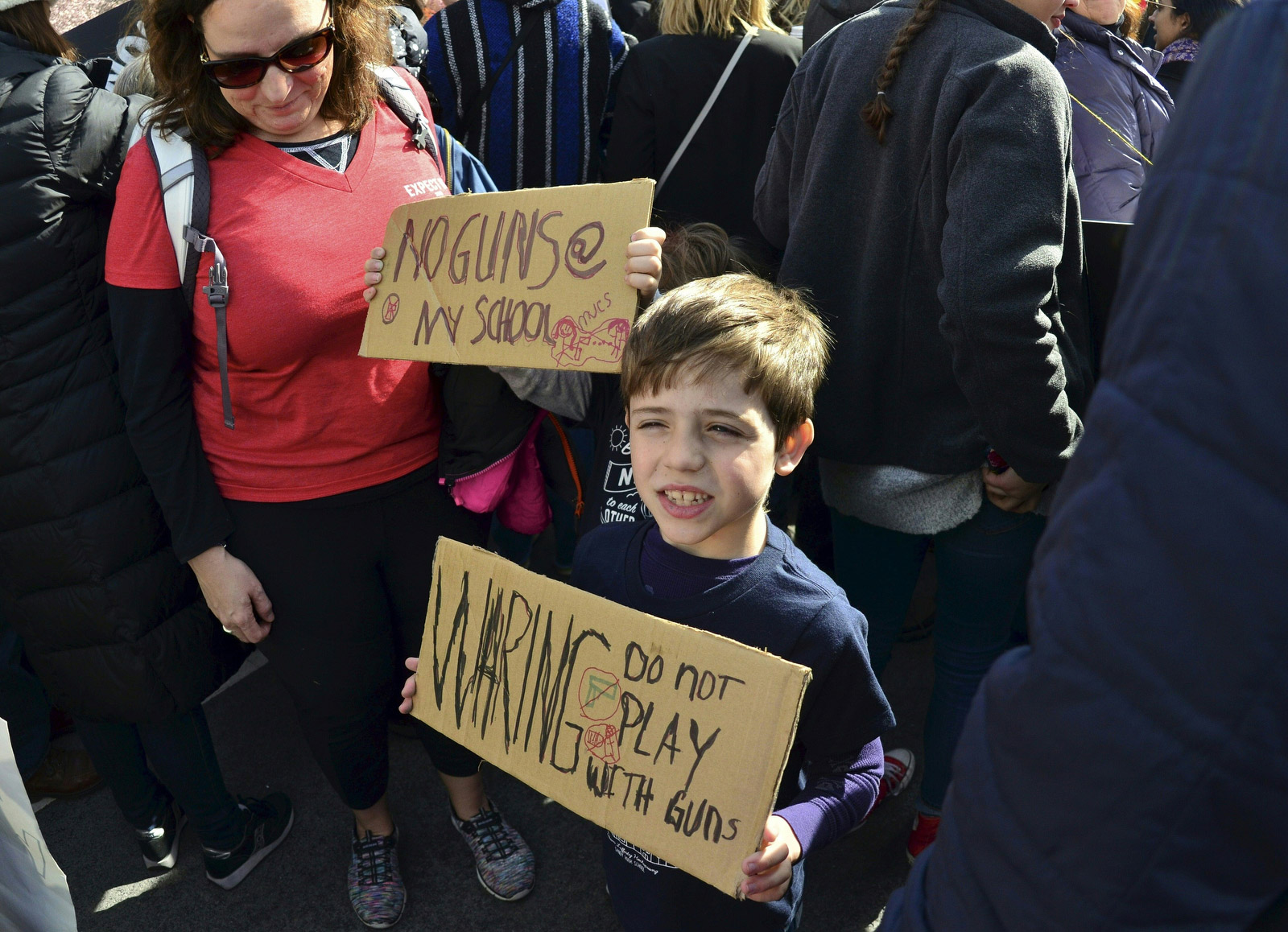 A boy shows off a poster in Washington. Eva Hambach/AFP/Getty Images 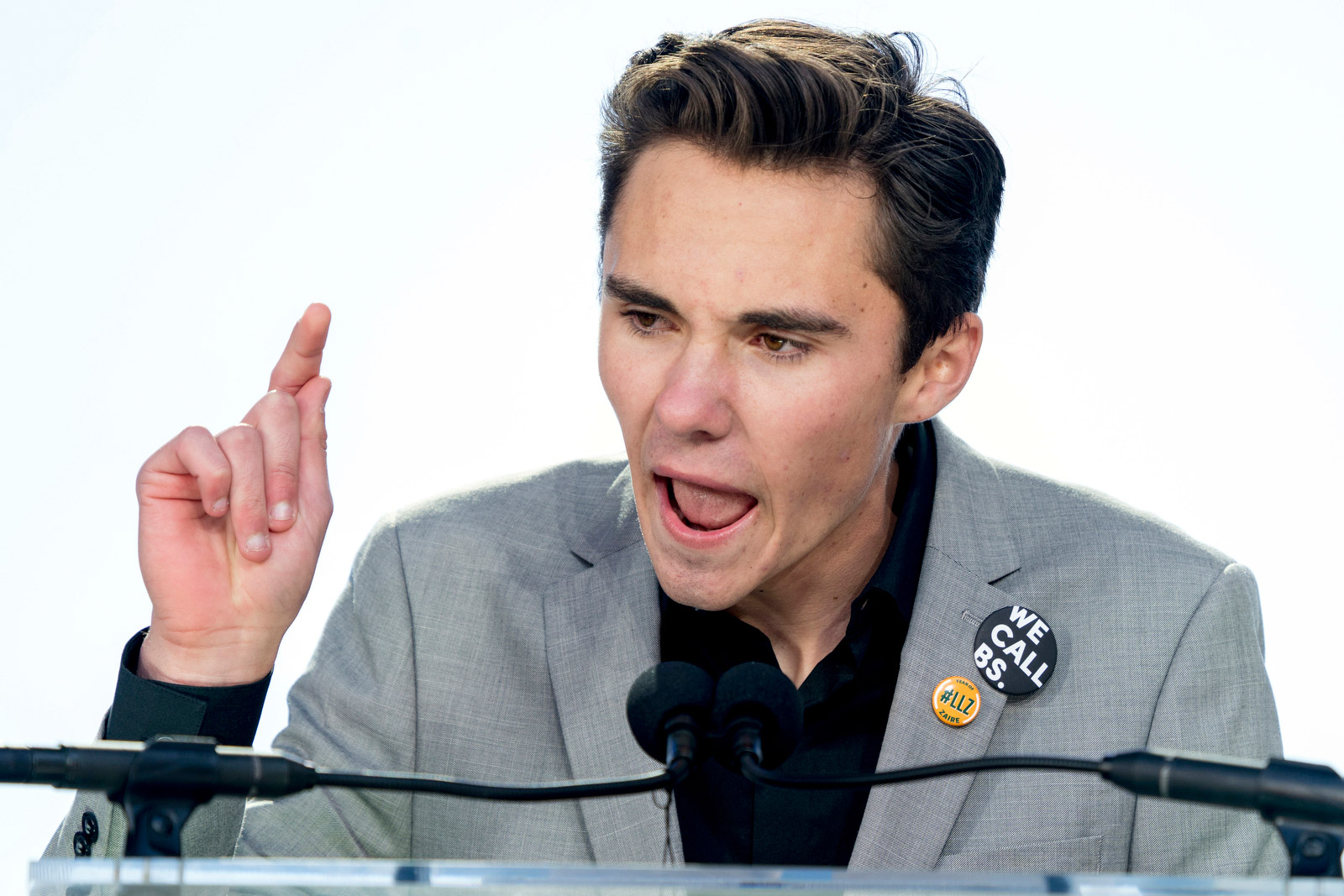 David Hogg, a survivor of last month’s school shooting in Parkland, Florida, speaks to the crowd in Washington. "First-time voters show up 18% of the time in midterm elections. Not anymore," he said. "If you listen real close, you can hear the people in power shaking. They've gotten used to being protective of their position, the safety of inaction. Inaction is no longer safe. And to that we say no more.” Andrew Harnik/AP 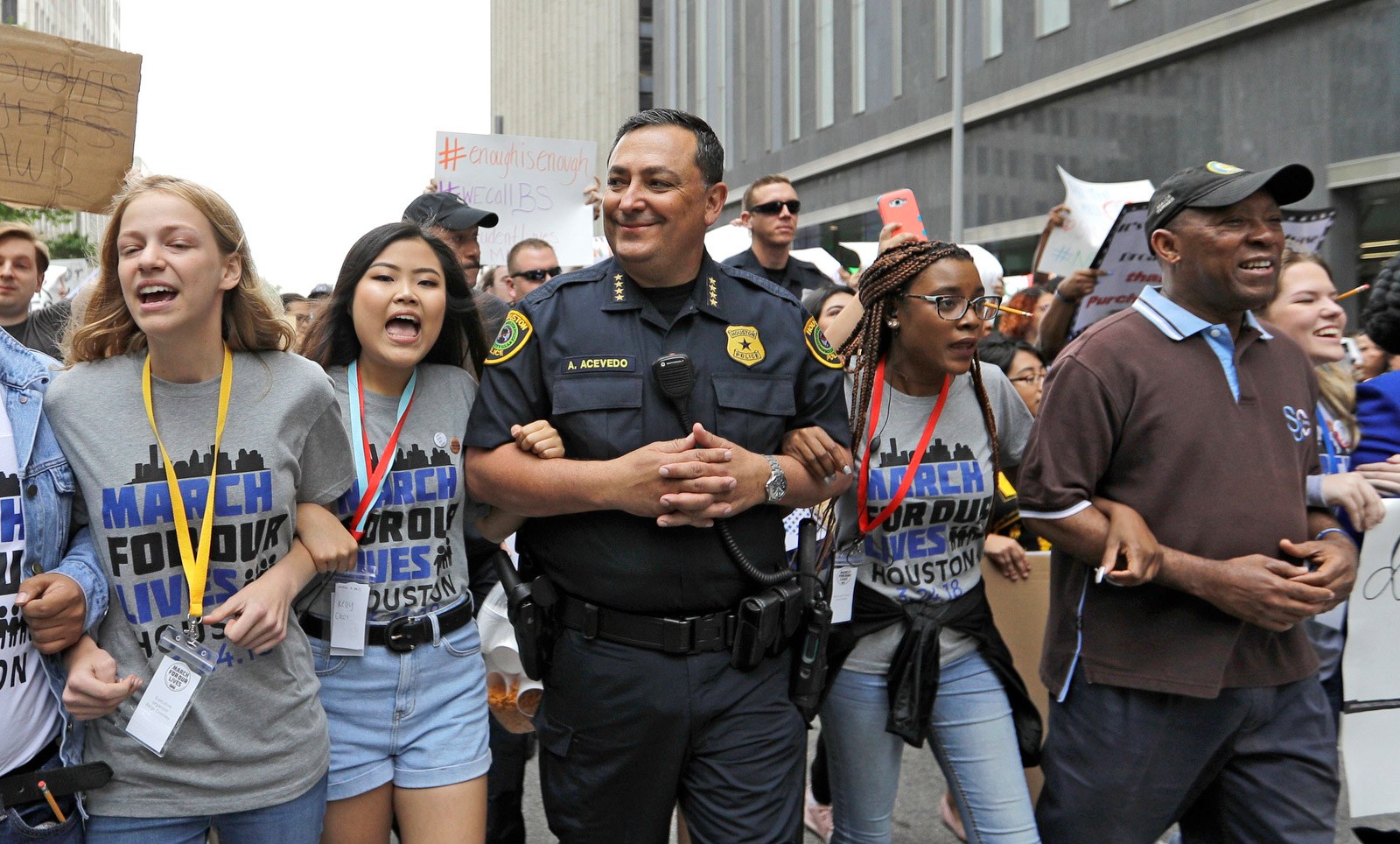 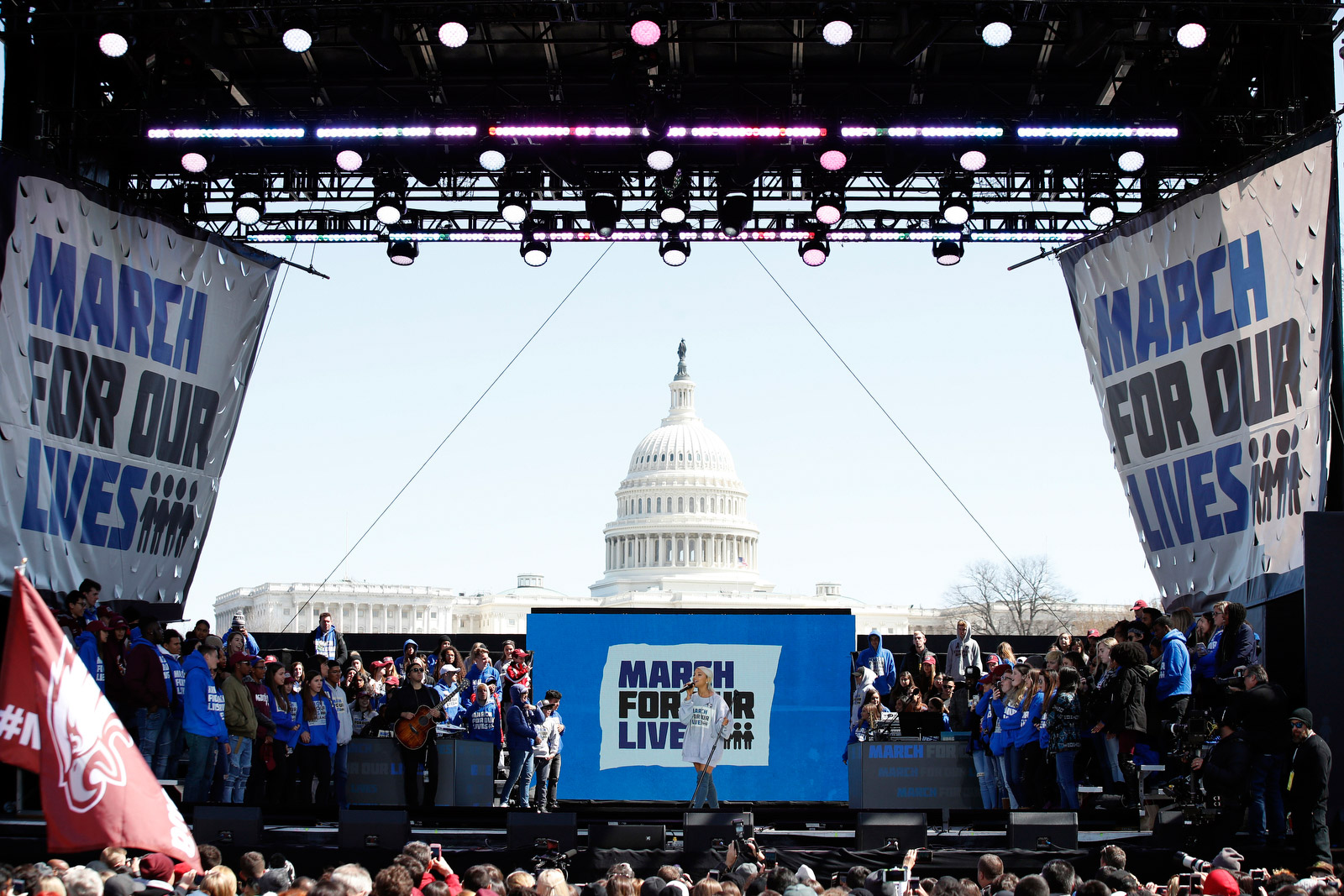 Ariana Grande performs during the rally in Washington. Alex Brandon/AP 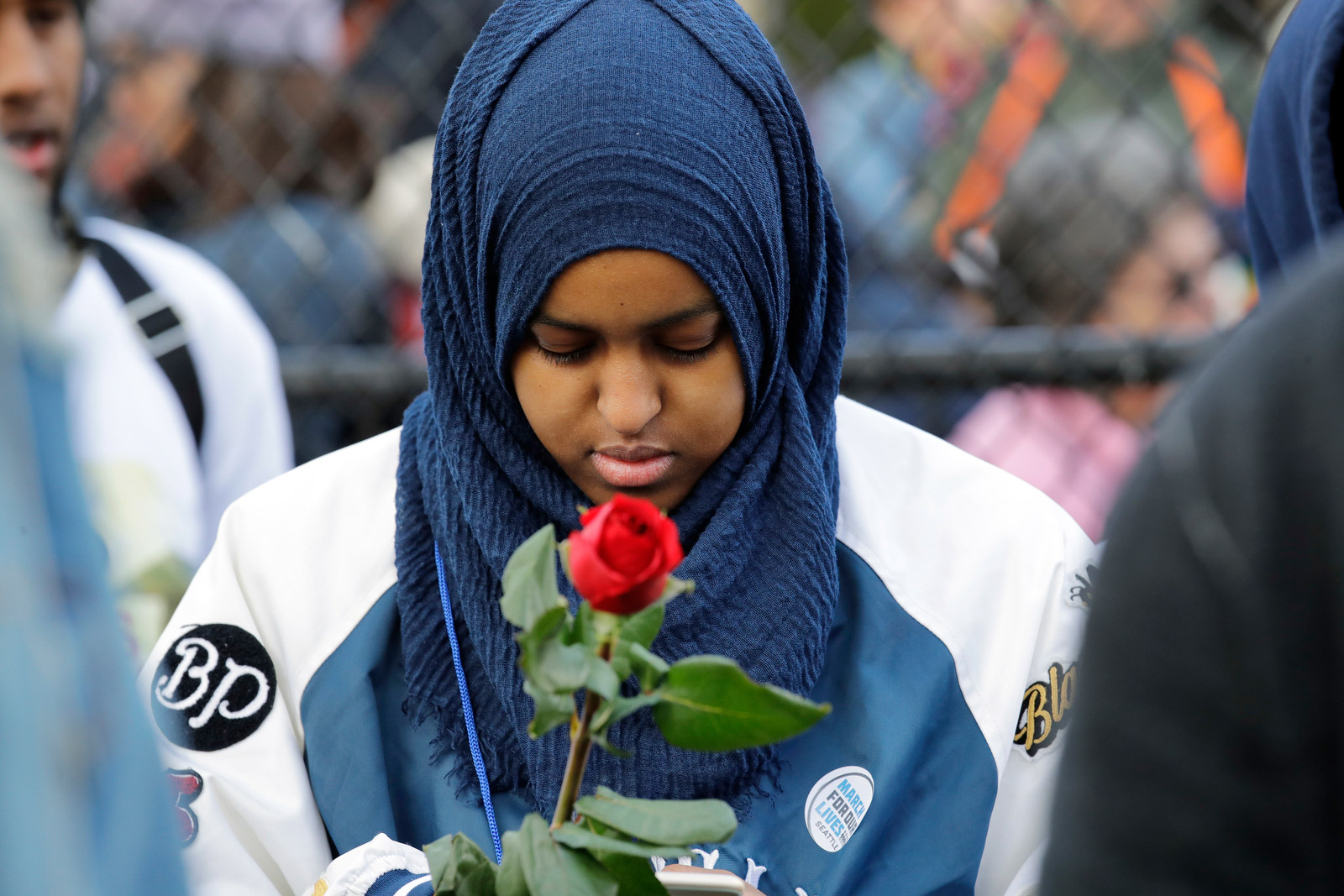 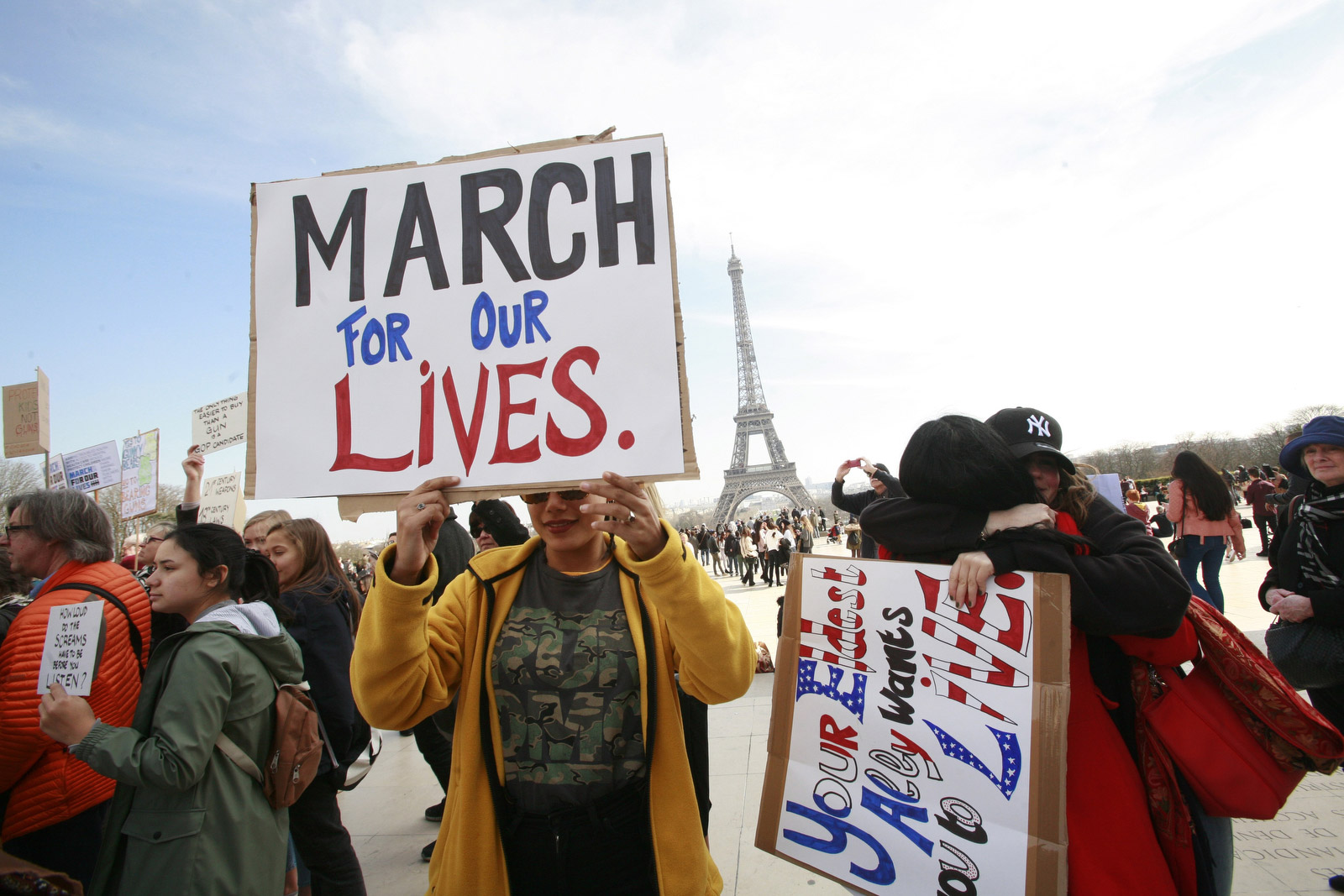 A group protests in front of the Eiffel Tower in Paris. Owen Franken/Corbis/Getty Images 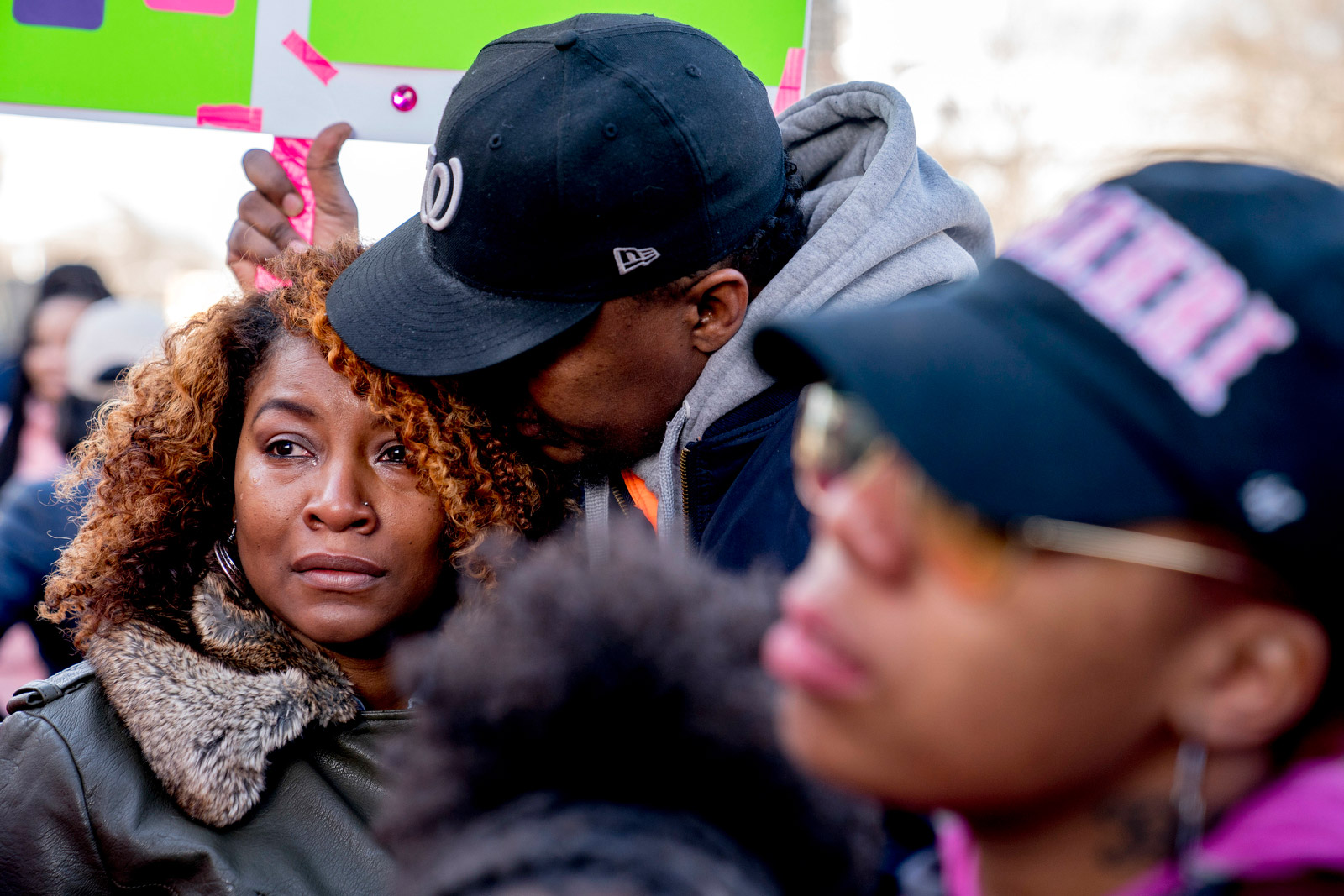 Taurica Haskins is comforted by her husband, Alden, as they arrive at the rally in Washington. They were among the family members marching in memory of Jamahri Sydnor, a 17-year-old victim of gun violence who was killed in August. Andrew Harnik/AP 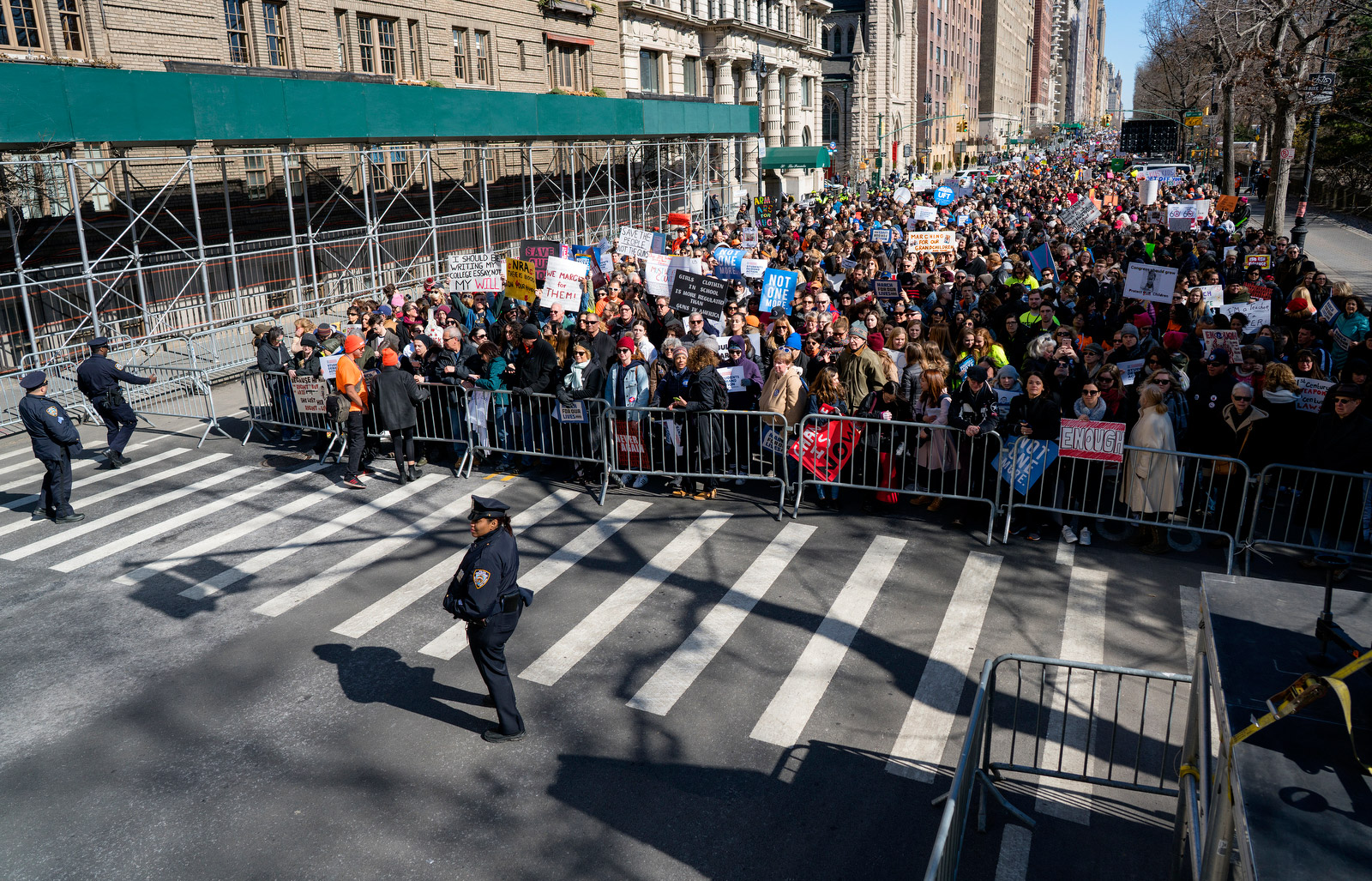 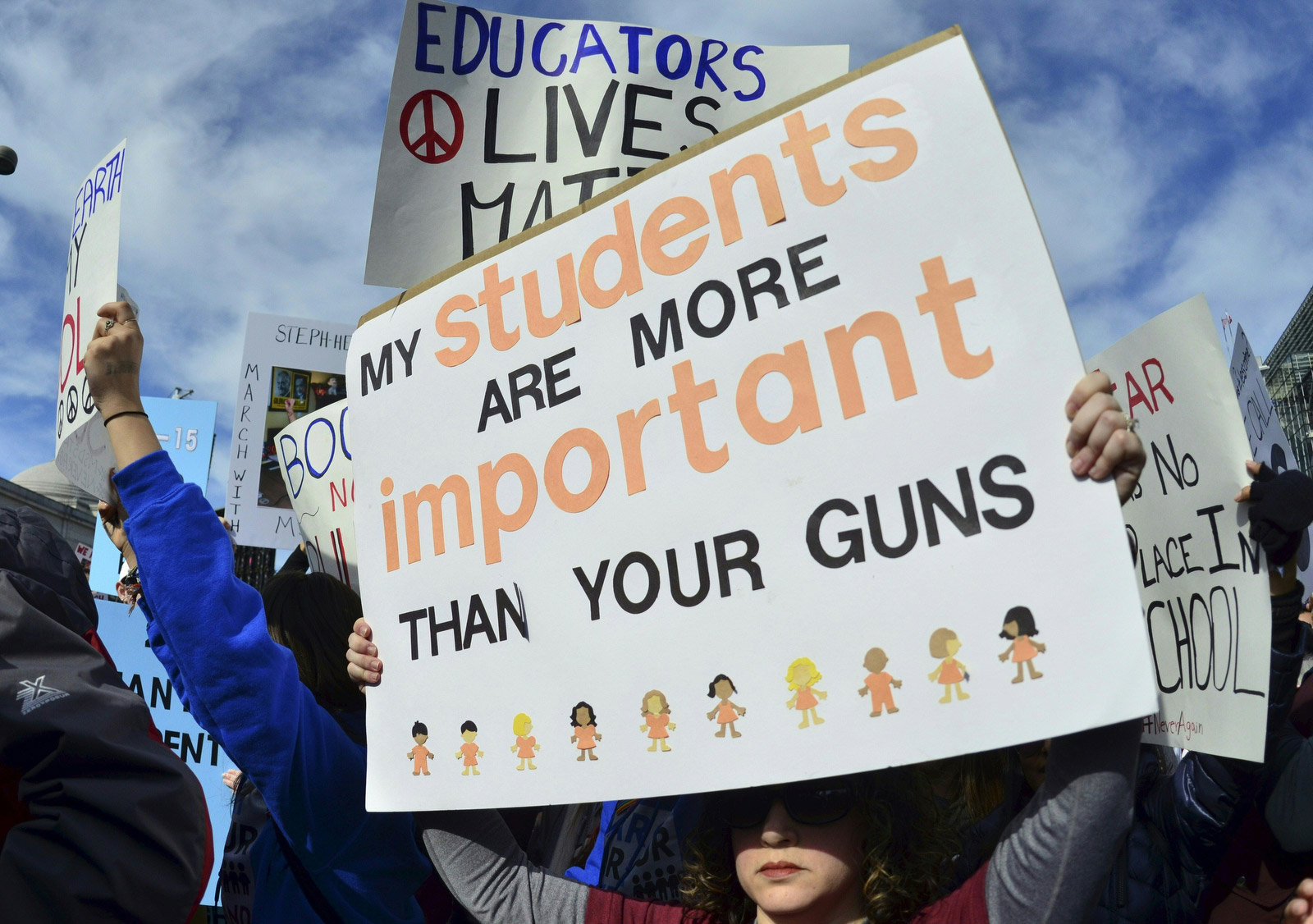 A teacher holds up a poster in Washington. Eva Hambach/AFP/Getty Images 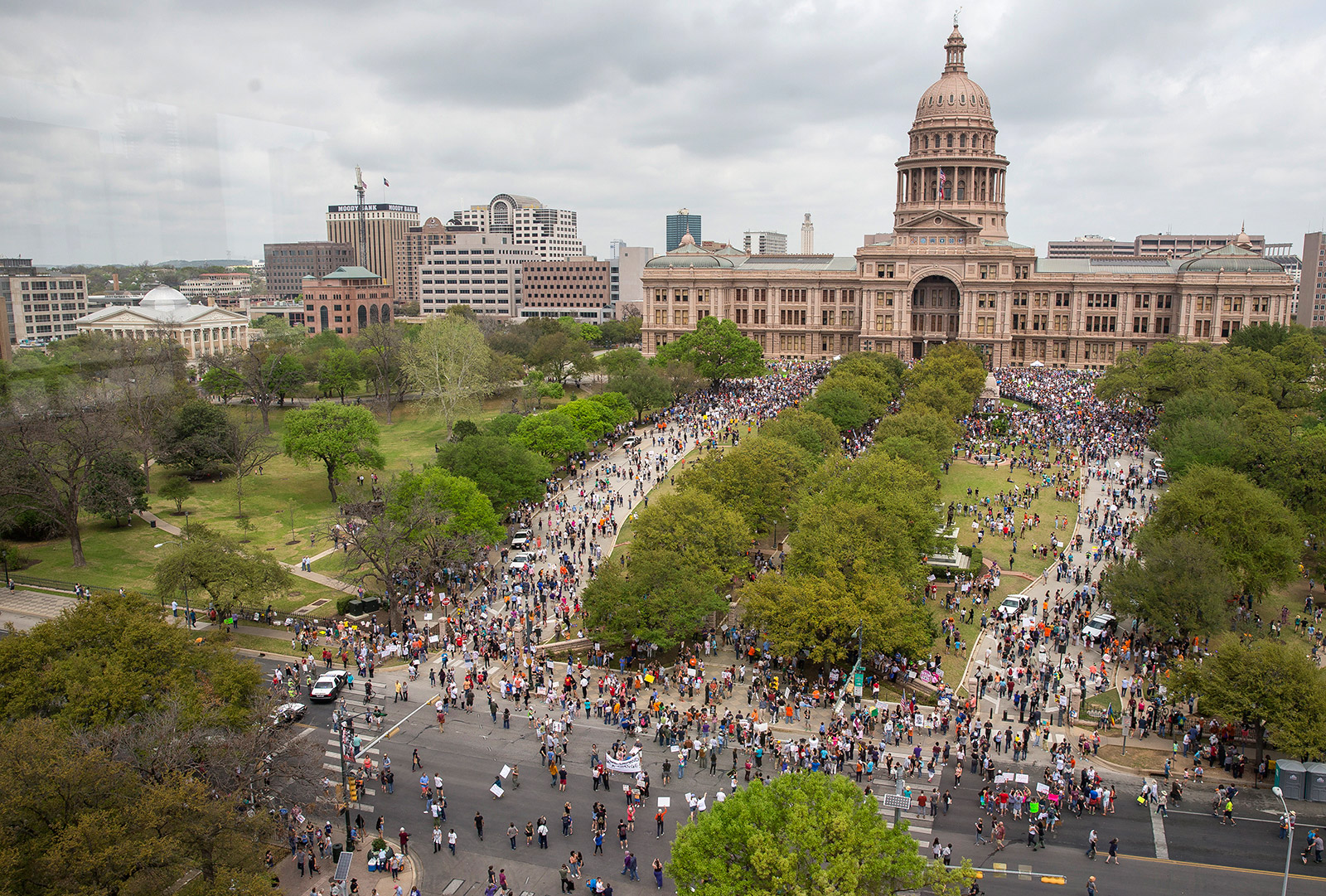 People gather on the grounds of the Texas State Capitol during a rally in Austin. Nick Wagner/Austin American-Statesman/AP 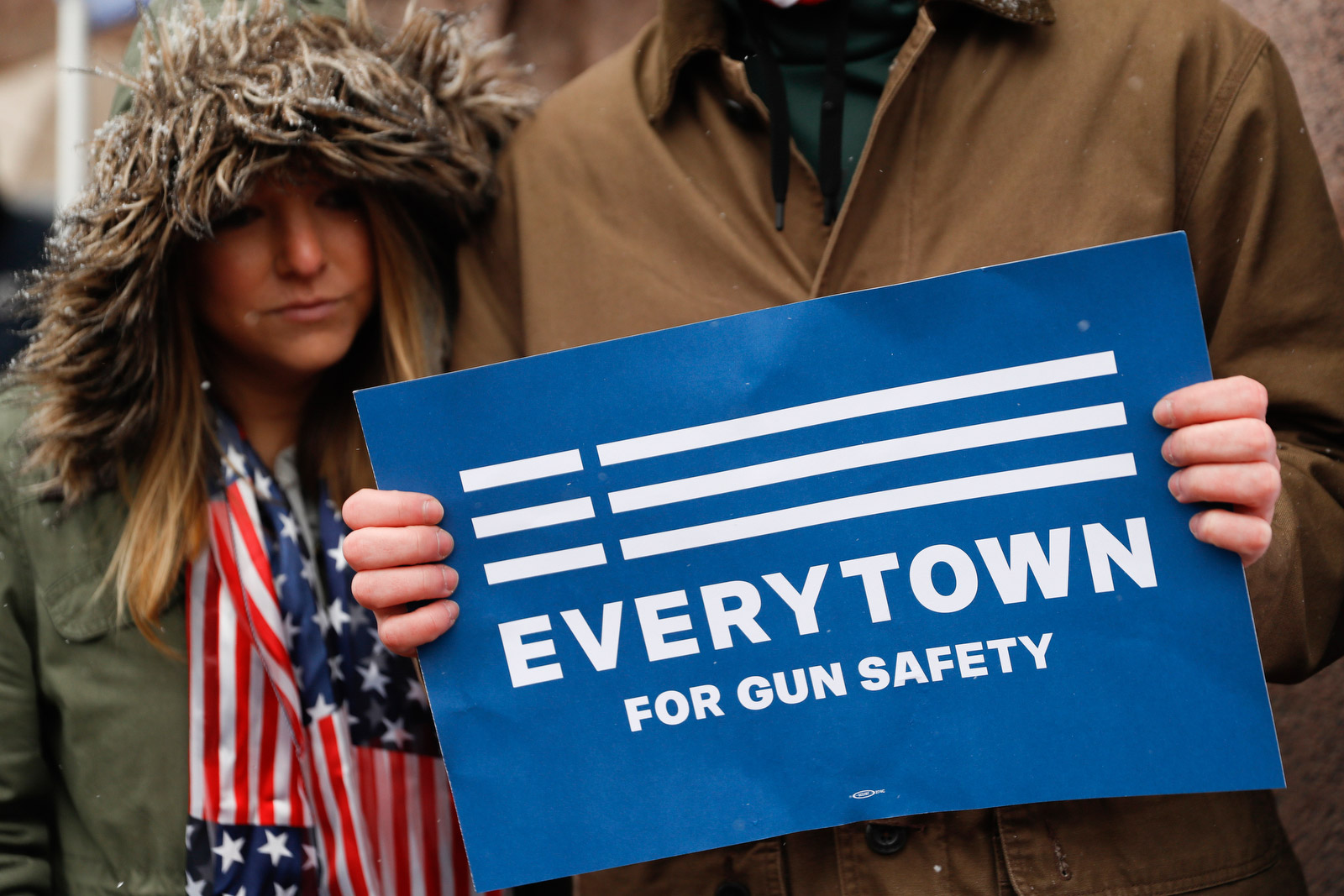 Protesters gather outside City Hall in Cincinnati. Everytown for Gun Safety is the gun advocacy group that worked with students to helped plan and coordinate March for Our Lives. John Minchillo/AP 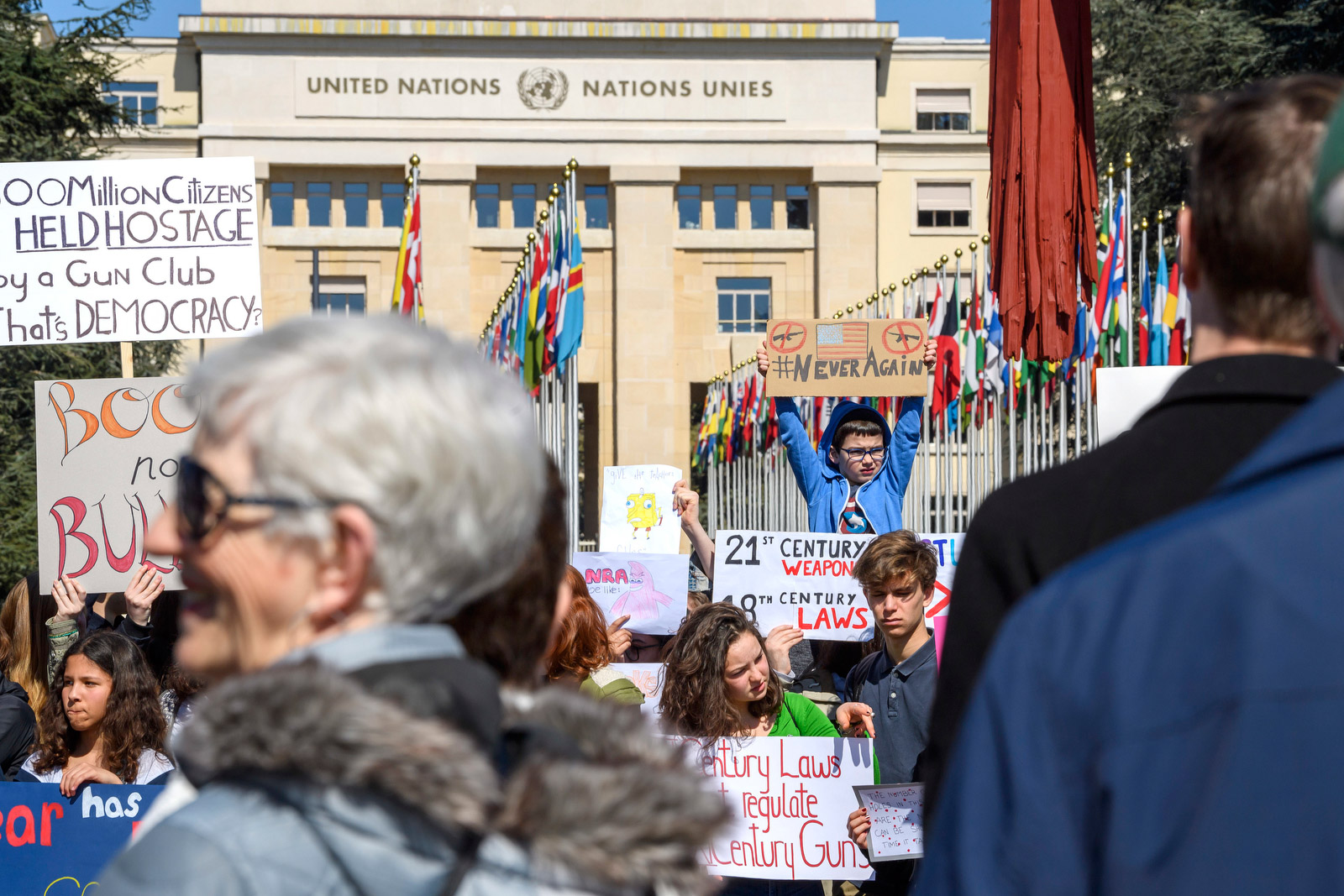 American students and expatriates hold signs as they rally in front of the United Nations’ European headquarters in Geneva, Switzerland. Martial Trezzini/Keystone/AP 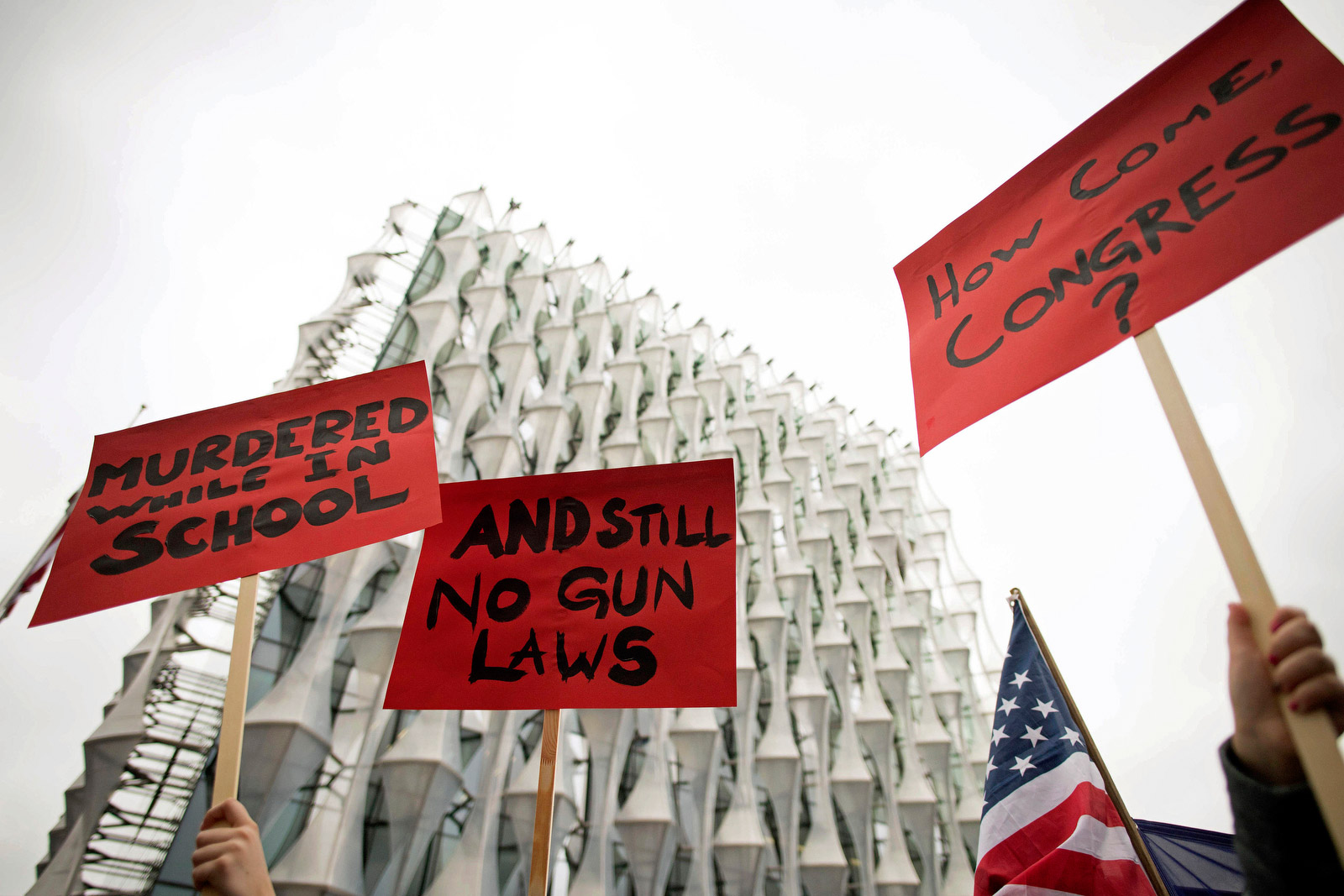 Protesters hold up signs outside the US Embassy in London. The signs resembled the billboards from the award-winning film “Three Billboards Outside Ebbing, Missouri.” Stefan Rousseau/PA/AP 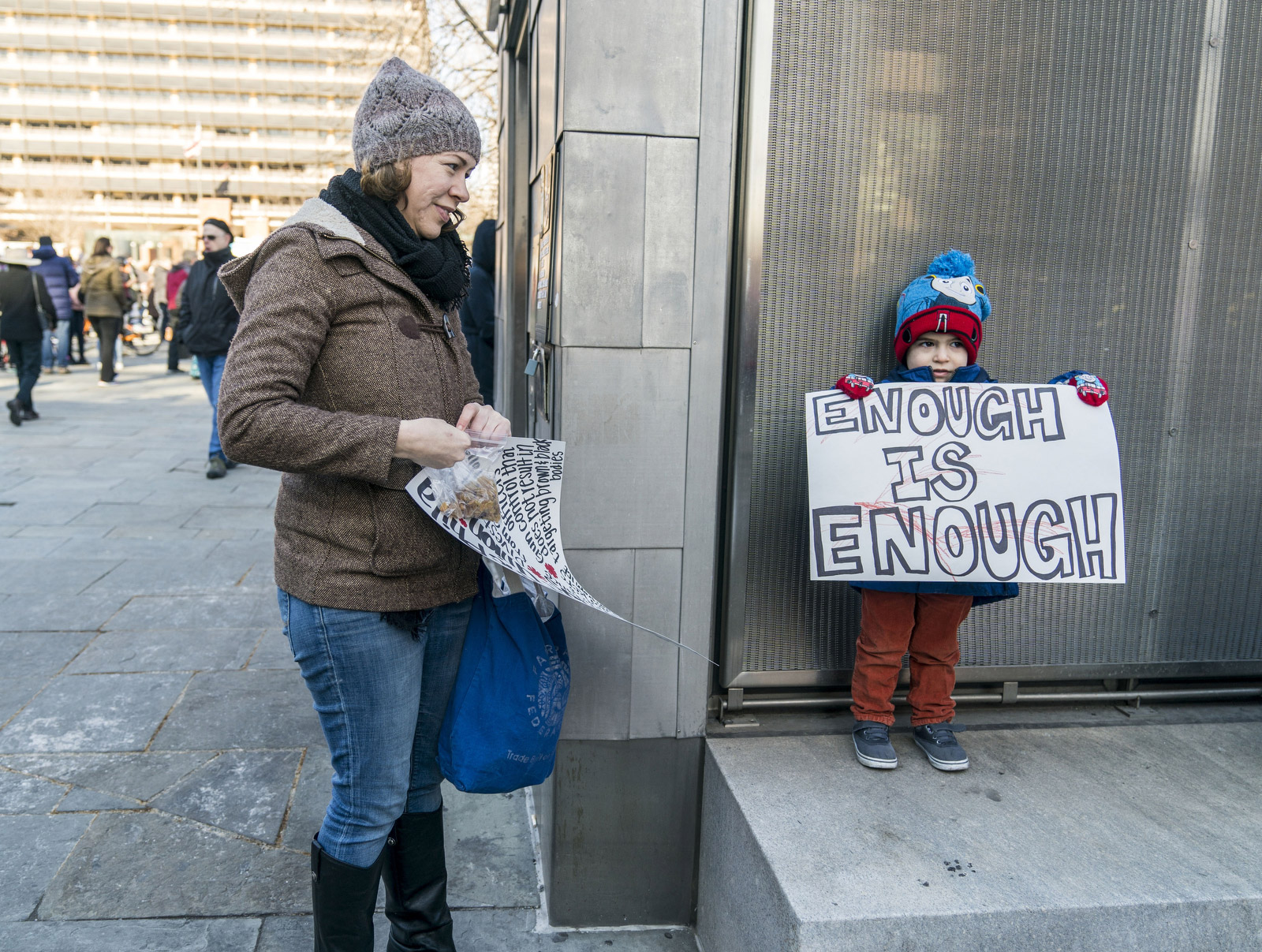