This year has been terrible for wildfires, and the ones currently blazing a path of destruction through Southern California are shaping up to the be the worst of the worst. Remember the wildfires that devastated Northern California wine country in October? The Thomas Fire, which is the largest of the fires currently burning, is three times larger than the largest of the wine country fires.

The blazes are massive, dramatic and dangerous. Here’s why they’re so historic, and how they’re affecting everything: Traffic, weather, thousands of lives and homes, and the future of one of America’s largest, most populous cities.

They could be the most destructive in California history

There are four different fires burning in the Los Angeles area. The biggest, the Thomas fire, has already burned 96,000 acres north of Los Angeles – an area more than twice the size of Washington, DC. In fact, it is on pace to become one of the most destructive fires in the state’s history. It’s also raging at a shocking pace. At one point, it spread over 31,000 acres in about nine hours. That’s an acre a second.

The entire LA area is at risk

So far, more than 110,000 people in the area have been forced to leave their homes, but the scary thing is, the entire LA metro area – and the millions that live there -- could be in danger. On Thursday, fire officials even upgraded their color-coding system to include a historically high level for the first time: Purple, seen below, which indicates the most extreme fire risk. It may not get better soon, either. Improvement in the area’s fire conditions are supposed to be slow over the weekend. 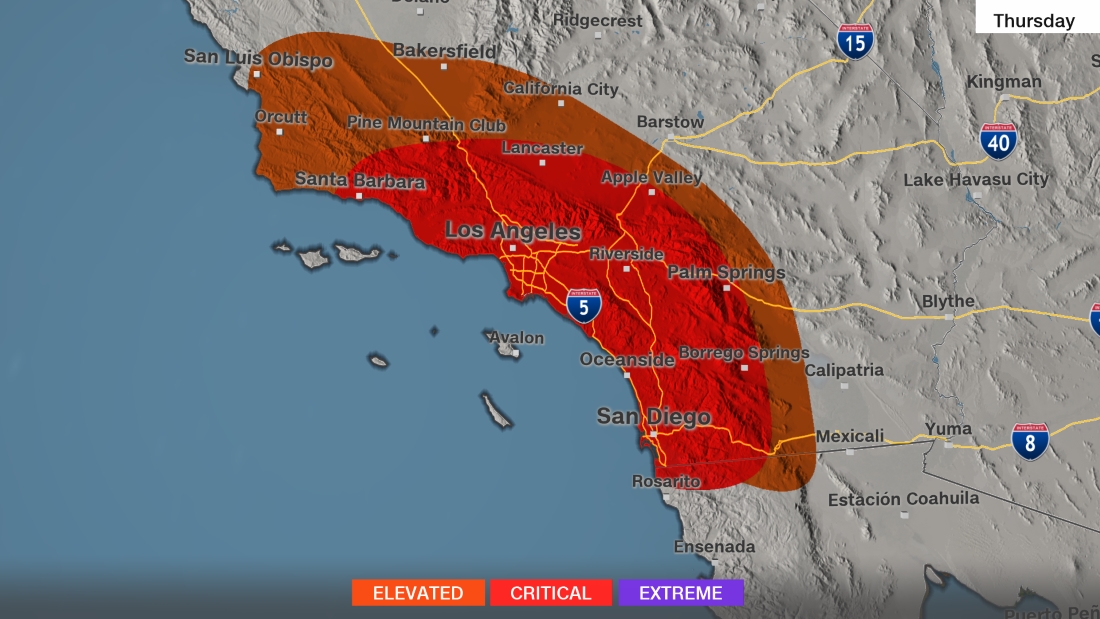 The air is dry, which isn't helping

Humidity levels have been in the single digits all week, which indicates just how dry the air is right now. Dry air makes it easier for fires to spread, and for the next few days, it looks like the humidity isn’t going to rise by any considerable amount. 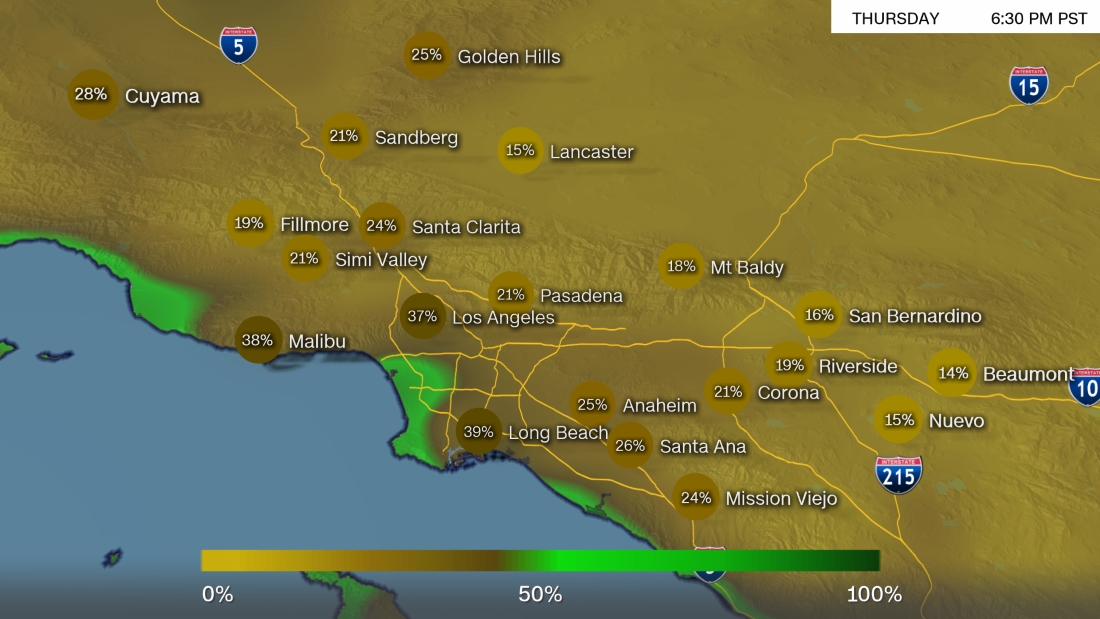 Winds are also a dangerous factor

Winds have been strong in the area this week, with peak gusts of 85 mph reported in Ventura on Wednesday night. Winds also encourage the spread of wildfires, but luckily they should slowly die down over the weekend. This image from NASA shows the smoke billowing around the area, which can also tell us a little about what direction the winds are blowing and how strong they are. 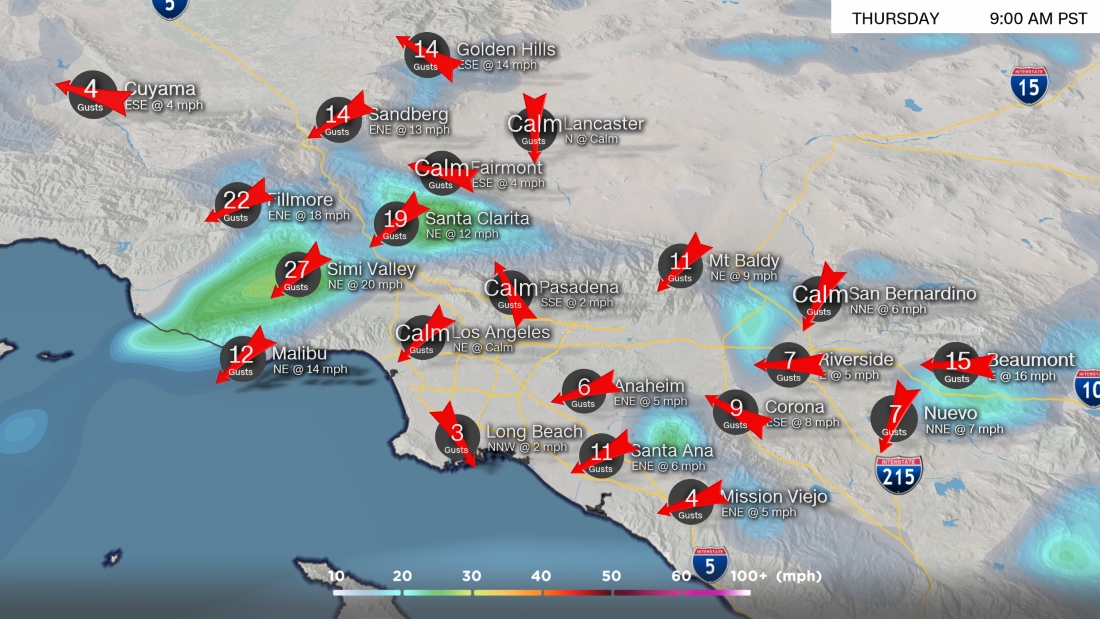 The area’s geography is fueling the spread

The heavy winds aren’t just a fluke -- there’s actually a regular weather phenomenon in this area of California called a Santa Ana wind event. The Santa Ana winds happen because high pressure builds over the western US, forcing air over the California deserts. As the air pushes over, down and through the coastal mountains, it dries, warms up, and picks up speed. That’s why the area can see such strong winds.

However, the LA region is currently experiencing one of the worst Santa Ana wind events it’s had in a decade -- which, obviously, pairs very poorly with the nearby wildfires.

The scenes on the ground are harrowing

About 5,000 firefighters have been dispatched to fight the four blazes, with half of them attending to the massive Thomas fire alone. In the burned areas, there are innumerable scenes of destruction and grief. In nearby areas that have so far escaped the blaze, there are surreal images of life, apparently going on as usual, as walls of orange flames burn ominously in the distance. 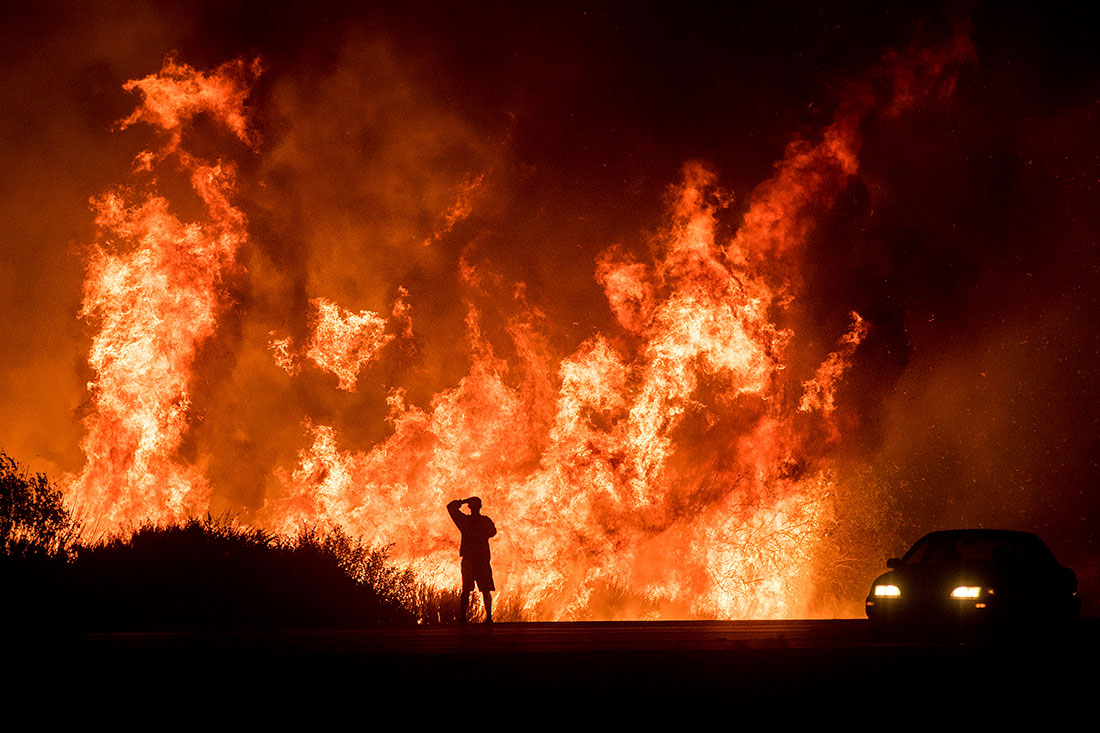 It can even be seen from space

Smoke emanating from the collective inferno has drifted 1,000 miles over the Pacific Ocean. Even in areas that aren’t burning, the thick plumes can be dangerous. Health officials have warned people in the San Fernando Valley and other parts of northern LA to limit their time outdoors.

The smokey haze can even be seen from the International Space Station. “I was asked this evening if we can see the SoCal fires from space,” tweeted Astronaut Randy Bresnick. “... unfortunately, we can. May the Santa Ana’s die down soon.” 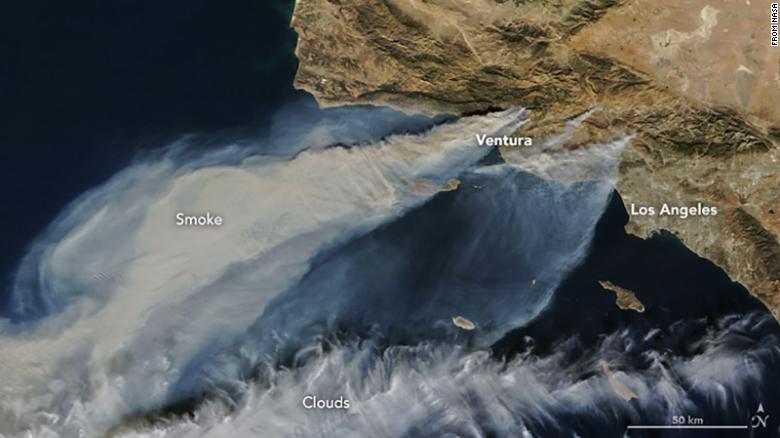 LA is famous for its foul traffic, and it’s no wonder that the nearby fires are adding to the gridlock. Between people getting out of town and intermittent road closures, maps of LA’s traffic situation have been splashed with red around the clock. On Wednesday, a 9-mile stretch of Interstate 405 was shut down as the Skirball Fire approached the freeway. Alarmed motorists posted pictures of cars at a standstill, with massive swaths of flames just yards away.