How this 1976 dinner changed the way you eat 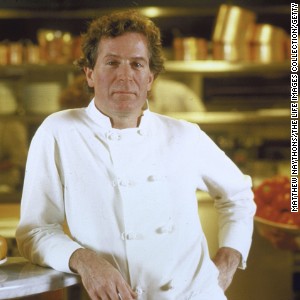 Jeremiah Tower pictured in his San Francisco restaurant Stars, which he opened after his game-changing stint at Chez Panisse.

In the early 1970s, Alice Waters -- the fairy godmother of garden-grown, sustainably delicious fine dining -- did two things that would help change America’s relationship with food.

Then, she hired Jeremiah Tower -- an untrained gastronomic prodigy who would go on to redefine the American restaurant and revolutionize American cuisine.

In the fall of 1976, this creative (and legendarily combustible) relationship delivered a dinner so game-changing we’re still dining off its impact today.

Crafted by Tower, it was called the “Northern California Regional Dinner,” and celebrated all things local, fresh and seasonal.

“When you went to the fancy French restaurants in the ‘70s, you were still getting Dover sole from Dover,” says chef Mario Batali in the CNN Film “Jeremiah Tower: The Last Magnificent.” At Chez Panisse, “the first thing they did is celebrate local ingredients.”

The result, adds “Last Magnificent” executive producer and “Parts Unknown” host Anthony Bourdain, was to announce to the world that “our stuff is good too. It deserves to be named and attributed and sourced in much the same way that they source and identify French cheeses or wines or other products. (Jeremiah Tower) wrote menus that sold that notion -- that confidently said, ‘American product, f* yeah.’”

And if there’s ever a menu that screams “American product, f* yeah,” it’s Tower’s 1976 creation. Below, satisfy your appetite for food history with an annotated guide to the meal that “lit the match” on America’s modern food revolution. 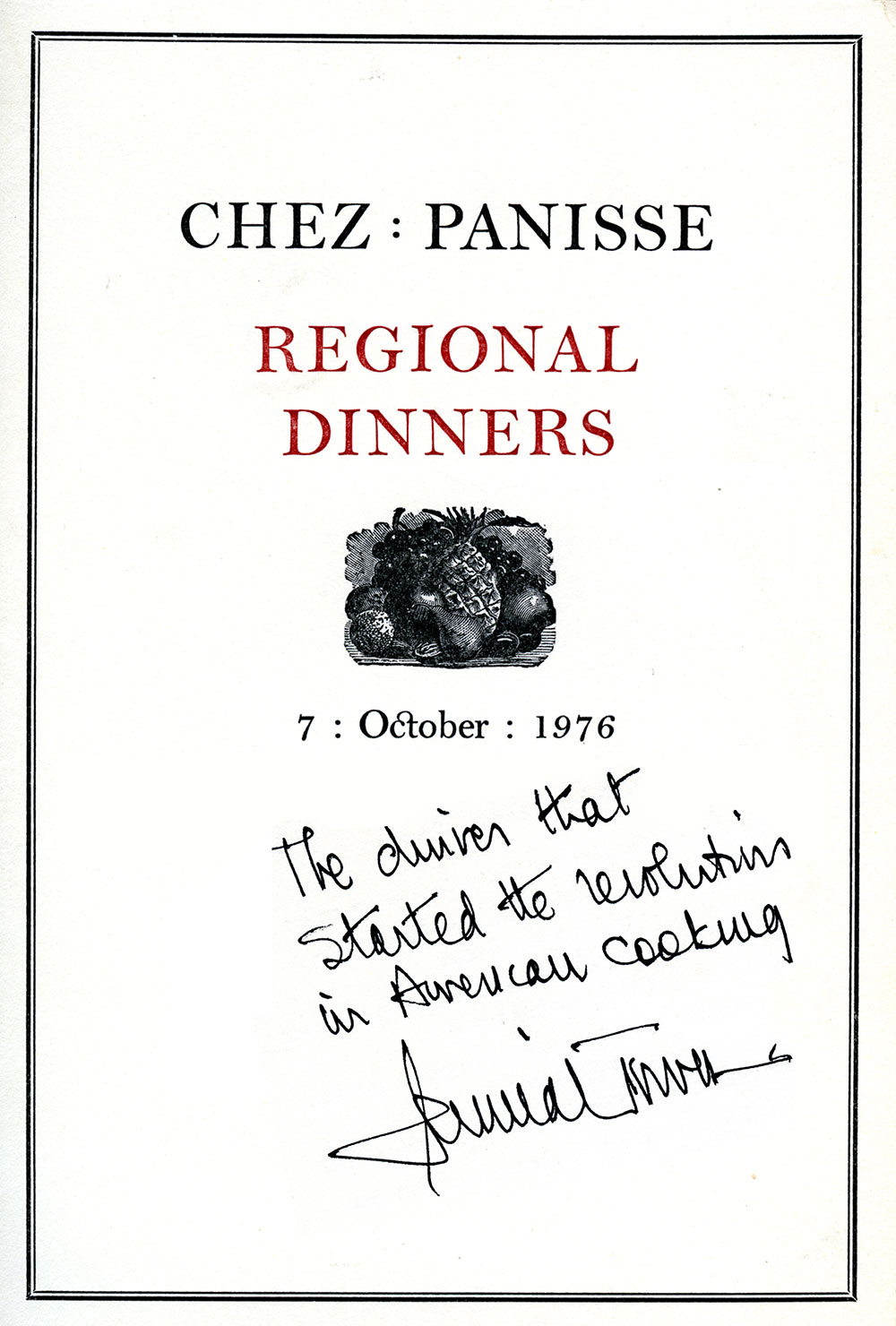 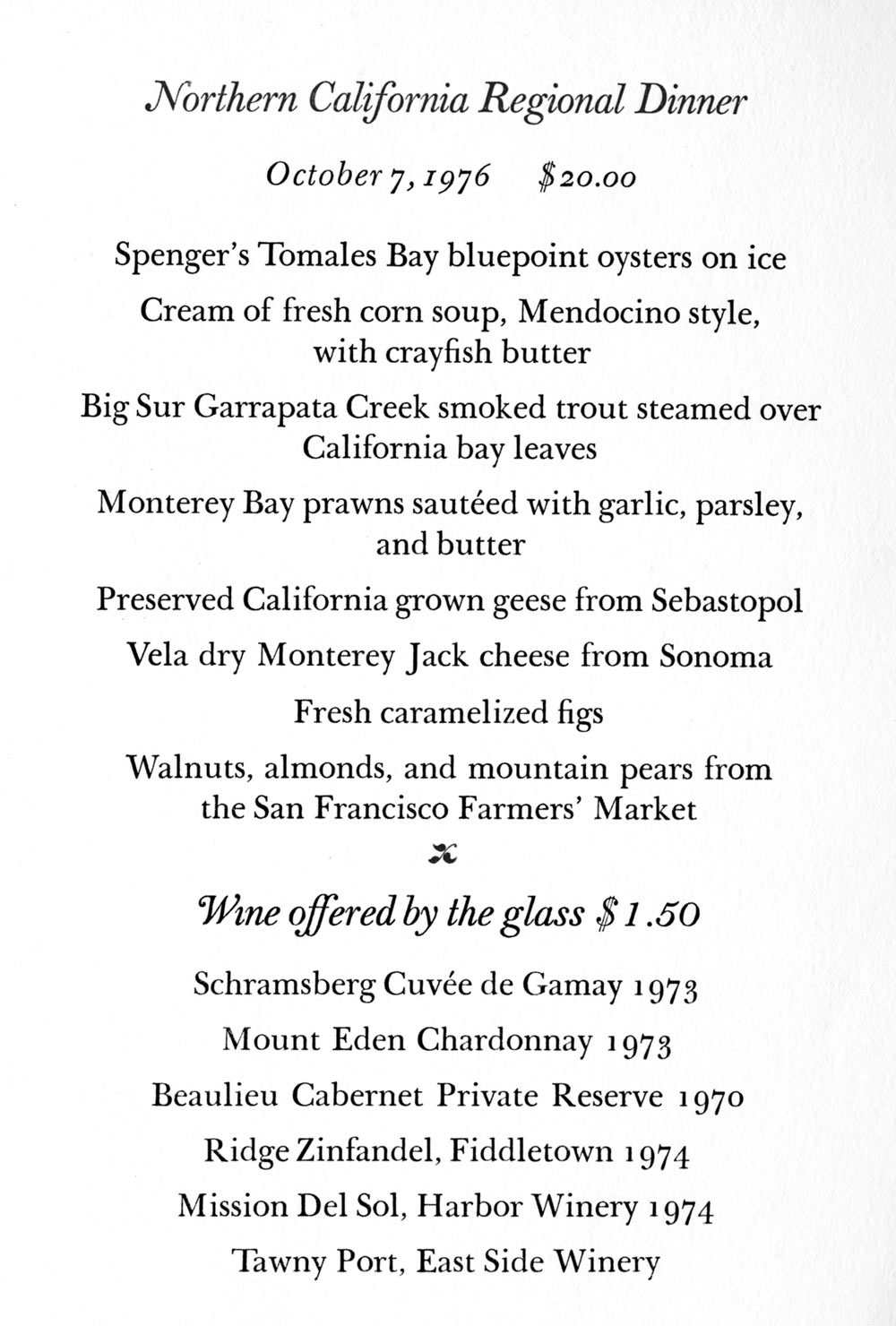 Click or tap a menu item to learn more

Jeremiah Tower was inspired to celebrate the food naturally around him while flipping through a cookbook by French chef Charles Ranhofer; at the time, Chez Panisse was known for French classics and French regional food. But when Tower spied a soup that referred to the Northern California county of Mendocino, “like a bolt out of the heavens, it came to me,” Tower said in his cookbook “New American Classics.”

“Why am I scratching around in Corsica when I have it bountifully all around me here in California? … And I began to compose an American regional dinner -- California, not Corsica.”

This is a version of the soup that sparked Tower’s California-focused menu, and Tower made a point of naming the local source of each ingredient that appears on it -- Mendocino; Big Sur; Tomales Bay in Marin County. “That was above all the most important thing, to say, ‘Listen, our scallops are better than the scallops in France. Our oysters are at least as interesting as the oysters from wherever in France,’” chef Mario Batali says in CNN’s film on Tower. “That’s when suddenly everyone realized, we don’t have to apologize that our artichokes come from Castroville. We don’t have to apologize that we’re using Dungeness crab. We actually should be celebrating them and high-fiving everybody, and that movement was exactly that. And it, to a certain extent, is still moving around the country right now.”

Tower first came into contact with Garrapata Creek trout as a child, during a 1950 family road trip across the US. “The … excursion was to the Garrapata Trout Farm, located in one of those magical canyons off Big Sur. Catching fish in the pond was guaranteed, and we soon had enough to grill on open fires under overhanging California bay trees. … the smells and aromas invaded and captured my brain. When I started working at Berkeley’s Chez Panisse, live Garrapata trout were among the first resources to which I turned.”

While prior menus for Chez Panisse had been written in French, for this meal -- and for the first time -- Tower switched to English. Instead of the French “confit” here, the California grown geese are “preserved.” “My menu, in English, was a celebration of our new sense of place, of where we lived and ate,” Tower says in his memoir.

If elements of the menu sound familiar, the Wine Spectator wrote in 2001, “It’s because a culinary movement that began in California in the 1970s so succeeded that its principles completely dominate the way we eat today.” Notably, all of the wine that accompanied the meal was also from California -- the first time the restaurant had focused solely on local vino.

“In his ‘The Last Days of Haute Cuisine: America’s Food Revolution,’ Patric Kuh predicted that this night at Panisse ‘would be one of the great switching points in American gastronomy,’” Tower says in his memoir. But, he adds, “I didn’t have such high-flying sentiments then. I was trying to finish the year and then go do great things in the next and final year of my stint and ownership at Chez Panisse. To go out with a bang and no whimper.” So what, if anything, would Tower do differently today? There is one change, he told CNN: “I’d make a shorter menu.”