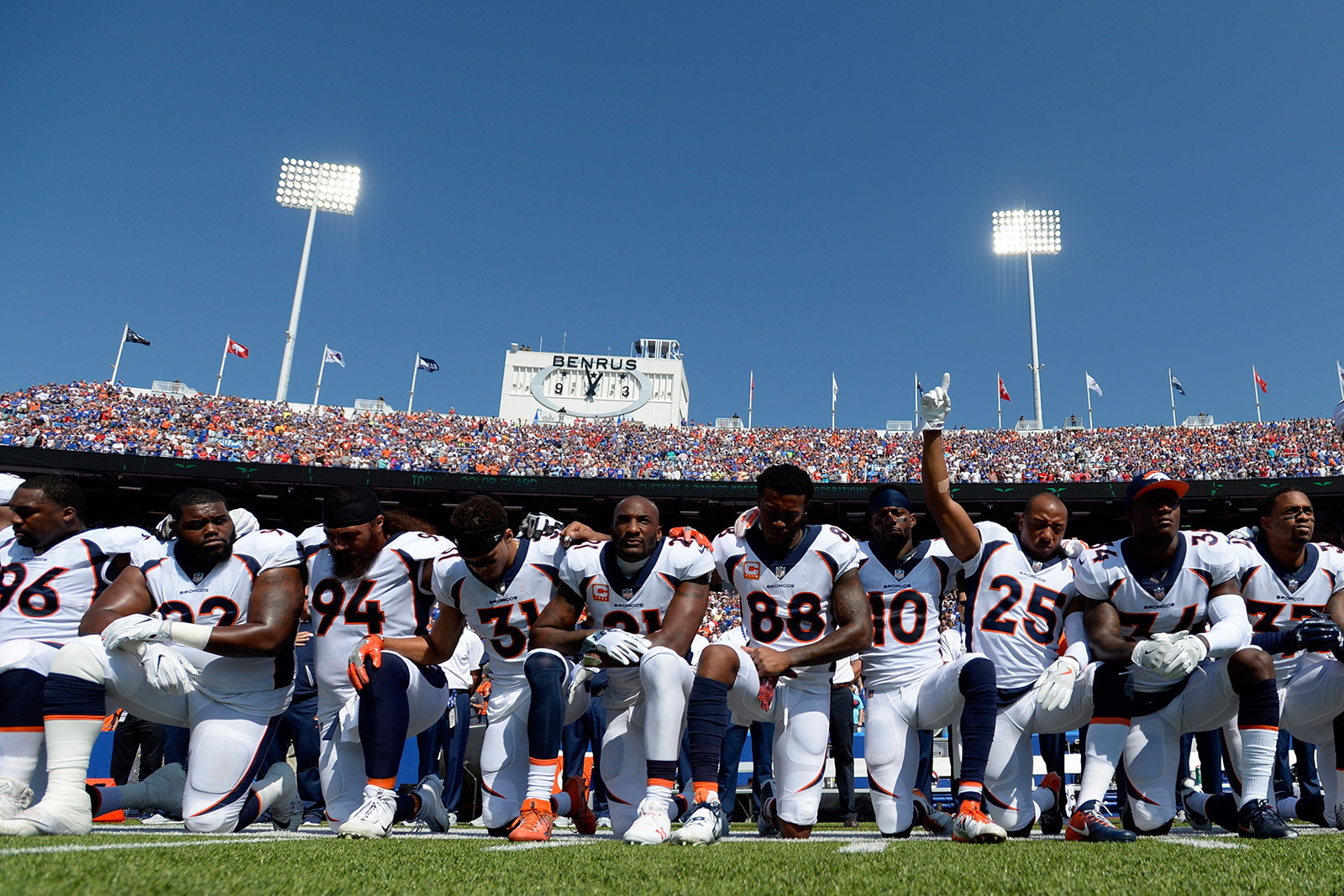 Not just a knee

All eyes were on NFL sidelines Sunday, a couple of days after President Donald Trump strongly criticized players who have been protesting during the national anthem.

Many players and coaches from across the league — and some team owners, too — came together during pregame ceremonies, locking arms or putting their hands on each other’s shoulders. Some players kneeled, continuing the silent protest started last season by Colin Kaepernick, or raised a fist. Some sat on the bench.

“What you just saw was a variety of responses with the theme of unity,” an NFL front office source told CNN. “All across the league, owners, coaches and players came together to decide what was best for them.” 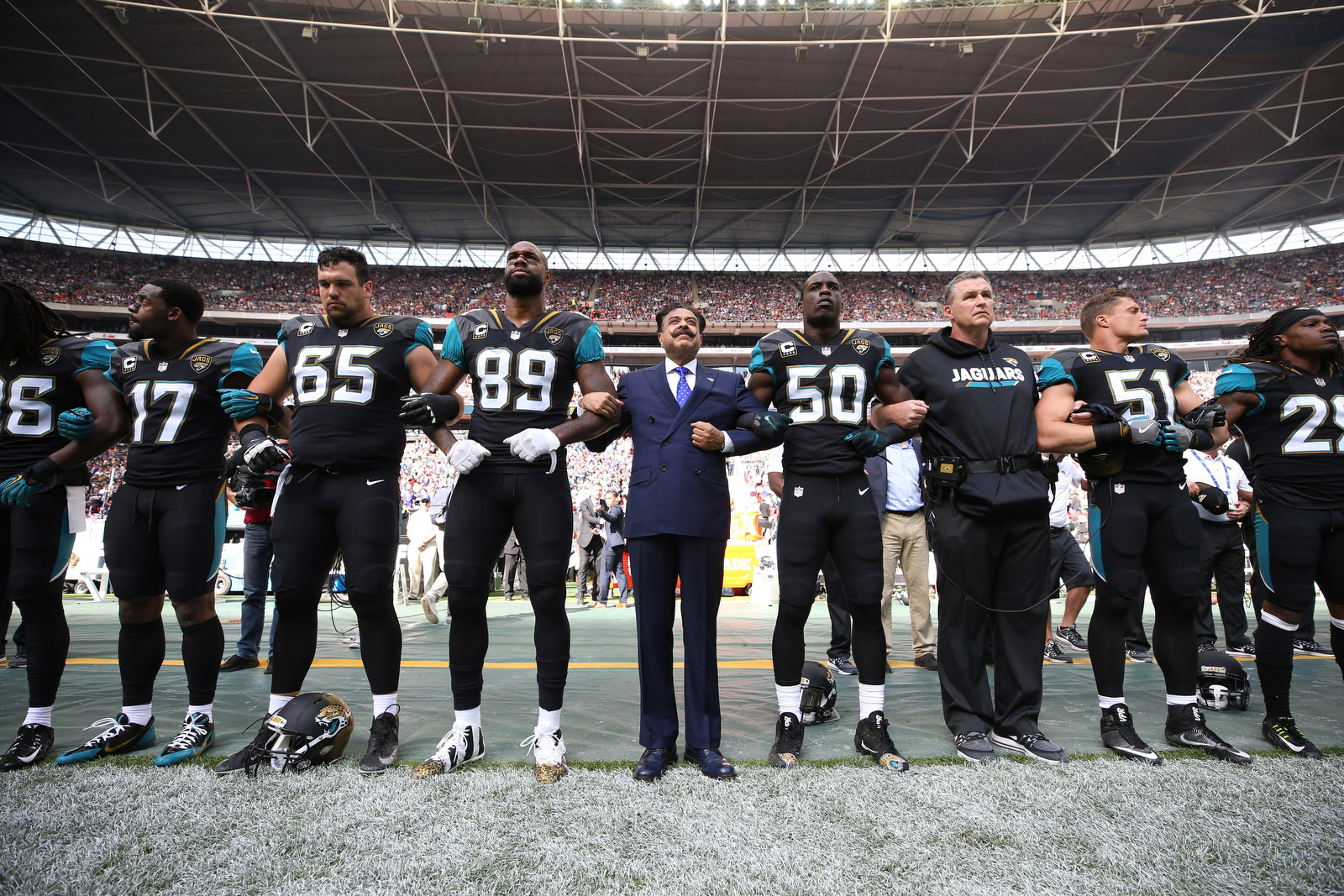 Sunday’s first game started in London, with the Jacksonville Jaguars and the Baltimore Ravens playing at Wembley Stadium. Jaguars owner Shad Khan, center, locked arms with players during the anthem. At least a dozen Jaguars took a knee. Logan Bowles/AP 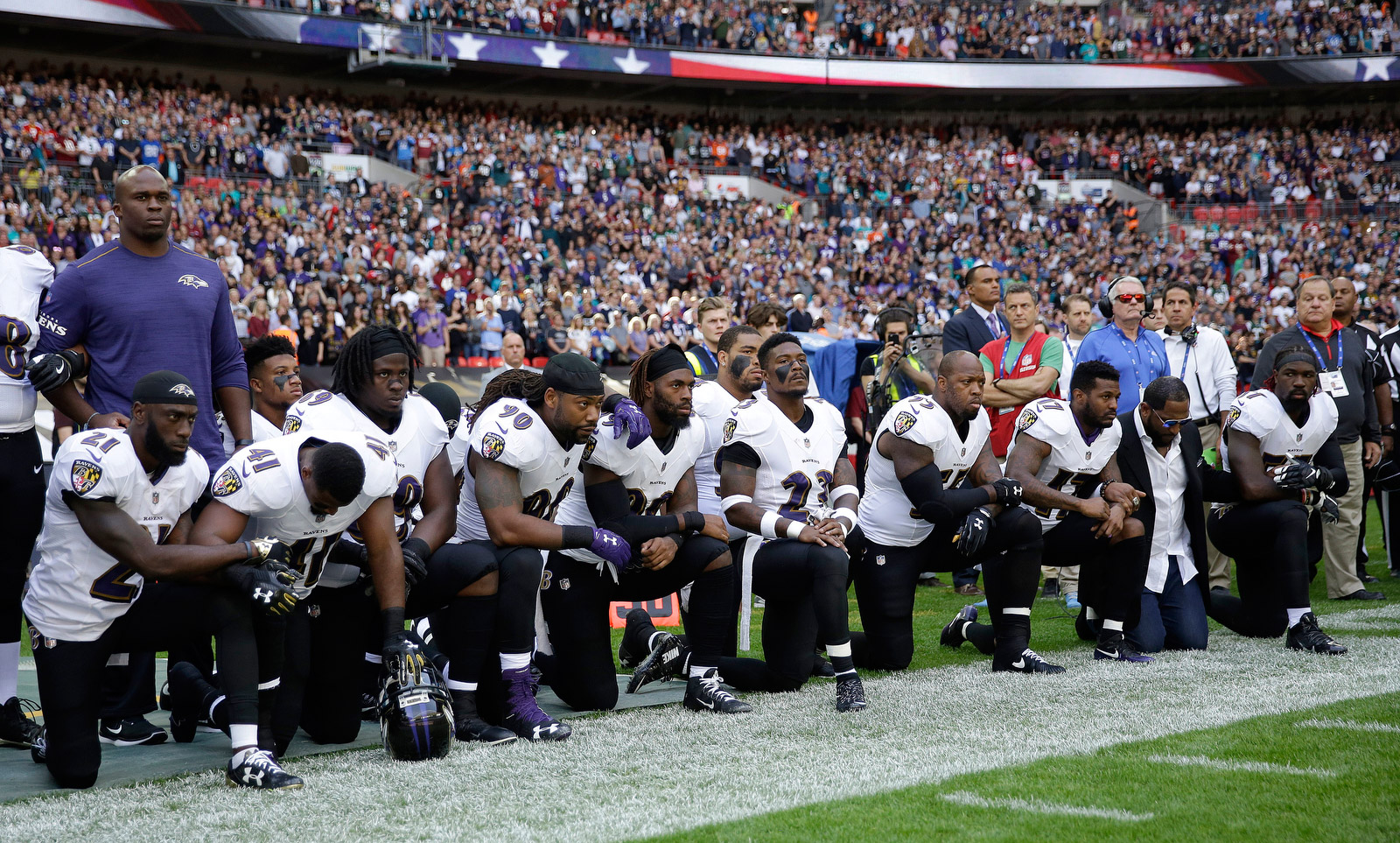 Players kneel on the Ravens sideline before the game in London. Joining the players was retired linebacker Ray Lewis, second from right. Matt Dunham/AP 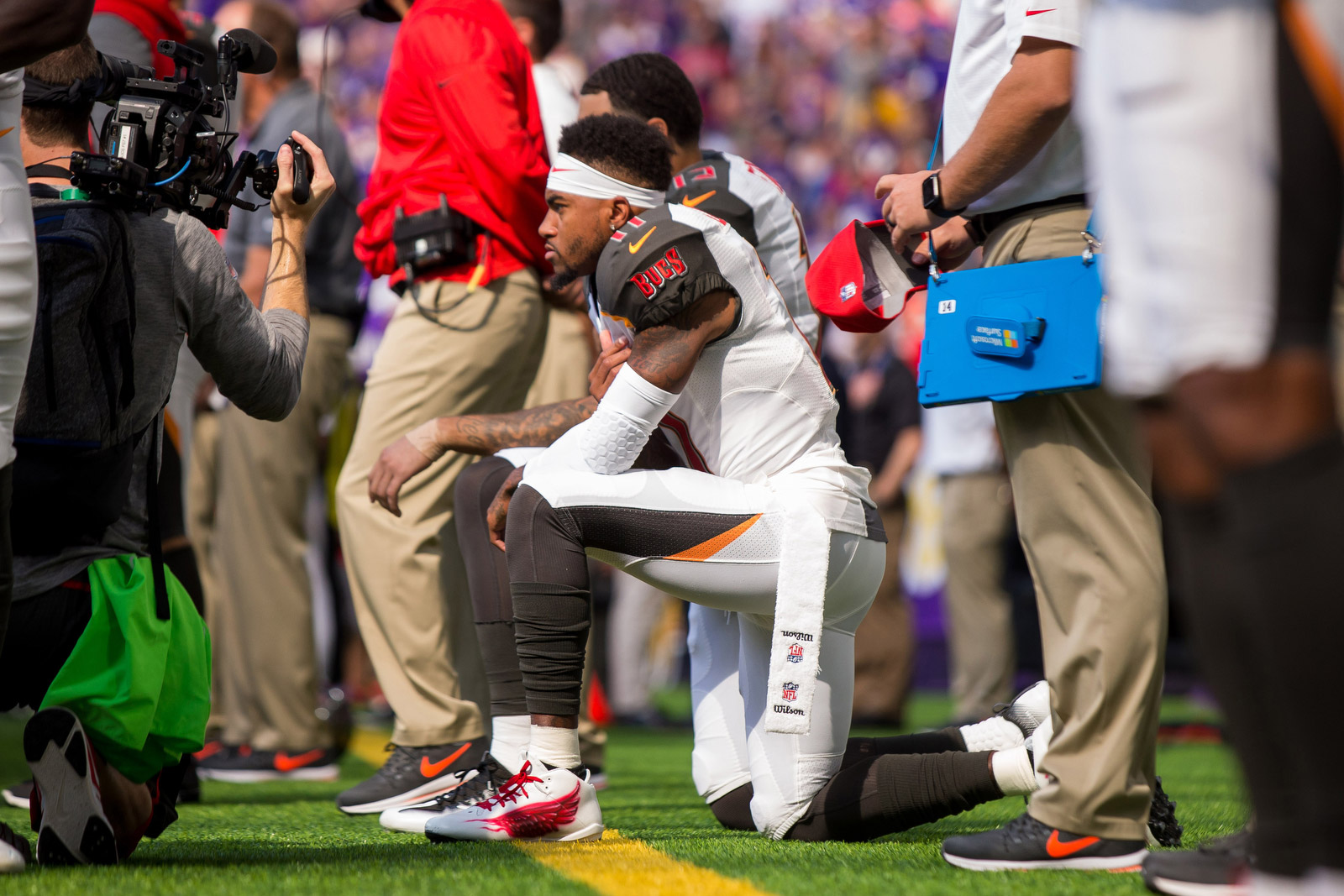 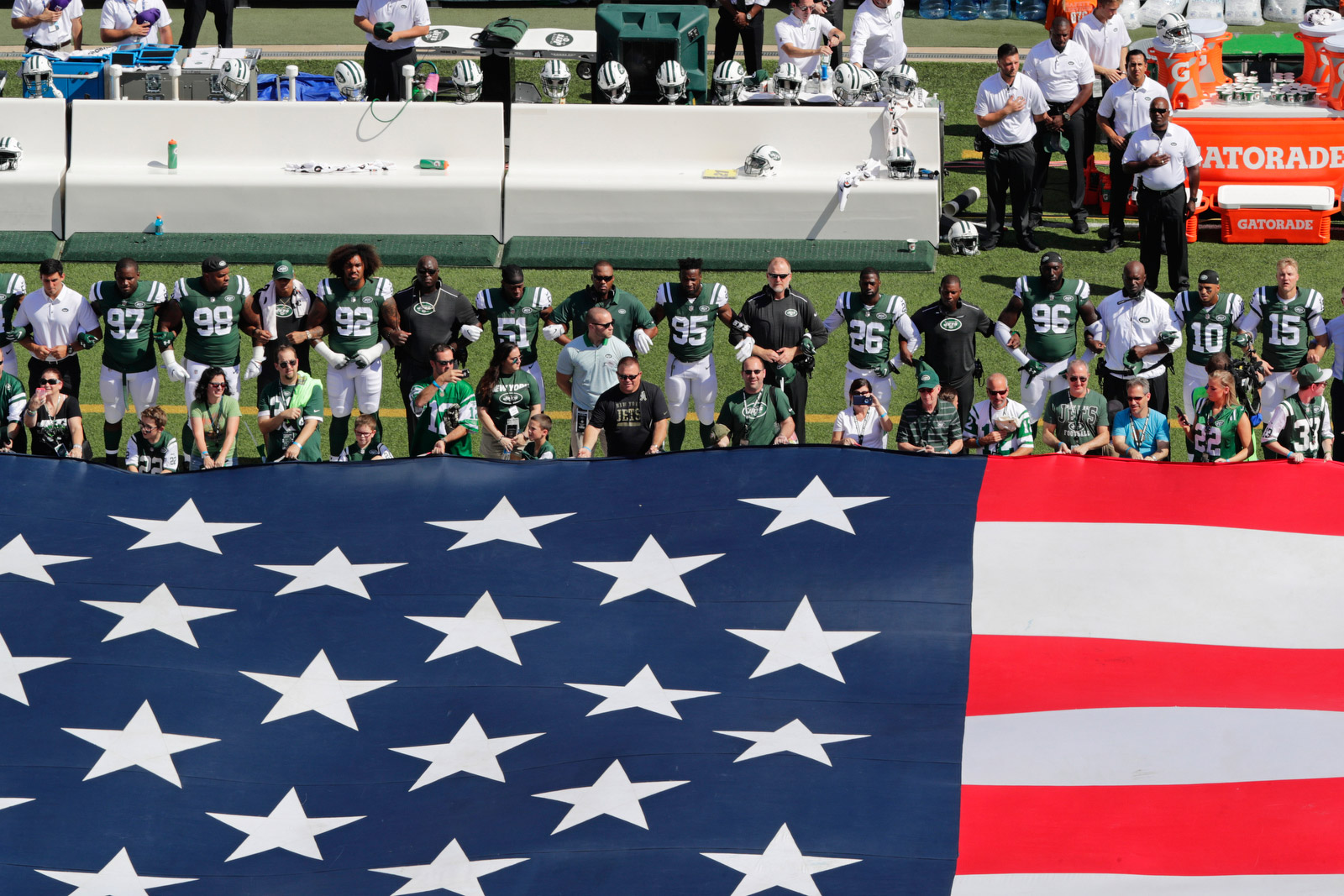 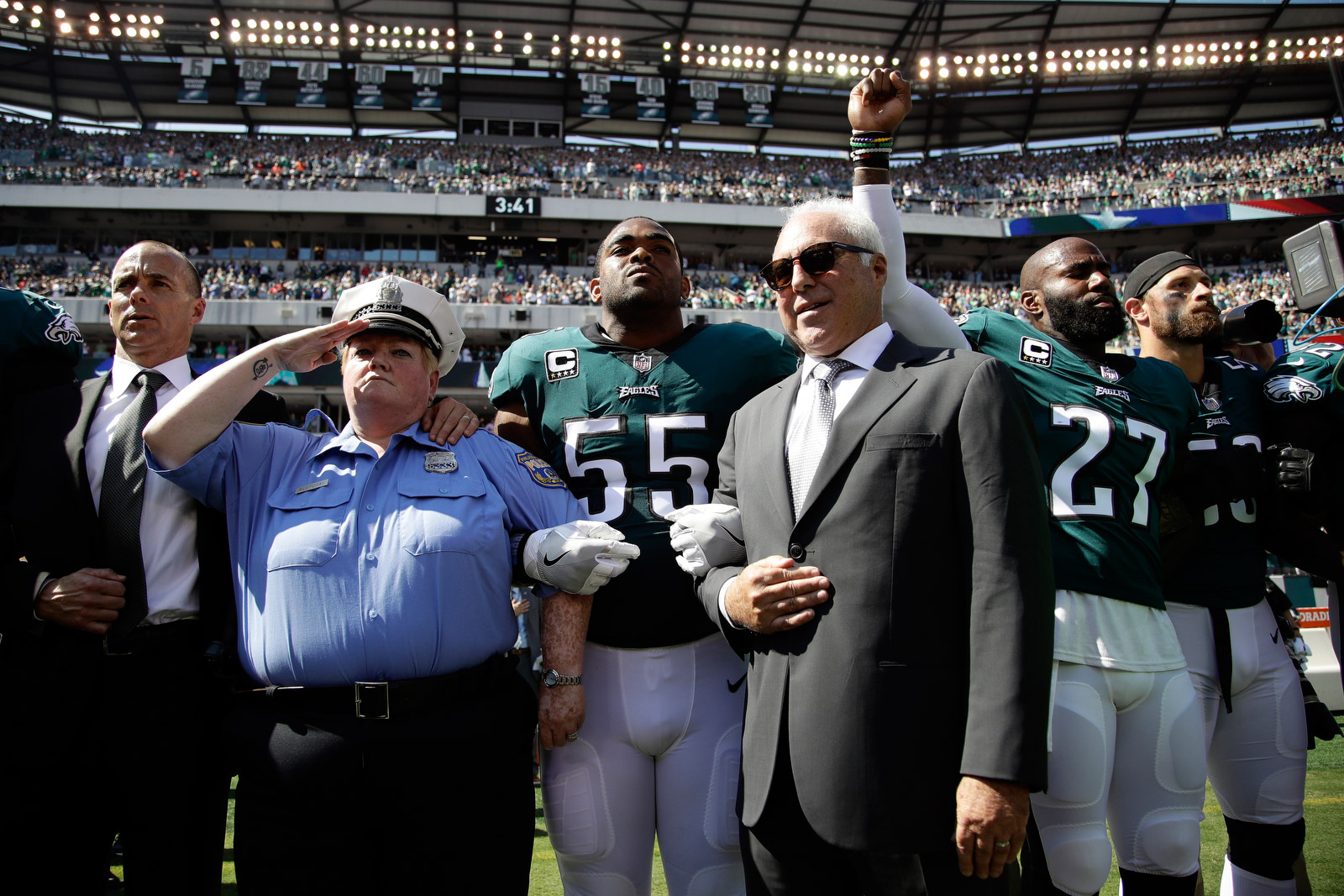 Philadelphia Eagles owner Jeffrey Lurie joins his players for the anthem. Raising a fist next to him is safety Malcolm Jenkins, a team captain. Matt Rourke/AP 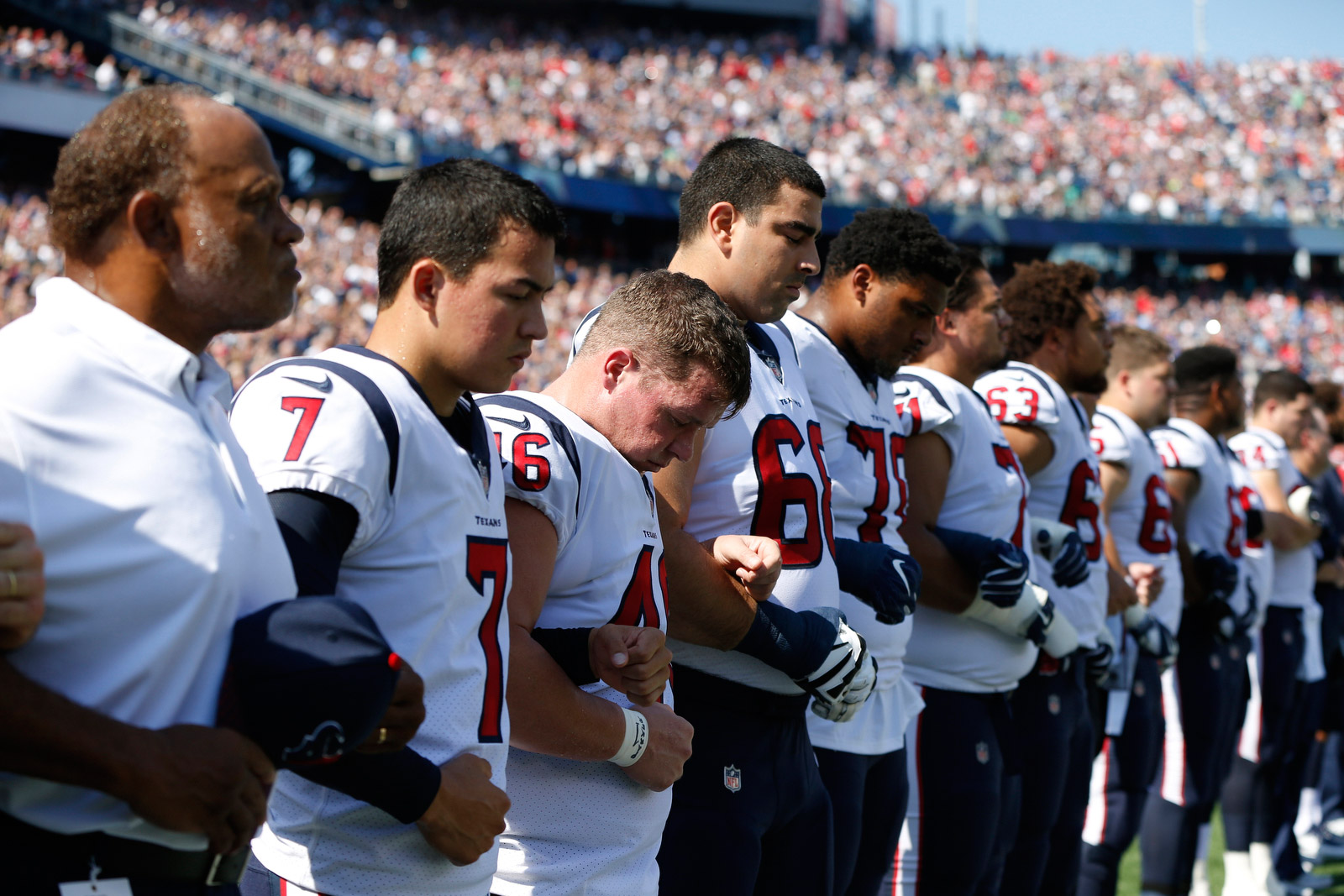 The Houston Texans line up together during the anthem in New England. Greg M. Cooper/USA TODAY Sports 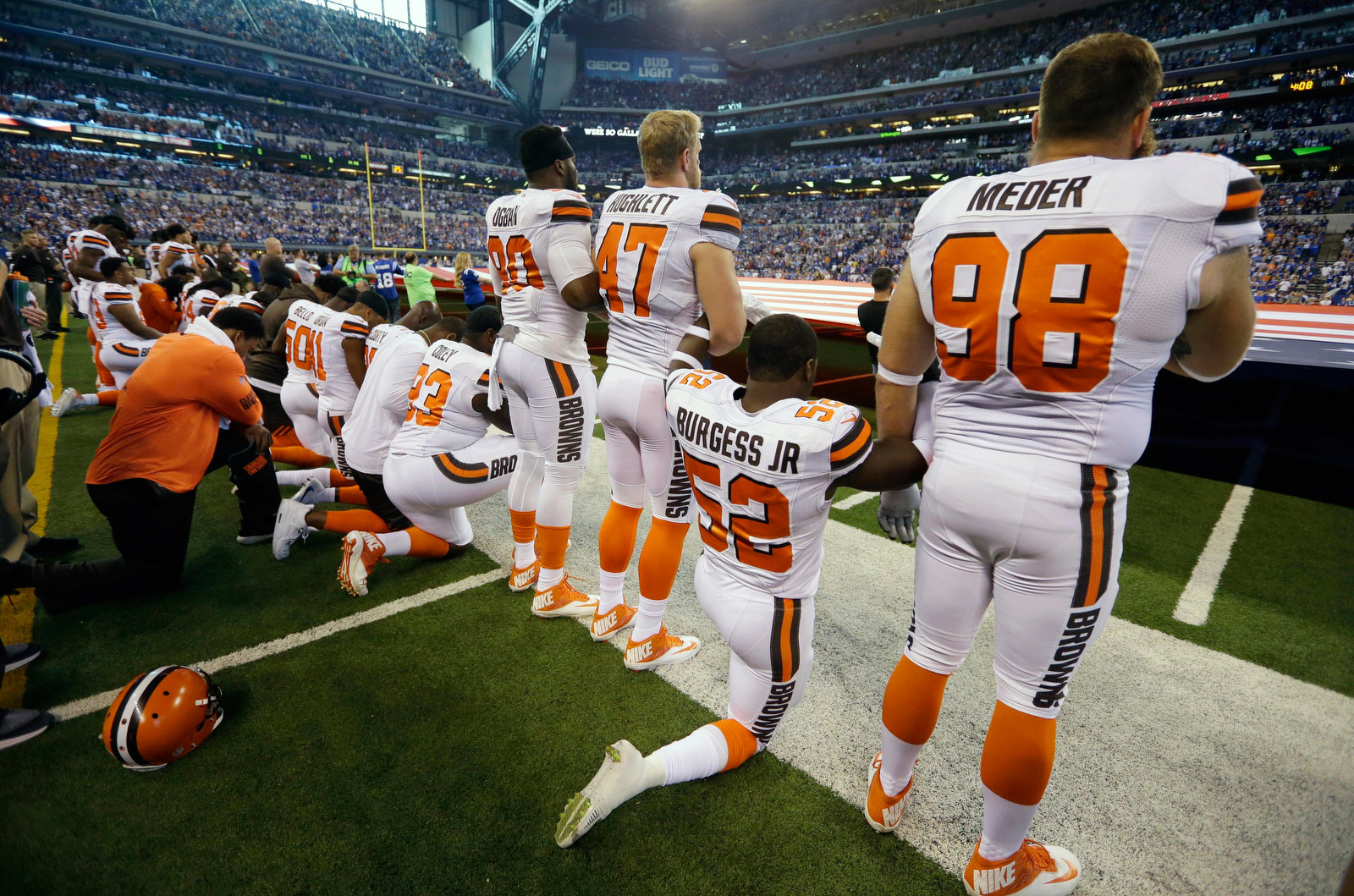 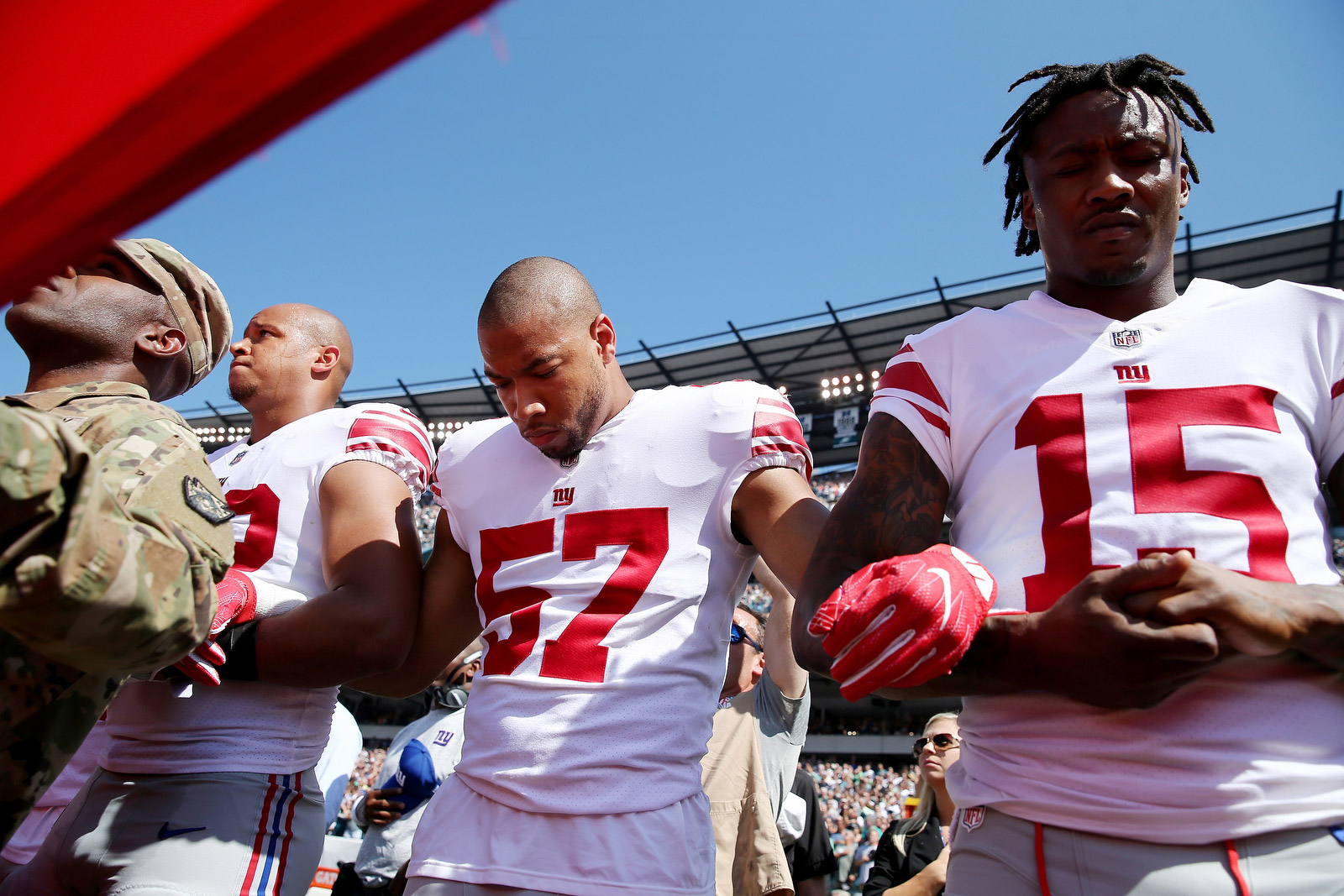 Keenan Robinson (No. 57) locks arms with New York Giants teammate Brandon Marshall (No. 15) before their game in Philadelphia. Elsa/Getty Images 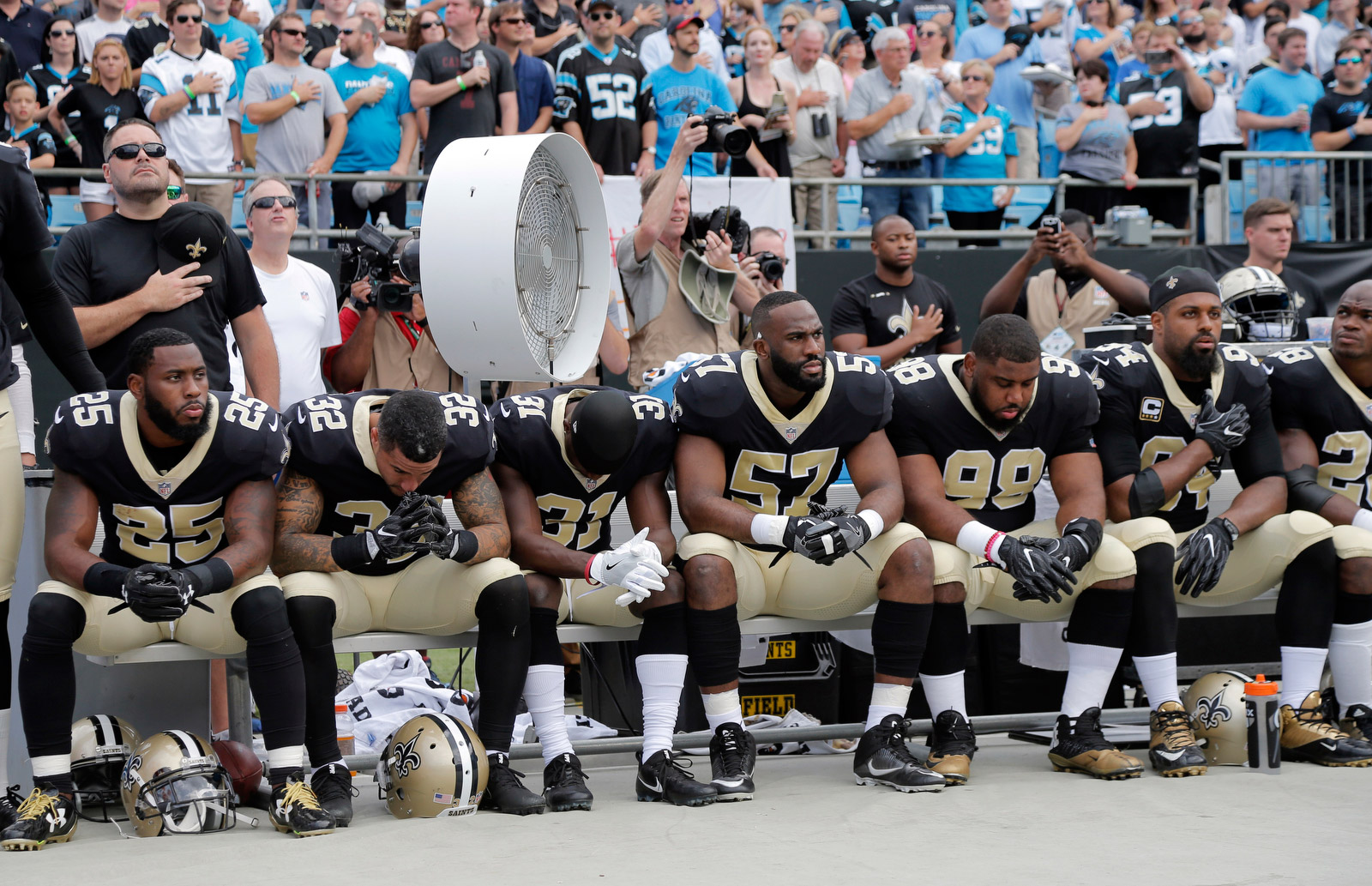 Members of the New Orleans Saints sit on the bench during the anthem in Charlotte, North Carolina. Bob Leverone/AP 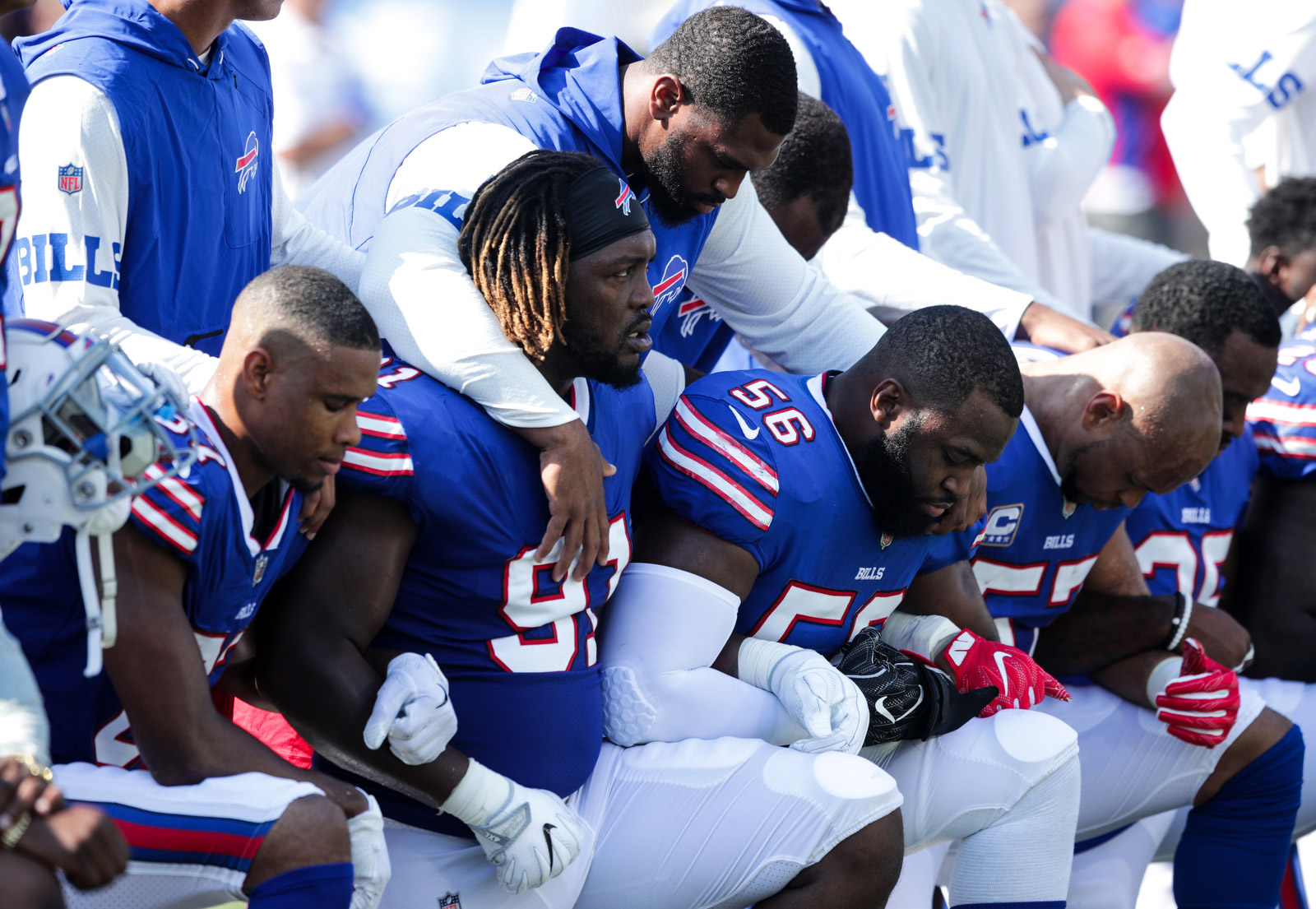 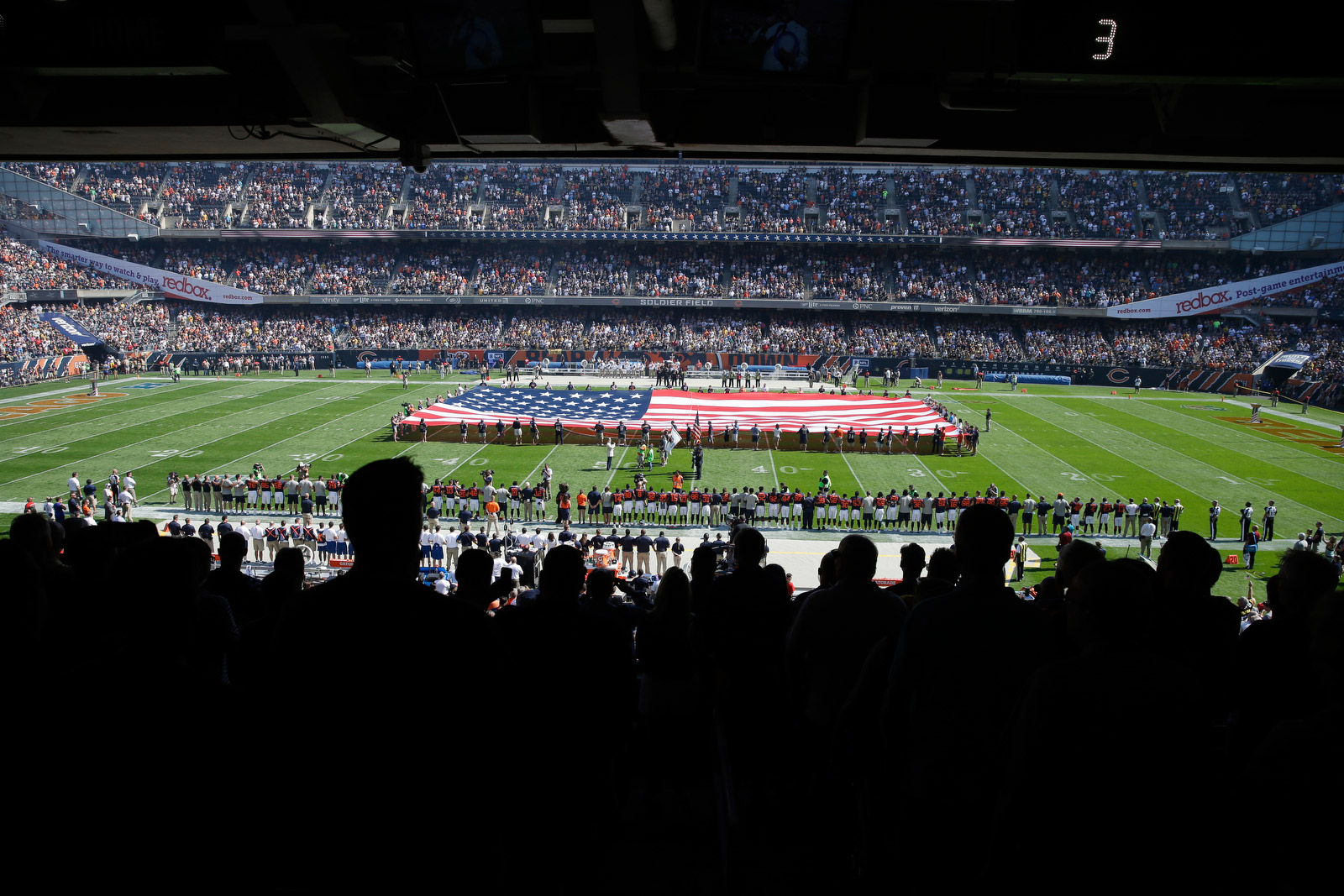 The Chicago Bears are seen on the near sideline before a home game at Soldier Field. Their opponents, the Pittsburgh Steelers, did not come out to the field for the anthem. Kiichiro Sato/AP 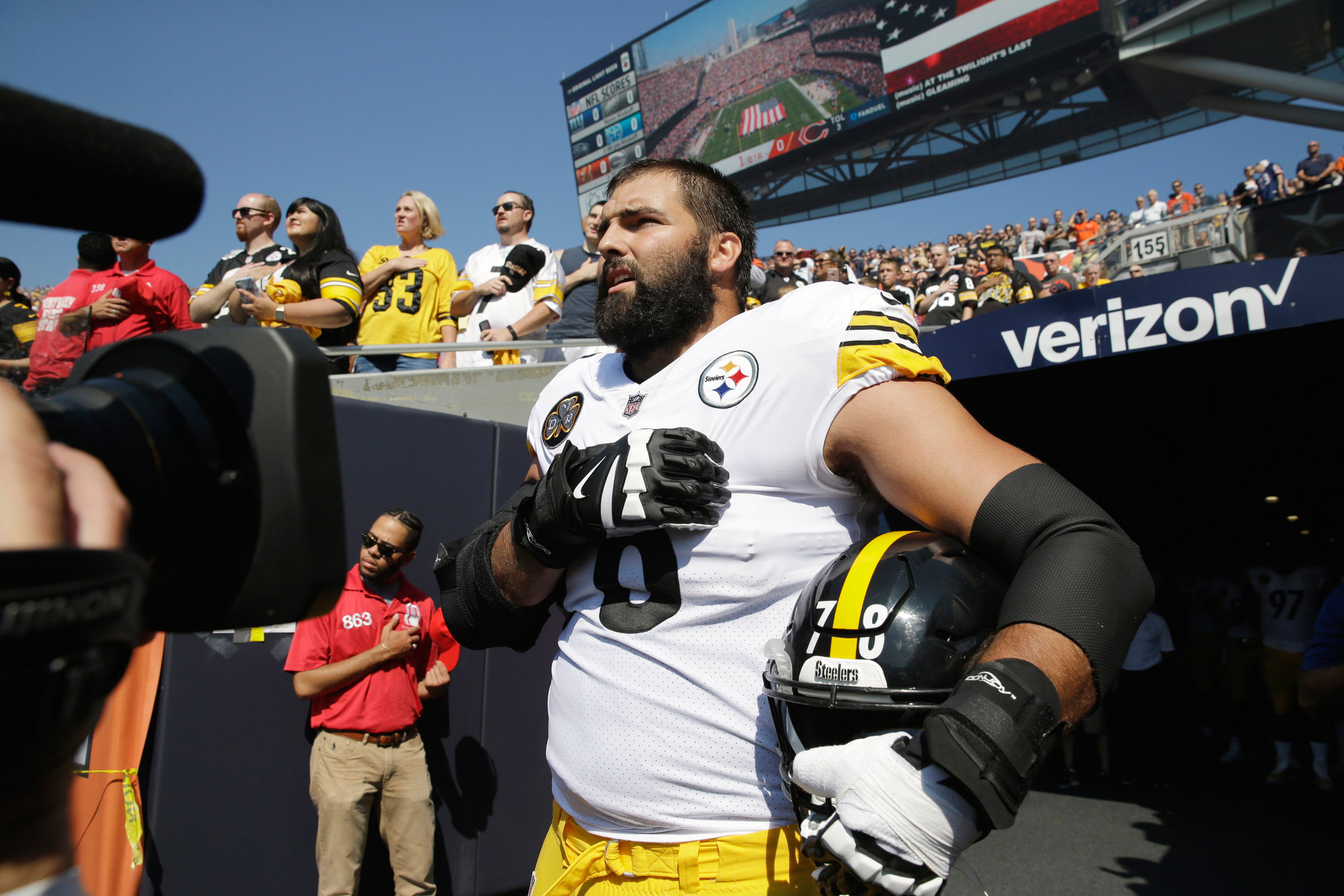 One Steeler, offensive lineman Alejandro Villanueva, chose to listen to the anthem from the tunnel while his teammates were in the locker room. Villanueva is a former Army Ranger. Nam Y. Huh/AP 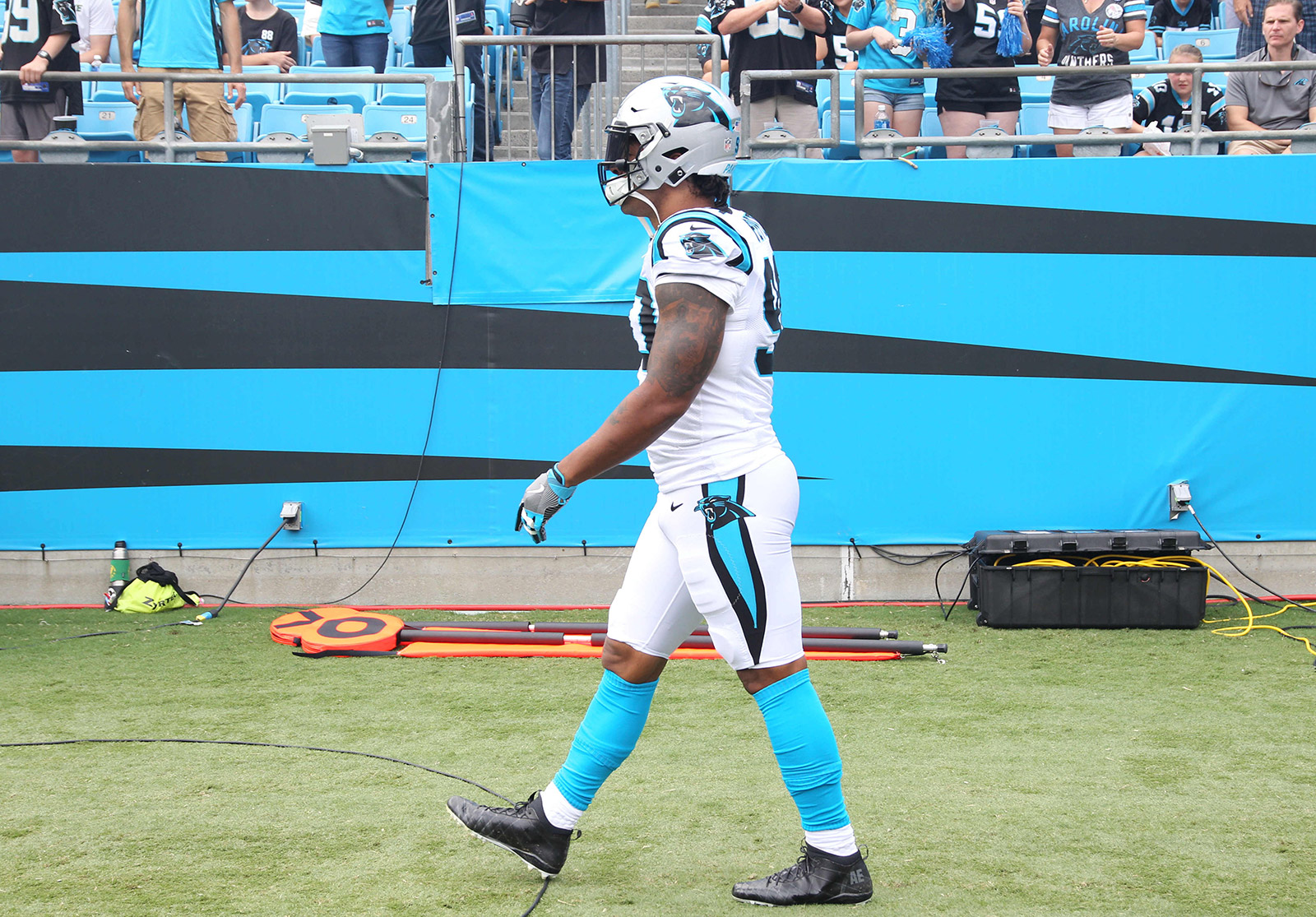 Carolina Panthers defensive end Julius Peppers stayed in the locker room during the national anthem in Charlotte. Here, he walks onto the field after the anthem. Jeremy Brevard/USA TODAY Sports 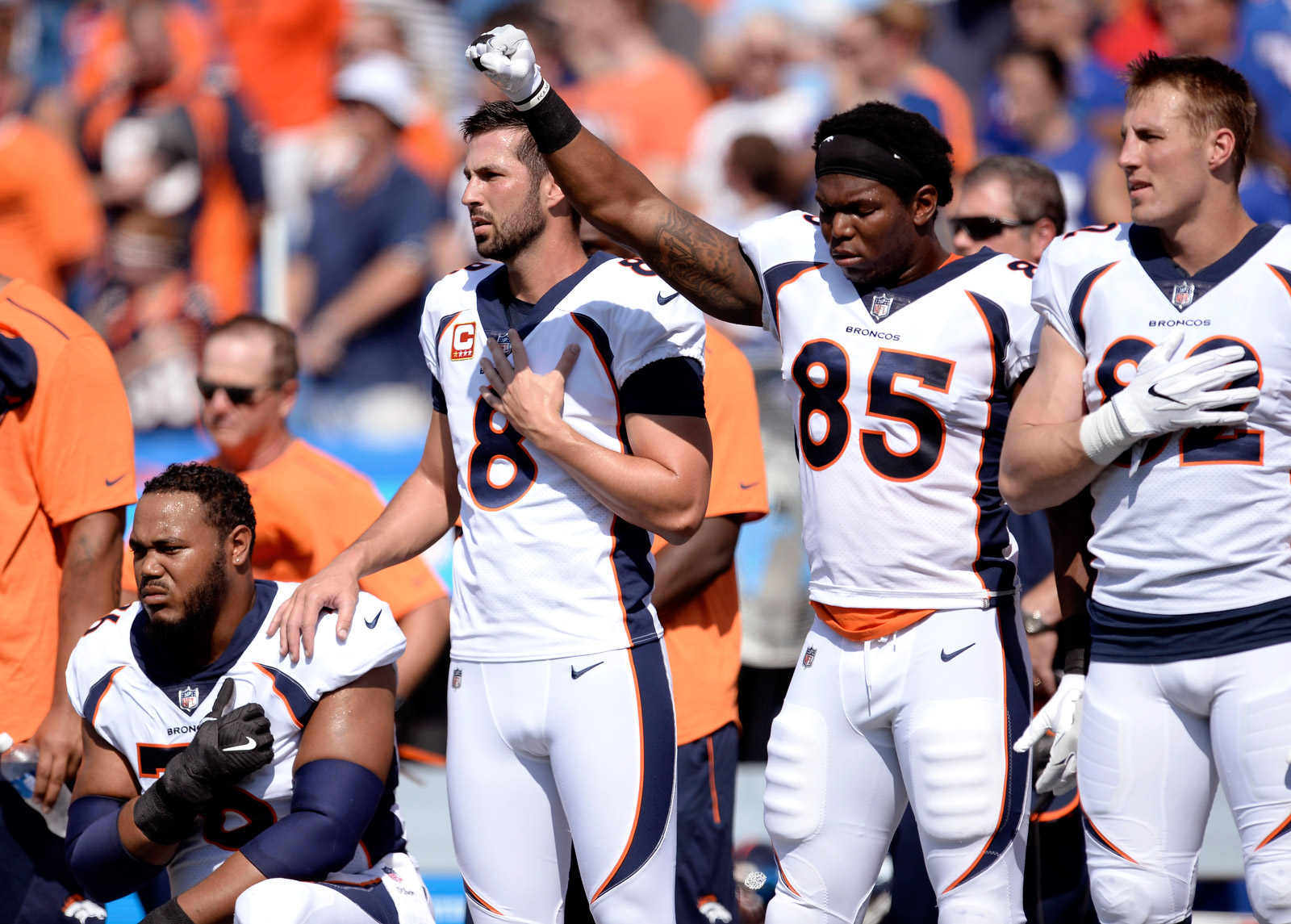 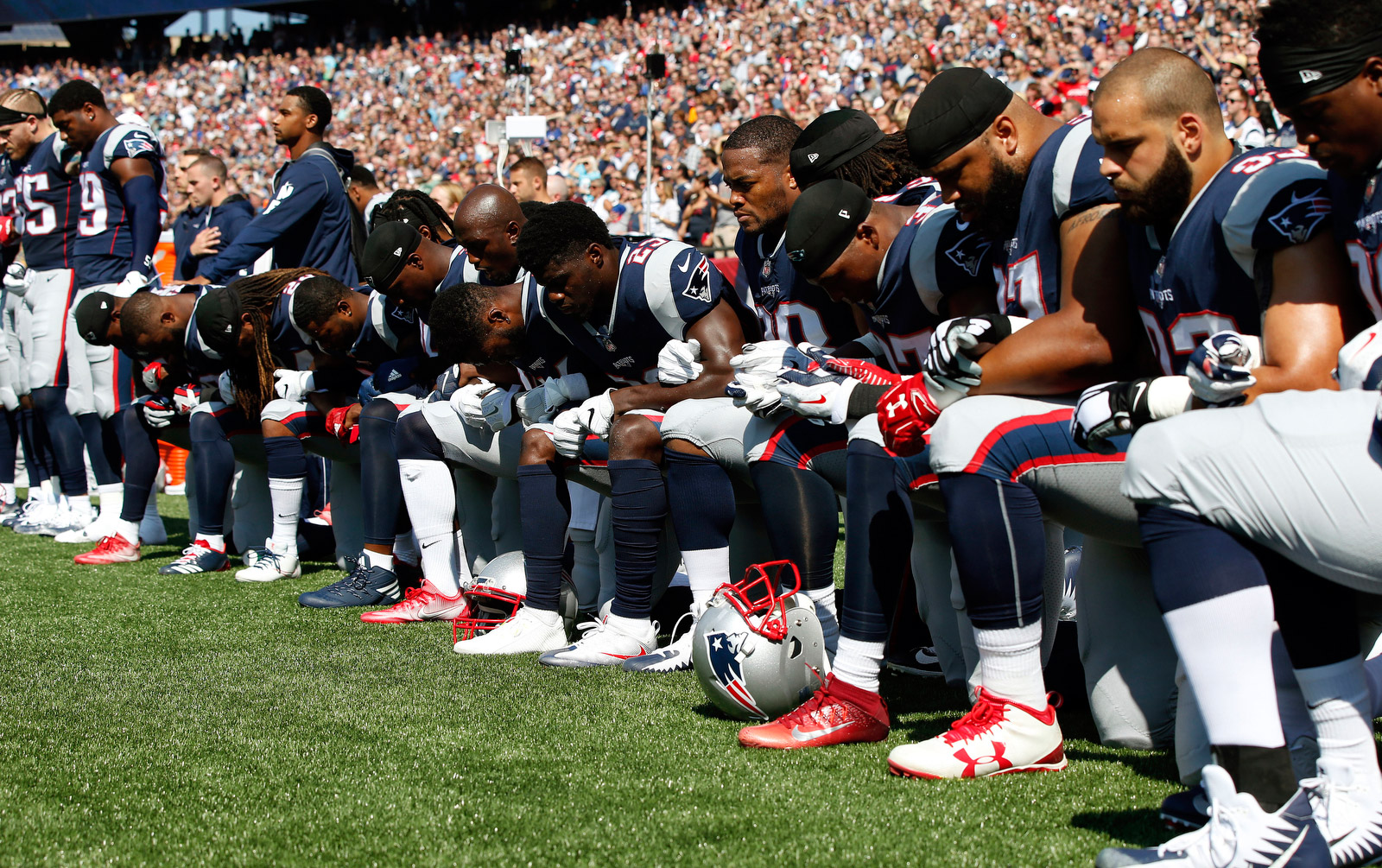 Some of the New England Patriots kneel together before taking on Houston. Michael Dwyer/AP 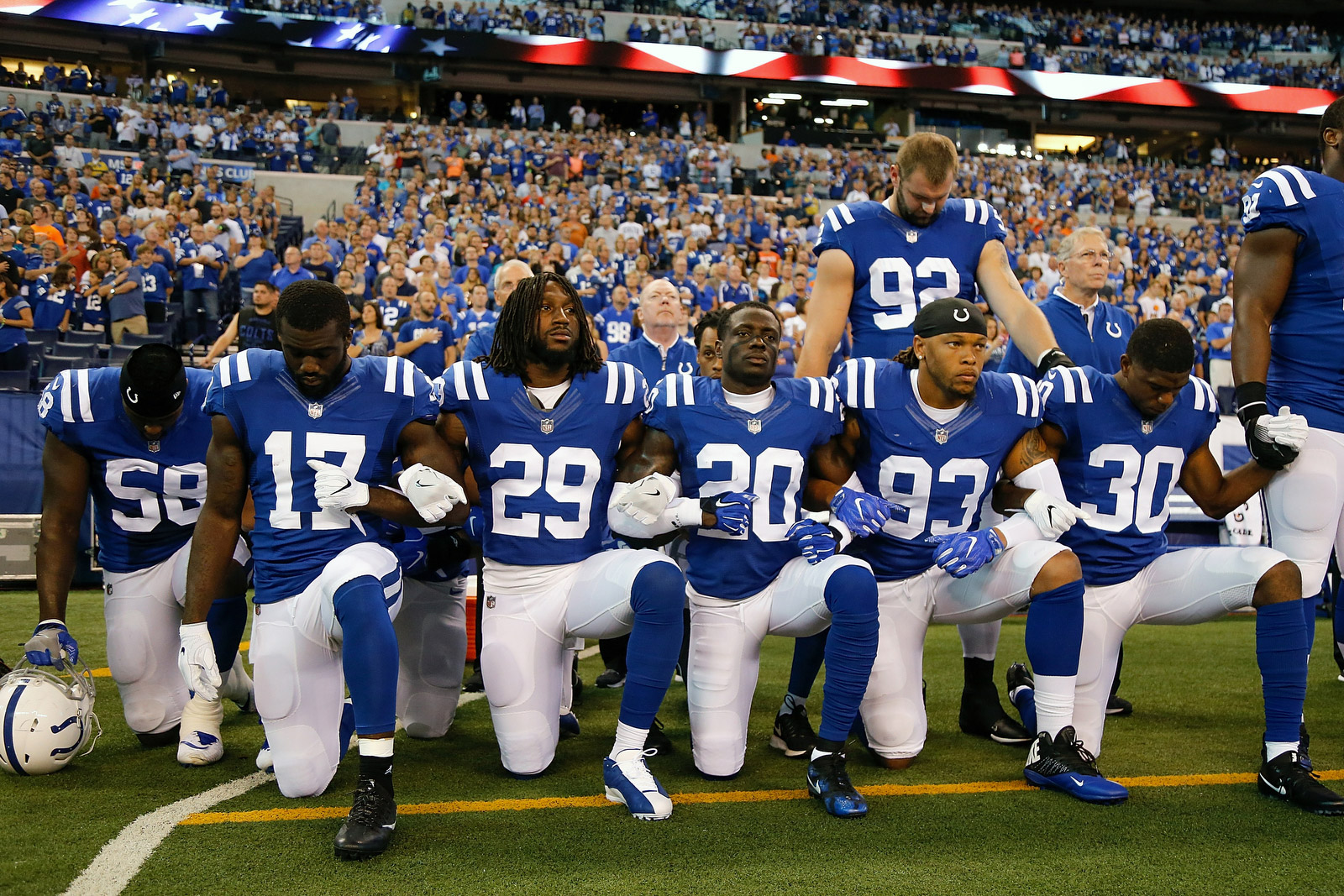 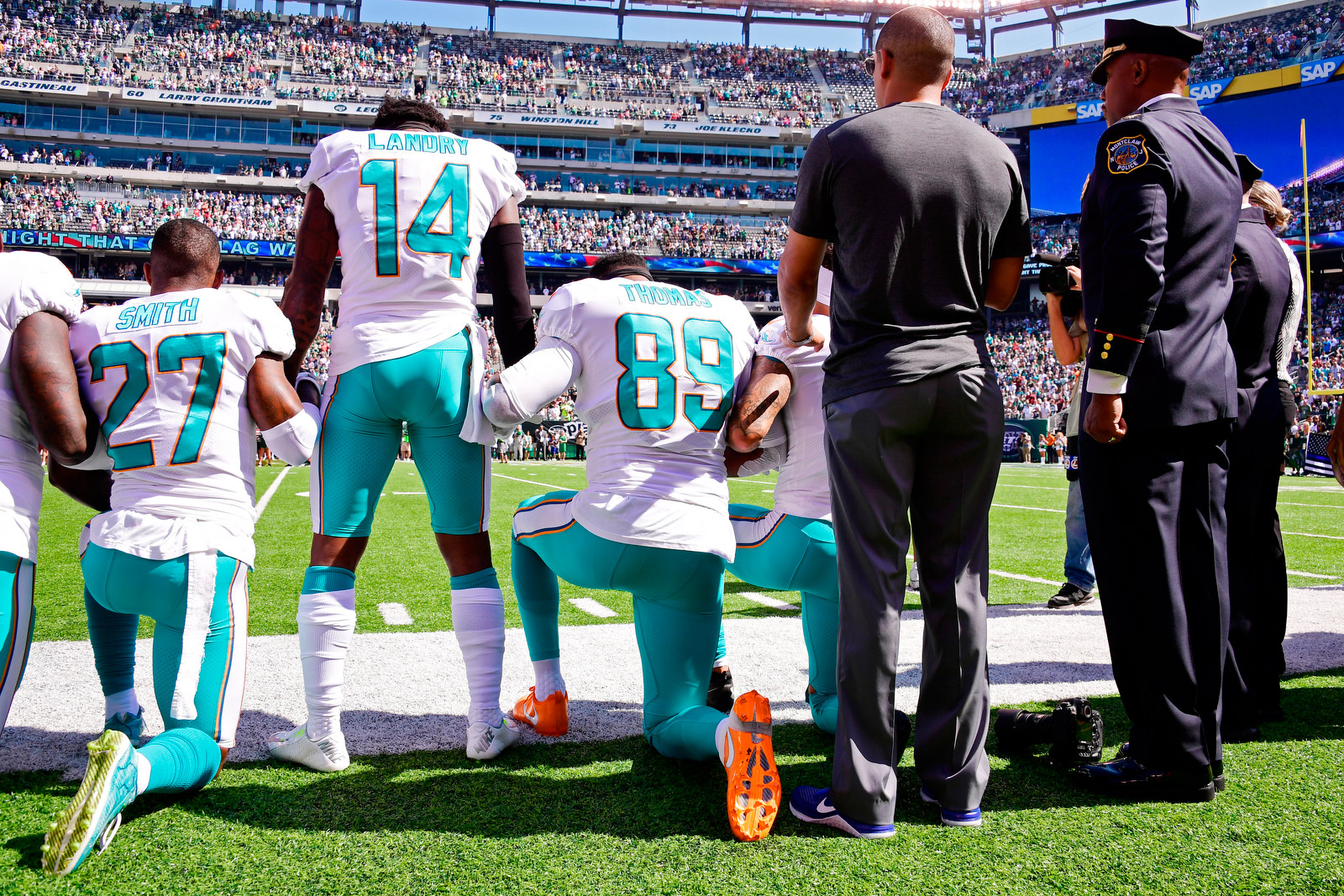 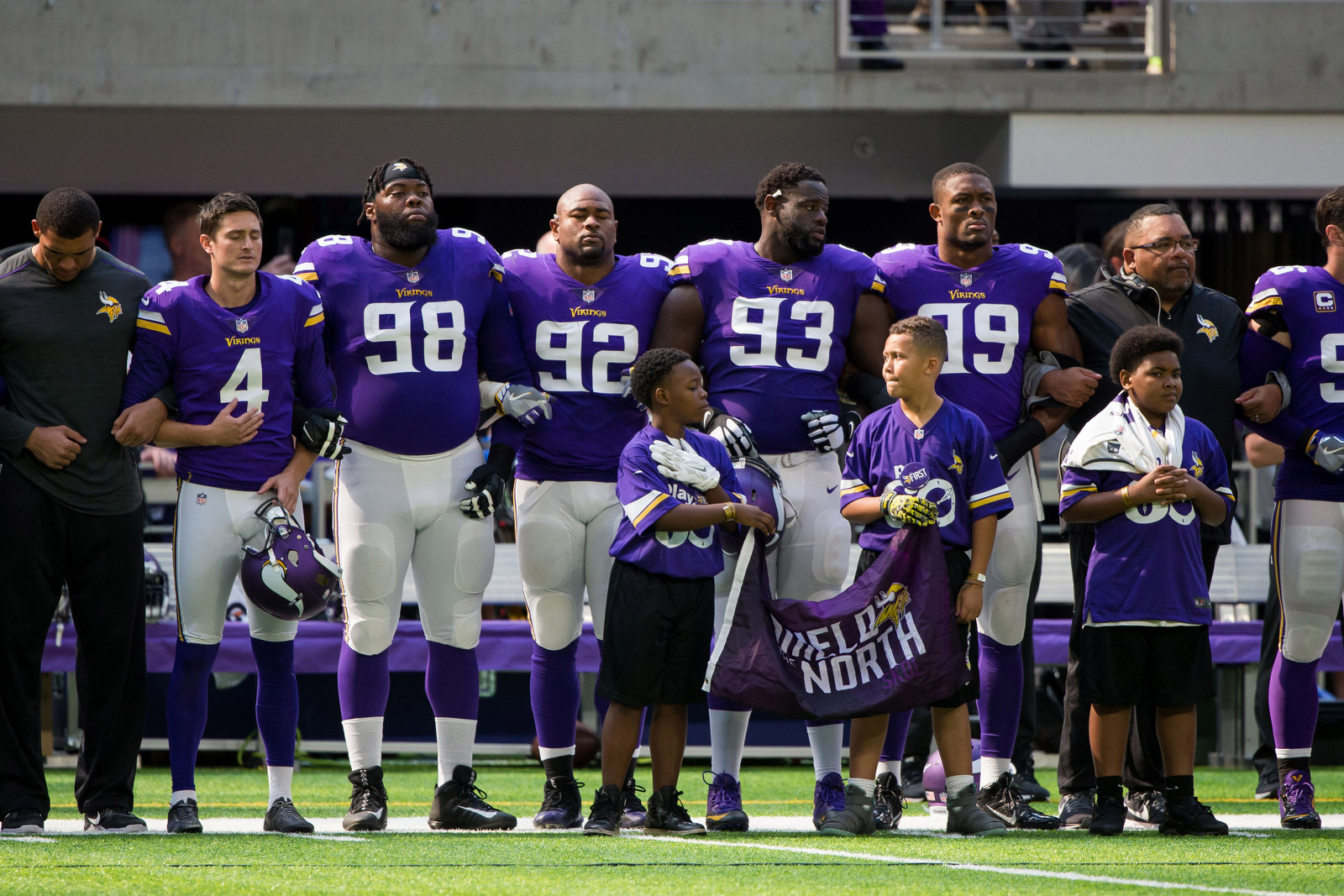 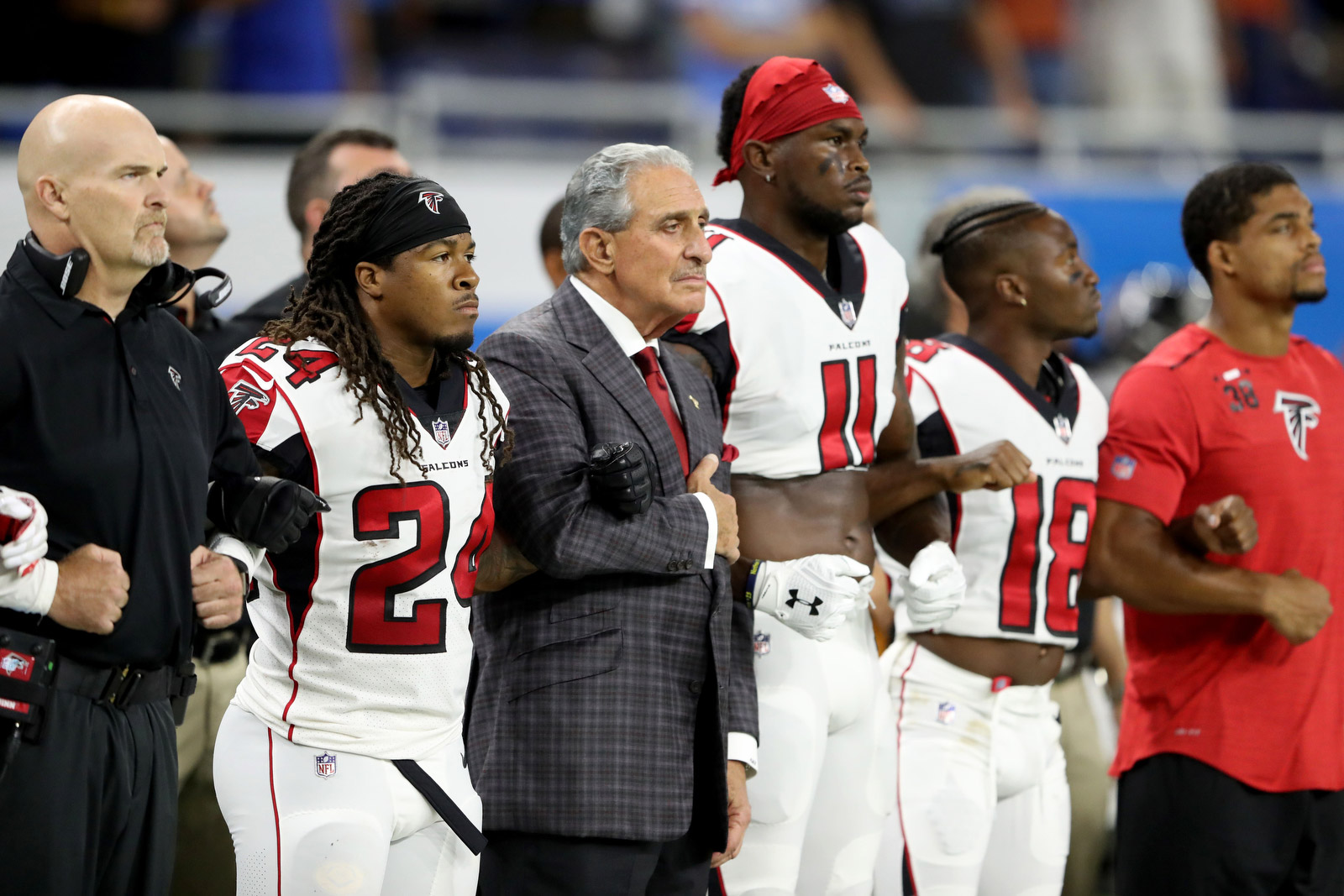 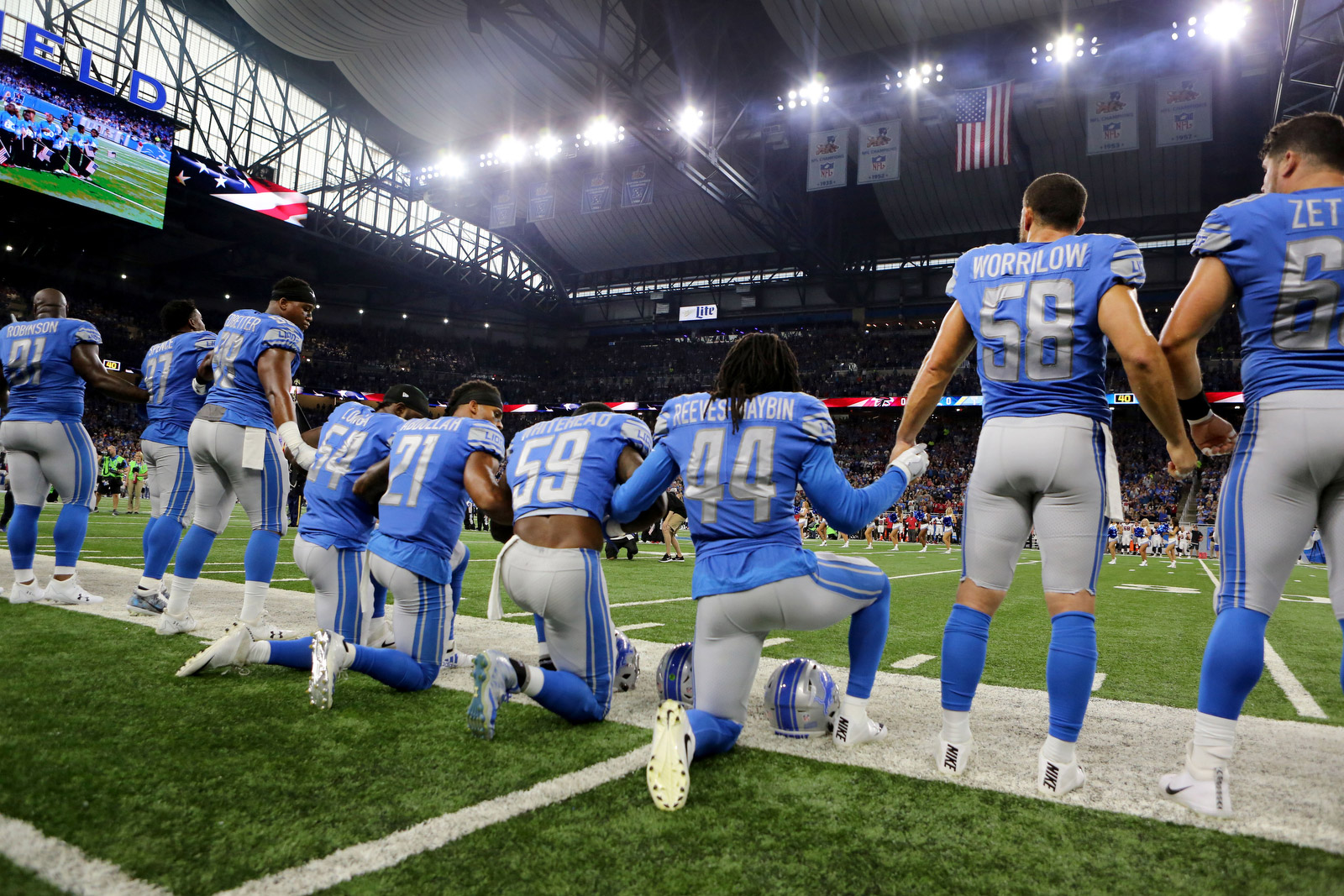 Detroit players support each other on the opposite sideline. Rey Del Rio/Getty Images 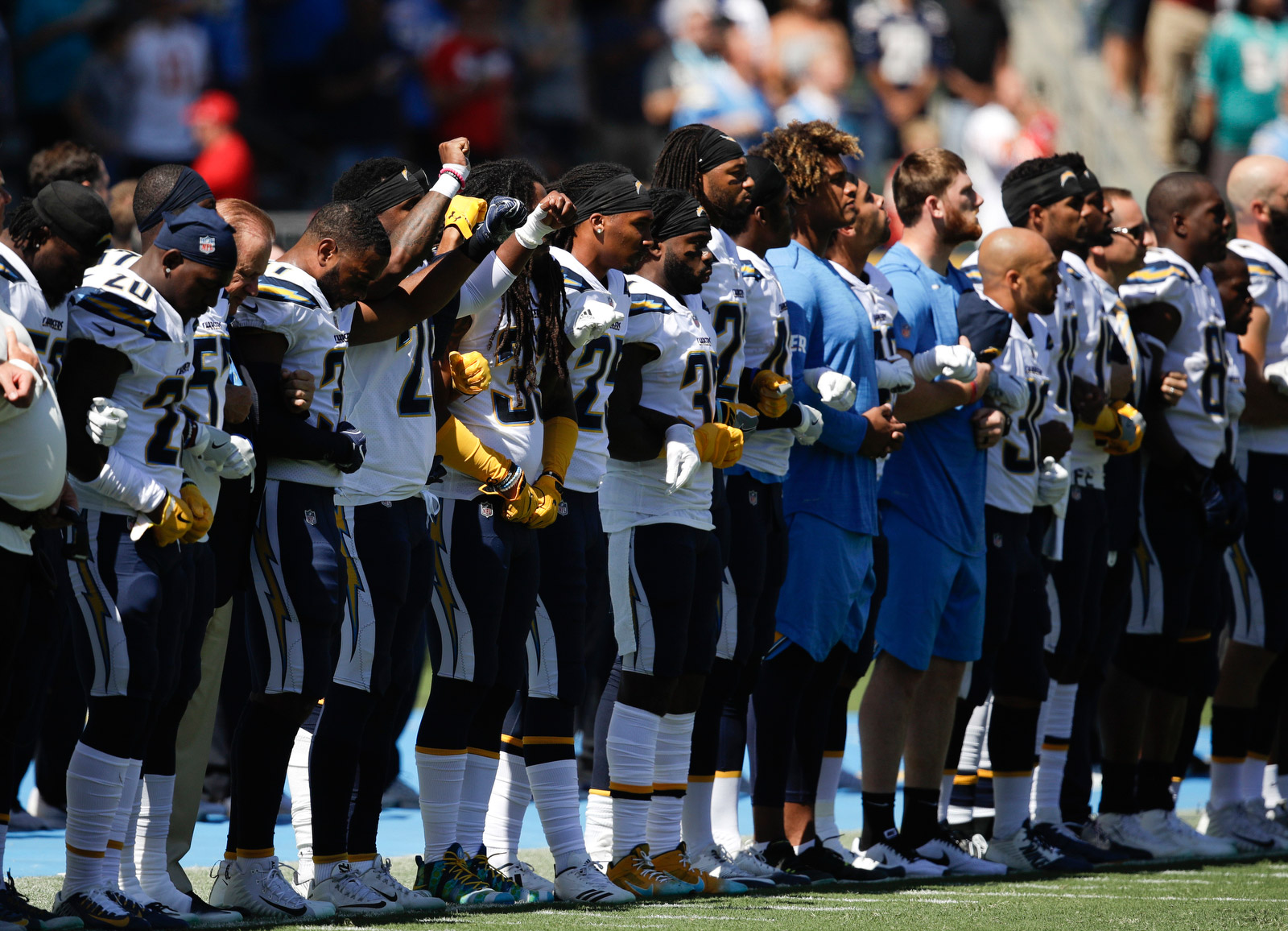 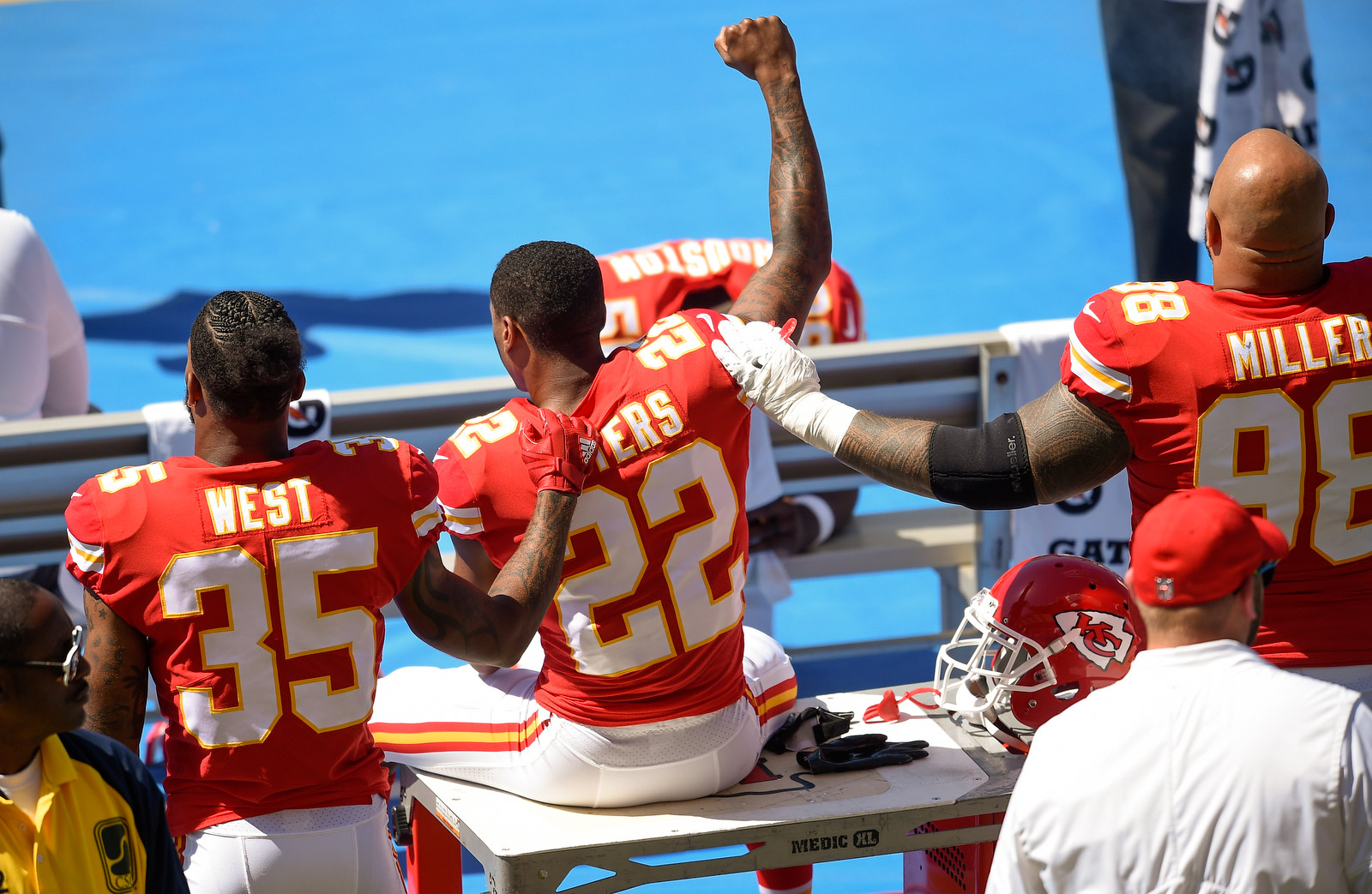 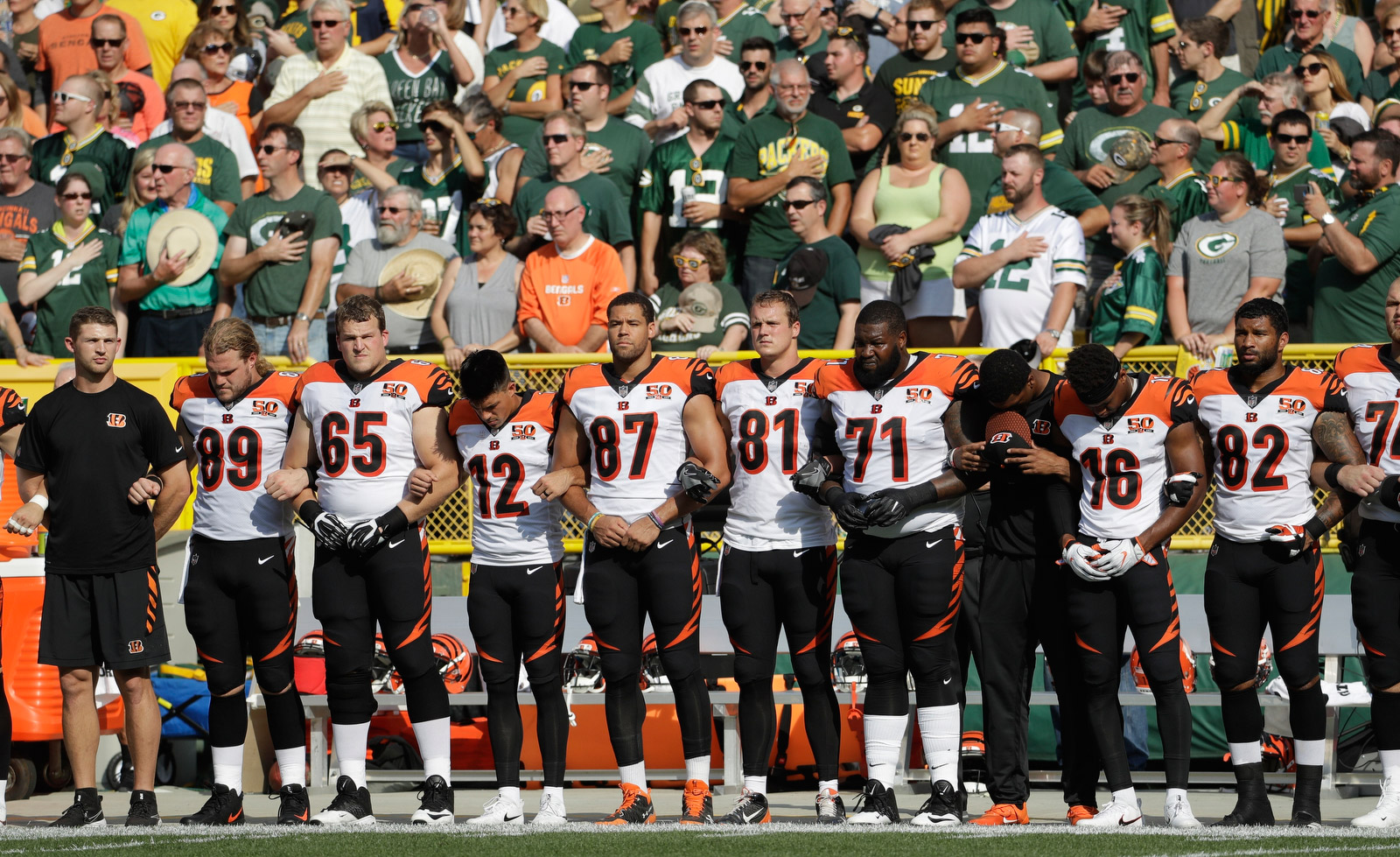 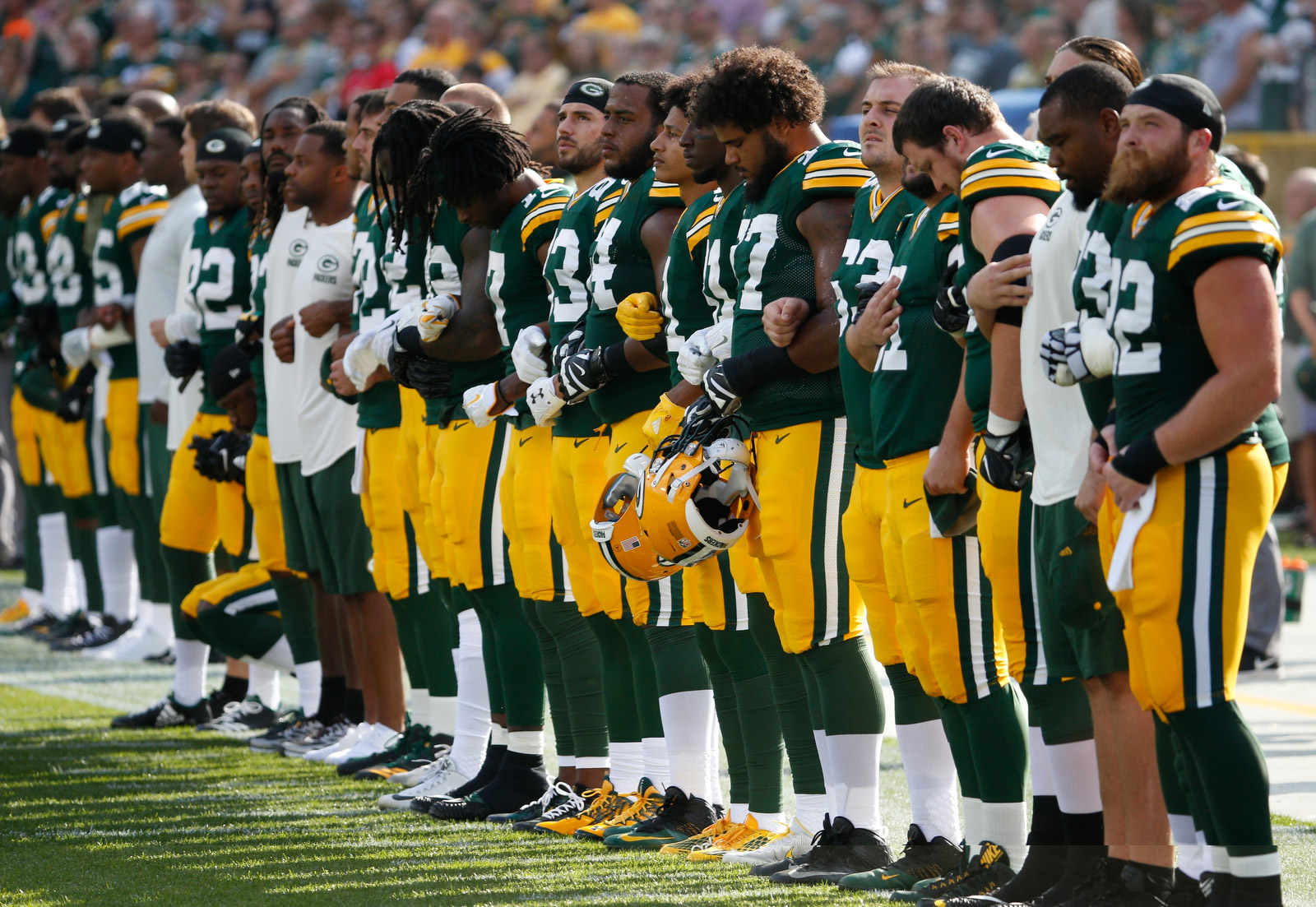 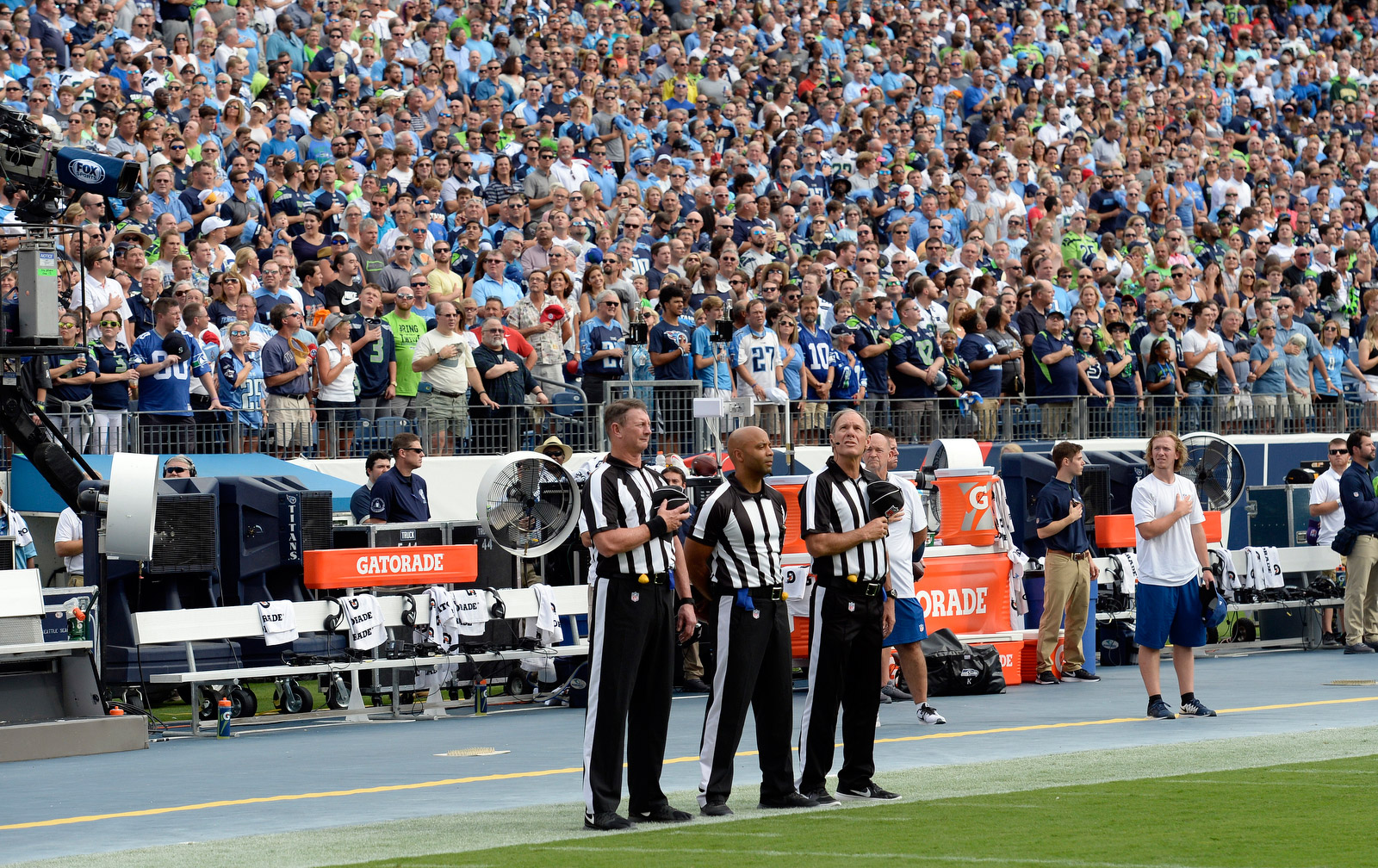 Officials stand for the anthem before a game in Nashville, Tennessee. Neither the Tennessee Titans nor the Seattle Seahawks came out for the anthem. Mark Zaleski/AP