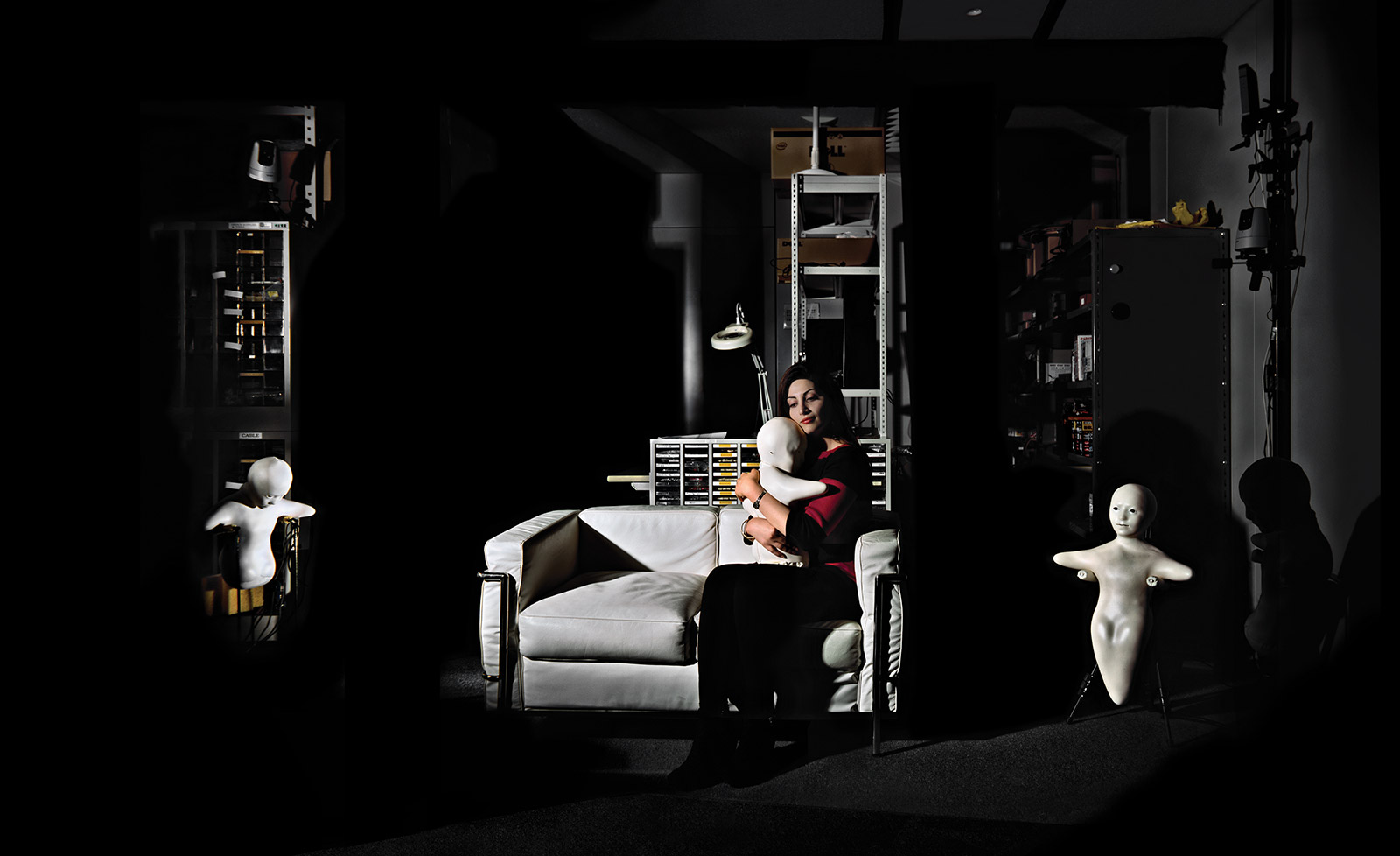 Robots and us: What’s next

A photographer catches a glimpse of the future as he visits some of the world’s leading robot labs Photographs by Max Aguilera-HellwegStory by Kyle Almond, CNN

Those lifelike robots you see on TV? They might not be science fiction for much longer.

His new book, “Humanoid,” explores the different ways that scientists are developing robots — and making them more like us. They look like us, sound like us and are also starting to think like us. Some are even designed to be replicas of actual people.

The reasons vary from lab to lab. There are robots built for entertainment purposes. Others are helping to solve real-life human problems. Sometimes experiments are designed for one thing but teach us another. 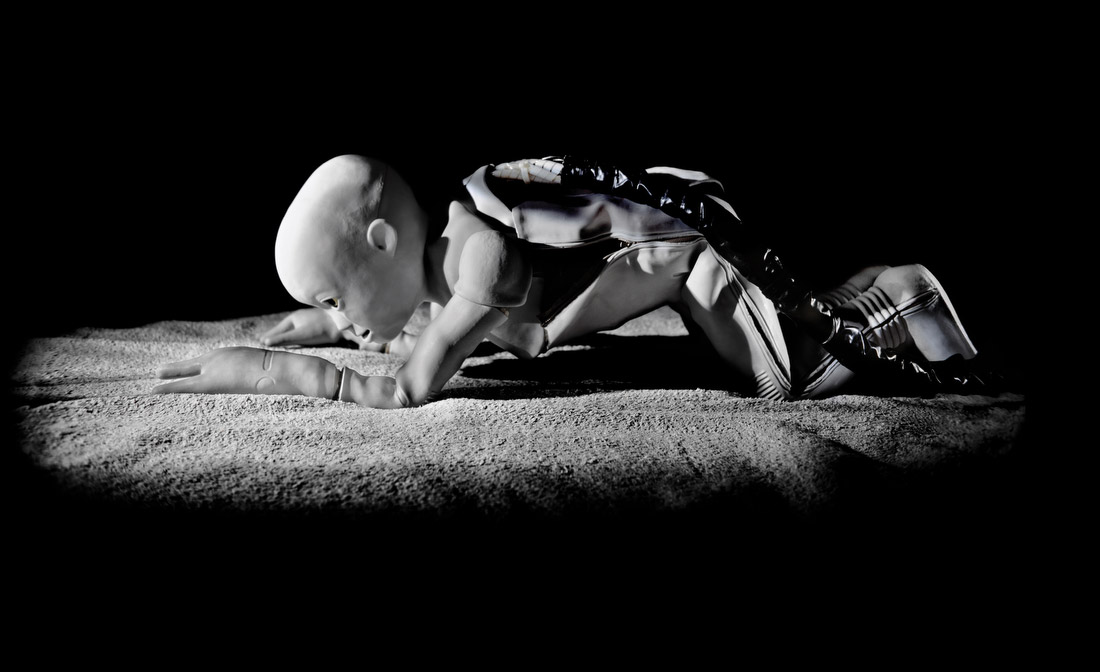 The infant robot CB2 was built to study artificial intelligence.

Take CB2, an infant robot built by the Asada Laboratory in Osaka, Japan. The idea was to study how robots learned by teaching one to crawl.

“But what they learned in the data didn't really teach them about artificial intelligence. The data revealed more about how humans learned,” Aguilera-Hellweg said. “It was about caregiver interaction. Because it was all about the caregiver relationship to CB2, teaching it to crawl.

“What they realized from that was they could get robots to learn about humans. When I learned this idea, this blew my mind. I never even thought about anything like that.”

As he took portraits of all these robots, Aguilera-Hellweg would find similarities with the human anatomy. He has a doctor of medicine degree, and this reminded him of what it was like photographing surgery.

“I found myself asking this very deep question: What does it mean to be human?” he said. “These things look like they're human. They have ears, they have skin, they have hair. But what about them is human? I was driven to find what was the essence of what was really going on here. To find that particular gesture, that light. I would spend a lot of time looking for that.” 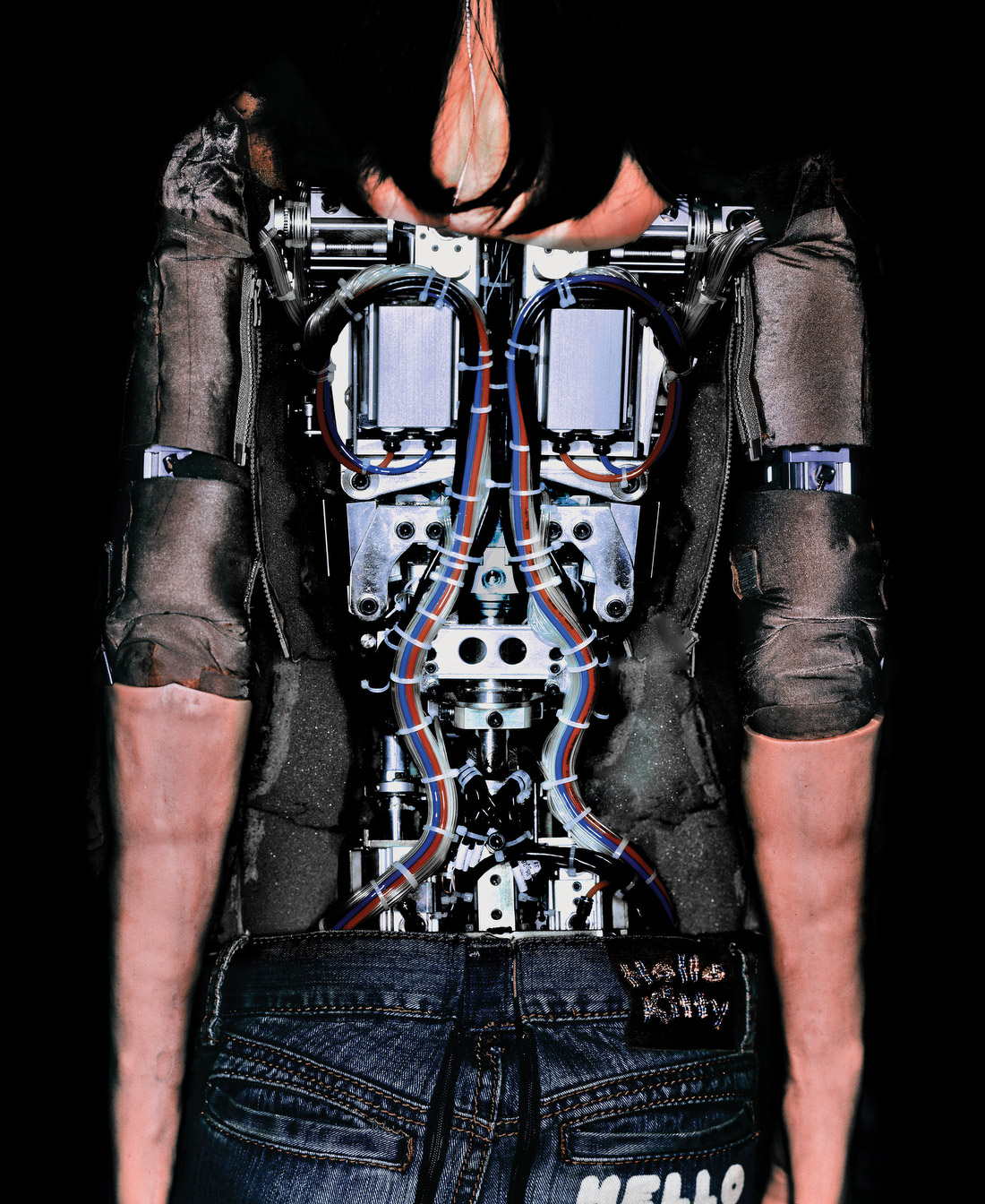 This female robot was built in Japan and loaned to Carnegie Mellon University in Pittsburgh, where a group of graduate students worked on enhancing her physical characteristics. The students rewrote her software and gave her a complete makeover that included hair, makeup, tattoos and a pair of Hello Kitty jeans. They also renamed her Yume, which means “dream” in Japanese. “The anatomy struck me as looking, in a way, kind of like a human back,” Aguilera-Hellweg said. “The red and blue looks like veins and arteries.” 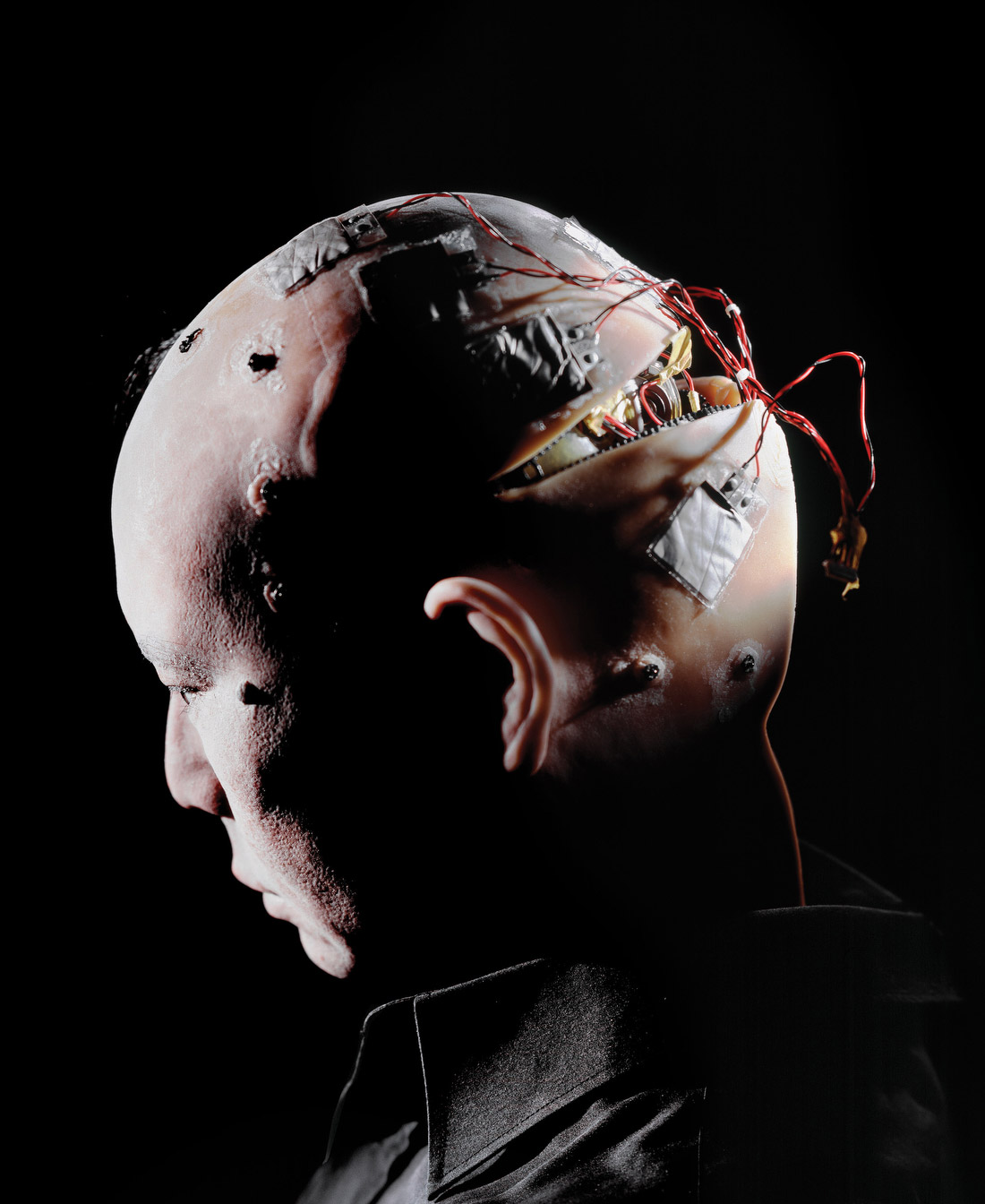 This is a geminoid of Hiroshi Ishiguro, one of the world’s leading robot makers. A geminoid is a robot designed to look exactly like a real person. “I asked (Ishiguro) to take off the hair so it could reveal the robotness around him,” Aguilera-Hellweg said. “Those little black dots are the pins, the little buttons that snap on the hair for him.” 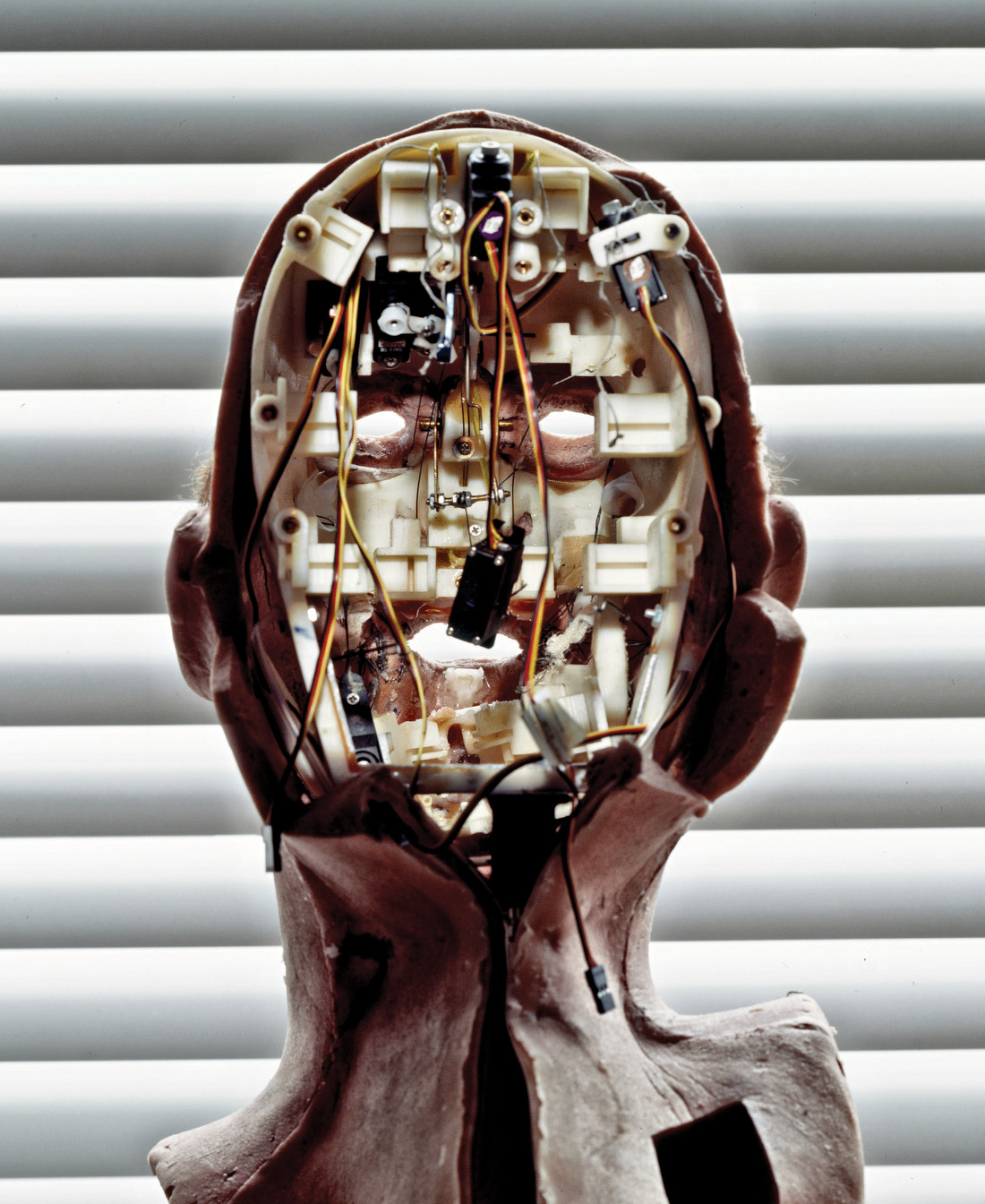 A look inside the head of an android at Hanson Robotics in Plano, Texas. This is what powers the robot’s facial movements, which include eye tracking and both verbal and nonverbal communication — things like frowning, grinning and winking. 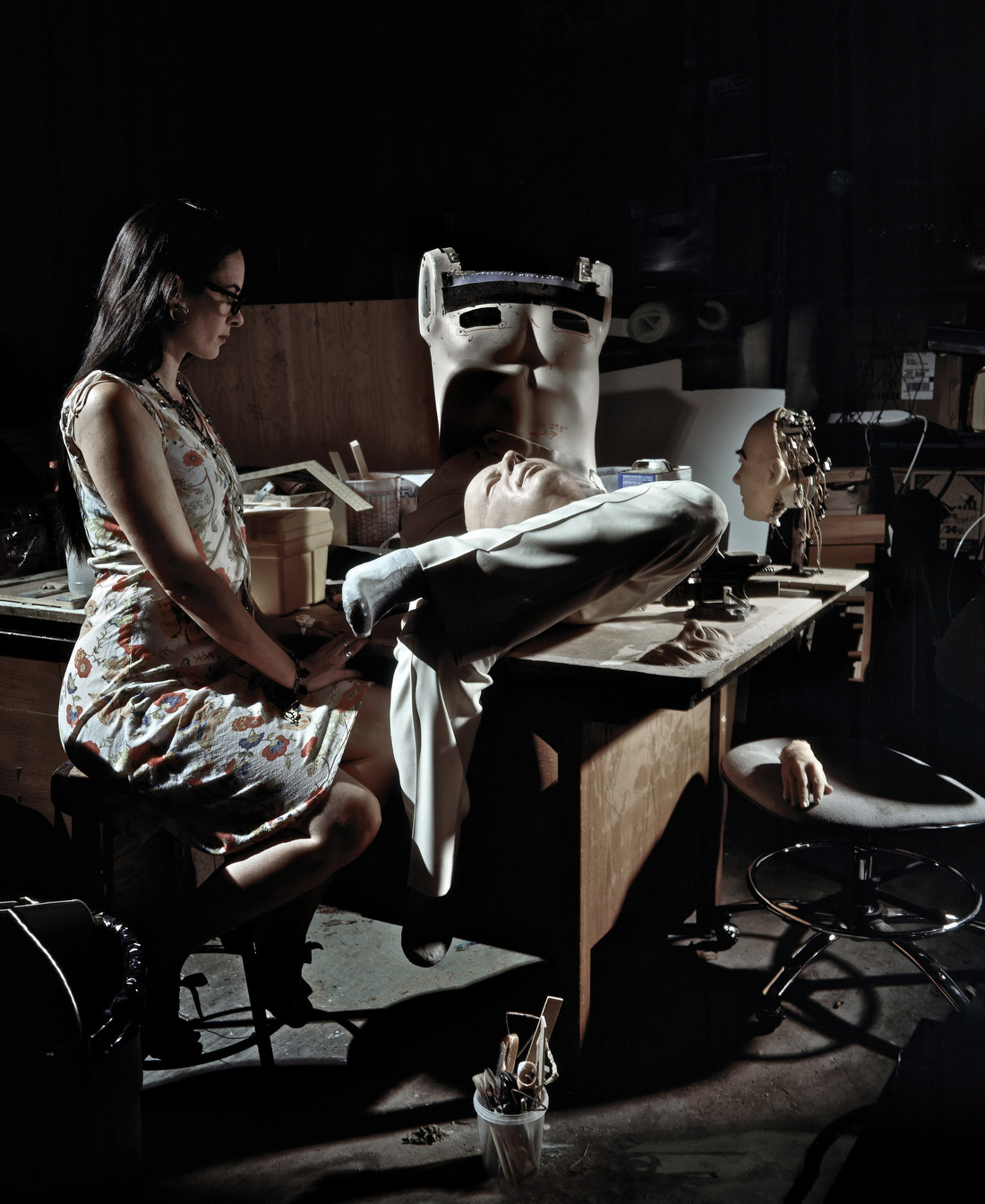 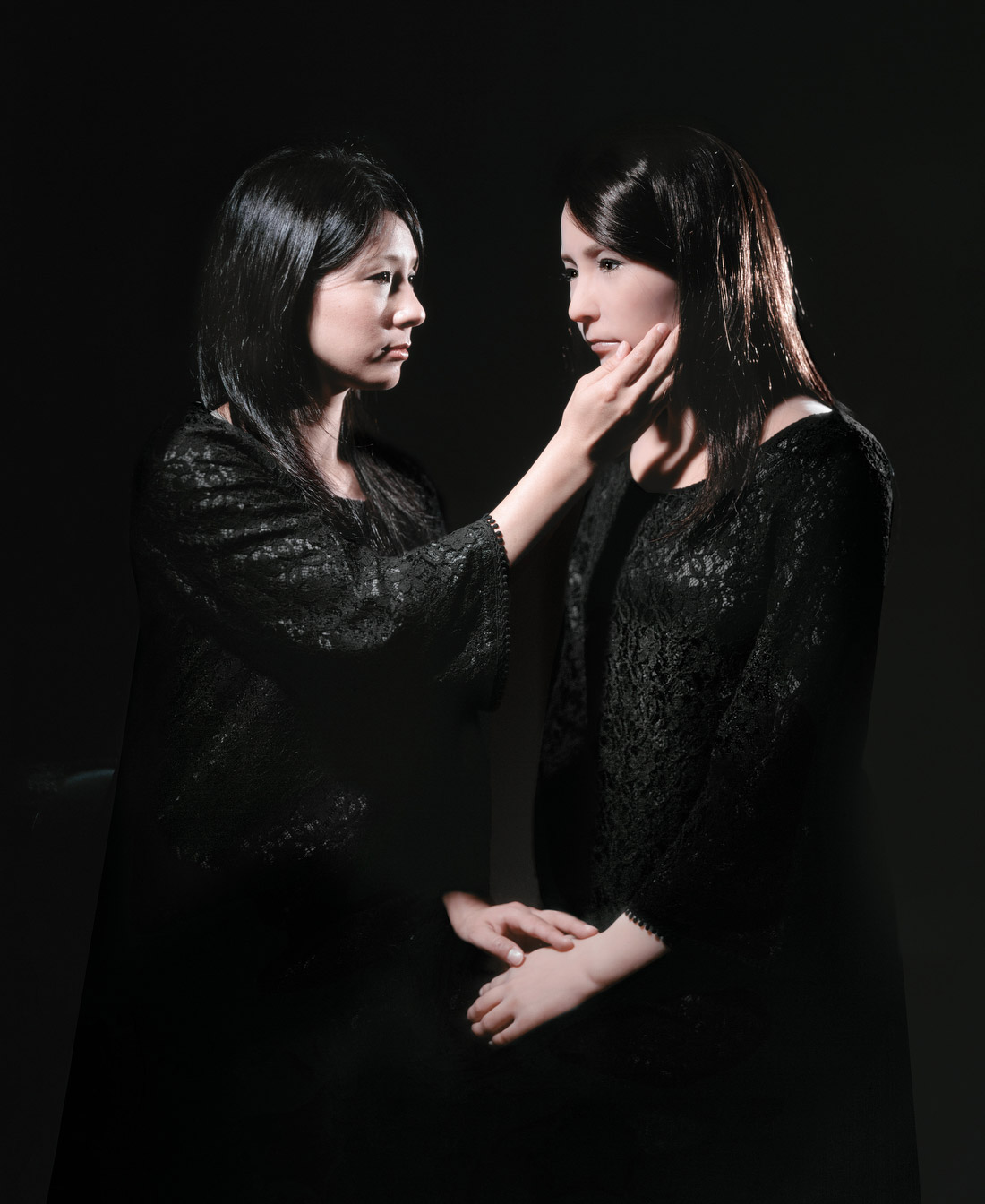 A woman touches her geminoid in Kyoto, Japan. This robot was featured in the Japanese film “Sayonara.” Aguilera-Hellweg said the woman expressed great fondness for her geminoid and over time had come to care deeply for her, as though they were long-lost sisters. “When I am apart from her or have not seen her for a while, I get sad,” she said. 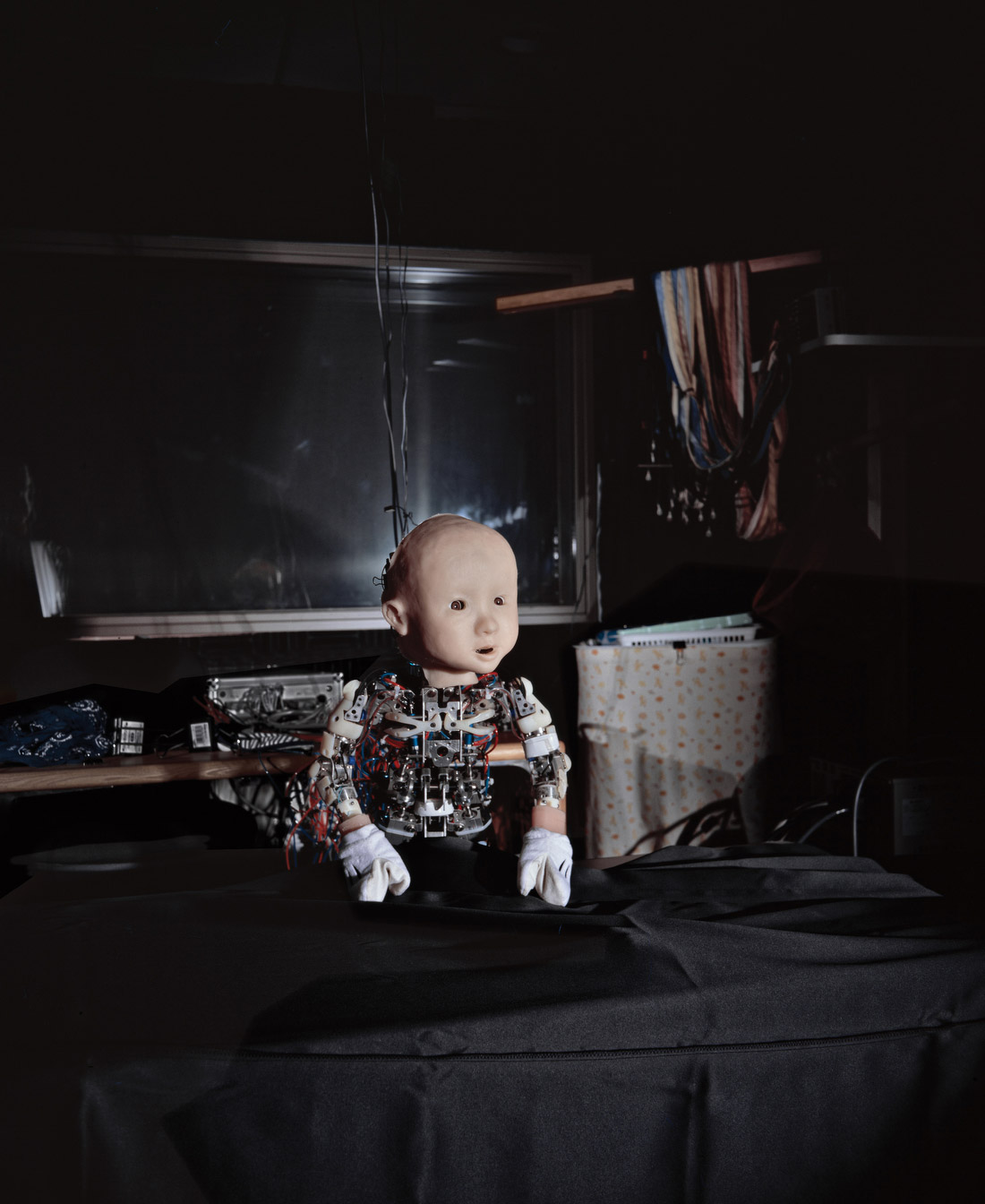 Affetto, a child robot, was a successor to the CB2 infant robot. He was built with realistic facial expressions to interact with human caregivers. Aguilera-Hellweg remembers how Affetto would track him with his eyes as he entered the room. He said the mannerisms of robots are becoming so lifelike that he found himself easily dropping his guard. “It's like watching television or watching a movie where you suspend disbelief and you become emotionally connected to these things,” he said. 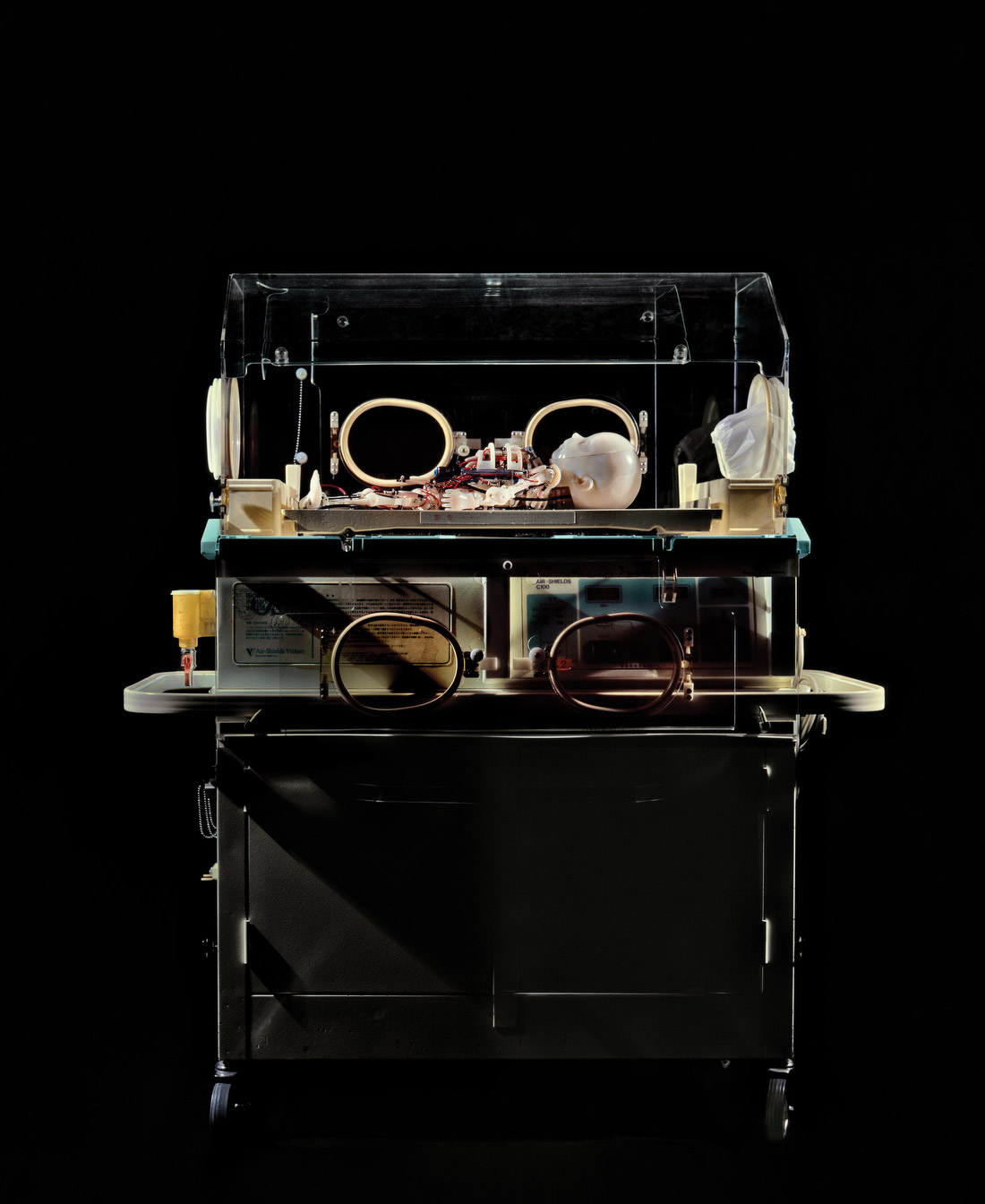 The Asada Laboratory also built a robot that resembled a 35-week-old fetus. This way it could study the medical issues of premature birth. 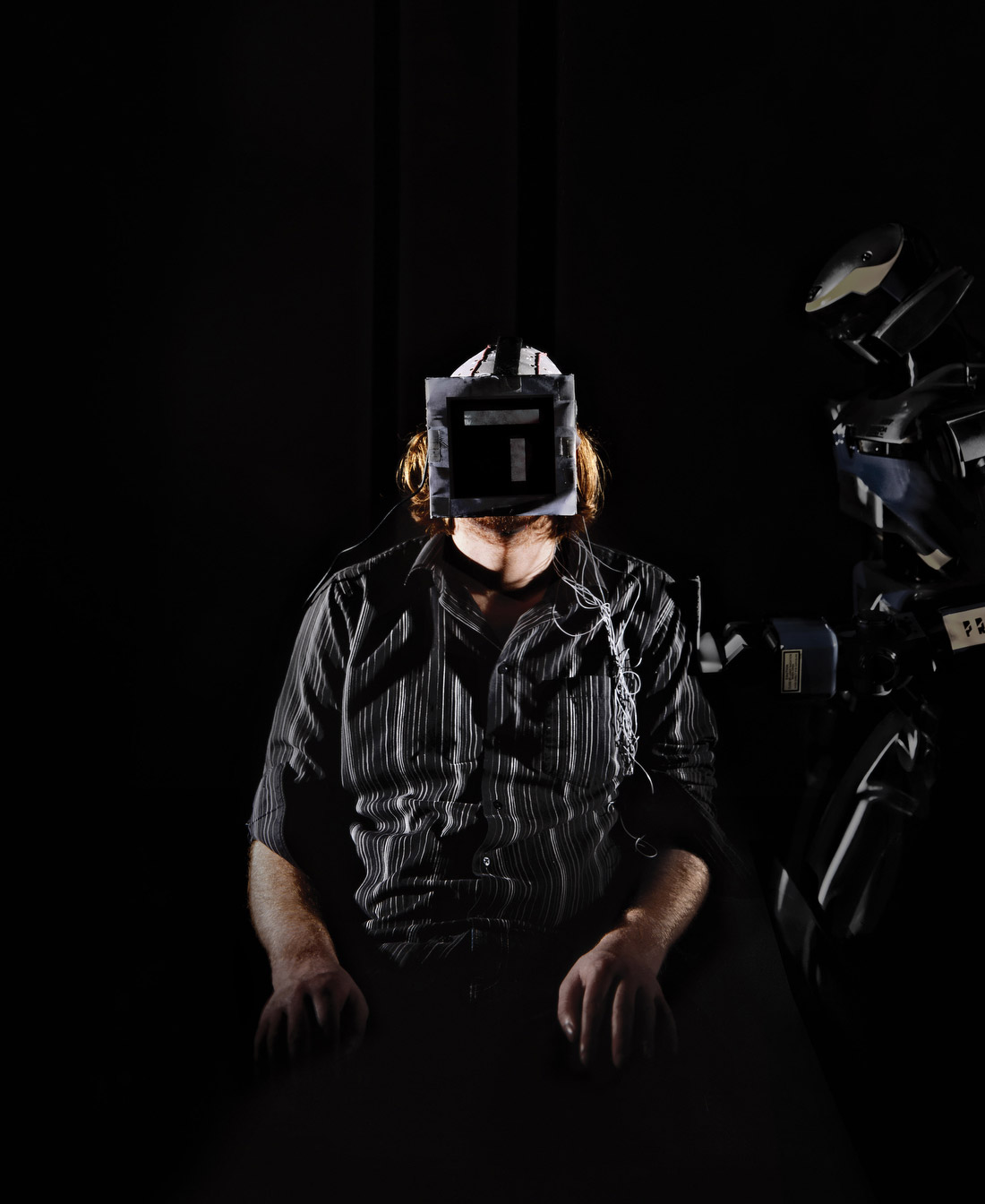 A human user wears a virtual-reality headset designed to let him see through the eyes of a robot. The goal of the study was also to control the robot with one’s thoughts. 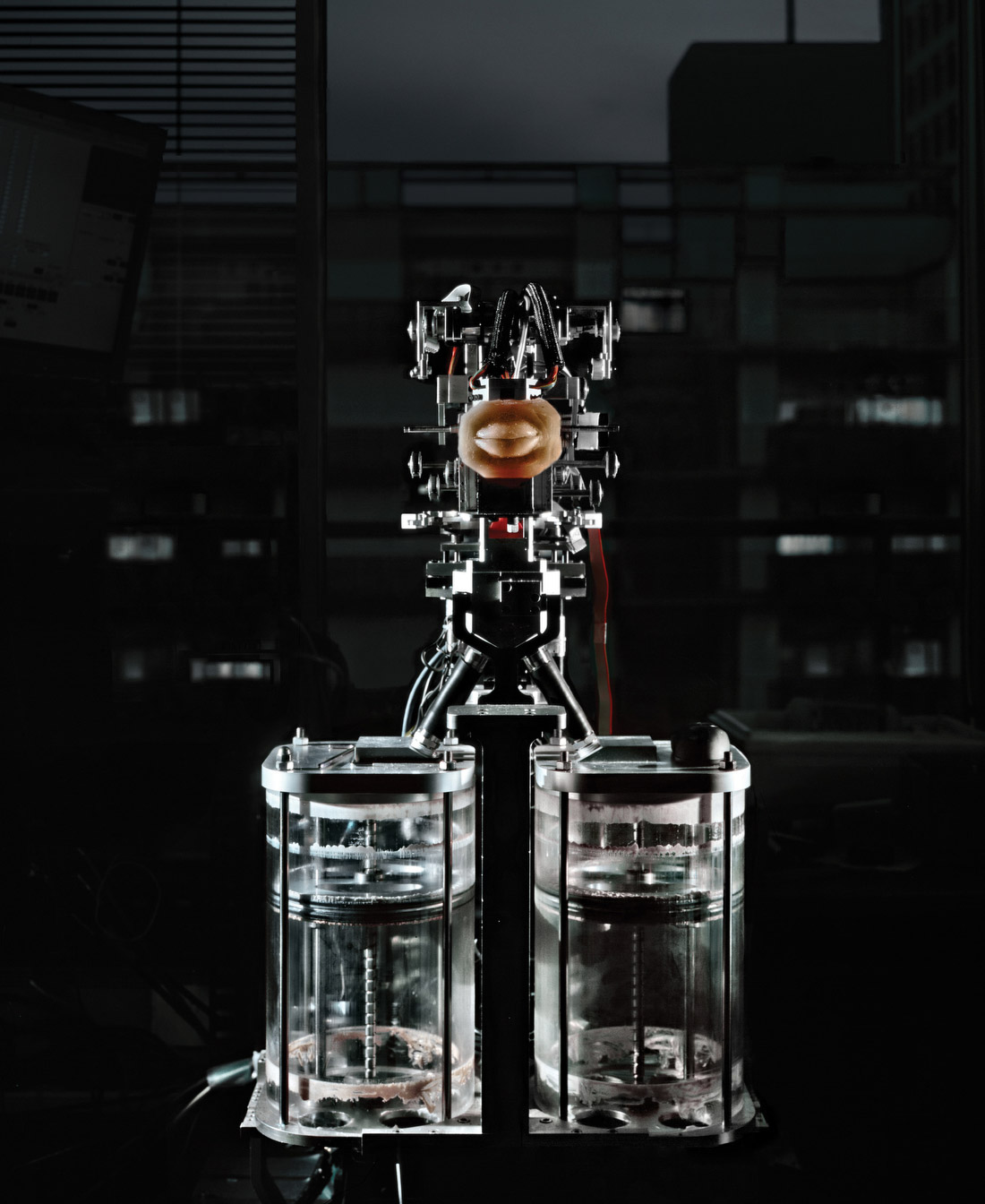 These robot “lungs” were designed to produce speech like a human does. The two canisters create air pressure to vibrate mechanical vocal cords. 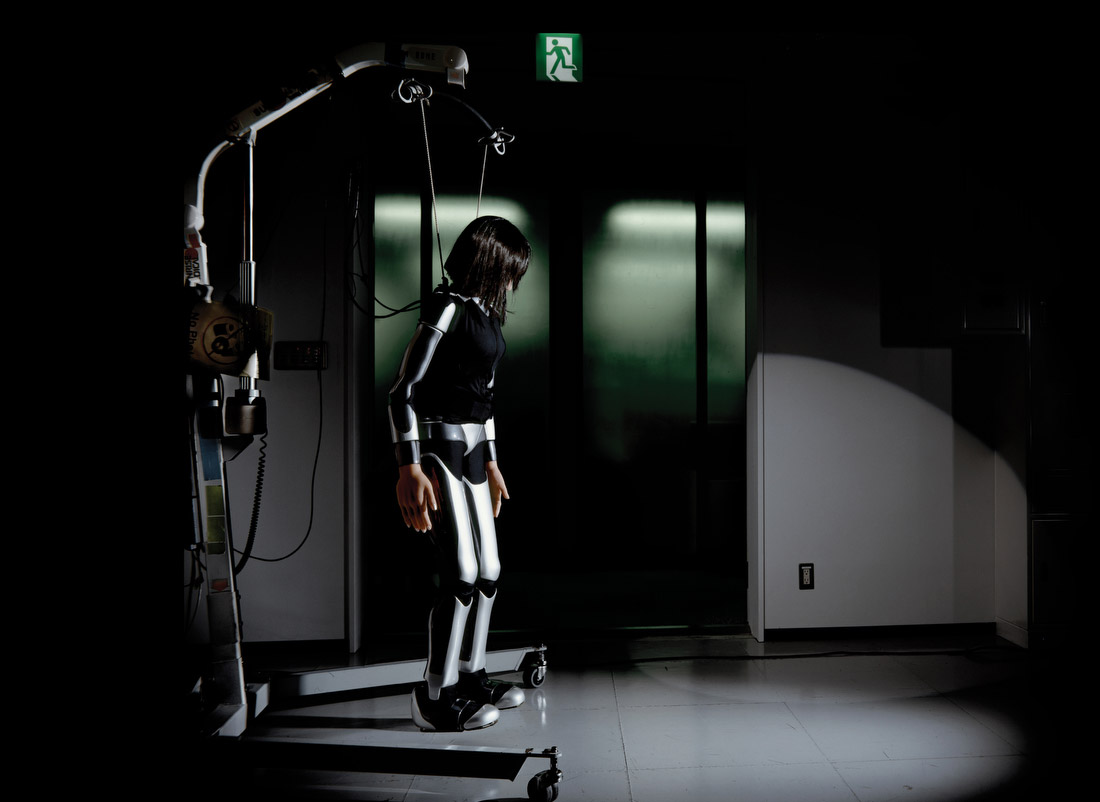 HRP-4C was developed by a research facility in Japan called the National Institute of Advanced Industrial Science and Technology. She has the appearance and shape of a human, can move like one and can also interact with humans. In this instance, she was being used to test a specialized piece of equipment that would assist people in lifting an object they were unable to pick up from the floor.

Max Aguilera-Hellweg is a photographer represented by Institute. His new book, “Humanoid,” was published by Blast Books and is now available.