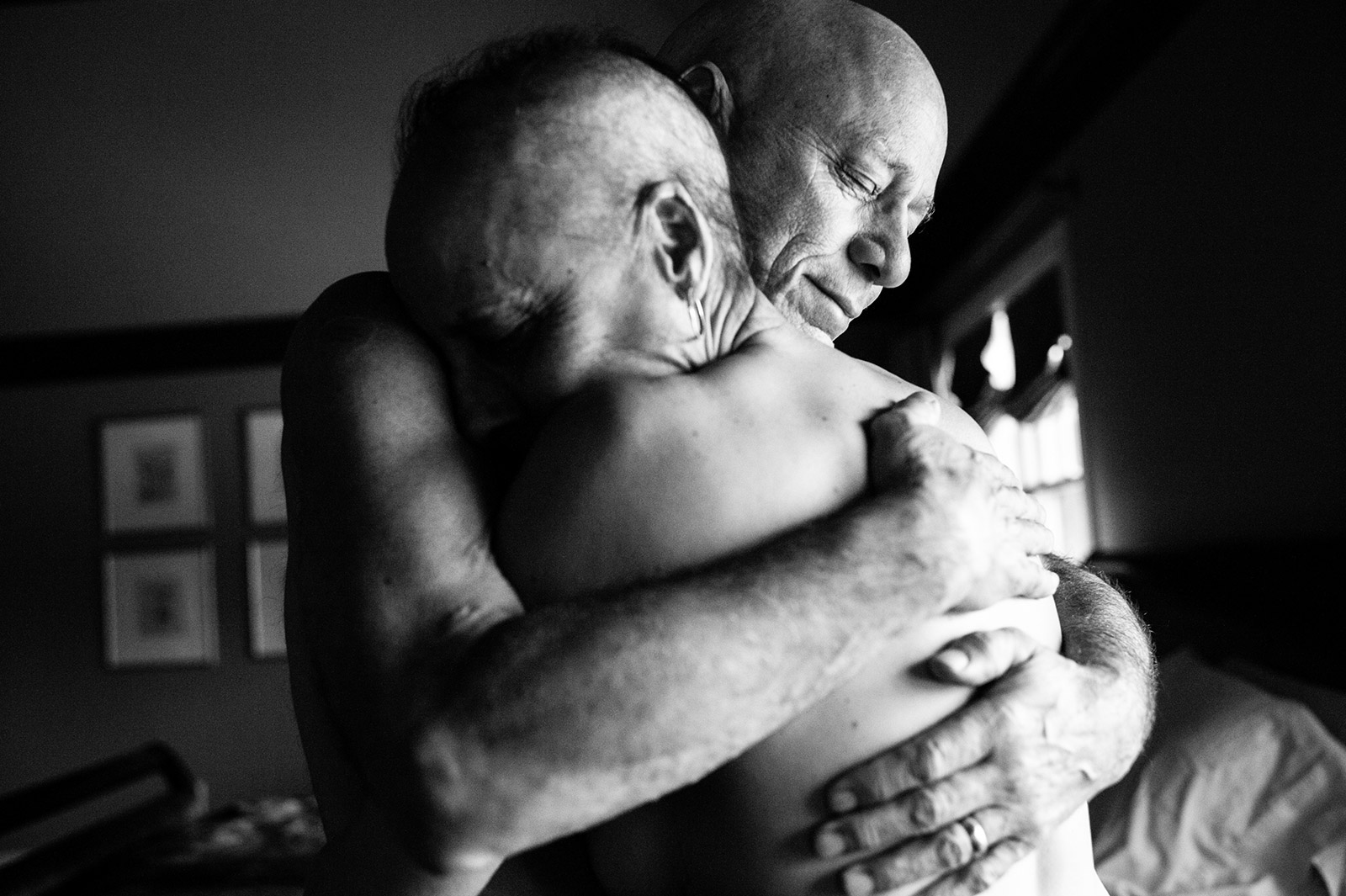 The gift of time: Life before death

As both of her parents fight cancer, a photographer shares their struggles and joys Photographs by Nancy BorowickStory by Katherine Dillinger, CNN

Many parents hand down lessons around the dinner table or while chauffeuring their children from activity to activity.

Nancy Borowick’s parents shared their most powerful wisdom as they were dying.

Nancy's mother, Laurel, received her first breast cancer diagnosis in 1997, at the age of 42. She spent the next 17 years in and out of treatment.

The disease became “another line item on her to-do list,” said Nancy, a photographer who chronicles her parents’ lives — and deaths — in the new book “The Family Imprint.” “It was just a part of her daily activities; it wasn’t who she was. Cancer gets the same priority as the Girl Scout cookies.”

Laurel’s cancer returned for a third time in 2011. The next year, her husband, Howie, was diagnosed with inoperable pancreatic cancer, and “everything shifted.” Nancy and her siblings, Jessica and Matt, became the caretakers of the family. 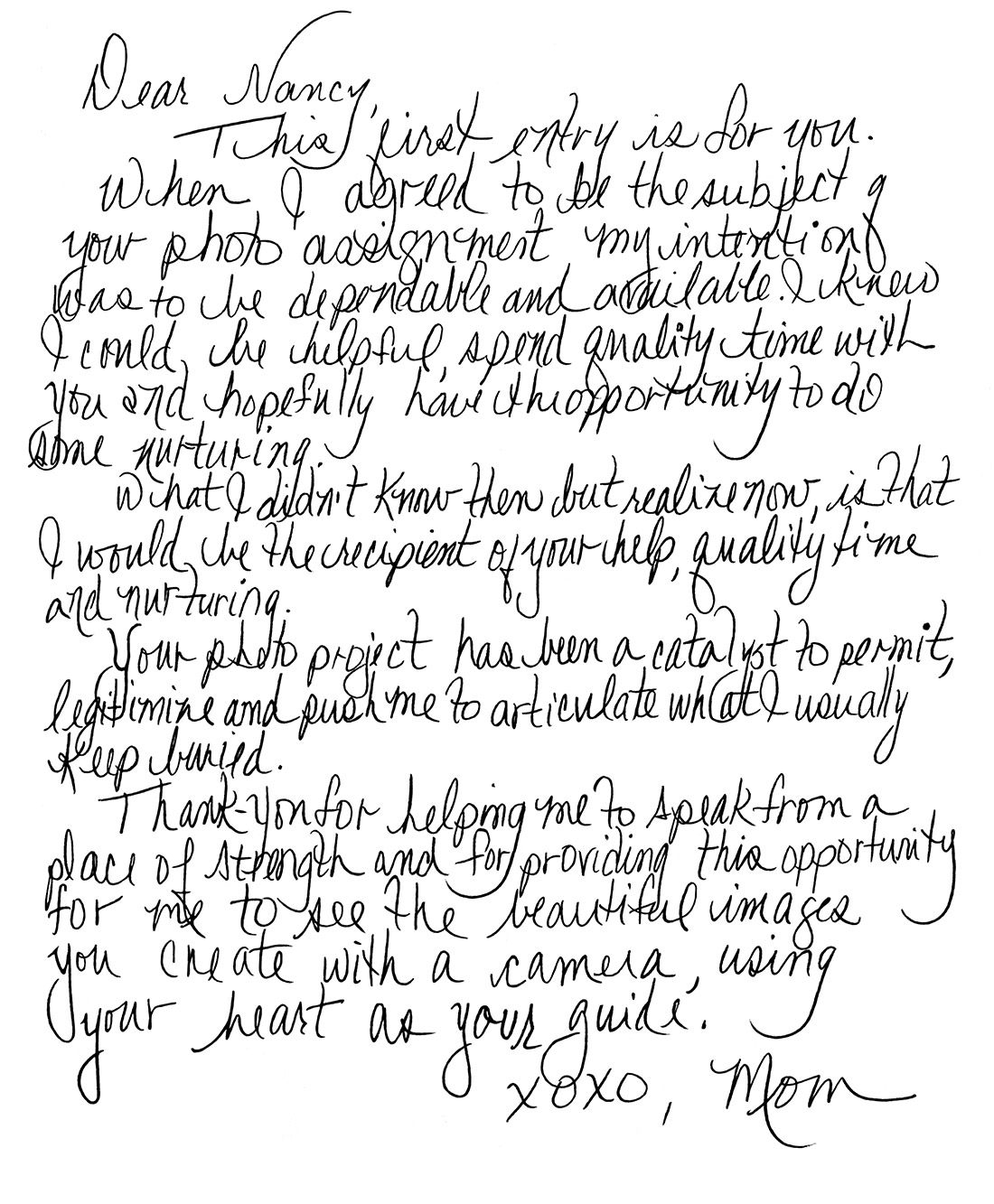 Laurel Borowick wrote this letter to her daughter Nancy in 2010. Nancy’s book, “The Family Imprint,” includes photos as well as notes, greeting cards and other keepsakes she gathered as her parents fought cancer.

“I know it was a really big challenge for them to allow me and my siblings to help them,” Nancy said. “I was there for distraction, and I was there for compassion and a sympathetic ear, and at times, I was there as an entertainer. I remember many times I danced for them. I feel like I reverted back to being their child. And in some way, maybe that helped them.”

The family’s goofy humor sustained them: When Howie shaved his wife’s head after her third diagnosis, she used the trimmings to give the dog eyebrows. Later, the oxygen machine that followed her around became known as WALL-E, after the trash-collecting animated robot.

Howie, who lost his own parents to cancer by age 15, lived by one philosophy: Life is a gift, with nothing promised, so appreciate everything you have and make it count. It was a perspective shared by his wife and their children, who drew some comfort from the fullness of his life after he died in December 2013. 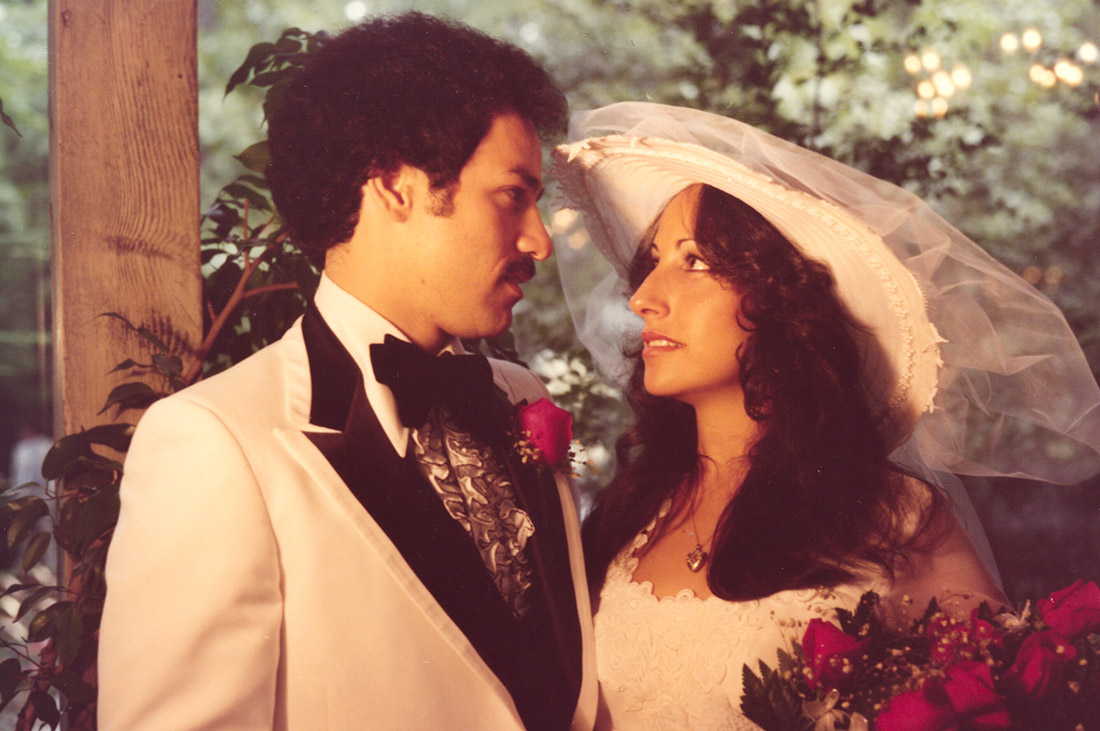 Howie and Laurel Borowick were married in 1979. 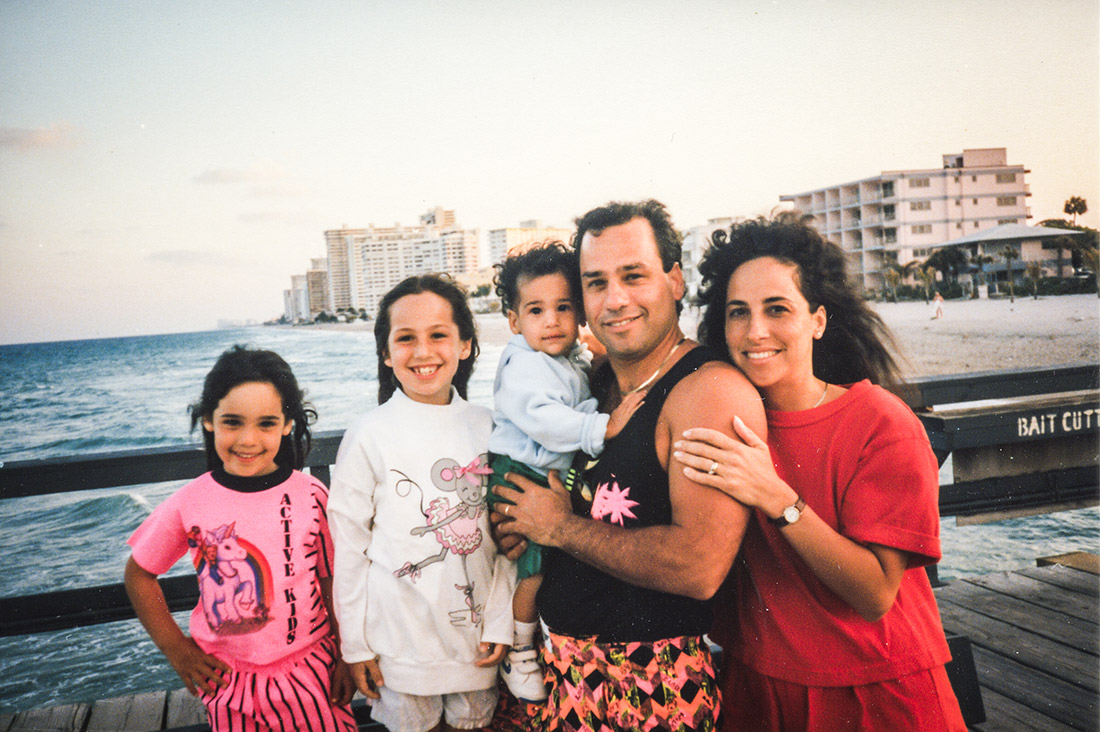 The Borowick family poses for a photo in 1990. From left are Nancy, Jessica, Matthew, Howie and Laurel.

Having watched her husband of 34 years die in a hospital, Laurel made a decision, Nancy said: “I do not want to die in the hospital. I want to die in my home, in my bed, in my pajamas. I want to enjoy the time I have left. I want to drink hot chocolate with marshmallows. I want to watch movies and tell stories.”

The next 364 days were difficult, a whirl of machines, medications and unfamiliar hospice workers. But there was also love, silliness, lots of food — and the comforts of home.

“I don’t know — if we were in the hospital — if we could have the conversations around the dinner table at 10 p.m. about what her hopes are for our futures and why she could close her eyes at the end,” Nancy said. “There’s a fear and intimacy in those last weeks in the home because it was such a personal space.”

Laurel Borowick died — at home, in bed — one day before the first anniversary of her husband’s death. Her ability to think of others and keep perspective to the very end helped her children come to terms with the loss. 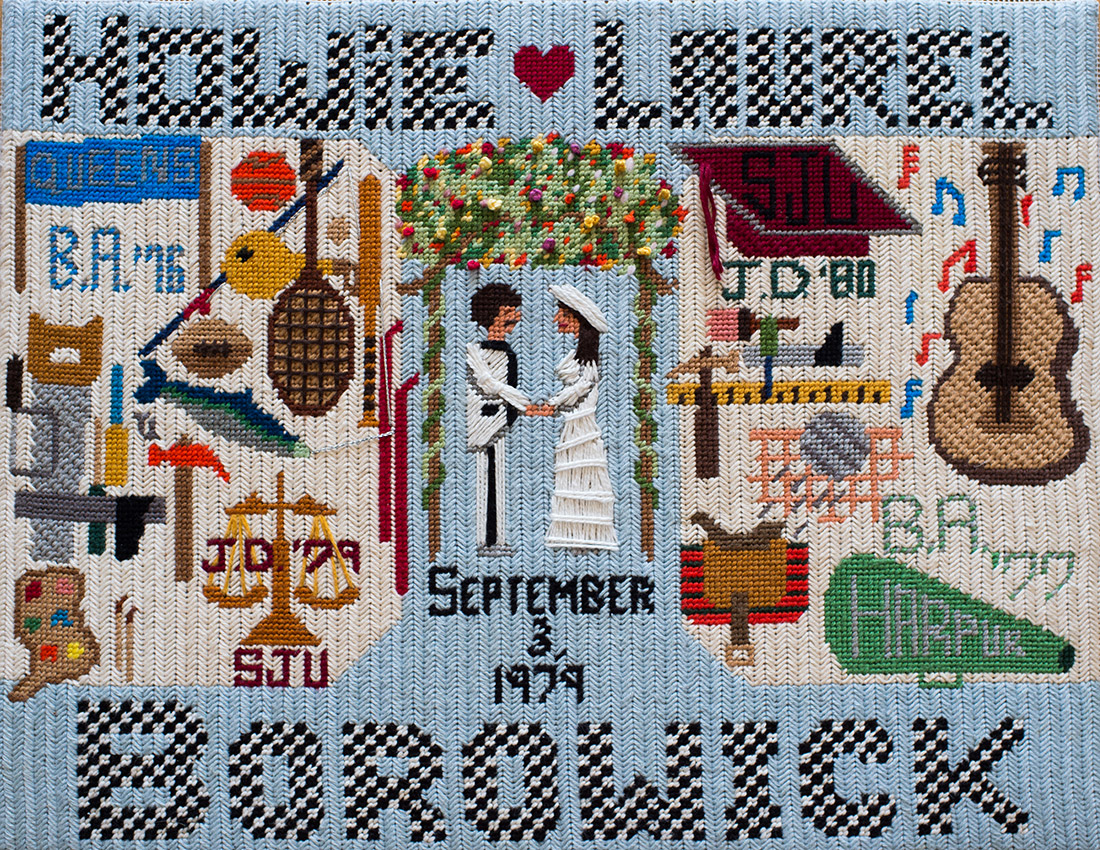 “Dad loved to do needlepoint,” Nancy Borowick wrote in her book. “He said that it was a way for him to relax and be creative. ... This was a piece that he made around the time he and Mom got married, perfectly including the important details about their lives together. His 1970s mustache is totally on point.”

To hold on to her parents’ memories and perhaps show others who are struggling with illness and death that they’re not alone, Nancy compiled the family photos she’d been taking for four years — as well as notes, greeting cards and other keepsakes — into a book. But the American publishers she approached weren’t interested, she said: “Nobody wants to buy a book about death.”

She was surprised by the dismissal. “Mine is so obviously not about death and illness. It’s about life and joy and humor and not taking things too seriously. We don’t talk about death in our culture, and it’s really a shame.”

Nancy noted the importance of “talking about end-of-life care and what to expect and how to best take advantage, as scared as you are, of the time you have left.”

She and her husband, a lawyer whose own mother died of cancer when he was in high school, took her parents’ life lessons to heart. In search of an adventure, they moved to the US territory of Guam, in the Pacific Ocean.

“I live a much fuller, more meaningful life because I appreciate things so much more,” she said. “One of the best gifts my parents gave us was not only this awareness of time but what they did with that time. And having that awareness of time is a very special kind of perspective. It shapes my every day.” 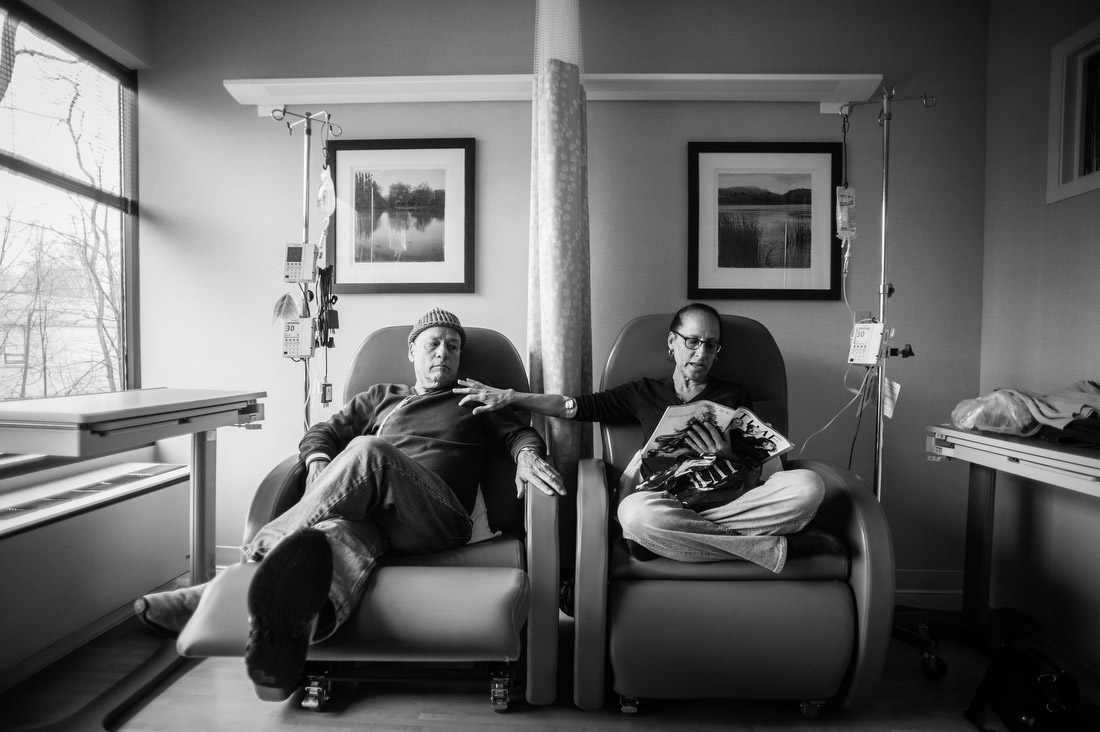 Howie and Laurel Borowick received their weekly chemotherapy together. “There’s nothing like having a partner in life to share the good times and the bad times,” he said. 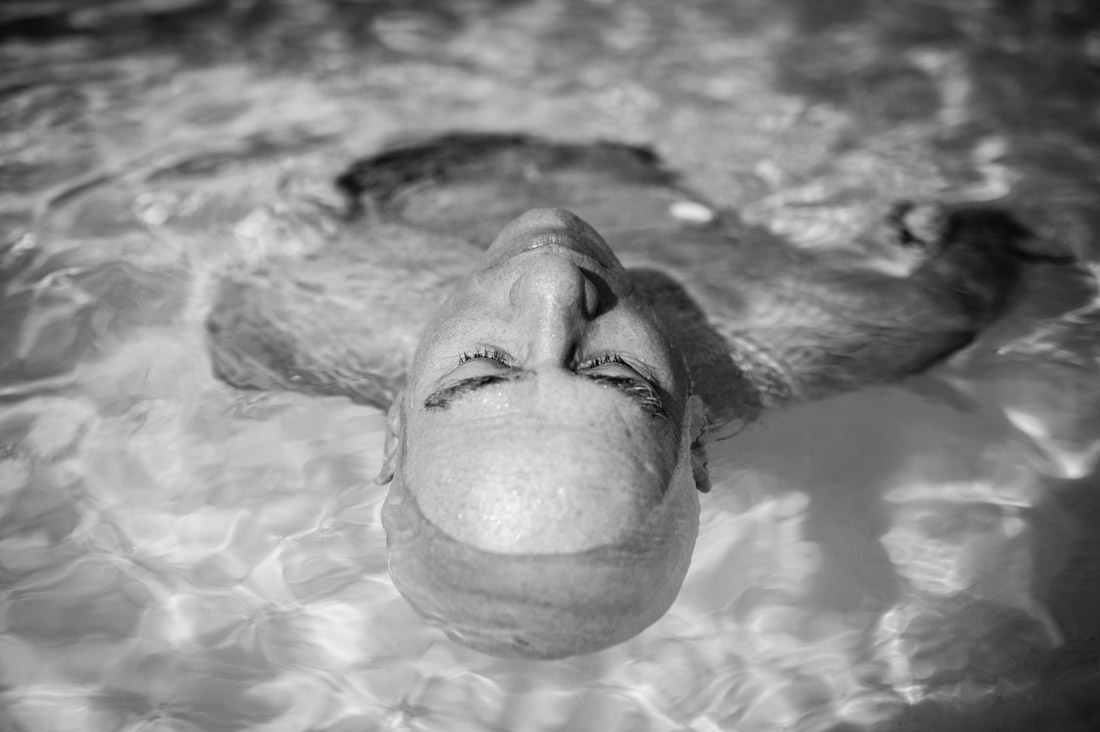 Amid the chemotherapy treatments, the family also took spontaneous vacations. 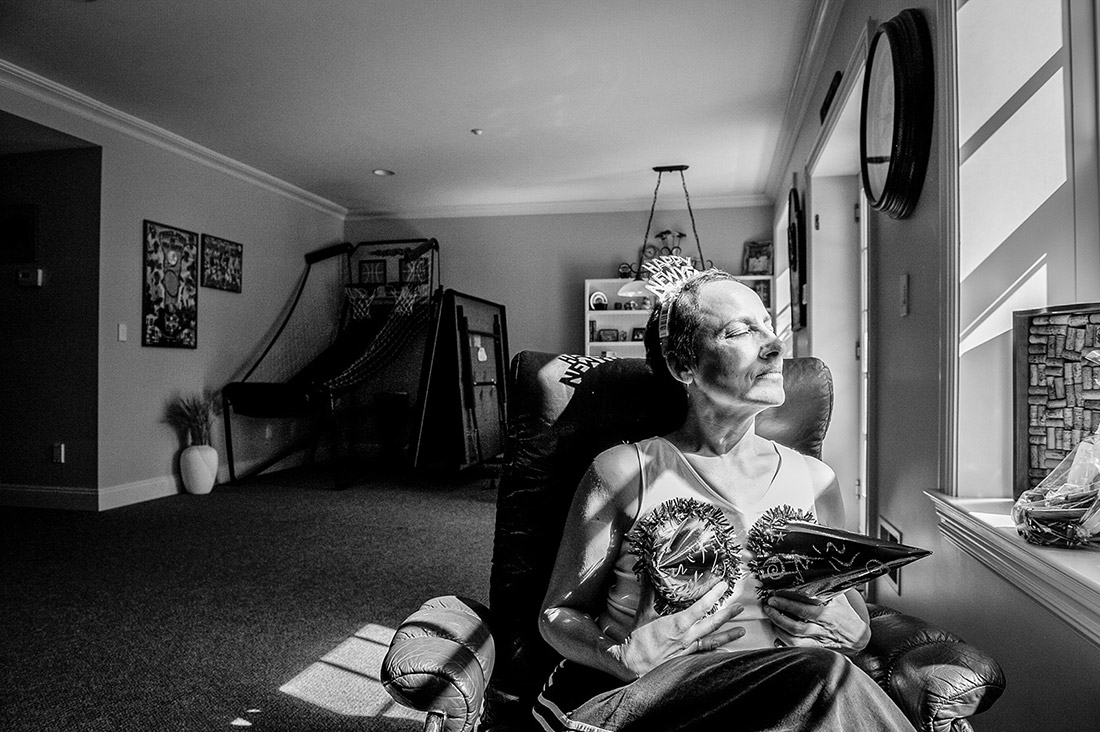 This photo of Laurel Borowick “talks about strength and beauty and silliness and peacefulness,” her daughter said. “I can put myself in her shoes in that moment. I can sit in that warm sunshine, and I can feel what she was feeling.” 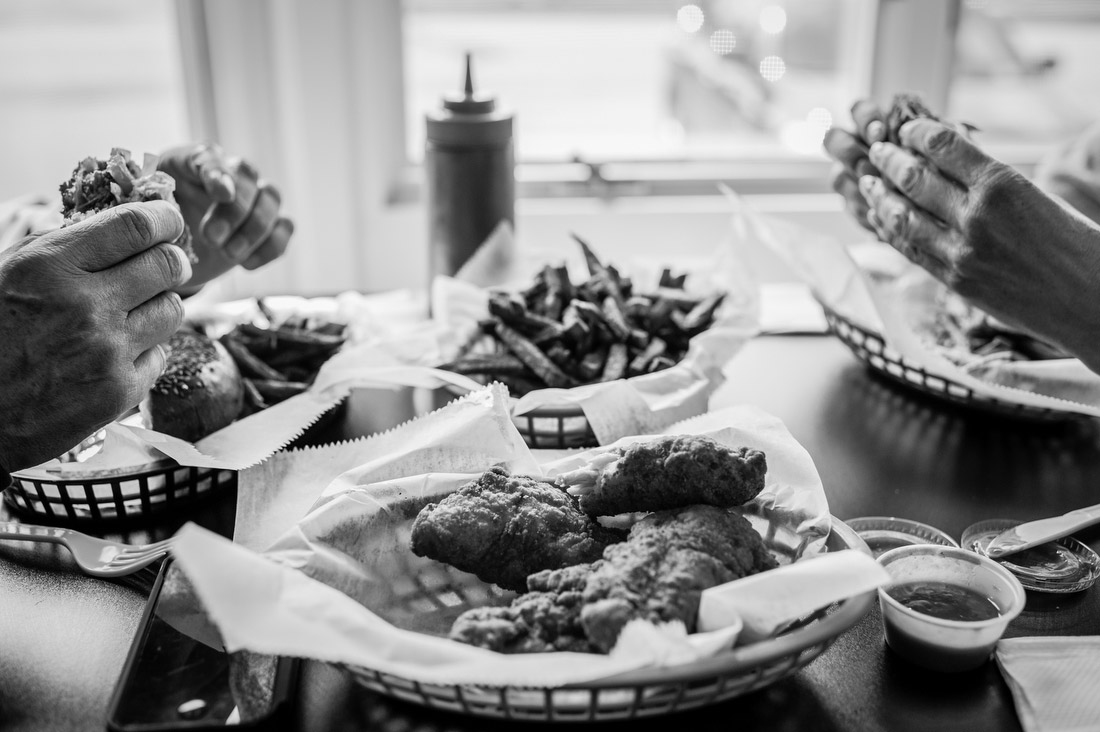 “Another benefit of caregiving at home was that we were in control of our own meals,” Nancy Borowick said. “When the doctor told my father that he needed to gain weight because he had lost 40 pounds overnight, he was like: ‘I don’t care what you eat. Just get the calories in.’ As a family, we kind of took those marching orders for all of us. We all ate fried food, and we all gained weight together in solidarity.” 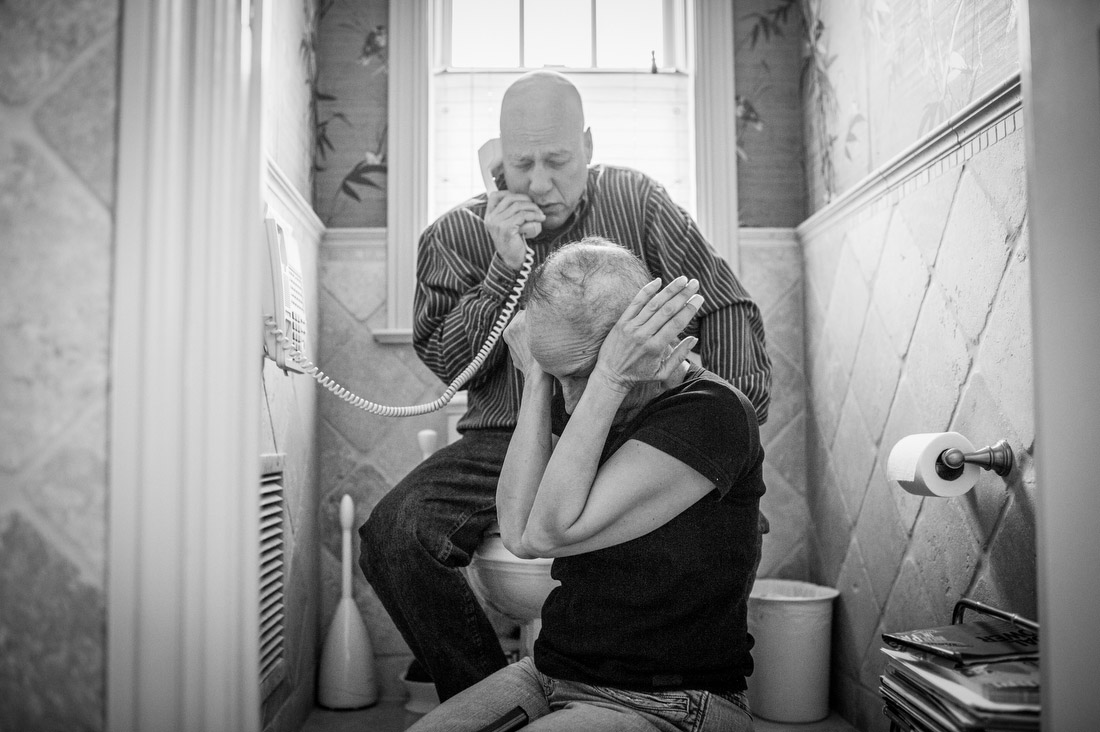 The Borowicks receive some welcome good news as they take a phone call in the bathroom. They were told at the time that their tumors were shrinking. 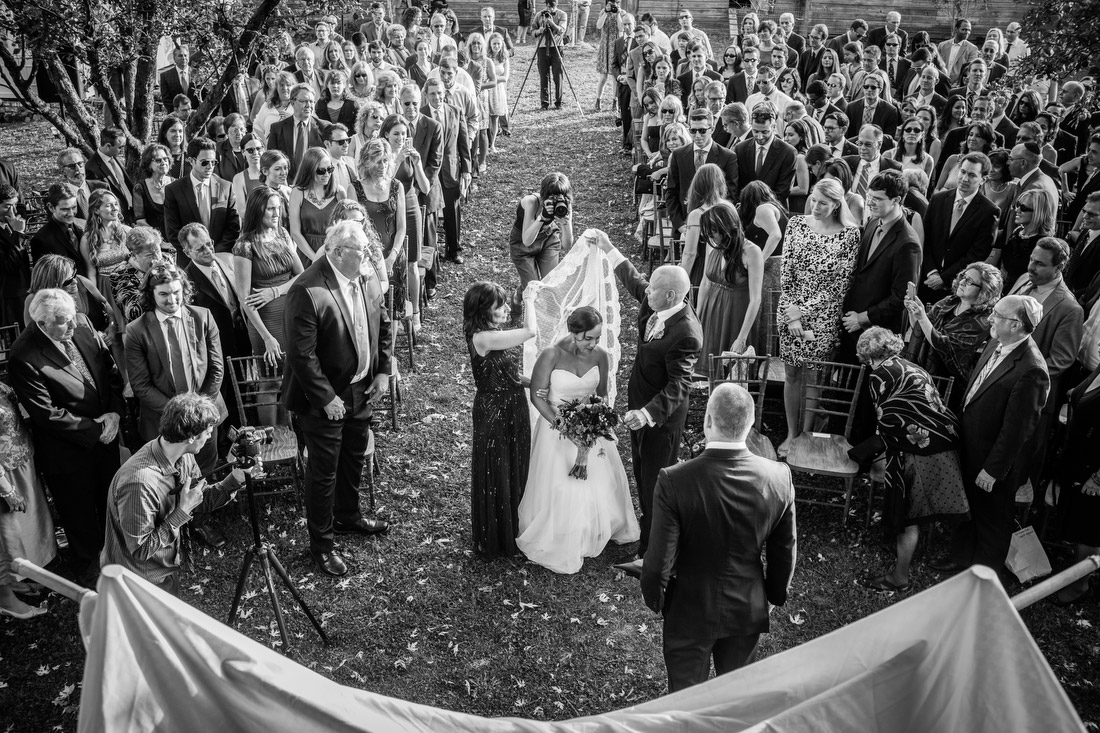 Nancy Borowick’s parents were able to escort her down the aisle at her wedding. 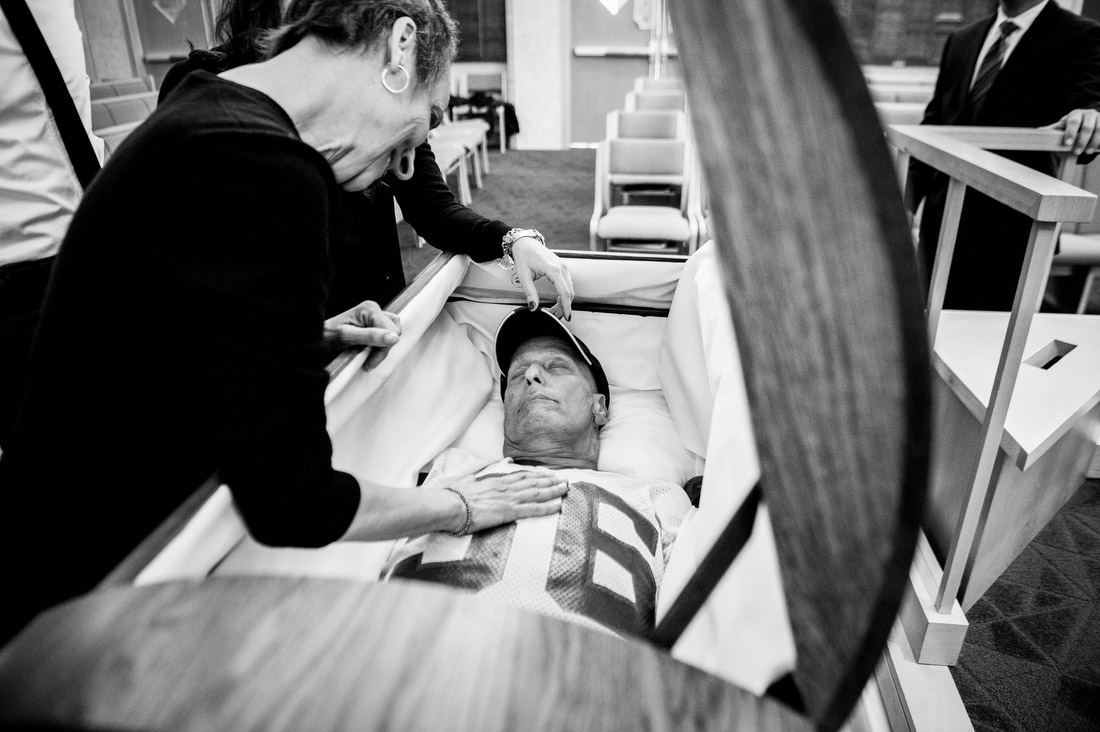 Howie Borowick wrote his own eulogy and planned his funeral, requesting that he be buried in his favorite New York Giants football jersey, his favorite jeans and his hat with the initials HB. 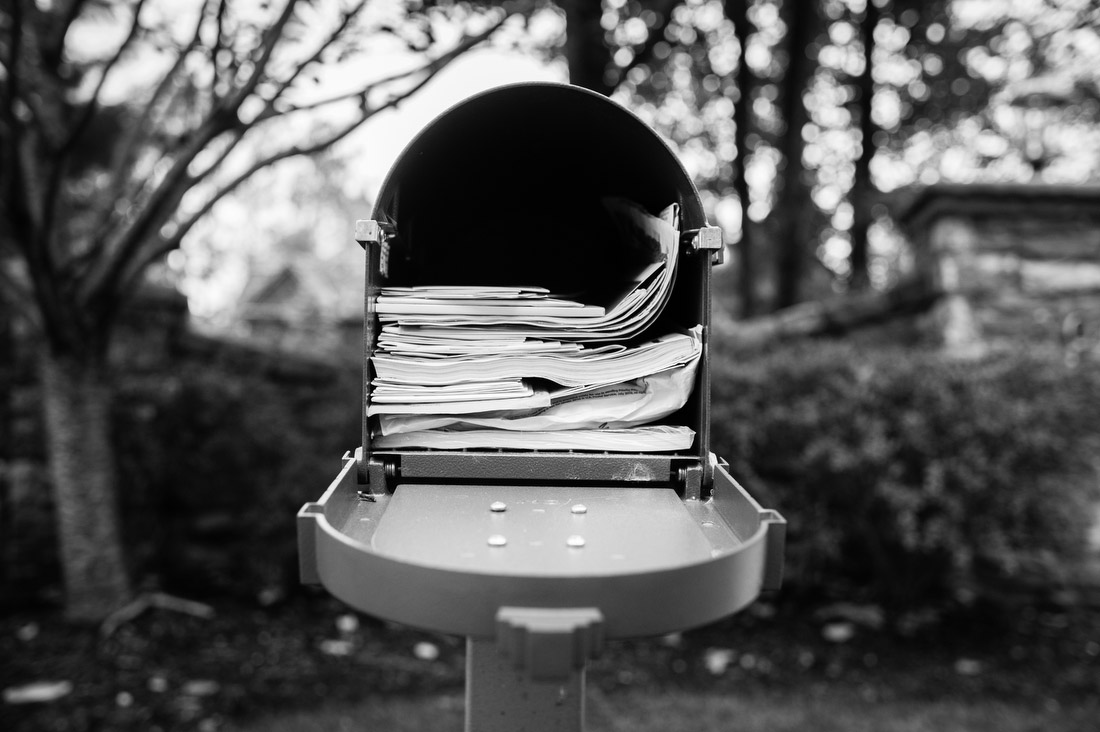 Laurel Borowick was a woman of lists and organization. The sight of mail piling up in the mailbox signaled to her daughter that something was wrong. 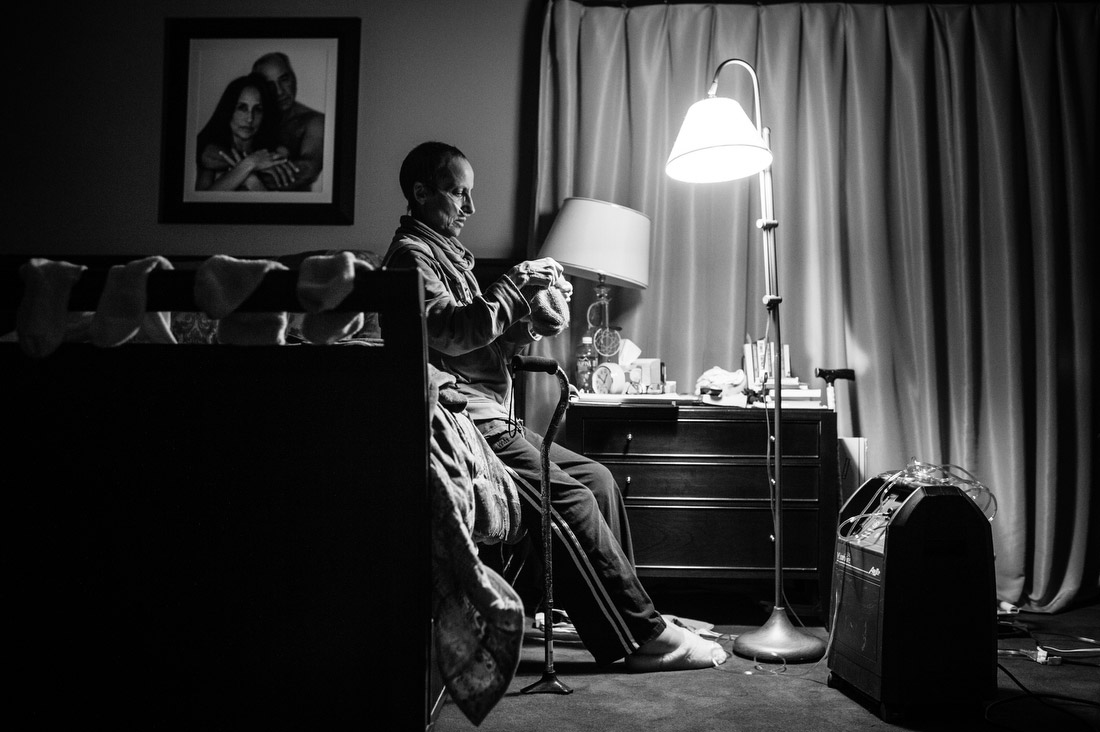 Laurel Borowick sits on the edge of her bed. “We were losing the rock that made this house a home,” her daughter recalled. 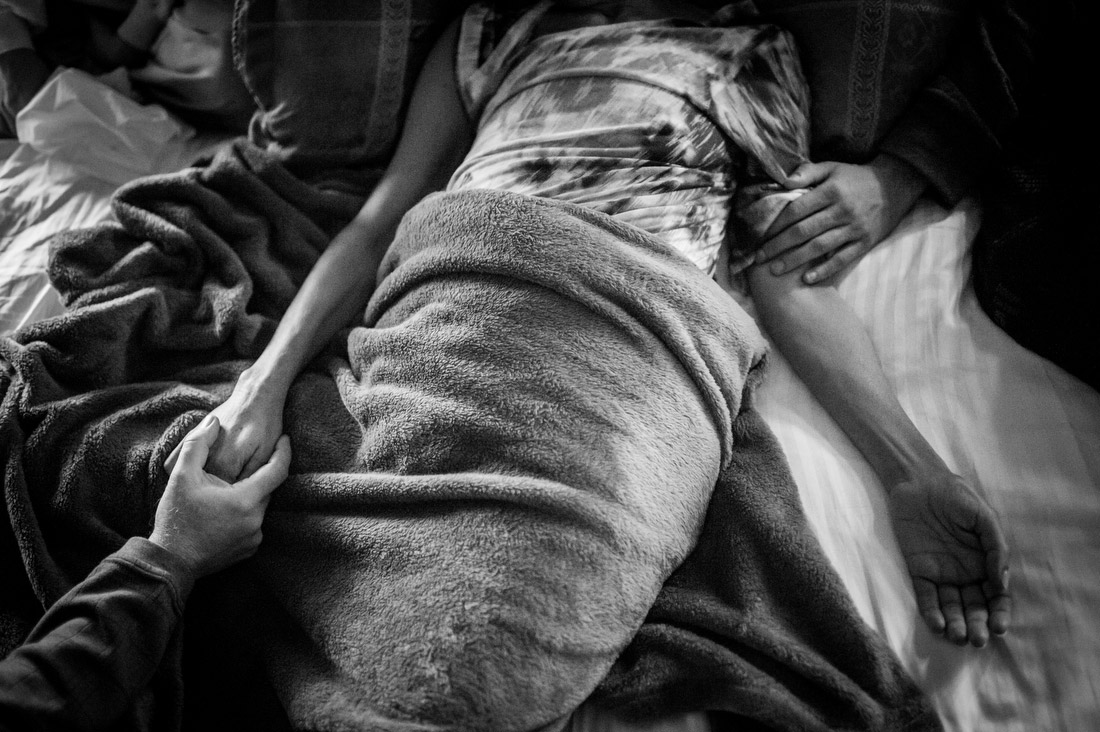 Laurel Borowick died in her bed, as she’d wanted, in December 2014. “My mom wasn’t scared of death,” Nancy Borowick said. “I think after having breast cancer for almost 18 years, you think about death, and maybe you come to terms with it.” 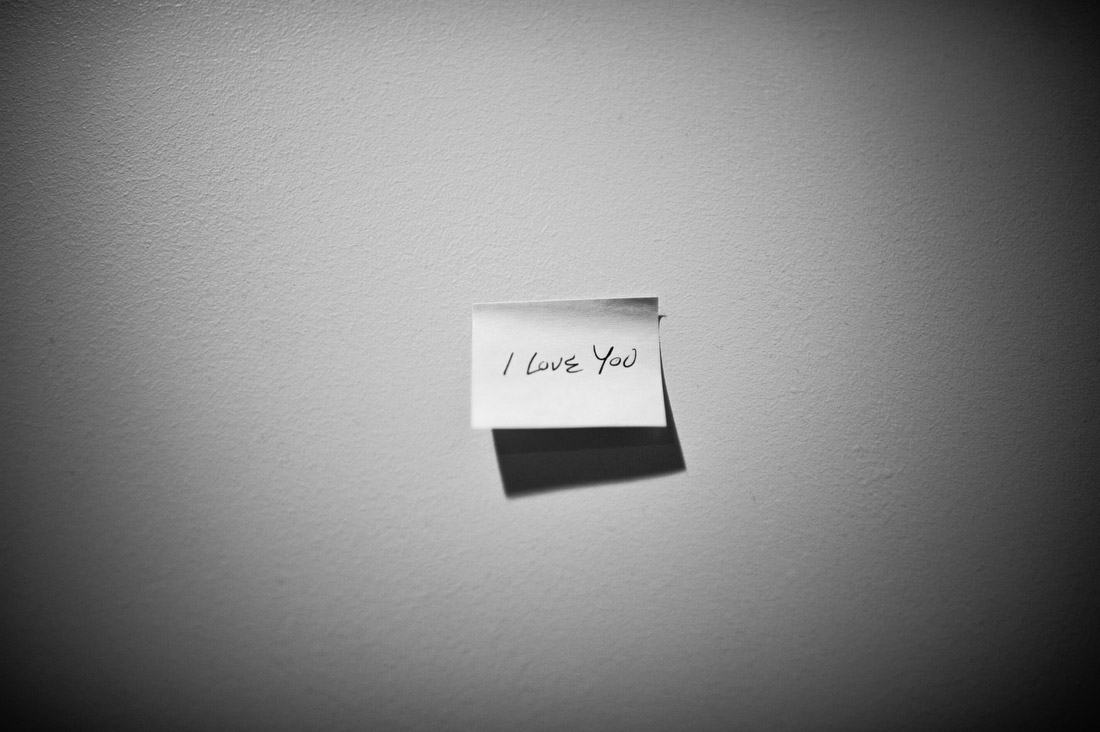 Howie Borowick left this note for his wife while they were in treatment. The story of her parents’ loving relationship is one of the gifts Nancy Borowick wants to share. “We’re not alone in this,” she said. “We can all relate in some capacity, and it’s important to support each other and help each other where we can.”