From fresh 'Debris' to 'Happy Endings'

It moves, it glows: Vhils' ode to the neon city

Portuguese street artist and urban sculptor Alexandre Farto, or as he’s more commonly known "Vhils," has found a fresh new canvas for his work: Hong Kong. For the past eight months, Vhils has been transforming Hong Kong's urban landscape, using hammer drills and chisels to cut portraits into public walls and advertisement hoardings.

“When I was growing up, I was a big fan of films. The Hong Kong of my imagination was influenced by (director) Wong Kar Wai. In his films, the neon and the lights were always present. So I tried to push work in that direction.”

In advance of Hong Kong Art Week, Vhils worked with local neon sign-makers, to bend his signature portraits of everyday people into fluorescent tubing. The neon works will debut as part of Vhils’ first solo exhibition in the city, "Debris," and is presented by the Hong Kong Contemporary Art (HOCA) Foundation. Read more information on the exhibition here. 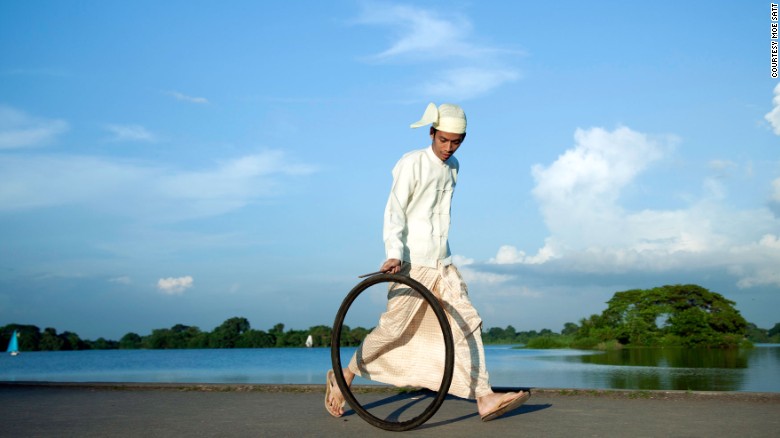 The market for Southeast Asian art is booming. This year Southeast Asian galleries will have a strong presence at Art Basel in Hong Kong. The reason, according to Emi Eu, director of the Singapore Tyler Print Institute, is due to the region’s unique artist vocabulary.

“Southeast Asian art is deeply rooted in culture, civilization, history, and is more narrative than it is conceptual and abstract," she explains.

"But it’s difficult to categorize. Auction houses often showcase art from Indonesia and the Philippines, works which are on oil and canvas. But artists on a whole are experimenting with new, non-traditional mediums.”

"Art from Southeast Asia is special because it’s art that is drawing from so many different civilizations. For people in Singapore, it’s southern China. For Indonesia, it’s influenced by their deep heritage of Japanese art. For the Philippines, it’s coming from Spain and America. Each country really has a different flavor.”

Pictured above, "Innya" by Burmese artist Moe Satt. The artist’s work will appear alongside 75 works from Vietnam, Myanmar, Cambodia and Thailand at the exhibition “Shapeshifting: Contemporary Art from Southeast Asia.” 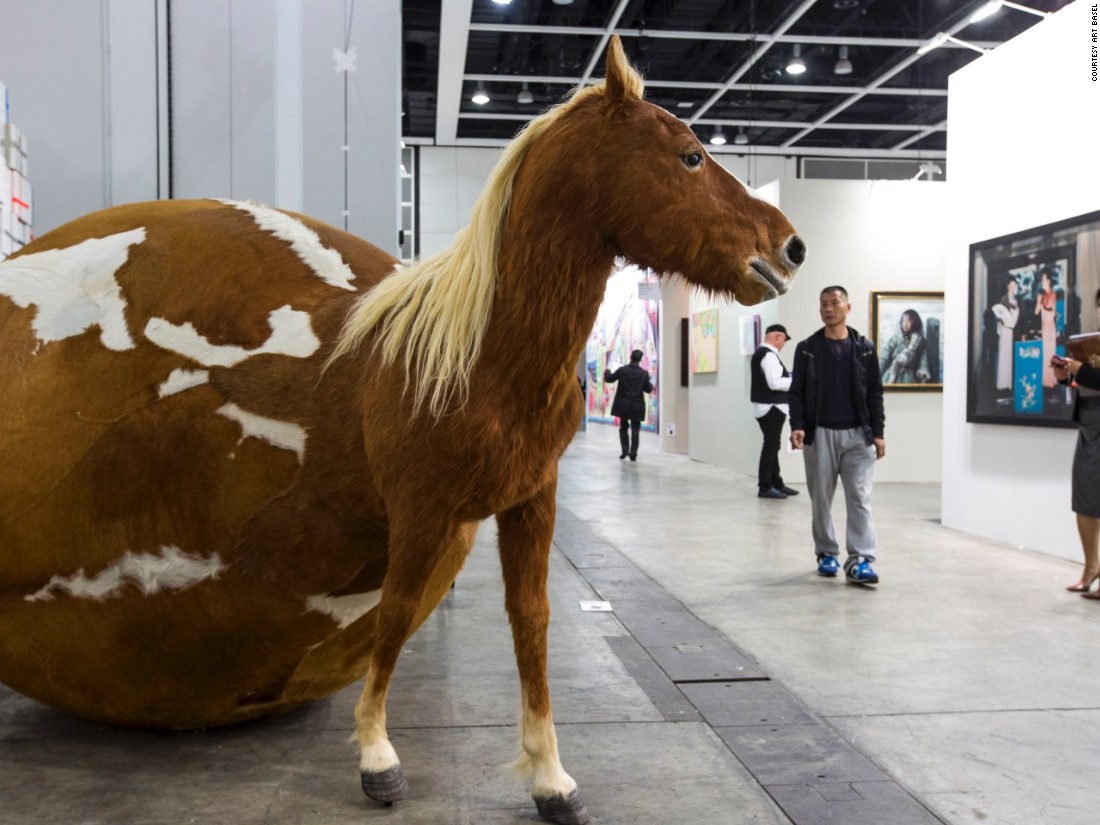 $2 MILLION spent on "Dead Monkey -- Sex, Money and Drugs," a painting by British Turner Prize-winner, Chris Ofili. The work was bought from David Zwiner Gallery in the first hour of Art Basel in Hong Kong 2015

$1 MILLION spent on "Die Fremde," an oil on canvas by German artist Neo Rauch. The work was bought from David Zwiner Gallery in the last few minutes of opening day, Art Basel in Hong Kong 2015

4,000 ARTISTS will have their work displayed at the fair

MORE THAN 60,000 PEOPLE are expected to attend this year’s Art Basel in Hong Kong

Pictured above, “Horse No 1” by Chinese artist Yang Maoyuan. 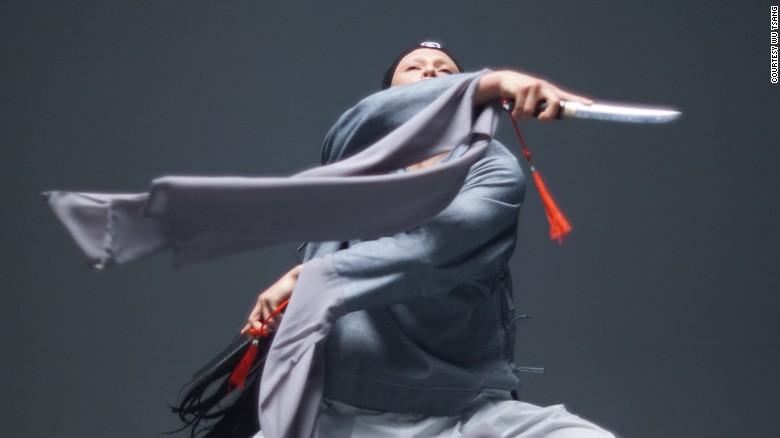 Best known for exploring themes of gender and cultural identity in her work, transgender artist Wu Tsang will premiere "Duilian"– a 30-minute film and exhibition that reinterprets the work of famed Chinese poet and feminist, Qiu Jin.

Wu, who has come to question the direction of the trans movement in the United States, believes working in Hong Kong has allowed her to participate in a different conversation about queer issues.

“I hope this film will provoke questions: what is the difference between love for an individual, versus love for a cause?” explains Wu.

The storyline focuses on the relationship between Qiu Jin and calligrapher Wu Zhiying, reinterpreting (or in Wu Tsang’s words, purposely ‘mistranslating’) Qiu Jin’s poetry to reveal what she believes to be hidden coded messages of intimacy between the two women.

“Qiu Jin’s poetry has inspired me to think of translation in general as a parallel process to queer desire. Poetry in particular is open to interpretation, and therefore translation becomes a process through which we discover what we want to see in others, or want to say about ourselves,” says Wu. 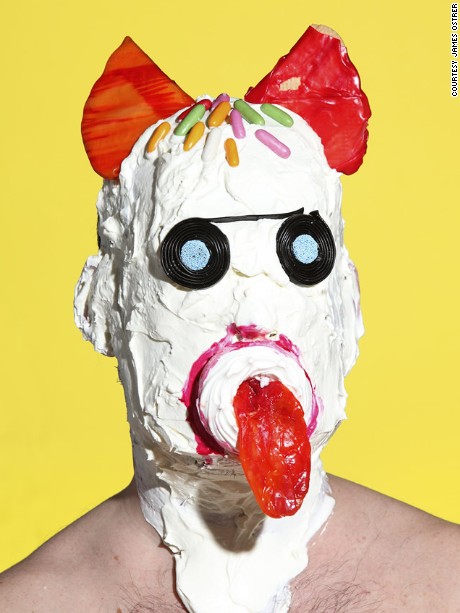 Together with Hong Kong’s “best mixologists,” he has also devised seven brightly-colored cocktails, a selection of which will be served at each bar.

“Art is a diverse range of human activities in creating visual, auditory or performing artifacts intended to be appreciated for their beauty or emotional power,” Guru Jimmy says. “When you drink Guru Jimmy’s 'Happy Ending' it feels like the perfect combination of all these things.”

But don’t be fooled by Guru Jimmy’s alcoholic magic. Although banal on the surface, this latest project is as provocative as ever, blatantly embracing the growing commercialization of art.

Make sure this kumquat flavored cocktail gets served with a large measure of irony.

HKWalls is an annual ‘pop-up’ festival which invites local and international artists to reinvent the city’s urban canvas.

This March, over 30 artists including the likes of Okuda, Peeta and Faust are to descend on Sham Shui Po district. They will cover the area in murals and street art, further adding to the city’s reputation as Asia’s graffiti capital.

Naked on the roof

Perched precariously atop the rooftops of Hong Kong's tallest skyscrapers, Antony Gormley’s 31 life-sized sculptures of naked men – known collectively as “Event Horizon” – represent the city’s largest public art installation-to-date. Spanning a kilometer area across the Central and Western districts, visitors to Art Basel in Hong Kong can search for the sculptures using this map. For more on the exhibition, see CNN Style’s exclusive interview with the British artist during his visit to Hong Kong here. 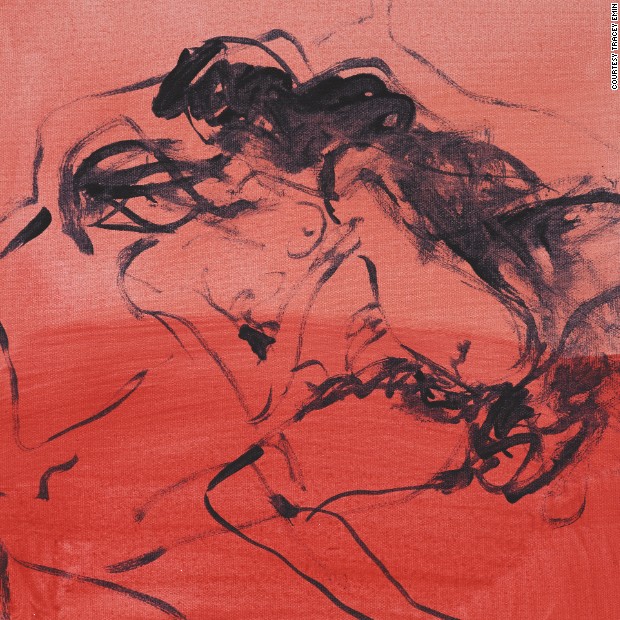 Expect to rub shoulders with celebrities and tycoon art collectors at Tracey Emin’s first solo show in greater China, “I Cried Because I Love You.” The major exhibition, being held across two galleries outside of Art Basel, features new pieces of the controversial British artist’s work, including nude paintings, embroidery, drawings and neon.

“I’m delighted Tracey is showing here because it’s always nice to be able to get a prominent artist to come along to make Art Basel more alive," he added. “I think Hong Kong people will love it.”

Those looking to buy, however, will need to have deep pockets. Although the galleries won’t reveal asking prices, one of Emin’s most famous pieces, the installation “My Bed,” sold for more than $4 million in 2014.

Tracey Emin’s "I Cried Because I love You" exhibition is being shown from 21 March to 21 May 2016 at Lehmann Maupin Hong Kong and White Cube Hong Kong.

Pictured above is "Hotter" by Tracey Emin. 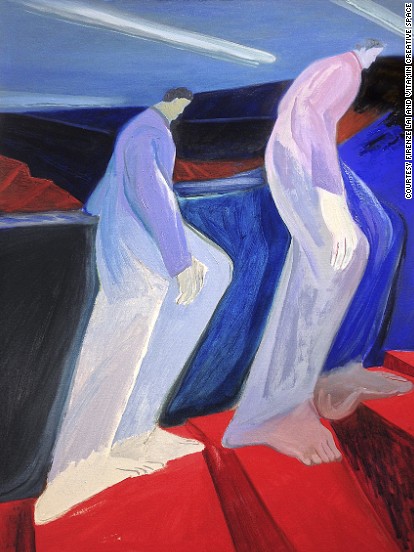 Behind Art Basel’s glitzy facade, is the altogether more serious business of collecting. Competition for new finds at Art Basel is fierce, and so too is the networking. So how does an art collector survive?

CNN Style asked billionaire entrepreneur and one of Hong Kong’s most prominent art collectors Adrian Cheng, for his top tips.

TIME IS PRECIOUS. In between his work and social commitments, Cheng says he crams as much art in as possible. “With all the show openings under my K11 Art Foundation and also the lunches and dinners…Art Basel Hong Kong is just too short!”

DO YOUR HOMEWORK. “For young collectors or first timers, always research the artists and their works before deciding to acquire a piece,” Cheng recommends.

USE YOUR HEAD AND YOUR GUT. “When I collect, I look at how the new piece is related to my current collection,” he says. “But you need to be connected to the piece, it has to mean something to you.”

DRESS DOWN BUT DRESS WELL. Cheng says he likes to “improvise” with his wardrobe. “I do not like wearing a tie though!”

HAVE AN OPEN MIND. “The fun part of the art fair is to visit new galleries and dig out potential young artists every year,” he says. “It is a journey of discovery.”

IT’S BEST NOT TO REST.  “Sleep less or do not sleep at all!” says the energetic Cheng. “Art Basel Hong Kong is more than an art fair, there are breakfasts, lunches, cocktails, dinners, parties, and even after parties for parties…”

BE PREPARED. “You get to meet the most interesting people from the art world in a just few days, so be prepared for a week-long battle!” adds Cheng. Pictured above is "One after Another" by Frienze Lai, a work that appears alongside 11 China-based artists in the exhibition HACK SPACE. 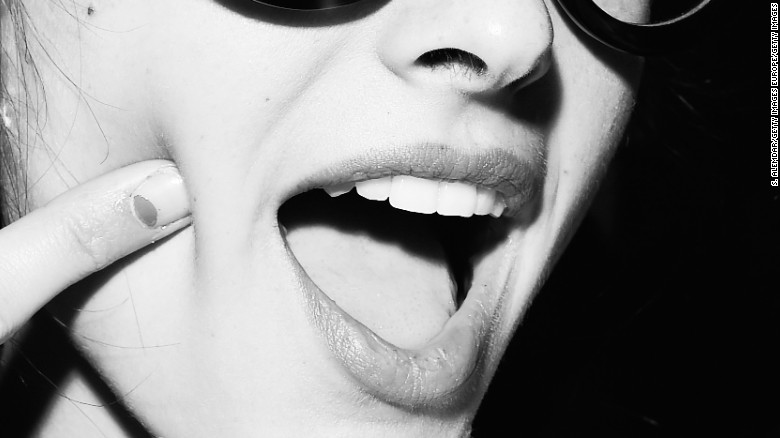 From the artist's mouth

“When I’m drawing, I can play…then when I’m painting, it’s like I’m scared and I don’t know what’s going to happen, as the painting takes over it becomes more exciting,” controversial British artist Tracey Emin has said. Find out more about her approach to art at Art Basel Real Talk | Tracey Emin .

“I want to capture and focus on moments of transference…to reveal the journey of dance-making and art-making, live in each performance.” Hear from the extraordinarily talented Chinese artist, dancer and choreographer, Shen Wei, at Talks X Asia Society: In Conversation with Shen Wei .

“Nobody is going to give you a hard time for being a somewhat conceptual artist who couldn't paint a realistic self-portrait, but music is coming to this sort of dynamic very late in the game,” young Hong Kong sound artist, Samson Young, has said of his unique approach. Hear more from Young as he chats with Japanese light artist, Tatsuo Miyajima at Art Basel Artist Talk | Tatsuyo Miyajima and Samson Young. 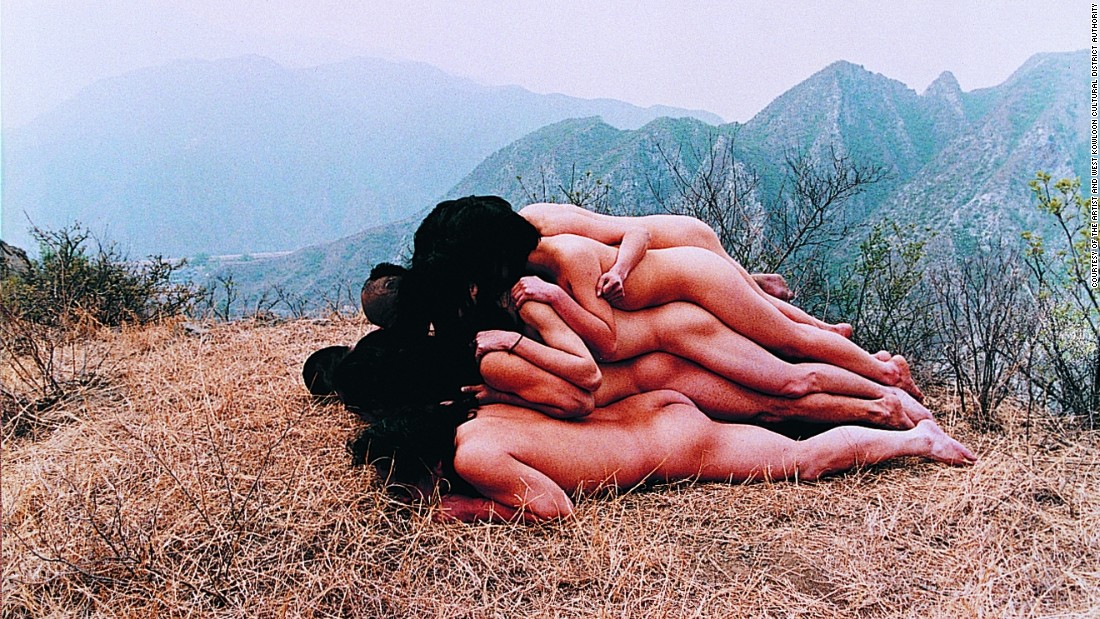 Before Ai Weiwei became a global celebrity, former Swiss ambassador to China, Uli Sigg, was quietly amassing the world's biggest collection of Chinese contemporary art. Beginning in the early 90s, Sigg met with over 2,000 of the country’s leading artists – many of which have gone on to become major names.

In an op-ed for CNN Style, Sigg discusses how his vast collection – which at its height contained some 2,300 works – reveals a unique side of the country’s ongoing political and social development.

In 2012, Sigg donated 1,510 of these works to M+, Hong Kong's new museum for visual culture. The exhibition M+ Sigg Collection Four Decades of Chinese Contemporary Art is a curated selection of these works, and runs at Artistree through May 4. Pictured above, “To add one meter to an anonymous mountain” by Chinese artist Zhang Huan.