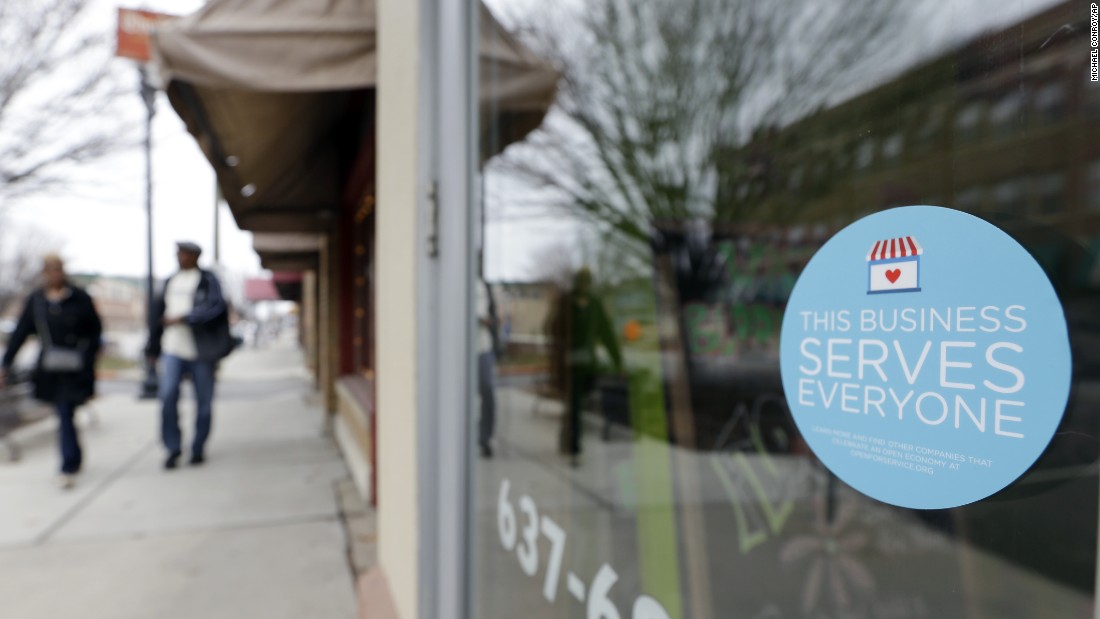 Editor's note: Sally Kohn is an activist, columnist and television commentator. Follow her on Twitter: @sallykohn. Mel Robbins is a CNN commentator, legal analyst and the CEO of Mel Robbins Enterprises, a management consulting firm. Follow her @melrobbins. The opinions expressed in this commentary are solely theirs.

Recently, Indiana passed a law that explicitly allowed private businesses to cite religion to deny service to certain customers. The law, which many saw as a veil for anti-gay discrimination, was then amended to bar discrimination based on sexual orientation and gender identity. Still, there's an active debate about whether a Christian owned-bakery should have to make a gay wedding cake, or whether a gay bar should have to host a Christian political rally.

This quiz presents nine hypotheticals and asks whether you think the discrimination each describes is legal or illegal — not your opinion on whether it should or shouldn't be, but what the law says. Of course, the laws are constantly shifting, and vary state-by-state — and in this quiz we haven't taken into account local ordinances that in real life might also affect each situation.

Public accommodation law generally provides: if you are a business providing services to the public, you must treat all customers equally, regardless of your beliefs. With that in mind, for each question, take your best guess. And then read a brief explanation that reflects the standing of state and federal laws as of April 7, 2015.

1. A restaurant in Nevada has a sign on its window, "No shirt, no shoes, no service." A person in a wheelchair comes into the restaurant with no shirt. The restaurant refuses him service.

LEGAL! A restaurant can refuse service based on a dress code, as long as it applies the same standard to every customer. The federal Constitution does not offer rights to those who wear shirts and those who don't. A local town may have an ordinance requiring you to wear a shirt to be served in a restaurant but that has nothing to do with discrimination laws. A restaurant could also, for instance, offer discount prices as a promotion to patrons wearing Red Sox jerseys — while charging fans without Red Sox jerseys regular prices. This is also not illegal discrimination, since those rooting for the Red Sox are not a legally protected class. "Ladies nights," on the other hand, are a contested category: Some jurisdictions treat them as discrimination against men and others do not.

2. Two African-American parents in Alabama rent the local town hall to throw their daughter a sweet 16 party. They invite the entire grade, except the Taiwanese students.

LEGAL! Personal discrimination in your private life is perfectly legal. You can choose who you want to associate with, who you want to be friends with, who you want to marry and who you don't, and you can make those decisions based solely on religion, skin color, nationality, gender, disabilities or sexual orientation. Personal discrimination in your social life is also legal. That means you can invite anyone you want to your parties and you can exclude whomever you want, even when the people you exclude are part of a "protected class" and even if your private party is in a building rented from the government. It's when you open a business and offer services to the public, or when you are a landlord or employer, that you must abide by anti-discrimination law, which requires you to treat each customer, tenant and employee by equally applied standards.

3. A kosher deli in New York, owned by a Jewish family, refuses to serve pork (which of course is not on the menu) to a Filipino customer. The deli turns the customer away.

LEGAL! The deli doesn't serve pork to anyone. The law does not require that you change your services or business practices to tailor to every single customer request; it requires that you serve every customer equally. Businesses are allowed to say customers can't make modifications to menu items. Now, if the deli had a famous Reuben sandwich and was refusing to sell it to the Filipino customer because of her national origin, that would be illegal discrimination.

4. A Middle Eastern Grill in Michigan, owned by a Muslim family, refuses to serve an Orthodox Jewish rabbi and his family.

ILLEGAL! You may not operate a store of any kind and refuse to serve customers because of their religion or because of your religion. Serving God isn't the same thing as serving a sandwich. Any business or government that provides general services to the general public, such as a bakery, pizza shop, florist or cabinet installer, is considered a public accommodation. The public accommodation rule basically states that you can only engage in business activity if you are willing to sell your product or service to anyone who meets the "equally applied standards" and is able and willing to pay. Customers who can pay are to be treated like any other customers. A so-called "Religious Freedom Restoration Act" is pending in the Michigan legislature, but even still, this discrimination violates public accommodation laws and is already illegal under existing state and federal law.

5. A person renting an apartment in Wisconsin is transitioning from male to female. When the landlord finds out, she kicks the tenant out.

6. A motel in Indiana owned by a Catholic family refuses to rent a room to an unmarried heterosexual couple.

LEGAL! Indiana recently passed a "Religious Freedom Restoration Act" that was different from such laws in other states or at the federal level in that the Indiana version explicitly included businesses. This led to much criticism that the law would allow businesses to discriminate against members of the lesbian, gay, bisexual and transgender community — which was arguably an excuse for anti-gay discrimination. After an uproar from pro-gay advocates and corporations, Indiana backed down and finally amended its law to make clear that the law could not be used to discriminate "on the basis of race, color, religion, ancestry, age, national origin, disability, sex, sexual orientation, gender identity, or United States military service." But the amendment does not include marital status. And Indiana does not have a statewide law prohibiting discrimination based on sexual orientation. So, unless this motel is in a city with a local ordinance that governs otherwise, it's perfectly legal for the motel to refuse to rent rooms to unmarried heterosexual couples and to gay couples.

7. A conservative public speaker refuses to give a paid speech to a pro-choice organization.

LEGAL! A conservative public speaker does not advertise himself or herself to the general public as being available to speak to anyone about any topic. The speaker is not offering general services to the public and is not a public accommodation and can refuse to speak to an organization that favors abortion rights. Conversely, an accountant, a doctor and a cake decorator do offer their services generally and are public accommodations. The doctor, accountant and cake decorator may not refuse services to customers based on religion, national origin, sexual orientation or other protected status. But what if in the course of offering "general services" a customer asks you to do something offensive? A cake baker in Colorado was asked to write an "offensive" anti-gay message on a cake. She declined but gave the customer the decorating stuff to do it himself. The customer went to the state's civil rights commission and it declined to take up the case. Refusing service because the customer's request is offensive is legal. Refusing business services because it violates your religion or you don't approve of their sexual orientation is not.

8. A pizza shop in Washington state is owned by a Mormon family. They refuse to cater a gay wedding.

ILLEGAL! Same-sex marriage is legal in Washington state and the state has laws that prohibit discrimination based on sexual orientation in public accommodations. But you might be thinking that having to cater a gay wedding is equivalent to a political statement supporting that wedding. Nope, no more than catering a Jewish wedding is a statement endorsing Judaism. But to refuse to provide a gay couple with the same pizza the shop provides for every other pizza'd wedding or other catered event—that's illegal discrimination.

9. A woman in Kansas is looking for a babysitter for her two children. Three people apply, two are completely unqualified but the third candidate is perfect. The mom's only problem is that the "perfect" babysitter is a lesbian and for that reason, she doesn't hire her.

LEGAL! Nondiscrimination laws do not apply to individuals or many small businesses (see, for example, here). Most state statutes require a minimum number of employees to be covered by the nondiscrimination law (typically six or 15, depending on the state) and federal law does not apply to this situation. Kansas had a law that protected public employees from discrimination based on sexual orientation or gender identity in government positions, but the governor removed those protections in 2014 via an executive order. If this was a state-run day care center in Kansas that didn't hire the candidate because she is a lesbian, that is now legal discrimination thanks to the governor of Kansas.