Michael Brown, an unarmed black teenager, was shot dead on August 9 by Darren Wilson, a white police officer. Some witnesses say the teenager assaulted the officer at the outset and tried to grab his gun; other witnesses say Wilson was the aggressor. All accounts agree that Brown ran and then turned back ... but to attack or surrender? Below is a timeline from both perspectives on what may have happened that afternoon.

All times are local CT. 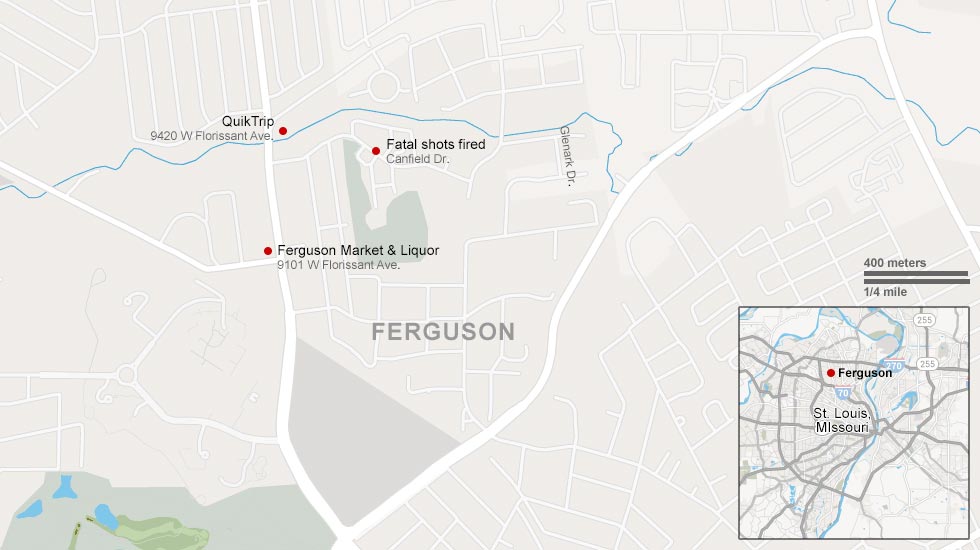 Officer Darren Wilson responds to a call of a sick person.

Dorian Johnson and Michael Brown go to Ferguson Market and Liquor. Surveillance video captures a man pushing a clerk before walking out of the store with a box of cigarillos.

Johnson's attorney, Freeman Bosley, confirms Johnson and Brown were there.

"My client, Dorian Johnson, he [told investigators about] the situation involving Big Mike taking the cigarillos. This is not a theft, it's more of a shoplifting situation."

Someone at Ferguson Market and Liquor, a convenience store at 9101 W. Florissant Avenue, places a 911 call.

The next minute a dispatcher gives a description of a suspect over radio. A different officer arrives at the store where the alleged strong-arm robbery occurred.

The dispatcher relays information from a witness that the suspect is walking toward the QuikTrip at 9420 W. Florissant Ave.

Brown, 18, and Johnson, 22, are walking in the middle of the street, heading, Johnson says, to Johnson's house, when a Ferguson police officer confronts them.

The officer tells the young men either "Get the f*** on the sidewalk" or "Get the f*** out of the street," according to Johnson's accounts to CNN and other news outlets.

The young men reply that they are "not but a minute away from our destination, and we would shortly be out of the street," Johnson told CNN.

Wilson leaves the scene of the sick call and encounters Michael Brown and Dorian Johnson on Canfield Drive.

"Josie," a purported friend of the family, relays what she says Wilson's "significant other" told her about what he said happened next. The account matches what Wilson has told investigators, a source tells CNN.

Josie: "They were walking in the middle of the street. He rolled his window down and said, 'Come on guys. Get out of the street.' They refused to and were yelling back, saying we're almost where we're going and there was some cussing involved."

Ferguson Police Chief Thomas Jackson also said Wilson approached Brown because he was "walking down the middle of the street, blocking traffic."

The officer drives away but then puts the car in reverse and backs up rapidly. The car slants, almost hitting Johnson and Brown, Johnson tells CNN.

"We were so close, almost inches away, that when he tried to open his door aggressively, the door ricocheted both off me and Big Mike's body and closed back on the officer," Johnson said.

Still in his car, the officer grabs Brown by his neck, Johnson said. Brown tries to pull away, but the officer keeps pulling Brown toward him, he said.

Johnson: "My friend, Big Mike, very angrily is trying to pull away from the officer."

The officer draws his weapon. He says "'I'll shoot" or "I'm about to shoot." "I'm standing so close to Big Mike and the officer, I look in his window and I see that he has his gun pointed at both of us. And when he fired his weapon, I moved seconds before he pulled the trigger. I saw the fire come out the barrel and I instinctually knew it was a gun. I looked at my friend Big Mike and saw he was struck in the chest or upper region because I saw blood spatter down his side."

Johnson: "At no point in time did they struggle over the weapon because the weapon was already drawn on us."

Bosley says Brown still has the cigarillos taken from the store in his hand so he was trying to maneuver himself away from the officer.

Piaget Crenshaw, Mitchell's co-worker, said she saw what happened from her apartment while waiting for Mitchell: "The officer was just trying to pull him into the vehicle – that's just what it looked like."

Josie: "So he goes in reverse back to them. He tries to get out of his car. They slam his door shut violently. I think he said Michael [Brown] did. Then he opens his car again and tries to get out and as he stands up Michael just bum rushes him, and just shoves him back into his car, punches him in the face and then of course Darren grabs for his gun and Michael grabs the gun. At one point he's got the gun totally turned against his hip and then he shoves it away and the gun goes off."

"The genesis of this was a physical confrontation," St. Louis County Police Chief Jon Belmar said.

Wilson tries to exit his vehicle but Brown pushes him back into the car, according to the preliminary investigation, Belmar said.

Brown physically assaults the police officer and there is a struggle over the officer's gun, Belmar said.

A shot is fired inside the police car.

Brown's wounds included a shot to the hand from close range, the official autopsy found, according to a report in the St. Louis Post-Dispatch newspaper, the source of which was confirmed as genuine to CNN by a county official.

At least one of the wounds and the blood could be consistent with a struggle at the police car.

Johnson and a bloodied Brown take off running. Johnson hides behind the first car he sees, according to Johnson's account. The officer gets out of his car.

"And at that time, he turned around with his hands up, beginning to tell the officer that he was unarmed and to tell him to stop shooting. But at that time, the officer fired several more shots into my friend, and he hit the ground and died."

Bosley, Johnson's attorney, later clarifies that Brown's hands were above his shoulders.

"The cop gets out of his vehicle shooting," Mitchell said. "(Brown's) body jerked as if he was hit from behind, and he turned around, and he put his hands up. ... The cop continued to fire until he just dropped down to the ground, and his face just smacks the concrete."

Crenshaw: "He started chasing after the boy. I'm hearing shots fired ... one did graze him. ... At the end he just turned around ... and then was shot multiple times."

"He was running for his life and just got shot and turned around and didn't try to reach for anything. He put his hands in the air being compliant and he still got shot down like a dog."

Michael Brady says he saw the end of the confrontation: "By the time I gets outside, he's already turned around, facing the officer. He's balled up, he had his arms under his stomach and he was halfway down, like he was going down, and the officer lets out three or four shots at him." 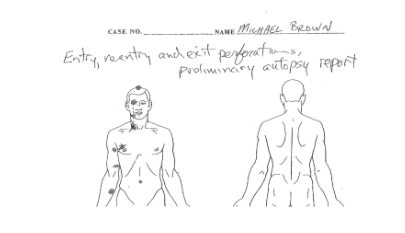 A diagram from a second autopsy commissioned by the family shows entry and exit wounds.

Josie: "Michael takes off with his friend. They get to be about 35 feet away and Darren [Wilson], of course protocol is to pursue. So he stands up and yells, ‘Freeze!' Michael and his friend turn around and Michael starts taunting him. ‘Oh, what are you going to do about it? You're not gonna shoot me.'

How many times did Officer Wilson shoot?

Jackson, Ferguson police chief, said Wilson was taken to a local hospital and treated for a swollen face.

At least six bullets hit Michael Brown, including a fatal shot to the head, the family's autopsy shows.

One bullet entered the top of Brown's head.

— Where are all the bullets? (Only three were recovered from Brown's body.)

— Were other shots fired that missed Brown?

— What evidence is in the police car? Was a shot fired in the car, as law enforcement officials say?

— What evidence is on Brown’s clothes? They were not provided to the family pathologist, but the presence or lack of gunshot residue could indicate from how far away the shots were fired. The clothes could also show evidence of any confrontation between Brown and Wilson.

5 things to know about the shooting

Who was Michael Brown?

What we know about Ferguson