Even people who aren't in the line of fire in Iraq feel the effects of the chaos that has engulfed the country since extremists attacked weeks ago. That's clear from a trip to a market in central Baghdad. Shoppers suddenly pay more for water and fish. They finger tomatoes and cucumbers that are just a bit too ripe. And a baker isn't selling nearly as much sweet bread as he did just weeks ago. The merchants are open for business – at least for now - but the turmoil clearly has altered the rhythms of everyday life.

Nidal Hussain clutches a shopping bag as she crosses the four-lane street, weaving through cars and trucks that inch along a main thoroughfare in central Baghdad.

It's late morning under a sweltering sun, and Hussain has joined men, women and children walking to a market where canopied stalls line sidewalks and sometimes spill into the street. It's part of her near daily ritual of buying fresh bread, vegetables, fruits and fish to feed her family.

She steps over broken concrete and puddles of fetid water to get to the Karrada market, named for the central Baghdad neighborhood where it sits.

"Shetreed," a vegetable seller asks Hussain. What do you want? 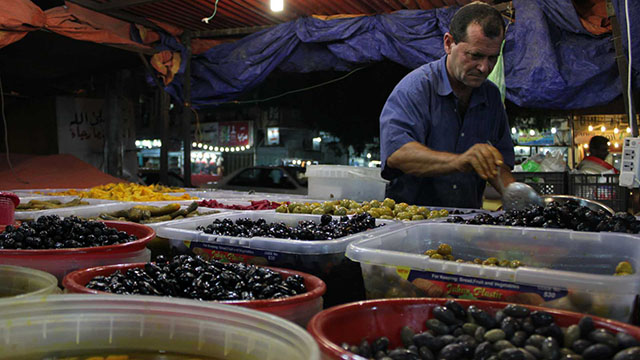 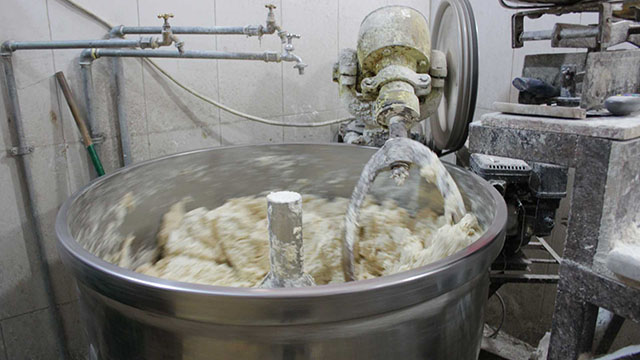 She inspects a tomato from a green plastic crate, puts it back and chooses another.

Some of these are not that good, she says.

What do you expect with all the trouble? he says.

The trouble, that's what vegetable seller Abu Jaafar calls the crisis that suddenly has engulfed Iraq.

In just the last month, large swaths of Iraq have been overrun by militants so vicious they crucify and behead people and then brag about it online. They have imposed a strict version of Islamic law on tens of thousands of Iraqis.

The fiercest fighting has unfolded in the north and west of Iraq, but the militants have vowed to strike the capital farther south, too. Their violent ascent – and the government's counterattack – have altered the rhythms of everyday life for millions of people around Iraq, even those not directly in the line of fire.

Look a little closer at the market, listen to the conversations and you can see it.

It's in the quality of food: Tomatoes, cucumbers and onions that have sat out one day too long. 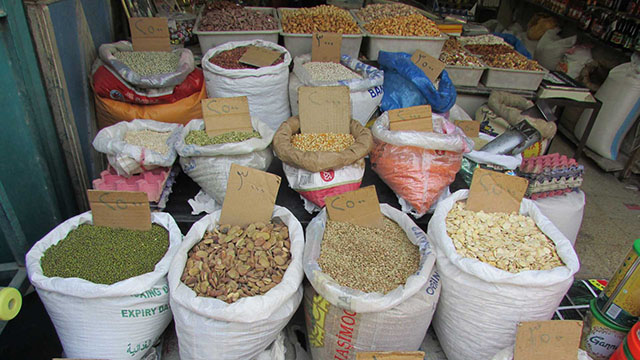 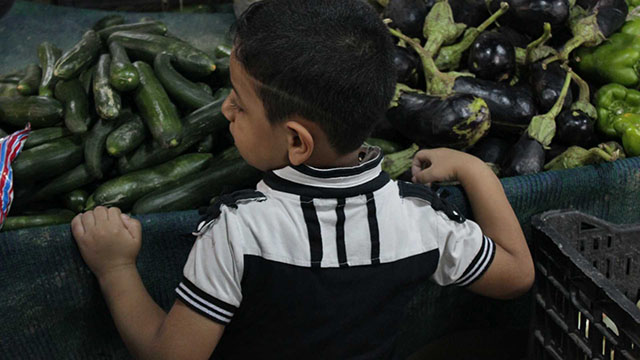 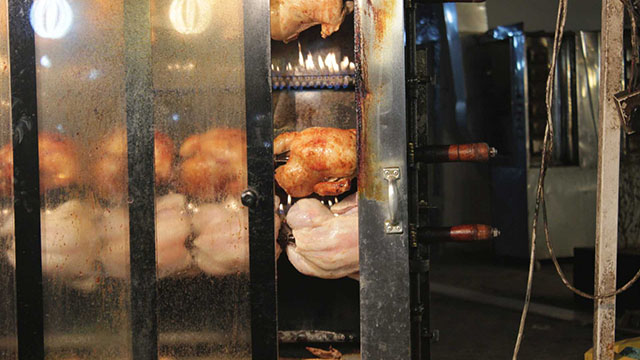 It's in the prices, where the price of bottled water has doubled in the last few weeks, to the equivalent of about 40 cents for eight ounces.

It's in the number of people at the market, where once daily trips have been reduced to a couple of times a week.

Harder to quantify but just as real is an anxious uncertainty that keeps some customers from the market.

"This is bad," says Thair Hadi, a giant of a man with an even bigger laugh who hawks sweet bread on a busy corner of the market. "It's bad for people. It's bad for business. It's bad for the country."

Since the trouble began, he says, he sees fewer familiar faces. Even his popular cookies don't sell like they did a month ago. 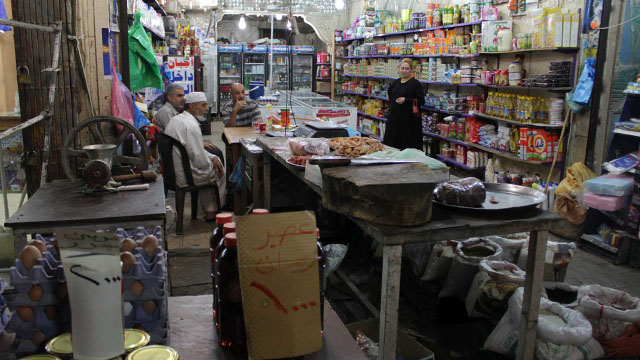 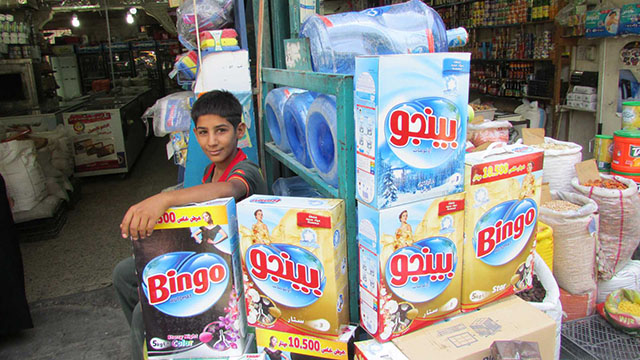 Hadi says his business has fallen 40% since the Islamic State of Iraq and Syria swept into Iraq. Led by Sunni Muslims, a minority in Iraq, the group has targeted rival Shiites, who make up the majority and wield the most power in Iraq. The fighting has the potential to tear the country apart, pitting Sunni against Shiite, neighbor against neighbor.

Some of Hadi's customers already have fled for the safety of Iraq's Shiite heartland. Others have left Iraq altogether.

Those who do come notice changes.

A short walk from Hadi's tray of baked goods, a woman argues with a fish seller over the price for carp, which swim in what looks like a shallow swimming pool on the sidewalk. 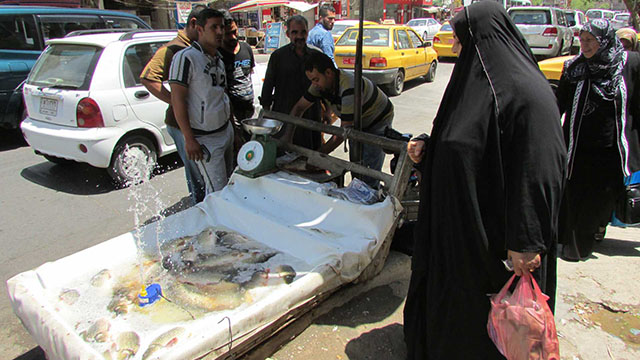 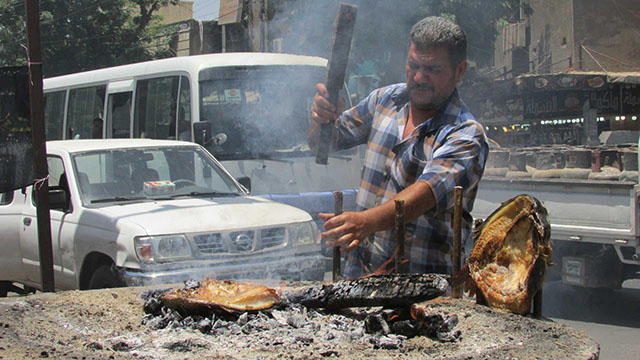 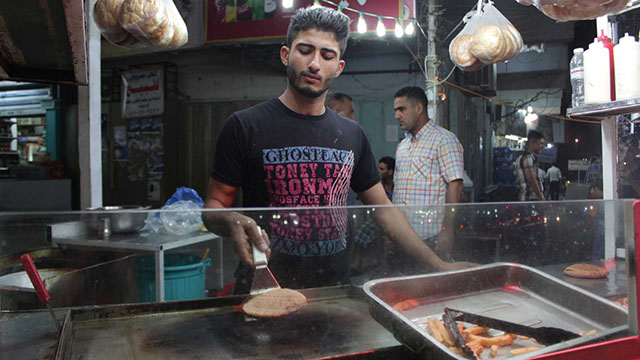 Um Zahra questions why the price has gone up.

The fish seller blames it on the disruption to the fishing industry caused by Daish, a derogatory reference to the Islamic State of Iraq and Syria, which recently rebranded itself simply as the Islamic State.

"With your prices, you must belong to Daish," she says.

That dark humor speaks to the tension gripping Baghdad.

The city of more than 7 million – second-largest in the Middle East behind Cairo -- is no stranger to violence.

It has survived centuries of attacks, from the Mongol invasion in 1258 that nearly destroyed it to the 2003 U.S.-led invasion and nearly nine years of war that followed.

Over the years, the neighborhood that is home to the market has been hit by mortars, bombs and gunfights. It sits just across the Tigris River from the Green Zone, a 6-square-mile fortress that is home to Iraq's central government and foreign missions such as the U.S. Embassy.

Few people have been immune to the violence.

Hussain – the woman who frowned at the quality of tomatoes at the market – knows that as well as anyone. Behind her tight smile is a sadness that transcends barriers of language.

Just a few blocks from the market, along one of the narrow streets that snake through the heart of the city, an explosion killed her husband in 2004. Her son lost a leg.

This is life, Hussain says, almost resigned to the attacks that have long since earned Baghdad the moniker "the most dangerous city in the world." Now there is fear of even more carnage.

She admits anxiety about venturing out from her home but says she has no choice.

"I have a family I must feed," Hussain says.

She waits her turn to buy bread at Hadi's stall.

"Shigad treed," the baker says. How much do you want?

Two kilos, she says. Enough for a few days.

Iraq to split in three: So why not?

Joe Biden once argued it was time to split Iraq into three parts: Kurdish, Shia and Sunni. And why not?

In a palm orchard in Baghdad, women learn how to protect their children and homes, fearing they'll be left vulnerable if ISIS penetrates the Iraqi capital.

Iraq's orphans left to ask: 'Why?'

'Why do these people kill other people?" For Iraq's youngest residents, the tragedy in the country is almost incompreensible.

ISIS has spread from Syria into Iraq. Learn where the militant strongholds are.