Two inches of chaos: What Atlanta's leaders were doing while the snow fell

Who's to blame for the chaos that brought Atlanta to a halt after a snowstorm? CNN’s Anderson Cooper takes a look.

How did one of America's largest cities -- one famous as a transportation hub since its infancy -- turn into a scene of epic gridlock with just two inches of snow? CNN takes a look at what happened and how officials responded.

The National Weather Service adds metro Atlanta to a winter storm watch that had been issued Sunday afternoon, projecting up to two inches of snow. "Snow is expected to begin as early as midmorning Tuesday and last into Tuesday night," the watch states. It's not the first time snow has been predicted in Atlanta – and many transplants in the city scoff at Southerners' fears of impending doom.

"Everyone keeps trying to tell me how bad the weather is going to be but I keep saying if the weather was going to be bad, Charley would have called and he hasn’t called me," Riley wrote in an email to English obtained by CNN.

The winter storm watch is updated to a warning. Issued for counties in the southern part of metro Atlanta, meteorologists predict a "wintry mix" of snow and sleet will fall through Tuesday evening. "Snow and ice covered roads will make travel difficult or impossible beginning Tuesday afternoon into Wednesday," they warn.

Atlanta and its suburbs are placed under a winter storm warning effective at 9 a.m. "Significant amounts of snow are forecast that will make travel dangerous," the warning states.

Good Morning: Atlanta is now in the Winter Storm Warning area. 1 to 3" possible. North of the city 1/2 to an inch. #news #gawx #weather

Schools in the area elect to remain open for the day. "Many school districts receive federal or state aid for every day the student is in a class. So cancel a day of school, you may cost a school district millions of dollars," Texas A&M professor David McIntyre later explains on CNN. "That's not a decision to be taken lightly."

Commuters head into work on Tuesday morning after raiding grocery stores for bread and milk the night before. Traffic is bad – but that’s normal during rush hour for a city that relies primarily on cars for transportation.

Charley English, director of the Georgia Emergency Management Agency, speaks with Gov. Deal on the phone about the seriousness of the situation around metro Atlanta. The governor was "told that further action was not necessary."

English later admits, "I got this one wrong. I made the decision not to do anything until later that morning."

In a press release, the Department of Public Works says it will work to ensure priority roadways are clear and passable. The city has 30 spreaders with 700 tons of a sand/gravel mix, and 40 snow plows "ready for mobilization."

Atlanta, we are ready for the snow. For useful numbers and information, make sure you read our press release: http://t.co/wogjK34YjT 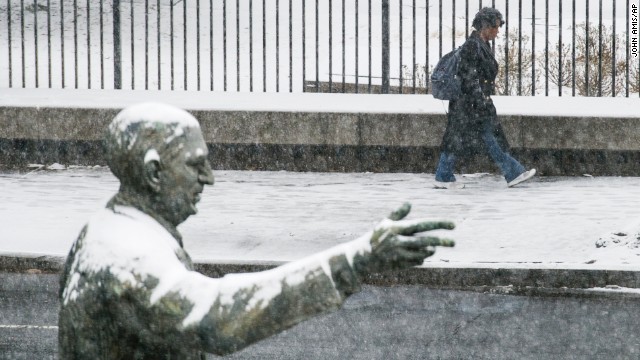 A pedestrian walks by the snow-covered statue of late Georgia Gov. and U.S. Sen. Richard B. Russell as she makes her way past the state capitol while snow begins to accumulate Tuesday afternoon.

By this time, Delta has already cancelled 840 Atlanta flights scheduled to fly into or out of Hartsfield-Jackson Atlanta International Airport over the next several hours.

School administrators re-check the weather forecast and start to announce early dismissals. Parents ask their bosses if they, too, can leave a little early as the snow moves from northwest Atlanta into downtown.

Today’s weather pattern has come in faster than initially forecasted. The school day will be ending at 1:45 p.m.... http://t.co/BGgI3aS0K6 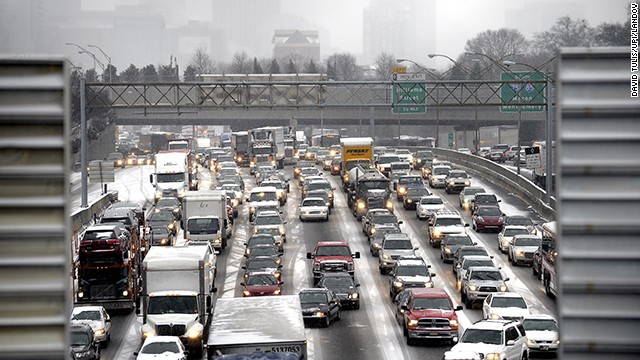 As thousands of Atlanta residents jump in their cars and start going nowhere, Mayor Reed accepts the 2014 Georgian Of The Year award from GeorgiaTrend Magazine. Gov. Deal is there to congratulate him.

Among Reed's many credentials? He chairs the Transportation and Communications Committee of the U.S. Conference of Mayors.

I was honored to introduced Mayor @KasimReed as he was named 2014 Georgian of the Year. Congratulations. -ND #gapol pic.twitter.com/GjLfogbRno

The city of Atlanta issues a statement on its website, saying it has mobilized a Joint Operations Center to respond to operational issues throughout the city.

"With icy road conditions expected until late Wednesday evening, Mayor Reed encourages residents to stay off the roads," the website says. "If driving is unavoidable, please use extra care."

In under an hour, traffic in Atlanta is gridlocked.

"I don't think I’ve ever seen total gridlock like this," tweets Ross Cavitt, a reporter for CNN affilliate WSB.

I don't think I've ever seen total gridlock like this. #wsbtv #StormWatchOn2 pic.twitter.com/jucLMKGwdw

GEMA director English acknowledges the huge challenge of treating slick roads when they are covered by so many slow-moving or stalled vehicles.

"I don't see how we are going to get rid of the ice with such low temps predicted," English wrote in an e-mail obtained by CNN. "Too many cars out there now to make a lot of progress."

The Georgia National Guard works tirelessly to rescue children trapped on school buses, assist drivers who have slid off the road and pass out food and water to stranded motorists.

Reed tells CNN affiliate WSB that the city has much more capability to clear streets since the ice storm that paralyzed the city in 2011, but added, "The next 24 hours, I really need folks to stay home."

According to the Atlanta Journal-Constitution, Mayor Reed and a handful of his staffers use police escorts and emergency lanes to bypass thousands of motorists on their way to an interview with The Weather Channel, located near the intersection of I-75 and I-285.

A baby girl named Grace, as in "By the Grace of God," is born to Nick and Amy Anderson on the side of I-285 with the help of one of Atlanta’s finest. The Andersons got stuck in traffic and couldn’t make the normally 15-minute drive to the hospital.

Just got this picture from the family of baby girl born on 285 yesterday. "Grace," as in by "Grace of God." #wsbtv. pic.twitter.com/KV9OLQEhXn

The sun sets, and the temperature hovers around 21 degrees.

Stores and gas stations around the city start taking in people who have abandoned their cars to seek shelter. Others report walking more than 5 miles to get home. Students are stuck at school and in buses still on the road. Many will remain wherever they are overnight.

Deal declares a state of emergency, committing state police and the National Guard to help clear the roads.

WSB reports that the Georgia State Patrol has been called to investigate 940 traffic crashes with 104 injuries over the last 13 hours.

Since 10 a.m., Georgia State Patrol has been called to investigate 940 traffic crashes, including 104 injuries. #stormwatchon2

Deal tells reporters the storm and traffic jam "became so heavy in such a short time frame" that the state was unable to keep roads moving. He promises, "There are going to be a lot of people spending a lot of long hours in the cold tonight trying to get things better by in the morning."

He also says the storm was "unexpected," which makes a few meteorologists question whether anyone ever listens to them.

Those who made it home the night before stay there. Unfortunately, many Atlanta residents are still stuck on the road. Local news stations show aerial photos of tractor trailers jackknifed across several highways, making them impassable. Cars stretch for miles – many abandoned, some with motorists still inside. But the sun is out and many are optimistic that will help melt the ice.

The governor declares Georgia closed for the day.

Goal is to assist every motorist still on the roads by nightfall. We ask those who've left vehicles to wait until tmrw to retrieve them. 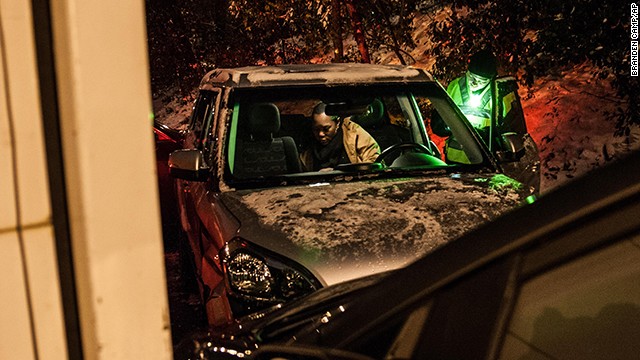 A police officer talks with a crash victim who was involved in a five-car pileup early Wednesday in Sandy Springs, Georgia.

At a press conference on Wednesday, the governor and mayor try to explain what happened – and why.

"We made a mistake by not staggering when people should leave. So I'll take responsibility for that," Reed said, noting that they should have told students to go home first, followed by private businesses and then government employees.

"The National Weather Service continually had their modeling showing that the city of Atlanta would not be the primary area where the storm would hit, that it would be south of Atlanta," Deal said. "They thought there were going to be other parts of the state that were going to be more severely impacted than the metropolitan Atlanta area."

How 2 inches of snow froze a city

Was Atlanta asleep at the wheel?