How the Christie scandal unfolded 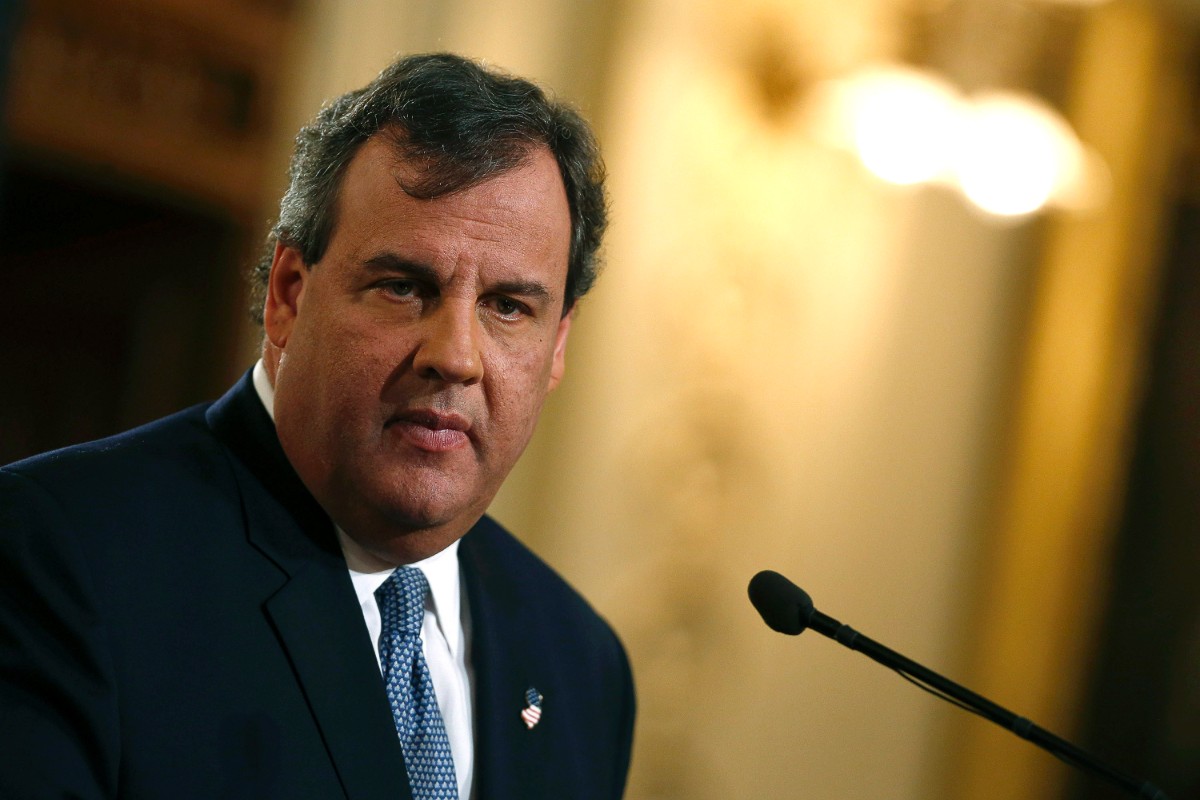 It started with a massive traffic jam at the New Jersey entrance to the George Washington Bridge and became a massive scandal that threatens to topple the presidential ambitions of a rising political star. Here is how the scandal engulfing New Jersey Gov. Chris Christie developed:

Christie Chief of Staff Bridget Ann Kelly emails David Wildstein, a Christie appointee to the Port Authority and tells him, "Time for some traffic problems in Fort Lee."

Port Authority officials shut down two of the three access lanes to the George Washington Bridge from Fort Lee to conduct what they say is a traffic study.

Fort Lee emergency services coordinator Paul Favia writes Sokolich telling him of the traffic jam's effect on emergency services. He cites a 91-year-old woman who was in cardiac arrest. The woman’s family later says the slow response did not cause her death.

On the second morning of the closures, Sokolich apparently sent a text to Baroni: "Presently we have four very busy traffic lanes merging into only one toll booth. ... The bigger problem is getting kids to school. Help please. It's maddening."

NorthJersey.com columnist John Cichowski asks Sokolich about the lane closures. The mayor replies, "I've asked the Port for an explanation, but they haven't responded, I thought we had a good relationship. Now I'm beginning to wonder if there's something I did wrong. Am I being sent some sort of message?"

In an email obtained by the Wall Street Journal, Foye blasts the lane closings, calling them, "abusive" and pledged to investigate "how PA process was wrongfully subverted and the public interest damaged to say nothing of the credibility of this agency."

John Wisniewski, chairman of the state Assembly’s transportation committee, announces an investigation into the lane closings.

Baroni tells state Assembly that the lane closings were for a traffic study but admits Foye and public should have been warned ahead of time.

Christie mocks a reporter when asked if he knew about the lane closings. He sarcastically responds, "I worked the cones. Unbeknownst to anyone, I was working the cones."

Wildstein resigns his position from the Port Authority amid the George Washington Bridge scandal saying he, "had planned to leave the agency at some point this year."

Baroni resigns his position from the Port Authority. Christie’s office says Baroni's departure was already scheduled and not related to the scandal.

Wildstein goes to court to quash a subpoena that would compel him to testify before the Assembly's Transportation Committee.

CNN and other outlets obtain explosive emails that show communications between a number of Christie advisers. The emails give the scandal that had been simmering in New Jersey new legs and a national profile for the first time.

After a judge rules he must testify, Wildstein pleads the 5th Amendment to members of the Assembly committee investigating the lane closings.

Video: Suing for being stuck in traffic

Christie holds two-hour news conference in Trenton, telling reporters, "I had no knowledge or involvement in this issue, in its planning or its execution."

In his State of the State address, Christie addresses the scandal at the top of his remarks, saying, "The last week has certainly tested this administration."

Hoboken Mayor Dawn Zimmer first goes public on MSNBC with her allegation that top Christie administration officials conditioned Superstorm Sandy aid for her town on her support for a redevelopment project backed by the governor.

Zimmer tells "State of the Union" anchor Candy Crowley that Lt. Gov. Kimberly Ann Guadagno told her that she would release Sandy recovery funds if Zimmer would go along with a Christie-backed development. SOTU, "It's stunning. It's outrageous. But it’s true," Zimmer told CNN's Crowley on Sunday morning.

Christie is inaugurated for second term. He doesn't address the scandal in his address.

Kelly fights joint legislative committee's subpoena, invoking the 5th Amendment to not turn over documents, a source with knowledge of the matter tells CNN’s Chris Frates.

The attorney for former Christie campaign manager Bill Stepien Friday also said his client would fight the subpoena, claiming it would violate his Fourth and Fifth Amendment rights.

Christie says in interview on New Jersey 101.5 that his office and his administration has been complying with subpoenas and providing documents on a rolling basis.

Video: Christie: I did not know anything

On the same "Ask the Governor" show, Christie again says he knew nothing about the lane closings before they happened. "Nobody has said that I knew anything about this before it happened, and I think that’s the most important question," he says.

Hundreds of pages of court documents reviewed by CNN raise questions about Hoboken Mayor Dawn Zimmer's allegations against Christie and whether she deals in the same "pay-to-play" politics she's alleging against him.

Extension granted to Christie's reelection committee until February 24 to produce documents subpoenaed by the state legislative committee investigating the lane closures, according to a letter obtained by CNN’s Chris Frates.

The response is pending an opinion from the Election Law Enforcement Commission. Available documents will be provided on a rolling basis, the letter said.

David Wildstein, a former top Port Authority official who's is suspected of shutting down lanes to the country's busiest bridge in a possible act of political retribution, is expected to respond to his subpoena by about Feb. 10, according to the letter.

Christina Renna, who recently left the governor's office and has her own lawyer, was given an extension with the expectation that she produce documents in the next few weeks, according to the letter.

The Port Authority's Bill Baroni, who has since stepped down, began producing documents on a rolling basis Monday.

Newark, New Jersey-based Star-Ledger, the state’s largest newspaper, declares in an editorial column “We blew it” when the endorsed the governor’s re-election bid.

Christie makes fundraising visit to Chicago amid scandal in an attempt to repair damage to his national profile and raise money for the Republican Governors Association.

New Jersey State Police release a statement confirming that Chris Christie's helicopter did not fly over the traffic congestion during the scandal.

Sarah Palin tells "Inside Edition": "It's hard to be the CEO of an organization and not know what the closest people to you are up to. It's tough not to know. I know when I was mayor and manager of this city and then governor of the state; certainly you know what your top aides are up to."

The head of the Port Authority of New York and New Jersey, which runs the nation’s biggest bridge, orders an investigation into the role its police force may have played around the lane closures.

Chris Christie spends President's Day weekend in Puerto Rico with his family, while New Jersey digs out of storm. "After the storm had passed, the governor left the state this morning for a long weekend away with his family, and he will return Monday night," said spokesman Colin Reed.

At a town hall meeting, Christie fields questions from constituents who have yet to receive recovery aid from Superstorm Sandy. None in attendance ask about the scandals.

Republican Governors Association announces that Christie has raised a record $18 million for the organization since becoming chairman in November 2013.

Christie keeps a low profile while in Washington for annual governors' meetings, avoiding the Sunday talk show circuit, to which a number of his colleagues flocked.

Christie is absent as the RGA holds a press briefing with Christie's RGA predecessor, Bobby Jindal of Louisiana.

Is this what 'Jersey-style' means? 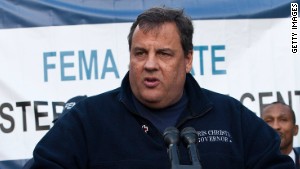 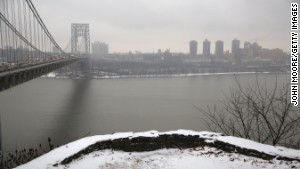 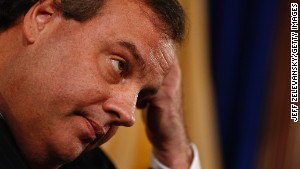 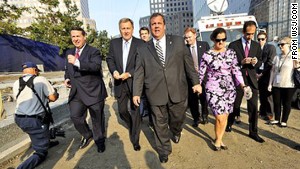