Obama said what?! State of the Union explained

The State of the Union address in two minutes: President Barack Obama calls for 2014 to be a "year of action"

(CNN) — Just think of President Barack Obama’s State of the Union address as a Rorschach of sorts. Sure, there were plenty of feisty proclamations and bold promises for action. But the political context behind the swagger reveals a President who is keenly aware that his time in the Oval Office has hit more than a few bumps. Here’s a decoder of Obama’s speech.

"Today, women make up about half our workforce. But they still make 77 cents for every dollar a man earns. That is wrong and in 2014 it’s an embarrassment. A woman deserves equal pay for equal work. She deserves to have a baby without sacrificing her job. A mother deserves a day off to care for a sick child or sick parent without running into hardship – and you know what, a father does, too. It’s time to do away with workplace policies that belong in a "Mad Men" episode."

Republicans have conceded they could do a better job discussing issues important to women—a misstep that helped cost them the last presidential election and some congressional seats. In November’s midterm elections when Republicans hope to regain control of the Senate and maintain control of the House, Obama was making an appeal to a group that has made a big difference for Democrats in recent elections. And just in case any female voters forgot, the very first bill he signed as President, the Lilly Ledbetter Fair Pay Act, made it easier for women to sue if they aren't being paid equitably.

What struck me the most was none of these are new issues. In fact, if you go back through the last State of the Union addresses that this President has delivered, you will hear all of these issues again: job training, universal Pre-K, equal pay for equal work, on and on, gun control, more money for research and development. So this is definitely the President's agenda and has been for some time now.

"If we are serious about economic growth, it is time to heed the call of business leaders, labor leaders, faith leaders, and law enforcement – and fix our broken immigration system. Republicans and Democrats in the Senate have acted. I know that members of both parties in the House want to do the same."

Obama didn’t say much on this topic, barely more than a paragraph. That’s because the push for immigration reform has sputtered during his tenure. After lots of sound and fury over immigration reform at the start of 2013, the issue was all but shelved in June after the Democratic-controlled Senate passed a bill that stalled in the GOP-controlled House of Representatives. Republicans in that chamber said they preferred to address immigration through a series of much smaller bills rather than the large Senate measure. The White House is holding its breath as it hopes this time around House Republicans might be more willing to strike a deal. Time will only tell if House Majority Leader Eric Cantor’s reluctant clapping at the immigration mention is any indication of which way things go.

He also said, 'Look, let's just get immigration reform done,’ kind of nodding to the Republicans. I think this is a President in a difficult time who is trying to jump-start his presidency. He's low in the polls, he's got a public that's not happy about the way things are going and he was saying, ‘OK, I'm a leader, I can get things done.'"

"The President talks a lot about income inequality. But the real gap we face today is one of opportunity inequality. And with this Administration's policies, that gap has become far too wide."

"Inequality has deepened. Upward mobility has stalled. The cold, hard fact is that even in the midst of recovery, too many Americans are working more than ever just to get by – let alone get ahead. And too many still aren’t working at all. Our job is to reverse these trends.”

Two very disparate pictures of America have emerged under Obama’s watch. On the one hand, there are more than 48 million people on food stamps—an all-time high—and the country’s poverty rate has hovered at 15% for the past three years. The unemployment rate decline can, in part, be attributed to the fact that some people have just given up looking for work. Meanwhile, the rich keep getting richer. The richest 1% in the country – netted 95% of the income gains over the past three years. Obama’s challenge: address the inequity as best he can before leaving office.

One of the things about working with candidates is when they're in a weak political position, sometimes they confuse volume and loudness with strength. That's what I felt the first half of the speech, that he was willing himself to demonstrate strength and confidence, but he did it with optimism. That is the rare gift a president has. The President is the only guy who can say, 'We're going to some place better, follow me.' I think it's going to help him and the Democrats. The policy was, I thought, too small for the moment.

President Obama put healthcare reform in the spotlight during the address.

"The American people aren’t interested in refighting old battles. So again, if you have specific plans to cut costs, cover more people, and increase choice – tell America what you’d do differently. Let’s see if the numbers add up. But let’s not have another 40-something votes to repeal a law that’s already helping millions of Americans."

Republicans, especially those in the House, haven’t exactly been shy about letting the President know exactly what they think about the health care reform law he championed. They’ve voted numerous times to dial back portions of the Affordable Care Act. And the Obama administration has fought hard to defend it at the Supreme Court, in Congress, and, more recently, in terms of public perception following the botched rollout of its flagship website.

I think it was in a way a very traditional State of the Union speech where the President listed things he cares about, his priorities. What struck me was his going on the offense on health care. If the website were not up and working, I guarantee you that the President would not be doing that. But he went on offense and said 'we don't need 40 more votes, right? We're done with that. Let's just move on.'

Obama and Congress: Where they stand in the polls 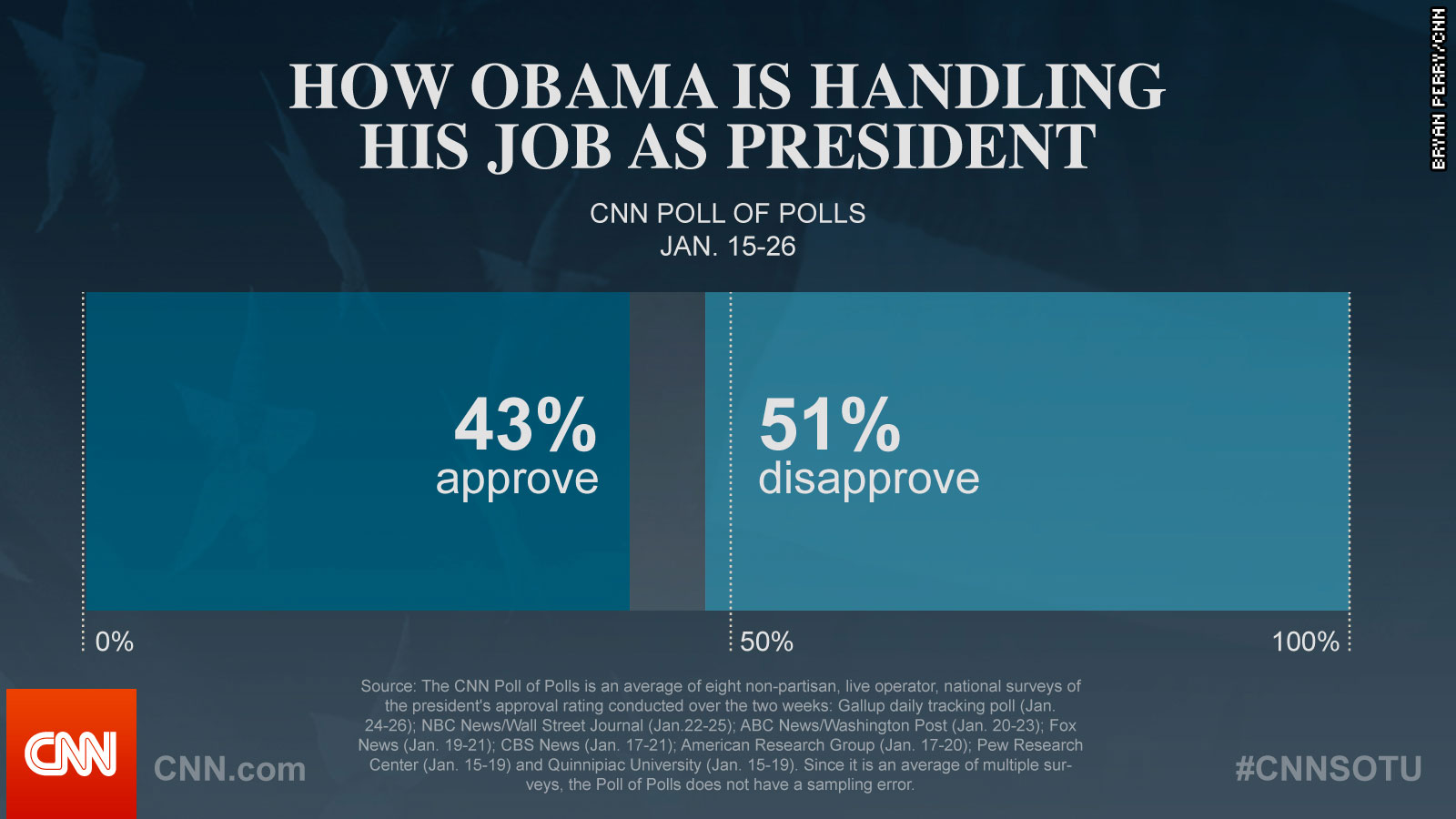 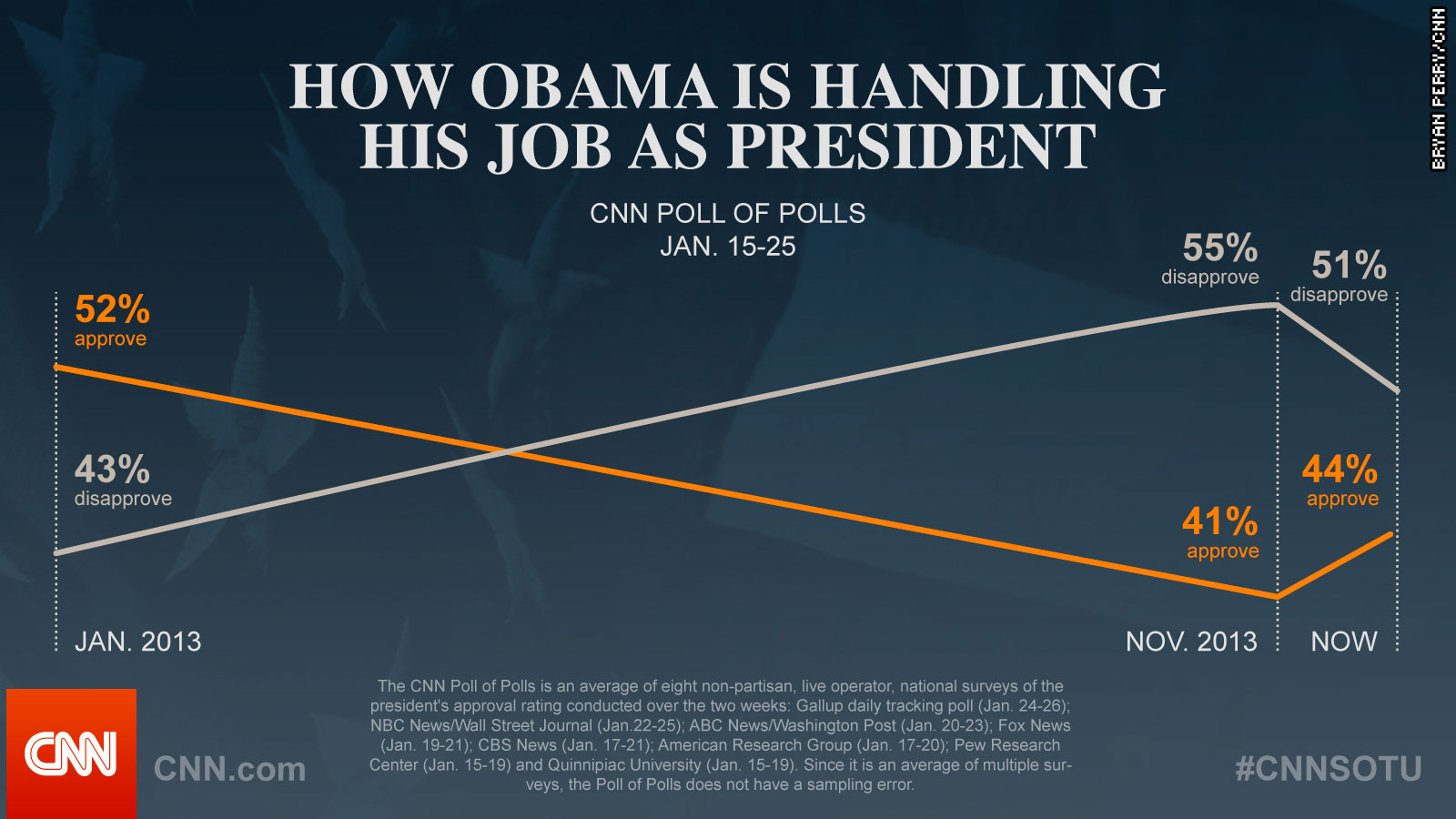 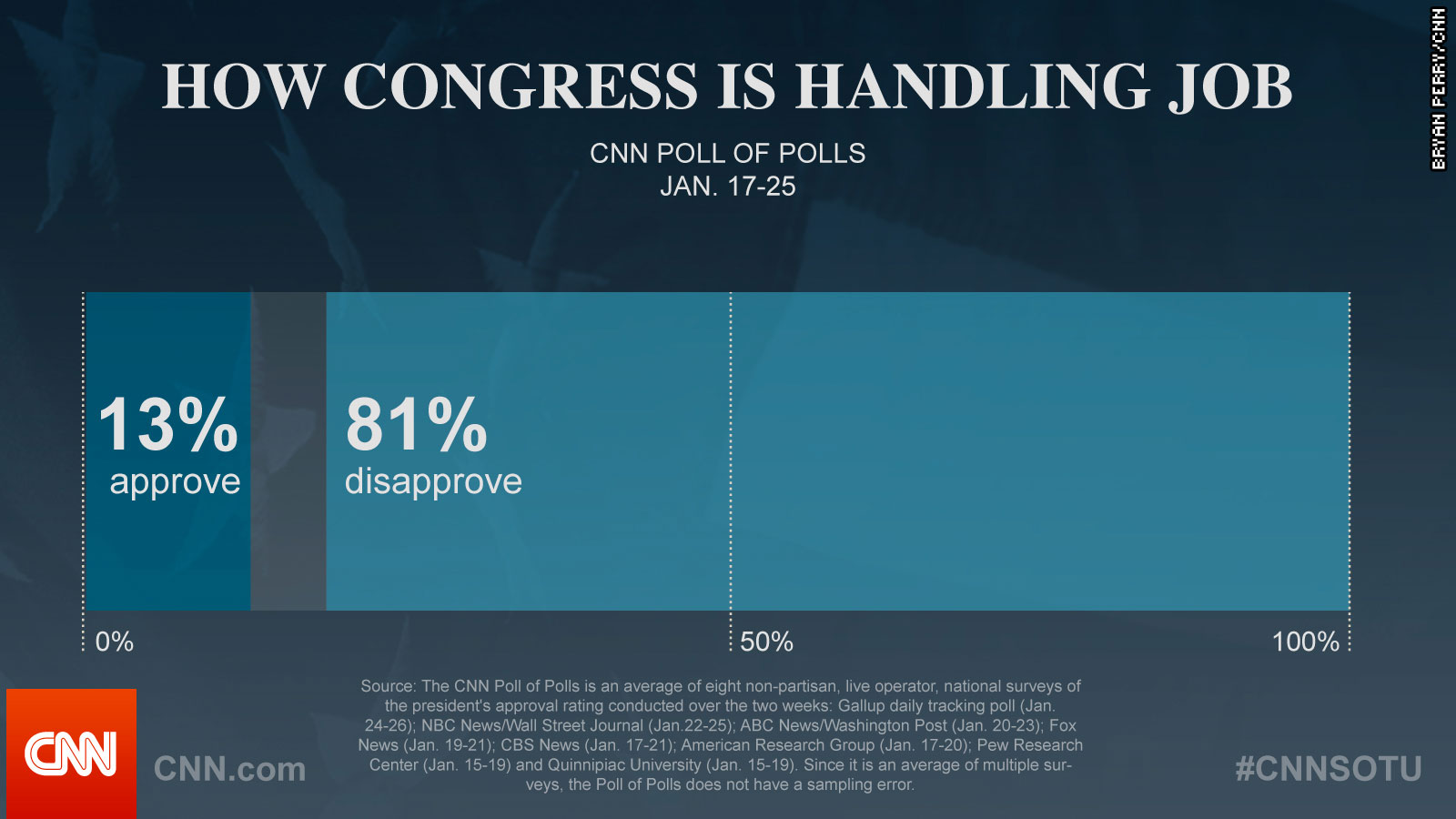 From Newt Gingrich, host representing the right on CNN's "Crossfire:"

I think it was a very good speech. It communicated to the country. His close with the young Ranger was extraordinarily powerful. And most people, if they stayed through the speech, would have been impressed. Doesn't mean he's going to move the country dramatically, but for this evening, he gave a very solid speech that I think had real power to it.

From Candy Crowley, host of CNN's "State of the Union:"

It's hard to see where much is going to be different in a Republican response to that. You add in that it's also an election year, it makes things difficult, not impossible, but certainly difficult.... It just doesn't sound like a year when great big things are going to happen.

I think beginning with the stories of individual citizens doing things to change their lives was sort of a lesson to Washington -- if the American people can do it in tough times, find ways to make their lives better, why can’t we get some things done? It was a smart (way in) which to start.

Complete coverage: State of the Union

Obama calls for 'year of action'

Read the State of the Union address

This year's speech a defining test for Obama