What happened with Asiana Flight 214? 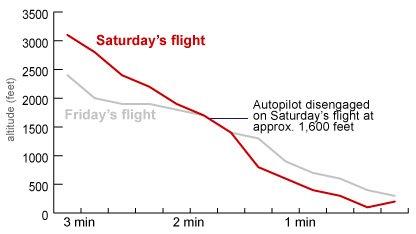 The flight descended faster and more steeply than previous flights on this same route.

The graph to the right, showing approximate altitude data from FlightAware.com, displays approach information from the same flight the day before the crash and Saturday's approach, which indicates a steeper decline in altitude.

Note: NTSB investigators have found nothing to corroborate online flight tracking records, such as the ones shown here, that Saturday's Flight 214 descended from cruising altitude much more steeply and rapidly than previous Asiana flights on the same route. The National Transportation Safety Board says it found no "abnormally steep descent data." 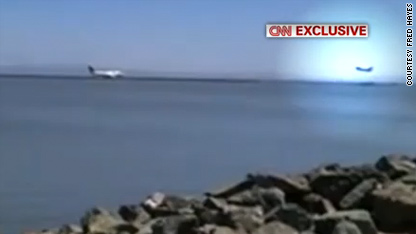 A preliminary readout from the flight data and cockpit voice recorders shows the aircraft was approaching well below the target landing speed of 137 knots (157 mph).

At seven seconds before impact, the pilots are heard acknowledging the slow speed and attempted to spool up the engines to increase the plane's speed.

At four seconds, the plane's computer triggers a "stick-shaker" warning, indicating an impending aerodynamic stall. A stall occurs when there is not enough airspeed to sustain lift to keep the aircraft in flight. 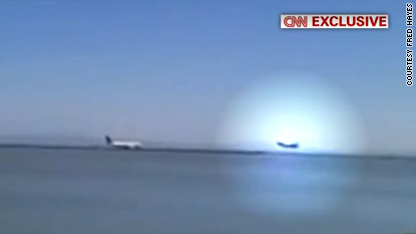 The flight data recorder shows the lowest recorded airspeed during the approach, at 103 knots (118 mph). At this time, the engine power was recorded at 50% and increasing.

One of the crew members call out for a "go-around," an attempt to abort the landing. Both engines were producing power up to the time of impact, according to investigators. 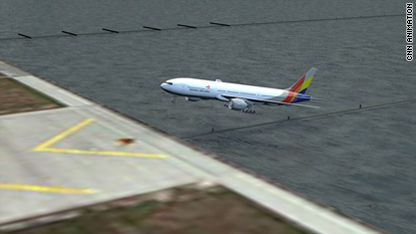 At 1.5 seconds before impact, a second call for a go-around is made, this time by another member of the crew.

Passengers on board describe hearing the engines spooling up and the nose tilting up just before impact. 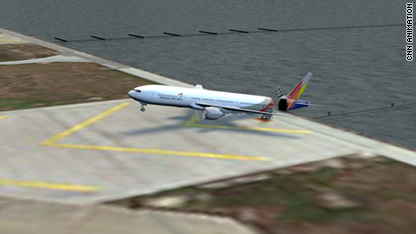 The flight data recorder indicated an airspeed of 106 knots (122 mph) at the time of the crash, well below the targeted 137 knots.

According to investigators, the plane's main landing gear struck the rock sea wall well before the start of the runway, followed by the tail section of the aircraft.

NTSB investigators discovered the lower portion of the tail cone in the rocks of the sea wall, as well as a significant piece of the tail found in the water. Additional parts were reportedly visible in the water at low tide.

Three flight attendants in the rear of the plane were ejected from the aircraft during impact, and were found injured beside the runway. 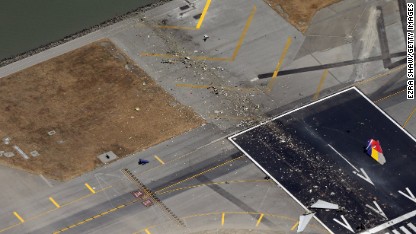 The debris field runs from the water, slightly right of the paved threshold and runway center, all the way to the stopped aircraft fuselage. Pieces of the cabin were discovered very early on in the debris field, including aircraft parts, galley materials, newspapers, and magazines, according to investigators.

One of the eight doors on the aircraft was separated during the impact. The remaining seven doors were found attached to the fuselage.

The rest of the Boeing 777's tail section, including its vertical and horizontal stabilizers, was found near the end of the paved threshold, just before the start of the runway. Total loss of the tail section would have made the aircraft extremely difficult to control. 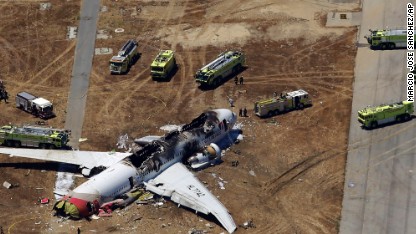 The fuselage came to rest off the left side of the runway, and it's pointed toward the right. 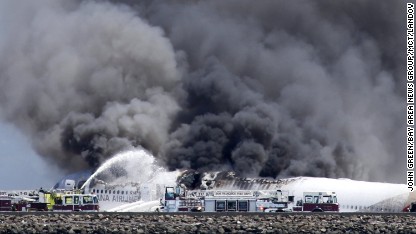 Most of the fire damage to the aircraft occurred after the Boeing 777 came to a stop on its belly, but most of the passengers were able to evacuate before fire breached the passenger cabin. Passengers described the cabin interior as heavily damaged, with overhead bins dropping and two life raft/escape slides inflating inside the aircraft, trapping two flight attendants, whom passengers and other crew members helped free.

The coroner says one of the two passengers killed appears to have been run over by an emergency vehicle, but final cause of death has not been determined. Asiana has identified the two deceased as Ye Mengyuan and Wang Linjia of China. Both were 16.

There were three pilots in the cockpit at the time of the crash, according to crew interviews conducted by investigators.

The "flying pilot" -- as NTSB chairman Deborah Hersman referred to him -- was a veteran pilot with nearly 10,000 hours of total flying time, though he was in his "initial operating experience" in flying the Boeing 777. He had flown 10 legs and had about 35 hours of flying time with the 777, which put him about halfway through the required training of 20 legs and 60 flight hours, when the plane went down, Hersman said.

Of the pilots in the cockpit, only the relief first officer was injured -- neither of the two pilots at the controls were admitted to the hospital. The pilots did not undergo drug or alcohol testing after Saturday's crash landing, Hersman said. The United States does not have "oversight" of foreign-based operators or their crews. 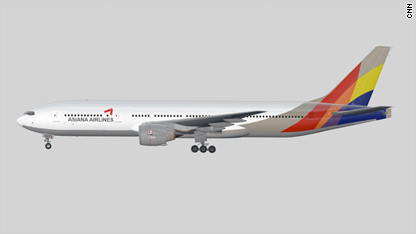 Asiana Airlines took delivery of the aircraft involved in Saturday's crash landing in 2006. It is one of 12 Boeing 777 aircraft in Asiana's fleet.

Only one other incident involving a Boeing 777 resulted in a complete loss: British Airways Flight 38 from Beijing landed short of the runway at London's Heathrow airport in January 2008 after engine trouble shortly before landing, blamed on fuel icing after a lengthy flight over Siberia. No one died in that incident. Design changes were made to the 777 to minimize fuel icing when flying routes over extremely cold regions.