At a glance: Key players, findings in Penn State report 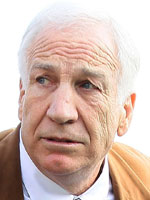 Founder of The Second Mile and retired Penn State assistant football coach; convicted of sexually abusing young boys he met through the non-profit organization over a period of at least 15 years. 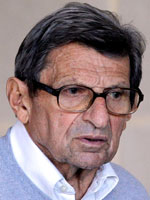 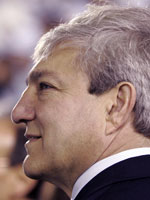 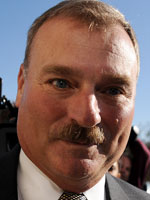 Former vice president for finance and business at Penn State; charged with one count of felony perjury and one count of failure to report abuse allegations. 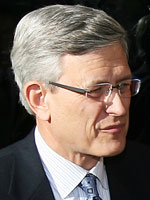 Former Penn State athletic director; charged with one count of felony perjury and one count of failure to report abuse allegations. 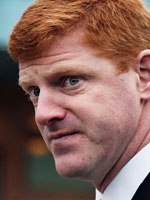 Penn State receivers coach who allegedly witnessed the rape of a young boy by Jerry Sandusky in a Penn State locker room in 2002; placed on administrative leave.

Below are selections from the timeline of events as published by the Freeh report, ending with Sandusky's conviction in June 2012. Entries have been edited for clarity.

1969Sandusky joins the Penn State football coaching staff.
May 1998Sandusky assaults Victim 6 in Lasch Building shower. Victim 6's mother reports the incident to the University Police Department, which promptly begins an investigation.
Schultz is informed of the investigation and notifies Spanier and Curley. Schultz's confidential notes about Sandusky state: "Behavior -- at best inappropriate @ worst sexual improprieties" and "At min -- Poor Judgment." Schultz also notes: "Is this opening of pandora's box?" and "Other children?"
May 1998, cont.University Police Chief Thomas Harmon e-mails Schultz: "We're going to hold off on making any crime log entry. At this point in time I can justify that decision because of the lack of clear evidence of a crime."

Curley tells Schultz and Spanier that he has "touched base with" Paterno about the incident. Later, Curley asks Schultz for an update, saying "Coach is anxious to know where it stands."
May 15, 1998At a Board of Trustees meeting, Spanier does not notify the board of the ongoing investigation.
June 1998The district attorney declines to bring charges against Sandusky.

A University Police detective and Department of Public Welfare caseworker interview Sandusky. Sandusky admits hugging Victim 6 in the shower but says there was nothing "sexual about it." The detective advises Sandusky not to shower with any child. Sandusky says he won't.
June 1998, cont.Police chief Harmon e-mails Schultz about the meeting, saying Sandusky's "account of the matter was essentially the same as the child's." Harmon tells Schultz that Sandusky said "he had done this with other children in the past." Harmon says "there was no criminal behavior established and that the matter was closed as an investigation."
Schultz e-mails Curley and Spanier: "I think the matter has been appropriately investigated and I hope it is now behind us."
Spring-Summer 1999Sandusky says he is considering retirement since he will not be the next head football coach but wants "to maintain a long-term relationship with the University."
June 1999A retirement agreement with Sandusky is reached, including an unusual lump sum payment of $168,000, an agreement for the university to "work collaboratively" with Sandusky on The Second Mile and other community activities, and free lifetime use of locker room facilities.
As the retirement package is being finalized, Curley requests the emergency rehire of Sandusky for the 1999 football season, which is approved.
August 1999Sandusky is granted "emeritus" rank, which carries several privileges, including access to university recreational facilities. Documents show the unusual request for emeritus rank originated from Schultz, was approved by Spanier, and granted by the provost, who expressed some uneasiness about the decision, given Sandusky's low academic rank and the precedent that would be set.
December 1999Sandusky brings Victim 4 to the 1999 Alamo Bowl in Texas and assaults Victim 4 at the team hotel.
November 2000Sandusky assaults Victim 8 in Lasch Building shower.

A janitor observes the assault, but does not report it for fear that "they'll get rid of all of us."
February 9, 2001McQueary witnesses Sandusky's assault on Victim 2 in the Lasch Building shower.
February 10-11, 2001McQueary reports the assault to Paterno on Saturday, February 10.

On Sunday, Paterno reports the incident to Curley and Schultz. Schultz then consults with university outside counsel.
February 12, 2001Spanier, Schultz and Curley meet. Schultz's notes indicate he spoke to Curley, reviewed the history of the 1998 incident, and agreed that Curley would discuss the incident with Paterno and recommend that Curley meet with Sandusky.

Schultz asks Harmon if the report of the 1998 incident is in police files; Harmon responds that it is.
February 25-26, 2001Spanier, Schultz and Curley meet and devise an action plan, which includes telling the board of Second Mile, reporting the incident to the Department of Welfare, and telling Sandusky to avoid bringing children alone into the Lasch Building.
February 27-28, 2001Curley proposes a new plan to Spanier and Schultz: to tell Sandusky "we feel there is a problem" and offer him "professional help." "If he is cooperative we would work with him to handle informing" The Second Mile, Curley wrote in an e-mail, adding that if Sandusky does not cooperate, "we don't have a choice and will inform" the state Department of Public Welfare and The Second Mile. "Additionally, I will let him know that his guests are not permitted to use our facilities."
February 27-28, 2001, cont.Spanier e-mails Curley and Schultz: "This approach is acceptable to me. ... The only downside for us is if the message isn't 'heard' and acted upon, and we then become vulnerable for not having reported it. But that can be assessed down the road."
Schultz concurs with the plan, saying in an e-mail, "this is a more humane and upfront way to handle this." Schultz adds, "we can play it by ear" regarding informing DPW of the assault.
March 5, 2001Curley is scheduled to meet with Sandusky. In his 2011 grand jury testimony, Curley said he told Sandusky "we were uncomfortable" about the incident and would report it to The Second Mile. Curley says he also told Sandusky to stop bringing children to the athletic facilities. Sandusky's counsel later reports that no accusation of sexual abuse was made at this meeting and that Sandusky offered to provide the name of the boy to Curley, but Curley did not want his name.
March 16, 2001At a university Board of Trustees meeting, Spanier does not report the Sandusky incident to the board.
March 19, 2001Curley meets with the executive director of The Second Mile and shares "the information we had with him." The Second Mile leadership concludes the matter is a "non-incident," and takes no further action.
August 2001Sandusky assaults Victim 5 in Lasch Building shower.
January 7, 2010The University receives subpoenas from the Pennsylvania attorney general for personnel records and correspondence regarding Sandusky.
September 16, 2010A Patriot-News reporter contacts Spanier; the two exchange e-mails about Spanier's knowledge of an investigation of Sandusky for suspected criminal activity while he was a Penn State employee.
January-April, 2011Schultz, Paterno, Curley and Spanier appear before the grand jury.
Summer 2011At the first of three board of trustee meetings, Spanier and Baldwin downplay the importance of the investigation to Penn State and the board asks limited questions.

In the subsequent two meetings, the board asks no questions about the investigation.
November 4, 2011Former university outside counsel Wendell Courtney e-mails Schultz a newspaper story about the Sandusky charges. Shultz replies, "I was never aware that 'Penn State police investigated inappropriate touching in a shower' in 1998."

Criminal charges are filed against Sandusky, Schultz and Curley.
November 5, 2011Sandusky is arrested.
November 6, 2011The University Board of Trustees places Curley on administrative leave; Schultz re-retires.
November 9, 2011The Board of Trustees removes Spanier as president and removes Paterno as head football coach.
June 2012After a 10-day trial, Sandusky is convicted on 45 out of 48 charges against him. His bail is immediately revoked and he is taken to jail. Sentencing is scheduled for three months later.
Read the full
report (PDF) »

Findings from the report

The most powerful men at Penn State failed to take any steps for 14 years to protect the children who Sandusky victimized.-- Louis Freeh, former FBI director and federal judge who spearheaded the review

The Freeh report said "the avoidance of the consequences of bad publicity" as a significant cause behind the "failure to protect child victims." The report also cited:

Is this opening of pandora's box? Other children?-- From the notes of Gary Schultz, former vice president for finance and business at Penn State, May 5, 1998
[Reporting the incident] would have been like going against the President of the United States in my eyes. ... I know Paterno has so much power, if he wanted to get rid of someone, I would have been gone. -- "Janitor B," to the special investigative council
I didn't know exactly how to handle it and I was afraid to do something that might jeopardize what the university procedure was. So I backed away and turned it over to some other people, people I thought would have a little more expertise than I did. It didn't work out that way.-- Joe Paterno to the Washington Post, January 14, 2012