The world's largest exercise in democracy is well underway, with the second round of polling taking place on April 18. We'll be following every twist and turn as up to 900 million people vote to choose their next leader.

A polling supervisor was gunned down by alleged Maoist militants in the eastern state of Odisha on Wednesday.

The supervisor, Sanjukta Digal was leading a team to a polling station in the Kandhamal district on the eve of the second phase of voting in the state.

An improvised explosive device was detonated as polling officials were traveling towards a polling booth for an inspection.

“They tried to blow up the vehicle but did not succeed in that and then they open fired,” said Sanjeeb Panda, senior Odisha police official.

The state's Chief Minister Naveen Patnaik tweeted that he was "deeply anguished" by the attack and offered his condolences.

In another incident in the same district of Kandhamal, alleged Maoists approached a vehicle heading towards a polling centre, forced officials to disembark before setting fire to the vehicle, said Panda.

Maoist attacks in Chhattisgarh, Odisha and Jharkhand are common during election season as they attempt to dissuade voters from casting their ballots.

Last week, five people including a Bharatiya Janata Party legislator were killed in Chhattisgarh in a bomb attack as they were returning from an election rally.

The police had attributed the attack to Maoist rebels in the region.

Indian Maoist -- or Naxalite -- groups have been active in the country since the 1960s, but the modern insurgency did not begin until the early 2000s with the emergence of the Communist Party of India (Maoist) and its armed wing, the People's Liberation Guerrilla Army. More than 2,100 civilians in India have been killed in the Maoist insurgency since 2010.

Voting is currently underway as scheduled in the Odisha district and more security has been provided at the booths.

One groom in Maharashtra state's Buldhana district didn't let his wedding get in the way of casting a vote, according to the Regional Office of Press Information Bureau.

The northeastern state of Manipur is reportedly making history today by becoming the first state to have polling booths in an assembly constituency staffed entirely by women.

Out of 1,300 polling stations, 76 will be staffed by women polling officers, according to CNN affiliate CNN News18.

“Manipur is known for its female power. Most movements on social issues have been headed by the Manipuri women. We thought election is the right time to showcase this power through this kind of an arrangement," said PK Singh, chief electoral officer for Manipur, CNN News18 reports.

A total of 11 states are heading to the polls Thursday in the second phase of elections in India.

Coming in at second is Karnataka with 14 seats up for grabs. In the north, Uttar Pradesh will participate again in the second phase for 8 seats.

BJP’s star candidate Hema Malini is contesting today from her seat in Mathura in Uttar Pradesh.

Ballots will also be cast in the states Maharashtra, Jammu and Kashmir, Bihar, Odisha, Assam, West Bengal, Chhattisgarh, and Manipur.

The tiny union territory of Puducherry on the coast in Tamil Nadu will also be voting for one seat.

Elections in one constituency Tamil Nadu was canceled after issues of voter influence surfaced there in the last few weeks. And elections is East Tripura were postponed due to a law and order issue

Five more phases of voting are still to come over the next five weeks. The next phase will be the largest with 115 seats in play across 12 states.

India heads to the polls today, for the second phase of the world's biggest exercise in democracy.

In many ways, the election is set to be a referendum on the leadership of incumbent Prime Minister Narendra Modi, who is seeking a second term. His Bharatiya Janata Party (BJP) scored a massive landslide in 2014, but its fortunes are looking shakier this time around.

Just catching up? Here's everything you need to know. 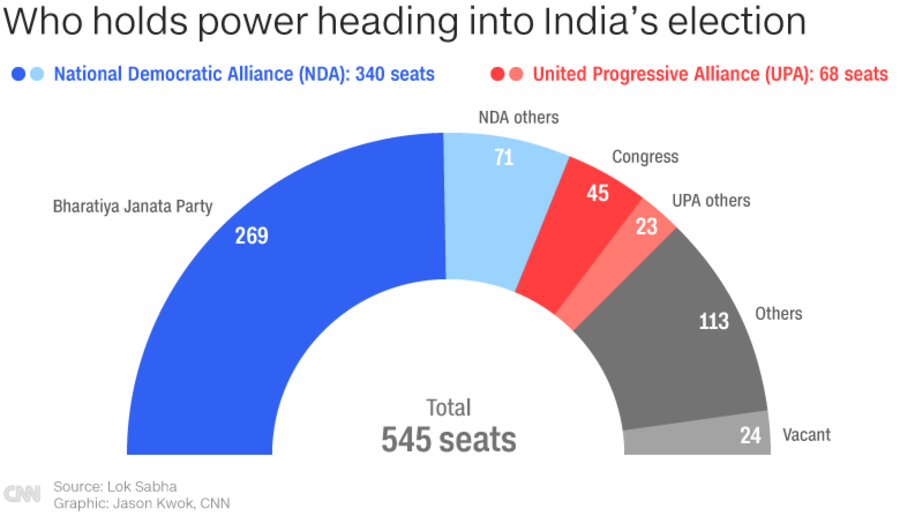 What are people voting for?

Around 900 million eligible voters will be electing 543 members of the country's lower house of parliament, the Lok Sabha.

Whichever party or coalition wins more than 272 seats in the Lok Sabha will go on to form a government, with the leader of the biggest party typically becoming Prime Minister.

Who are the main parties?

While there are a host of parties and candidates across the country, the only two with a real chance of leading the next government are the Bharatiya Janata Party (BJP), and the Indian National Congress Party.

BJP leader Modi has been India's Prime Minister since 2014 and his party is currently the largest in parliament.

Congress has historically dominated Indian politics, but at the 2014 election the party only won 44 seats, down from 206 in the previous election.

What's the process and how long does it take?

India likes to boast that it is the world's largest democracy -- but that level of organization takes time.

Millions of election officials will be running the more than 1 million polling stations around the country, with voting take place in seven stages between April 11 and May 19:

Votes are cast via a battery-powered electronic voting machine, which the country's Election Commission assures is non-hackable and protected against sabotage.

After they have cast their ballot, voters' fingers are marked with indelible ink to prevent them voting again.

When will we know the result?

After almost a month of voting, election officials will begin counting ballots on the morning of May 23. Counting continues until it is finished, but we should have a good idea of who is the biggest party by around 12 p.m. that day.

That party may be able to form a government if it has enough seats. If it doesn't, it could come together with other, smaller parties to pass the 272 seat margin.

Those negotiations could take a long time, especially if the vote is extremely close and both of the main parties -- BJP and Congress -- have a decent chance of building a governing coalition.

Voting has started in parts of India in phase two of the country's month-long election process.

Polls opened Thursday in 95 constituencies across 11 states and one union territory.

India's general election is spread over seven dates, with polling taking place for different constituencies on April 11, April 18, April 23, April 29, May 6, May 12 and May 19.

Elections results will be announced on May 23.

At least 29 people have died and 20 injured when unseasonal rain and storms hit several parts of India on Tuesday and Wednesday.

In a tweet on Wednesday, Prime Minister Narendra Modi expressed solidarity with "all those affected due to unseasonal rainfall and storms." He pledged around monetary assistance for the next of kin of those who lost their lives.

“The government is doing its best to provide all possible assistance to those affected. The situation is being monitored closely,” Modi said.

The main opposition Congress Party said in a tweet that it was "deeply saddened by the loss of lives" and urged "all Congress workers to support the government in its relief efforts."

According to the Indian Meteorological Department, thunderstorms accompanied with strong winds and lightning are expected to continue in several parts of the country for the next couple of days.

Indian school students paint their hands during an election awareness campaign ahead of the second phase of India's general election in the eastern city of Chennai on April 12, 2019, according to AFP and Getty Images.

Elections have been temporarily canceled in a district in the southern state of Tamil Nadu after reports of "voter influence" surfaced during investigations.

As per procedure, the Election Commission (EC) recommended to the president that fair elections were not viable in the 8-Vellore parliamentary constituency, who then issued a cancelation order.

Last month, the income tax department conducted raids at locations associated with a regional leader who is also running in the election. Kathir Anand is a member of the Dravida Munnetra Kazhagam (DMK) and forms the regional opposition party in Tamil Nadu.

Officials seized cash totalling $1.6 million from one location and it was “packed in plastic packets” with details of each district, the EC said in a statement.

Money distribution in the run up to elections is fairly common in India, where voters are bribed with cash and liquor to vote for a particular party. The EC has seized millions of dollars in cash, gold and liquor in the last month during raids, inspections and vehicle checks at borders.

Since the announcement of the dates of the election in March, the EC has made seizures totalling $373 million. The seizures also include narcotics and other freebie items like electronics.

“In the Commission’s considered opinion, allowing the current electoral process to proceed and conducting the poll in the constituency on 18th April, 2019, as scheduled, in such a vitiated atmosphere would have severely jeopardised the conduct of free and fair election in the said 8-Vellore Parliamentary Constituency,” said the EC statement.

The EC has not announced the new dates for polls in the Vellore constituency.