Russian President Vladimir Putin proclaimed the effort by Russian forces to capture Mariupol a "success," but ordered Russian forces to halt outside the city's besieged Azovstal steel factory and blockade it "so that a fly can't get through."

In a meeting with Russian Defense Minister Sergei Shoigu, Putin said: "Completing the military task of liberating Mariupol is a great achievement, I congratulate you."

Ukrainian forces still hold the Azovstal plant in the southeastern port city and Shoigu told Putin that Russian forces would need three or four days to take over the factory.

Putin then said the Russian forces "must think ... about preserving the life and health of our soldiers and officers," adding:

There is no need to climb into these catacombs and crawl underground through these industrial facilities. Block off this industrial area so a fly cannot get through."

Putin said that Russia would offer the Ukrainian defenders still in the plant to lay down arms.

"The Russian side guarantees their lives and decent treatment in accordance with the relevant international legal acts," he said. "All those who are injured will receive qualified medical assistance."

Ukrainian commanders on the ground have said Russian forces have not honored agreements to open humanitarian corridors or enforce ceasefires and have continued to bombard the city.

The port city has been nearly completely destroyed by weeks of Russian bombardment, and tens of thousands of civilians still await evacuation, according to Ukrainian officials.

In a statement on Thursday, Ukrainian Deputy Prime Minister Iryna Vereshchuk urged the Russian side to open an evacuation corridor from Azovstal. "There are about 1,000 civilians and 500 wounded servicemen there now," she said.

"They all need to be evacuated out of Azovstal today! I call on world leaders and the international community to focus their efforts on Azovstal now. It is a key point and a key moment for the humanitarian efforts now!"

Efforts to evacuate Mariupol continue, but the besieged southeastern port city remains under Russian bombardment, according to the Ukrainians.

Here are the latest developments on Russia's war in Ukraine:

Russian President Vladimir Putin said Thursday that there is no need to storm the industrial area around the Azovstal steel plant in Mariupol and those who choose to surrender should be treated in accordance with international conventions.

"I believe the proposed storming of the industrial zone is no longer necessary," Putin told Russian Defense Minister Sergei Shoigu at a meeting at the Kremlin, according to state media.

The industrial area, Putin told Shoigu, should be sealed and those remaining at the plant should once again be offered to surrender in exchange for their lives and a "dignified treatment."

Putin also congratulated Shougu and the Russian military on taking control of the city of Mariupol.

"Completing the military task of liberating Mariupol is a great achievement, I congratulate you," Putin said.

Ukrainian officials have denied that Mariupol has fallen to Russia.

At a meeting with Putin at the Kremlin, per Russian media, Shoigu said "the remaining nationalists and foreign battalions are securely blocked" at the Azovstal plant.

Some context: As the barrage of Mariupol continues, the plant is among the last significant holdouts of Ukrainian forces in the city and is sheltering hundreds of soldiers and civilians.

Two top Ukrainian officials said they are ready to head to Mariupol to negotiate the evacuation of soldiers and civilians, according to a captain with Ukraine's Azov Regiment.

Vladimir Putin did his best to put a menacing spin on Russia's testing of a new intercontinental ballistic missile on Wednesday.

The Russian President said the successful launch of the "Sarmat" ICBM -- nicknamed the "Satan II" in the West and capable of delivering multiple nuclear warheads as far as the continental United States -- would "give thought to those who are trying to threaten Russia."

But Western experts portrayed the test as "nuclear saber-rattling," saying the threat to the US or its allies was "extremely low" and suggesting Putin's real motivation was to distract his domestic audience from Russia's recent military failures, such as the sinking of its Black Sea flagship, the Moskva. 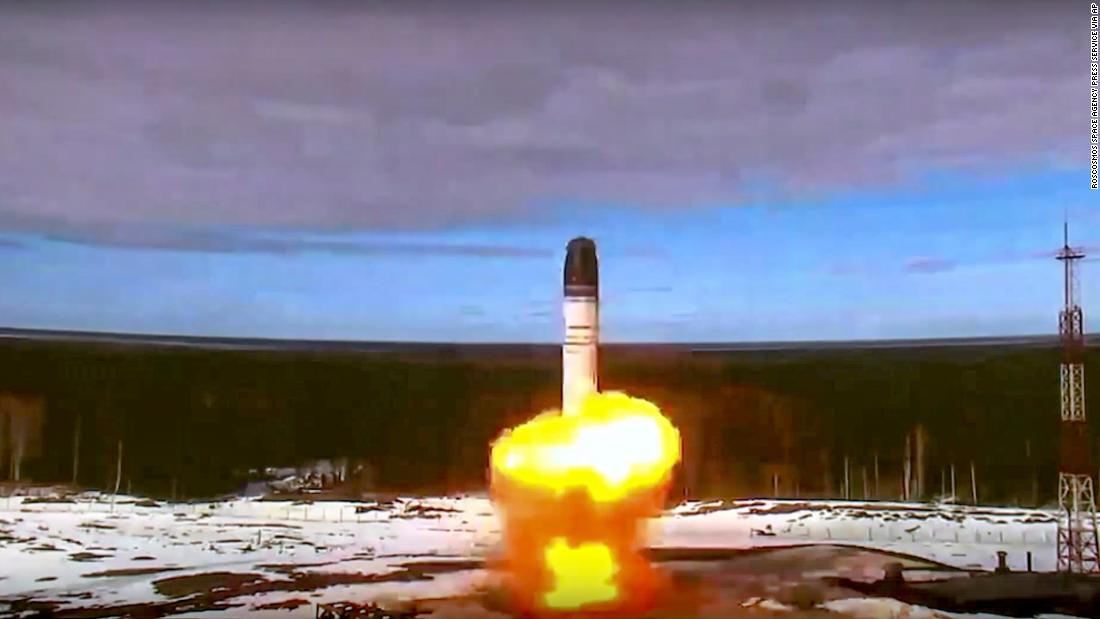 The co-commander of one of the Ukrainian units encircled in the port of Mariupol said Thursday that Russian forces continued their bombardment of the city amid negotiations to evacuate civilians.

Maksym Zhorin, co-commander of Ukraine's Azov regiment, said in televised remarks that Russian forces "have not stopped shelling areas of Mariupol" amid negotiations on so-called "green corridors" for evacuation from the city, limiting the number of people who can be evacuated.

"Think about it, there are more than 100,000 people in the city, some of them under rubble, some in basements," he said.
"Many of them are in the territory of Azovstal [steel factory], there are a lot of children, a lot of women, the elderly. And today, while agreeing on a green corridor, the Russians simply cynically fired on fortifications, on shelters where civilians were. So, of course, the Russians cannot be trusted in any case."

Two senior Ukrainian officials said Wednesday they were ready to meet their Russian counterparts to negotiate safe passage for civilians and Ukrainian troops holding out in the city. Zhorin expressed the hope that a third country could act as a guarantor for an evacuation agreement.

Ukrainian officials said they hoped they would be able to resume evacuations Thursday.

"Today, indeed, a number of people were still able to find and get on buses, but they are still in uncontrolled territory," Zhorin said. "And we can consider this evacuation at least a little successful when Ukrainians, civilians, will be in the territory controlled by Ukraine. This has not happened so far."

"They spent the night in Berdiansk and are now heading to Vasylivka," Vereshchuk said in a statement on Telegram. "We are waiting for them in Zaporizhzhia soon."

Some context: Early on Wednesday, Vereshchuk said an evacuation corridor had been agreed upon with the Russians for women, children and the elderly. And people were asked to gather departure on Shevchenko Boulevard near the Port City shopping mall at 2:00 p.m. local time.

However, officials said it did not proceed as hoped.

According to officials, tens of thousands of civilians remain in Mariupol, which is encircled by Russian forces and has endured weeks of intense bombardment.

Russian forces continued to press an offensive in eastern Ukraine, according to Serhii Haidai, head of the Luhansk regional military administration.

Haidai told CNN on Wednesday that 80% of Luhansk's territory is under Russian control amid a major battle for the control of the Donbas region.

"The enemy tried to entrench in the western and northwestern parts of Rubizhne, but failed," he said. "They carried out unsuccessful assaults in the direction of Novotoshkivske, the assault on Popasna continues. " 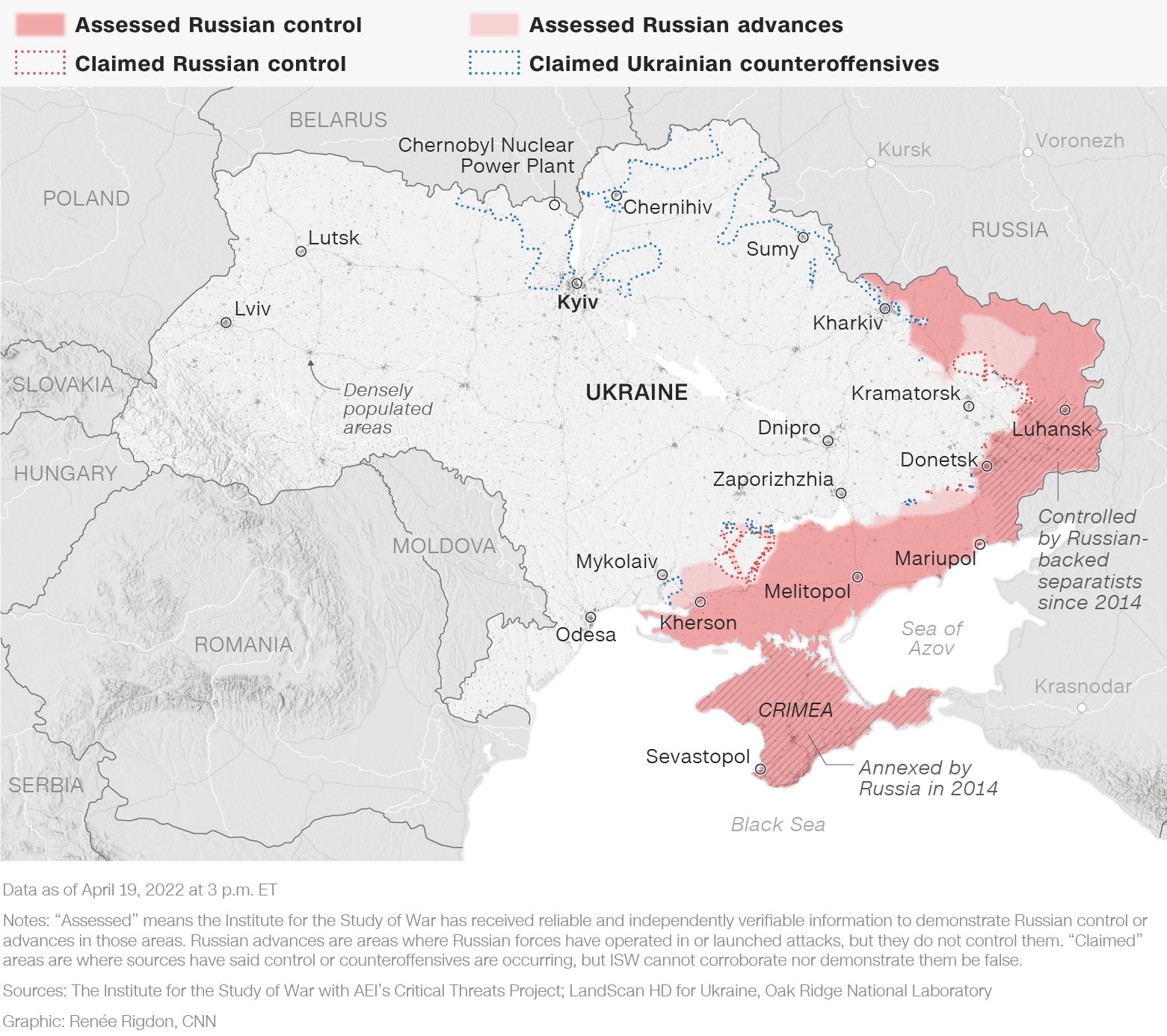 Residential buildings in the towns of Rubizhne and Novodruzhesk were destroyed by Russian fire and that no food warehouses remained in Severodonetsk, he said. CNN is unable to confirm the details of the destruction described by Haidai.

"Much of the destruction caused by the Russian invasion in the last 24 hours is in Rubizhne and Novodruzhesk," he said. "People are receiving food only from humanitarian supplies."

"Six fires broke out in residential buildings in the region," he said, adding that they have been extinguished and five people were rescued.

The director of the largest children's cancer foundation in Ukraine says an all-hands-on-deck effort from volunteers, doctors and officials in Ukraine and abroad has been needed to get children undergoing cancer treatment out of harm’s way during the Russian invasion.

Yuliya Nogovitsyna, director of program development at Tabletochki, told CNN on Wednesday that evacuating patients to western Ukraine — and then onward to bordering nations — "was a sort of 'Mission: Impossible.'"

"From the very first days of the war, we tried to evacuate children from the biggest hospitals. We took them in rather large groups and we sought for either buses or train cars to bring them to Lviv," Nogovitsyna said.
"It was very difficult and challenging because it was just near impossible to find any means of transport to move these kids."

Many children were in "severe conditions,” Nogovitsyna said, some with low blood counts or fever. Ukrainian officials would help evacuate whenever possible by providing buses or transport, she said, "but every time it was an ad hoc situation and we had to find the solution."

Lviv and other parts of western Ukraine are not near the frontlines of the Russian invasion but have faced missile attacks, which "didn't stop us from evacuating children" as the city was struck, she said.

"It just demonstrated that you cannot be safe anywhere in Ukraine. And regardless where the children are, they are to be taken out-of-country for the reason of safety," she said.

Nogovitsyna hailed the parents, saying they are "resolved to save their children" and are bravely facing the "double threat" of not only dealing with their child’s cancer diagnosis but also knowing their lives could be lost due to the interruption of treatment or being fatally wounded by Russian bombing.

A team of psychologists, volunteers and international partners such as St. Jude’s Children’s Research Hospital are assisting and providing updates to families in Ukraine as children are transported to care centers in other nations, she said.

Her organization has received guarantees from the hospitals abroad that the children may remain throughout their treatment even if the war ends soon, she said. And rebuilding collapsed health care systems would be the next step.

“As soon as Ukraine wins this war and the peace is restored, we want to rebuild the Ukrainian pediatric oncology service,” Nogovitsyna said, “and make it even better than it used to be before the war.”