Ukrainian President Volodymyr Zelensky told CNN that Ukraine is not willing to give up territory in the eastern part of the country to end the war with Russia, and Ukraine's military is prepared to fight Moscow's military in the Donbas region in a battle he says could influence the course of the entire war.

Zelensky said in an exclusive interview Friday with CNN's Jake Tapper from the office of the president in Kyiv that his country has no guarantee that Russia wouldn't try again to seize Kyiv if it is able to capture Donbas.

"This is why it is very important for us to not allow them, to stand our ground, because this battle ... it can influence the course of the whole war," Zelensky said.

"Because I don't trust the Russian military and Russian leadership," he continued. "That is why we understand that the fact that we fought them off and they left, and they were running away from Kyiv -- from the north, from Chernihiv and from that direction -- it doesn't mean if they are able to capture Donbas, they won't come further towards Kyiv."

Some more context: It is more than seven weeks into Russian President Vladimir Putin's attack on Ukraine. Ukraine's military has seen successes resisting Russia's offensive that have come as a surprise to US intelligence -- and a Kremlin that had planned for a quick and decisive victory.

Ukrainian soldiers surrounded in the devastated southeastern city Mariupol have refused Russia's demand to surrender "in order to save their lives" and continued fighting, according to the Russian Ministry of Defense.

Wearing a shirt decorated with the Ukrainian flag in the shape of a heart, Lyudmyla Kichenok practiced her serve with teammate Dayana Yastremska in an empty arena under the watchful eyes of their captain Olga Savchuk on Thursday.

In Asheville, North Carolina, the Ukrainian women's tennis team is in the midst of their match against Team USA for the Billie Jean King Cup qualifiers.

Meanwhile, bombs rain down on their hometowns as war rages on in Ukraine.

"I feel like we have two different realities right now. The tennis court, an amazing atmosphere, amazing arena here. And then on the other side, we have people dying every day," Katarina Zavatska told CNN Sport. 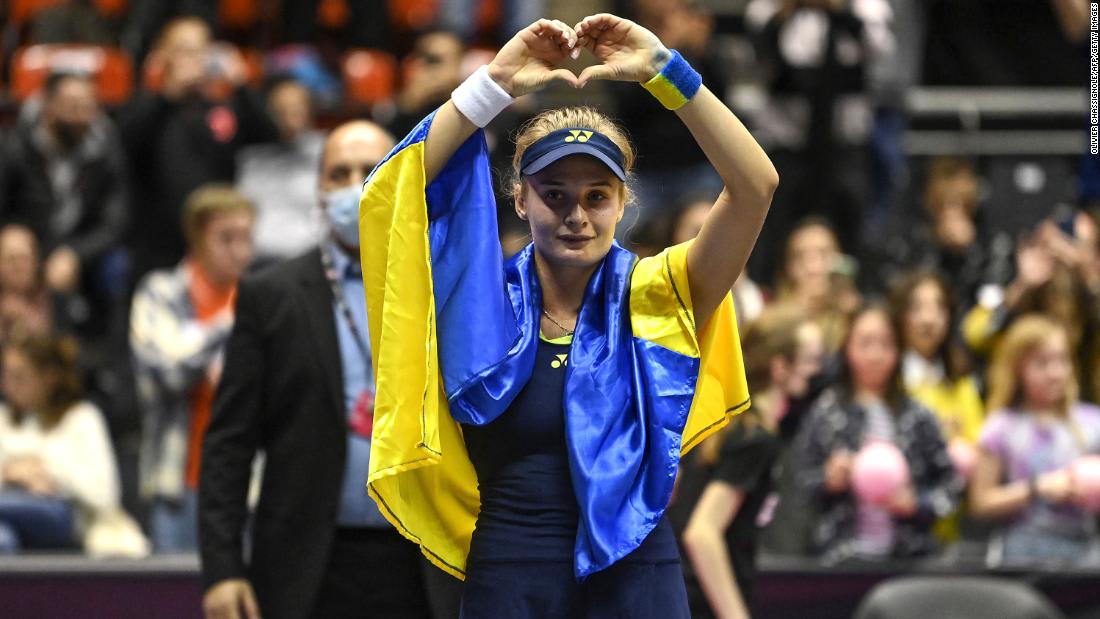 Pope Francis on Sunday said the world is marking an “Easter of war,” and called for peace in Ukraine, which he said has been dragged into a “cruel and senseless war.”

“We have seen all too much blood, all too much violence. Our hearts, too, have been filled with fear and anguish,” the Pope said while delivering his annual "Urbi et Orbi" Easter blessing, adding “our eyes, too, are incredulous on this Easter of war.”

"May there be peace for war-torn Ukraine, so sorely tried by the violence and destruction of the cruel and senseless war into which it was dragged. In this terrible night of suffering and death, may a new dawn of hope soon appear! Let there be a decision for peace. May there be an end to the flexing of muscles while people are suffering,” Pope Francis said from the balcony of St. Peter's Basilica after Easter Mass.

Around 100,000 people attended the Pope’s Easter Mass in St. Peter’s Square and nearby areas, according to the Vatican's press office.

Among them were several Ukrainian politicians, including Ivan Fedorov, the elected mayor of the occupied Ukrainian city of Melitopol who was detained by Russian forces last month and accused of terrorism offenses.

“I hold in my heart all the many Ukrainian victims, the millions of refugees and internally displaced persons, the divided families, the elderly left to themselves, the lives broken and the cities razed to the ground. I see the faces of the orphaned children fleeing from the war,” Pope Francis continued.

The Pope also highlighted acts of charity amid the “pain of war," such as “the open doors of all those families and communities that are welcoming migrants and refugees throughout Europe.”

Three sappers -- or military engineers -- from Ukraine’s State Emergency Service were killed and four others seriously injured while removing cluster munitions in the northeastern Kharkiv region on Sunday, according to the head of the regional administration.

Separately, three civilians were killed and dozens were wounded in shelling by Russian troops in the last 24 hours in the region, the head of the Kharkiv Regional Military Administration, Oleg Sinegubov, wrote on a verified Telegram page on Sunday.

"They are currently receiving treatment in the hospital. 31 people were injured in Russian shelling, including four children,” Sinegubov said.

Kharkiv, Ukraine's second largest city, has been subjected to intense bombardments throughout the past weeks of conflict.

According to Sinegubov, Russian forces have fired 23 artillery, mortar and cluster shells in the areas of Northern Saltivka, Pyatihatki, Oleksiyivka, the city center, Kharkiv Tractor Plant and Dergachi. There was also one missile strike in the area.

"The enemy cannot approach Kharkiv as our armed forces are holding strong positions and are even advancing in some directions. Therefore, Russians resort to shameful shelling of residential neighborhoods," he said.

He appealed to people not to go out unnecessarily and to comply with limits on the number of people allowed to stay in one place.

Before Russia’s war on Ukraine began, Kira Obedinsky was a joyful, loved 12-year-old girl. Now orphaned, injured and alone in a Russian-controlled hospital in eastern Ukraine, she has become an unwitting pawn in Moscow’s information war.

Obedinsky’s mother died when she was a baby. Her father Yevhen Obedinsky, a former captain of Ukraine’s national water polo team, was shot and killed as Russian forces fought their way into the southeastern city of Mariupol on March 17.

Days later, Kira and her father’s girlfriend tried to flee the city on foot alongside neighbors. But after she was injured in the blast from a landmine, Kira was taken to a hospital in the Donetsk region, which is controlled by Moscow-backed separatists.

Now Kira’s grandfather, Oleksander, fears he will never see her again. He said an official from the breakaway government in Donetsk phoned and invited him to travel there to claim her, which is impossible because of the war.

Russian media, which has repeatedly downplayed the brutality of the conflict in Ukraine, has shown video of Kira talking happily about how she's sometimes allowed to call her grandfather.

This is “proof” that she wasn’t abducted, according to one Russian TV presenter, who dubbed the claim another “Ukrainian fake.”

Meanwhile, Oleksander has received an audio message from Kira telling him not to cry. But the young girl who has lost her family, her freedom and her home in Russia’s war, cannot stop her own tears.

Russia or die: After weeks under Putin's bombs, these Ukrainians were given only one way out

Russia's Ministry of Defense on Sunday threatened the "elimination" of resistance soldiers still fighting in the besieged southwestern Ukraine city of Mariupol as it confirmed that an ultimatum demanding their surrender had been ignored.

In a statement, it said that Ukrainian soldiers surrounded in a gigantic steelworks in the city had been urged "to voluntarily lay down arms and surrender in order to save their lives."

"However, the Kiev nationalist regime, according to the radio intercept, forbade negotiations about surrendering," the ministry claimed.

The ministry also asserted that according to Ukrainian soldiers who had previously surrendered "there are up to 400 foreign mercenaries who joined the Ukrainian forces" trapped at the steel plant, including, it said, Europeans and Canadians.

"In case of further resistance, all of them will be eliminated," it said.

The Defense Ministry claimed that dozens of military facilities in eastern Ukraine had been destroyed in the latest Russian attacks. These included fuel and ammunition depots, the ministry said, around Severodonetsk, Kremmina and other towns in Luhansk and Donetsk regions.

It also claimed that Russian air defense system had shot down 10 Ukrainian unmanned aerial vehicles in the Donbas region. 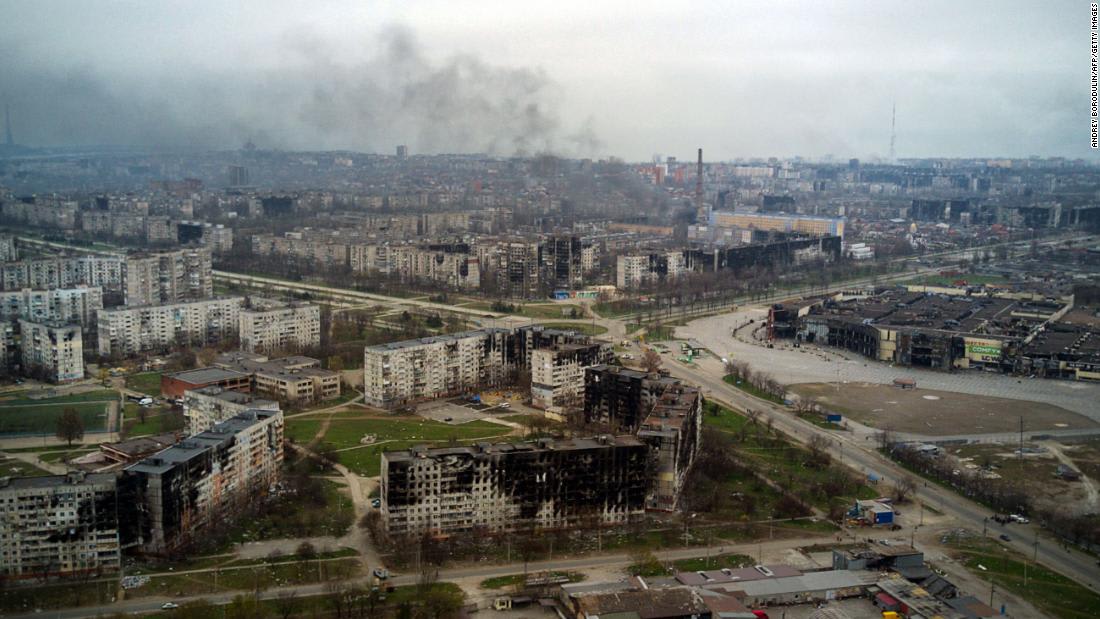 The European Union is allocating a further €50 million ($54 million) in humanitarian aid to support those impacted by Russia's invasion of Ukraine, the European Commission said Sunday.

The package includes €45 million ($48.6 million) for humanitarian projects in Ukraine and €5 million ($5.4 million) for neighboring Moldova. Neither country is an EU member state.

According to the statement, the funding will be used to “address the most pressing humanitarian needs by providing emergency medical services, access to safe drinking water and hygiene, shelter and protection, cash assistance, and support against gender-based violence.”

“With millions of people on the move or trapped in active war zones, the needs in Ukraine are already massive. Now, we need to be prepared for a further increase in Russia's ruthless attacks on Ukraine, notably in the east,” the EU's commissioner for crisis management, Janez Lenarčič, said.

“[The money] will help people in hard-to-reach areas who are cut off from access to healthcare, water and electricity, and those, who have been forced to flee and leave everything behind," he said, adding:

Ukraine, we are with you."

This funding is part of the €1 billion ($1.08 billion) support package pledged by the European Commission earlier this month.

Late Saturday, the Russian Defense Ministry laid down conditions for the surrender on Sunday of the remaining Ukrainian soldiers in Mariupol -- an ultimatum rejected by officials in the city.

Serhii Haidai, the head of Luhansk regional military administration, said that people should leave even though there were no official humanitarian corridors.

He urged people to "evacuate to the safe regions of Ukraine to survive and not to become a cheap labor for the Russians."

He said attempts would be made to evacuate civilians from Severodonetsk, Lysychansk, Rubizhne, Popasna, and the Hirske community -- all places that have seen widespread devastation in recent weeks.

Haidai also accused the Russians of bombing despite agreed ceasefires to allow for evacuation:

"Knowing that many people daily evacuate from Lysychansk, yesterday Russians deliberately hit the city center during a ceasefire regime that was agreed upon at the highest levels."

He also repeated an allegation made by other Ukrainian officials in recent weeks, saying that Ukrainians "from the occupied part of Rubizhne and other cities are being forcibly deported to remote regions of Russia, where cheap labor is needed."

CNN has been unable to confirm the scale or details of forced deportations of Ukrainian civilians to Russia. 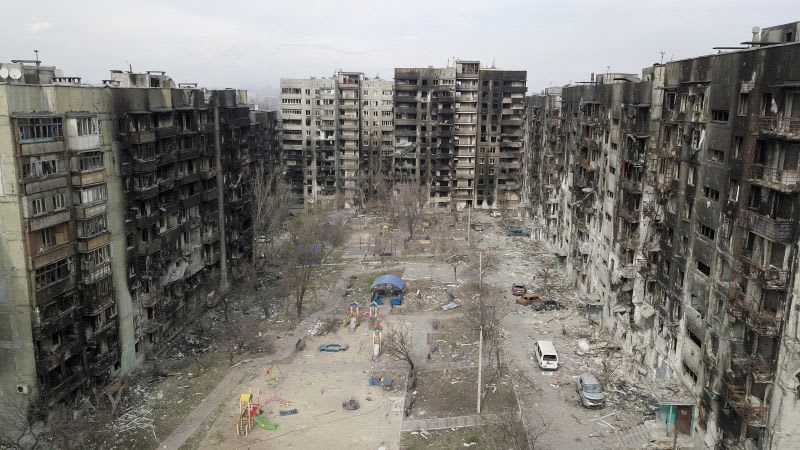 Russia or die: After weeks under Putin's bombs, these Ukrainians were given only one way out | CNN