Russia this week formally protested the US’ ongoing shipment of weapons to Ukraine, sending a diplomatic note to the State Department warning of “unpredictable consequences” should the support continue, according to two US officials and another source familiar with the document.

The note, known as a démarche, was sent earlier this week as the administration was preparing to announce that it would be sending a new military aid package worth $800 million to the Ukrainians. The Washington Post first reported on the document.

The US has for the first time agreed to provide Kyiv with the types of high-power capabilities some officials in US President Joe Biden's administration viewed as too much of an escalation risk a few short weeks ago, including 11 Mi-17 helicopters, 18 155 mm Howitzer cannons and 300 more Switchblade drones.

A source familiar with the Russian diplomatic note said it was expected that Moscow would protest the shipments, and it was still unclear whether it means Russia will change their behavior in any way. But this person acknowledged that it could signal a more aggressive Russian posture against the US and NATO as the war drags on.

CNN previously reported that the United States believes Russian President Vladimir Putin’s risk tolerance has increased, and that he may be willing to take more aggressive action against the US in response to its support for Ukraine.

Asked for comment, a US official said “we won’t confirm any private diplomatic correspondence. What we can confirm is that, along with Allies and partners, we are providing Ukraine with billions of dollars worth of security assistance, which our Ukrainian partners are using to extraordinary effect to defend their country against Russia's unprovoked aggression and horrific acts of violence.”

Referring to the formal protest from Moscow, one administration official told CNN the Russian notice indicates how effective the US weapons shipments to Ukraine have been. The official suggested the Russians were also concerned by the latest announcement, which includes more sophisticated and heavier-duty weaponry.

Col. Oleksandr Motuzianyk, a spokesperson for the Ukrainian Ministry of Defense, said Friday that Russian long-range bombers struck the besieged city of Mariupol.

"On April 14, two Russian strategic heavy bombers Tu-95/-160 have launched cruise missiles hitting the territory of Ukraine from Krasnodar Krai of Russian Federation airspace," he said. "Also for the first time from the start of the armed aggression bombs were dropped by a long-range bombers Tu-22M3. This airstrike took place, hitting Mariupol."

A spokesperson for the Ukrainian Armed Forces in southern Ukraine suggested that Russian missile attacks in the south since Thursday night were in retaliation for the sinking of the Russian cruiser Moskva.

Natalia Humeniuk said the attack had "affected not only [Russia's] ships, but also the enemy’s imperial ambitions."

She told a media briefing Friday that after the attack on the Moskva, "we all realize that we will not be forgiven."

Ukraine said two of its anti-ship missiles hit the Moskva, while the Kremlin has said only that a fire on board led to the eventual capsizing of the flagship of its Black Sea fleet.

Humeniuk said that "when the ammunition detonated, that showed they had been loaded enough to keep destroying Ukraine. ...The impact led to the detonation of ammunition, they started struggling for survival."

"We saw other ships try to help the cruiser, but even the nature was on Ukraine’s side, because the storm did not allow to carry out either a rescue operation or evacuate personnel," she continued.

Humeniuk referenced Russian missile attacks in the south since Thursday night after the Moskva attack.

"Currently there is an attack in Mykolaiv. We see that this is again the use of cluster munitions prohibited by international conventions," she said.

A CNN team in Mykolaiv Friday heard multiple rounds of explosions in the morning between 10:20 a.m. and 12 p.m. local time. At least two people were killed in front of an Orthodox church in the city.

Humeniuk said that the situation in Mykolaiv and Kherson regions "is characterized by the fact that the enemy uses its brutal manners in the placing of equipment and units in-between the local civilians and the civilian infrastructure like schools, kindergartens, hospitals, and the yards of local residents."

"Then at night they disappear from these positions, leave the villages and shell them, while accusing the Ukrainian Armed Forces of shelling civilians," she said.

"Such actions are conducted in order to justify their status of liberators in the occupied territories," she added.

"We realize that attacks on us will increase, that the enemy will try to take revenge," Humeniuk said. "We are ready, we are resisting."

At 10:30 a.m. local time last Friday, as many as 4,000 people in and around the train station in Kramatorsk were waiting to be evacuated when a missile exploded overhead, raining down chunks of metal. Shrapnel ripped through the crowd, which was largely composed of women, children and the elderly. The latest death toll is more than 50, with more than 100 injured.

When we visited the station 48 hours after the blast, we found the concourse still stained with blood, littered with the scattered possessions of the dead and wounded.

On one platform, we found a large pool of congealed blood in a shrapnel impact point with several false teeth nearby. Someone, probably an elderly person, must have been hit and killed there.

City officials believe Kramatorsk could be surrounded, besieged and pulverized by Russian forces if and when the much-anticipated offensive in the east gathers pace.

The mayor had been urging residents to leave, and prior to last Friday's strike around 8,000 people a day were boarding westbound trains. The evacuation effort had been publicly announced, with people from surrounding towns and villages urged to gather at the railway station in Kramatorsk, which was the major regional hub. There was nothing secret about it.

Russia has denied targeting the station, claiming the missile — a Tochka-U — is no longer used by Russian forces, and alleging that it was a Ukrainian missile that hit the station. Military analysts dismiss the claim.

Part of the missile crashed into a small park in front of the station. Someone, somewhere wrote on it in Russian "for the children."

While tagging and writing slogans on missiles, bombs and shells is a very old tradition, it is not for certain what the intended message was.

Read more about what CNN journalists have witnessed in Ukraine here: 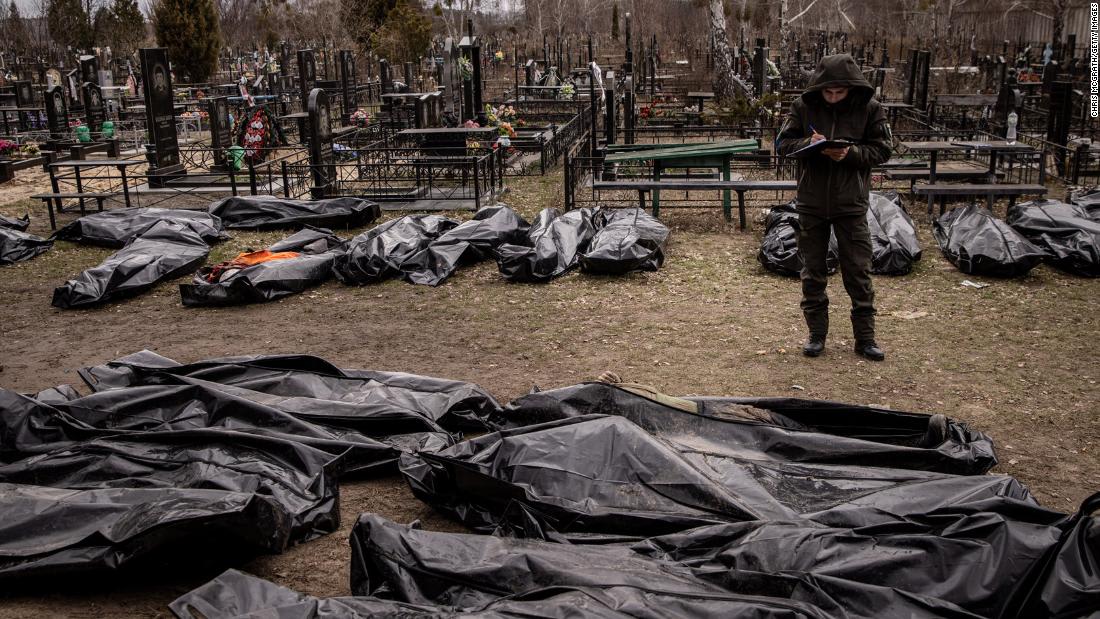 Atrocities are piling up across Ukraine. CNN witnessed some of the horrors.

Russia has struck what it described as a "military facility" on the outskirts of Kyiv, amid fears that Russia could retaliate following the sinking of its Moskva warship in the Black Sea.

Ukrainian President Volodymyr Zelensky praised the bravery of all Ukrainians who had defended the country in his latest video address, published on Thursday.

Meanwhile, Western officials have said there is no short-term end in sight to the war in Ukraine, adding that it could last through to the end of 2022.

The Russian language website of the independent Moscow Times news outlet has been blocked by the Russian state communications watchdog Roskomnadzor, the outlet said in a statement Friday.

"Russia blocked The Moscow Times' Russian language service on Friday after it published what authorities call a false report on riot police officers refusing to fight in Ukraine," the outlet said in a statement on its English website, which hasn't been affected.

"A tracking tool first detected access disruptions to the domain name themoscowtimes.com/ru from within Russia earlier in the day," it said.

The Moscow Times said its Russian website was among dozens of domestic and foreign websites to have been blocked since Russia’s invasion of Ukraine on February 24.

Some context: In March, Ukrainian President Volodymyr Zelensky accused Russia of being "frightened" by journalists "who can tell the truth" after the Kremlin attempted to prevent Russians seeing an interview he gave about the war in Ukraine.

"[They] destroyed freedom of speech in their state — [and are] trying to destroy the neighboring state. They portray themselves as global players. And they themselves are afraid of a relatively short conversation with several journalists," he said during a video address.

"Well, if there's such reaction — then we are doing everything right. [It] means they are nervous," added Zelensky.

Kremlin spokesperson Dmitry Peskov told CNN at the time that Russia was not afraid, saying there were "laws in ​place, and it is very important not to publish information that would amount to a violation of these laws." 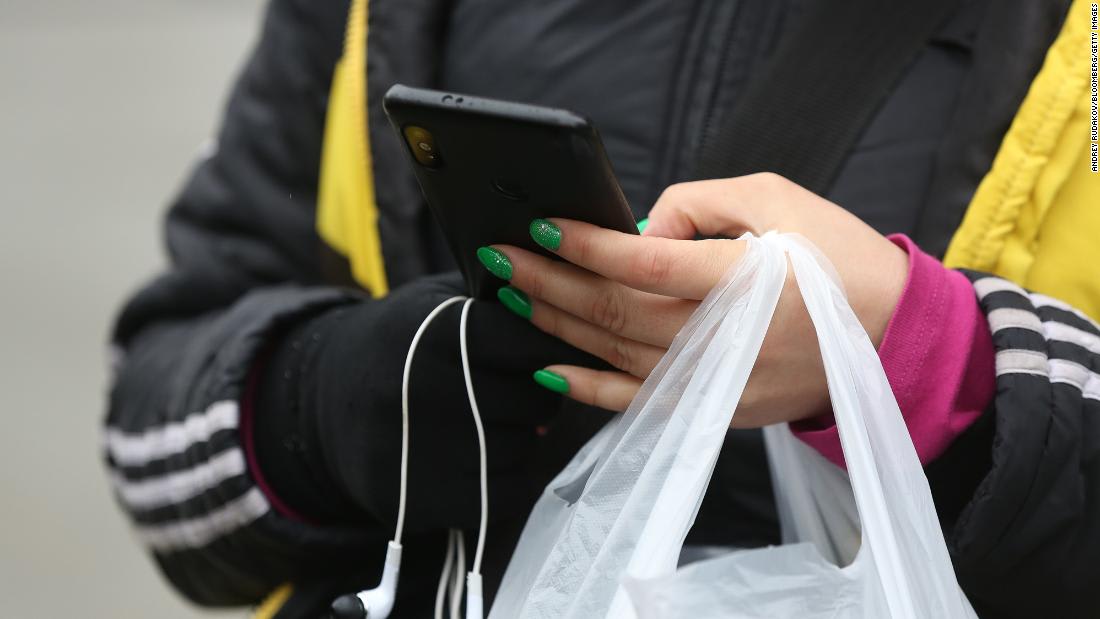 Why Russia might struggle to maintain its digital iron curtain

At least two people were killed in multiple attacks on the southern Ukrainian city of Mykolaiv, a regional military official told CNN.

Dmytro Pletenchuk, the Mykolaiv military administration press officer, said an unspecified number of people were also injured in the shelling.

A CNN team heard multiple rounds of explosions in the morning between 10:20 a.m. and 12 p.m. local time. The two people were killed in front of an Orthodox church, and the CNN team witnessed the clean-up of blood and debris. Sirens continued to sound in the city.

Hanna Zamazeeva, the head of the Mykolaiv regional council, said in a statement on Telegram that Russian forces were hitting residential quarters of Mykolaiv.

"There are no military facilities there!" she said. "PEACEFUL residents come under fire!"

Zamazeeva said one of the districts of the city was hit by fire from a multiple rocket launcher and warned residents to remain in shelters.

Another 27 people were wounded as the buses travelled near the village of Borova, close to the contested city of Izium, the office added.

"A pre-trial investigation has been launched into violations of the laws and customs of war combined with premeditated murder," the office said.

Ukrainian President Volodymyr Zelensky praised the bravery of all Ukrainians who had defended the country in his latest video address, published Thursday -- the 50th day of the Russian invasion.

Zelensky then made an apparent reference to the Russian guided-missile cruiser Moskva, which sank off the coast of Ukraine in the Black Sea on Thursday.

"Those who have shown that Russian ships can go... [Zelensky pauses instead of saying an expletive associated with Russian ships since an incident earlier in the war, then continues] to the bottom only."

Moskva was one of the ships involved in the famous exchange at Snake Island in February, which saw Ukrainian soldiers on the tiny Black Sea island react with defiant words when threatened with bombing by approaching Russians.

According to a purported audio exchange, one of the Ukrainian troops had responded to a warning from an approaching Russian vessel to lay down their weapons or face bombing by saying, "Russian warship, go f*** yourself."

In his address, Zelensky added that by destroying civilian infrastructure, Russia had shown "how absurd" the invasion is, because along with destroying Ukrainian cities it is also destroying Russia's standing in the world.