The death toll from a missile strike on a train station in Kramatorsk, Ukraine, has risen to 50, said Pavlo Kyrylenko, the head of Donetsk region military administration.

In an update on Telegram, Kyrylenko said 50 people had died, five of whom were children, adding that 12 of the victims died after being taken to the hospital.

"We have such a large number of victims at this hour as a result of the attack of the Russian occupation forces Tochka-U [ballistic missile] on the Kramatorsk railway station," he said. "At that moment, 98 people have been taken to hospitals. We expect that other victims will seek medical help within one or two days, so the number of victims will be constantly changing."

Of the 98 wounded who were taken to medical facilities, 16 were children, 46 were women and 36 were men, Kyrylenko said.

In an earlier statement on Telegram, Kyrylenko had said the station was struck by an Iskander missile. This latest statement updates that a Tochka-U missile was used. 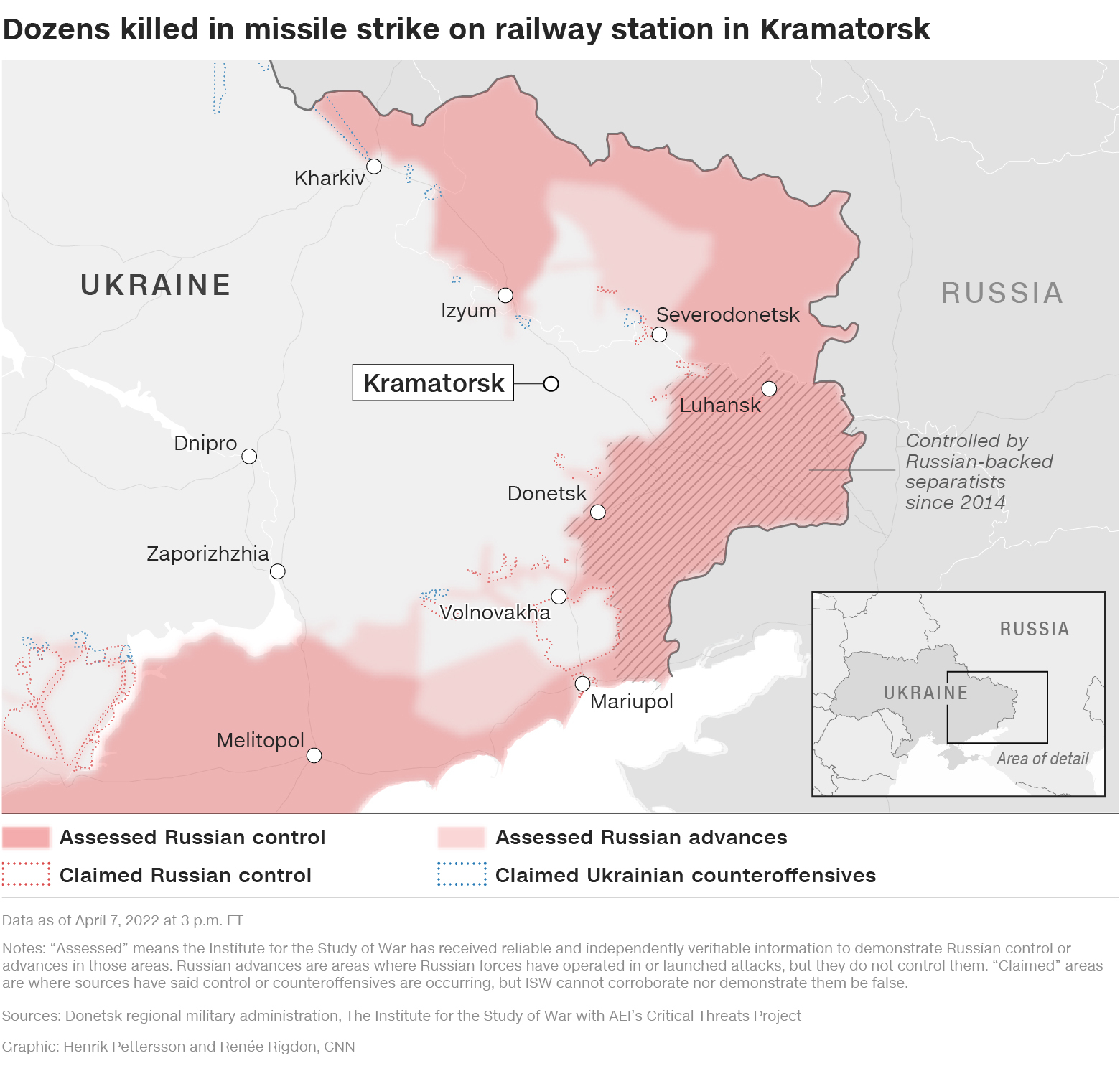 A new government campaign launched in Belgium is encouraging citizens and households to reduce their energy consumption to “be smart with energy and help Ukraine.”

“Smart use of energy is good for your wallet, it helps us to become less dependent on Russia and it is good for the climate,” Belgian Energy Minister Tinne Van der Straeten said in a statement announcing the initiative.

The initiative will run for five weeks online and on all Belgian radio stations.

Campaign materials published on a dedicated website offered “five simple tips will help you save energy in the short term, without losing comfort.”

The tips include turning down the thermostat by one degree, check the energy rating on home appliances such as refrigerators and freezers, leave the car at home more often and consider using a microwave to re-heat food as – according to the campaign — it uses 4 times less energy than a stove or oven.

Van der Straeten also asked Belgians to prepare for the winter: “Belgian homes consume almost the most energy in all of Europe,” she said urging citizens to invest in better insulation, solar panels, heat pumps and solar water heaters.

To “set a good example,” the Belgian government is also reducing heating in all federal buildings by one degree a statement from Mathieu Michel, Belgium’s state secretary said.

Belgium imports 30% petroleum, 20% uranium and up to 6% natural gas from Russia according to figures of the country’s energy ministry.

Minister Van der Straeten reiterated that there is no problem in terms of supplies to Belgium, but “no one can predict how the conflict will evolve, but we can prepare now.”

Other European countries such as France and Germany have also taken measures to reduce their energy dependency.

The head of Ukraine's state-owned railway company said one of the two strikes carried out by Russia on Friday fell down on an area adjacent to the Kramatorsk station, and “all of the people that were around and inside were hit by the pieces of the rocket."

The station building itself was “also shelled” and “broken,” said Oleksandr Kamyshin, the head of Ukrainian Railways.

Russian forces “keep shelling all the stations, all the railway infrastructure” on a “daily basis” and are doing “whatever they can to stop the evacuation program of civilians,” Kamyshin said Friday.

He added that Russian forces also bombed a bridge in the area on Thursday.

He told CNN at least 39 civilians had been killed and 87 injured by Russian shelling at the train station in the eastern Ukrainian city of Kramatorsk. Earlier Friday, the Donetsk regional police said around 30 people were killed and 100 injured.

“This case shows that they tried to kill civilians,” Kamyshin added.

The package includes an import ban on all forms of Russian coal. This affects one fourth of all Russian coal exports, amounting to around 8 billion euros in loss of revenue per year for Russia, according to the European Commission.

The EU source said that the ban will not be immediate but rather a gradual phase out. There will be “a four-month wind-down period,” according to the source.

The package also includes the closing of EU ports to Russian vessels and a ban on exports of high-tech products to Moscow.

Further details about the package are expected to be released later today in the Commission’s official journal.

Ukrainian President Volodymyr Zelensky told Finland’s parliament on Friday that a “sanction cocktail, that would be remembered just like Molotov cocktails” is needed to halt Russian aggression.

Zelensky asked Finland to “show even more leadership” in the European Union, saying this will be “the biggest contribution in the security of Europe.”

He said that Ukraine needs weapons “that some of the EU partners have,” as well as “powerful efficient sanctions against Russia on a permanent basis.”

“We need to think about how to protect Europe from the Russian energy weapon,” Zelensky continued. “How much longer can Europe ignore the introduction of embargo against oil supplies from Russia?”

Ukrainian President Volodymyr Zelensky said Friday about 30 people have been killed in a missile strike at a railway station in the eastern city of Kramatorsk, and claimed nearly 300 have been wounded.

In an address to Finland’s parliament on Friday, Zelensky said the “Russian military hit the railway terminal,” adding “there are witnesses, there are videos, there are remnants of the missiles and dead people.”

He described the railway terminal as an “ordinary” and “rank-and-file,” with “people crowded waiting for the trains to be evacuated to the safe territory.”

“Why do they need this war against Ukraine? Why do they need to hit civilians with missiles? Why this cruelty that the world has witnessed in Bucha and other cities liberated by the Ukrainian army?,” Zelensky asked.

Whilst saying that those “fighting for freedom” should be supported, Zelensky added that “ordinary people understand these things and this concept more than some influential leaders. Smaller countries understand it better than some of the bigger countries.”

Friday’s virtual address to the Finnish parliament was Zelensky’s twenty third address to a foreign parliament since Russia invaded Ukraine.

The Russian Ministry of Defense issued a statement Friday calling the missile strike on a railway station in the Ukrainian city of Kramatorsk a "provocation."

The statement mirrored recent denials of the indiscriminate killing of civilians in the Kyiv suburb of Bucha.

"All the statements of representatives of the Kyiv nationalist regime about the alleged 'missile attack' by Russia on April 8 at the railway station in Kramatorsk are a provocation and absolutely do not correspond to reality," the statement said.
"On April 8, the Russian armed forces did not conduct or plan any artillery fires in the city of Kramatorsk.
"We emphasize that the Tochka-U tactical missiles, the wreckage of which was found near the Kramatorsk railway station and published by eyewitnesses, are used only by the Ukrainian armed forces."

Ukrainian forces have the Soviet-designed Tochka missile in their inventory but it has also been used by Russian and separatist forces in the past. 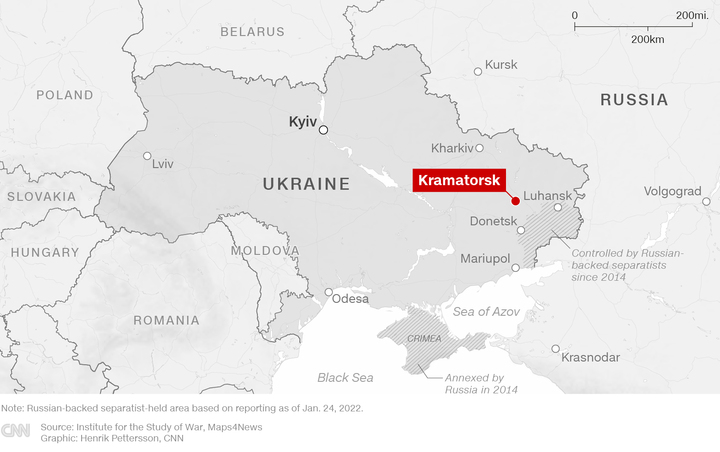 Russia's military and senior officials have issued blanket denials of attacks against civilians, most recently claiming -- without evidence -- that the massacre of civilians in the Kyiv suburb of Bucha was staged.

The killing of civilians during the Russian occupation of the town has been extensively documented.

At least 30 people, including two children, were killed after Russian forces carried out a missile strike on a railway station in eastern Ukrainian city of Kramatorsk, according to authorities.

Local police said in a statement that the rockets struck a temporary waiting room, where "hundreds of people were waiting for the evacuation train."

Some 8,000 people per day were going to the station to evacuate during the last two weeks and as many as 4,000 people were there when the missile struck, according to the mayor of Kramatorsk.

"This is another proof that Russia is brutally, barbarically killing the civilian Ukrainians, with one goal only -- to kill," the mayor said in a statement.

The attack comes as Russian forces are preparing for a massive operation in eastern Ukraine to take the contested region of Donbas, Ukrainian authorities say. 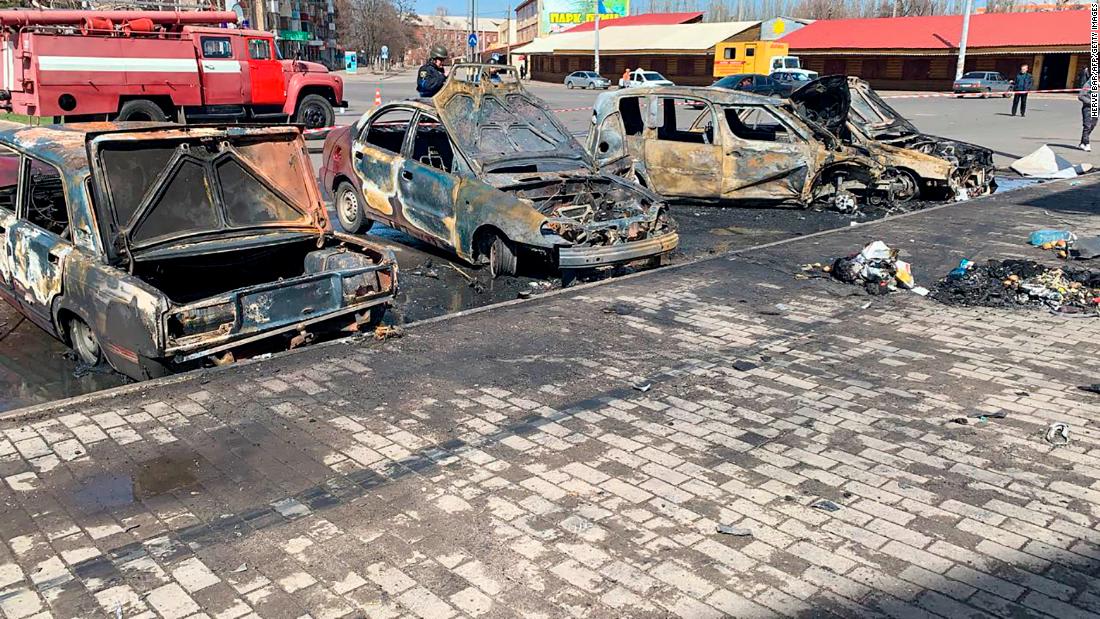 A Nobel Peace Prize-winning newspaper editor says he was attacked with red paint while traveling on a train in Russia.

Dmitry Muratov, editor-in-chief of the independent Russian investigative newspaper Novaya Gazeta, said he was attacked on Thursday during a train ride from Moscow to the city of Samara, when an unidentified individual poured red paint all over him and his belongings.

Muratov, who won last year's Nobel Peace Prize for his tireless defense of freedom of speech in Russia, told CNN earlier this week that half the country's population was against the war in Ukraine.

In a post on Telegram on Thursday, Muratov said: "They poured oil paint with acetone in the compartment. My eyes burned terribly. Moscow-Samara train. Oily smell all over the car. Departure has already been delayed by 30 minutes. I'll try to wash off. (The attacker) shouted: 'Muratov, here's to you for our boys.'"

A spokeswoman for the newspaper told CNN that Muratov's eyes "seem to be ok."

Last month, the Russian journalist also said he will auction off his medal to support Ukrainian refugees. 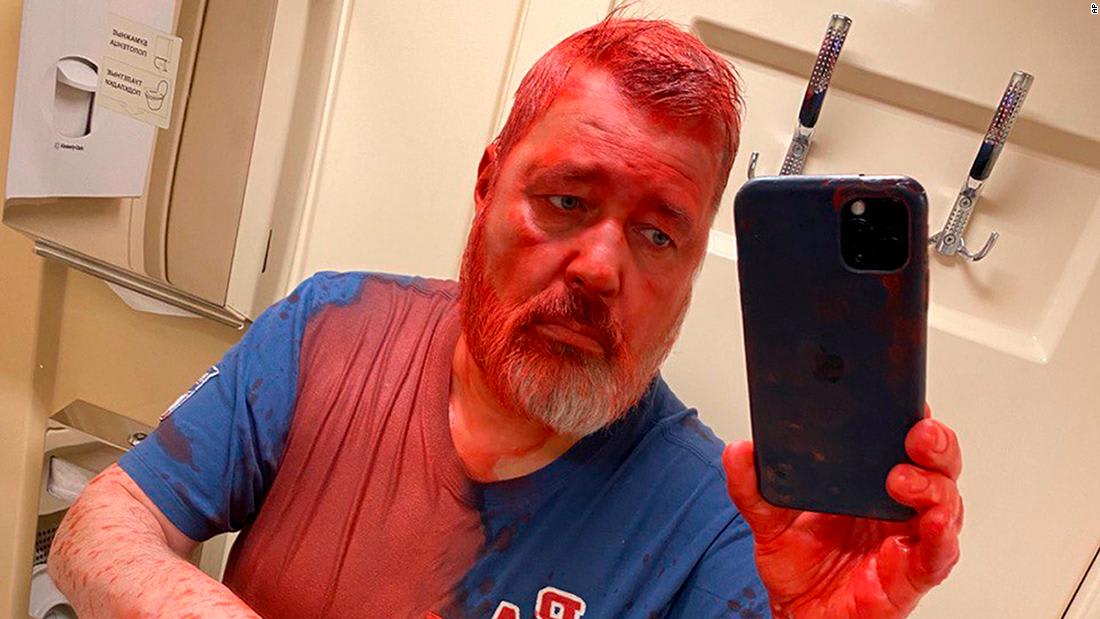