"It's very difficult to negotiate when you see what they have done here," the president emphasized as he stood in the town, surrounded by security.

He warned that "the longer the Russian Federation delays" talks with Ukraine the worse the situation becomes.

Wearing a flak jacket and surrounded by security, he talked about “key leaders of leading countries who made the decisions whether Ukraine should be a NATO member.”

“I think they should come here and see how these games, how this flirting with the Russian federation ends,” he said.

The European Union on Monday announced it has established a joint investigation team with Ukraine to probe alleged Russian war crimes and crimes against humanity after shocking images emerged from the town of Bucha in the aftermath of Russian forces withdrawing from the area.

EU Commission President Ursula von der Leyen offered Ukrainian President Volodymyr Zelensky her condolences on the “dreadful murders” that were revealed over the weekend in what she described as “harrowing mages” in a news release.

“The EU is ready to reinforce this effort by sending investigation teams on the ground to support the Ukrainian Prosecution Services. Eurojust and Europol are ready to assist,” she said.

“A global response is necessary. There are ongoing talks between Eurojust and the International Criminal Court to join forces and for the Court to be part of the Joint Investigation Team. Such a coordinated approach from the Ukrainian authorities, the EU, its Member States and agencies, and the International Criminal Court will allow for the evidence to be collected, analysed and processed in the most complete and effective way possible.

“I have tasked Justice Commissioner Didier Reynders to follow-up and take contact with the Ukrainian Prosecutor General.

“The Commission will provide all the necessary technical and financial support to all EU-led investigations," she said.

Ukrainian man Dmytro Lisovyy was sheltering in the basement of his Bucha home for two weeks as the Russians attacked "every day and every night" nearby.

Russian troops were "present on the streets. Maybe from the fourth or fifth day, they decided to check all houses. They came to our house. They destroyed all of the electronic devices inside our house, including laptops, including TV and so on," Lisovyy told CNN.

As the troops tried to find smartphones, Lisovyy said his family hid their current phones and gave up their old ones.

"As a result, we have some connection with the world. We understand what is going on and what could be time for evacuation," he said.

Lisovvy also spoke of the horror of living through this time.

"It was horrible to understand that every minute that something could fly into your house. Also, just could come and kill someone or destroy some of your things," he said.

Eventually, he and his family decided to take the risk and use an evacuation route to escape.

The territory was "all controlled by Russian troops. There were many civilian cars destroyed by Russians during our evacuation. We saw it. They were shooting. It was civilian cars — not some other troops or something," he said speaking of the risk his family took to escape.

They are now safe and Lisovyy spoke to CNN from Kyiv. However, many of his friends still remain in Bucha.

"My friends, unfortunately, [are] still in this area without any connection for a long time. No one knows if they survived or if they are OK," he said.

The US will ask the United Nations to suspend Russia from the Human Rights Council, US Ambassador Linda Thomas-Greenfield said Monday their participation is "a farce."

According to a tweet by US mission spokesperson Thomas-Greenfield, “in close coordination with Ukraine, European countries and other partners at the UN, we are going to seek Russia’s suspension from the UN Human Rights Council.”

“I am returning to New York to do two things. One: I will take this to the Security Council tomorrow morning and address Russia’s actions directly," she wrote.

“Russia’s participation on the Human Rights Council is a farce. It hurts the credibility of the Council and the UN writ large. And it is wrong, which is why we believe it is time the UN General Assembly vote to suspend them,” Thomas-Greenfield said. 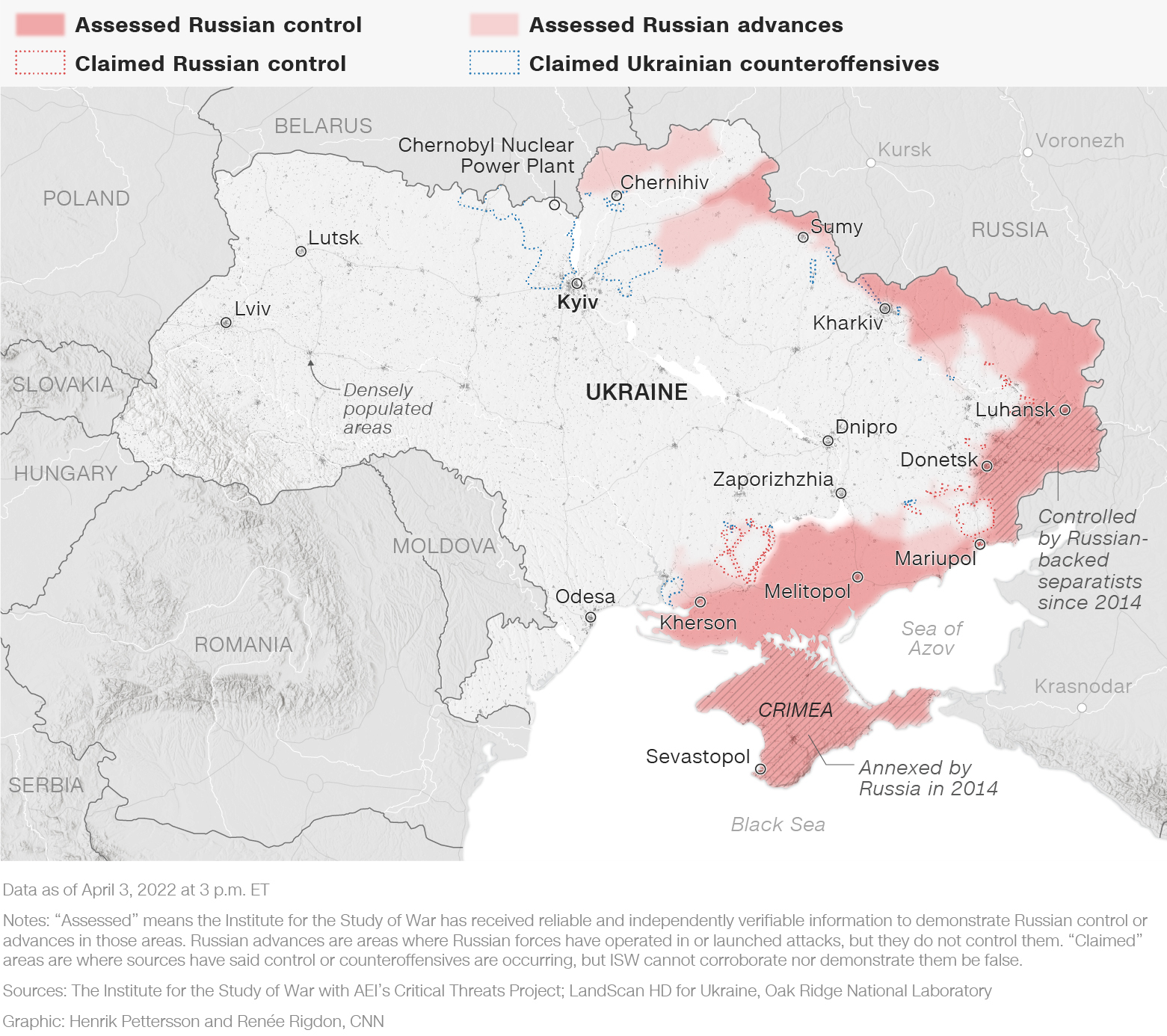 In Bucha, northwest of the capital, images show civilian bodies found strewn across a street, and CNN reporters observed a mass grave in the town, with the mayor saying there could be hundreds of victims buried on site.

Bucha: Shocking images from the town recently liberated from Russian forces have sparked international outrage. The Kremlin questioned the reports regarding Bucha on Monday, rejecting all accusations of Russian military involvement. Ukrainian Foreign Minister Dmytro Kuleba has called on the International Criminal Court to investigate the killings while Zelensky described it as “genocide.” 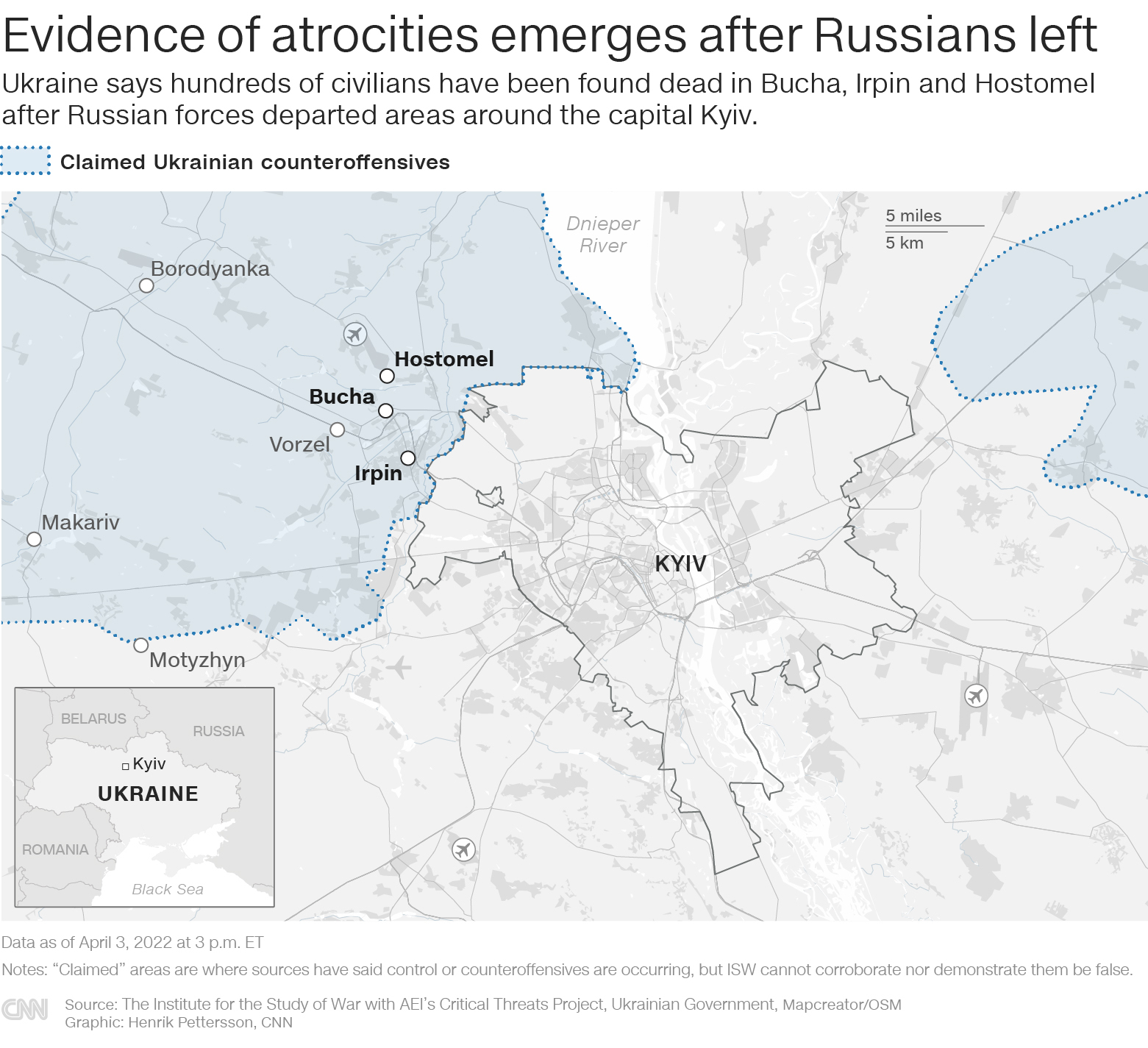 Global condemnation: Greece joined a host of countries in denouncing the atrocities in Bucha. In a statement posted online on Sunday, the Greek Ministry of Foreign Affairs described scenes in Bucha as “horrific crimes” and called for those responsible to be held accountable. Polish Prime Minister Mateusz Morawiecki also called for an "independent commission" to investigate Russian war crimes in Ukraine as world leaders continue to condemn the massacre.

Russia sanctions: French President Emmanuel Macron said he wants to see a total block on Russian exports of coal and oil to the European Union “this week," following the discovery of what he described as “very clear signs” of war crimes in Bucha. He said that he would have discussions with his European partners this week regarding further sanctions on Russia. It comes as UK Foreign Secretary Liz Truss will call for tougher sanctions against Russia, the Foreign, Commonwealth & Development Office (FCDO) said Monday. 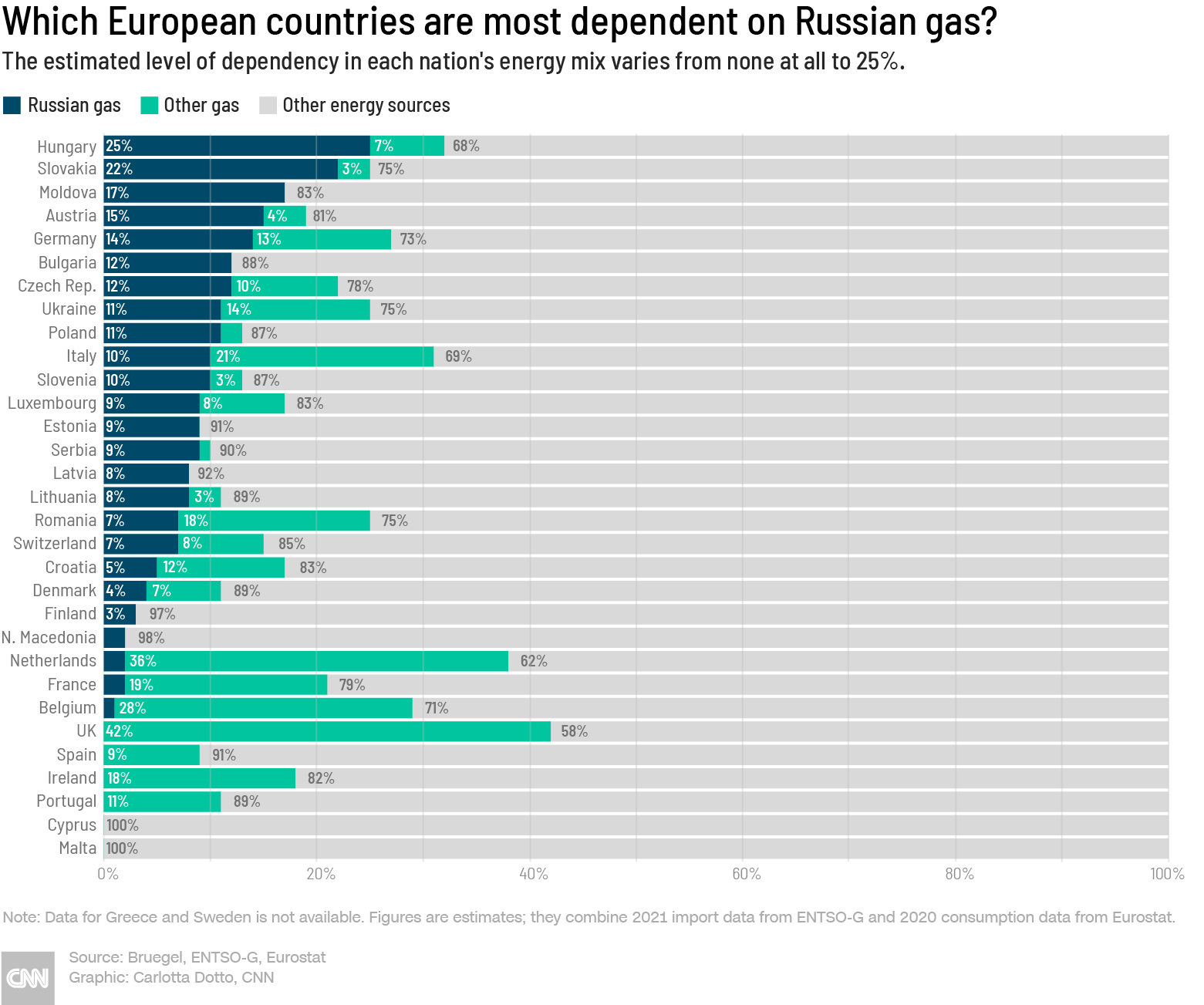 Luhansk region: Serhiy Haidai, head of the Luhansk regional military administration in eastern Ukraine, said Monday that the Russian military had been gathering a "significant accumulation of troops and military equipment" in the region, in apparent preparation for an offensive push. The Russian military has said it is pulling back its forces from around Kyiv and the northern Ukrainian city of Chernihiv to concentrate efforts in the Donbas region of Ukraine's east.

The United Arab Emirates sent a plane carrying more than 30 tons of medical and relief supplies to Ukraine, the state news agency WAM said on Sunday.

This is the third plane sent by the UAE to Ukraine, in response to the international humanitarian appeal to support Ukrainians and those displaced in Ukraine, WAM said.

The UAE, along with several other Arab countries, have not publicly condemned Russia’s invasion of Ukraine, but chose to vote in favor of last month’s UN General Assembly resolution condemning Russian aggression.

Anwar Gargash, adviser to the UAE president, said last month that taking sides "would only lead to more violence." The UAE's priority is "to encourage all parties to resort to diplomatic action and to negotiate to find a political solution," he said.

"The UAE is keen to provide the necessary relief requirements in situations of conflict for civilians, especially women and children, in the current circumstances and resulting aggravated situation, particularly for Ukrainian refugees in neighboring countries," said Salem Ahmed Al Kaabi, the Emirati Ambassador to Ukraine.

The International Humanitarian City in Dubai, in cooperation with international organizations in the city, had previously operated two other planes carrying 124 metric tonnes (136 tons), including relief supplies and shelter equipment, WAM said.

The Gulf country had also pledged $5 million in humanitarian assistance.

Germany would face a "substantial recession" if supplies of Russian gas stop, according to one of the country's top banking officials, Christian Sewing.

"Russia's war against Ukraine and Covid-19 is impairing​ the German economy," Sewing, president of the Association of German Banks, said in a statement Monday. "In the case of deliveries of Russian gas stopping, the situation would be aggravated. A substantial recession in Germany could be hardly avoided."

Sewing, who is also the CEO of Deutsche Bank, predicted a 2% reduction in the German economy's growth this year, adding that "substantial risks" mean the reduction may be even greater.

"Those are first of all the energy prices. They are a burden for many companies and consumers. Despite the easement measures of the German government, soaring prices or imminent bottlenecks in supplies could substantially slowdown the economy," Sewing warned.

A German government spokesperson told CNN Saturday that Russian gas is still "flowing into Germany" and that supply security is "still guaranteed" after reports emerged last week claiming that flows had stopped.

Renewed attempts by the International Committee of the Red Cross (ICRC) to reach the besieged Ukrainian city of Mariupol failed again Monday, a spokesperson told CNN.

“Due to security conditions, our team has not been able to reach Mariupol today,” they said in a statement.

The team have been trying to enter the city since Saturday to provide much needed humanitarian aid and facilitate evacuations for the civilians who remain trapped in the city, which has been a major target of Russian bombardment.

After images emerged of civilian bodies strewn across the streets of Bucha, a town near the Ukrainian capital Kyiv, mayor Anatoliy Fedoruk told CNN's New Day's Brianna Keilar via a translator this morning that "we will not forgive the Russian people for the atrocities that happened here."

He said that "half the city is destroyed" and the city is now busy "transitioning from a war footing to peacetime living."

They are working on identifying the bodies of the civilians who were shot dead, who mayor Fedoruk said "were indiscriminately killed by the Russian occupiers. A lot of them are elderly people."

"We get the impression that the Russian occupiers have got the green light from Putin and Shoigu, the Russian Defence Minister, to have a safari in Ukraine, and they weren't able to take Kyiv, so they vented their frustration on Bucha and the surrounding areas," he added.

Around 3,000 people stayed in the town, which usually has a population of around 500,000, for the month of the Russian occupation, according to the mayor who also decided to stay. They were all "witnesses to the horrific events."

Mayor Fedoruk noted that many children and teenagers were victims of the carnage, despite posing "no threat" to the Russian troops. "It was impossible not to see that they were children, not to see that a mother is carrying a child," he told CNN.

He said that we can expect to see the same picture of atrocities from Kyiv to Mariupol, everywhere where the Russian occupiers have stepped, adding that what Putin has described as "denazification" is actually the "dehumanization of Ukrainians."