The Russian-installed government in the occupied Ukrainian city of Melitopol is trying to move on with daily life as the invasion rages nearby, including restarting schools.

Russian-installed mayor Galina Danilchenko also said that power would be restored to a nearby captured Ukrainian air force base in a video message published on Melitopol's Russian-installed government's Telegram channel.

But Ivan Fedorov, Melitopol's elected mayor, claimed that to re-open the schools, the government drummed up embezzlement charges against the city's education chief, Irina Shcherbak.

Fedorov claimed that the charges were brought up because Shcherbak "refused to cooperate with them," he said on Instagram.

It's not the first time a Melitopol elected official was detained or had charges brought up against them during the Russian occupation.

When the Russians installed Danilchenko as Melitopol's new mayor on March 11, she immediately dissolved the elected government and mandated that Russian news be broadcast.

Fedorov himself was detained earlier this month by armed men and then charged with terrorism offenses by the Russian-backed rebels prosecutor's office in the Luhansk region. He was later freed as part of a prisoner swap.

Fedorov also claims on Instagram that the Russians have cut off all cell phone communications in Melitopol. Danilchenko in a video message claimed that it was the Ukrainians who had cut off communications.

Melitopol is located in southern Ukraine, between the besieged city of Mariupol and Russian-occupied Kherson. 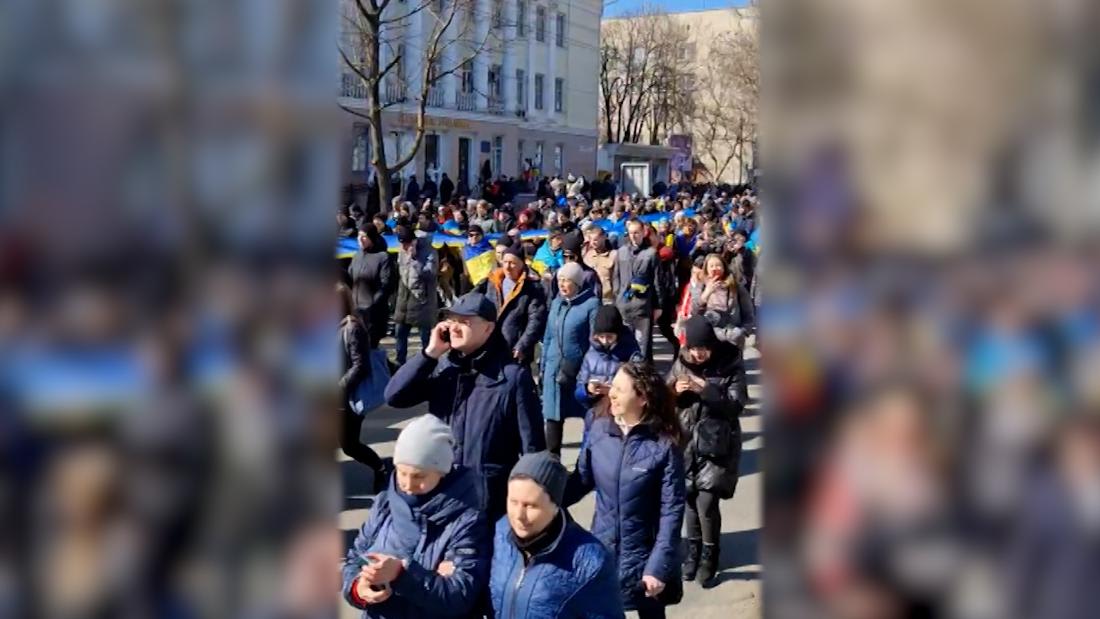 Russia is trying to install pro-Kremlin officials in occupied cities, but Ukrainians are fighting back

Russia would only use nuclear weapons when there is a threat to the country's existence — and not as a result of the ongoing war in Ukraine, Kremlin spokesman Dmitry Peskov told PBS Newshour in an interview Monday.

“Any outcome of the operation (in Ukraine), of course, is not a reason for usage of a nuclear weapon,” Peskov said. “We have a security concept that very clearly states that only when there is a threat for existence of the state, in our country, we can use and we will actually use nuclear weapons to eliminate the threat for the existence of our country.”

When asked about US President Joe Biden’s comments calling Vladimir Putin a “butcher” and declaring the Russian President should no longer remain in power, Peskov said “it is quite alarming.”

“It is personal insult,” Peskov said. “Of course, it is completely unacceptable. It is not for the United States' President to decide who is going to be and who is the president of the Russian Federation.”

Some context: At an address in Poland on Saturday, Biden made an improvised comment — "For God's sake, this man cannot remain in power" — that caught American and international officials off-guard, sending the White House into clean-up mode over the weekend.

The US officially declared last week that Russian forces had committed war crimes in Ukraine. The International Criminal Court in The Hague has also launched an investigation into the invasion.

A White House official says there are Ukrainian soldiers in Poland who are interacting on a regular basis with US troops, which is what US President Joe Biden was referring to Monday when he sought to explain a comment he made overseas indicating US troops would see Ukrainians in action.

The interaction between US and Ukrainian forces is in regards to security assistance being sent from the US to Ukraine.

Biden sought to clarify his remark Monday after he told US forces he was visiting with about the strength of the Ukrainian people amid Russia's ongoing invasion.

“The average citizen, look at how they’re stepping up. And you’re going to see when you’re there, I don’t know if you’ve been there, you’re going to see women, young people, standing in the middle of the damn tank, saying 'I’m not leaving. I’m holding my ground,'" Biden said.

On Monday, Biden explained the comment by saying he was referring to Ukrainian troops who are in Poland.

"We were talking about helping train the Ukrainian troops that are in Poland," Biden said.

Ukraine President Volodymyr Zelensky said he talked to leaders of partner countries on Monday and told them that they need to increase sanction pressure on Russia.

"We agreed with Britain to further support our defense and strengthen sanctions against the Russian Federation. Canada also supports a tougher response from the world to the catastrophe created by Russian troops in Ukrainian cities."

"In a conversation with German Chancellor (Olaf) Scholz, I also paid considerable attention to the need to increase sanction pressure on Russia," Zelensky added.

Zelensky also said, "Italy has agreed to become one of the guarantors of Ukraine's security in the relevant new system of guarantees that we are elaborating.

Zelensky said he thanked the President of Azerbaijan for the humanitarian support provided to Ukraine and informed them about the state of affairs in the territories where Russian troops entered.

Zelensky said he will continue to talk to the leaders and work with international organizations as well.

The US Defense Department laid out the nation’s security priorities for lawmakers in the classified National Defense Strategy on Monday, focusing on the threats from China and Russia.

The Pentagon delivered the document to Congress, and it details the “multi-domain threat” from China, as well as the “acute threat” posed by Russia, according to a DoD fact sheet about the National Defense Strategy (NDS).

The NDS was prepared in coordination with the Nuclear Posture Review (NPR) and Missile Defense Review (MDR) in order to underscore the integration across the services and the domains.

DoD’s top priority is the defense of the homeland, with the People’s Republic of China (PRC) pegged as the top pacing challenge. The PRC is described as the “most consequential strategic competitor,” according to the fact sheet.

The other top priorities for the department are to deter strategic attacks, deter aggression while being ready to succeed in conflict when necessary, and to build a resilient Joint Force.

DoD will also manage other persistent threats, such as North Korea, Iran and violent extremist organizations, according to the fact sheet.

"I like the statement of President Biden which was very impressive," said Zhovkva, the Deputy Head of the Office of the President of Ukraine.

Today, Biden reiterated he was not announcing a change in US policy when he made the remark. “I just was expressing my outrage," Biden said.

"But again, it's no use to speculate whether [Putin is] still in power or not," Zhovkva said. "If Russia would become a democratic country, he would not probably stay in power. But since Russia is far away from democratic country, unfortunately we all have to witness probably, for some period of time, him being in power."

Zhovkva's comments came as part of an interview with CNN's Wolf Blitzer, during which he said the country doesn't plan to lose any territory to Russia, but could amend that position should it quickly bring the conflict to an end.

"The general position is we do not trade any inch of Ukrainian territory, but yesterday my President acknowledged that in order to immediately stop the war and to have an immediate cease-fire and immediate withdrawal of Russian troops, we are ready to agree to withdraw Russian troops to their positions they had before February 24th," said Zhovka.

On the topic of recently surfaced video showing what appear to be Ukrainian soldiers shooting men who are apparently Russian prisoners in the knees, Zhovkva disputed the footage's authenticity.

"This video has already proved to be a fake," he said, adding "Ukraine is a civilized country, unlike Russia, and we will be treating any war prisoners according to international law, unlike Russians who are treating Ukrainian civilians awfully ... Ukraine will never be such a barbaric country as Russia."

According to a British embassy statement, Smeath said, “They are expected to deploy more than 1,000 mercenaries, including senior leaders of the organisation, to undertake combat operations.”

Smeath added, “Due to heavy losses and a largely stalled invasion, Russia has highly likely been forced to reprioritise Wagner personnel for Ukraine at the expense of operations in Africa and Syria.”

Last Tuesday, a senior US defense official told reporters the Wagner Group is “active” in Ukraine.

The Ukrainian general staff said its forces "continue to maintain the circular defense" inside the port city of Mariupol, even as Russian forces consolidated control around the city.

The announcement came shortly after midnight on Tuesday.

Mariupol Mayor Vadym Boichenko said earlier Monday that the city was "in the hands of occupiers," as evacuation corridors from the city have been surrounded on all sides by Russian forces.

Boichenko called for "a complete evacuation" of the remaining citizens from the battered city. Ukrainian officials say 90% of the residential buildings in the city have been damaged or destroyed during the heavy fighting of the last month.

A source close to the Ukrainian negotiation team tells CNN’s senior international correspondent Matthew Chance that there was an incident "a few weeks ago" during Ukraine-Russia talks in Turkey in which Russian billionaire Roman Abramovich along with two Ukrainian negotiators suffered minor skin peeling and sore eyes, the source adding the incident was not regarded as serious.

A source close to the Office of Ukraine’s Presidency speaking to CNN on condition of anonymity said of poisoning reports, “This is not true. Just another case of disinformation.”

A spokesperson for Abramovich would only say “No comments from us, thank you”, when contacted by CNN on Monday.

Abramovich, who was sanctioned earlier this month by the UK government along with other Russian oligarchs following Russia’s invasion of Ukraine, has been acting as an intermediary between Russia and Ukraine, shuttling between Moscow, Kyiv, Istanbul, Warsaw and beyond amid a whirlwind of talks aimed at ending the conflict, his spokesman confirmed last month.

On Feb. 28, Abramovich’s spokesperson said “I can confirm that Roman Abramovich was contacted by the Ukrainian side for support in achieving a peaceful resolution, and that he has been trying to help ever since. Considering what is at stake, we would ask for understanding as to why we have not commented on neither the situation as such nor his involvement.”

Abramovich’s role as interlocutor in Russia-Ukraine talks is not in an official capacity. He is not acting as part of a Russian delegation or as a Russian mediator.