The decision followed the draconian "Fake News" law the Kremlin enacted, effectively making it a crime to report the truth about the war in Ukraine. But the husband-and-wife team behind the channel said they're not deterred.

"You are facing up to 15 years in prison if you call this war a war, if you are quoting President Zelenksy," Kotrikadze said on CNN's "Reliable Sources" Sunday. "If you are reporting the truth, so we did not have any choice."

Right now, TV Rain content is mainly found on its YouTube channel. Despite government efforts to control access to information, Dzyadko said, TV Rain’s livestreams are being viewed by many Russians. 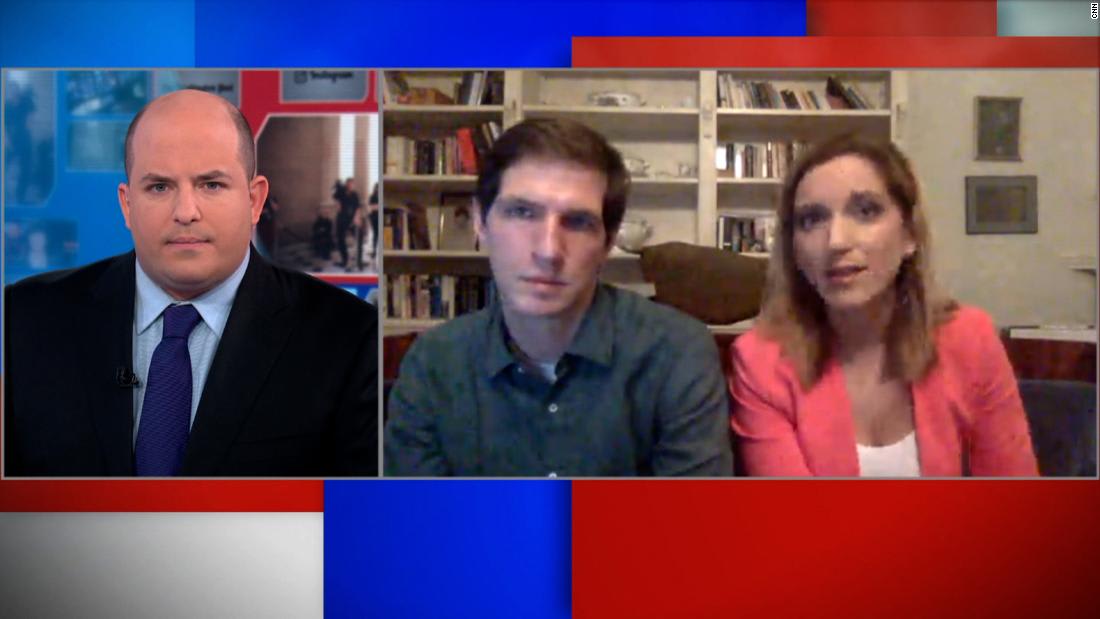 The number of Ukrainian refugees that have arrived in France has reached around 30,000, according to Housing Minister Emmanuelle Wargon.

Speaking to French broadcaster Franceinfo on Sunday, Wargon said about half of the refugees are passing through France to Spain and Portugal, but France is getting ready to house more refugees.

"Our goal is to be able to accommodate around 100,000 as quickly as possible," Wargon said.

Peace and the restoration of normal life are the "obvious" goals of Ukraine as the country enters into a new round of talks with Russia next week, said Ukrainian President Volodymyr Zelensky on Sunday.

Speaking in a video message posted to social media, Zelensky said as a new round of face-to-face negotiations kick off Tuesday in Istanbul, Ukraine is looking for peace "without delay."

"Our priorities in the negotiations are known," Zelensky said. "Ukraine's sovereignty and territorial integrity are beyond doubt. Effective security guarantees for our state are mandatory. Our goal is obvious: peace and the restoration of normal life in our native state as soon as possible."

During a Sunday call with Russian President Vladimir Putin, Turkish President Tayyip Erdogan emphasized the need for ceasefire in Ukraine "and peace between Russia and Ukraine as soon as possible," according to the Turkish presidency.

US President Joe Biden told reporters Sunday he was not calling for regime change in Russia in his off-the-cuff remarks a day earlier.

"No," Biden said, in response to a shouted question from a reporter in the press pool asking if he was calling for regime change.

The question stemmed from Biden's comment Saturday at the conclusion of an address delivered outside the Royal Castle in Warsaw, Poland.

Other Biden administration officials have sought to walk back and clarify Biden’s comment.

"The president's point was that Putin cannot be allowed to exercise power over his neighbors or the region," a White House official said. "He was not discussing Putin's power in Russia, or regime change."

“More and more missiles every day. Mariupol under the 'carpet' bombing,” he said.

“Russia no longer has a language, humanism, civilization. Only missiles, bombs and attempts to wipe Ukraine off the face of the earth,” he said.

Video has surfaced showing what appear to be Ukrainian soldiers shooting men who are apparently Russian prisoners in the knees during an operation in the Kharkiv region.

On the almost six-minute-long video, the Ukrainian soldiers are heard saying they have captured a Russian reconnaissance group operating from Olkhovka, a settlement in Kharkiv roughly 20 miles from the Russian border.

Asked about the video, a senior presidential advisor, Oleksiy Arestovych, said in an interview posted on YouTube Sunday: "The government is taking this very seriously, and there will be an immediate investigation. We are a European army, and we do not mock our prisoners. If this turns out to be real, this is absolutely unacceptable behavior."

In a separate briefing, Arestovych said, "We treat prisoners in accordance with the Geneva Convention, whatever your personal emotional motives."

CNN has reached out to the Ukrainian Defense Ministry for comment. In response, the ministry sent CNN a statement from the Armed Forces chief, Valerii Zaluzhnyi. The statement did not refer directly to the incident, but said, "In order to discredit Ukraine's defense forces, the enemy films and distributes staged videos showing inhuman treatment by alleged 'Ukrainian soldiers' of 'Russian prisoners.'

"I emphasize that servicemen of the Armed Forces of Ukraine and other legitimate military formations strictly adhere to the norms of international humanitarian law," Zaluzhnyi said. "I urge you to take into account the realities of informational and psychological warfare and trust only official sources."

It's unclear which Ukrainian unit may have been involved. The soldiers speak in a mixture of Ukrainian and Russian with Ukrainian accents.

The video comes as Ukrainian forces make gains east and south of Kharkiv. CNN geolocated and verified a long video uploaded on a Telegram Saturday showing a successful assault by Ukrainian troops of the Azov Battalion, in which they took a number of Russian prisoners in a rapid assault on Olkhovka, also known as Vilkhivka.

Some of the prisoners were stripped and blindfolded.

That video was posted by Konstantin Nemichev, a Kharkiv regional official who took part in the attack on Olkhovka. He told CNN he was not associated with the footage that emerged showing Ukrainian troops kneecapping Russian prisoners.

“This is not our location … I have not seen such a location,” he told CNN on Sunday.

He suggested the video was shot “maybe somewhere in the [Kharkiv] region.”

In the first response from Russian authorities, the chairman of the investigative committee of the Russian Federation, A.I. Bastrykin, said an investigation would be launched "to establish all the circumstances of the ill-treatment of captured soldiers by Ukrainian nationalists."

In a statement, Bastrykin said: "Footage appeared on the Internet in which prisoners were treated with extreme cruelty by Ukrainian nationalists. The video circulating online shows captured soldiers, being shot in both legs and not given medical assistance. According to some reports, illegal actions took place at one of the bases of the Ukrainian nationalists in Kharkiv region."

CNN is not showing the video.

A loud explosion followed by sirens were heard in Kyiv early Monday (Sunday ET), according to CNN teams on the ground.

Ukrainian President Volodymyr Zelensky has refused to sit down with Russia's negotiators if they seek to solely discuss the "denazification" of Ukraine.

Speaking with independent Russian journalists on Sunday, Zelensky said Ukraine is not discussing the terms "denazification" and "demilitarization" at all during talks with Russia.

Russian President Vladimir Putin has continuously framed his invasion of Ukraine -- a country with a Jewish president -- as a campaign of "denazification," a description dismissed by historians and political observers alike.

"We won't sit down at the table at all if all we talk about is some 'demilitarization,' or some 'denazification.' For me, these are absolutely incomprehensible things," Zelensky said.

A previous meeting during which the Ukrainian side told their Russia counterparts not to use these terms did not prove "substantive at all," Zelensky added.

As the next set of talks between the two sides are set to kick off in Istanbul on Tuesday, Zelensky said he is "not against" conversations with Russia "as long as there is a result," adding he had advocated for dialogue even before the war started.

Everywhere is a target, and anyone can be a victim, it seems, but a few hundred families believe they’ve found the safest place in Ukraine, tucked away in the Carpathian Mountains.

The remote urban settlement of Slavsko is a popular ski destination for locals, but as spring melted its snow-capped peaks and Russian troops invaded the country’s east, a lucky few found solace in the slopes.

Many of the hotels welcomed the families, offering a handful of rooms for free and others at discounted rates. Staicy Chernilevskaia, who fled with her partner Ramir Holubov from Kharkiv, is among 50 people staying at the Karpatsky Zatyshok hotel.

“It’s mind boggling when you look at these mountains and read the news," Chernilevskaia said. "It seems like it’s not real.”

The couple’s families are still in Kharkiv where Russian artillery consistently strikes residential areas, according to Ukrainian officials.

“You are here, you are safe, but you feel guilty,” Holubov said.

After a terrifying week spent sheltering in the car park of their apartment block in Kyiv and two failed escape attempts, 12-year-old Diana Kovalyova and her mother finally squeezed onto one of the overcrowded trains leaving the capital.

But they didn’t know where to go until they remembered a family trip one summer to the ski resort.

“We had good memories here,” said Larysa Kovalyova, Diana's mother. “The people were kind and we knew they would take care of us.”

Situated in a valley between two rivers, the idyllic town has one small gold-domed church and little interest to Russian firepower that has targeted military infrastructure and urban centers.

“I feel safe here and also the view is perfect," Diana said. "I like it so much, but I hope the war is over soon and we can go home because living at home is still much better."

The town now hosts about 3,400 internally displaced people, nearly doubling its population, but the mayor says it’s not a burden. The community wants to share its mountain sanctuary.

“We think that it is our duty to host people who were thrown out of their homes by the war,” Mayor Volodymyr Beha said. “We feel a responsibility to make them warm and comfortable.”

Some are staying in less traditional accommodations. Olesya Matiushenko found peace for her two children in a glamping pod perched atop the mountains.

“My daughter wakes up every morning, opens the curtains, wipes the dew from the windows and says, ‘Mommy look!’” Olesya said with a smile as she looks out at her stunning view.

“It’s calming here," she said. "I feel lighter. And I start to believe everything will be okay.”